We dug out the old bird feeder from last year and hung it from a pole attached to the patio. My husband put peanuts in shells in the centre of the feeder and a suet block down the side cage facing the patio door so we could watch the activity around the feeder.

As I hung the feeder from the pole, two of the neighbourhood crows were flying overhead. They saw me and by the time I was back in the house with my camera in hand, crows were on the patio rail.

These are the neighbourhood crows I have to fend off when it comes to the grapes I grow around the patio support poles. While the trees in our backyard are not mature, several doors up, mature trees are full of crows on occasion. The murder misses nothing that goes on in the neighbourhood. They also spread the word. Before long four crows were lined up on the railing, waiting for a turn at the feeder. 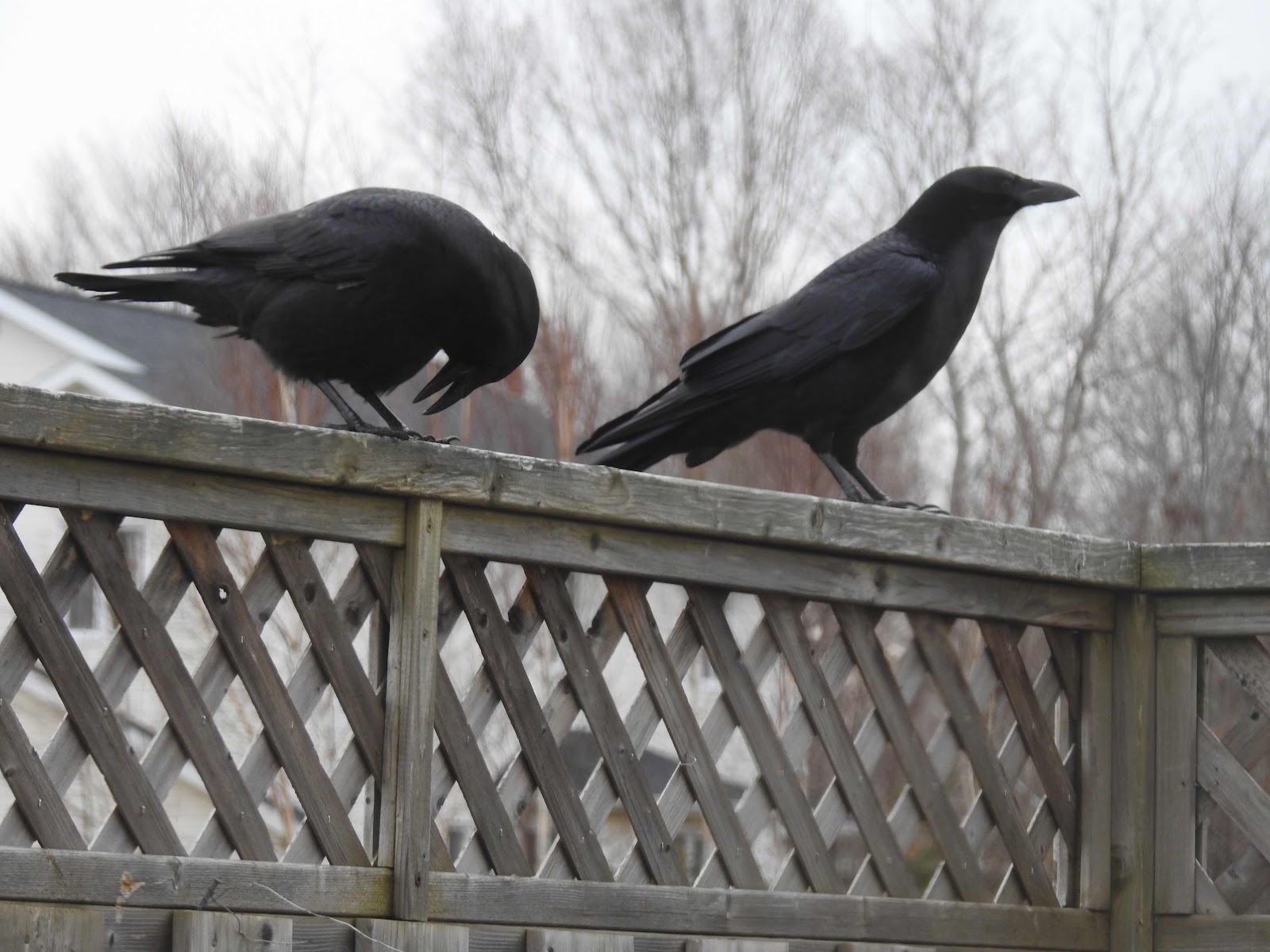 There are crows which live along the boardwalk where we walk regularly. We have never seen them show interest in the peanuts people leave for the squirrels and birds. However, the neighbourhood crows were interested in the peanuts in our feeder. The only problem was the swaying of the feeder from the slight breeze or their touch. When the feeder moved towards them, the birds flew off or moved away.

Over a few hours, the crows learned to resist their fear and grab the peanuts, not just one either. 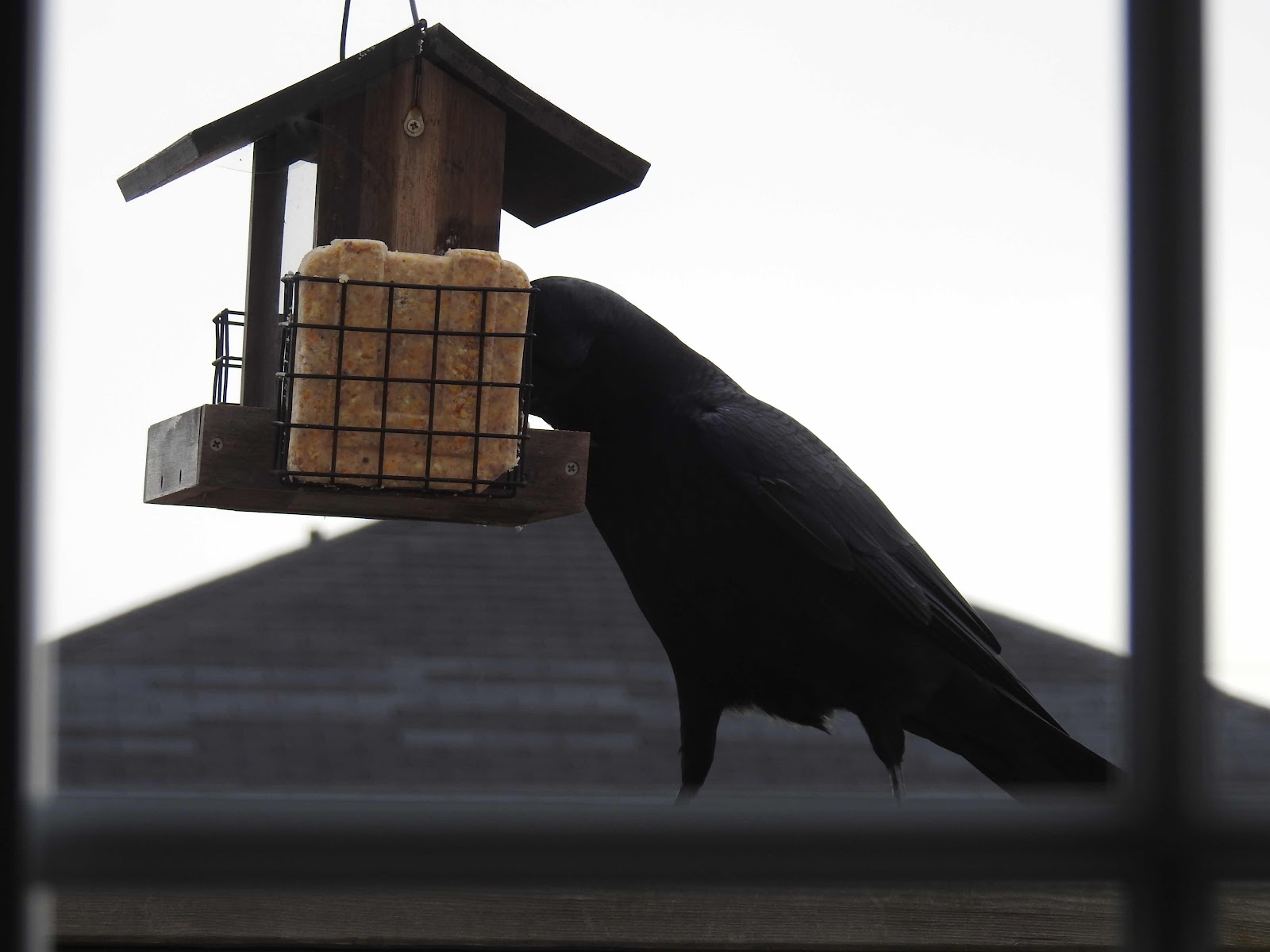 They often took as many as four and flew off with them. It looked like they swallowed some, shells and all, and took two in their beaks. We couldn’t tell the birds apart so as to know how long it took an individual to eat or store the peanuts and return. 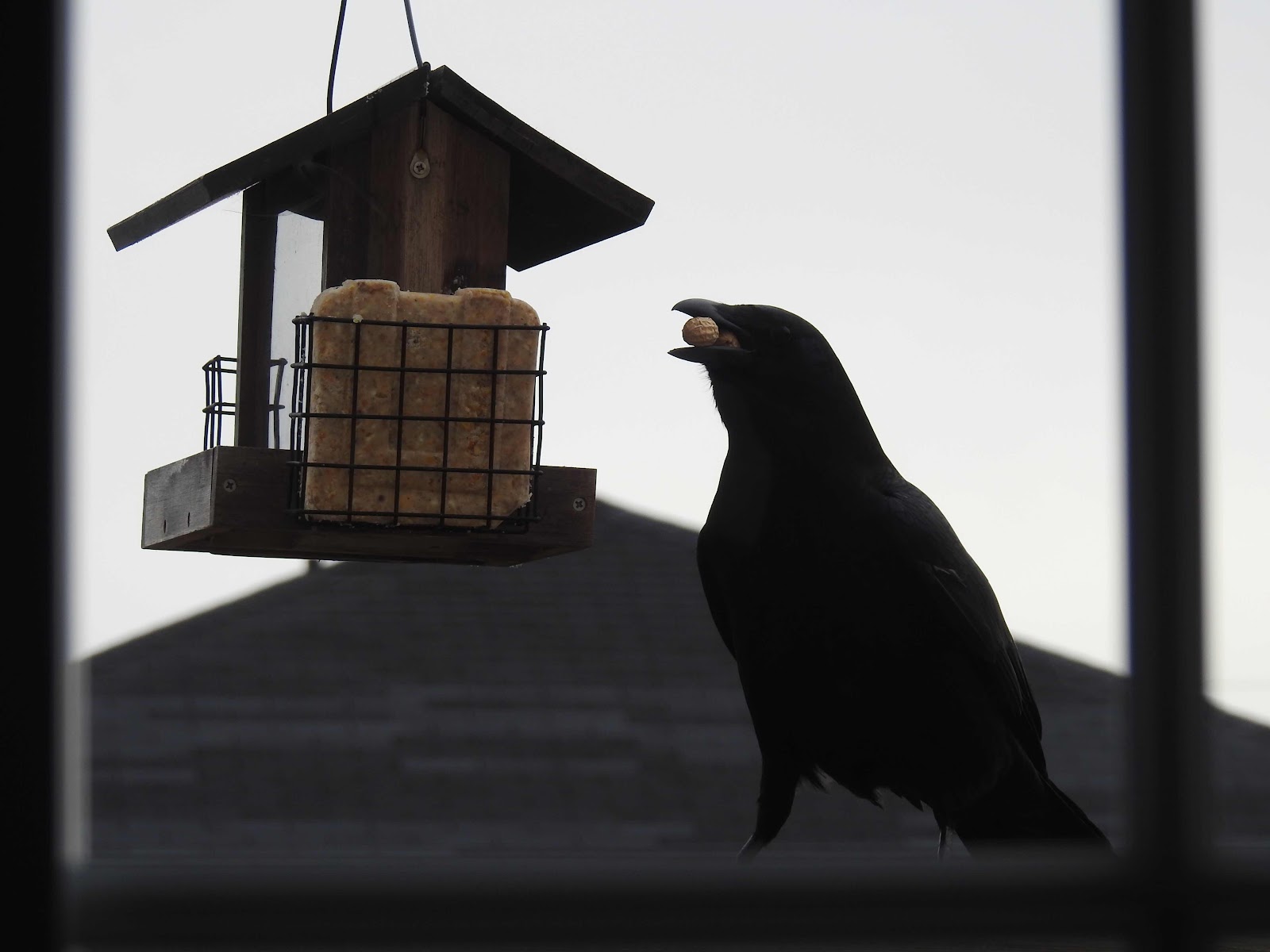 The suet, which they love is another story. The location of the suet basket made it hard for the crows to eat. It dangles over the deck. Meanwhile, Blue Jays, which also happened by, had no trouble landing on the swinging feeder. 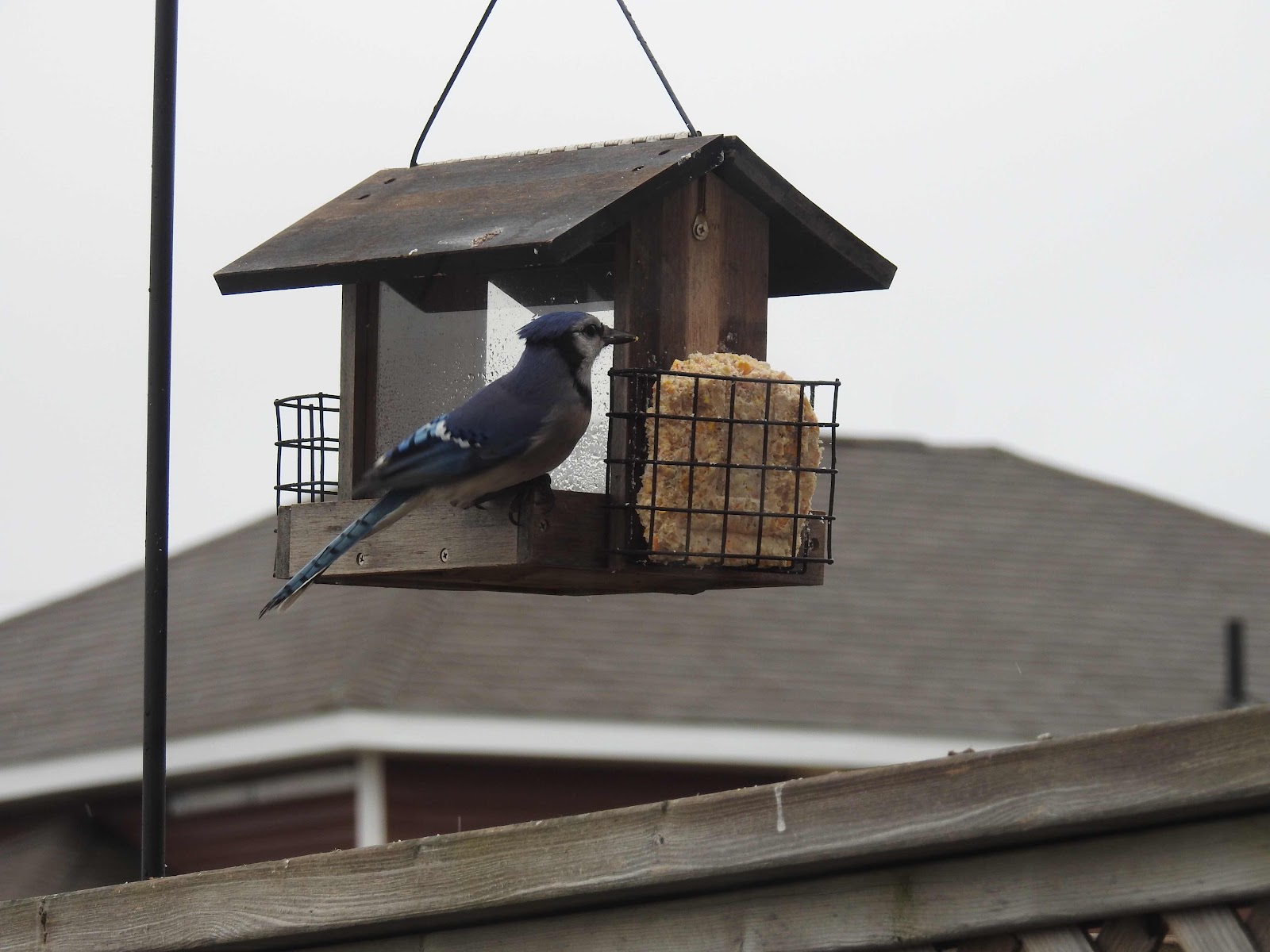 The larger crows couldn’t manage at all. However, they didn’t want the jays around either. The jays obliged. 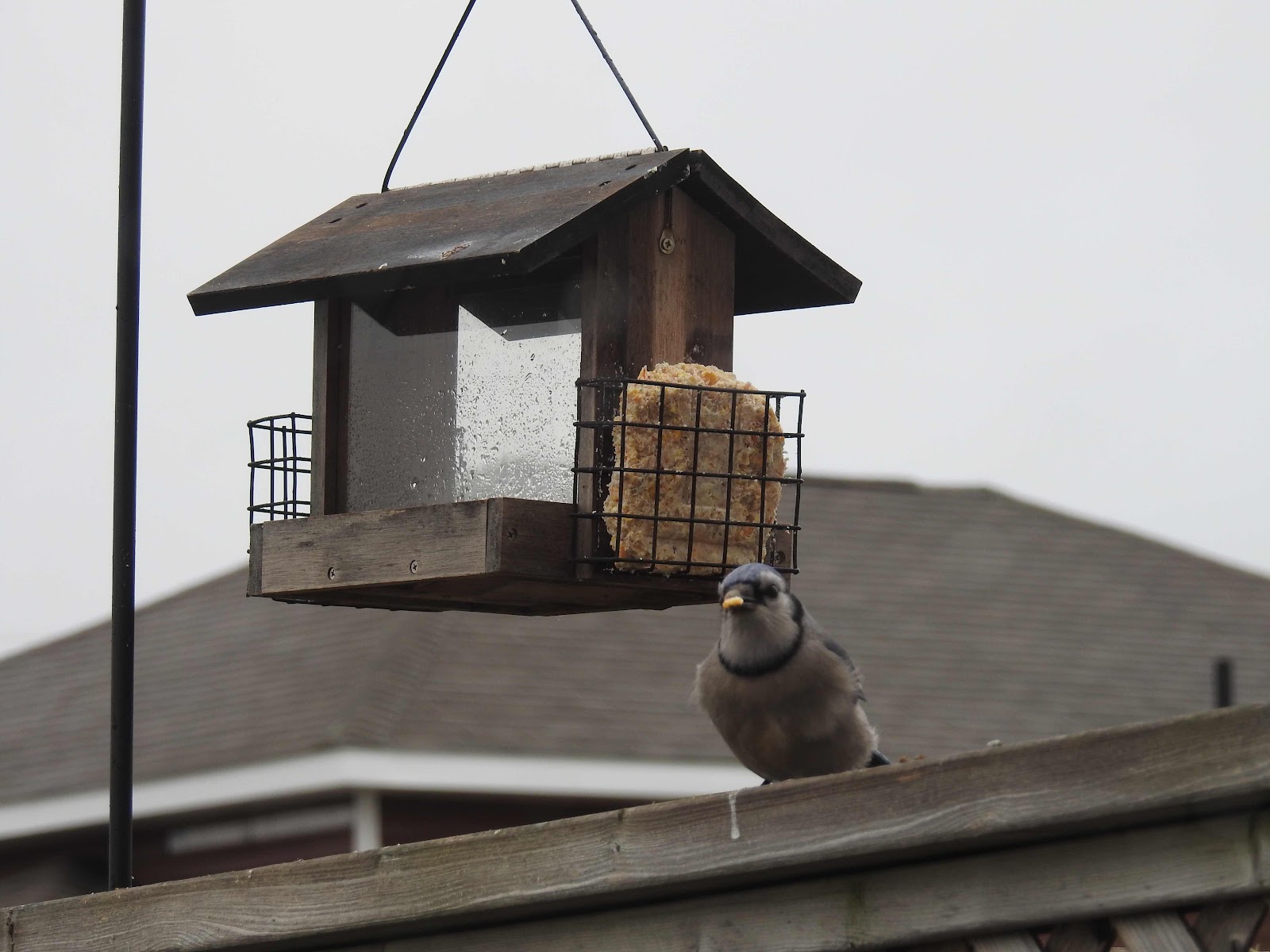 We watched as a crow landed on either side of the railing, tipping its head to the side, as if sizing up how to get the suet. One crow tried to land on the side of the feeder, tipping it almost horizontally. The bird flew off.

Another time, a crow landed on the suet basket but couldn’t manage to eat the suet as its large body covered it and the feeder was tipped. When it flew to the railing, it ate the suet off its claws which it picked up during the attempt.

Crows are smart so I look forward to seeing how they solve this dilemma. Meanwhile I feel bad for the jays who didn’t get much of anything from the feeder thus far.

We also had the neighbourhood flock of starlings visit the backyard and ten or more came onto the railing. Their frenetic demeanour is almost overwhelming to watch. They only stayed seconds.

And the story continues...

You're going to have a Crows versus Blue Jays civil war in your backyard! And wait 'til the squirrels show up!

I did not know that crows came to feeders.

I love watching the birds that come to our bird feeder. But in our case, the squirrels often get more than the birds!

I love the birds that come around to our bird feeder, but I have to admit that our squirrels are very aggressive and often get more than the birds.

I bet this is fun to document. I would love watching. In Terre Haute, you would not believe the crows...I am not sure about the situation now, but they were a real problem. If you happened down this one street at dusk, you would think you were in the movie The Birds.

That being said, on youtube there are videos about Fable the Raven...they are long, so I never post one to my blog. But you just might enjoy them as much as me.

Some interesting visitors you have there. it will be fun to see if the crows solve the problem.

I'd not be able to be calm, when nastiness was going on, at the feeder. -grin-

Pecking order isn't an empty phrase is it?
I look forward to seeing more in this series.

No crows here but the Blue Jays get their crop full, their neck swelling, and then the songbirds can feed!

I would love to have a bird feeder like that one, but it would be difficult for me to find a place to hang it so that it would be inaccessible to the many treerats that live around here. Those naughty squirrels are everywhere.... on my deck every morning hoping for a handout.
Love the pictures of your crows.... so big and black and noisy.

I have had lots of different birds at my feeders, but I have never seen a crow at them,

You got some great shots. I love watching the birds at my feeder. Crows are definitely smart birds!

Bird feeders ae a rare sight here, If we did have them, out small, Noisy Miners, would dominate and I'm almost sure they would drive all the other birds away.
Such a lovely read.

Bird entertainment can be addicting to watch especially the Crow Channel. :)

They certainly are fun to watch.

Crows are incredibly enterprising. I look forward to hearing how they will manage to snag that suet. A dumpster downtown that is near a pizza place is often covered by crows if the cover gets blown off, giving them a feast and scattering pizza boxes all over! :-)

It always amazes me how when I go out with food in the morning there is not a bird in sight, but by the time I return to the house there is a cloud of birds overhead and many already in the trees! Keep safe and have a good weekend Diane

Our crows leave for the winter. It's pleasant not to have them as they have learned to live in town.

I always saw bluejays as the ground clean up crew and crows just couldn't be bothered with the yard, full of feeders big birds couldn't use.

I understand that crows are a pretty smart bird. I loved having a bird feeder in my townhouse. Now in the condo it is not encouraged. We have a lot of barn swallows around - a barn is located across the street - they they nest in areas we don't like - like drier vents and on top of outdoor sprinkler heads.

It's wonderful to share your days with these intelligent birds, Marie. Occasionally a crow or two will land in my yard and gather up spillage from the feeders, but their visits are quite infrequent. They are welcome any time! Blue Jays, however, are here every day.

Hi Marie, It is early Saturday morning, still dark and 33 degrees outside here in Seattle. My usual morning routine is underway with my first cup of dark brew coffee and a look at the World Wide Web. Today, I decided to start by taking a look at some of my favorite blogs. I sure enjoyed your story, “At the feeder.” Excellent observations. As I was reading your post I kept thinking about the similarities of the way my hummers defend the feeders. They are so territorial. And that has led me to be more aware of other birds having the same behavior. This part of your post was so perfect … “The murder misses nothing that goes on in the neighbourhood. They also spread the word. Before long four crows were lined up on the railing, waiting for a turn at the feeder.” These birds really are smart and without doubt have a way of communicating with each other. Very neat post and I enjoyed the photos. Thank you, as always, for sharing. John

Y'all have an interesting backyard feeder. The way crows are smart, I won't be surprised if they find a way to carry off the suet block. I like crows and bluejays. Not easy to chose a side. :)

i have never attracted crows at my feeders, but everyone has to eat, right!?!?

What a good idea Marie, it's fascinating to watch the antics of birds, I love watching them in my back garden. I believe crows are the smartest of birds, the most annoying also 😉

I've never seen a blue jay! How pretty.
Around here magpies cause the trouble. Nasty birds. Robins are very territorial and chase other birds off but they're not as evil as magpies.

You were kept entertained for a while...

Just stopping by again to say thank you for your comments on my blog. I always look forward to hearing from you. Have a good day and a good week ahead. John

How marvelously entertaining. I would have pulled up a chair and wielded my camera just like you did. Delightful.

It is fun watching the feeders, the crows are piggies. I have seen them grabbing as much as they can fit in their beaks. The Jays must have been upset to miss some of the food. My Jays love the peanuts in the shell. Have a happy day!

such marvelous images dear Marie :)
i enjoyed so much looking at crow struggle with feeder you hung up with pool in patio and yes it hurts when smaller birds are pushed and scared away by clever crows ,i used to see such views back when mom would put left over rice or grains in huge plate and place it for birds on shade before door ,or on edge of yard ,crows would behave same all the time ,i would invent ways to so other can find the chance