It was overcast as it has been much of this winter. My husband and I were eager to go for a walk and wore layers of clothes against the -8 C temperature. However the windchill of -18 C made me put my hood up over my hat too. It was so cold!

The temperatures may have finally turned cold enough for the harbour to freeze this winter. It is late this year, usually happening before mid December. While there is some ice in the harbour, the deep freeze has been missing. 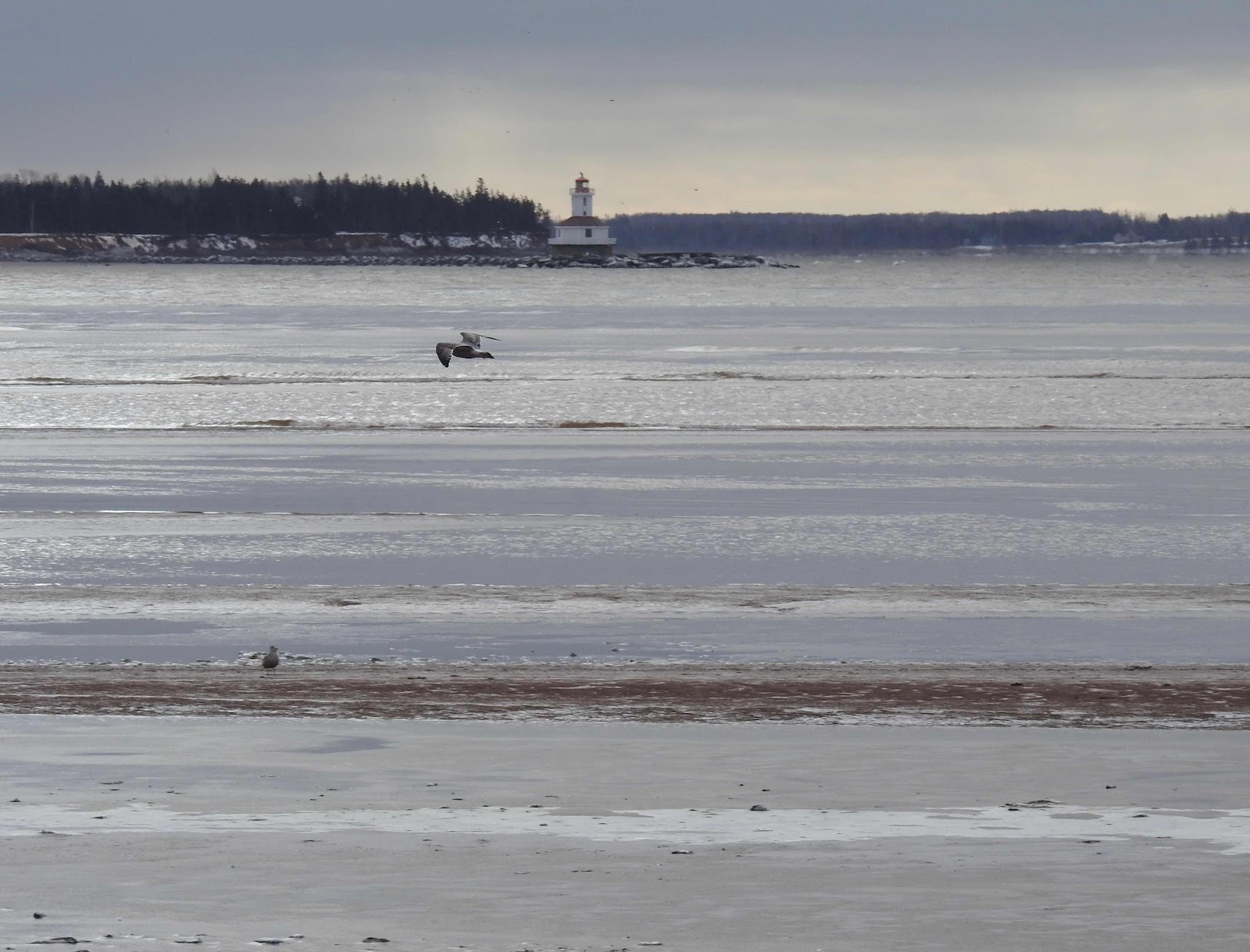 In the photo, you can see the ice with the blue areas of running water in between. These areas of open water are unusual for the second half of January.

A Blue Jay paused just long enough for me to take a photo. The rose hips stand out amid the grasses and make the blue in the jay bluer somehow. 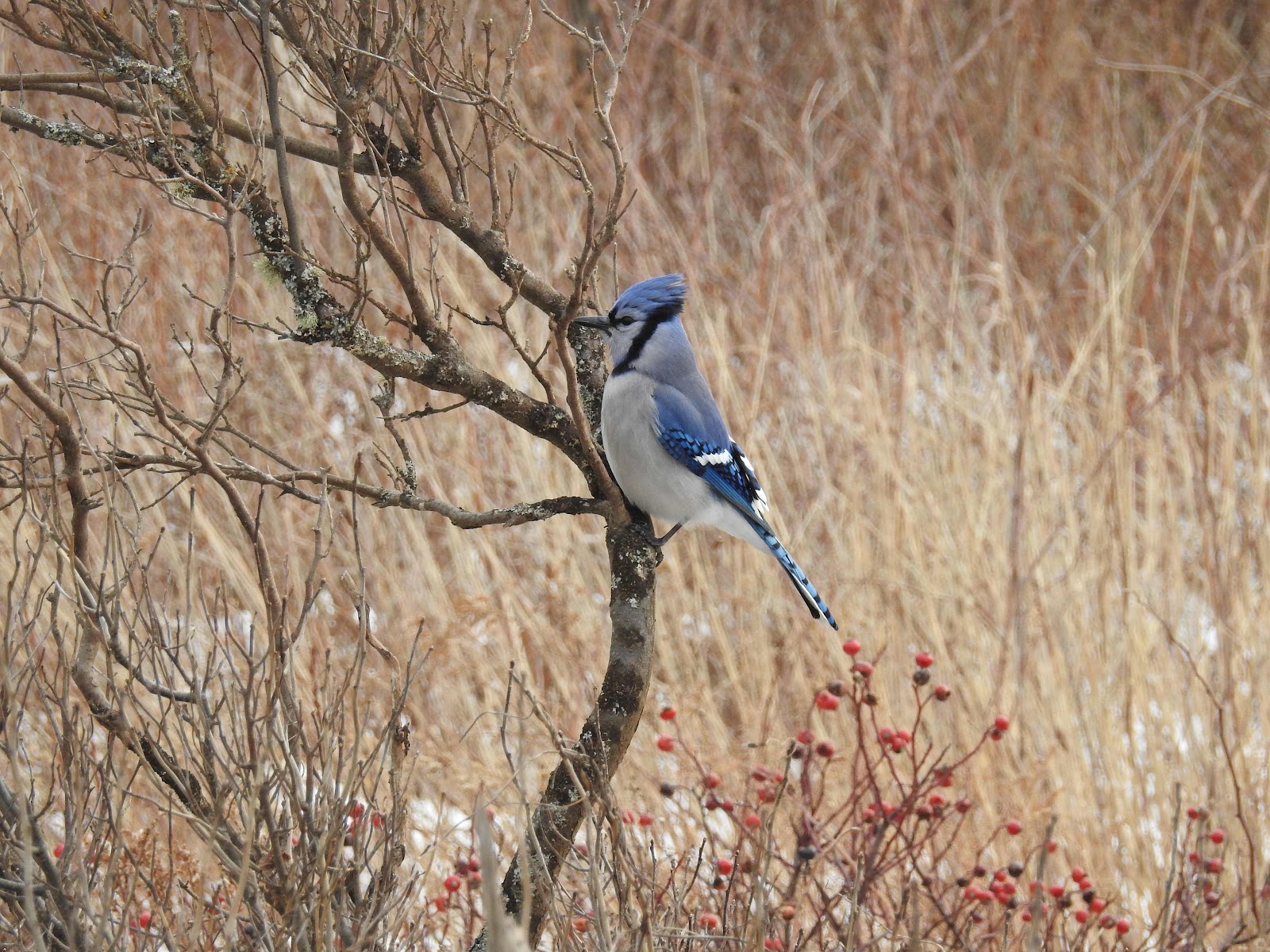 A young gull stood along the shoreline for the longest time. I wonder if what looks like ice hanging down from its feathers had anything to do with its stationary position. 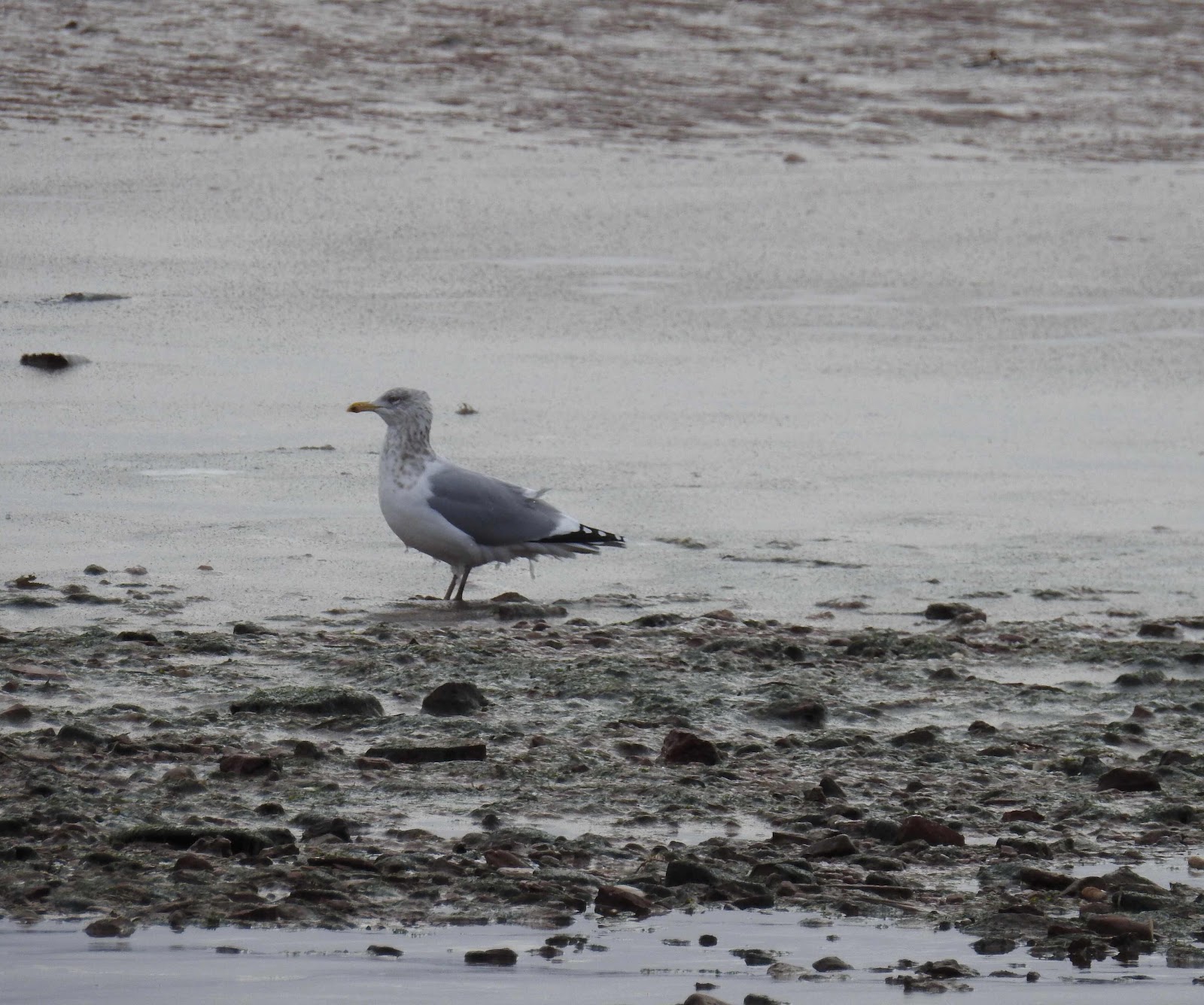 There is but one last section of open water in the stream which means the Black Ducks which live in the area have moved to open water in a nearby river. 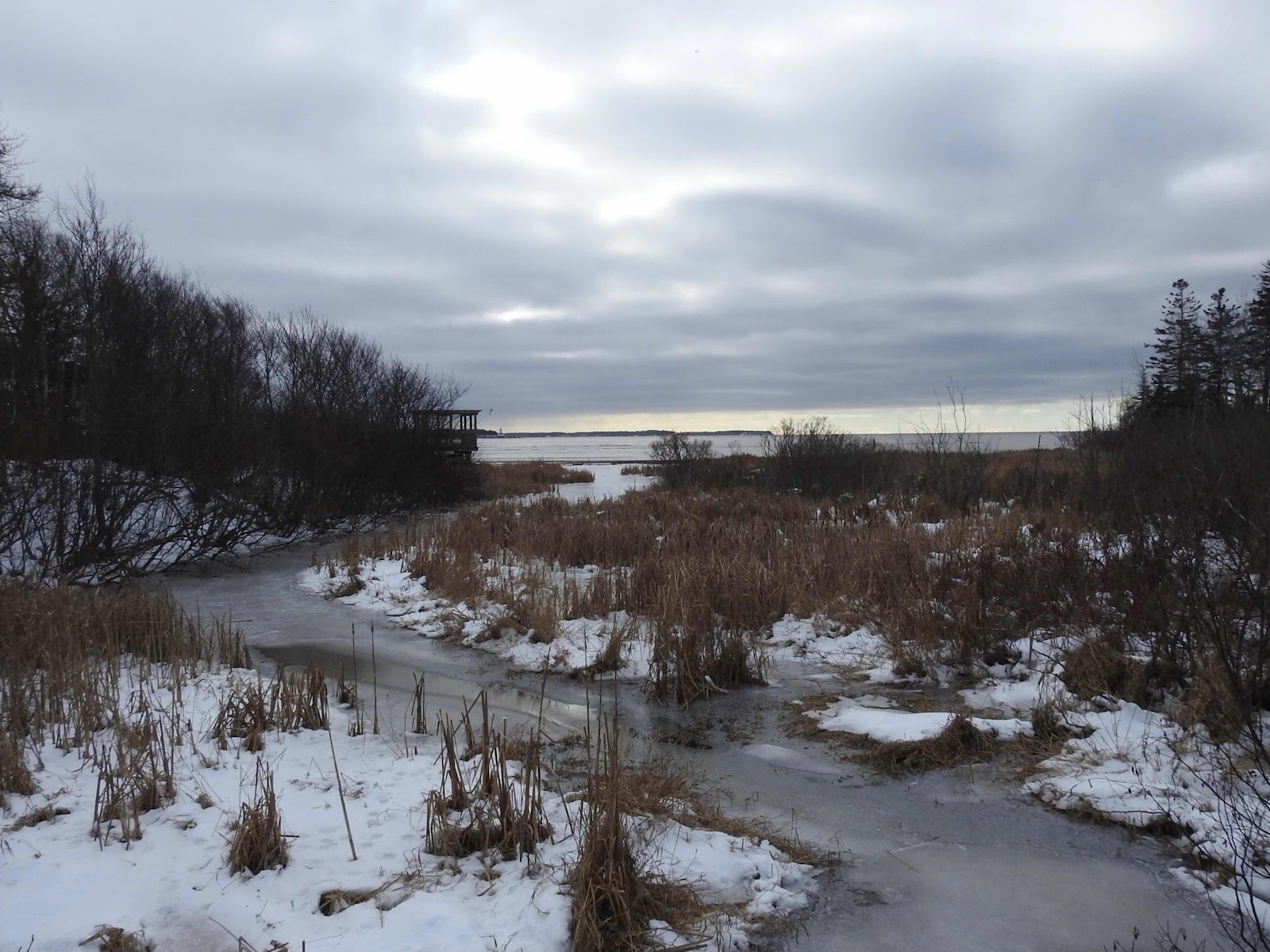 This is the best photo I could manage of a Dark-eyed Junco which was hopping around on the walkway, feeding on the birdseed left by residents. While I have seen juncos before, I have never seen them along the boardwalk. 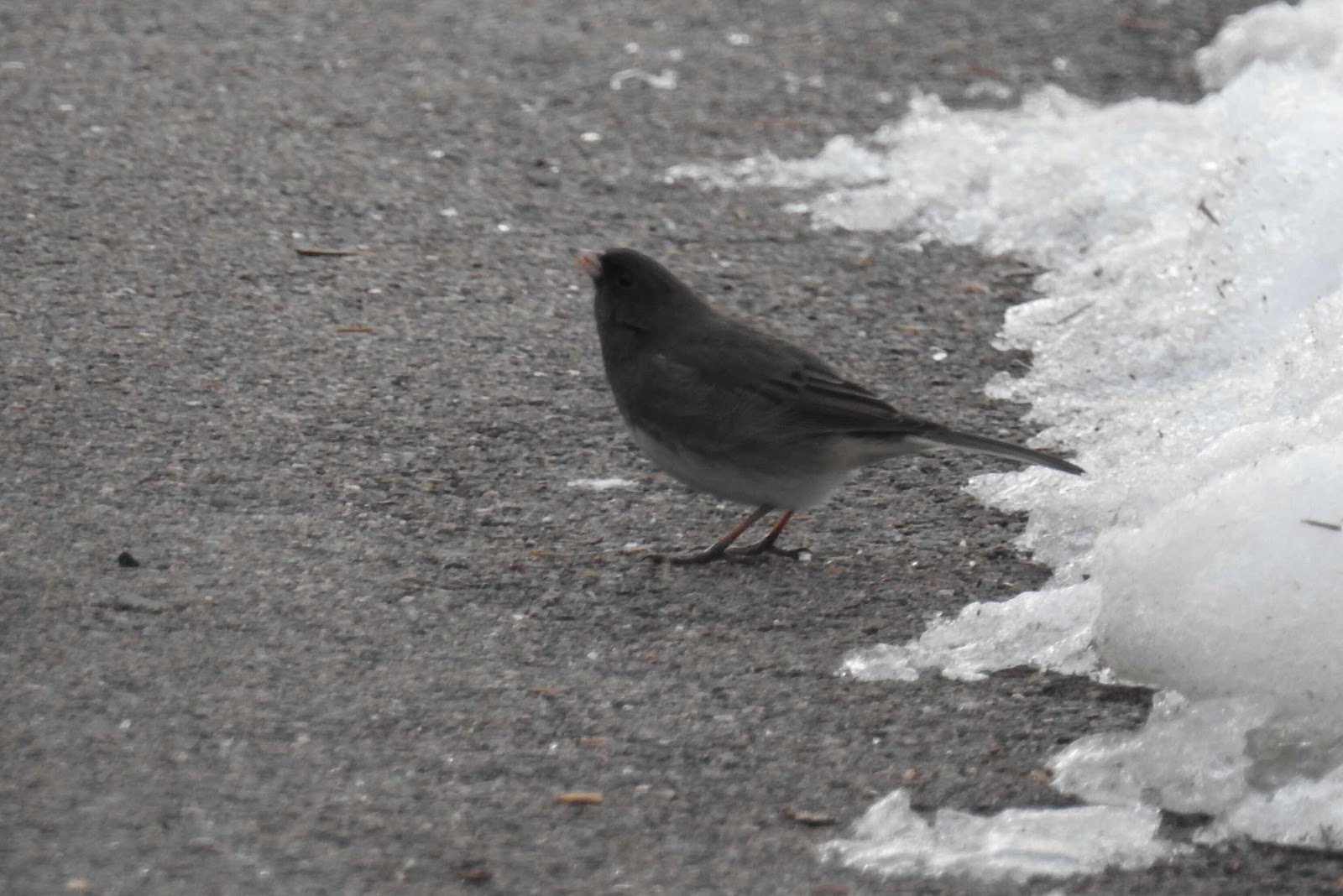 I missed the opportunity to photograph a Tree Sparrow a few days ago. This is a new bird for me and it was interesting to watch it on the ground, as it picked at the seed which had blown off the bridge.

The squirrels were busy at the base of a bird feeder. Those little animals looks so cute though they can be aggressive with each other where food is concerned. Understandable for sure! 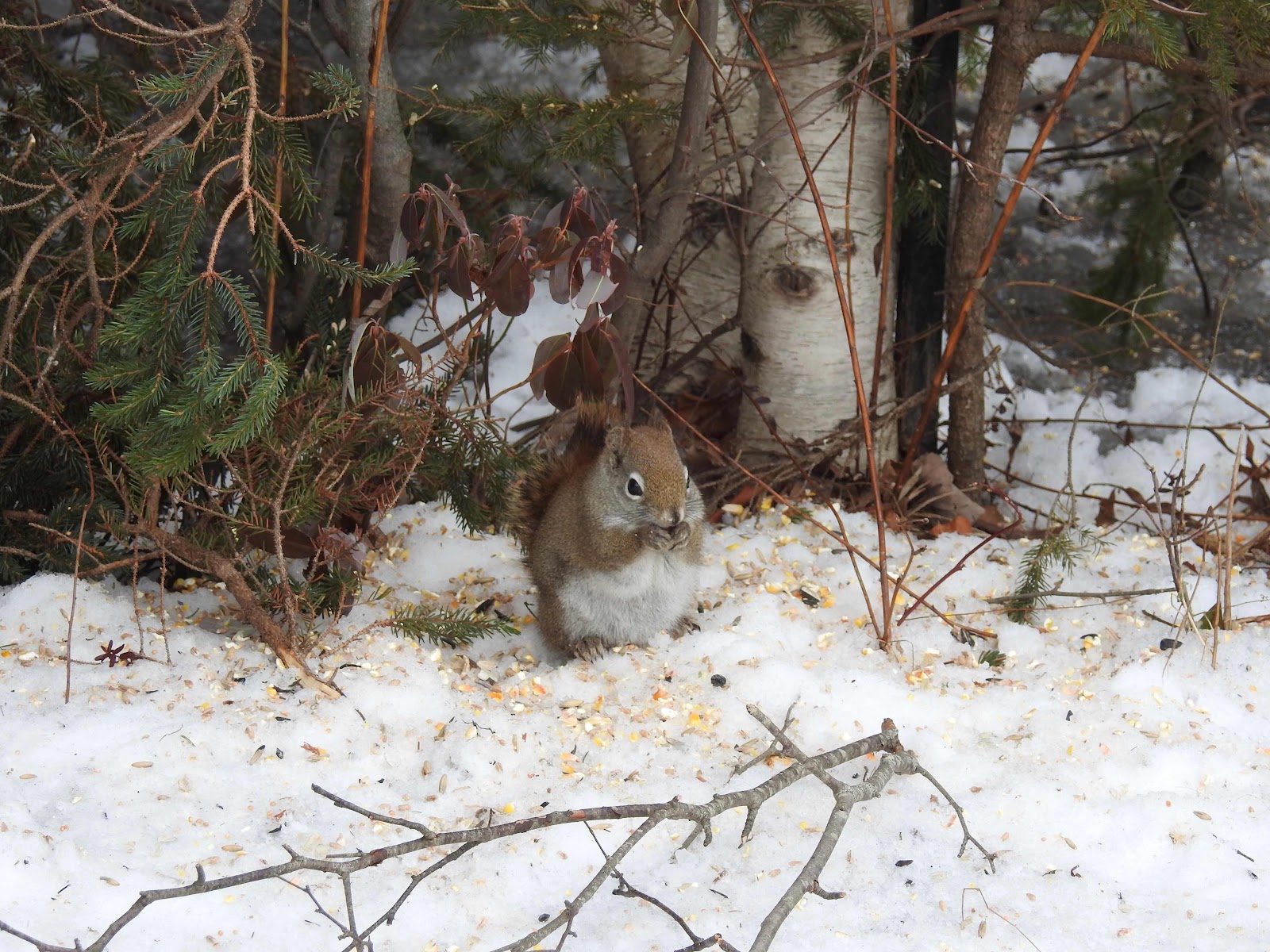 I always feel encouraged when I see beams of light through the clouds on a cold grey day. 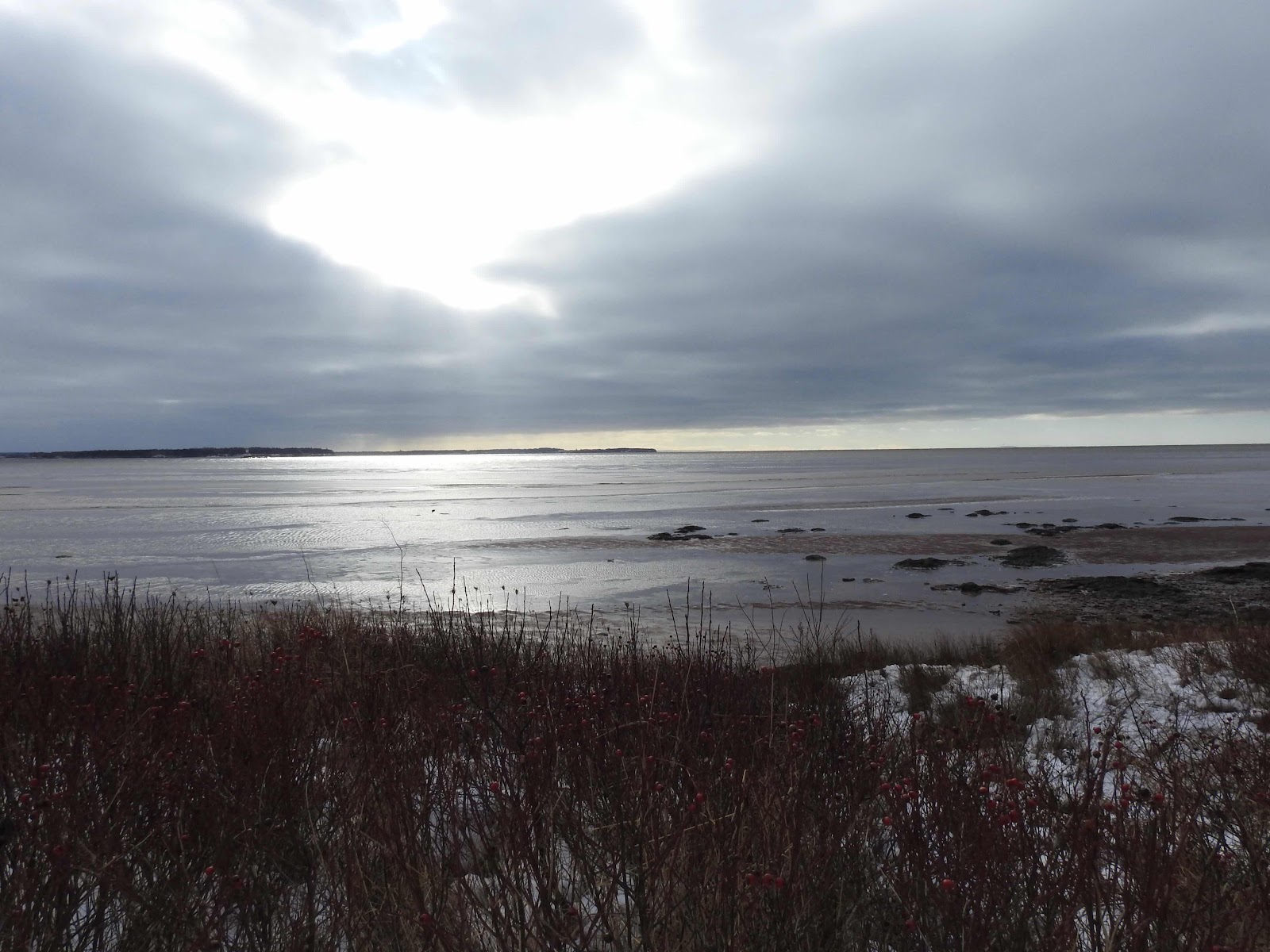 Such lovely photos ... it's impossible to choose my favorite so I'll choose the little Junco who looks like he could use a little special love.

What a handsome blue jay!

Gorgeous photos Marie. My favorites are the beautiful Blue jay and the sweet little squirrel. Stay bundled up and nice and warm!

ooooh these images are great!! i love the blue jay and the junco!! thanks for braving the cold to capture these, i hope you enjoyed the walk!!

Great photos. I cannot handle wind at all and a cold wind is worse. Despite wearing wrap-around glasses the wind just makes my eyes stream and trying to take photos is so difficult to focus.
Keep safe Diane

Thank you for taking us with you on a very, very beautiful walk - despite the chill.
We are ramping up to be HOT for the next few days. A heat which like your freeze is arriving later than usual.

That patch of light did look a bit like a dove descending.

Beautiful photos especially the last one. Squirrels want their fair share or else. :)

Wonderful, wonderful pictures. I especially love that first one, bird and lighthouse. :-)

The squirrel is a definite cutie.

Lovely pictures but, seriously, how does anything survive? This girl wouldn't.

“That blue jay stood mighty still for you! I like juncos, another of my favorites.”

I couldn’t print the comment for some reason yet known.

Joanne’s blog is at https://cuponthebus.blogspot.com/

Good description of a very cold day but you were tough and got out for a walk.

You did a great job with the photos and descriptions. I feel like I need to put on a sweater. :-) Take care and stay warm!

Thanks for more of your photos and your tour. You live in a fascinating place, I think.

Brrr, that sounds so cold. I'm glad you could still get out for a walk though, and see such interesting things. Stay safe - and warm! :)

Sure is pretty. I guess I am coming wimp and when got home from work I thought it was cold. It was 28f and I seen a lot colder weather.
Coffee is on and stay safe

Always enjoy coming along with you on your walks Marie. Love the view of the lighthouse in first shot and your capture of the bluejay is lovely, what a beautiful splash of blue it creates. Happy weekend to you both ✨

It's always great to have wildlife to keep you company. May I point out that the bird is correctly named a Dark-eyed Junco (Junco hyemalis) not a Black-eyed Junco. Delightful by any name.

Thank you David. As I typed that name, it didn’t feel right, though I had looked up the name just minutes before. A senior moment I guess.

How startling the blue of the jay is. What a wonderful landscape.

The ice and water are beautiful, but brrrr. I'm not used to those temperatures and would need to augment my wardrobe!

blue jay looks so beautiful.... seem that you took the picture from close distance.

Thank you for sharing wonderful photos.

I love your Blue jay photo! The views of the water are beautiful. The squirrel looks cute, they seem to be eating every time I see them. Stay warm! Take care, enjoy your weekend!

Such Wonderful Photos - And On A Cold Dang Day - But Once Again, You Two Prevailed - Outstanding And I Applaud Your Efforts

I always enjoy your photos and descriptions. The blue jay with the rose hips and the squirrel with eating the seeds are my favorites among the winter shots.

Lovely walk you had even if it was cold. The temps are very cold here too, although the sun was shining and we had a pretty sunset. The wind iwas and is still whistling and wailing around this old house off the ocean. I wasn’t as brave as you. I did venture out to feed my wildlife friends though. I took pity on them. ❤️-

I get chilled just thinking about your temps! Not exaggerating either. LOL

So much to see there! I should be more creative.

We've had a very mild winter here too Marie. It is unusual for sure, to have no real measurable snow on the ground in January. Your walk sounds quite chilly, with the wind. We had temps of 12 F here this week, ooh, it was cold. But we walked anyway, just bundled up! Always enjoy your pictures of the wildlife sightings, so lovely to see. Enjoy your week ahead :)

How wonderful that you braved the -18 windchill temperature, to enjoy and share the beauty of your frozen bay and its fauna.
Your squirrel would look wonderful framed.