The heavy snowfall last week, propelled by high winds, filled patios and walkways, driveways and roads. The city ploughs and salt trucks, dispersed when the worst of the onslaught had passed, did a good job of cleaning up. The city does a great job clearing the boardwalk and other trails as well. It does take a day or so for all to be cleared however.

The day after the storm, sunny though it was, we stayed home. Fortunately the next day was sunny too, a real bonus. It’s been unusual to string together two sunny days this winter.

After the storm, the temperatures dipped, unusual for this year as well. Temperatures lower than average both day and night have followed. By the time we saw the harbour again, it was frozen from the shoreline and as far as the eye could see into the Northumberland Strait. 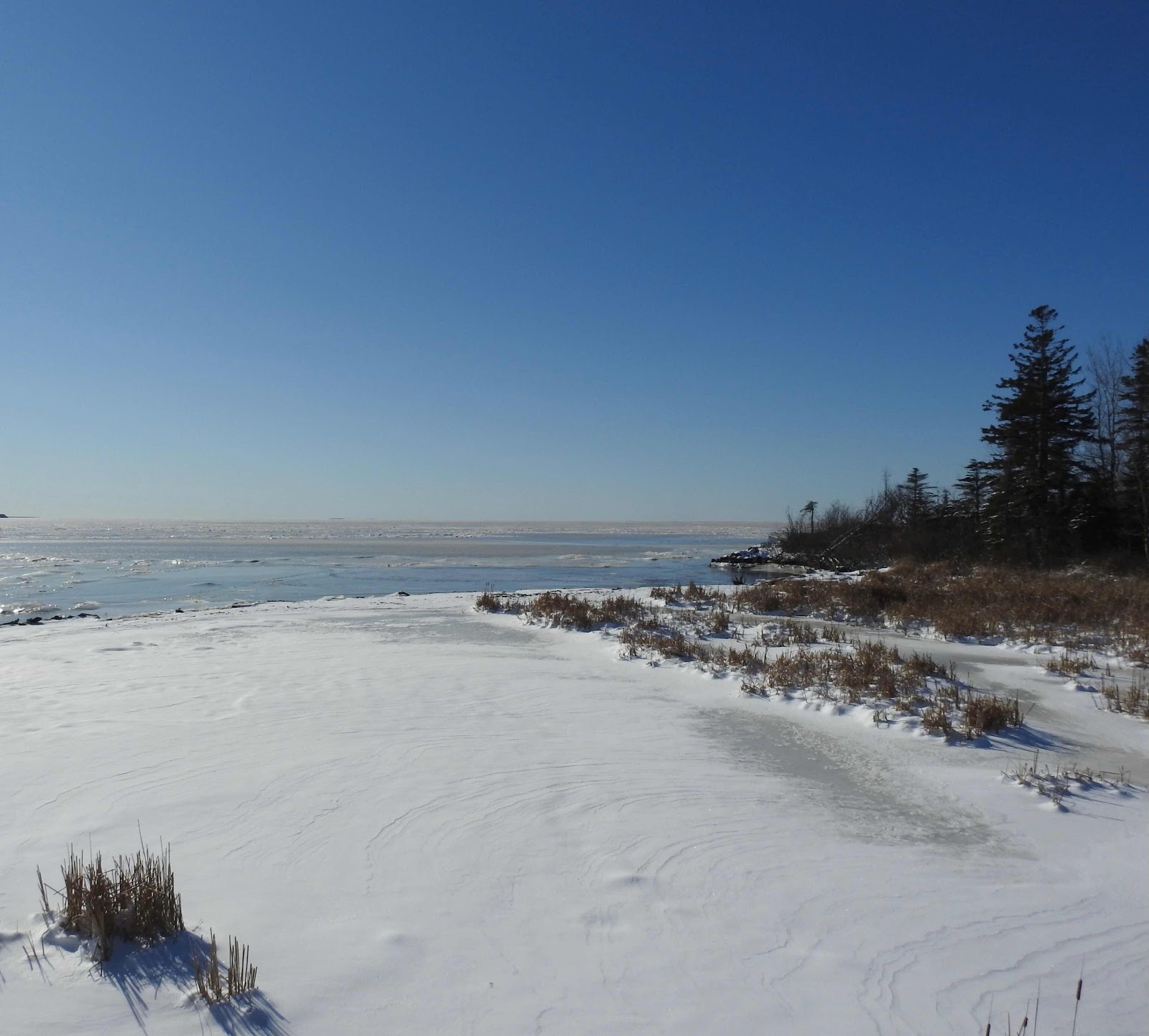 The white horizon is familiar and strangely welcome after this mild winter.

Footprints in the snow were intriguing and we wondered about them. Could a raccoon have created these prints? Are they the remnants of a boot print? 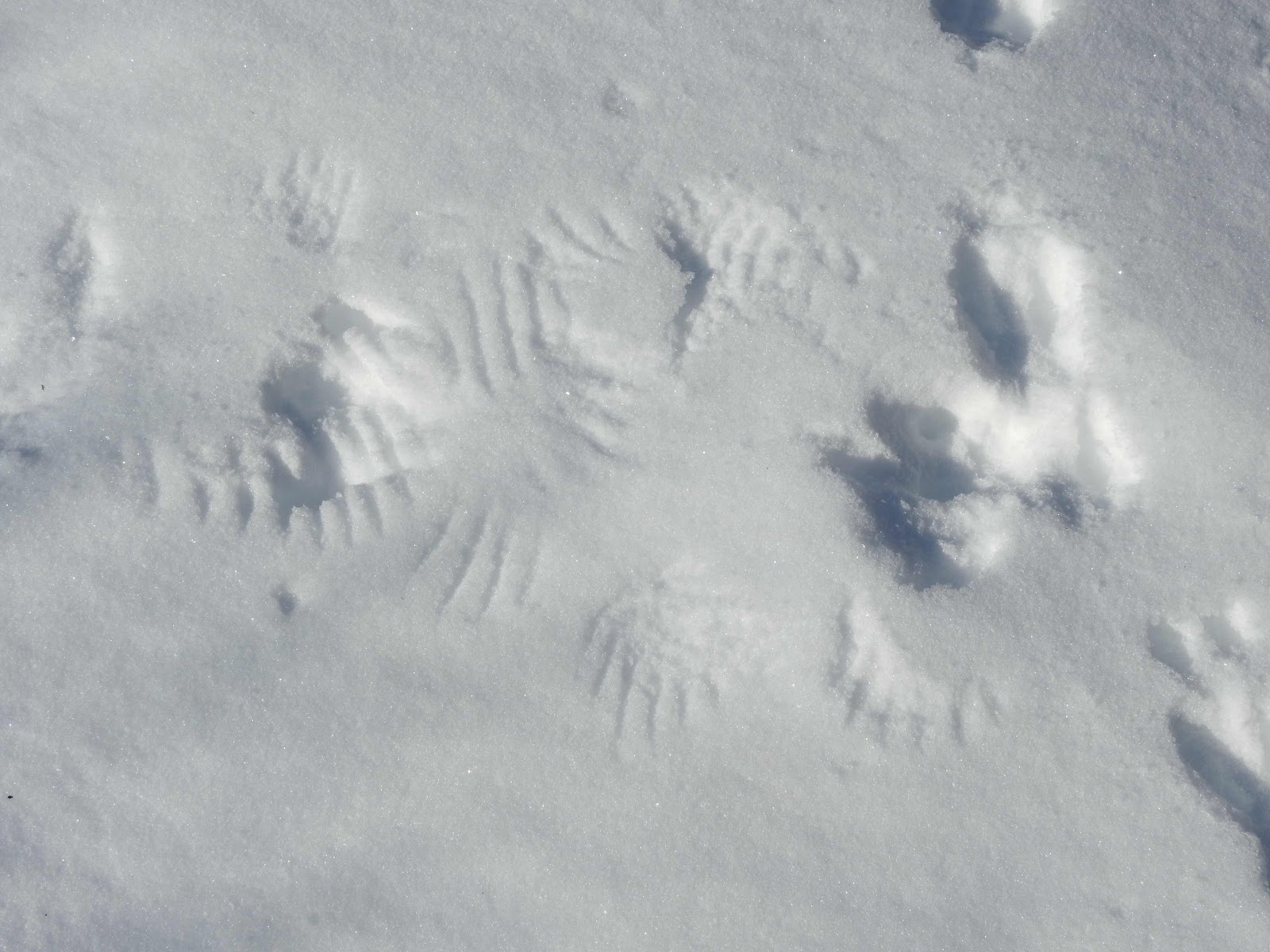 The birds were active, Blue Jays especially. If a walker stops for a few minutes, jays begin to congregate, expecting food. 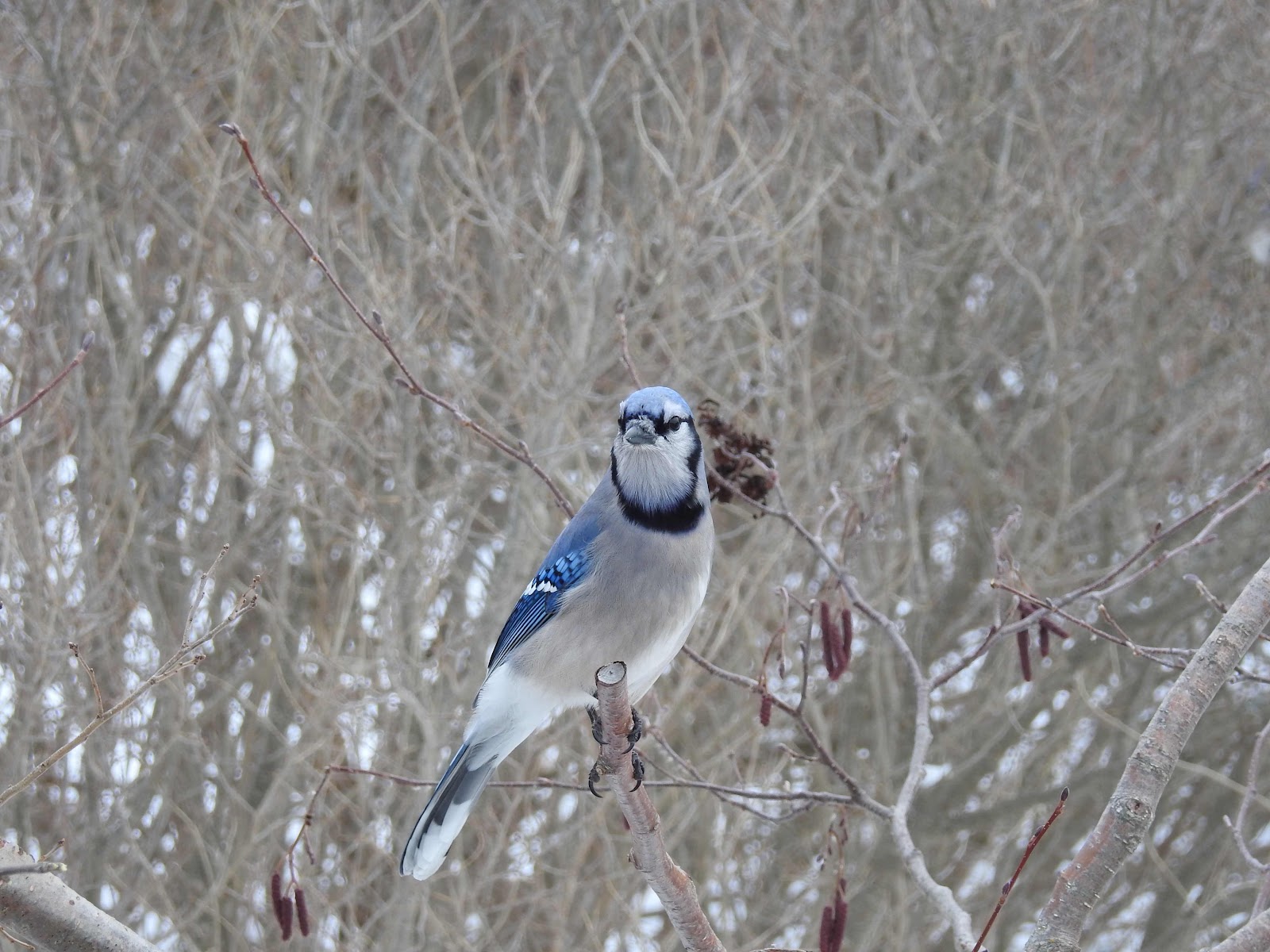 Chickadees waited for seeds too, watching every walker for the possibility of food. 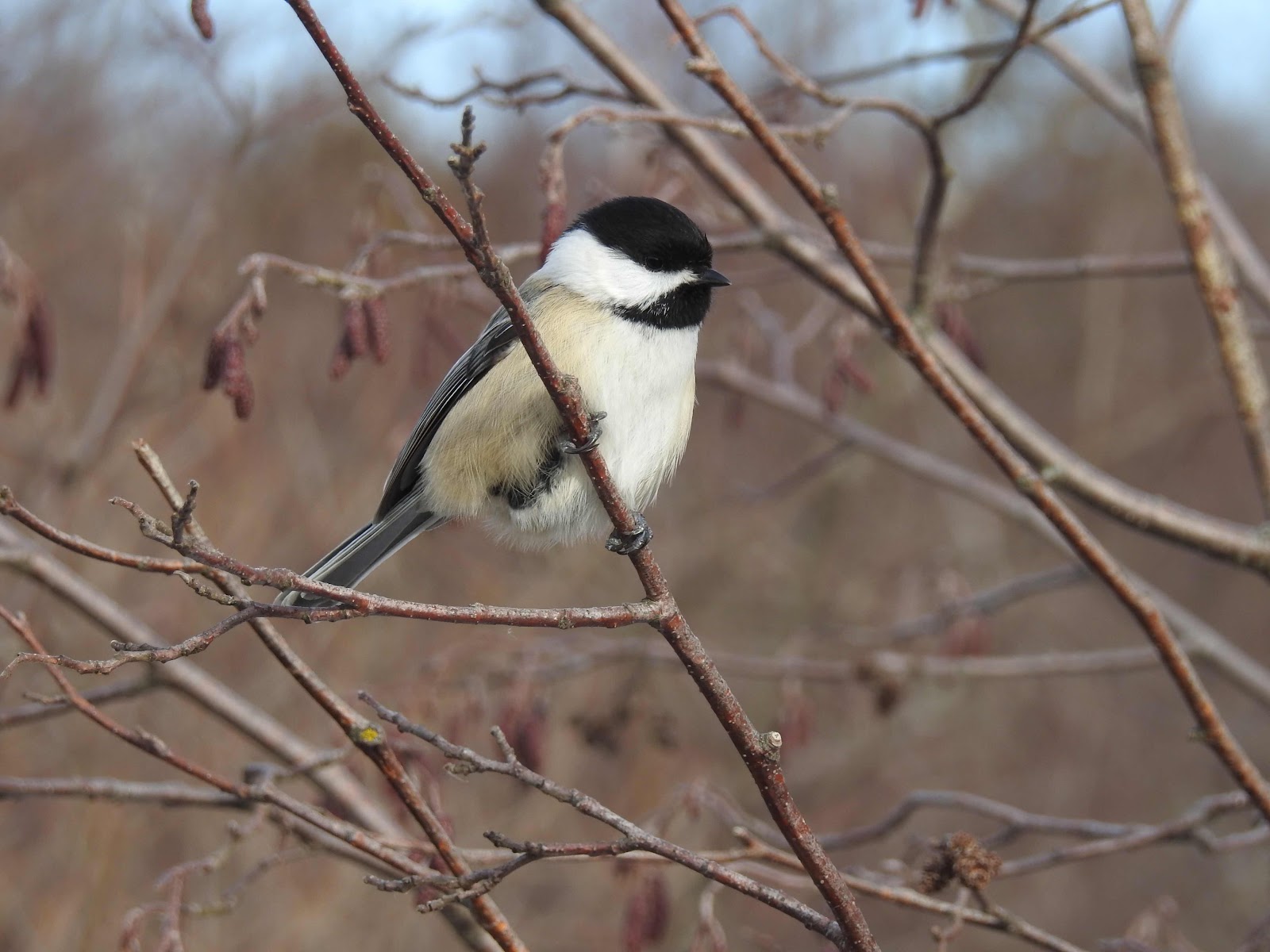 Squirrels were busy as usual. One, settled into a batch of seeds, was particularly noisy and cute. You can almost hear his, “Yummm...mmm,” as he eats the seeds left by the walkers. His nine seconds of cuteness are worth a look. He doesn’t mind an audience. Turn up the volume to hear his enthusiastic munching.

The trail shows the depth of the snowfall and draws us on to the roundabout at the end of the way. 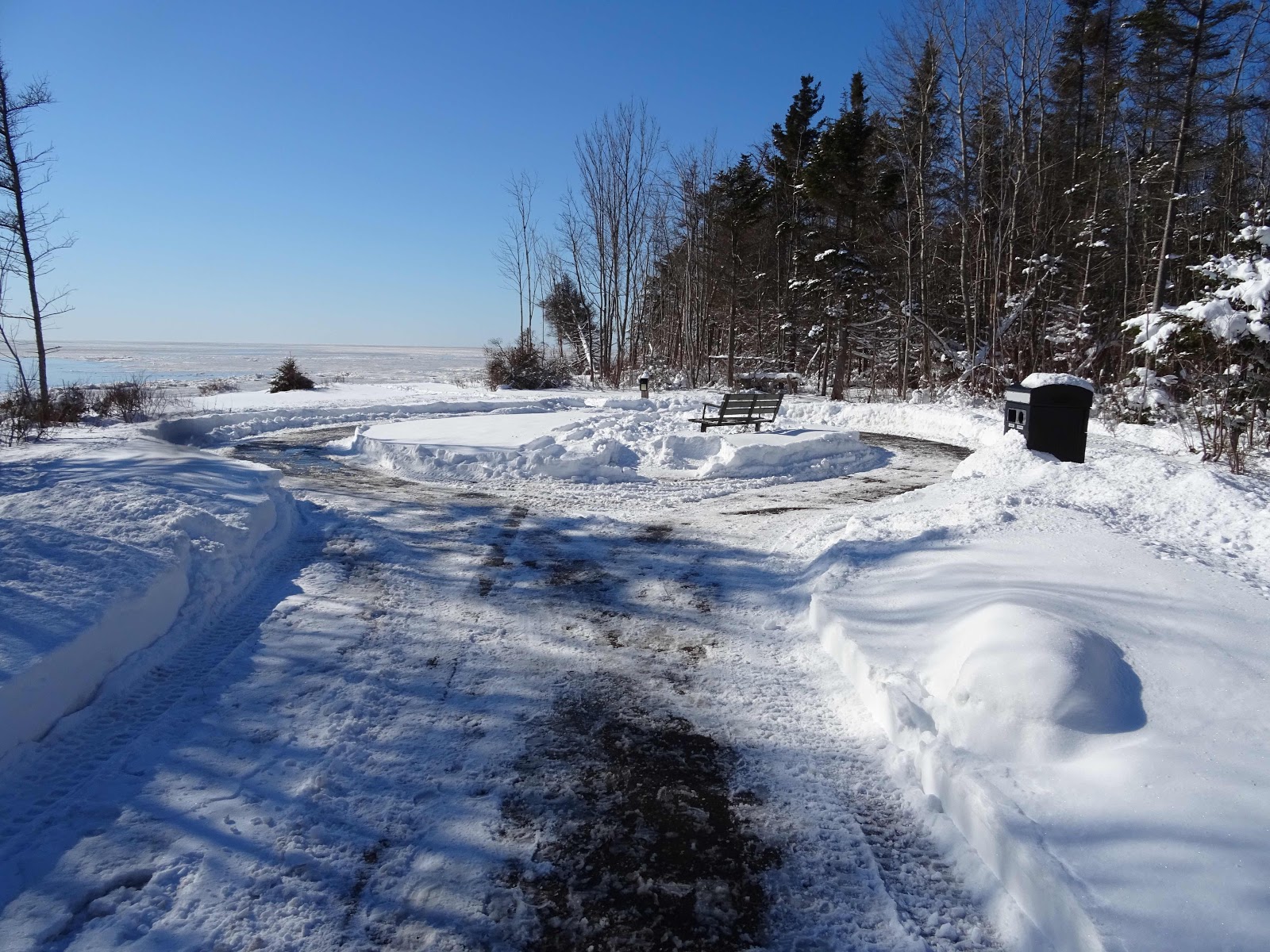 A silent witness takes in the beauty of the scene despite the temperatures. Cold helps solidify peace of mind. 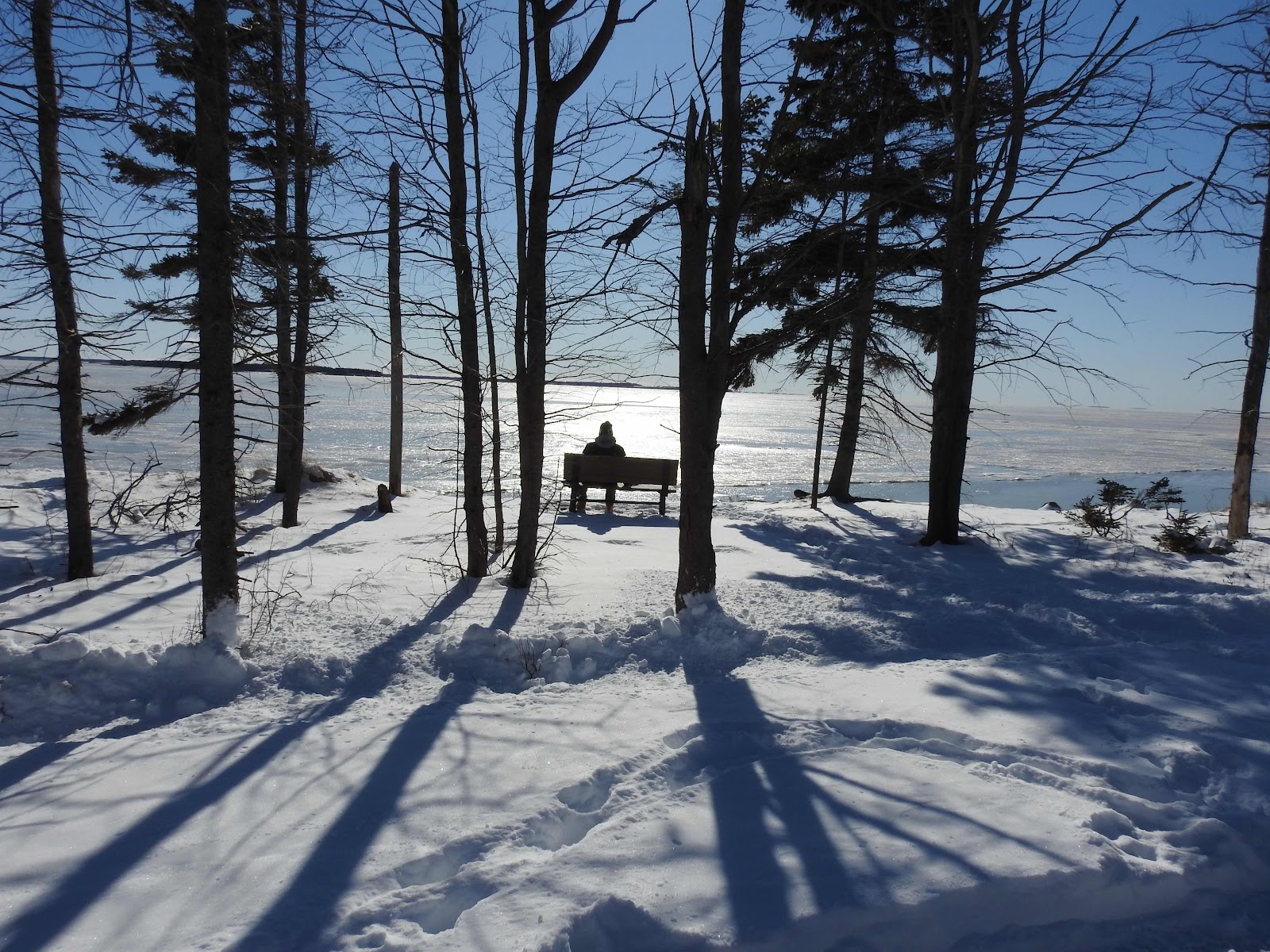 It does look cold, but the sunny skies make all the difference. Love that last solitary watcher. :-)

No matter how cold, it's always better when the sun shines!

Cold like that would certainly solidify something, not sure if peace of mind is at the top of the list! The tracks are intriguing and your feathered friends are always welcome.

How gorgeous! I love seeing all that snow with a blue sunny sky. The little squirrel video is adorable!

Those footprints of whatever looks like it has 6 claws or toes, Interesting but maybe it really is only 5. Keep safe Diane

Alien to me - but so very beautiful. Thank you.
With thanks to all those who feed the critters.

I just love your pictures! So white and beautiful...
Take care and have a great week :)
Titti

Beautiful despite the bitter cold.
I absolutely love the last photo of shadows and the silent witness.
That's a wall hanger.
Sue

Really lovely. I love the squirrel. Here all is grey. The weather folks tell me that it is supposed to rain tonight, but I will believe it when I see it.

Beautiful scenes from your walk. I'd love to be sitting on the bench near the water too, very peaceful place. The squirrel was funny munching on his seeds.

I know I would be chilled to the bone, but I would be in raptures if I coud take this walk.I love your bird images but how gorgeous is that squirrel!
I have been watching the movement of the ice beneath the Confederation bridge via their webcam. I find it quite unbelieveable.

Hi Marie, I continue to be impressed with the photos you take when you are out on your walks. These pictures are excellent and that last one is, in my opinion, an award winner. I enjoyed your description of the storm and the aftereffects. This brings to mind why I enjoy Island Musings so much ... combination of an excellent writer with excellent photography. :-) Thanks, as always, for sharing and for your kind comments on my blog. Wishing you and yours a fine week ahead. John

Your shot of the blue jay is my favourite here.

Your pictures show that there is still a lot of beauty in winter.

There is beauty in snow and winter even if it does get cold.

We're under a snow warning for tonight. Those tracks remind me of the wing marks of Ruffed Grouse here.

Hi Marie, I hopped to you from the Furry Gnome, checked my Canada map and had a geography lesson as well. Looks mighty cold, I scrolled down, and saw the skating, what a great idea to have a frame that skids along, I remember roller skating when I was a child, we lived about 40 minutes from the city where it was, so that involved a 25 minute walk, a 30 minute bus trip, then another 40 minutes by train, Then the tram to the rink, looking back, my Mum was stoic beyond my imagination today to take me and a friend, each school holidays. Keep hoping you can stay cheerful amid the lockdown and the Covid 19 that is so rampant in other areas, here in New Zealand we have been so fortunate to have relatively few deaths, although a new UK variant is now here, with one family infected at the moment, and no knowledge of how they got it.We are at the tail end of summer, but have rain, wind, and further south a cool 7 Celsius, in our summer!!! Greetings from Jean.

The polar vortex is bringing winter to all of us.

A wonderful hodge-podge of photos ... and an additional treat to actually hear the Squirrel munching ... (although I am not a fan of them). and lastly, I loved the picture of the "silent witness" ... it would be a great opening page for a mystery story.

Real winter has enveloped most of the country now, it seems. We were forecast to receive lots of snow overnight, but looking outside it does not appear that has happened. Maybe later? At least we are equipped for it, and have appropriate clothing. Must be tough to live in the southern USA and have to cope with this,

we just got snow storm too....
first time we experienced with temperature -8 (minus 8) Celsius in the south ... very cold.
Chickadees seems disappeared from our yards.

Wonderful winter images Marie, loved your little blue jay with the angry expression. The squirrel munching noises are a delight and that last shot is stunning 💙

Beautiful blue sky! That last photo is gorgeous. It's amazing to me that birds can survive in winter conditions. I would fly to Mexico and never come back.

Lovely, clear, crisp and cold images, Marie. We had over a foot of snow fall over the weekend, but now it's very slowly melting and making a mess of the roads. I enjoy the way it brightens the landscape and love walking in the fresh snow, too.
Your area is more equipped for snow than we are. Most people stayed home here. The bird photos, especially the blue jay are so pretty.

Nice snowy photos. I'm glad that the city was efficient with clearing. Have a beautiful day.

Love the solitary peace in that last photo. So calm :)

It is beautiful to have the sun shining brightly after a snowy day. Beautiful views and photos. I always love seeing the birds, the Jays and Chickadee are pretty. Take care, enjoy your day!

Marie, your winter is prettier than mine. We have snow sometimes and it is beautiful for a day and then melts away. Most days are just cold, dark, dreary. Those photographs are absolutely gorgeous. I really like the blue jay and the squirrels. I love wildlife and we do have an abundance here where I live. The ending shots create different feelings in me. Peace and maybe loneliness. Thanks for taking me along on your walk. I do enjoy your posts.

another great story and beautiful captures of the birds. roundabouts always makes me laugh, we call them circles!!!


how nice of nature to bring you two sunny days after storm :)

this is so nice to get along and witness the breathtaking beauty of your area during winter days !

oh this is lots of snow indeed ,i feel for birds starving for food in such cold
last image is soothing

Thank you, thankyou thankyou for the video...it made me smile from ear to ear...I really, really needed that.

I love the last picture, it's beautiful.