We haven’t been out and about much this last month. We have had a few outings which we’ve enjoyed and the camera is always ready. My husband and I go on days without the wind since it makes the minus temperatures feel so much colder.

Along the north shore, at North Rustico, 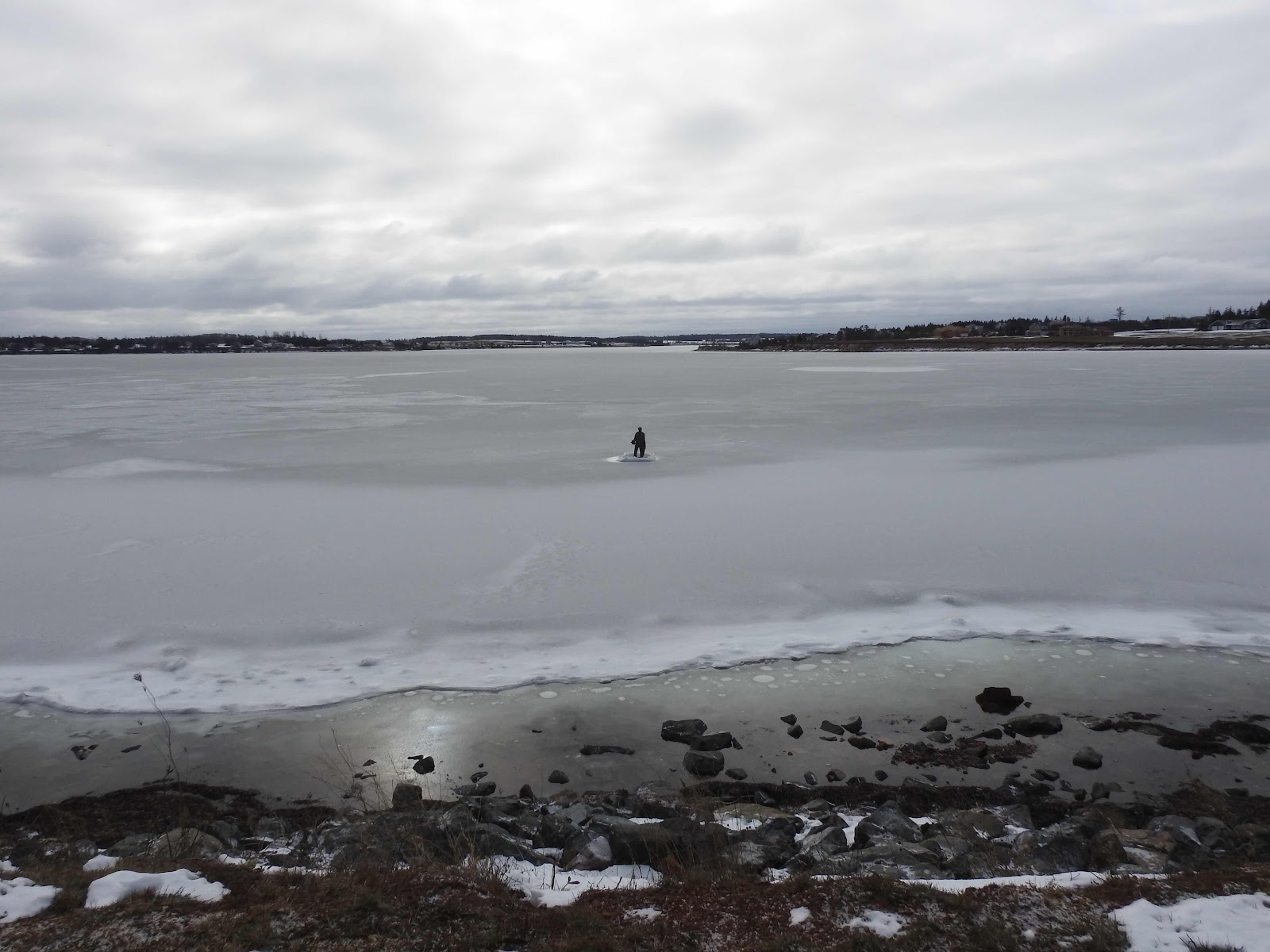 a fisherman statue in the harbour was frozen in. 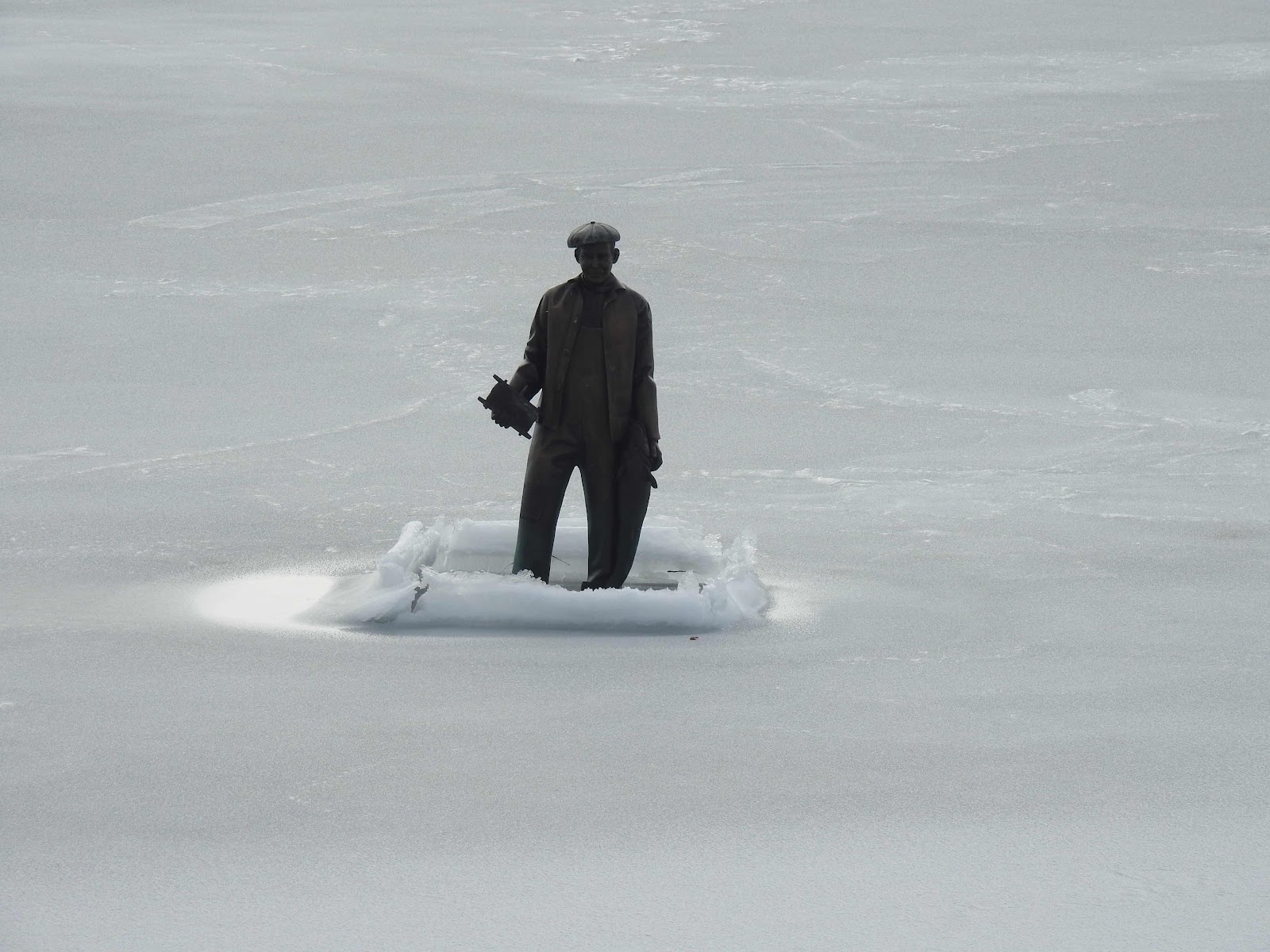 Just outside the harbour, there is open water this year.

The fisherman looked a bit different as part of this scene with a crow and some shrubs. 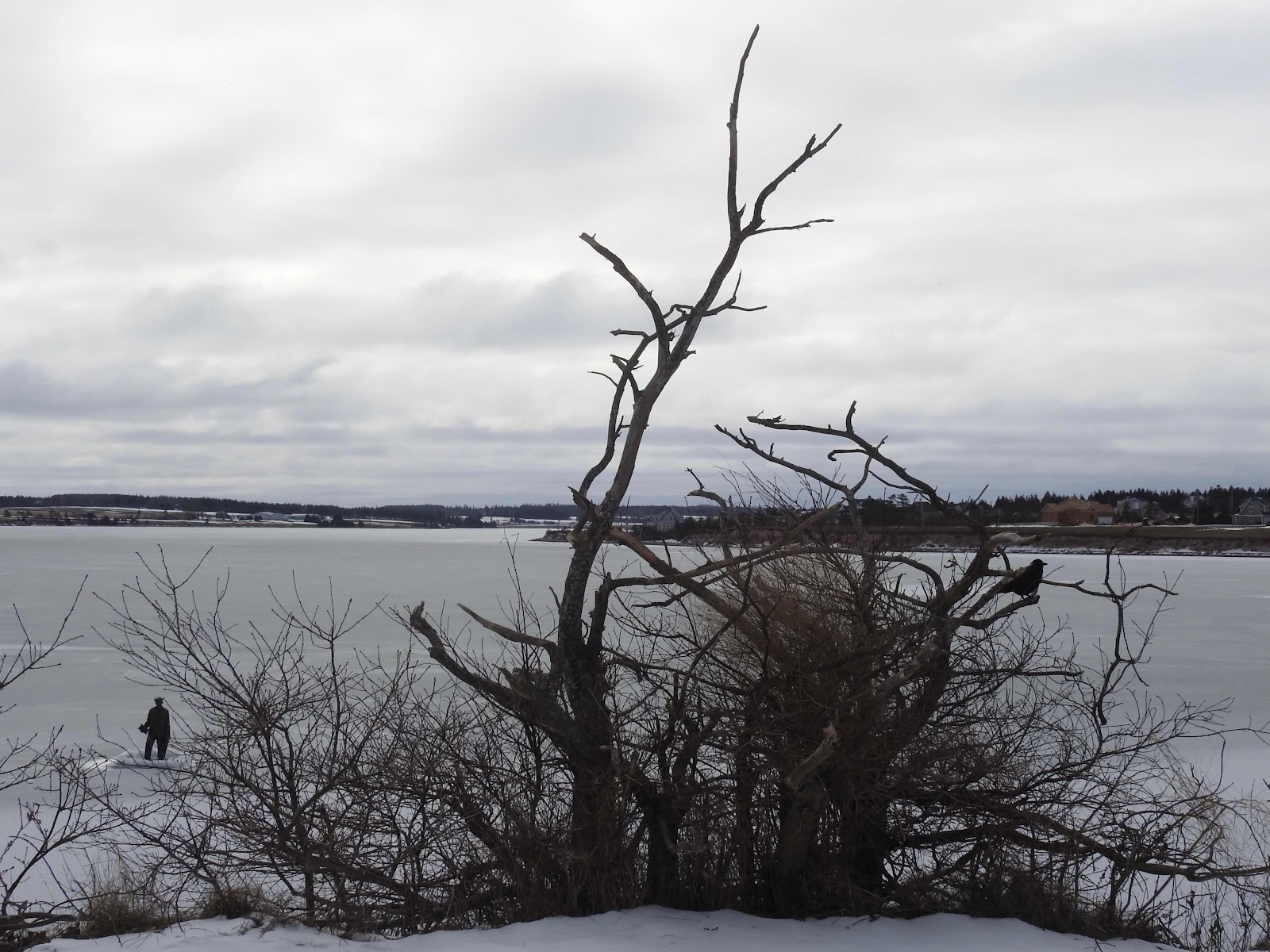 At Orby Head, west of North Rustico, black objects floating on the water were interesting and required a look. When I focussed on the closest one, it was this female Common Eider duck. 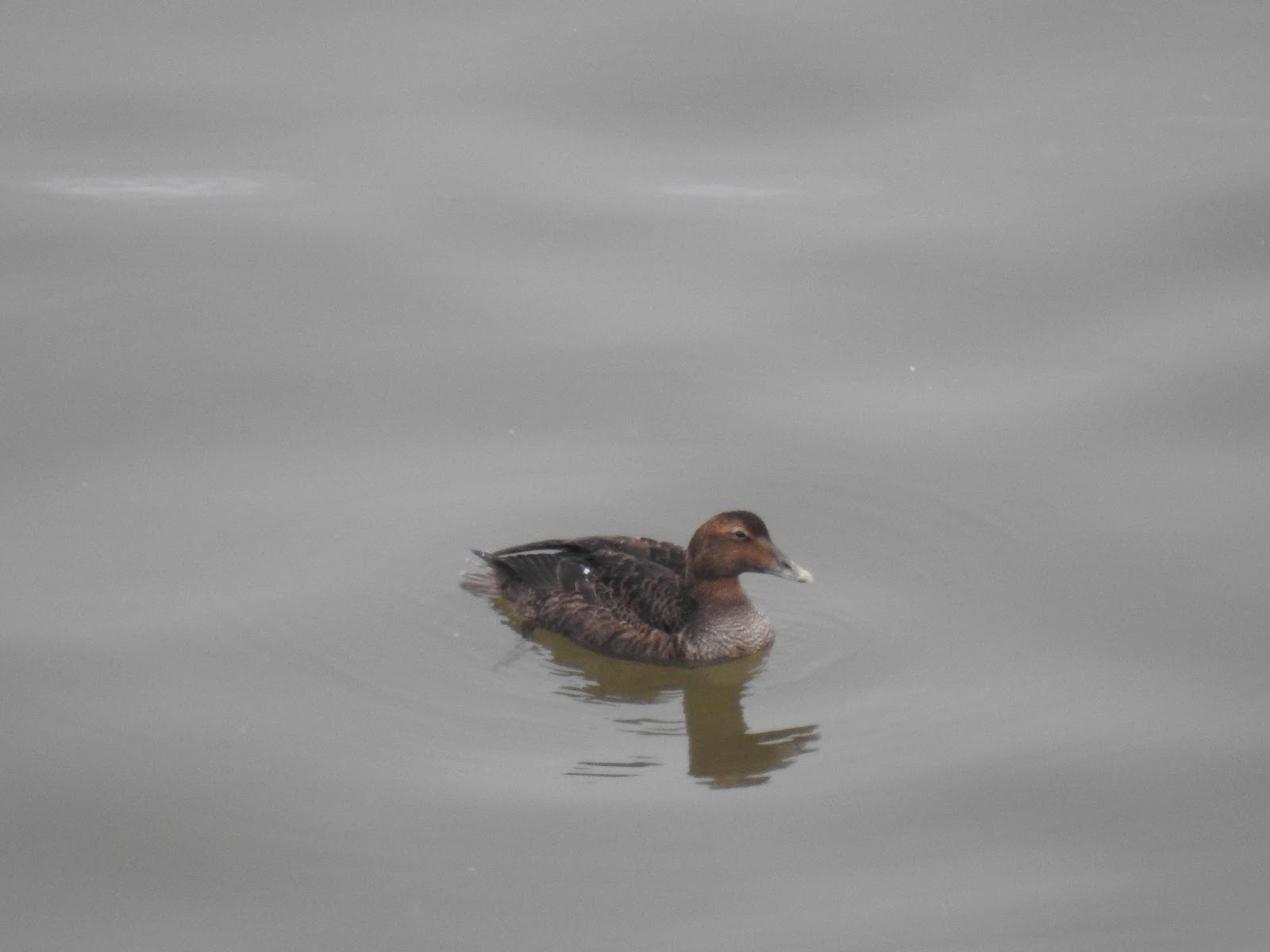 I had never seen one before so this was a thrill, though not a great photo due to the distance involved.

The final photo comes from the Mill River Resort where we went snowshoeing recently with our family. The Prince Edward Island sign was partially buried in the snow at that time. 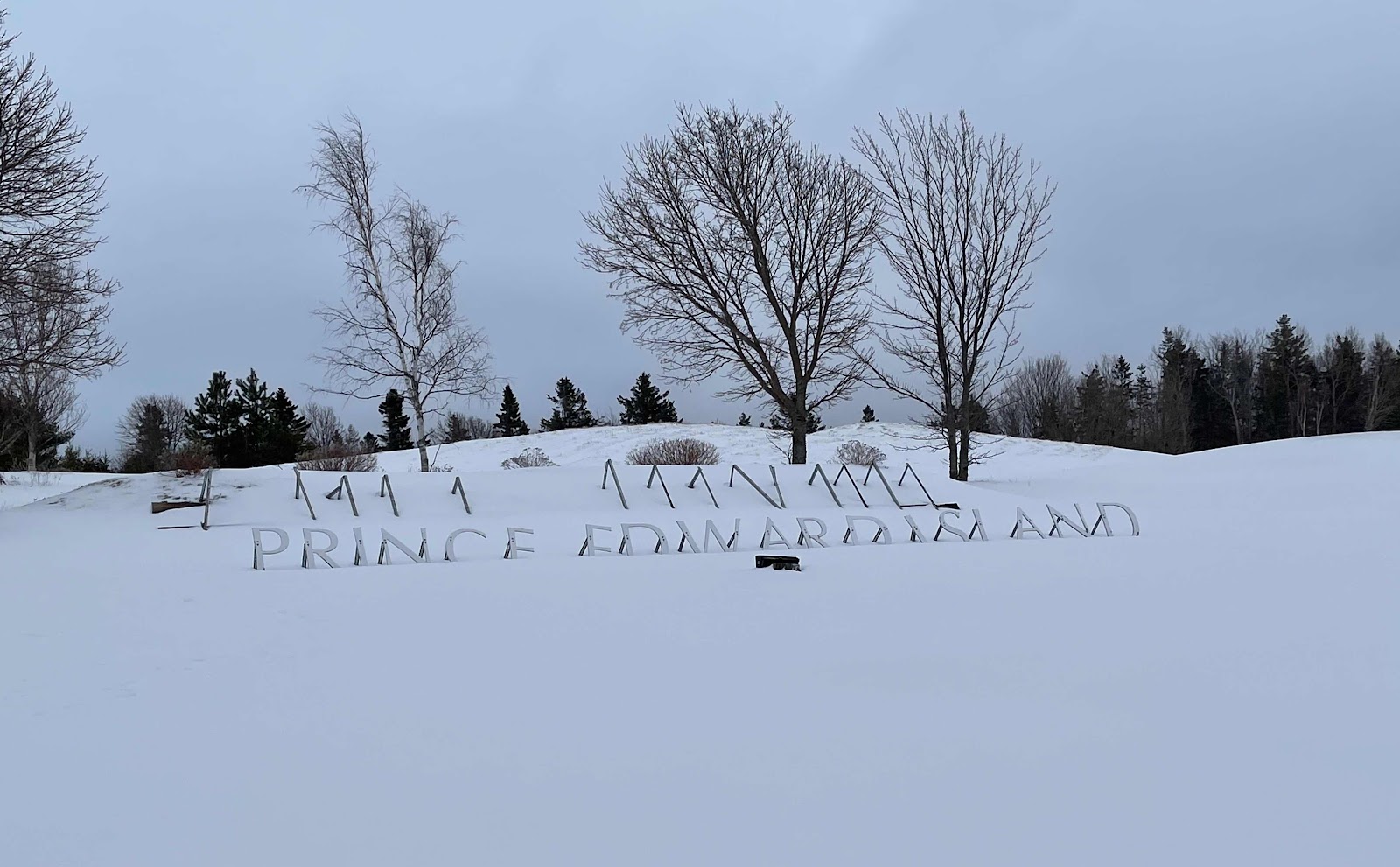 It is interesting to see the difference in natural light on these separate occasions. I didn’t change settings on the camera, I rarely do or do anything in post. We’ve had many grey days as in the first four photos. The blue light was a welcome change.

When I saw that first shot I thought Oh my, what is that man doing out there, he's going to freeze to death lol. Glad to see it's a statue. I suppose you probably can't see the sign at all today!

Wonderful fisherman statue. Recognized his fishing rig, my kid's Dad used to use one like that, he is from Norway, born above the Artic circle, their sea would freeze too. I really love your photos.

I was thinking the same thing as Martha. That crazy guy out there on the ice, I laughed after I read he was a statue. Great pics, Marie.

I'm glad you explained the fisherman was a sculpture. I was just thinking, gosh ice fishermen know no boundaries!

No wind would make all the difference. Huge thanks to taking us along on these beautiful excursions.

Now I know what you mean when you say you are having a grey day! The atmospheric colour is quite different to anything we normally have.
Take care during your current storm, and stay warm :) xx

Glad to hear that fisherman is only a statue, though some real fishermen I know would be crazy enough to stand out there on the ice too.

Terrific shots! I try to avoid windy days as well, but can't always.

We can get some very dull days. Sometimes there's 20000 feet of cloud above you.

I enjoyed seeing your fisherman in both photos. If you hadn't told me about that sign, I would have missed it! :-)

I looked and I looked and started wondering what is he doing there by himself?!!! It is a statue!!

You had quite a snow fall!!

I confess that I got lost, for I thought I was reading another blogger as she and I live both near Hwy 7 in Ontario. But I couldn't place Rustico or a fisherman statue. I am pretty dumb. lol

I am growing weary of the gray days, are you? I like the shot including the crow...I have been thinking I need to work on getting a good photo of a crow. I do not have one single good photo of one.

And that last photo is interesting...

At first I thought the statue was a man ice-fishing. It is good to get outdoors, we have had some cloud gray days too. Lovely views! Take care, enjoy your day and week ahead!

Wonderful looking weather - I miss having a real winter!

Eider are wonderful ducks - did you get to see the male?

in the first photo it is hard to differentiate the sky from ground ,both look grey
nicely captured images .i wonder how bird float in freezing water

Congratulations on seeing Common Eider. I would have thought it fairly common around the shore of PEI, but perhaps not if this is a first fir you. When this pandemic is over, I vow to get down there!

The fisherman and his surrounds look very different to when we visited one summer, too long ago.
I hope your Grandchildren are having as much fun, in all this deep fresh snow, as our Ben.

Great pictures and I see that you too are having lots of snow. I particularly liked the fisherman in the harbor. What an apt place for him!💖

There is stark beauty in the grayscale landscape, but it gets oppressive to live in it. I'm there with you, although with warmer temperatures.

I'm so glad you explained the statue..I was sure it was a crazy fisherman..(:0)
Beautiful photos but oh my it sure looks cold.
And here I am complaining about 40F. temps..I am such a wimp..
Sue

You made a great capture of the duck and I thought the statue was an actual ice fisherman.

I'm glad he is a fisherman statue and not a real on, or he would be feeling really chilly. BTW I used to have a fishing line just like the one he is holding, I wonder where it went? I don't seem to have it any more.

The light really is beautiful Marie. The Fisherman in the sea sculpture is amazing, so dramatic standing there in the ice, super composition with the tree and crow 💙

The light is beautiful, and you are right - it makes such a difference. We have a LOT of grey days here, but recently it's been bright and much colder than normal. I can't complain too much about the cold because the rest of Canada laughs at us, but it was -5 on our thermometer this morning!

Love the statue. Does he get covered in water?

WE were out yesterday and the wind was ferocious; today the air temperature was probably about the same but no wind so it was much nicer. Although our coldest temps are probably warm to you!

Have a wonderful day.

My goodness - it sure looks cold in your neck of the woods! And I've got the AC on here! My favorite is the last photo of the Prince Edward Island sign peeking out of the snow.

i thought the statue was a paddle boarder...a brave paddle boarder!! we have not been out much either. a few car rides to the lake and the inlet.

that is a cool looking duck, i get so excited when i see a new species!! i love the sign and the last picture of it. i would like to see a picture in the spring!!

ps...i read this the other day and must have gotten called away from my computer. i thought i left you a comment!! i don't change the settings on my camera either and i rarely edit my pictures. sometimes i add a little color or crop them but that's about it and often i can't be bothered!!