Prince Edward Island is made of red sandstone which erodes easily. The changing climate has greatly affected the island over the last number of years and will continue to do so. In some areas, meters of shoreline are lost every year as storms pound the coastline, washing away the sand dunes and eroding the soft stone. One of the benefits of the freezing around our shores every winter is the decrease in erosion from the sea’s confinement by the ice. However that is changing. 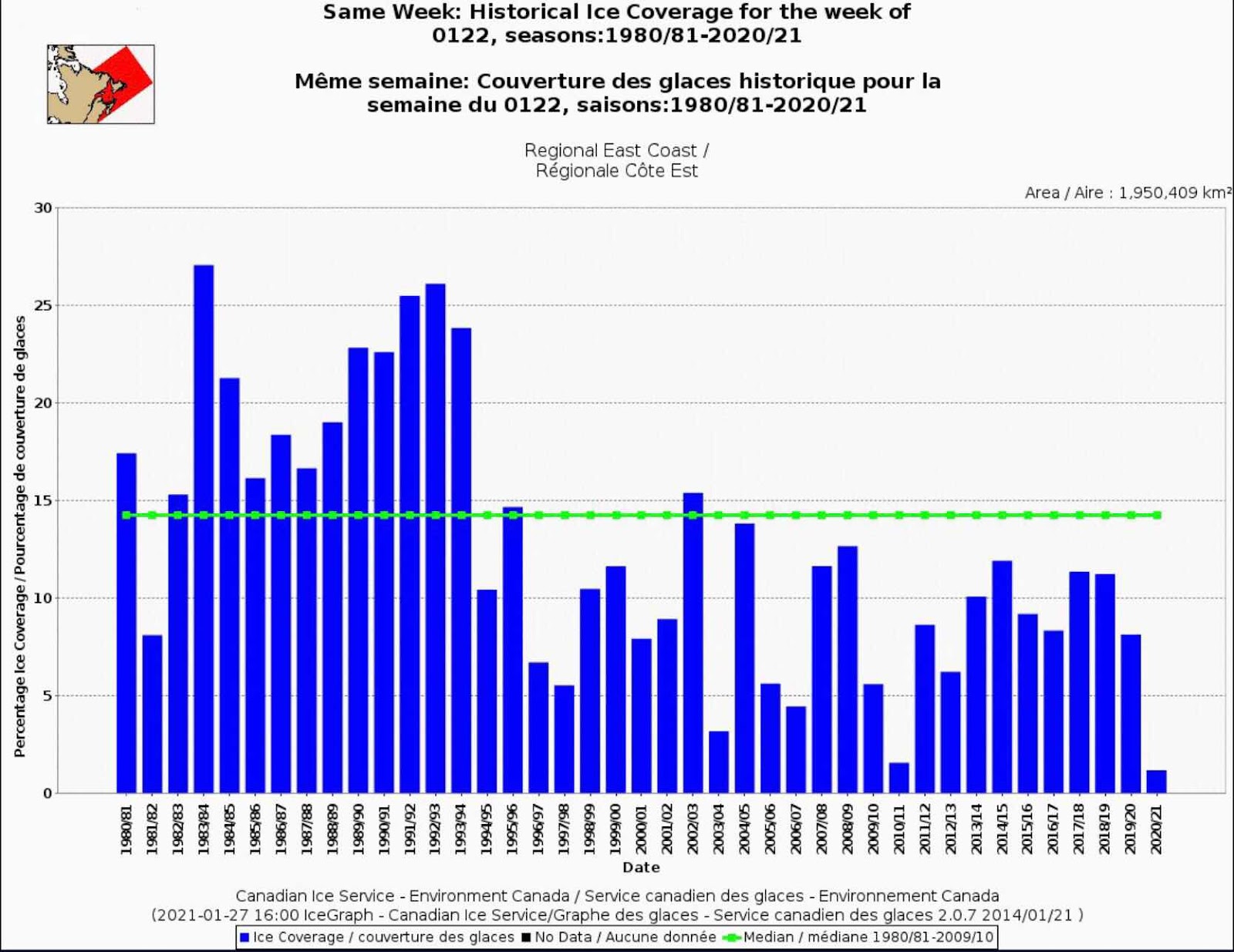 The chart from Environment Canada shows the amount of freezing around Prince Edward Island this year. A little in the bays and harbours accounts for what there is. The Northumberland Strait and the Gulf of St. Lawrence are ice free around us. 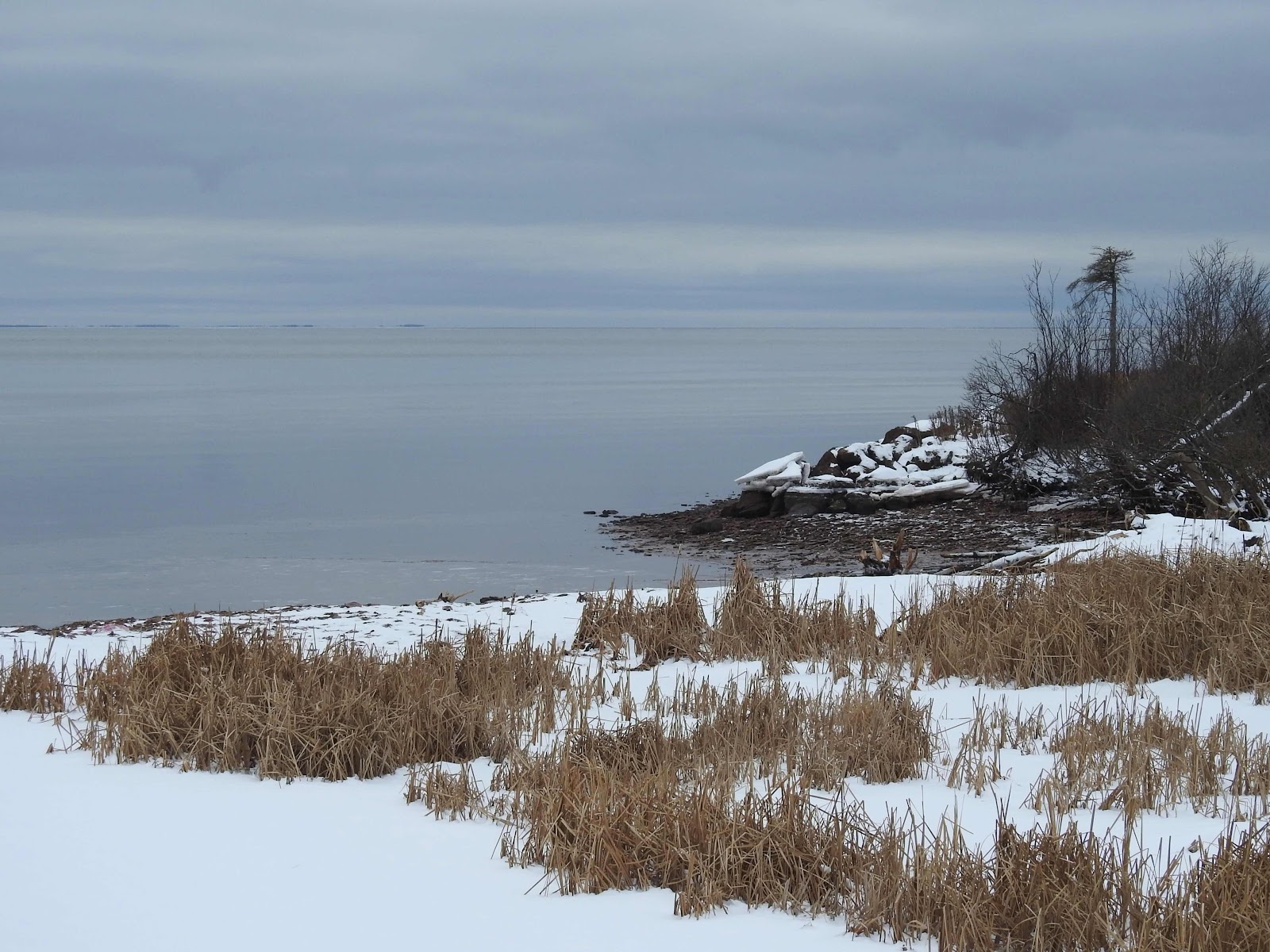 The photo shows a view to the Northumberland Strait this week from the Summerside Harbour. Normally the sea is white this time of year.

We saw the open water when we visited the north coast of the island recently. 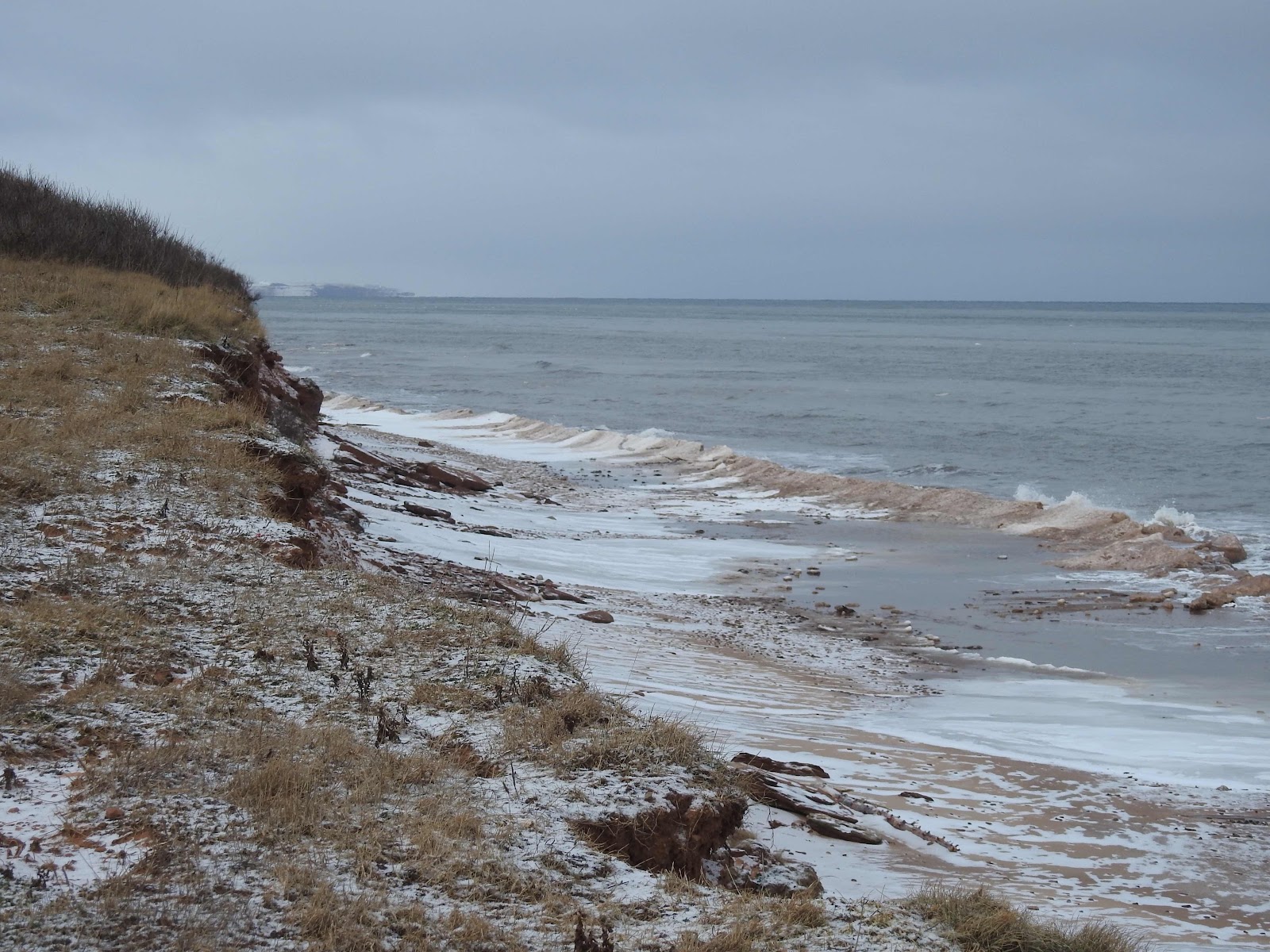 The only ice is in a band along the shoreline which breaks the waves before they reach shore. This is some help but not enough to prevent real damage to the coastline during high seas or a storm. 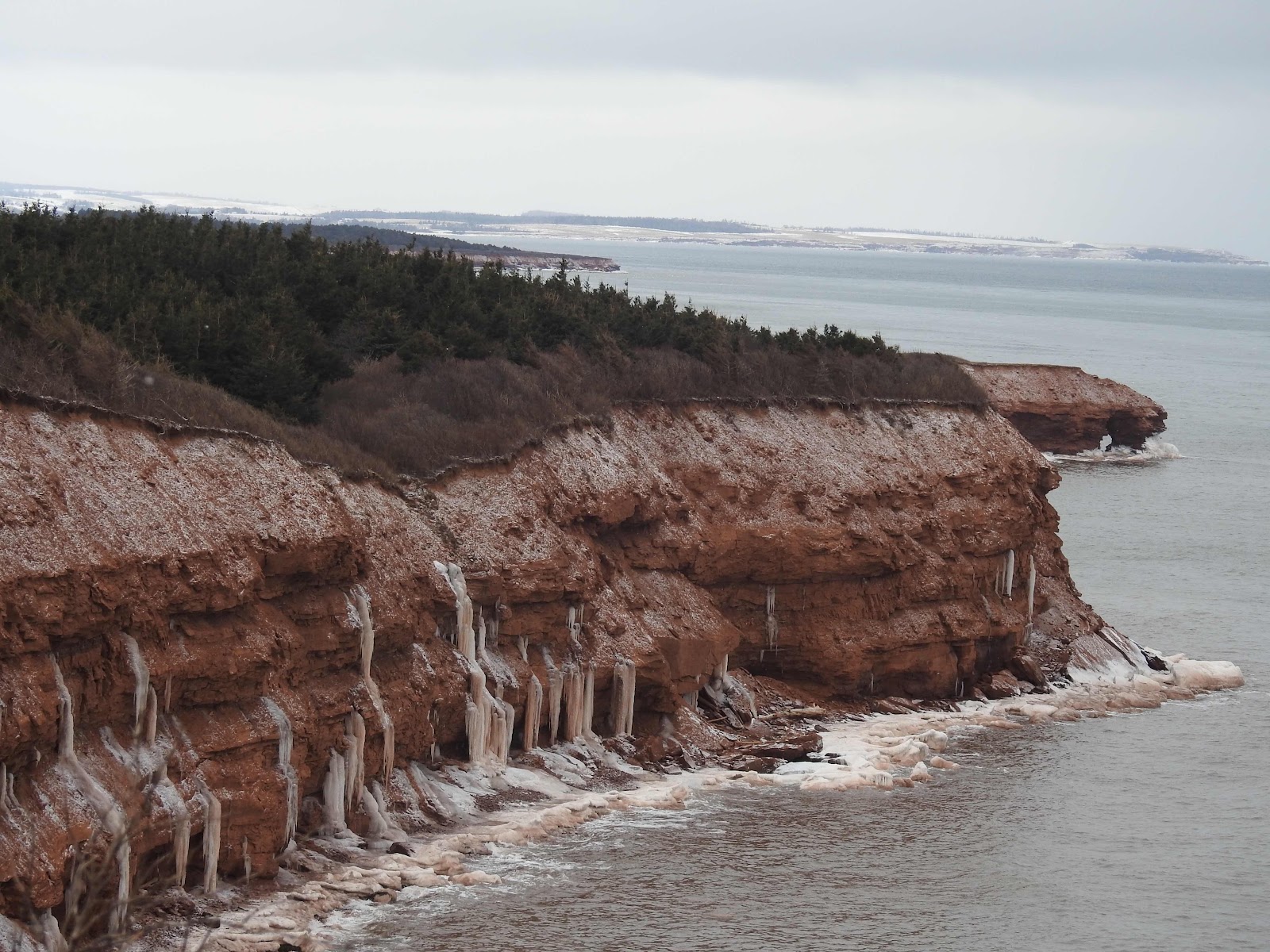 The erosion at sea level undermines the soil above the sandstone, causing banks to collapse. Our little island is going back into the ocean at increasing speeds.

The habitat for bank swallows is in peril as the nests collapse over the winter. 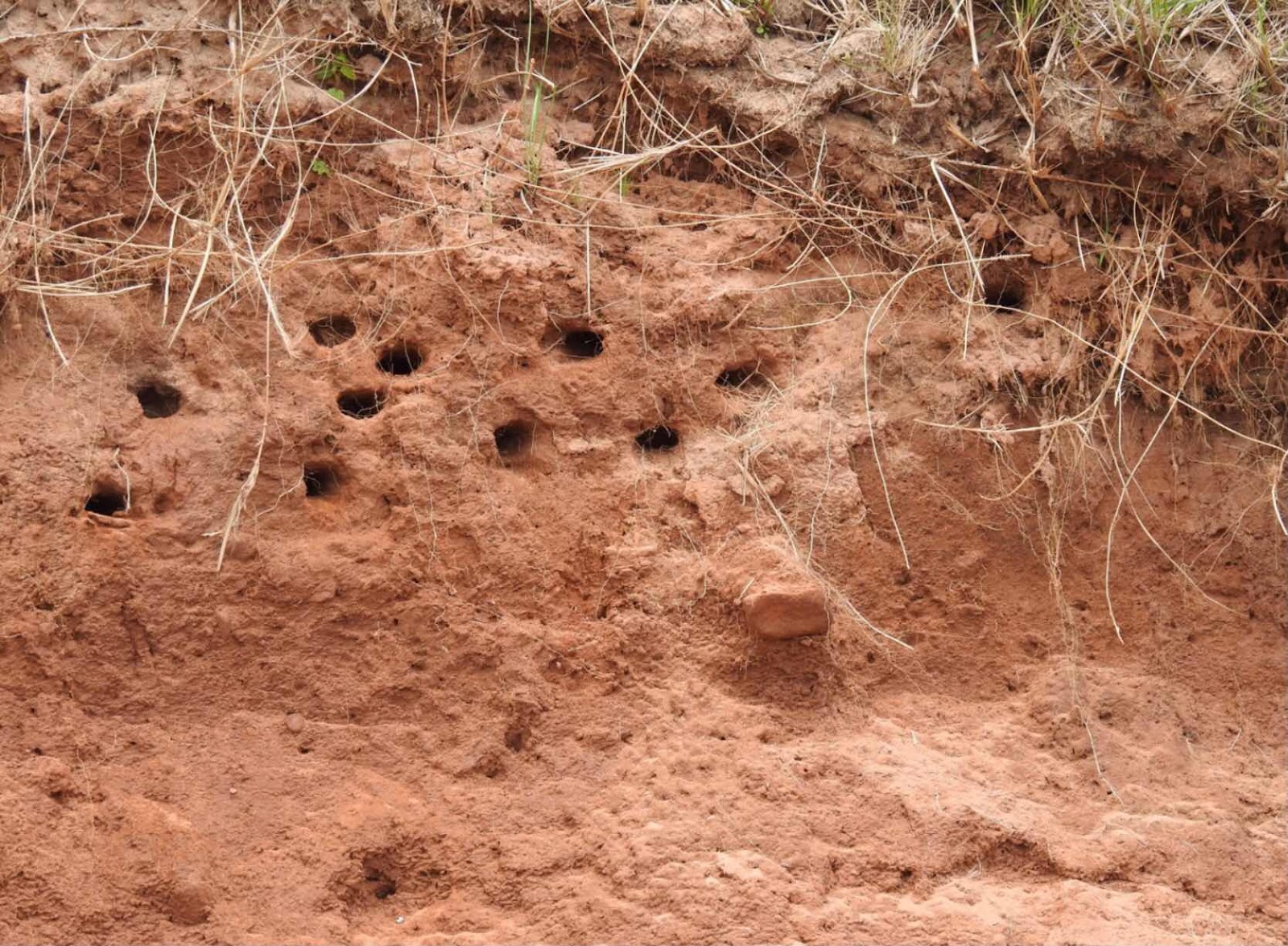 The birds, returning to the island in the spring from their winter migration, must rebuild their colonies again. Tired, many birds do not survive.

The Island Nature Trust of PEI is studying the Bank Swallow colonies to determine what action can be taken to help the birds. Last summer they surveyed the island and found forty colonies of such swallows which need help. This winter will be a hard one on their habitat for sure. 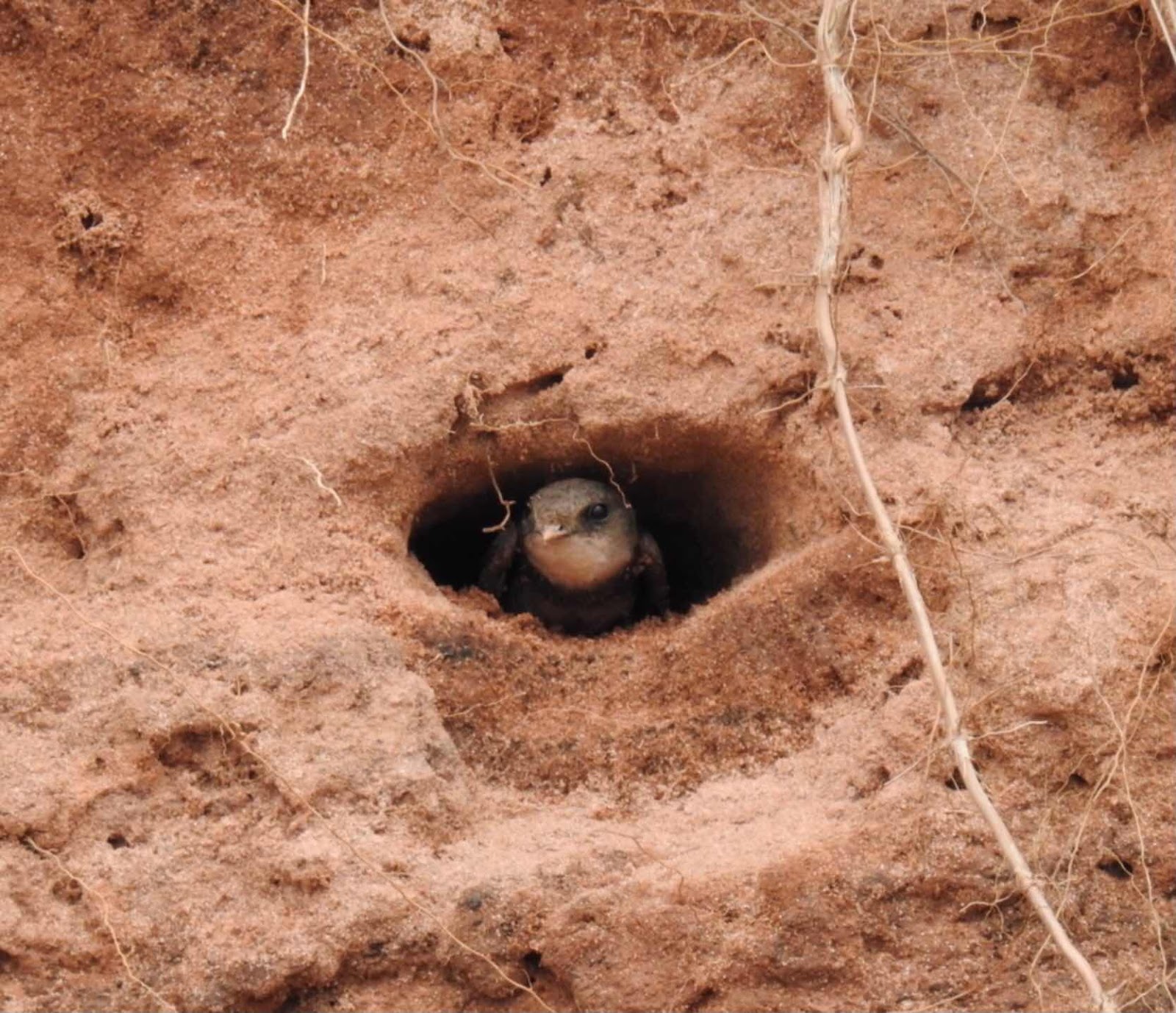 In 2017, I took these photos of a colony of Bank Swallows at Red Point Provincial Park on the east coast of Prince Edward Island. My husband and I were enjoying lunch in the park and the familiar sounds of the frenetic little birds were all around us. 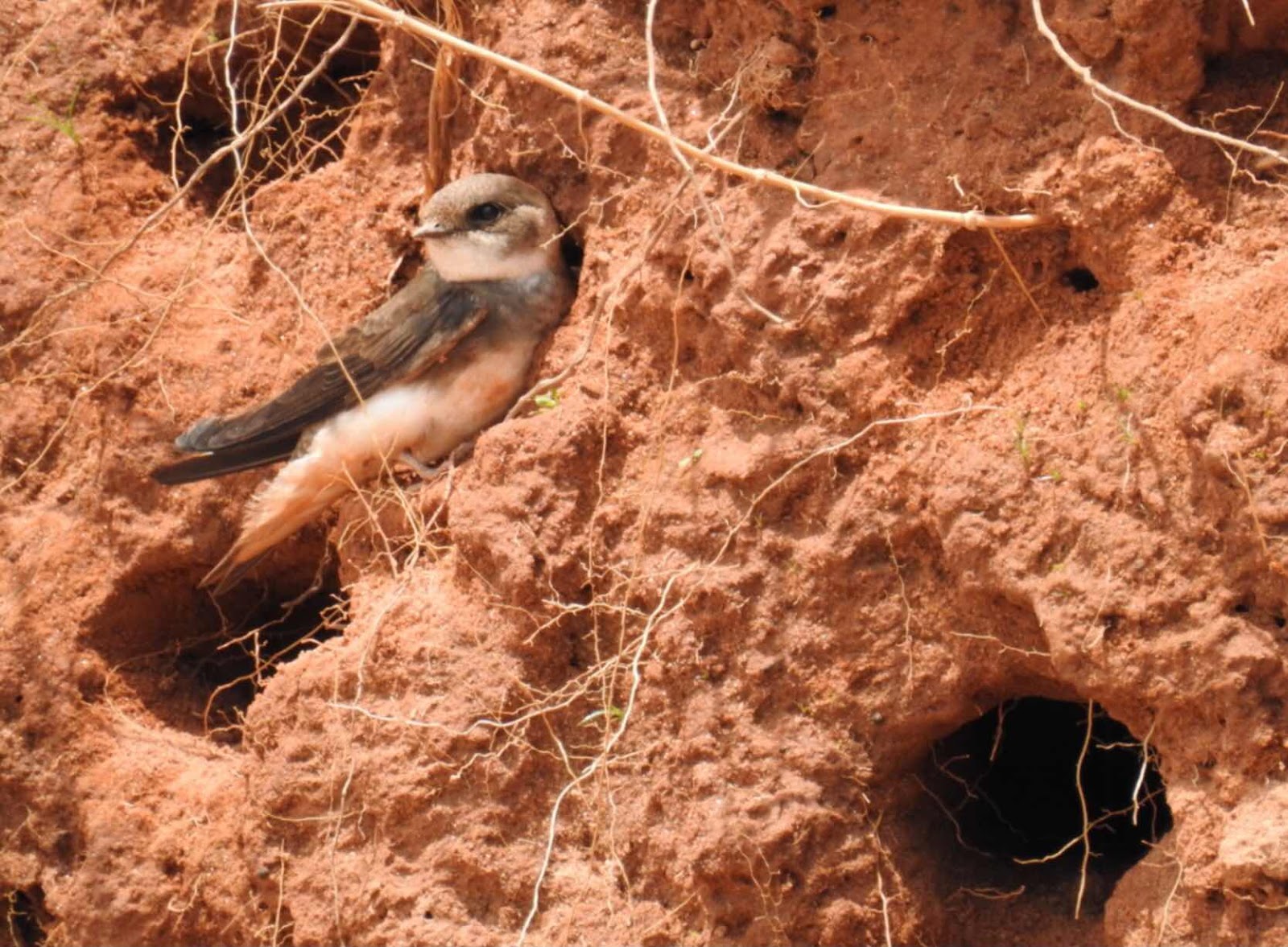 At the beach we saw the holes in the banks. We were lucky it was low tide, so we could be far from the birds as they hunted insects and visited their young in the bank-side nests. The results were some of my favourite photos I have ever taken. 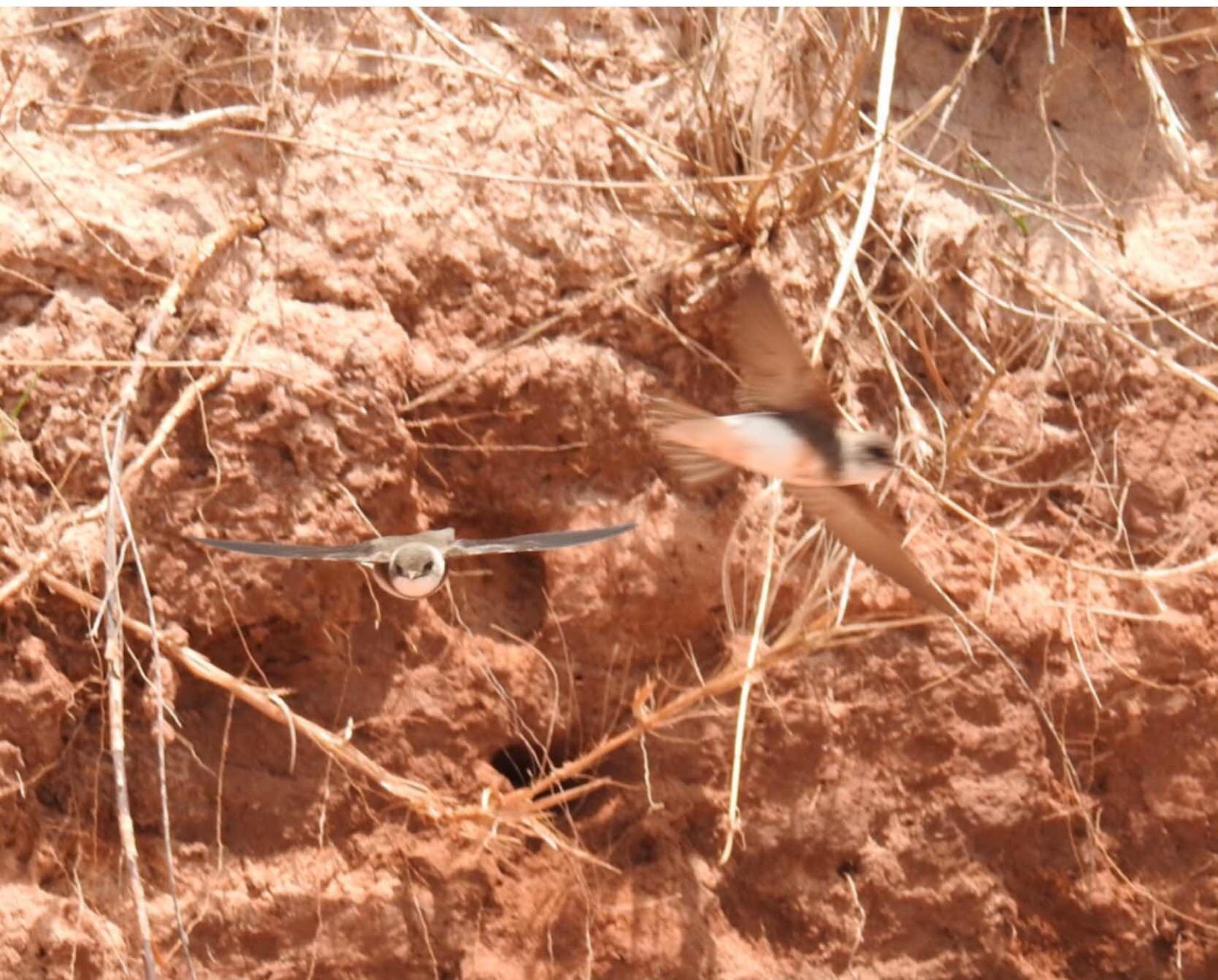 I hope it is not too late to save these wonderful little birds.

I hope not, too. Birds give us so much joy in watching them, as well as their songs. Your photos are wonderful, Marie. Thank you for introducing me to these sweet birds.

Having visited PEI, albeit briefly, I find this to be saddening.

Oh I hope so too Marie. It really is tragic to think of them flying all the way back to find they have to build anew, they travel such amazingly long distances. What we are doing to our planet is abysmal. I can see why you love these captures so much, they are precious 💙

Lovely photos. I do hope these birds can survive.

Great shots of the Bank Swallows. The tragedy of habitat loss is being repeated in many locations, but some mitigation is taking place by the the construction of artificial structures, especially in the UK. As you say, erosion will continue to reduce the terrestrial area of PEI.

The eroding bank is a scary photo to see just how devasting the loss of land is. Prayers there is a solution.

What great shots of those little beauties. I sure hope something can be done to help them. Global warming is a horrible thing. I hope all governments can come together and somehow save the earth before it's too late.

They are WONDERFUL shots. I so hope that they can be helped - and had never thought of ice as a protection against erosion.
We have significant erosion here too but sadly it is often exacerbated by greedy farming practices.

It is sad to hear about the erosion and possible loss of the Bank Swallow habitat. The swallows are so cute, great captures! I am glad we now have a president that plans on helping the environment and climate change. Take care, enjoy your day!

Beautiful photos, hopefully the bird's situation can be helped.

The speed at which PEI is eroding is shocking. We have a friend who is a scientist on PEI and told us about the erosion when we visited. I hope something can be done for the swallows.

Such beautiful swallows!!I long to see them again here in icefrosted norway.

And swallows are just the sweetest creatures...

PEI is not the only place where nesting habitat is disappearing. The colonies I'm familiar with are vacant.

That's a challenging problem! I think we're seeing the sae thing here, the erosion that is, not the swallows.,

I hope so too.

amazing captures of the banks swallows, all of this new to me!! it is wonderful to see work being done to aid in there return and safety!!

our beaches here in new jersey have suffered tremendous erosion, all access points have been blocked as there are 20 foot + drops in most places. the recent work of refurbishing the beaches did not even last 2 years and the cost was well into the millions. i'm not sure what the answers are for us here!!

I am so sorry. My little town will be underwater soon .

climate changed everywhere in recent years....sadly, due to "human greedy."

Hope, the trust could save cute little swallows in the island....

Have a great day.

That graph really tells the story. Very concerning and scary to see the lack of ice formation, and increase in erosion. Beautiful capture of the swallows!

Oh, Marie, your pictures are lovely but your story is heartbreaking. Such a pretty color! I sure hope something can be done. To those of us living on islands, coastal erosion is a real threat. Here on the rocky coast where I live we are more protected and so it is slower than where the beaches, particularly in southern Maine, have no protection from the pounding and unrelenting fury of the sea. ❤️

Oh, I hate that. Climate change causes such havoc and sorrow to humans and to wild life too. I am impressed that your Nature Trust is trying to fight against it and I love the pictures that you took of the swallows in happier times.

Habitat loss is a huge problem worldwide for many reasons and some shores are softer than others. Hope the birds do not disappear. Stay safe, Diane

We're mainly granite and clay here. But our winters seems to be starting later on. This morning I woke to a light covering of snow.
Coffee is on and stay safe

Erosion is becoming such a big problem for so many places. I hope the gorgeous little swallows manage to survive.

Hi Marie, Thanks for posting all your photos and giving us the story on the effects of erosion and lack of ice. I wish people in government who deny climate change could see the facts in your post. This is a great post. Thank you Marie!

Oh dear, I was relieved for my son that he hasn't had to shovel snow as much this winter, but now I see this as a negative. Sadly though, your island is more likely to be lost to the rising ocean levels, than erosion.
Wonderful images of the swallows and their colonies.

It is sad to get to know the beautiful red sand has been damaged.
I hope those birds can survive.
We do not have to shut our eyes to destructions of nature climate change causes.

How sad, for these sweet little birds...

Hope those beautiful birds and others receive all the help needed for their survival.

oh thank you for sharing these incredible images with us dear Marie !

erosion is huge problem indeed ,each thing in nature keep two faces indeed ,this is sad to learn about little lovely birds ,i wish and hope they can find better safe place to live ,they are beauty of the world and should last forever
blessings to you and yours my friend!