Winter keeps us in more than we like, especially when the wind is high and the temperature low. As I write, the -13 C feels like -25 C with a strong wind making an otherwise sunny day too cold to venture forth. However, we have been out on a few excursions recently and as always, a few interesting items have presented themselves.

On our way snowshoeing one day, I took this photo of the boat in front of us on the road. This is unusual sight when the harbours and bays are frozen and the fishing season is months away. It is a common sight in April around the island as boats are returned to the sea. 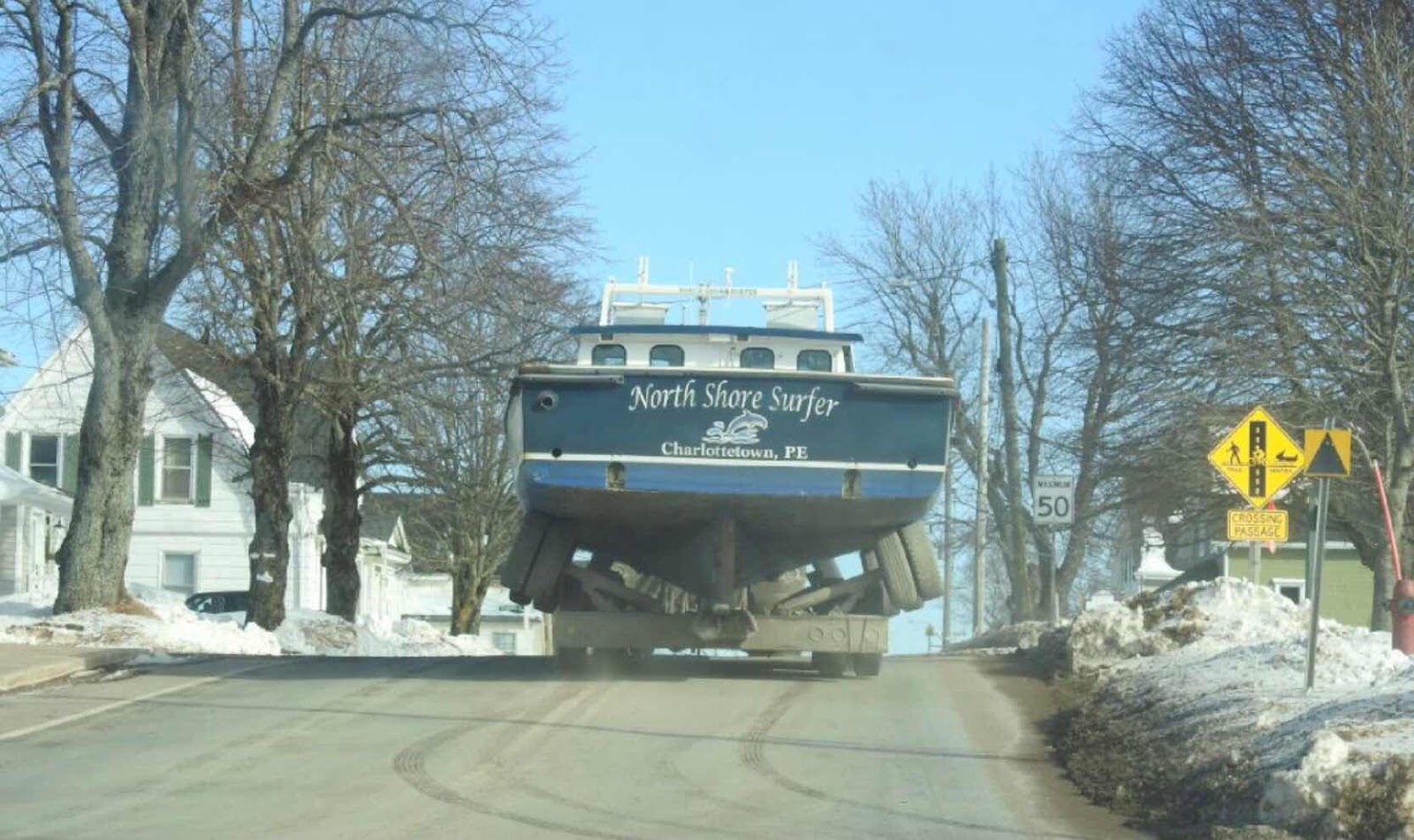 We often see foxes on the roads of the island, especially on the backroads. Such was the case recently but this poor fox is sick. There is an outbreak of mange among the foxes on the island. Mites burrow into the skin of the animal and lay eggs which hatch and cause itching and hair loss. The animal dies of exposure in the winter. This poor creature looks scrawny and infected in the hindquarters and tail. This is the first such infected fox we’ve seen. 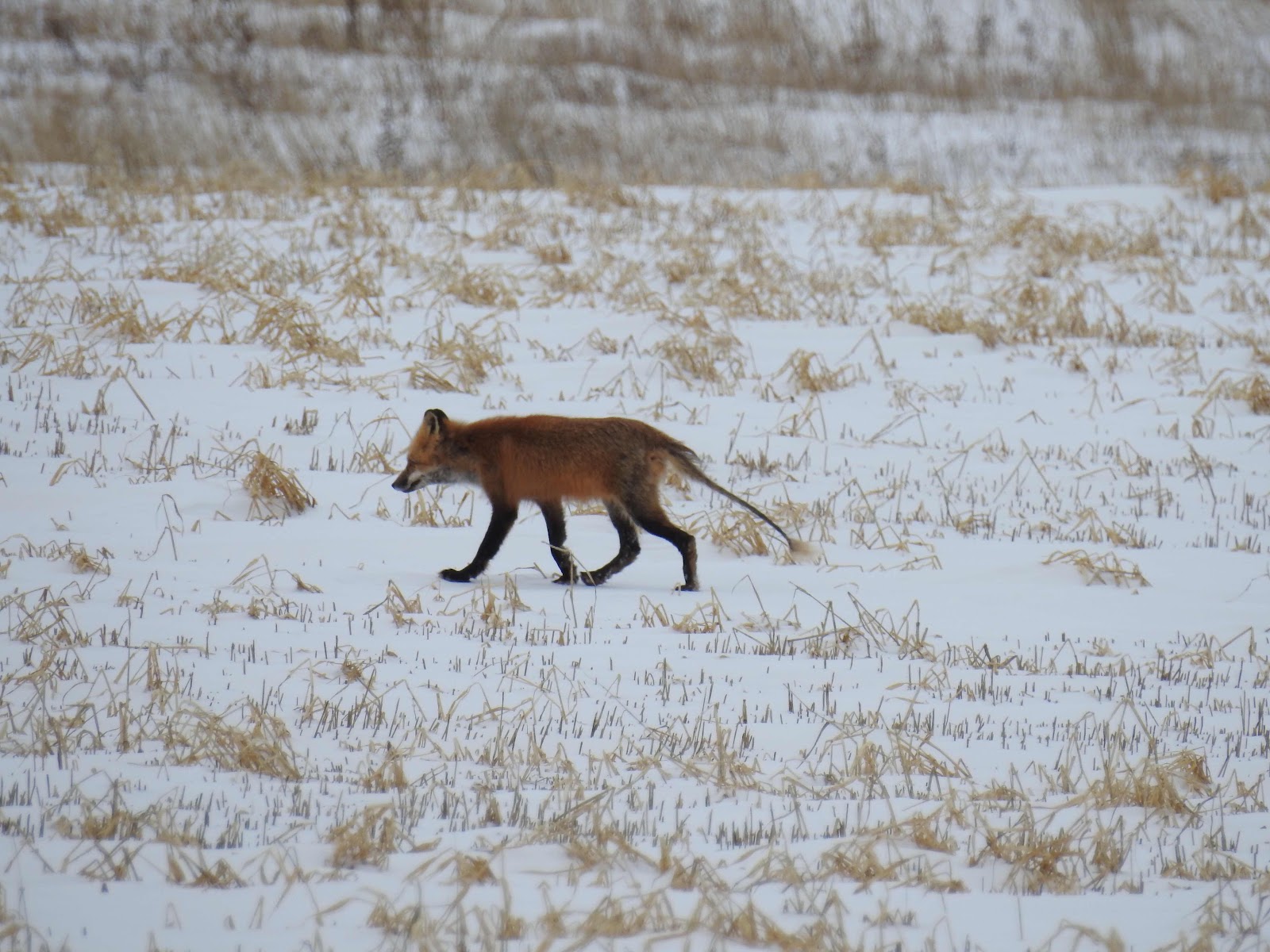 The first cases of mange in island foxes was reported in 2018 though the population recovered and will again. It spreads when dens are crowded.

On a visit to Grand River we saw the domestic geese which hang out there. 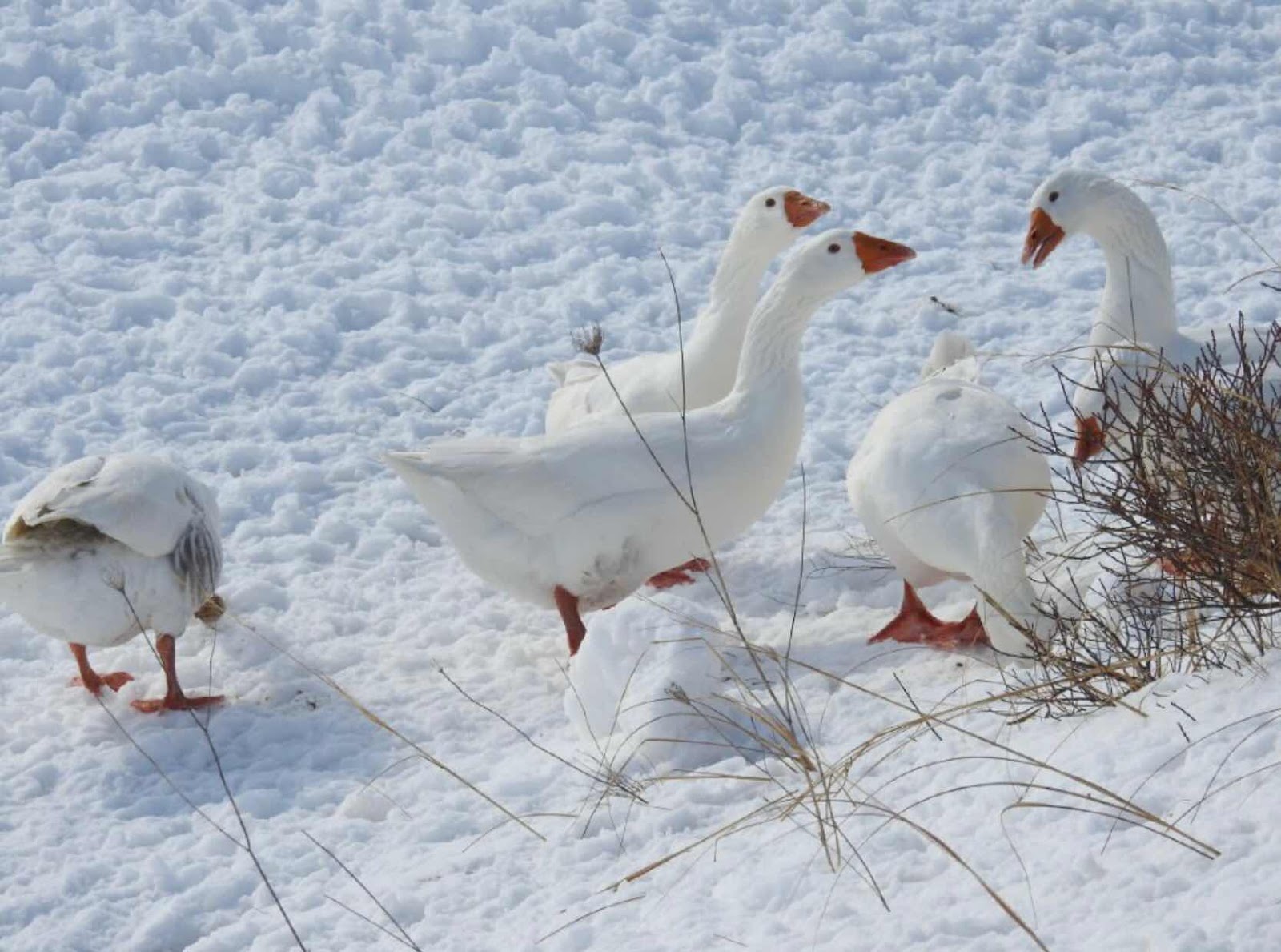 There isn’t a farm nearby so it is a mystery where these beautiful creatures come from. We’ve seen them in a variety of colours over the years but this year, they are mainly white. They congregate in the same area, this time near the bank where the road and river bank meet. They were well hidden and I only saw them by accident as I tried to photograph a huge flock of mallards. Unlike the wild birds, they were unafraid of us and stayed as we photographed them. They are well worth a photo.

A river runs through Tyne Valley, a small community west of Summerside. In the heart of the community, a pond collects the water before it flows over a small dam. 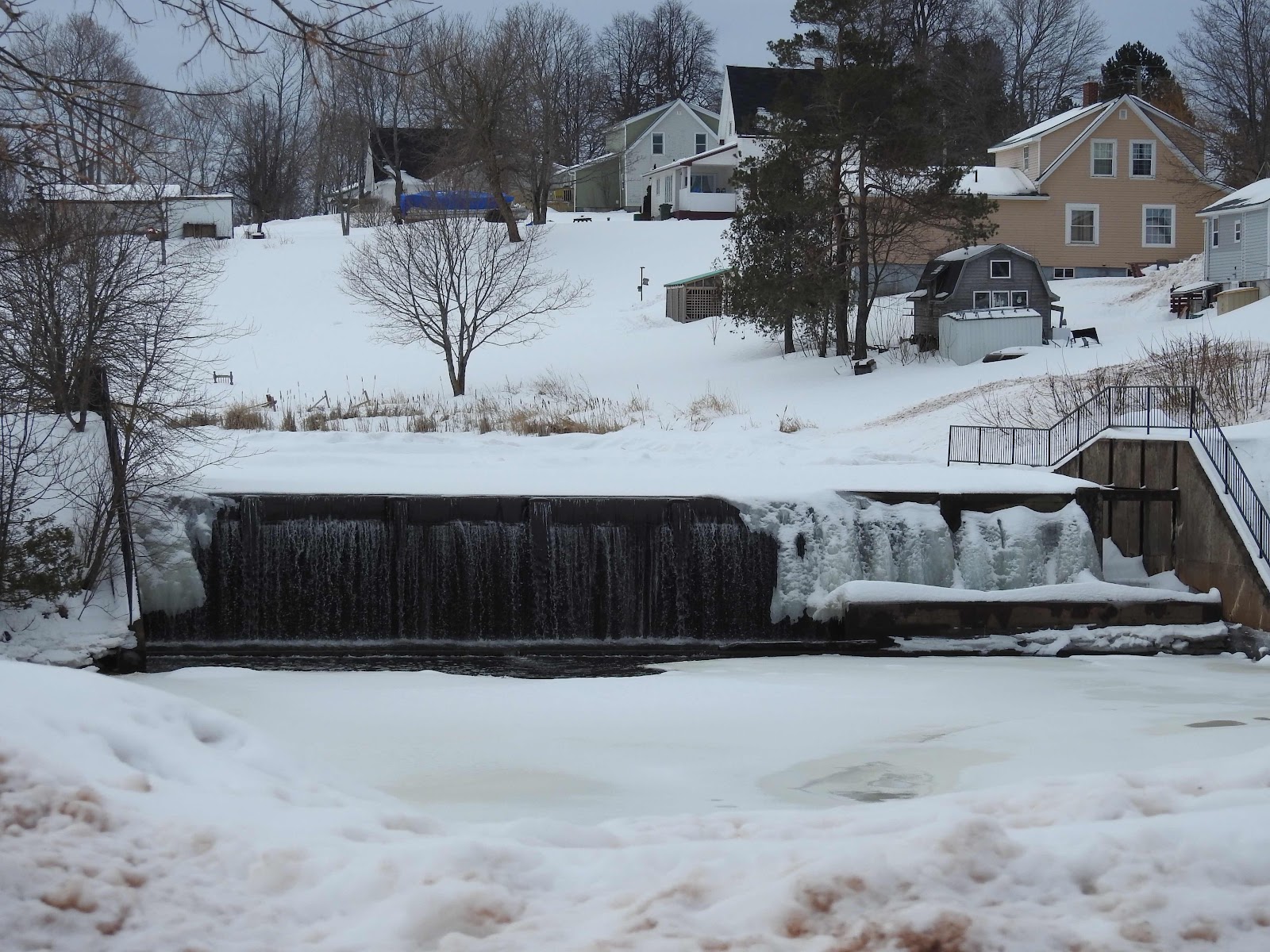 Several homes in this area have a view and a sound booth for the waterfall. As I listen, I imagine a summer’s night with the windows open and the sounds of the water lulling me to sleep.

At the wharf at Malpeque, everything is battened down, waiting out the winter. The inlet is icy and snow covered, the boats high and dry. Fishers decorate the exteriors of some of the shacks. 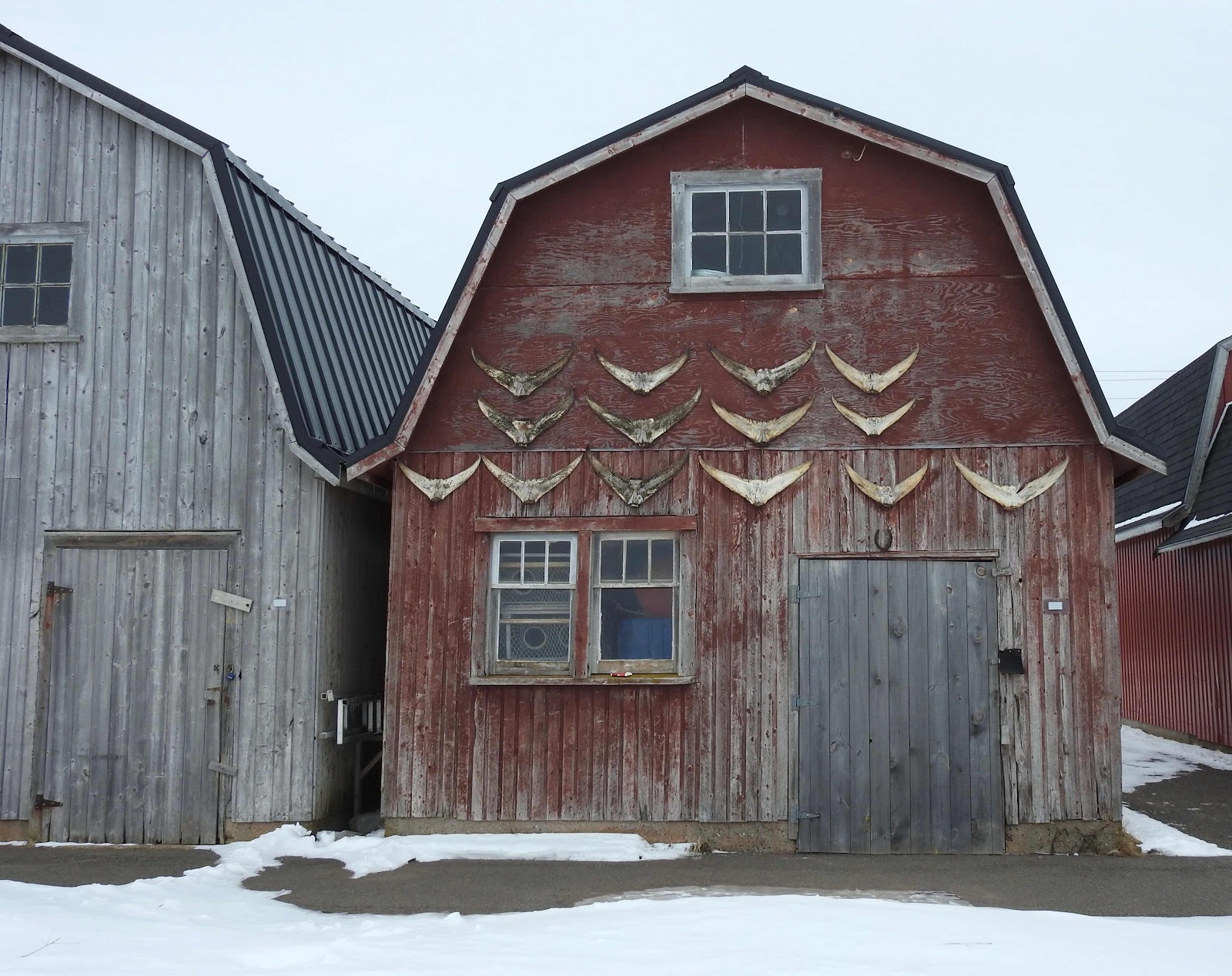 This one has the tail fins of bluefin tuna caught during that commercial fishery which allows one tuna per licensed vessel every year. Inside the shack, you can see lobster traps and other gear. The weathered wood on the exterior has seen many winters. Oh the yarns this shack could tell!

Finally, after such a mild early winter, some recreational fishers placed their smelt shacks on the ice this past month. 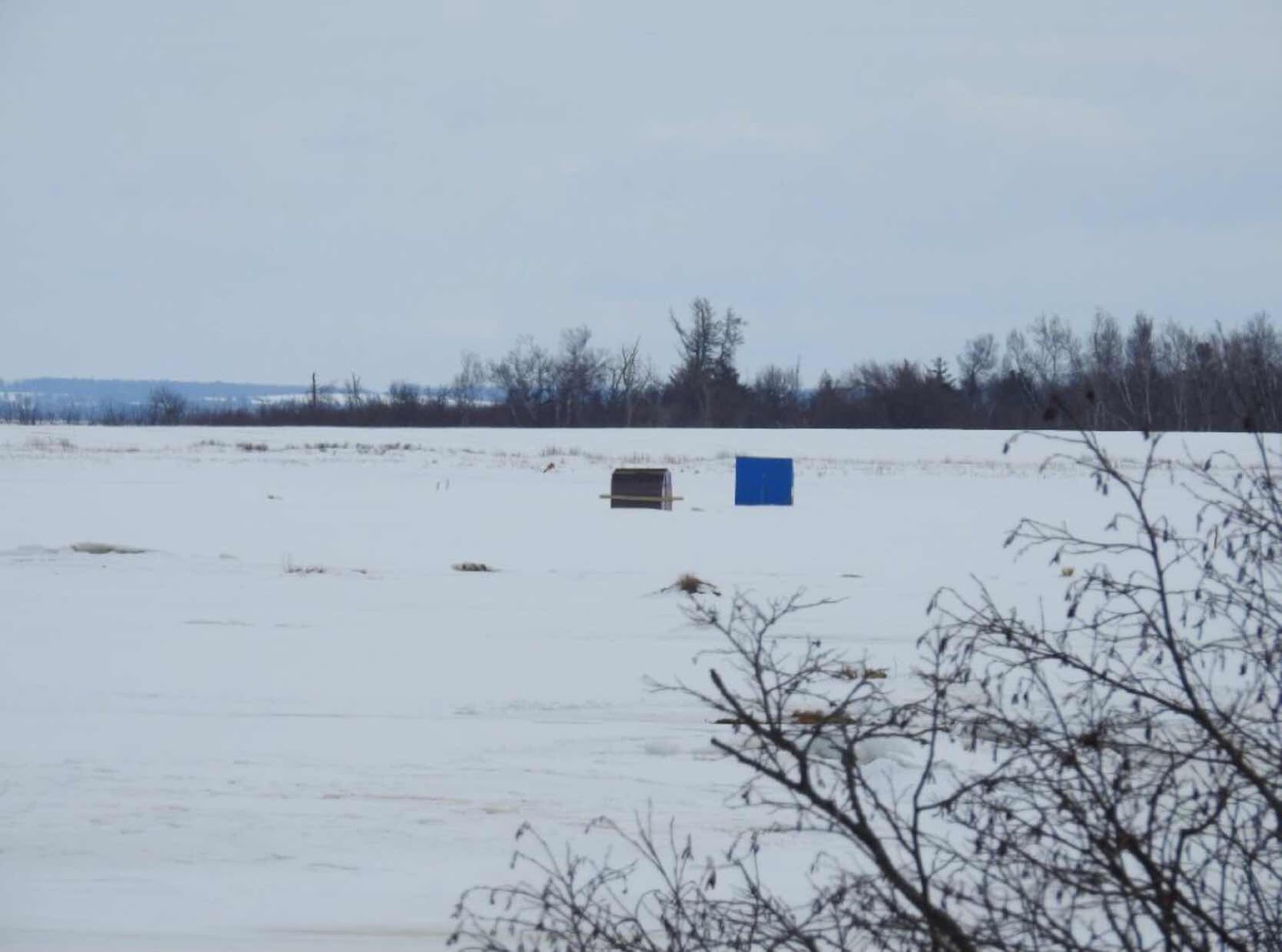 The sight of the shacks is a reminder to buy smelts the next time we visit the fish monger. The little fish are delicious!

We are in another lockdown due to Covid on Prince Edward Island. There are 18 active cases currently, the origin of some is unknown. This lockdown is for the next three days when the situation will be reassessed. Ages 14-29 in our area are being tested, schools and all but essentials are closed. We’ll see how it goes this time round.

Six percent of the population was tested over the last several days and no new cases were reported. We are waiting to see Tuesday’s results.

You folk sure take C seriously. Good for you. I read that Auckland went into lockdown because they had one case.

Great photos Marie! I feel so sorry for the poor fox. The geese sure are beautiful, especially photographed in the snow. I hope all goes well with the lockdown.

I do enjoy seeing the sights in your area. Great sightings of the boat, fishing shacks, the cute geese and the poor fox. I feel sorry for the fox! I hope the lockdown does not last too long. Take care, stay safe. Have a happy new week!

Some wonderful photos - and one very sad one.
I hope your lockdown is effective. I really hope so.

Is the British variant to blame for PEI's sudden boom in Covid cases? I suspect so.

Wonderful pictures, but sad to see that poor fox. I hope your lockdown will be over soon.

We have hardly been out of lockdown in the past year and things do not look like they will change any time soon!!

Your photos make me feel cold!!! I have been gardening all day today and I even cut the grass!

Sad to hear about the fox's situation. That's a nice fishing boat, it will be in the water soon. Thanks for the photos and your narrative, it's always a pleasure to read what you have to say. Be safe and have a great month of March.

Oh that's so sad about the foxes Marie, dreadful to see their usually beautiful tails like this. In Perth we locked down for five days because of one case and the world laughed at us, but we now are living life almost normally while many places are struggling, it really is worth the small inconvenience of a few days 💜

Most interesting to see a large boat sharing the road. i hope the lockdown has the right effect, but mostly i hope we can soon put this virus to the backo of our minds.

brrrrrr, those are some very cold temperatures!! i wonder what the population is there on prince edward island?? those are drastic measures for 18 cases,i am not being critical, i am just surprised!! and perhaps i am growing detached to a lockdown, i sure hope not!! i hope the lockdown does the trick!!

Interesting how so many things happen to make a community functional.

This is a fun post Marie with such a variety of subjects. The white geese look almost unreal and very sure of themselves.

That goose on the right appears to be lecturing the two in center.

I am glad that Covid outbreaks are being taken seriously, even if it means a lockdown. I just got back to my exercise class today after about a month of lockdown, but we came out of it pretty clean. I live about an half hour drive south of Anvilcloud and came to your blog through him. You take beautiful and thoughtful photographs! Especially like the one of the geese.

I sure did love all the pics from this post. I just really enjoy seeing your area. I feel so bad for that fox...I hate to see any creature suffer.

I am sorry that your area had to have another lockdown...

That poor fox does seem to be in very poor condition. I hope that the end comes swiftly. As for the domestic geese that is a bit of a mystery. Usually farmyard escapes join up with flocks of wild geese and interbreed, but this group appears to have remained aloof.

Could they be wild geese?
Poor fox! One walked through our garden recently and he was in extremely fine fettle.

Again I will say how beautiful your area is but how very cold!

Such a nice photo of the geese. I feel sorry for that poor fox. I wonder if there is anything that can be done to address the mange.

WSeeing wild animals in winter amazes me, so hardy. What a wimp I am. Glad your outbreaks a treated seriously. Ours did not at first and our city is still on the "very high risk' level. Shame on us. Pretty much every one masked now. that wasn't true at the first few months. Grrr.

For the kind of winters you have, I think you get out a lot. As much as possible anyway. The geese are beautiful, but I'm scared of them, as I've been aggressively pursued by their brethren on several occasions.

Oh poor fox...we have had problem with that here on the island too. They look terrible and suffer.
So much snow you have! Here we have had some lovely days now, sunny and I guess Springtime is just round the corner :)
Love from Titti

feel sad about the infected fox....hope, they recovered again...

pretty white geese and all photos.

# Hope, testing results for Covid 19 are great... and daily activity returns to normal

Love those geese, and I too feel sorry for that poor fox. Nature can appear so cruel sometimes.
Enjoy your smelts! :) xx

Poor fox,it is always fascinating to see the landscape,wildlife and buildings where you live. Sarah x

I enjoyed seeing the sights from your excursions. It's sad about the foxes, though.

My Italian grandmother used to make fried smelts every year as part of Christmas Eve dinner. I haven't had smelts in yonks!

Oh my - it's so cold there!!! I'm sad about the poor fox. I hope he recovers. The white geese against the snow is such a lovely photos! I think it's great that they take the virus so seriously there and act quickly. Otherwise it will get out of control like in the US.

It is always a delight to visit your blog, Marie. Wonderful images yet again of your winter landscape, that I can only imagine. The first image of the boat being transported is marvellous. I have been following the PEI news and watching the Covid nos rise. So glad to see this morning that the red-level lockdown will be removed tomorrow. PEI health have been doing an exceptional job.

Such a shame about the fox. the geese are really beautiful. I haven't seen that variety before. Love all your wonderful photos.

So much to see and to learn about PEI.
You are the best reporter/photographer ever!!! : )

oh geese are GORGEOUS indeed so beautifully captured by the master mind :)

i found the house and door so fascinating and intriguing

sending best wishes for you and family!

Well, if the Eagle is noble, the Goose is downright funny. I can just hear funny cartoon chatter coming from them. What fun you have seeing so much wildlife.