With the advent of a New Year, I spent some time going through photos of the past year. I enjoy animal photography, so these are my favourite animal photos from 2017.

This fox thought we would feed him and so he approached the car, though cautiously. 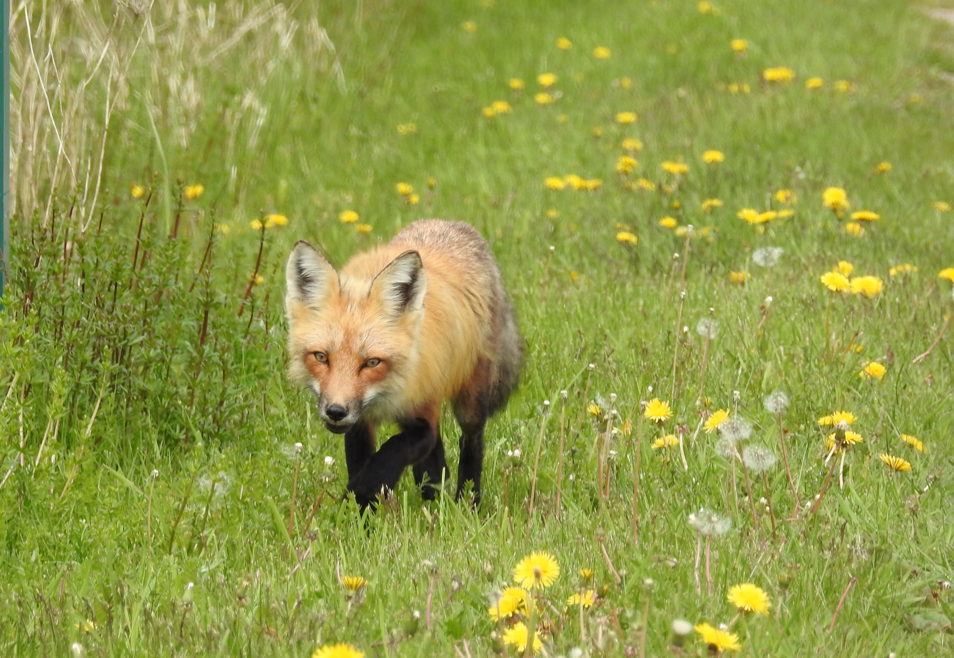 A rare capture of a red squirrel peering out from a feeder. 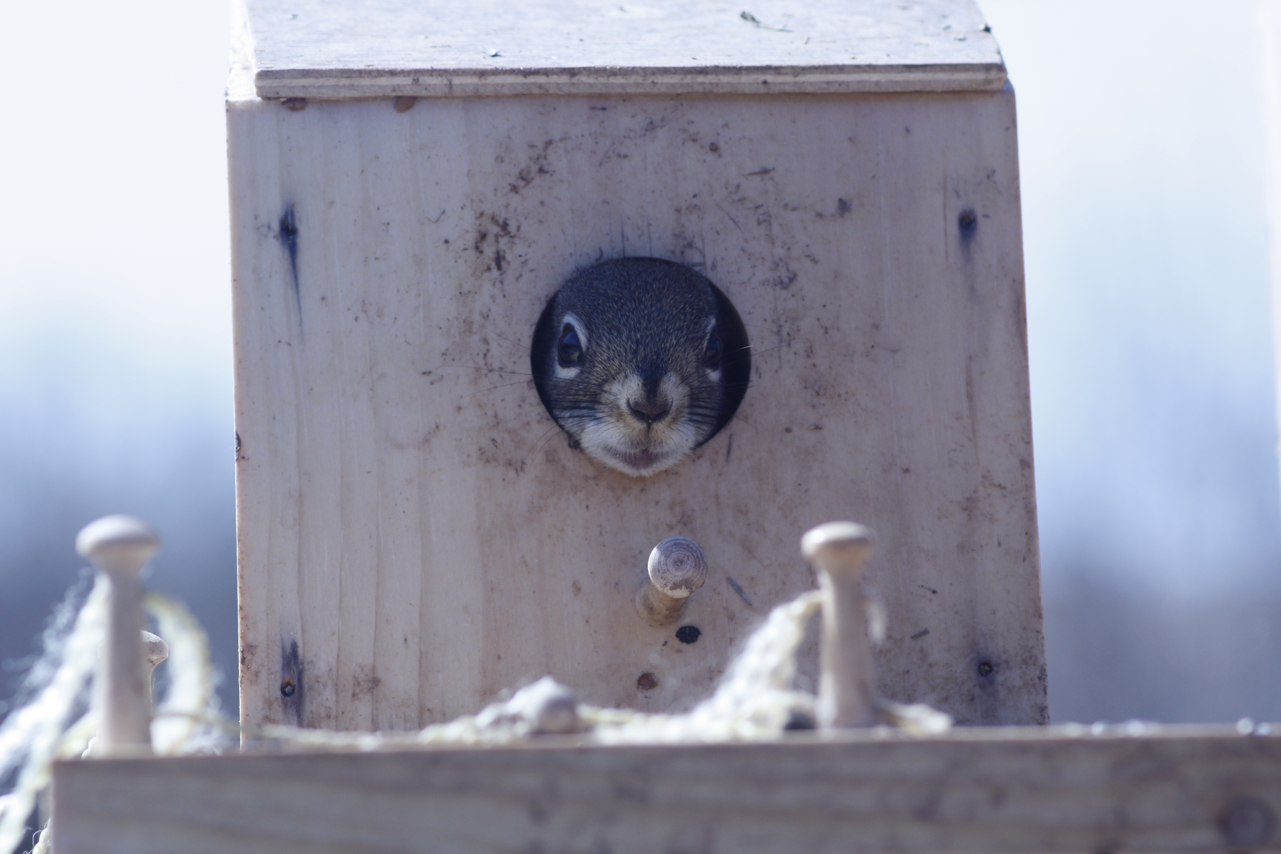 This bald eagle was one of two perched on sand dunes in the National Park on Prince Edward Island. The squirrels usually chase away the chipmunks, so I was lucky to capture this photo. The harbour at French River is a favourite habitat for blue herons. The kingfisher and the yellow-bellied sapsucker both liked these perches above the stream in Summerside. A greater yellowlegs enjoyed the seaweed along the shoreline. 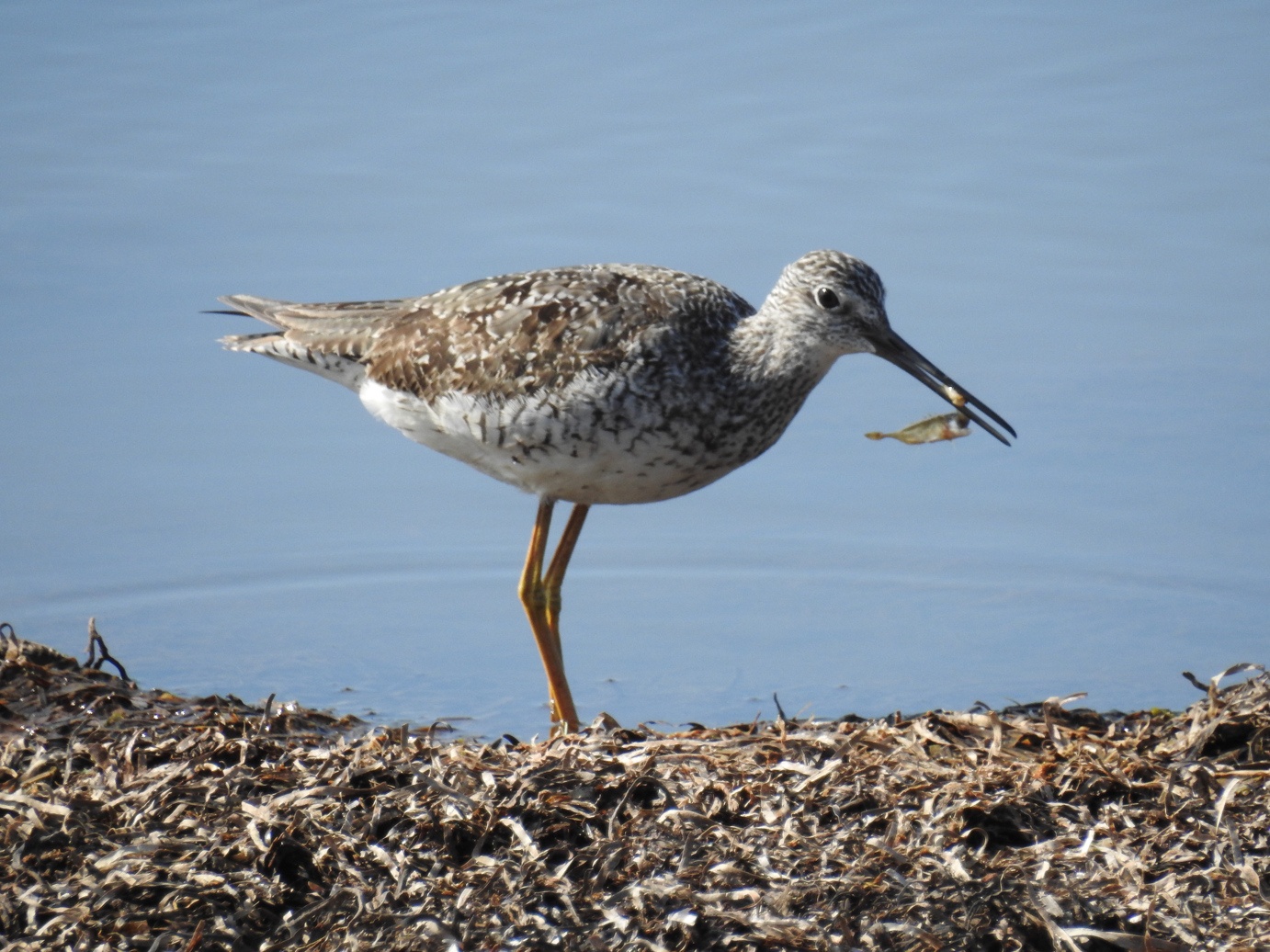 Three cormorants shared the tree above a pond, waiting to catch lunch. Plovers and sandpipers often feed together along the shore. 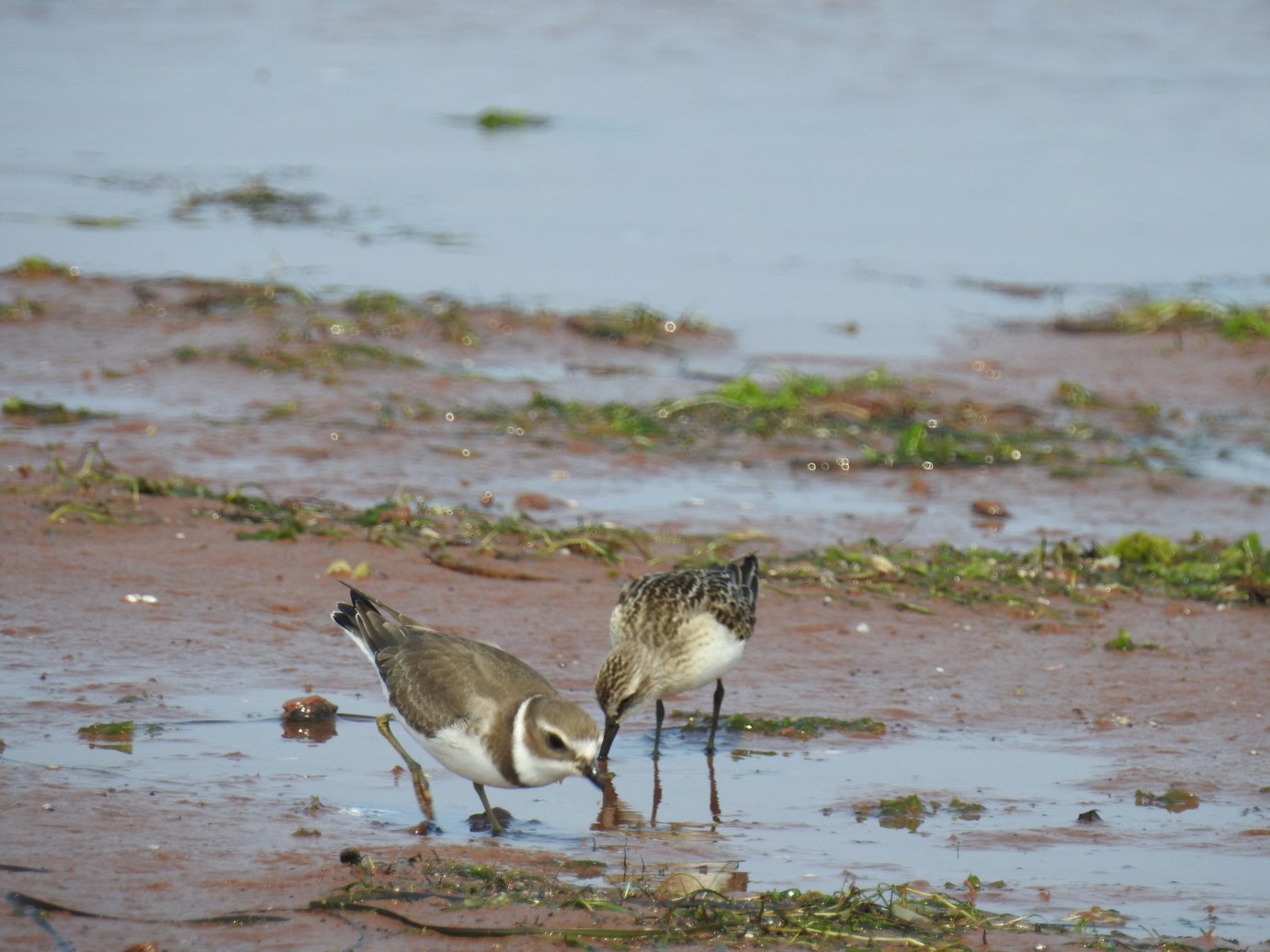 A tiny bank swallow looks out from its nest. 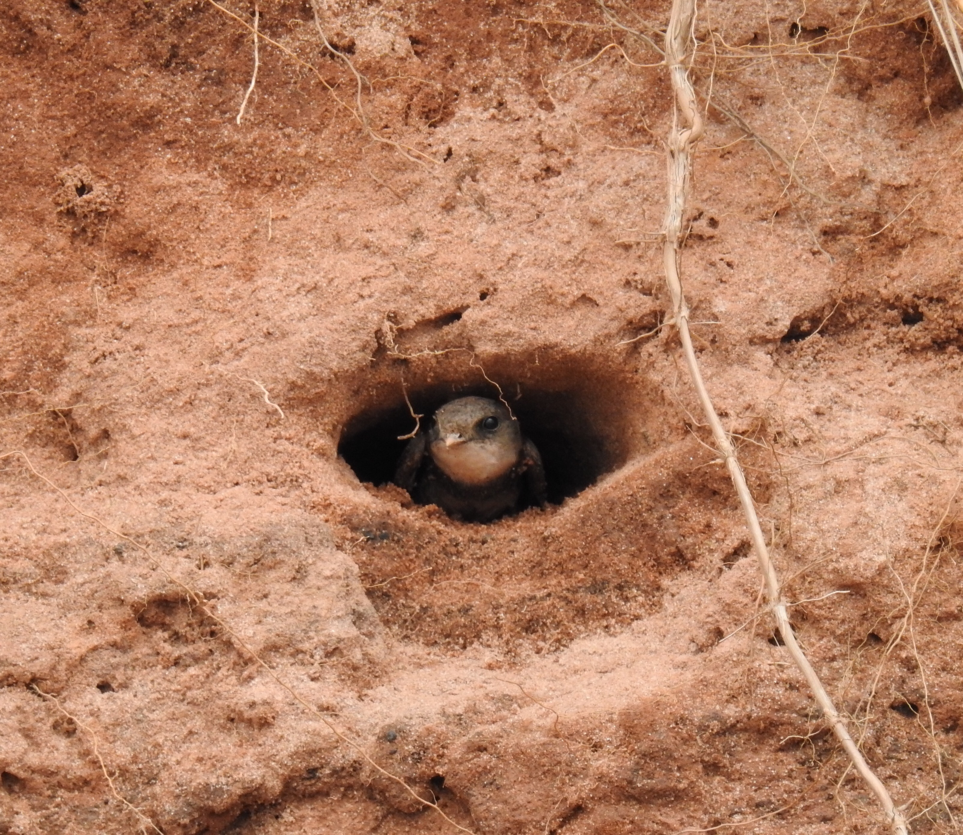 This male mallard posed for a photo. 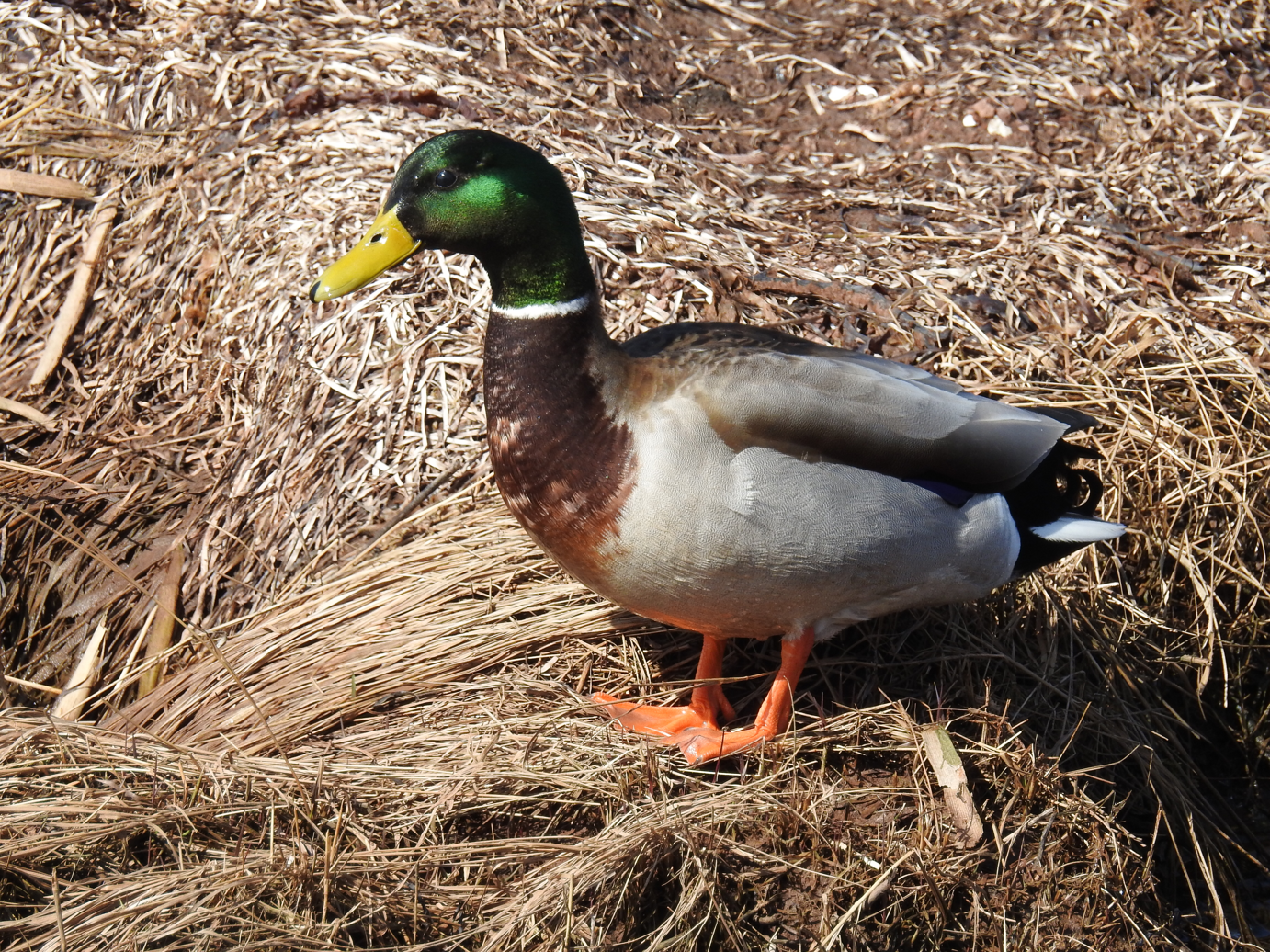 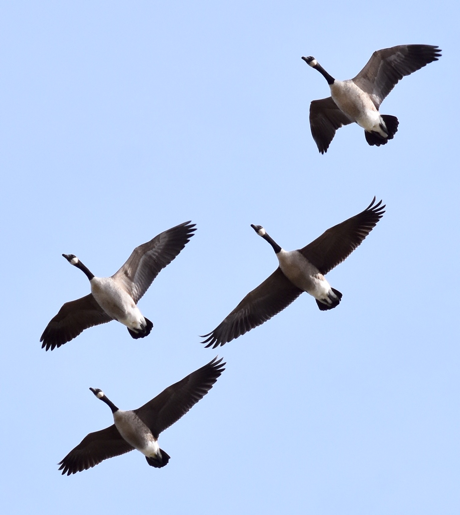 For two years I attempted to take photos of muskrats. Finally, late in 2017, I was in the right place at the right time. Great idea, Marie. I would never think of doing a theme like this. Well done.

you selected some amazing images from 2017!! i had a few favorites, the bald eagle for sure and i really like the fox. we are lucky to have and appreciate such beautiful nature around us!!

ooooh and my beatlemania post was meant for tomorrow, i messed up the dates. so i took it down, today is yarn along and beatlemania will be tomorrow. sorry, i know you commented on both!! that's what happened when i try to schedule posts!!

Excellent series of images Marie.. it's always a buzz to capture good bird/animal shots, it enhances the enjoyment of the walk considerably ✨

It is such a pleasure to visit this blog!!

Wonderful photos!! Such a great variety of wildlife shots that you have captured! I really like the cormorants!

Love your critter photos. I have never seen a muskrat in nature although we have some rushy ponds about an hour from here where they should be. You've inspired me to go back and look with more patience.

What amazing photos. You have captured life beautifully.
I love watching all the critters going about their business.

Some great captures - and wonderful memories.

Chipmunks and herons; I spent years making the perfect photographic capture. Next I will attempt eagles and buzzards.
Your photos are spectacular; please don't stop.

It was lovely to be reminded of these fantastic images. I just don't know how you manage to capture them so well the geese would just be a blur in my pictures! Sarah x

What a wonderful collection of wildlife. I love them all, definitely enhances your walk and makes it a treasured memory.

That fox is a beauty.

Wow! They are all super wonderful. I am so glad that you have shared them with me. :-)

Amazingly wonderful. We have crows, skunks, and maybe a coyote. Never do I see the later two, but we can still smell the skunk. I so enjoyed to see these wiod critters.

My favorites are the red squirrel and the bank swallow! sweet! Andrea

Your nature photos are awesome! I just don't have the skills with animal photos. Very beautiful! Thank you for sharing!

We are lucky indeed, Debbie.

I would never attempt to schedule posts like you tried, Debbie. I am not tech savy enough! You are braver than me.

Thank you, Catarina. Such a nice thing to say!

I love the cormorants too, Jenn. They were such a surprise that day by the pond. We had only ever seen them by the bay before this occasion.

The muskrats hide well, Celia. Patience is a must!

Me too, P. Thanks for visiting.

Thanks for the encouragement, Joanne!

Multiple shots in rapid succession captured the geese, Sarah. I don’t know about Fstops and such.

Thanks, Bill. The animals are such a bonus.

Thanks, Mage. We have limited wildlife here too. When we visited Nova Scotia last fall. We were thrilled to see a deer. We don’t have them here.

Those were so cute to see, Andrea.

Thanks so much for the feast of photos ... I love the muskrat! Wishing you a happy and safe New Year to you and yours Marie. Your blog is a treat !

Thank you, Ginnie. That muskrat was a big one. We saw others later and they were much smaller.

Thank you, Angela. I just point and shoot really and take lots of photos to get one good one.

A superb collection, Marie. Were the bald eagles sitting right on the sand? I didn't know they did that!

The kingfisher is the one that impressed me. I can barely raise the camera and he is across the river!

They were about 100 meters apart on sand dunes looking out over the area between the dunes and the road, Jenny.

That bird was watching the water, waiting for movement. She stood perfectly still for a few minutes, Tabor.

I have that many pics of red squirrels, FG.

OMG, Marie. These are absolutely fabulous images of animals and birds. You can be proud of yourself. BRAVA.

It's funny how we look at wild animals and just want to hug them and touch them. The fox just looks so cuddly. Hahaha.

We feel connected to the animals maybe, Barbara.