We have stayed close to home this winter and the occasional day when we’ve ventured forth are days without much wind, a rarity to be sure. Dressing for the cold is easy, the wind is another issue entirely. However, the days we are out and about, we have enjoyed the time immensely. The glory of nature is evident everywhere we look and we take in as much as we can every time.

On an 8 degree Celsius day, the ice in the harbour looked like spring break-up had started. 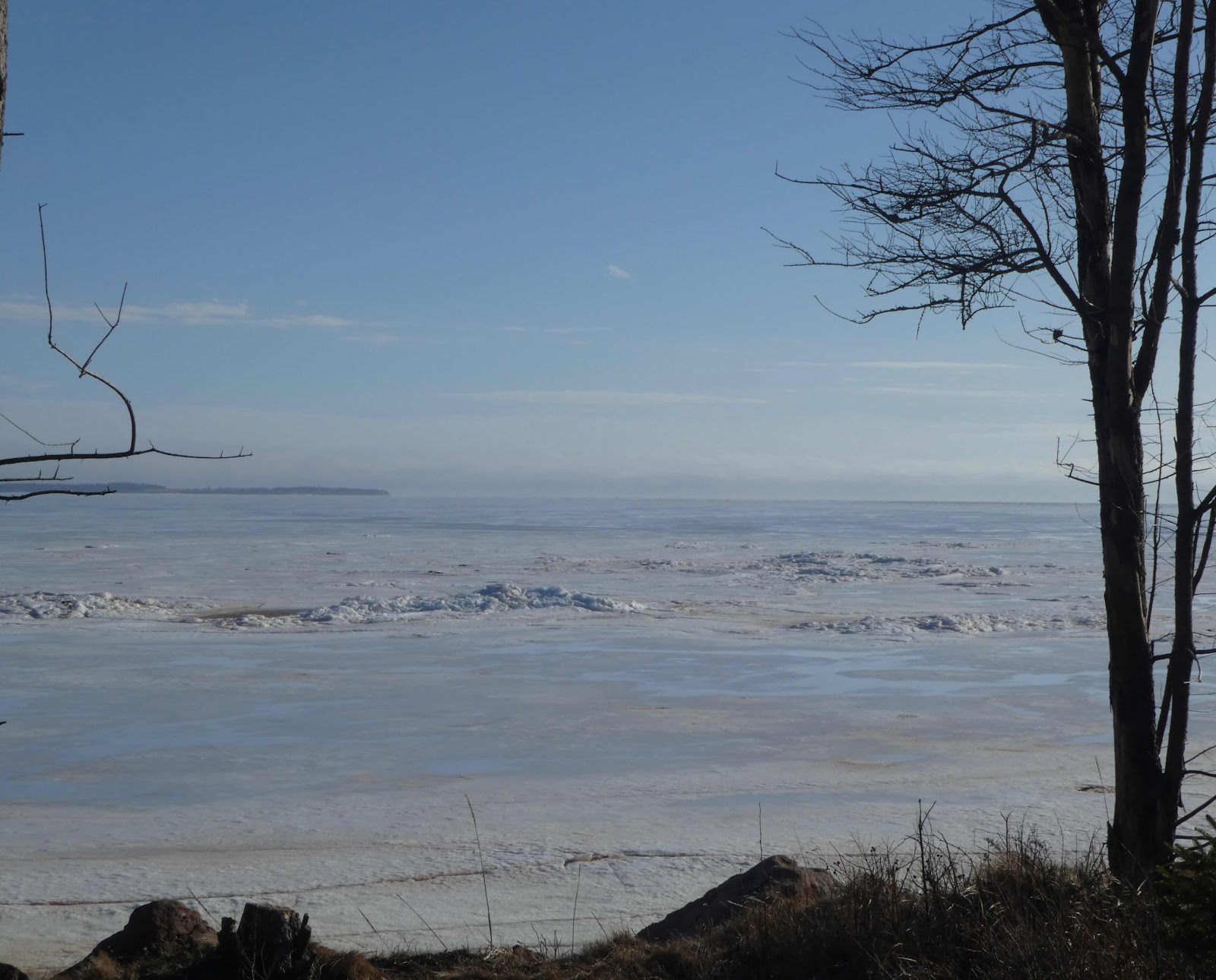 There was a delicate line between sea and sky, just visible on the horizon as white and blue co-mingled. Closer to shore, the sun highlighted the lighthouse almost enough to create a reflection amid the blue glow. 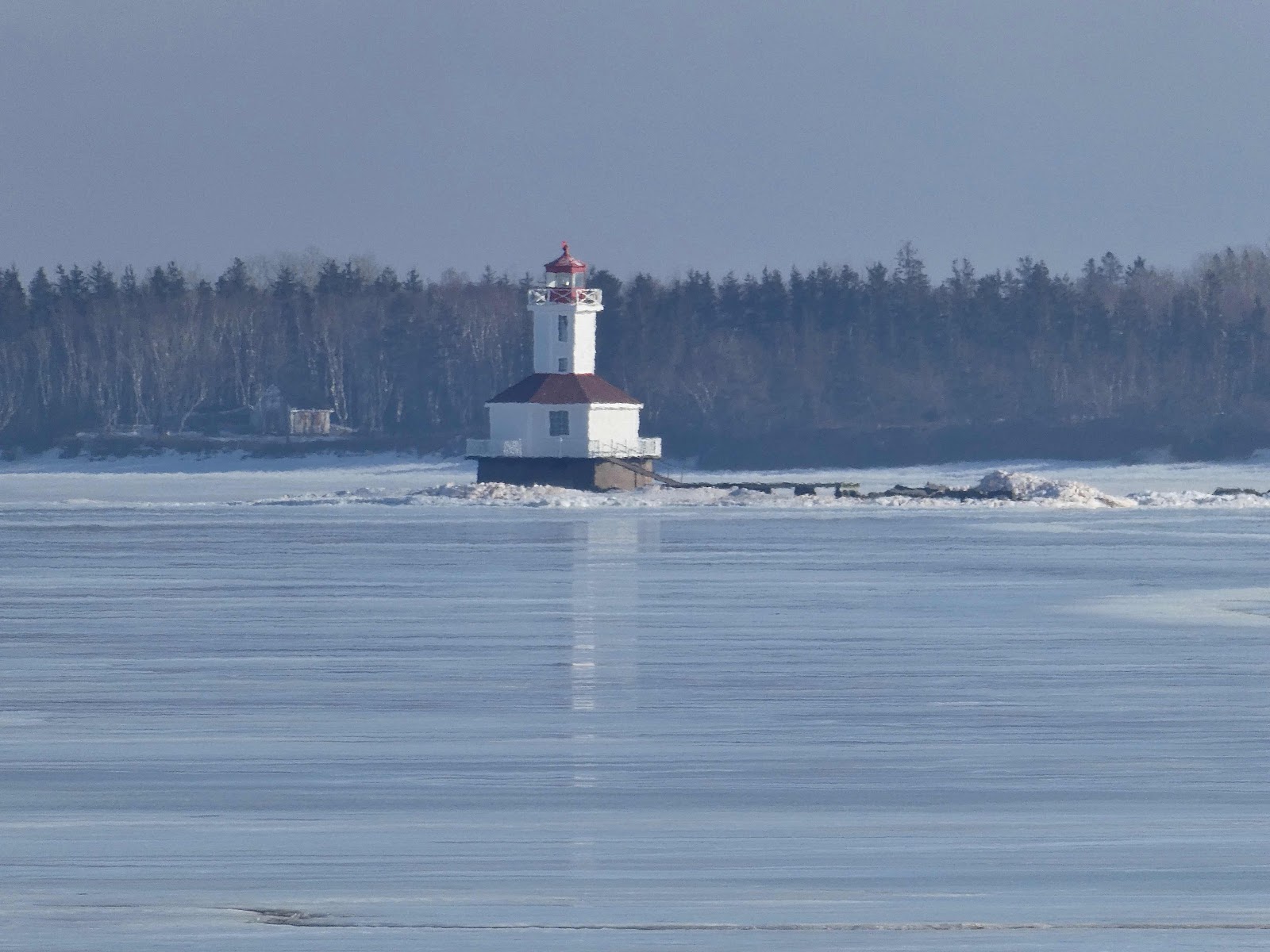 The animals along the boardwalk enjoy the hint of spring as well. We heard a small flock of American Black Ducks as we exited the car. More than a dozen hang out around the flowing water of the salt marsh. I tried unsuccessfully to take video of this orange-legged beauty which was quacking up a storm. 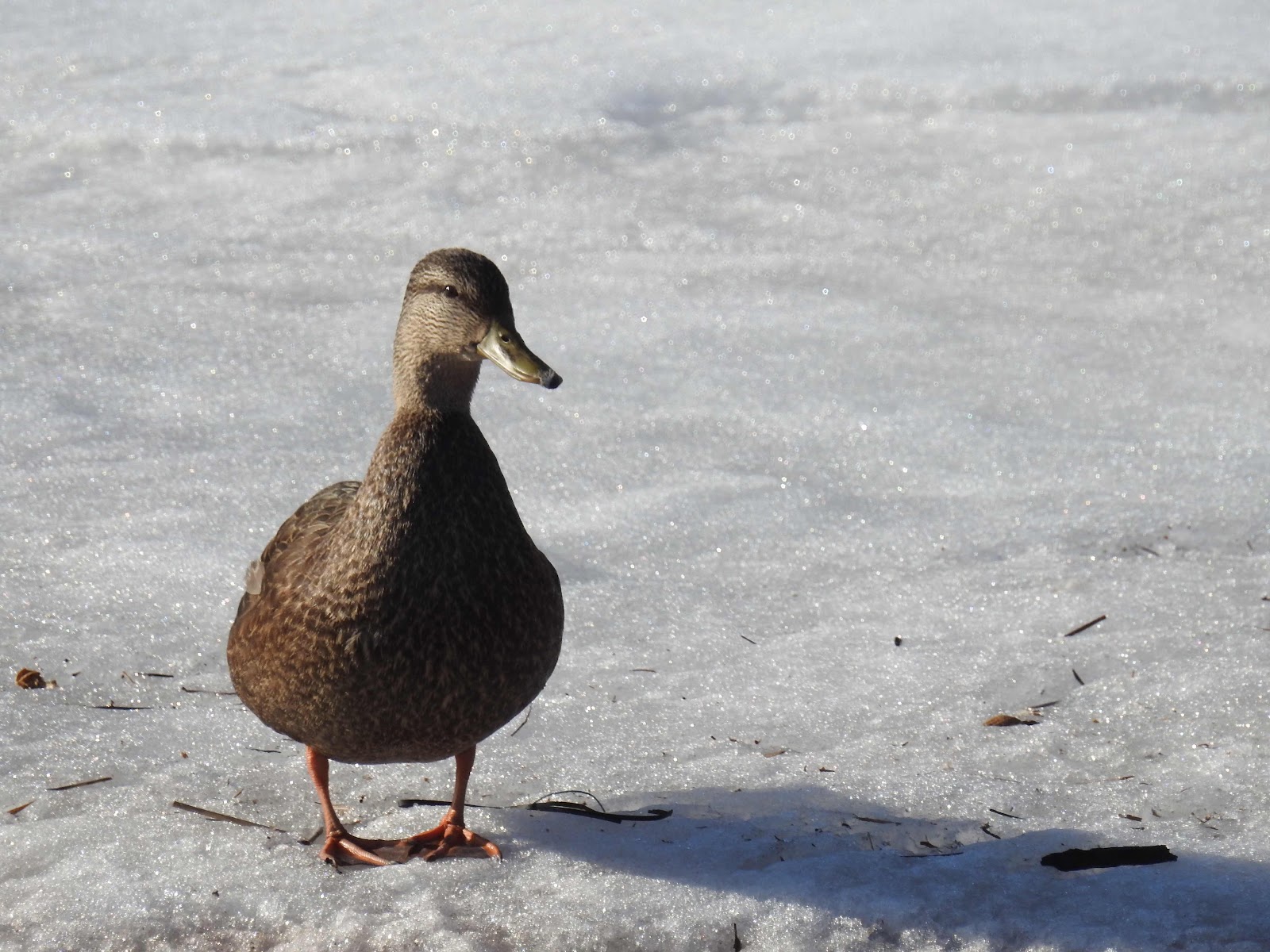 She looks quite pleased with herself and the day.

Another spring-like day we drove north to Cavendish. We were the only people in the area as we walked to the beach. The sea ice had moved off-shore and was barely visible on the horizon. Looking west along the coast, one can almost conjure memories of this beach in the other seasons. 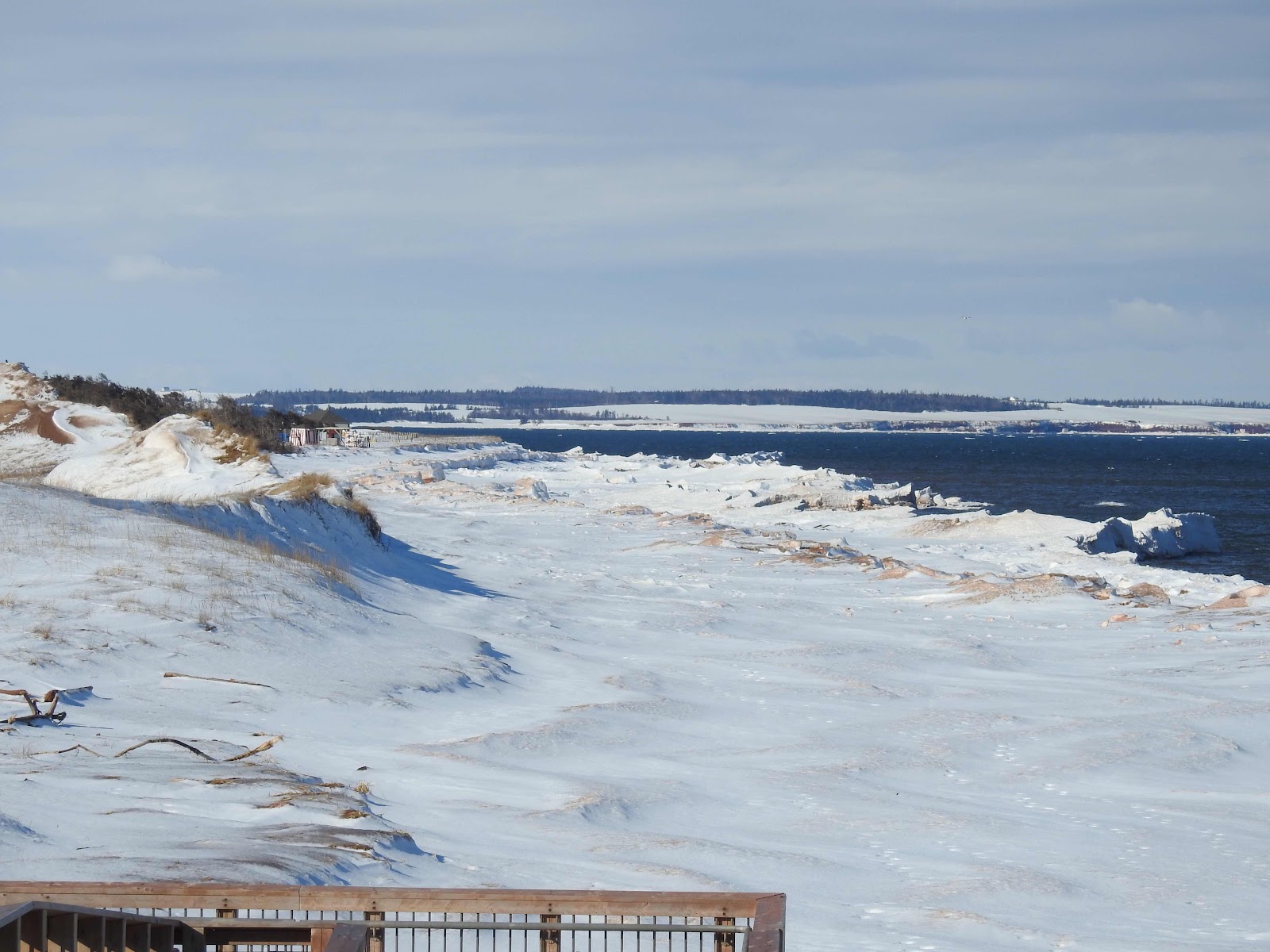 As we move away from the shore, a hardy evergreen, looking more black than green this time of year, reveals the direction of the prevailing wind. In its effort to survive, the tree leans rather than breaks. 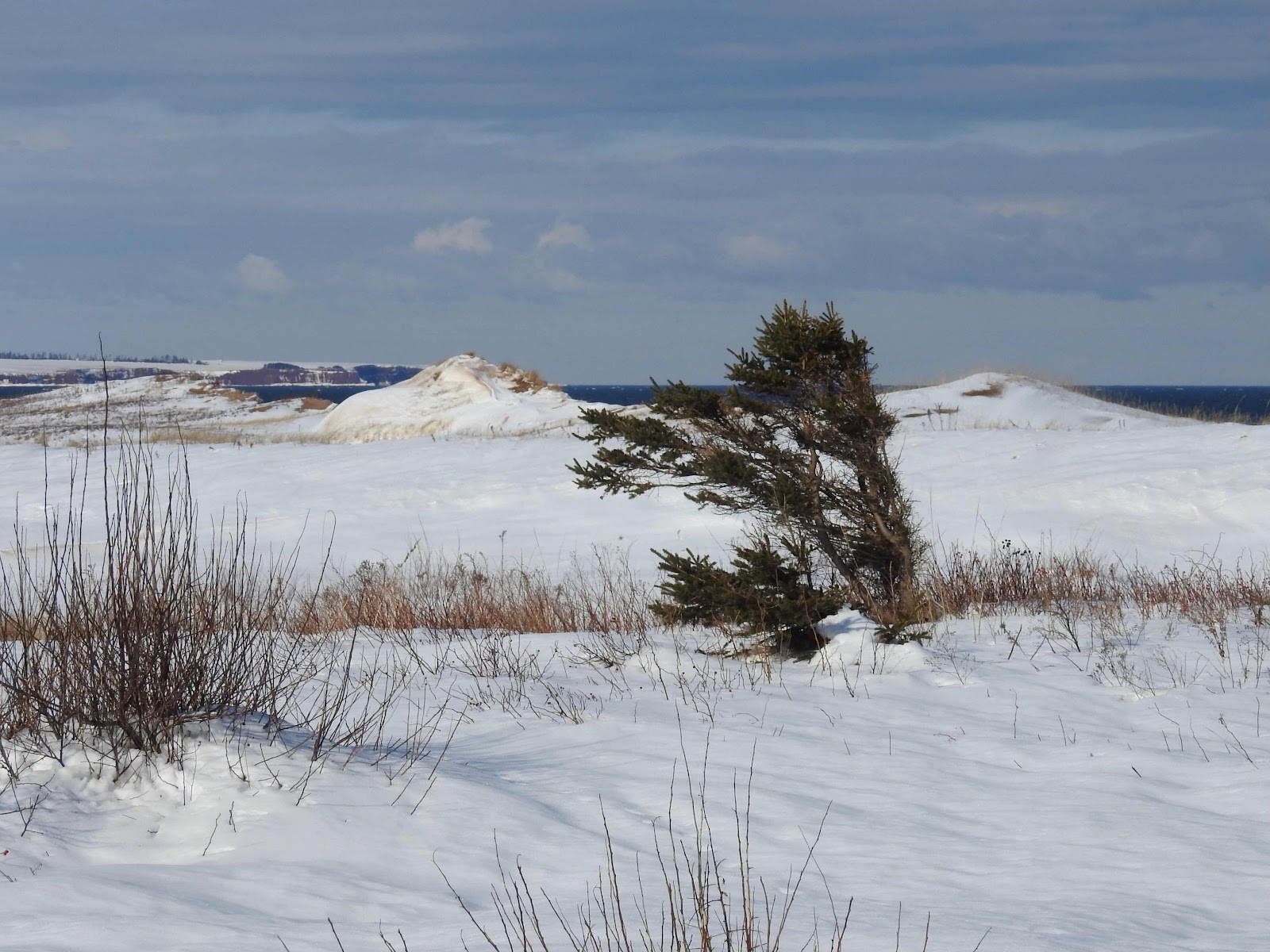 Further along the coast, at MacKenzies Brook, the sea continues to carve the coastline as the sea arch is closer to collapse with each season. 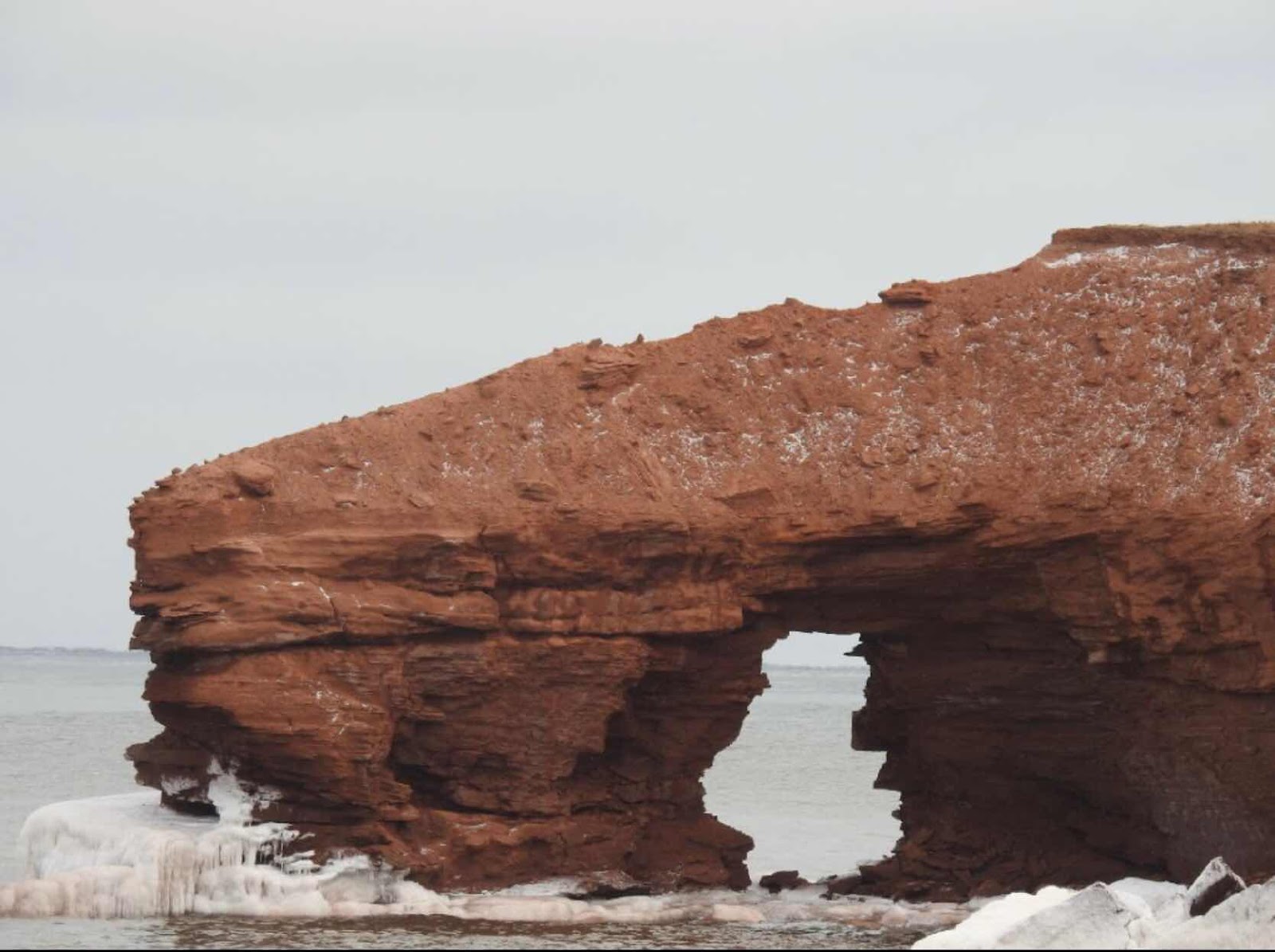 Sandstone is no match for the reach of salty hands from stormy waves. We are witnesses to the beauty of her work however. 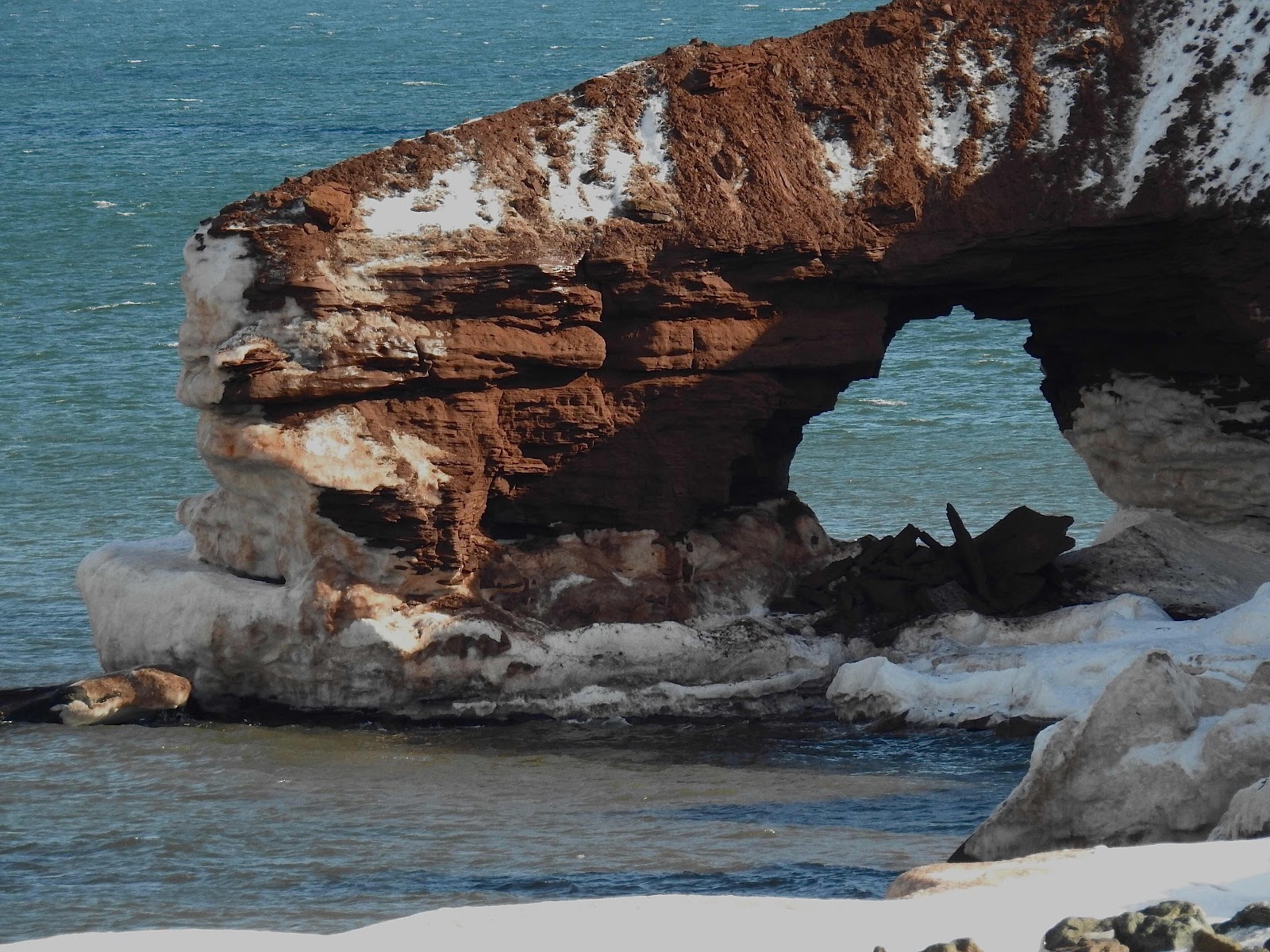 We enjoy every minute.

Time in nature provides respite from the news these days. We appreciate the peacefulness around us when the images of war and people fleeing their homeland fill the screens. We support the Red Cross and our country’s effort to accept refugees.

I can better understand how our parents and grandparents felt in 1939 in a world on the brink of war.

Just grand and not

Spotting birds in nature is grand. Throw in the Grand River and one can be overwhelmed with grandeur!

We found the large flock of Goldeneyes on the open, fast running water near a bridge on the Grand River of Prince Edward Island where they return every year for a winter visit. I always enjoy time watching these small diving ducks and I stay as long as the cold allows. 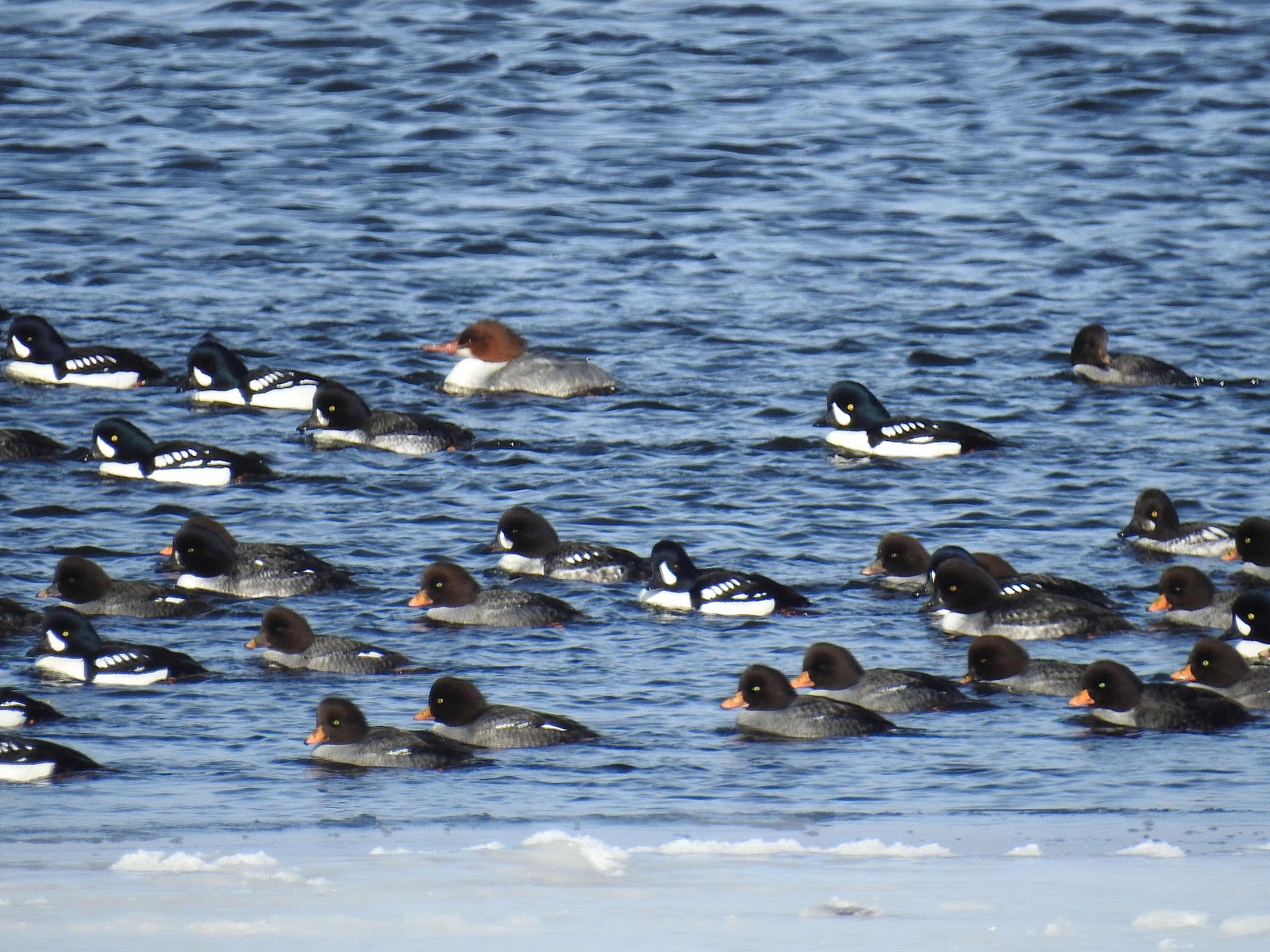 while the Common Goldeneyes have a white circle. 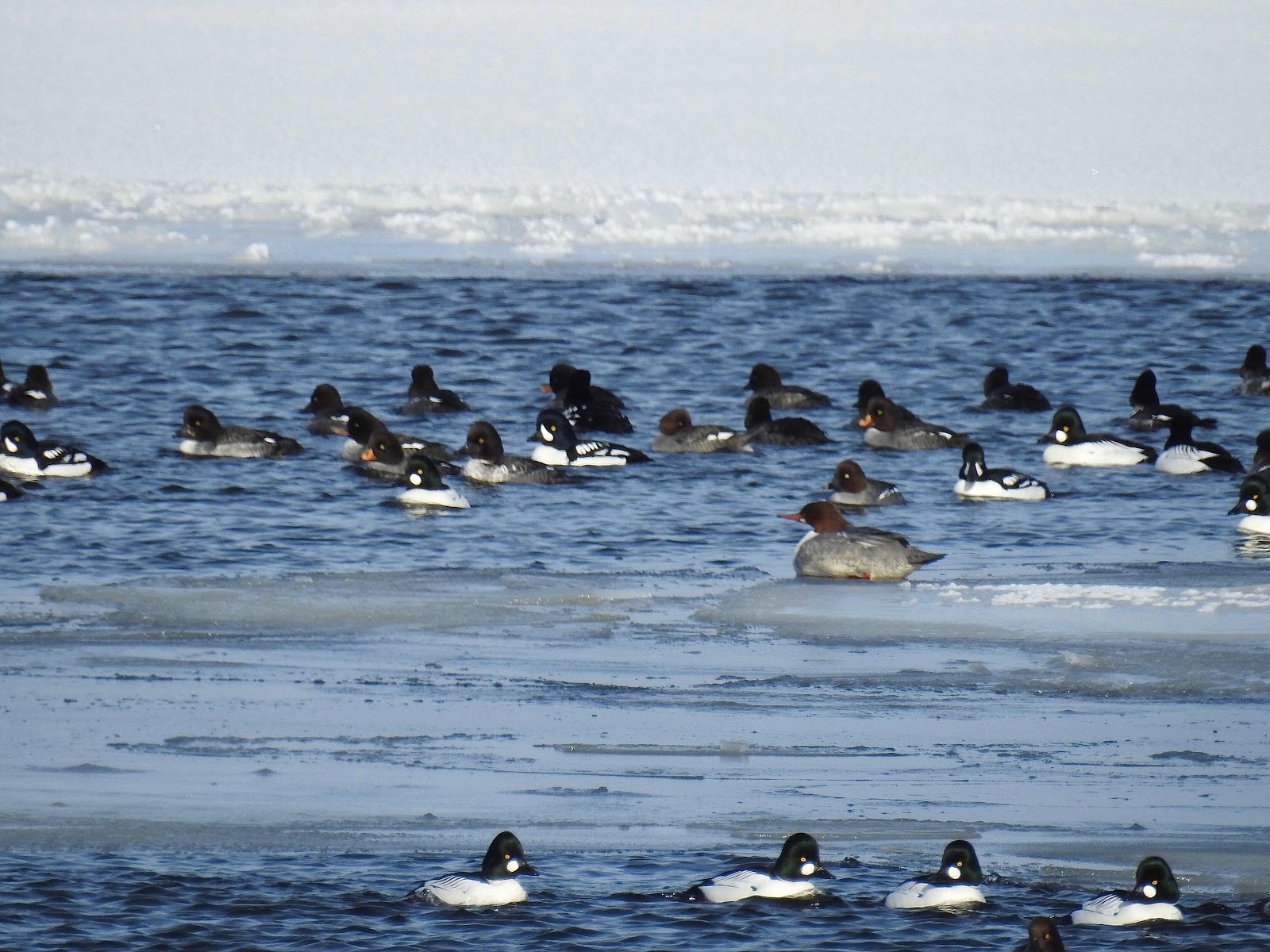 The female Barrow’s are brown and have an orange beak while the female Common Goldeneyes look similar with a darker beak. It is interesting to watch these birds, such fast, proficient divers as they zip below the surface and reappear a short time later.

Among them, Common Mergansers are comfortable going about their business too and although they are bigger than the Goldeneyes, the species co-exist nicely. The black and white male Mergansers, front in the next photo, are followed by a female. 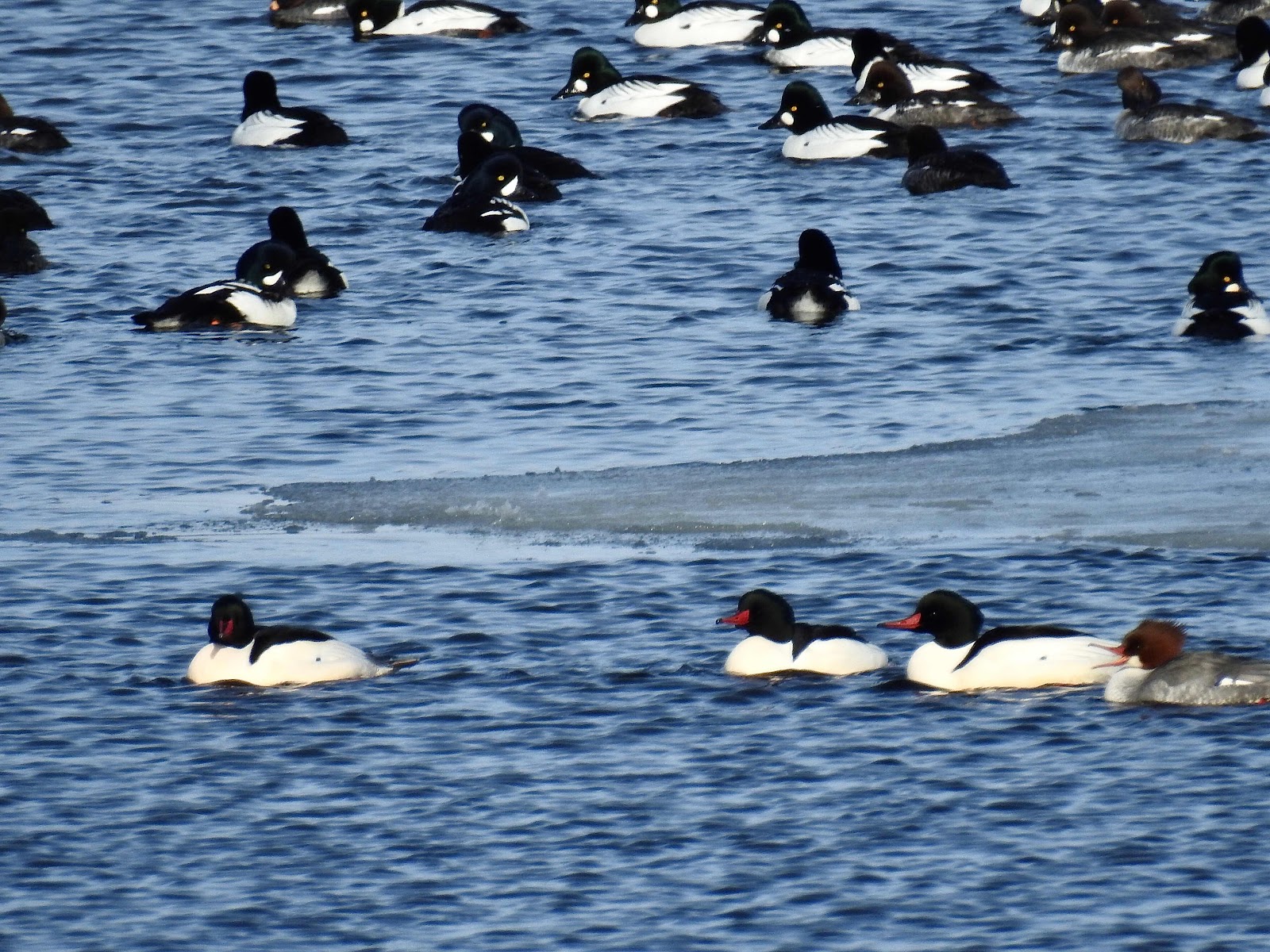 I took video of the birds diving and resurfacing and towards the end of the video, you can see the Goldeneyes lifting their heads and tipping them over their backs with their bills raised skyward. This is usually followed by a kick and forward motion in the water which I didn’t see here. It is part of the mating ritual however. See the video here.

Meanwhile, on a stump a distance away, a Bald Eagle watched the scene eagerly. 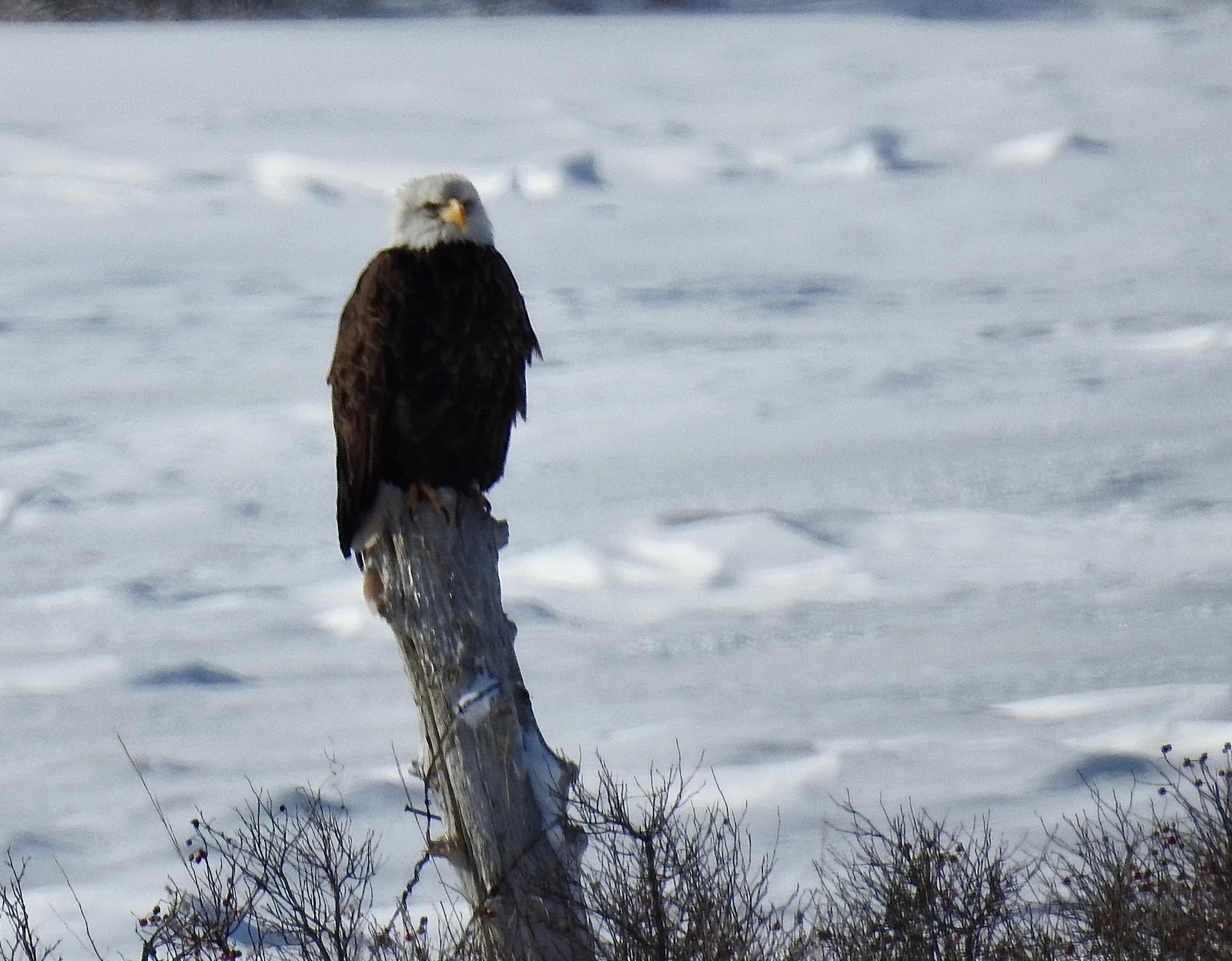 It was too cold to stay and wait for it to hunt or fish but I judged myself lucky to have seen such grand birds.

Now for the not so grand:

I wrote a few weeks ago about the number of items around the house which have broken recently. Well, it continues! The new stove, a Maytag purchased late December, has a large burner which is stuck on high regardless of what temperature you select. It worked properly for six weeks. We are waiting for the repairman.

The heat pump on the main level of the house stopped working and we are waiting for a part. That could be some time. It is an LG like our previously infamous stove.

One of the toilets is ghost flushing. It’s one of those no touch flushers which now flushes excessively when anyone comes to visit. And only then! We have a new toilet to install, a regular one this time.

We have come to realize, this day and age, it doesn’t matter the brand you have. You can expect the worst any time with any brand. Also, any issues with respect to the house or anything in it become more difficult to handle as the years progress and we decline. That makes enjoying now more important and we are glad to be able to handle everything today. Onward…

Who knew that starlings doubled as love birds? 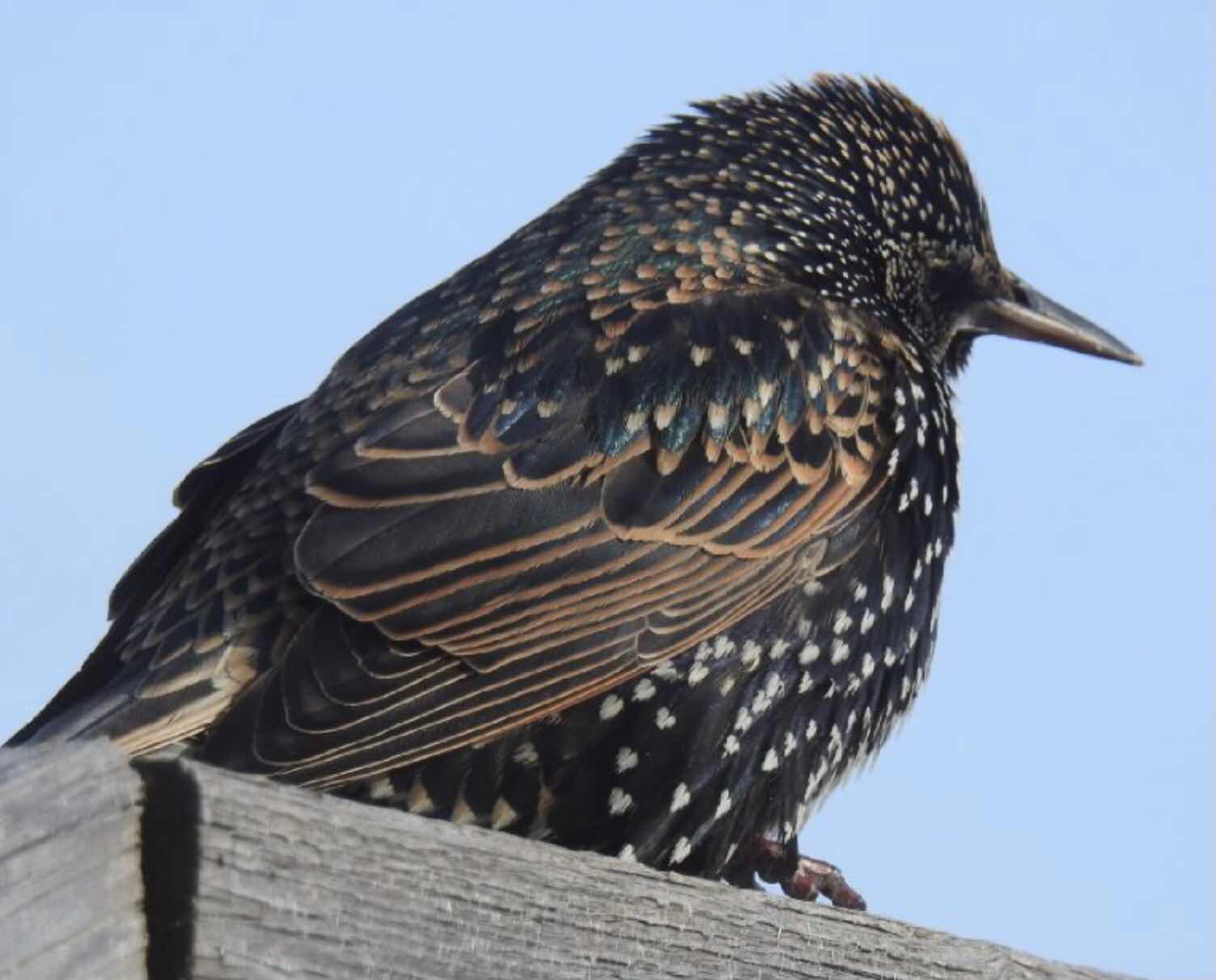 I hope you can see the hearts on the starling’s feathers. They were a surprise to me.

It’s stormy and schools are closed, the second storm day since school opened two weeks ago. We had three mild days last week but it’s too early for spring.

There are currently eight people in hospital with Covid and 13 deaths, all from Omicron. Presently there isn’t anyone in ICU from the virus. There are only 20 ICU beds on the entire island. Thankfully, the measures taken by the province and the co-operation of islanders kept the infection numbers low until this latest Omicron wave. The infection rate looks to be on the decline now.

Since my husband and I had the booster shot, I don’t feel quite as nervous about shopping etc. However, I expect I will be wearing a mask whilst shopping after the mask mandate is dropped finally. We’ll see how it goes.

Just Grand and an update

We stayed home a week after our booster shots, having stocked up on groceries just before that shot. I have issues with my back and haven’t been able to use the treadmill or bike during that time so I was feeling rather down and the weather wasn’t helping. The wind has been relentless and the cold with it precluded any outdoor photography. When the wind took a break, finally, we went to Grand River to see the ducks which gather there every winter. Ducks are among my favourite birds.

We were looking for Goldeneyes, Common and Barrow’s, but were thrilled to see so many American Black Ducks there. Hundreds of them were gathered over areas of open water by the bridges on the Grand River. That day, their nasal quacking sound carried through the air and was music to my ears. This photo, showing the white under their wings is one of my favourites. 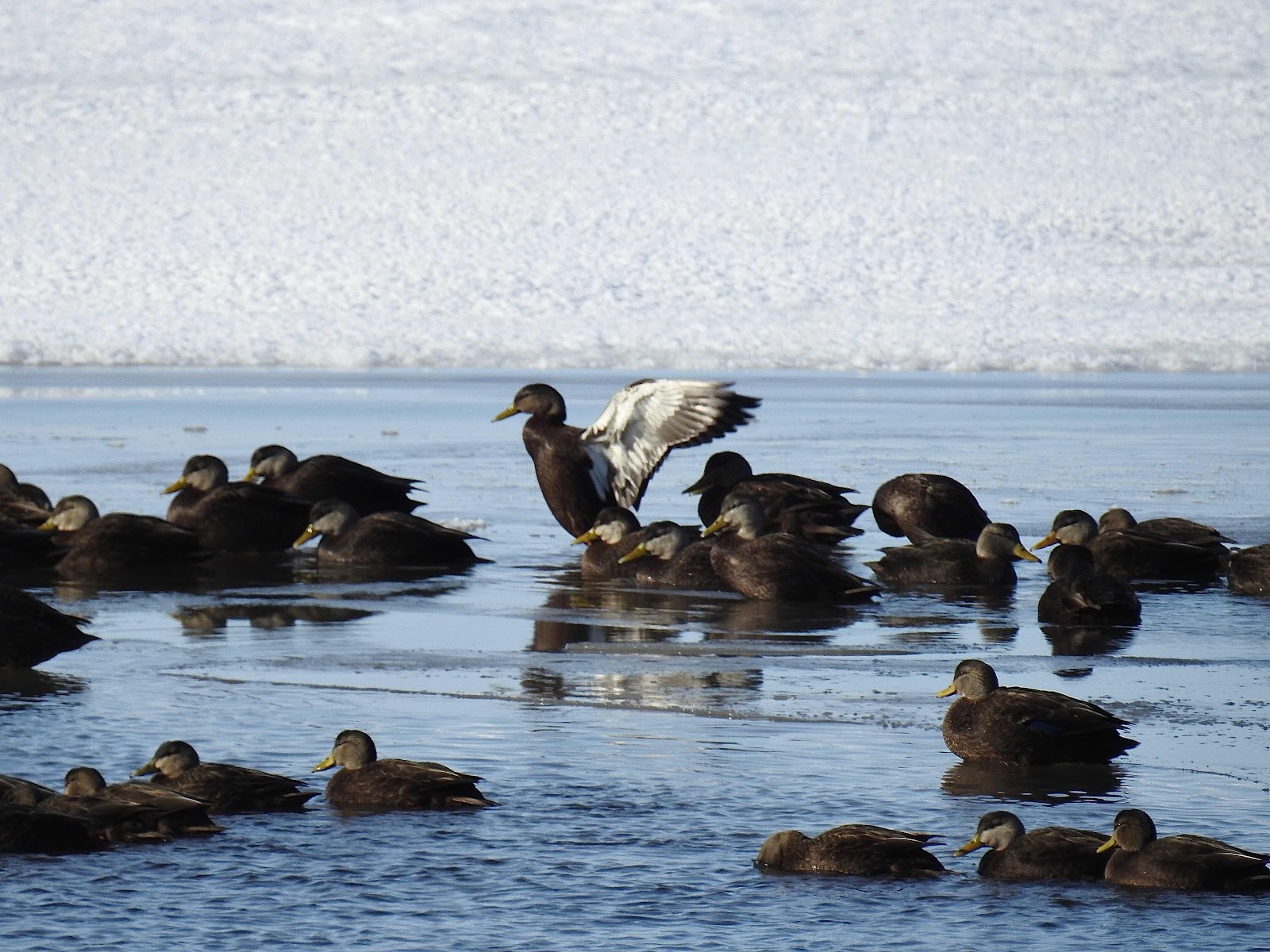 Most of the Goldeneyes there flew off when we stopped the car. However a few hung around with the Black Ducks and this male Common Goldeneye was obvious among its black friends. 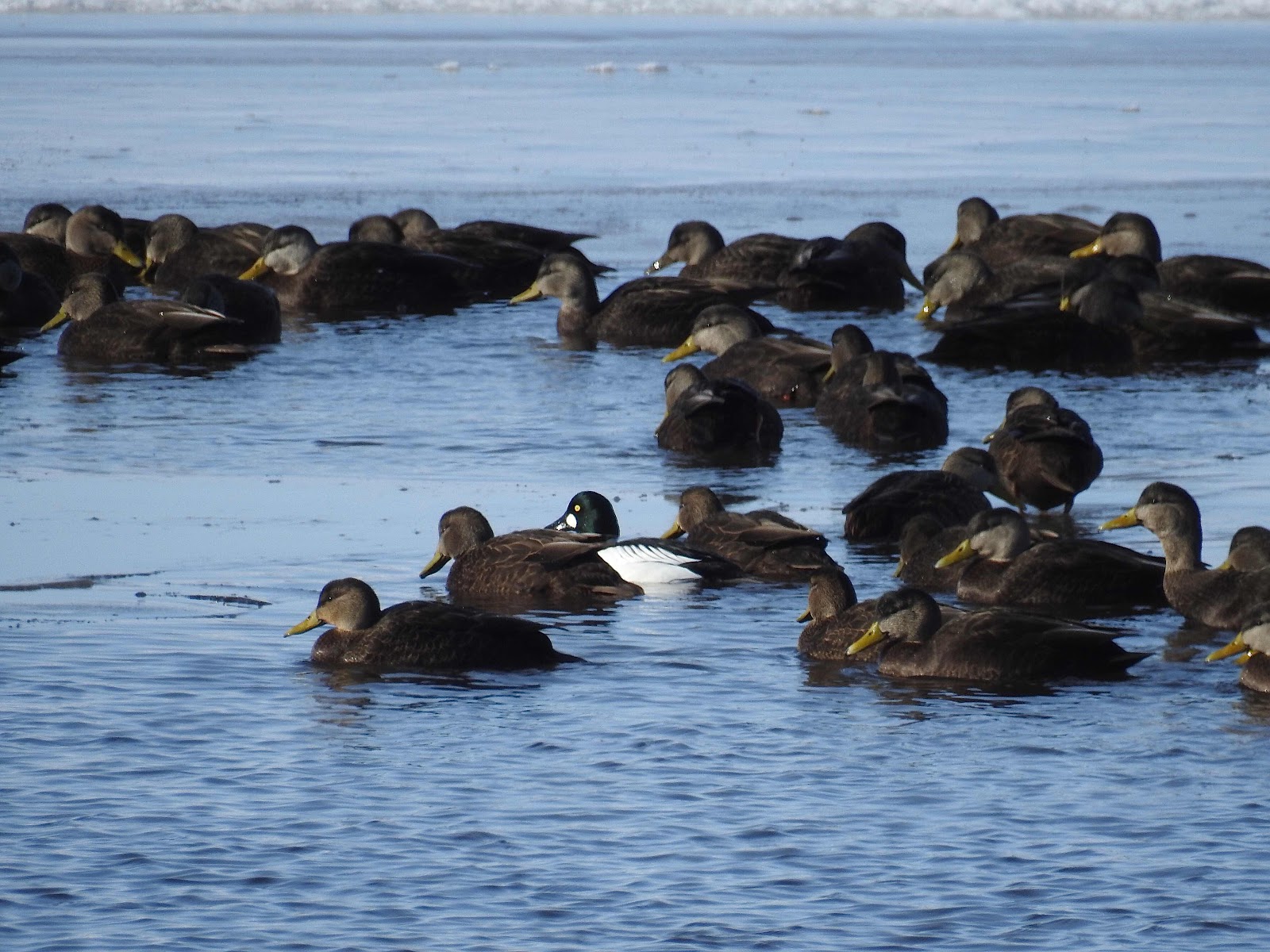 The female Barrow’s Goldeneye with its orange bill is front and centre of this photo. 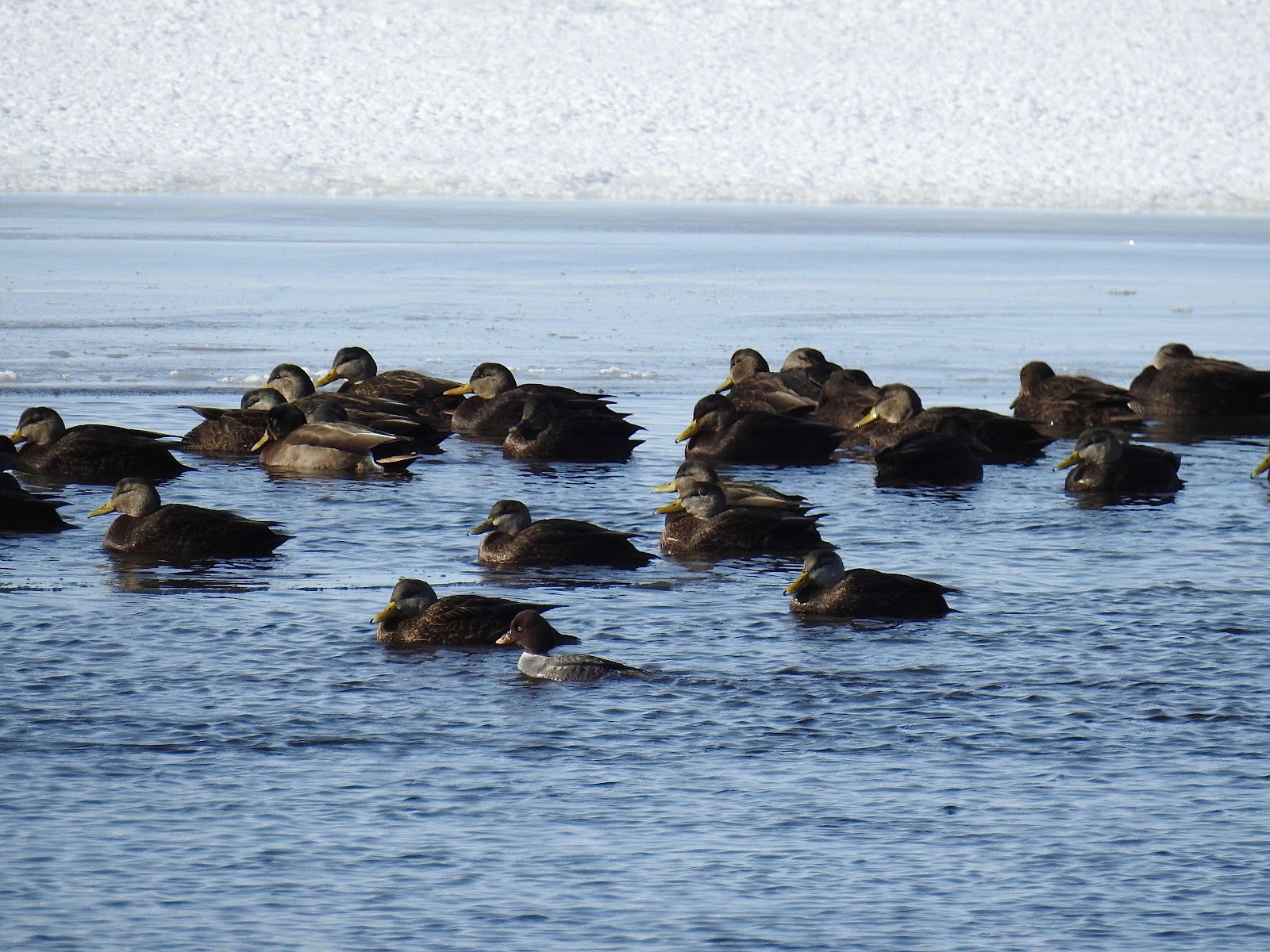 Mallards were absent from the saltwater marsh by the boardwalk this past autumn, so I was thrilled to see them as well. The females are difficult to distinguish from the Black Ducks but one is obvious in the front left of this photo, with the male behind her with his familiar green head. In addition a female Common Merganser with its brown head and grey body was obvious too. 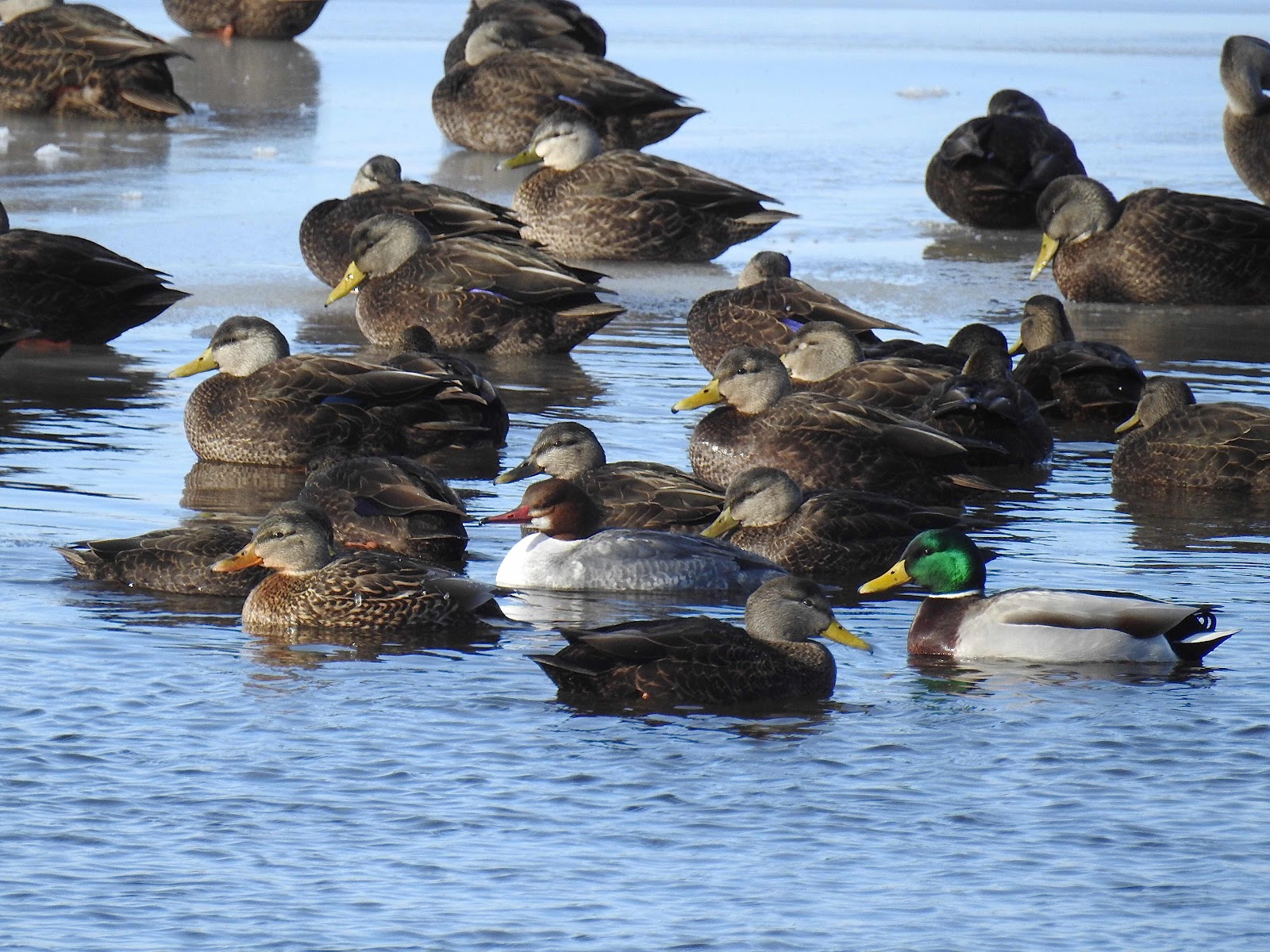 Nearby, domestic geese enjoyed the area too, oblivious to the human stood above them on the road, watching with interest. There are always domestic geese in this area every winter. 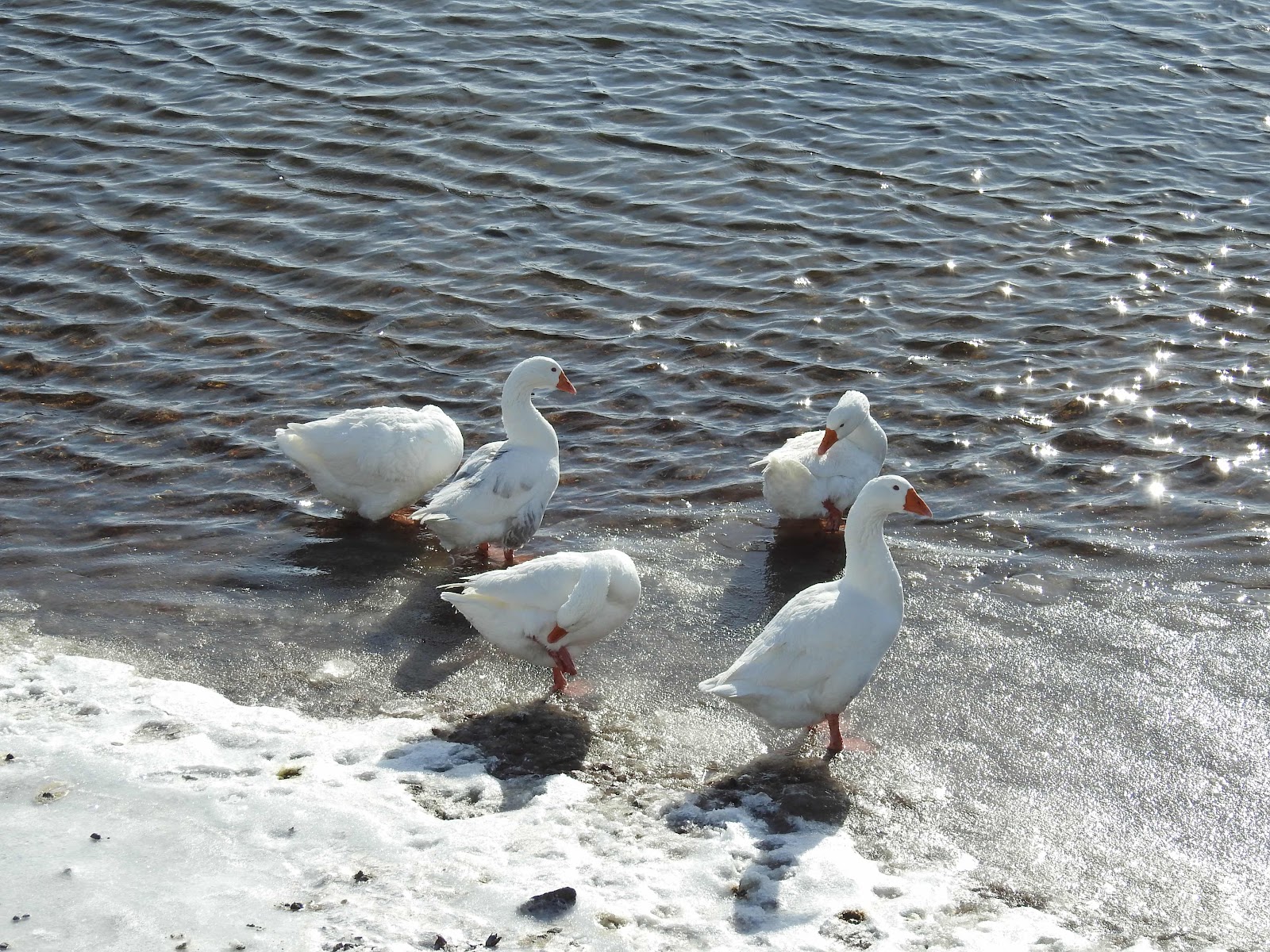 We drove along the river to another area of fast running water where both species of Goldeneyes were plentiful. But that’s another story.

Anyone who follows my blog knows that my husband and I recently took our golden grand-dog, Georgie, to the vet. She is doing well on the medication for arthritis.

On February 3rd, Georgie celebrated her twelfth birthday with her family. Our daughter is convinced the dog knew it was her cake even before the treats were added! 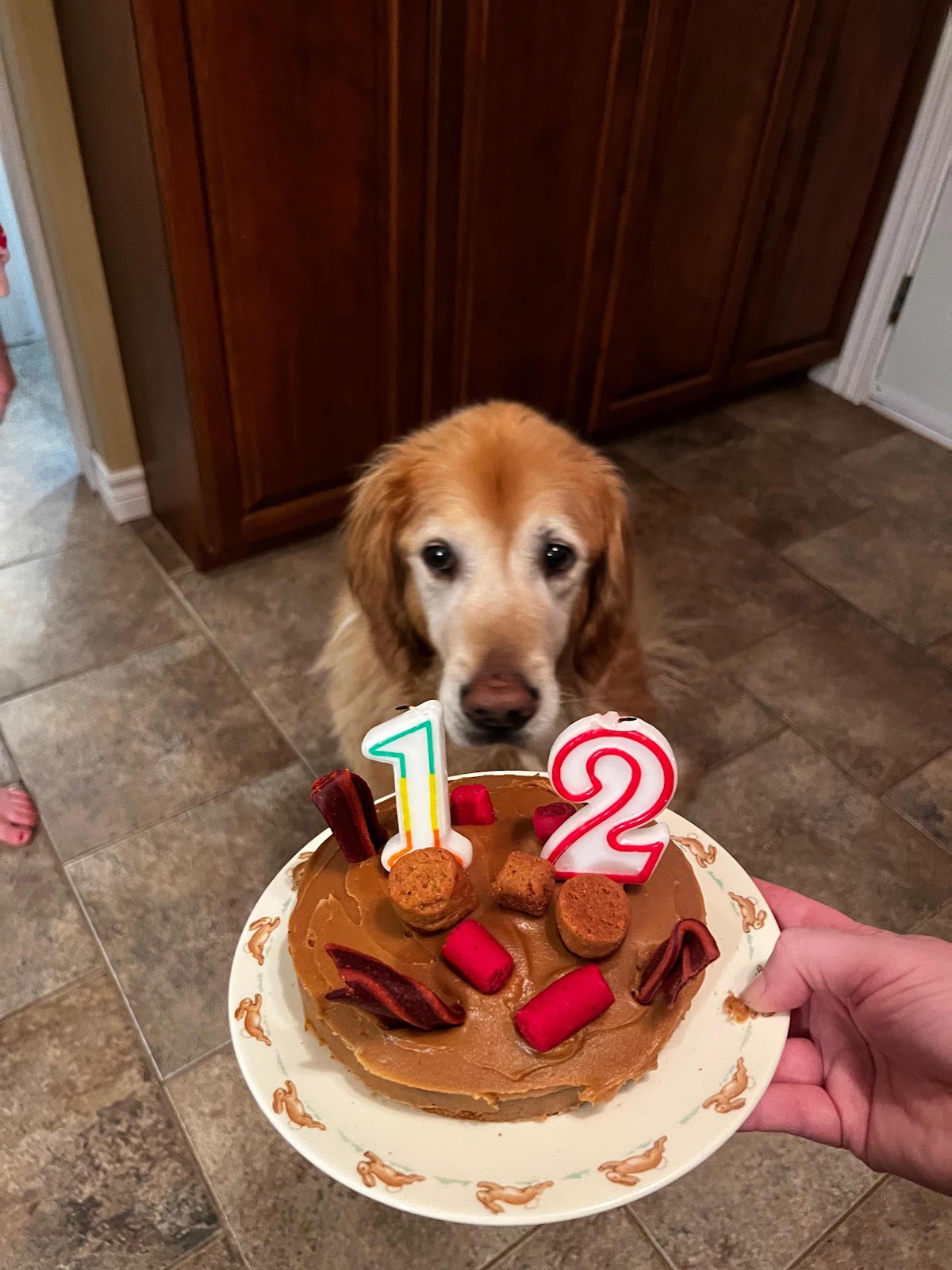 Surprise! She ate the whole thing minus the candles, unlike her eighth birthday when she chowed down on the candle too.

In addition, we have had four weekend snowstorms in five weeks. The most recent dumped a huge amount of snow without the high winds of the previous storms. Needless to say, we are tired of winter.