It’s been bitterly cold, with “feels like” temperatures in the -20s Celsius, so we haven’t done much walking outdoors which is our preferred place to walk. However, one calm day, we ventured to the boardwalk in Summerside to see the usual creatures who make their homes along its length. They did not disappoint.

Male and female Mallards floated along in the stream which has frozen and thawed several times this year already. 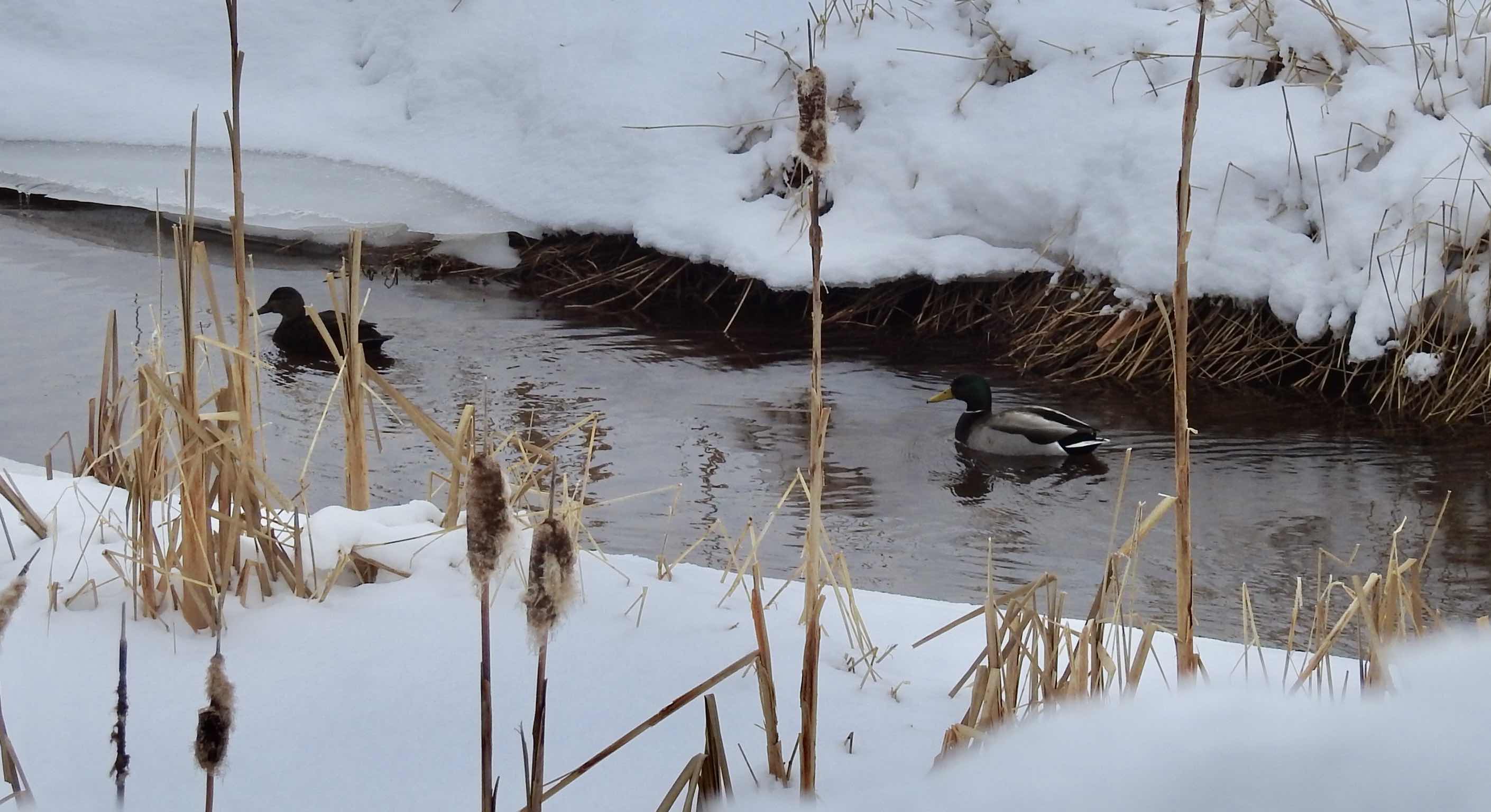 Early last month, what may have been this same two, swam in open water, unimpeded by ice along the margins of the stream. 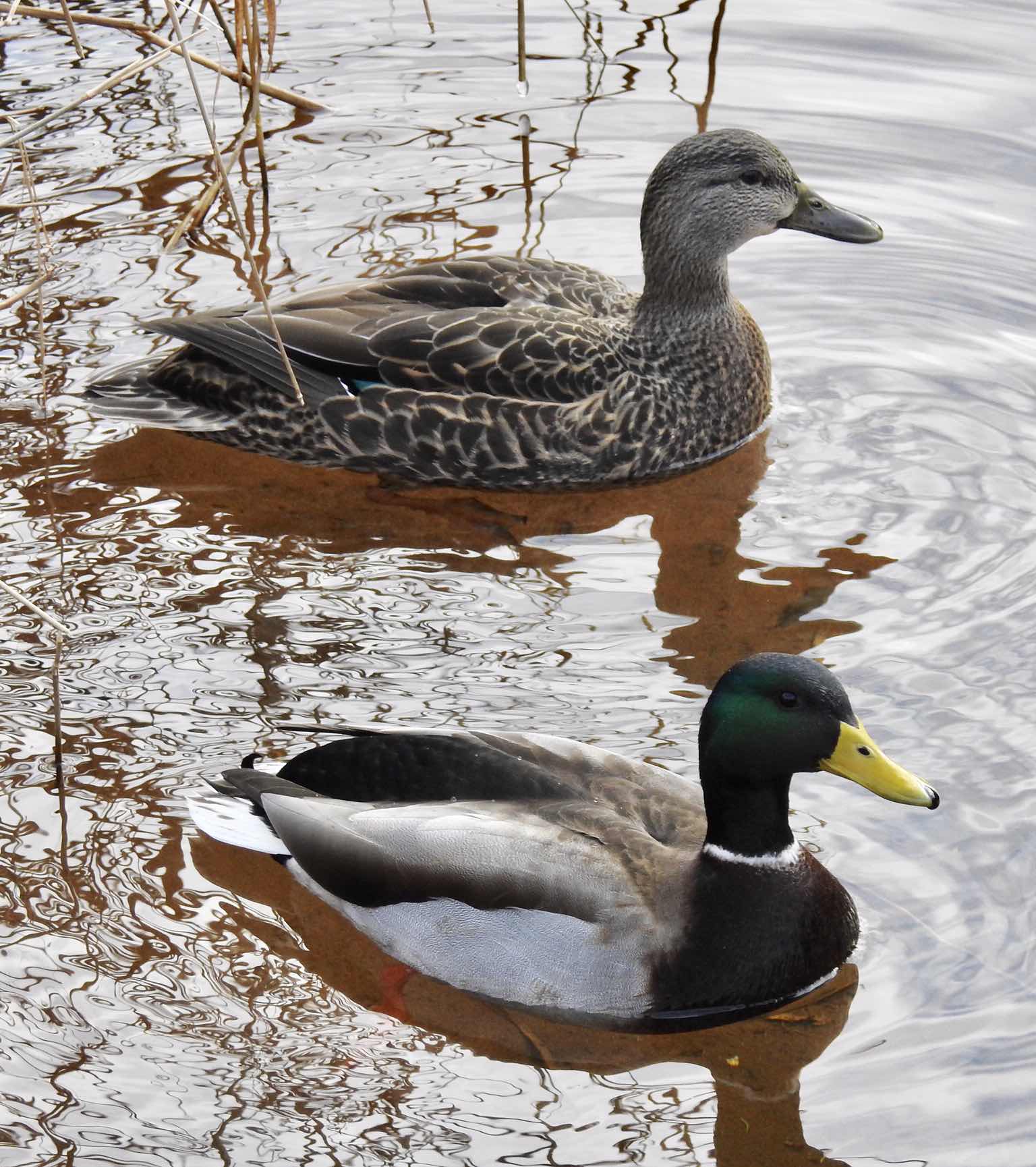 A flock of Blue jays was quite active. I counted fourteen at one time, flying around the bridge where admirers leave peanuts. Try as I may, I was unable to capture any more than one at a time. 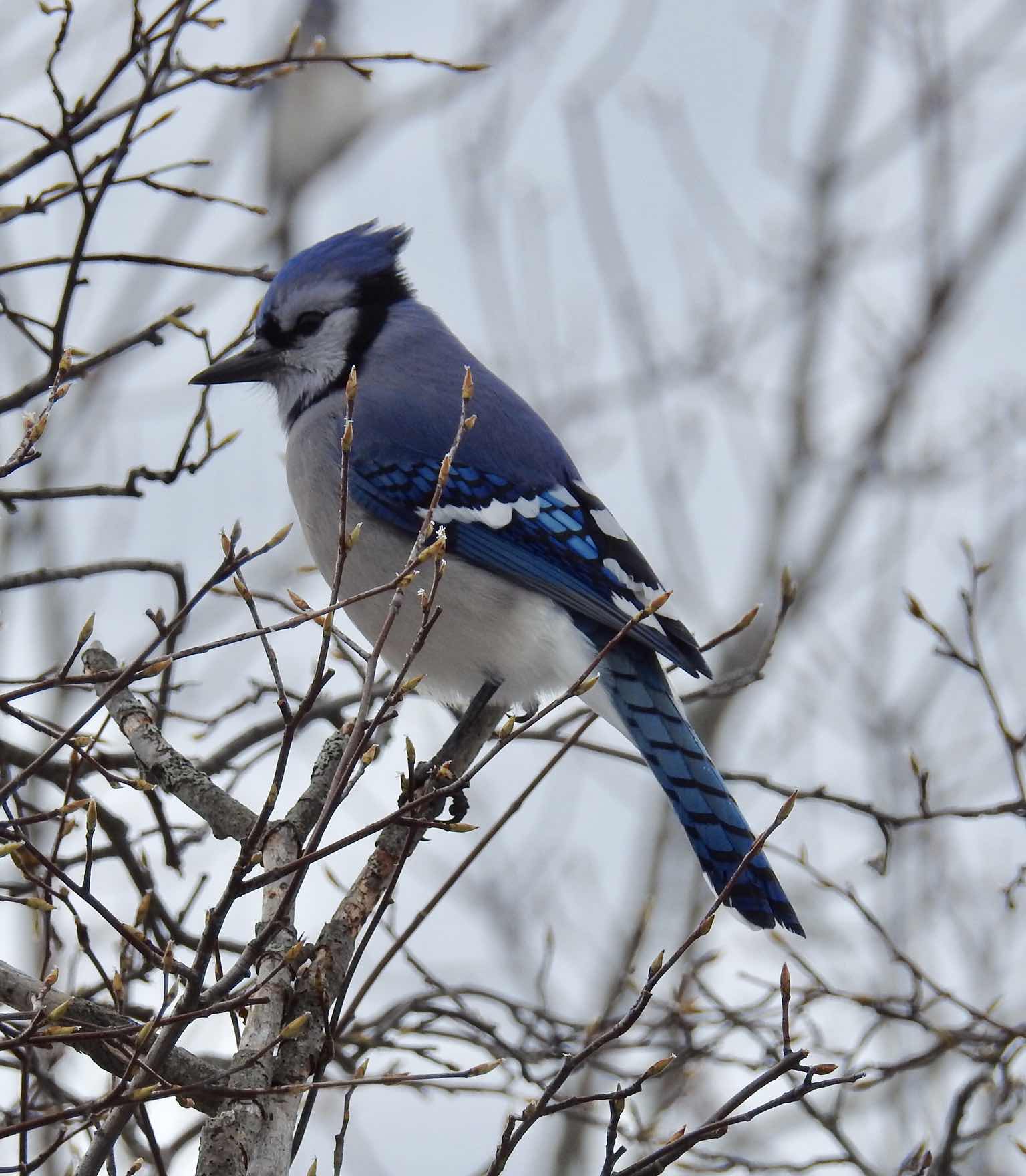 The white abdominal feathers look downy compared to the tail and wing feathers. The blue and white markings on the wings were dabbed on by the Maker’s paint brush. The head crest and the black chin strap added the final touches to their richness.

A Red squirrel appeared to bow after he ate some of the seeds offered by another walker. 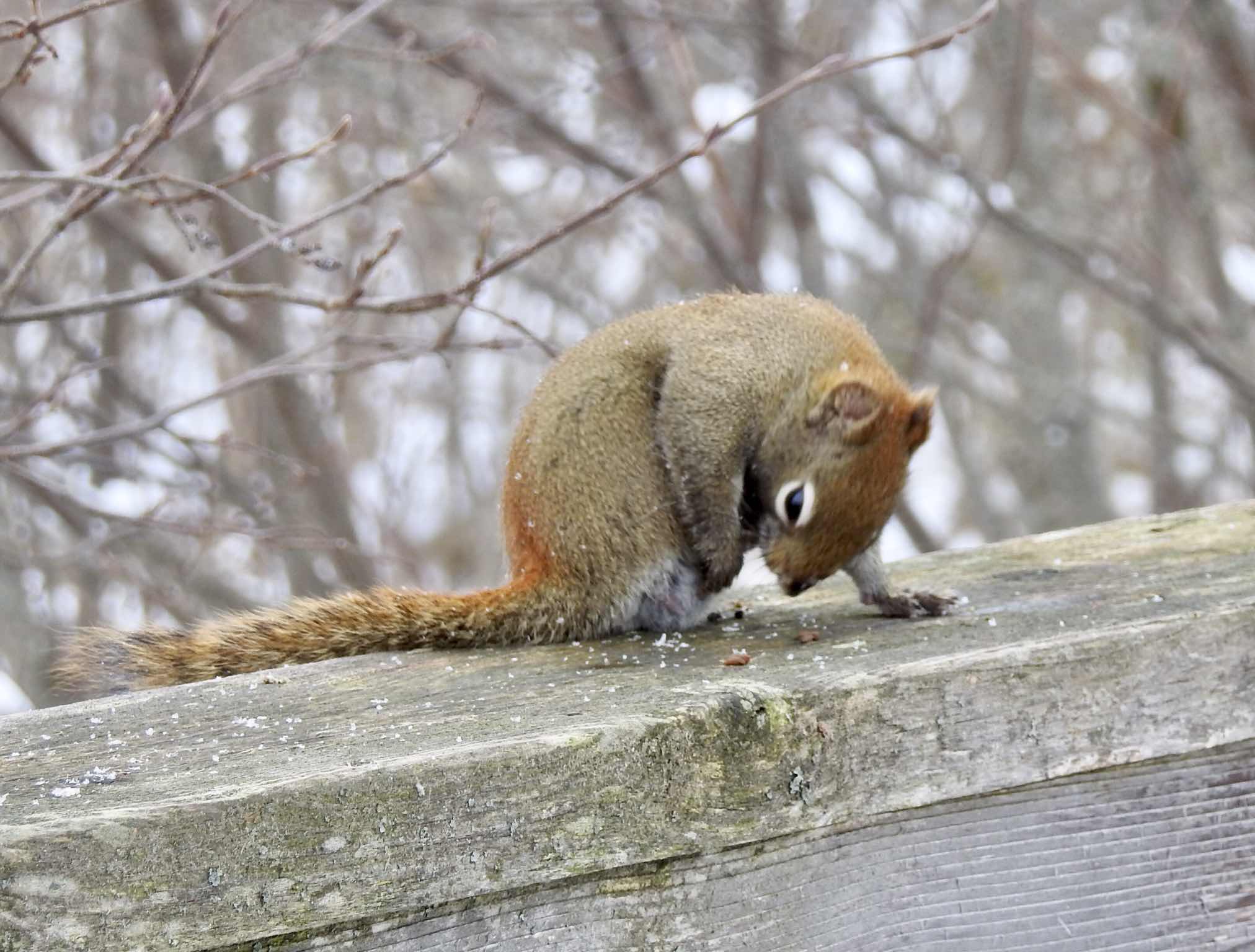 He scurried along the railing, watching, then approaching any new walkers who happened by.

A Mourning dove fluffed its feathers as it sat watching the scene, waiting for the opportunity to feed on the last of the seeds when the more aggressive birds were finished. 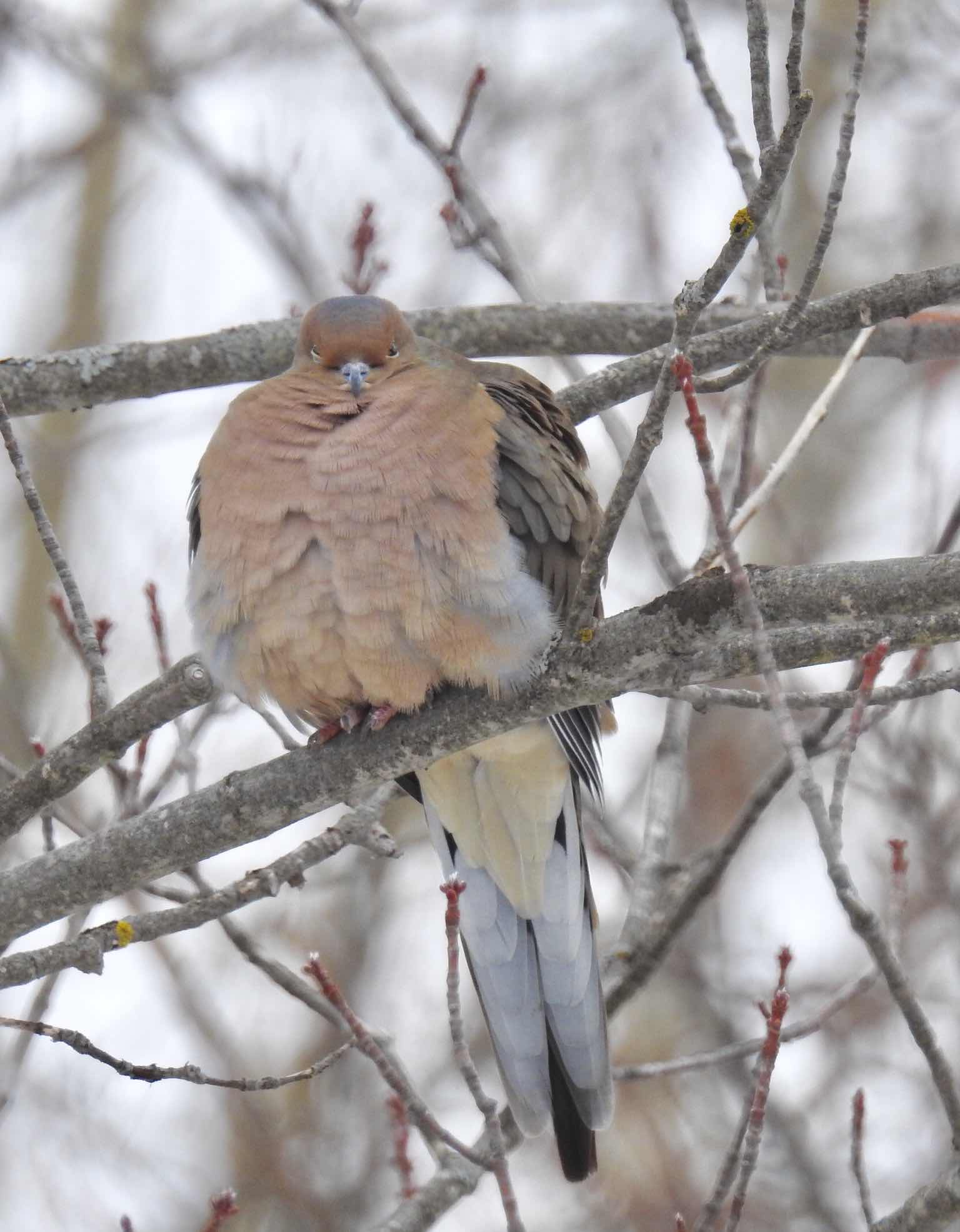 It looked twice it’s size fluffed up on the branch as it kept warm. The soft colours on its underside were pronounced from that position.

And finally, a female Hairy woodpecker made an appearance as we approached the end of the bridge. 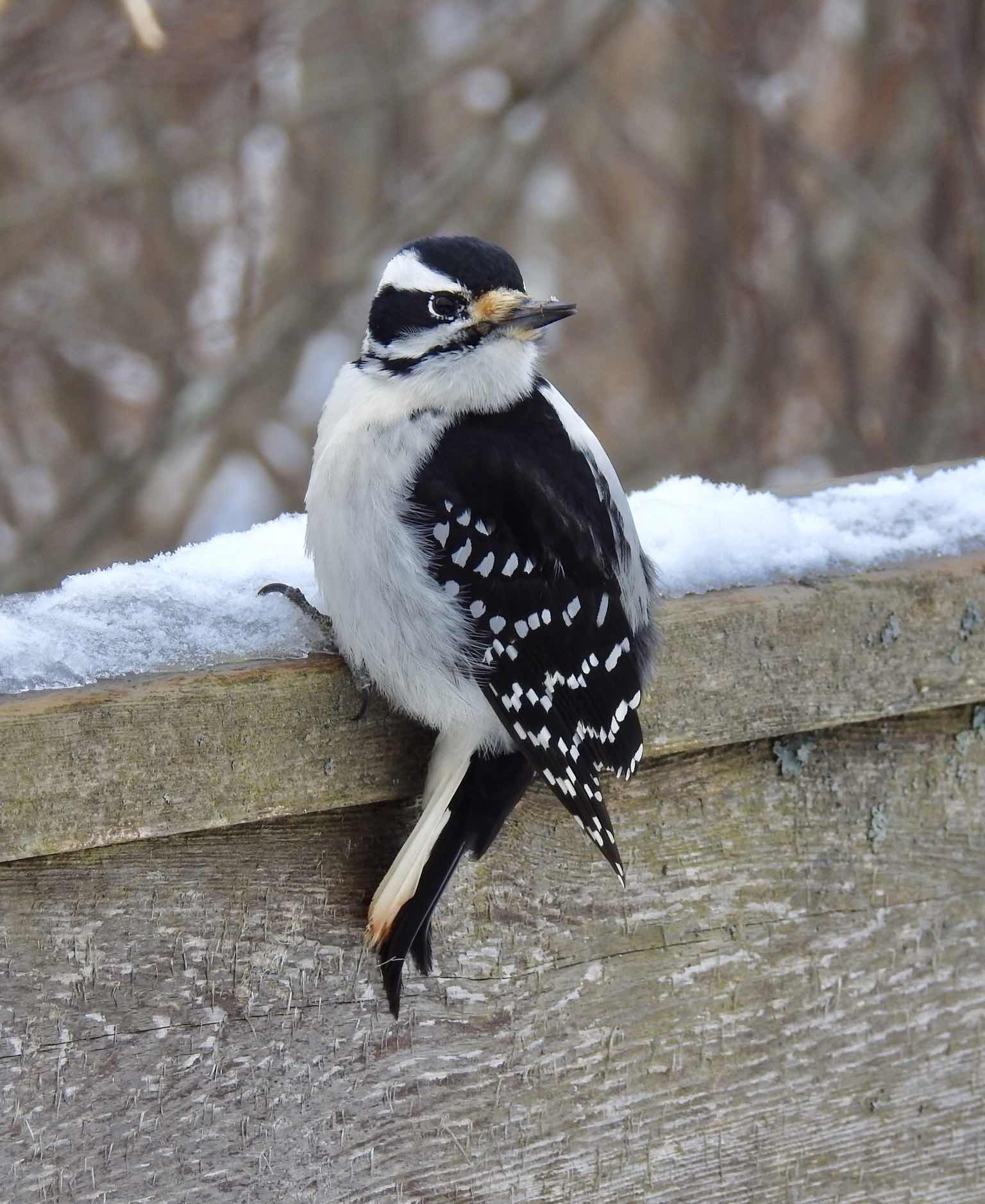 She was looking for peanuts and hopped along the railing and down the sides of the bridge with ease. The spots and bars on her wings made me curious to see the markings whilst she was in flight. She is a sturdy looking creature!

A sparrow approached the bridge as well, but it was too fast for photographs. Some varieties of sparrows stay on the island for the winter though this is the first one I’ve seen.

I always enjoy the time with the animals along the boardwalk and think about them during the bitterly cold weather every winter. They manage to survive and even thrive though with the help of their human friends.

Hello, beautiful captures of the birds. I love the chubby dove. Cute woodie too. Enjoy your day and have a happy weekend.

Your pictures are absolutely stunning, Marie. I especially love the soft color on the dove. But really every pictures was a keeper. :-)

Gosh that really is cold Marie, I just can't imagine how that would be. This weekend it looks like we'll get our first real taste of summer, 37/39C but only for a few days, we've been really lucky so far. Love all your boardwalk captures here but the mourning dove takes the prize, the expression/glare is priceless 😀

Remarkable pics of the wildlife seen on your walk. I love the clarity and detail.
Blessings to you this weekend.

Wow, Mallards are tough birds. Maybe they all are. Hate to show my ignorance but I had to look up -20c, and saw that it was -4f. Hope you have good long underclothes! We have mourning doves here and this is the first time I've seen one all fluffed out. The pictures are so beautiful and so are your words.

Your fluffy dove is my favourite of these.

I miss feeding the birds! We only have sparrows here. There are countless sorts of sparrows, and I've nothing against them except no matter how many feeders I might put out, they still would fight about them.

Oh Marie, magnificient photos. I especially like the puffy mourning dove.
Brr...I certainly have nothing to complain about weather wise compared to you.
the gray and murky days just get to me at times.
Hope your week goes well.

Whau these are super cute birds! I wonder how you managed to get close enough to the Mallards. It has been plenty cold in here as well. We go to the gym in a school nearby in order to get some exercise. They have a great fitness room with modern equipment and this is wonderful since we are not good outdoors walkers unless is Spring or early Summer. Beautiful photos and wishing you a lovely weekend!!

Fantastic close-ups of the birds. The fluffy dove looks all wrapped up and warm.
Happy weekend to you!

Oh my. Oh my, oh my, oh my. These are glorious images. At the moment we and our birds are facing the opposite challenge - extreme heat. And they cope with it with a great deal more grace and dignity than I can manage. I hope that on both sides of the world they can continue to survive and thrive.

So many lovely creatures letting get closer. All my birds fly far away when they see me.

It's wonderful to see you here without a struggle. Equally happy are the bird and squirrel photos. Delightful. If I didn't say it before, I'm so please you solved your access problems.

Beautiful photos with the subtle colors. Nice and close too. Andrea

So you're a bird watcher, too! I love it for you, Marie, because you seem to have access to so many beautiful nature spots near YOU. Very inspiring.

You are a great observer of nature in this target-rich environment.

It's -20 here today without the windchill. Brrr.

it is nice you were able to get out for a walk, your temperatures are so cold. it is suppose to be 55 tomorrow morning and 7 degrees tomorrow night in to monday - it's wild here!!!

you saw some great birds and captured some awesome pictures. i really enjoyed your description of the blue jay and that a beautiful picture....one nice thing about leafless trees!!!

Absolutely beautiful photos - all of them - but especially the Blue Bird. I felt like I could reach out and touch him.

Fabulous photographs … a joy to see.

I love the fluffy doves too, Eileen.

Those soft colours on the underside of the dove aren’t often seen, Jan.

I don’t think I could function well in those high temperatures, Grace.

I love that area for a walk, Laurel.

Thank you Celia. We see them fluffing to stay warm all the time.

It’s been up and down this weekend with temperatures, William. Weird.

I envy you the variety of sparrows, Joanne. Song sparrows are most common here.

Photowannabe, thank you for dropping by. I would enjoy your winter weather for a time I think.

It is great to get some exercise at a local school like you do. It is great the community can benefit from the facility.

I love the doves fluffed up. They look so cozy, Bill.

There are extremes for the creatures and humans on opposite sides of the planet these day, EC.

The animals here are familiar with the residents in the area and depend on them, Tabor.

Thank you, Mage. I am glad to be back.

I’ve come to enjoy photography and birds are a big part of it, Ginnie.

The cold has been bone chilling, AC.

The trees this time of year certainly help with bird photography, Debbie.

I love those gorgeous creatures, Barbara.

Beautiful pictures! The Blue Jay photo is my fave.

All of the shots are excellent but that last one, love the black and white. Simple but stunning.

Dear Marie this marvelous post filled my day with absolute peace and joy !

THANK YOU SOOOOO MUCH for sharing your beautiful walk with us

i truly enjoyed each bit of it!

what a charming series of gorgeous and stunning images i can see here :)

ah God is so kind to create such magnificent beauties to amuse our souls!
details that your camera offer are just on the mark!!!
you are amazing photographer my friend!

this is so unfortunate that inspite of attempts many times i cannot approach to your latest posts which is disappointing :(

hope spring brings more beauty and blessing to your days and surroundings!
hugs!