Artistry of the sea

During our recent visit to the north shore of Prince Edward Island, we noticed a marked difference in the shape of the sea arch at Mackenzies Brook over the last three months. The shoreline in the area, fortified with rock armour revetments last summer due to the amount of erosion in the area, hasn’t any nullifying effect on the erosion by the arch. 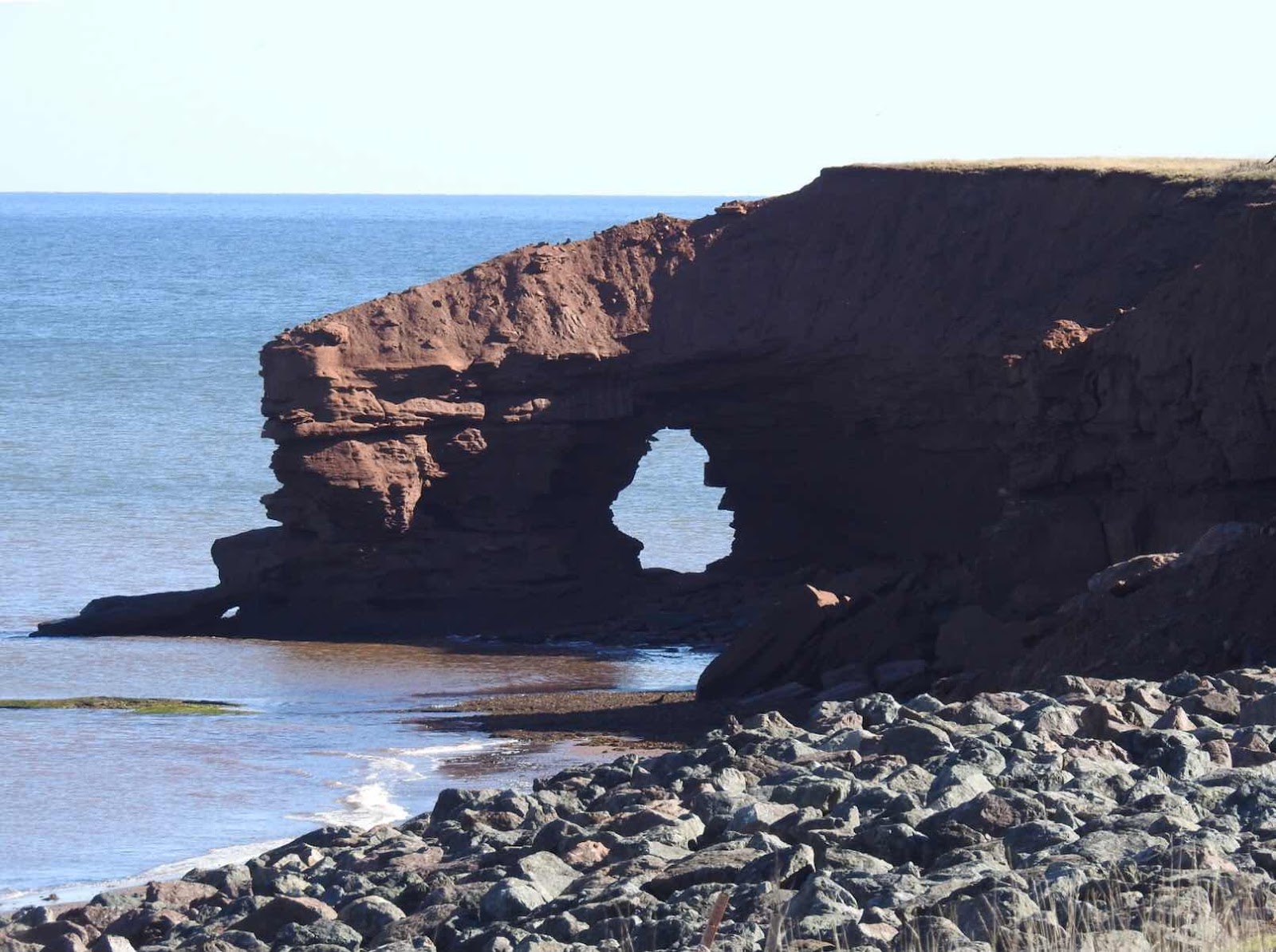 Consequently, the open water in January, due to the lack of ice in the Gulf of St. Lawrence, had widened the arch forming nearby. 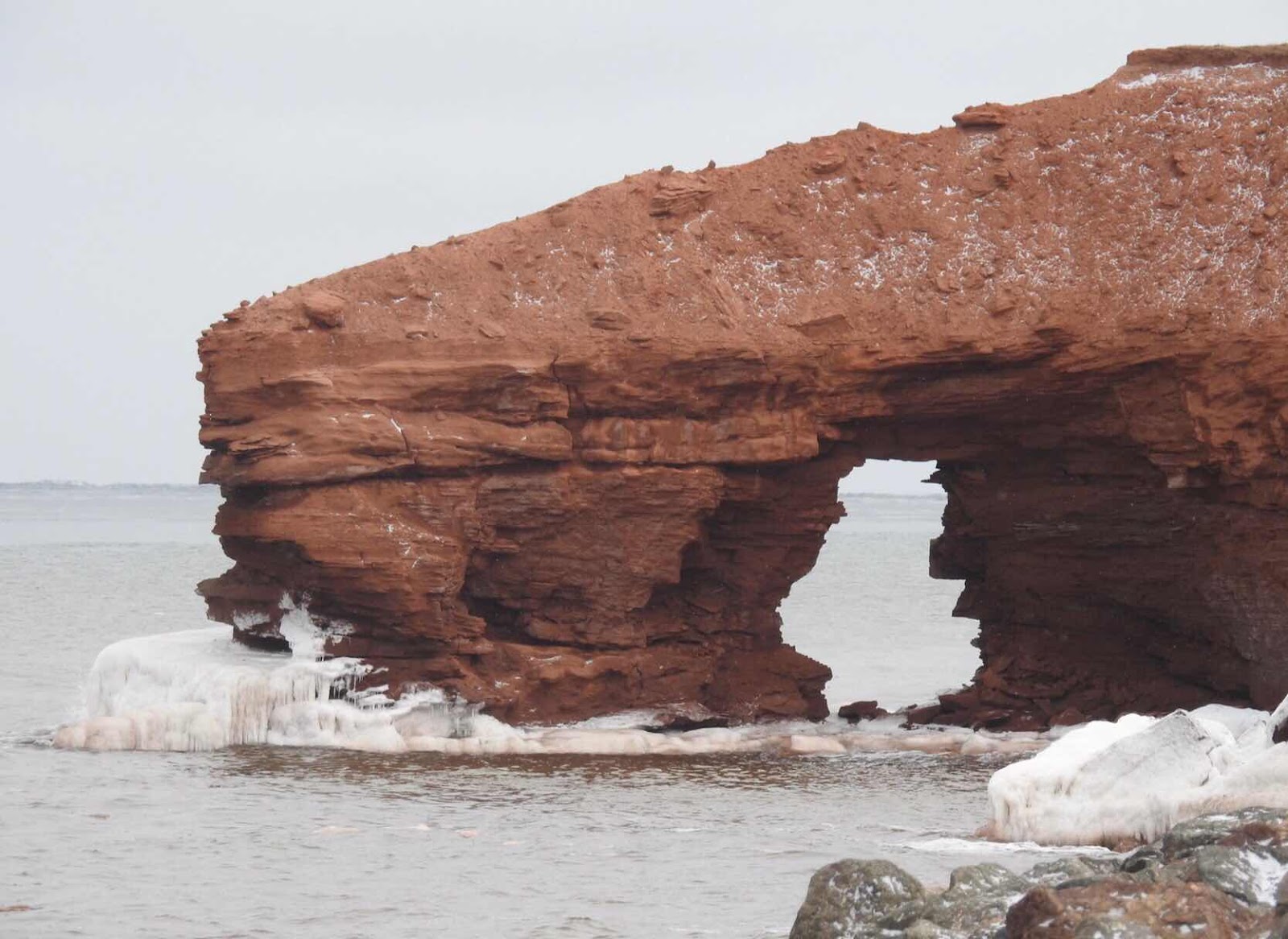 The sea is a sculptor of the earth. The arches and sea stacks which temporarily line the shore last for years and are testament to the artist’s ability to carve the sandstone with her enveloping hands. The softness of the medium and the continuous work of the sculptor create an evolving work of art, unequaled by human hands. What was called the Elephant Rock at North Cape 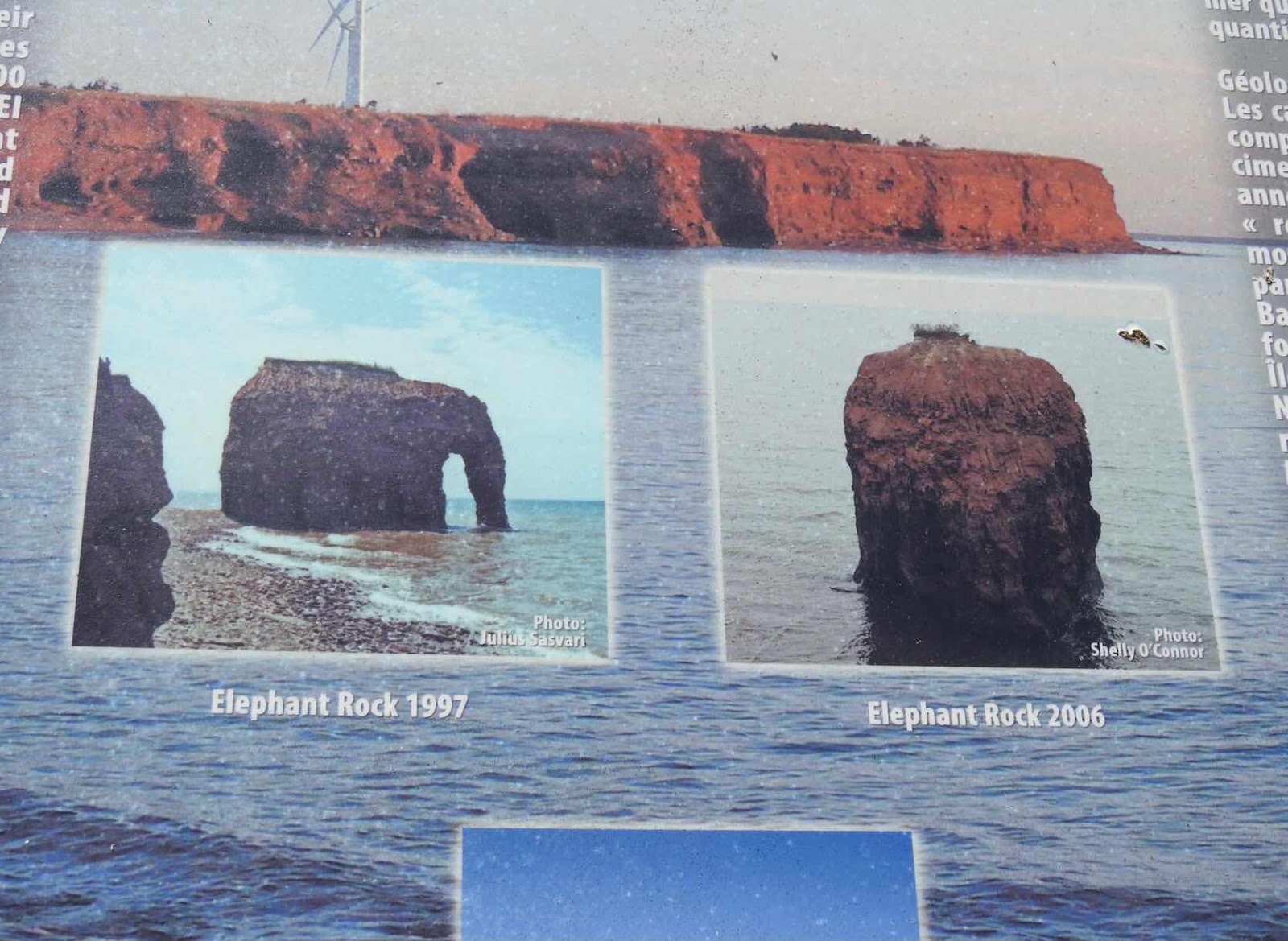 in the 1990s has evolved to the piece we see today. 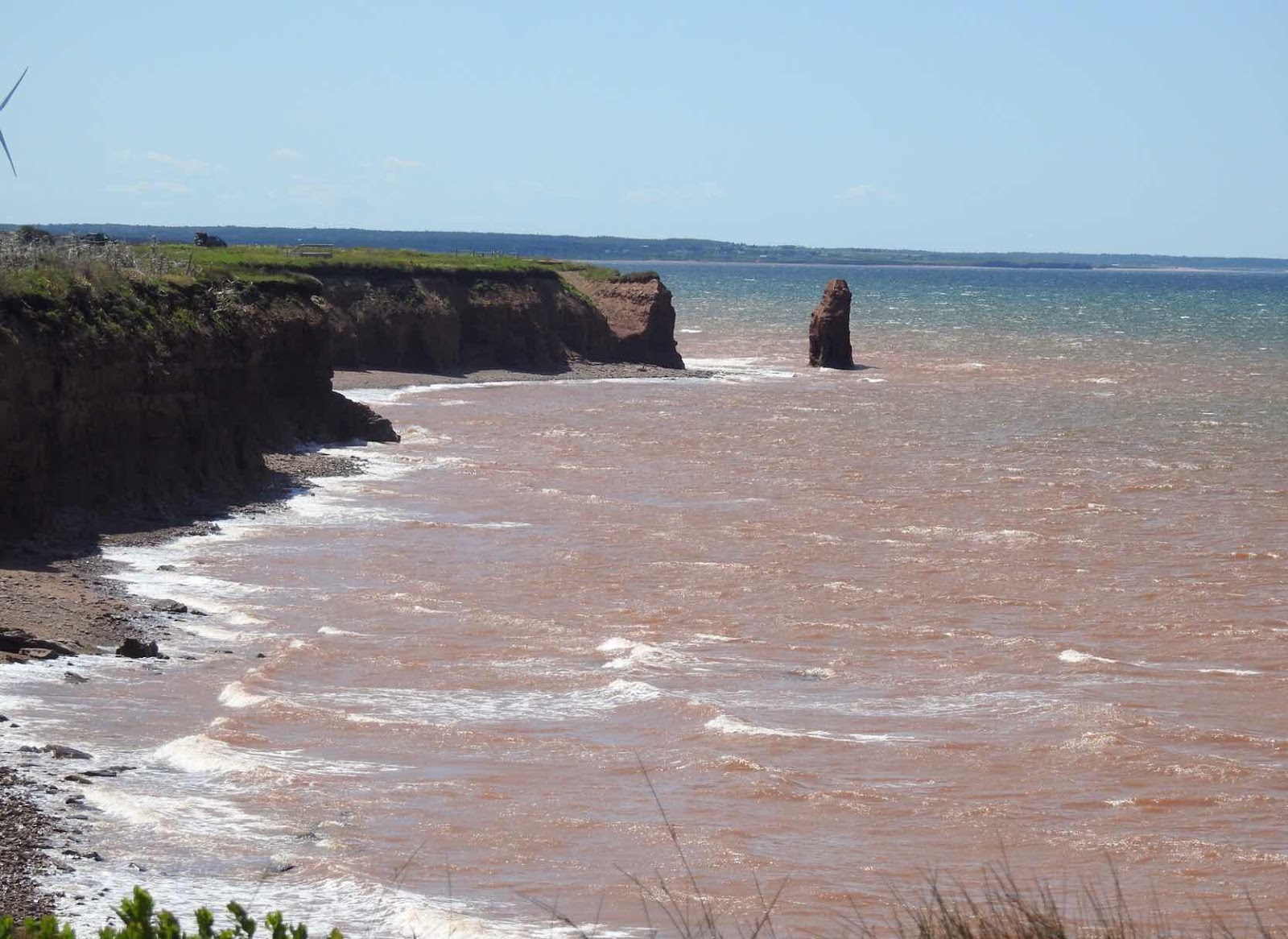 Meanwhile, we walk in this gallery every year to take in the strong picturesque beauty, 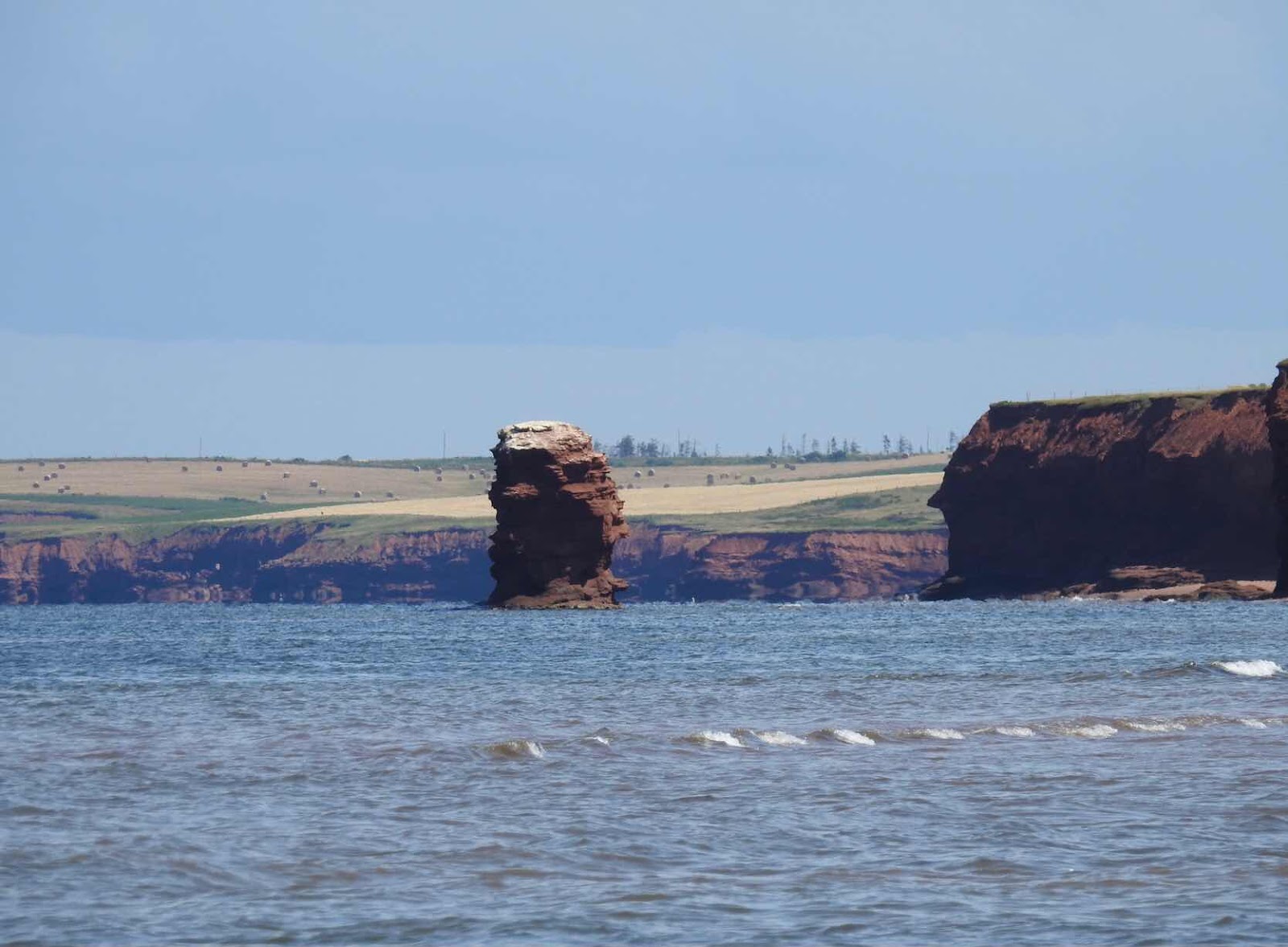 the blocky and earthy design, 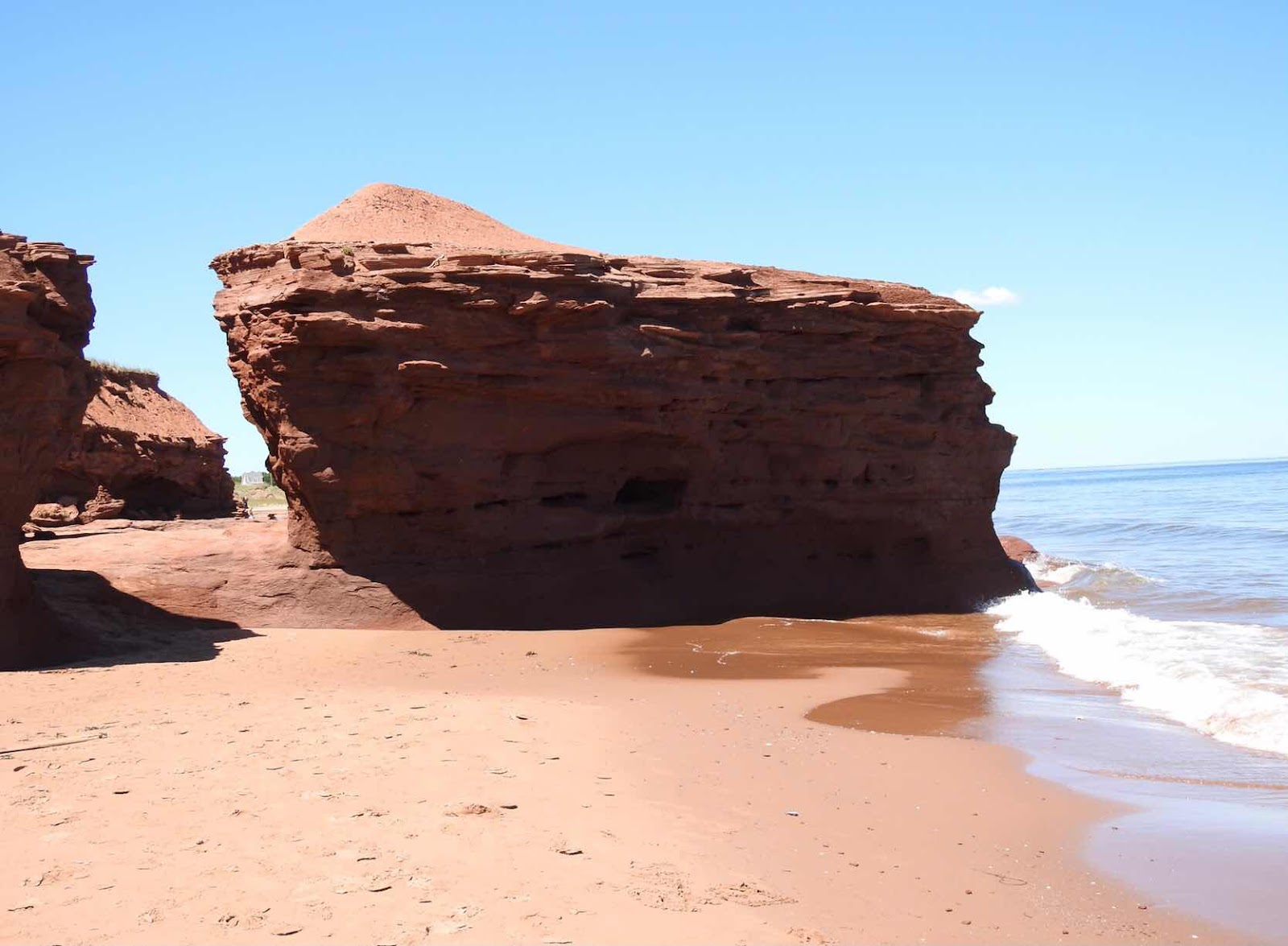 and the commonplace turned monumental, such as this naturalistic tea cup. 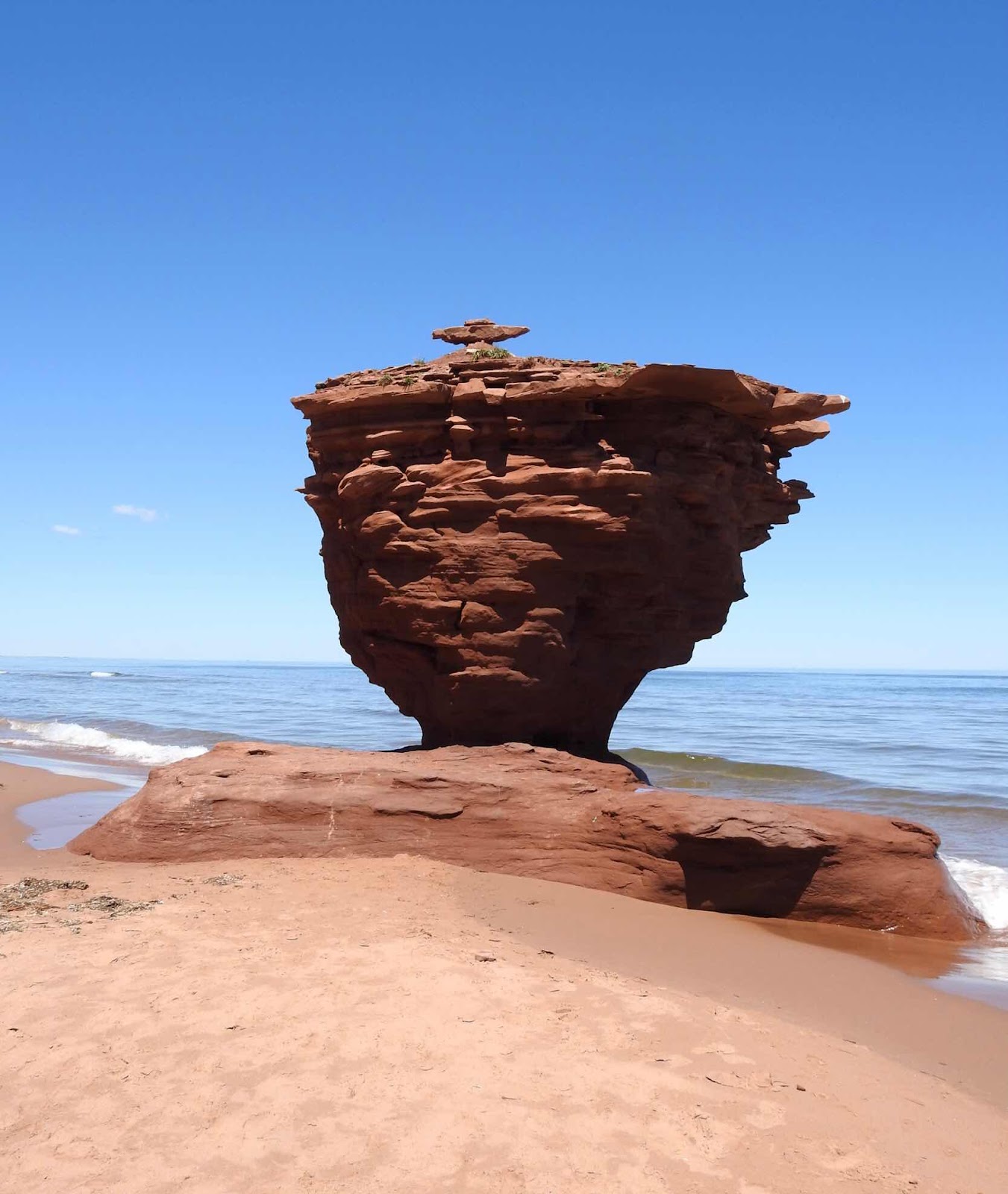 This sculptor works along the coastline all over the earth. She is such a prolific artist and is increasing production at an astonishing rate. While I appreciate the aesthetics, as time goes on, I fear it too.

It seems to be a rapid erosion, but sandstone is so soft and as you say, the sculptor is always working on her craft. :-)

Beautiful and yet so fragile.

I have been to Hopewell Rocks but hadn't realized that PEI would have similar structures. Of course, it makes sense.

What a wonderful take on the rock changes and the perception of the sea as artist. Great gallery of shots.

Do you exhibit your work?

Wow Marie, these are really amazing!

And beautiful Art, she makes!!!!

Lovely to keep/have pictures of different places, over the years.

Kind of sad to see that, so much of the elephant has disappeared though... -sigh-

And thank you, for saying, that the Sea is the sculpture. -smile-

That is a huge change! It is beautiful to see the shapes change due to erosion, but it is a little scary to think about how far it might go. I love the tea cup! I've never been to a beach with rocks, so I love seeing your photos.

We were talking along similar lines when we walked on the beach today. Far less dramatic than your landscape but constantly changing nevertheless. Most recently the remnants of the glacial scree have appeared.

Such a beautiful and changing landscape. Nature is not static, but ever evolving.

wow such beautiful land you live in!the photoes are amazing!It was just like something from the artic

Yes nature are changing but so is life.Nice you have great photoes from it

Wish you some good days !

It's interesting to watch the sculpture take place. Let nature take it's course. When man is involved it becomes a problem.

Truly gorgeous in all of its evolving..
Thanks for showing us how the sandstone changes.
You have such a lovely way of describing and explaining what you observe.
Sue

Beautiful but, as you say, scary as well.

Water is amazing with a touch of wind what it is capable of. It was so interesting visiting Gaelyn of https://geogypsytraveler.com/ a few years back when she was working at the Grand Canyon. She explained so much to us about erosion which we never see here. She is now working at Bryce during the summer months which is equally as interesting. You might enjoy her blog if you haven't seen it before.
Keep well Diane

Amazing! It is interesting to see how the erosion takes place.

We have similar rock works here also. They were once developed into a park with walks and picnic areas. During WWII, all this was dynamited at the start of the war. All we have now are a few spikes.

On Flowerpot Island they bricked up the two flowerpots way back in the 1930s. They did it quite effectively with stone so it's not too obvious but Georgian Bay isn't the Gulf of St. lawrence!

The change is ceaseless and inevitable, and happening to far more than PEI.

What a force of nature!
I agree to your friend Joanne....the change is ceaseless and inevitable.

I so love that last picture..

Seemingly very calm on your visits.

ooooh it is so pretty, the colors and the sculptures. always sad to witness erosion, but it is interesting to witness it in the pictures you have recorded!!

the teacup is quite distinct and very cool!!

WOW! What a comparison of Elephant Rock. I always assumed the erosion took longer; but it does make sense that some substances erode quicker than others. Awesome pictures. Finally getting back to some blog walking, and making my way through my blog log. Hope you're doing well and have stayed Covid free and hope you're getting vaccinated, or perhaps you're already done with the process.

Living close to the ocean and coastline I relate to your post so well today Marie, when I stand and observe the coming and going of that powerful sculptor, it is rather daunting at times 🌊

The sea is so incredibly powerful, and is a talented (although harsh) sculptor.

Thank you for doing this, Marie. I suspect that it provides a graphic illustration of climate change happening right before our eyes. When COVID finally permits us to travel Miriam and I have plans to visit PEI and I will be sure to check these areas.

REally amazing rocks! We have similar sandstone formations here in Saudi Arabia, but they are in the desert. We actually have a huge one also called Elephant Rock!


I translated the comment of Juvenal Nunes via computer.

Nature has this rare gift of surprising us with the wonder of its random art, which time can make ephemeral.
Friendship hug.
Juvenal Nunes

Interesting photos. The teacup will be missed as are the other wonderful formations.

Hi Marie. You taught me a new word today. Revetments ...
and it makes so much sense when used as you have, showing the first two photos. I am amazed at how much the opening has widened in one years time

unfortunately, the elephant rock has changed a lot....lovely art work in 1997.

Thank you for sharing beautiful photos of nature art works.

yes the Nature has beauty ,
,power and wisdom to share for those who contemplate indeed

there is message within each move of Nature for us and for Reason for sure ,for physical eyes and for spiritual eyes as well
thank you for splendid post friend!