Many birders have favourite birds, those which they especially enjoy watching and hearing. While I enjoy all birds, I especially like ducks and ones I look forward to seeing every winter are the Goldeneyes.

There are Common and Barrow’s Goldeneyes which we visit in a few locations. Fast moving water keeps the Grand River from freezing in some places and these little ducks found these areas and return every year.

Like so many birds, the males are showier than the females of these species. The Barrow’s male has a white raindrop shape on its face, whereas the Common has a white oval. The feather markings on their backs are different as well. 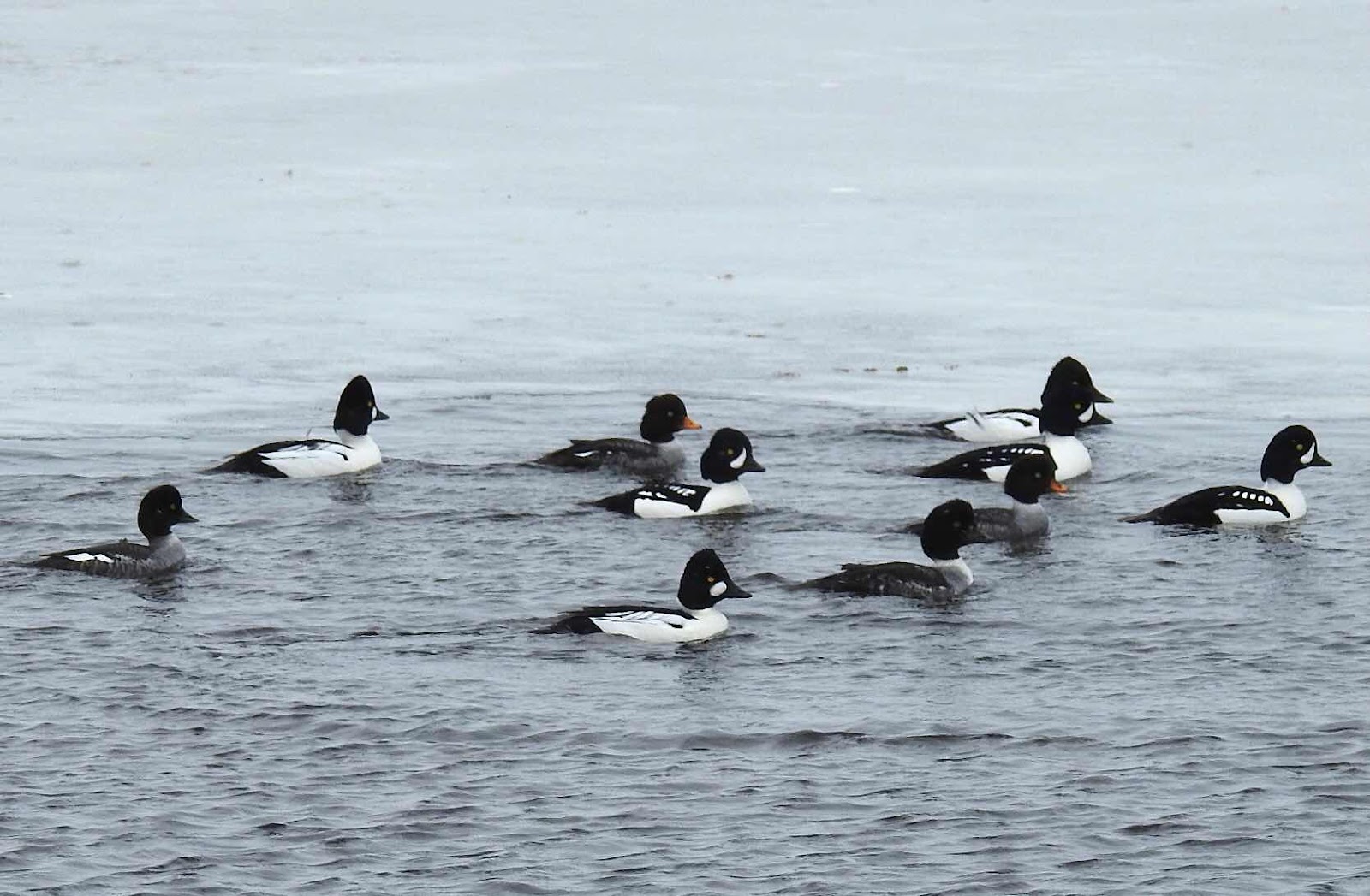 Common Goldeneye, male, in the foreground. Barrow’s male behind it.

The females of both species look alike but the Barrow’s has a shorter orange-yellow beak. 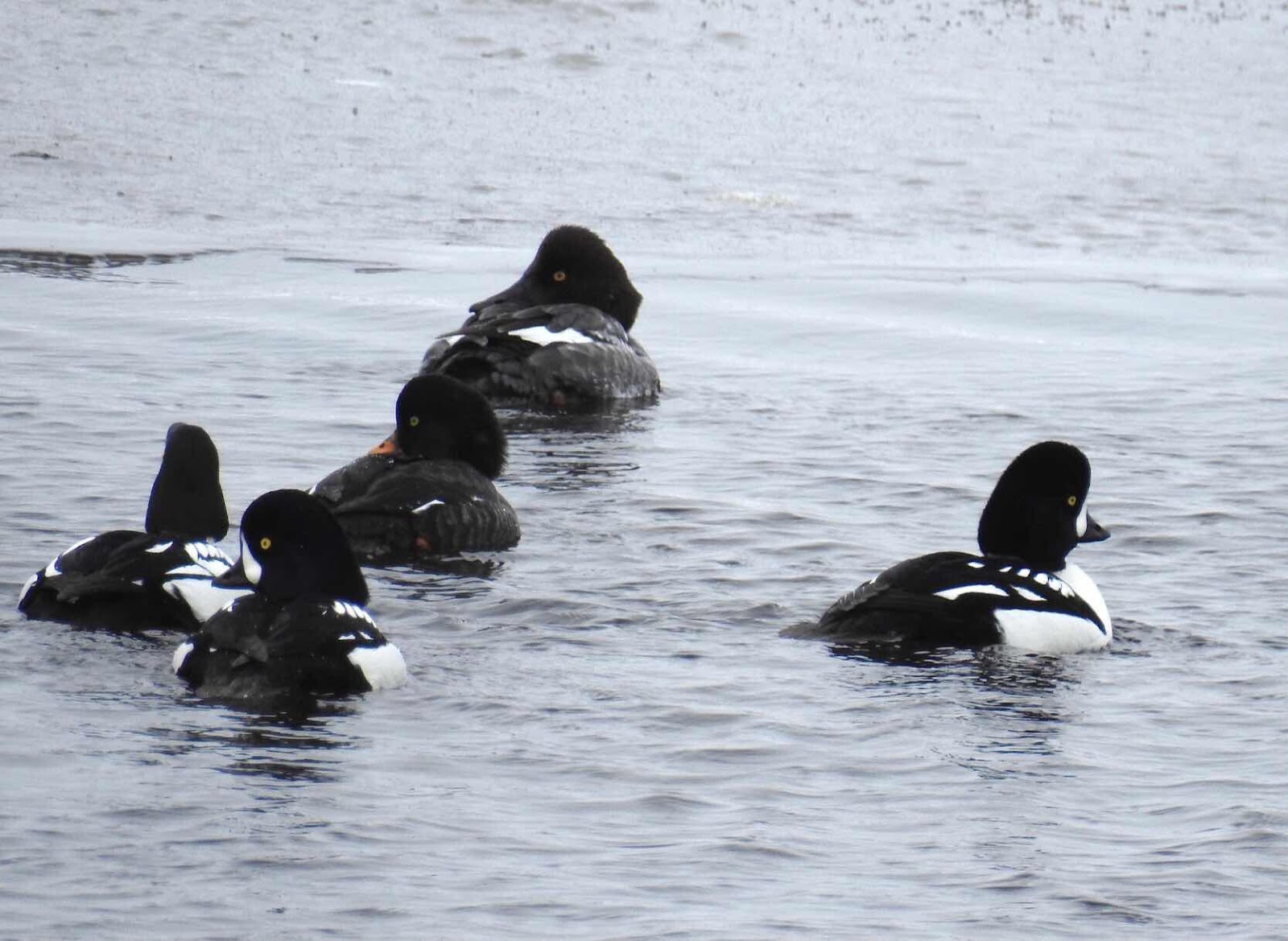 This last photo is one of my favourite photos I’ve ever taken. It was accidental, an aim and shoot, one of hundreds taken one day along the Grand River in Prince Edward Island.

It has five female Goldeneyes, and a male Barrow’s Goldeneye. Of the five, I believe all but one are Barrow’s. One of those looks as if she is quacking vehemently at the male. I wonder what she’s saying? 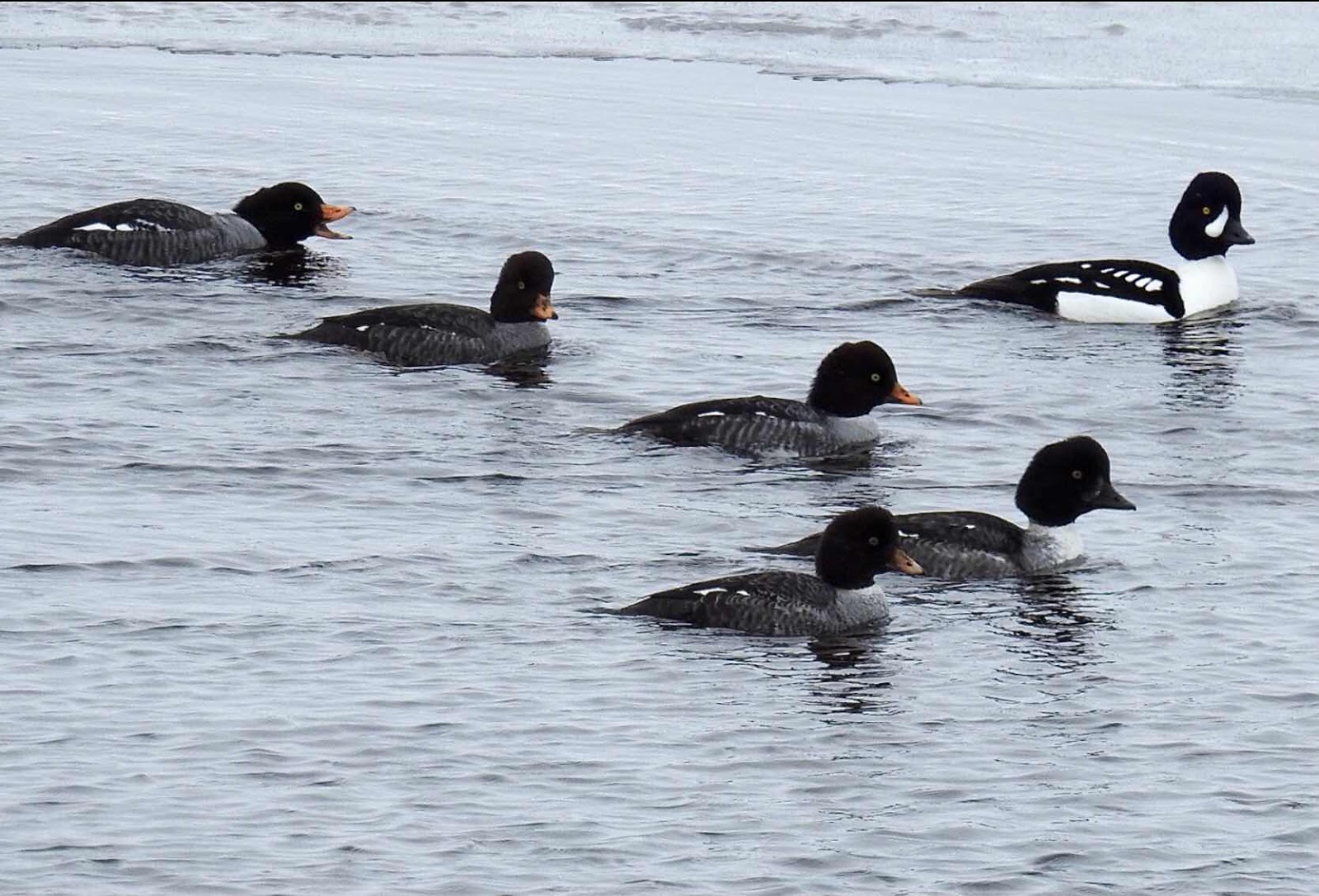 "I told you we should have gone to Cavendish, but do you ever listen? Nooooooo!"

Isn't it strange that one species has a teardrop shape and the other has an oval, yet they are so similar in many other ways. I wonder if that's how they recognise each other. Lovely photos of all these ducks. I'm rather partial to ducks too.
The female is telling the male to stop showing off in front of all the ladies I think.

They are beautiful, I especially like that last one too!

Last shot is a winner indeed. I can think of several captions. Thanks for the info on telling them apart.

Typical back-seat driver I would say.

Th as t last shot makes me laugh...she really looks like she is upset about something.

They have a very distinctive look!

I love Shammie"s answer..perfect.
Delightful ducks. I can see why you enjoy them so much.
Sue

Beautiful, beautiful birds - and I like Shammickite's caption too.

Love Those Golden Eyes - Wait, That's Not How The Song Goes

Love watching the ducks here too. We have pond in a nearby park and we get migrating groups of all kinds "overnighting" there. Right now the geese are flying over honking, They don't usually stop here. I think they are headed for some huge ponds about 50 miles from here. Should take the grandkiddies and go watch.

Ducks are generally so pretty though my favourite birds are the birds of prey. Having said that I get a bit upset when the sparrowhawk visits our garden looking for breakfast! Keep well Diane

I love ducks, especially diving ducks that vanish and reappear yards away.

That duck is probably saying something unsuitable for a family blog.

I learned a lot about Goldeneyes from this post. And yes, that last shot is priceless. I know what that female is saying: "Quack quack!"

Beautiful pictures. I can't wait to see the ducks over here.

That is a great photo, I love it too. The duck is yelling, "and you call yourself a leader and we are lost."

The goldeneyes are tough winter ducks. Any water that stays open permanently is fine with them.

Ducks are so much fun to click, the way their heads disappear under and tails pop up 😊 those quick on the spur of the moment shots like your last shot are quite often the best Marie 💙

"not in my water, you are outnumbered herer"!! awesome captures, i don't think i have ever seen these before!!

What a great sighting. I would love to see these Goldeneyes, in person!
Great series of photos! Take care! Have a great day and a happy weekend!

Hey Big Boy, get rid of these other dames and I'll show you a good time.

I think it is goldeneyes of some sort that I have been seeing in the distance in our river.

I guess we'd have to learn duck-talk to make any sense of what she's saying but to me it could easily be mama Duck saying "get away from my girls !"

If ducks wore clothes I'd be inclined to caption it "How many times do I have to tell you to out your dirty laundry IN the hamper?!?!??"

white spots on the duck's body look so beautiful...
I never saw these kinds of ducks in nature....great shots.

Have a nice weekend.

Great shots and information. All I ever see around here are mallards. They come in a flock almost every day to our yard to gobble up the cracked corn on the ground and seeds from under the bird feeders. She might be saying “ Why don’t you ever listen to me! I told you to slow down.” Have a great weekend.❤️

“Are you woolgathering again? Move faster. We don’t have all day!”

I don't see them here. They are very photogenic...

Your ducks are very pretty. I had to smile to them gathering in the cold water.

Although I love watching birds, I have never really taken the time to learn the names and the various kinds of birds. Now that we are in South Florida, I bought a book on South Florida water birds and am identifying the birds I see.. I saw woodstorks last week. The town I come from in Bucks County is known for its ducks.

if i had such opportunity i too would have love love to observe these gorgeous ducks .

these shots are excellent but accidental one is fantastic ,sometime such photos show better results
i guess she is scolding the male for his quick walk before them lol ,her expressions say so to me :)

I love ducks too and I don't know why. As a child I only saw them when we went to the Zoo where they had a large pond. We could feed them bread and they would come running. It wasn't until I got married and lived in the country in Louisiana that I got to raise ducks. They just put a smile on my face.