They drift silently along the coast, the icy offspring of the North Atlantic, birthed from glaciers. They float past the coast of Labrador and then further south to Newfoundland, our first island home, floating into warmer water in an area known as Iceberg Alley. 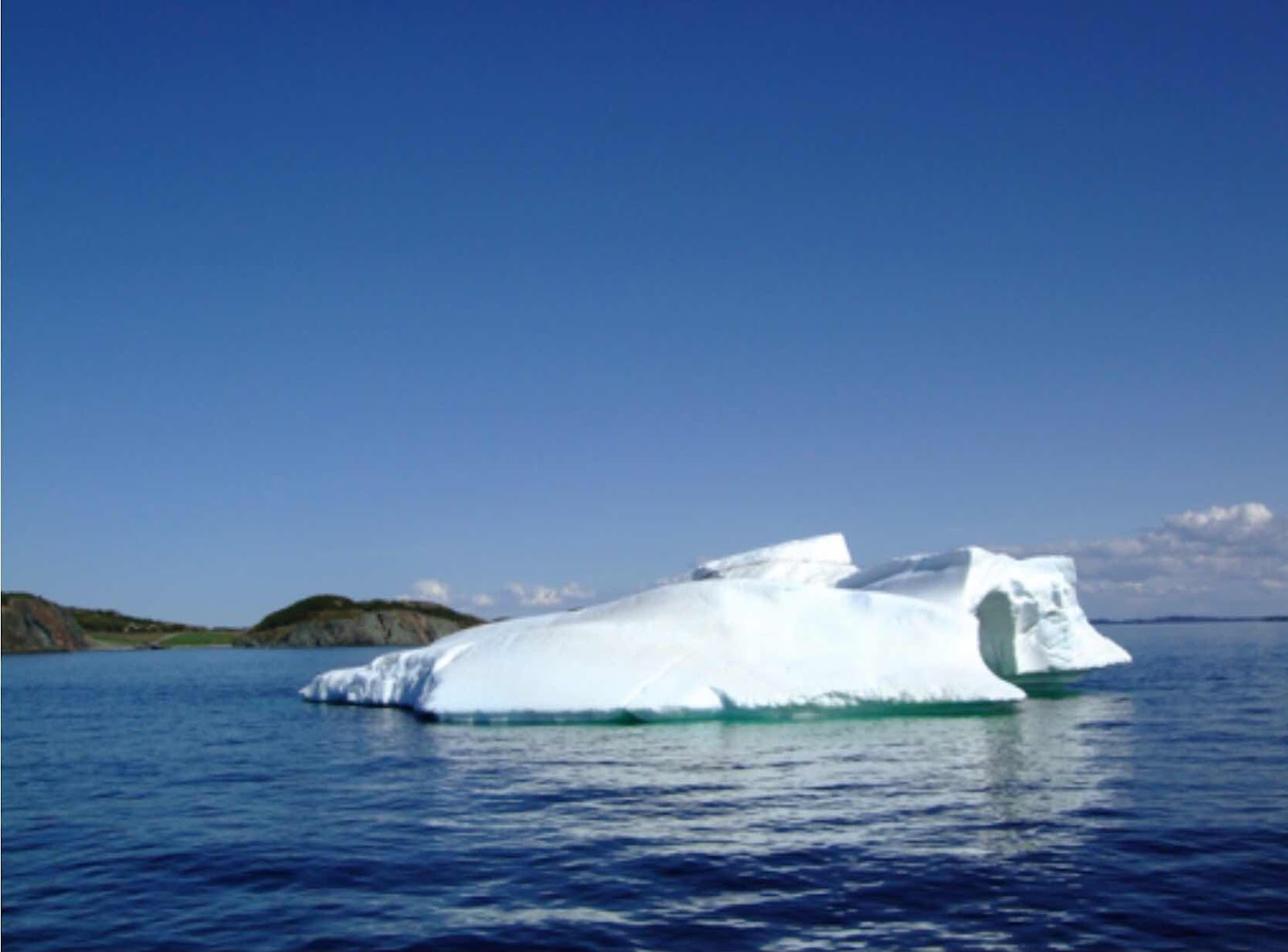 Over the coming months, many icebergs will be visible from shore there, some running aground, carried shoreward by the tides. The bergs usually appear in April and May, spring visitors after their long journeys. The vast majority originated from the glaciers of western Greenland and some from the Canadian Arctic.

Berg ice is different from the surface ice we see rafted into piles as the ice breaks up around our current island home of Prince Edward. No icebergs here, just wave action which causes rafting of surface ice. Piles of rafted ice can last for days after the ice disappears from the surface of the sea. 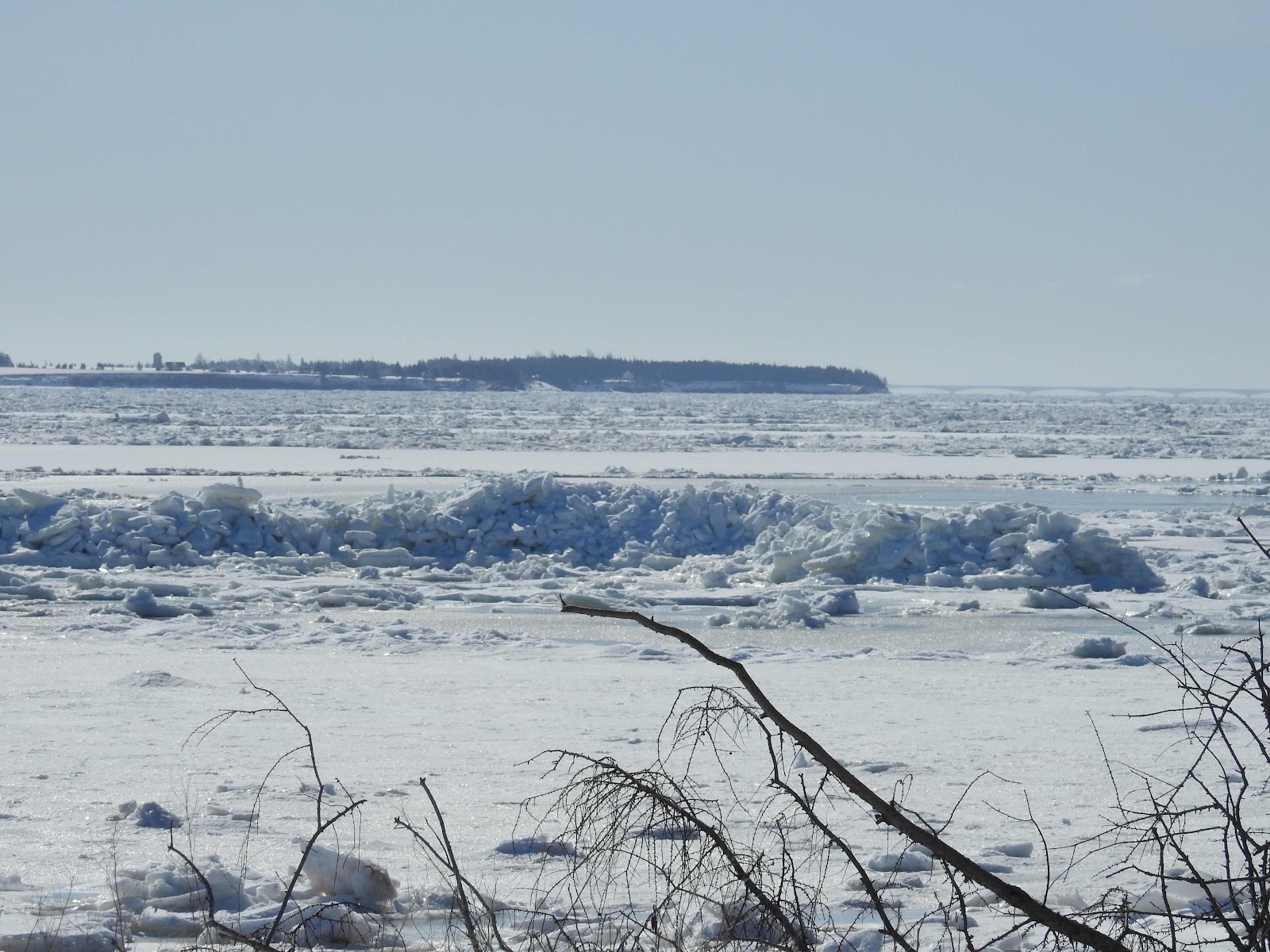 We lived in Newfoundland when our daughter moved back to Canada from London in the spring of 2009. We visited Twillingate, Newfoundland, the iceberg capital of the world, to see the icy giants. From shore, we saw numerous bergs in the distance. Close to shore, several floated around, spending their last few days subject to the tides taking them towards shore. 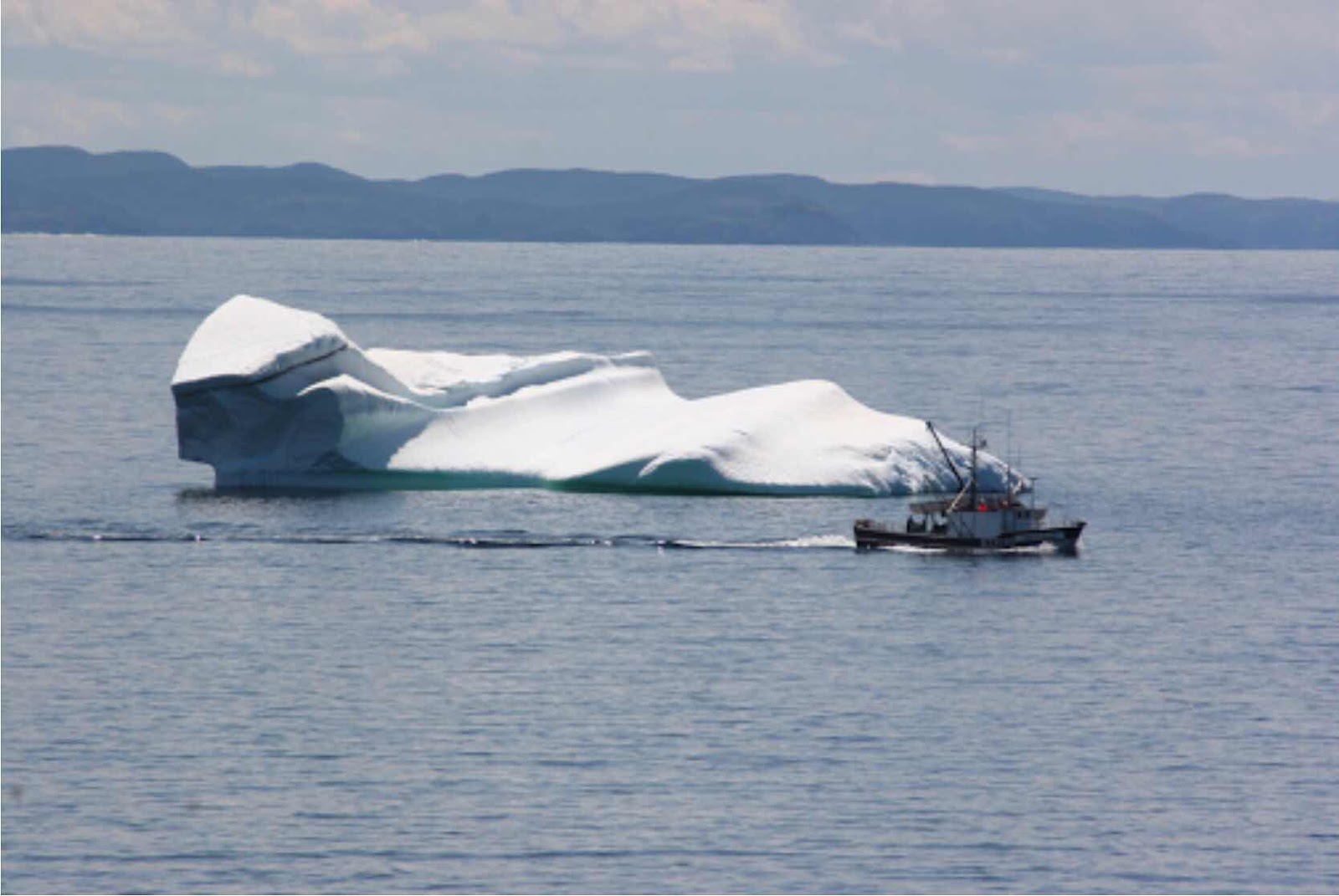 The display of icebergs offshore has been spectacular the last decade but I remember them from my youth as well. However, global warming has sped up the melt and break-away from glaciers. Iceberg Alley is their brief, watery home.

Numerous boat tours along the coast of Newfoundland take adventurers near the majestic giants as they make their way south with the Labrador Current. The bergs make the tour and fishing boats look miniature in comparison. 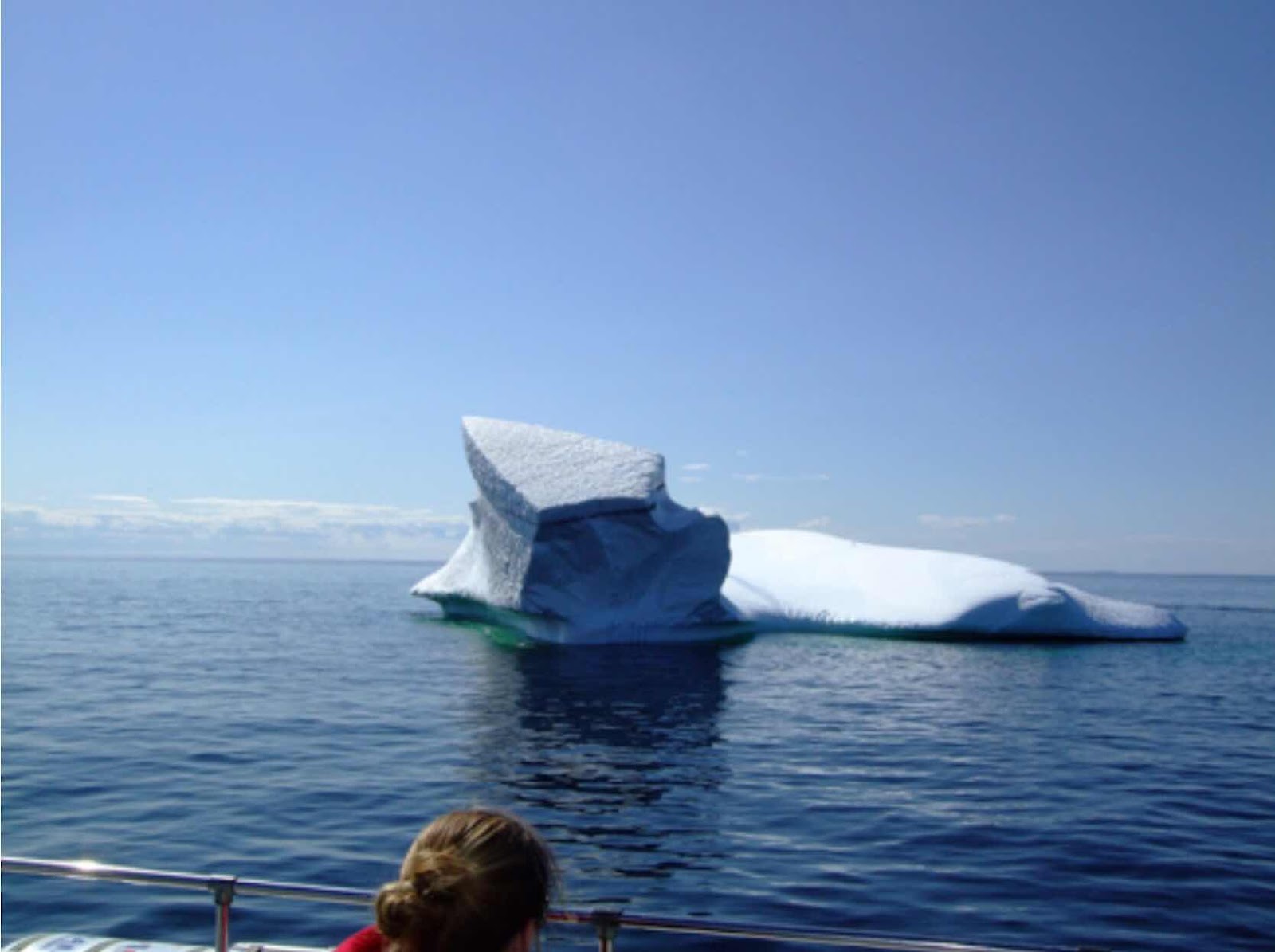 We tasted the ancient berg ice after some crew members grabbed floating bits from a nearby iceberg. It was refreshing. Enterprising people collect berg ice and use the water to make various products, including Iceberg Vodka.

While the ice around Prince Edward Island is not from icebergs, we watch every year for its evolution and eventual disappearance. It will be a few weeks before this ice is gone this year. 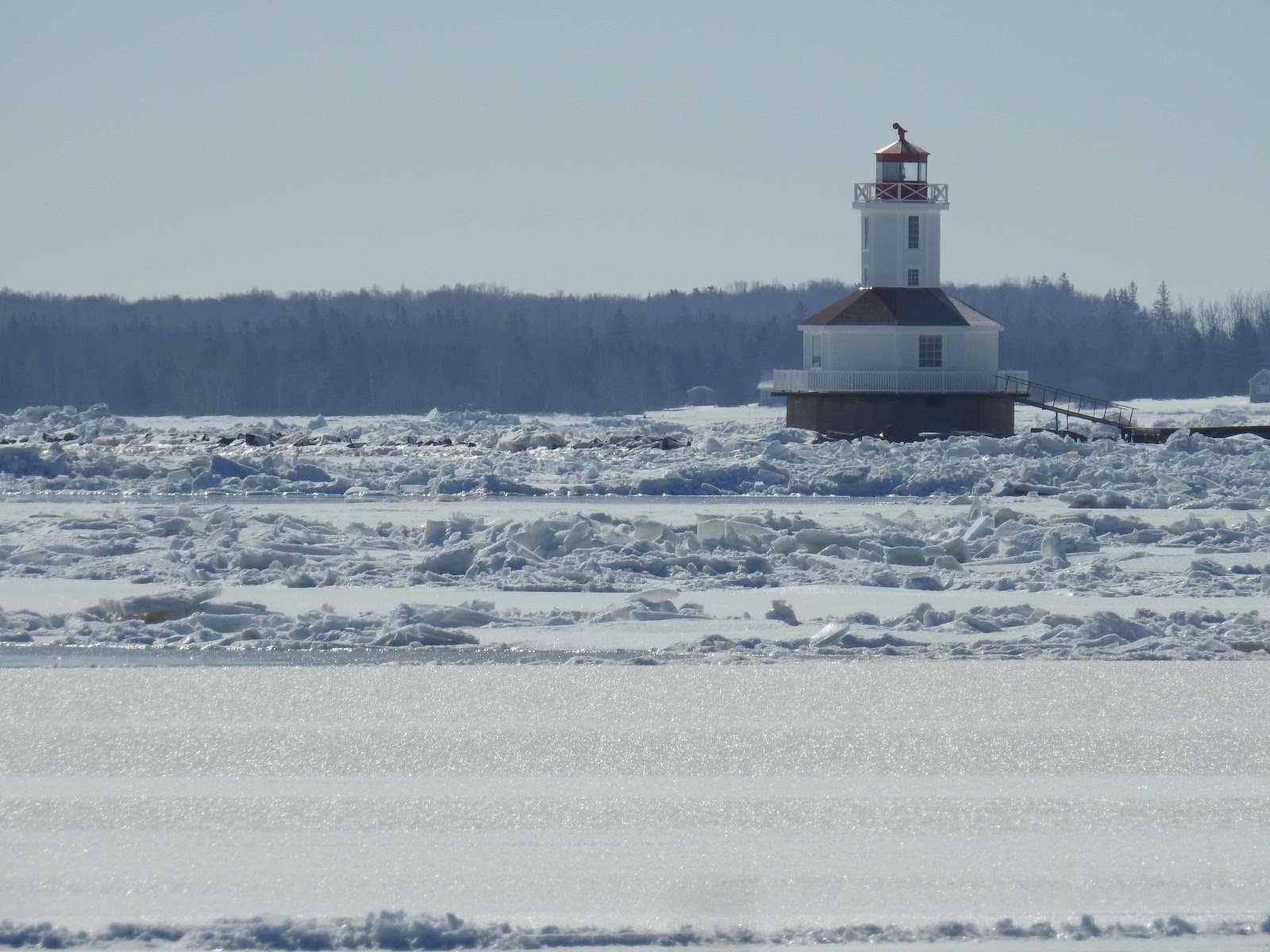 Hello,
It must be amazing to see the giant icebergs floating by. Beautiful views and photos.
Enjoy your day, have a great new week!

The year that we thought we might visit Newf, I realized that we were too late in the season for the icebergs. We went to Arizona instead.

The bergs are very beautiful. And you have a great explanation for inland readers like me. Thanks.

I'd love to see real icebergs some day!

I have this dilemma. Seeing a glacier is on my bucket list and yet, being cold is something I avoid at all costs. I may not ever get to see a glacier. I think the cold avoidance is stronger than the desire.

If those bunches of broken up ice, last longer, than when they can be seen on the surface, they must be a hazard, to boats........

Another part of Nature, to mark the turning of the Wheel Of The Year. -smile-

Oh wow, so gorgeous! I would love to see that in person!

Totally fascinating..The layers of rafting ice is spectacular.
Terrific photos and information. Wish I was there to see it myself.
Sue

I have never seen icebergs like these. Thanks for introducing me to Iceberg Alley. :-)

You can sign me up on the want to see an iceberg list. It would be incredible to see one live.

I was blown away to see Antarctic icebergs - with penguins on top, slipping and sliding their way to the sea.
I would LOVE to see the Arctic versions too. And your rafting ice.

Ive never seen actual icebergs! so exciting to see them floating past. And they don't taste salty? Hmmmm. thanks for another PEI adventure.

Iremember a visit to Twillingate in '92, going out to see icebergs. It was fabulous!

Seeing those giant icebergs must be exciting. Thanks fir sharing these pictures .

Both the berg ice and the rafted surface ice are amazing. What a marvelous world we live in. I've watched glaciers in the Rockies calve and it's an impressive sight.

It would be fun to see the ice for myself...both kinds..

Those bergs are incredible.

I used to live near a river that flowed into Lake Erie. Every spring there would be the problem of broken river ice jamming the mouth of the river and causing flooding. Serious flooding of roads and bridges.

I lived on the Hudson strait for two years but never saw an ice berg. We were in a deep bay and icebergs never came in. The bay ice went out at the end of July.

Ice is a powerful force and I don't think that people who have not experienced it can quite take in what it is really like.

Your gorgeous photos take my breath away! Such beauty!

Thank you for sharing first hand photos and story....

Have a wonderful day.

Gosh what an amazing sight, it was seeing the ship in comparison that showed exactly how big the icebergs are. Also astounding to see the lighthouse embedded in the snow. Wonderful captures Marie ✨

That boat near the 'berg' does add perspective. I would love to do that.

I have a nice blue bottle of Iceberg Beer from Quidi Vidi Brewery sitting on my desk. "Made with 20,000 year old iceberg water" says the label. Too bad the bottle is empty!!!!
I was in Newfoundland one May and watched the whole side of an iceberg break away and hit the water with a huge CRACK and splash!

such pretty images!! the iceberg is so cool, would be fun to see in drift on by!!

Such fantastic photographs! I love that 5th photo and easily imagine it as a postcard or framed print.

Wow, great photos. It must be surreal to see a real iceberg.

A few years ago my younger brother visited Newfoundland to see the icebergs. He promised pictures but didn’t follow through. Thanks for sharing your photos-they are truly amazing!🌸

this looks like miss snow fall drop her handkerchief on the surface of water :)

so lovely and gorgeous ,i bet seeing this process continuously and regularly is poetic and spiritual experience and broadens horizons as phenomenal course
tasting ice berg sounds exciting :)

That is amazing comparing the size of the iceberg and the boat. There is so much to see in this world if you get the chance to travel around.