A walk along the Bubbling Springs Trail

The trail around the Bubbling Springs on the north shore of Prince Edward Island is an interesting one. While I have already written about the springs, the trail itself deserves some attention.

Near the start of the trail is an old pioneer cemetery where many of the headstones disappeared long ago. The cemetery is behind a long pile of stones which nature is doing her best to overtake. This cemetery is the resting place of some of the victims of the Yankee Gale of 1851, a storm which lasted over two days, destroying 74 vessels of a New England fishing fleet and killing 150 crew. 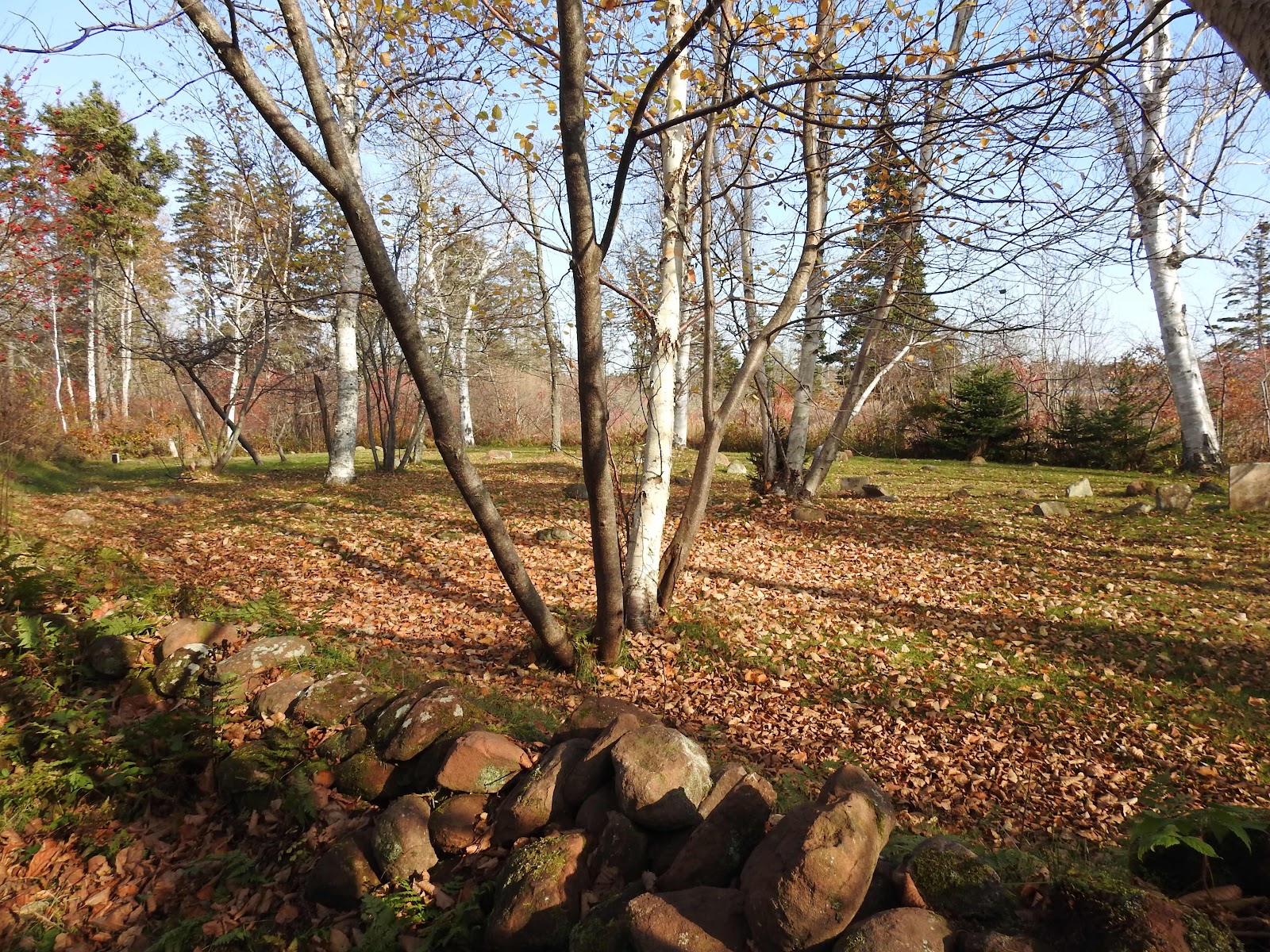 The crew members were buried along the coast of the island, far from their American homes. However they are not forgotten by islanders. We weren’t on the island long before we knew of the Yankee Gale and saw several cemeteries where crew were buried.

As we continued along the trail, we came to a shady forest of White Spruce which filled in the farmland of this area. The shallow roots of the spruce trees cause the trees to blow down easily, exposing the root system. This starfish found its way from the beach somehow. 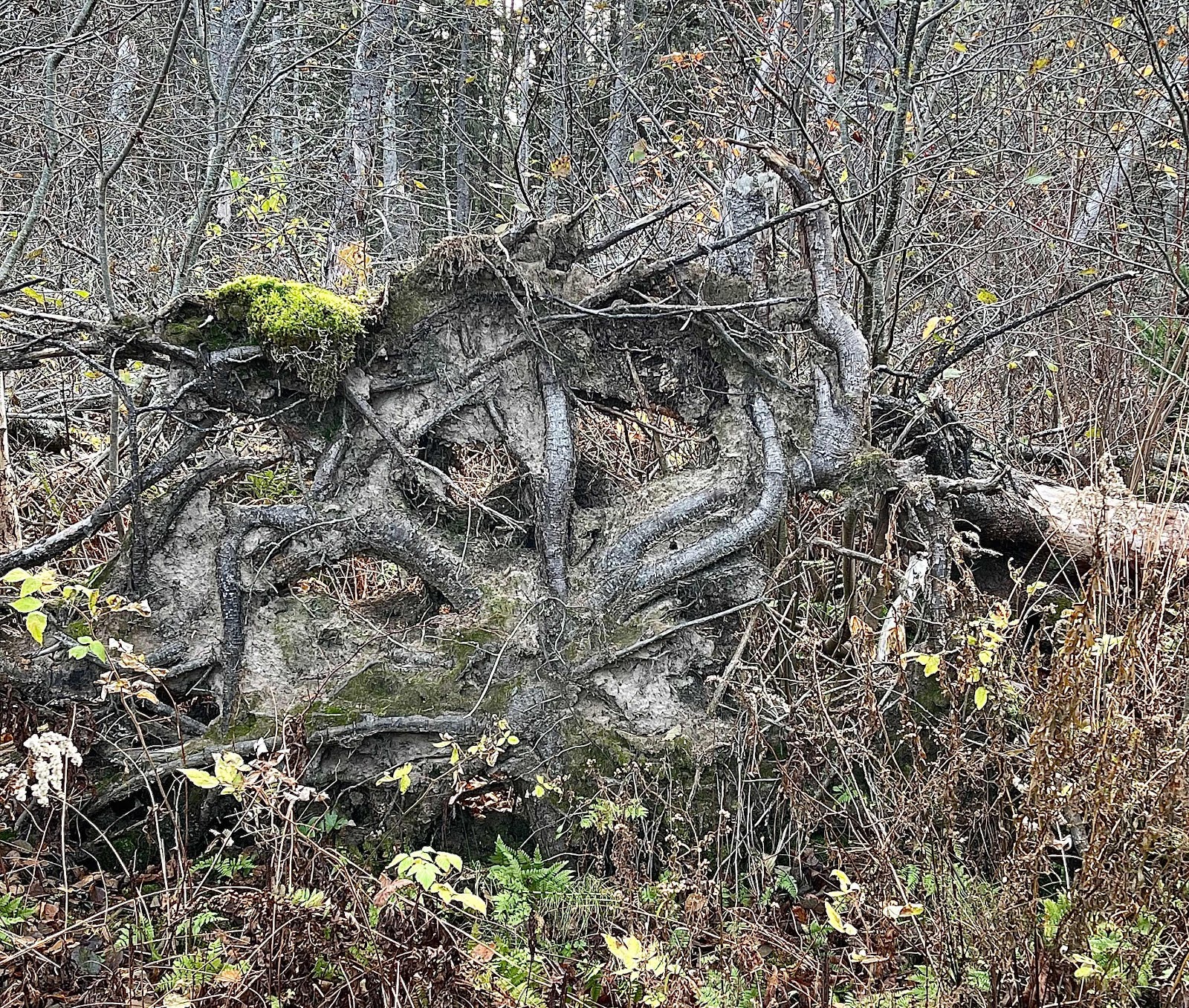 A number of trees had woodpecker holes but this one was unusual. The markings in the wood resemble teeth marks. What animal could have caused such marks? 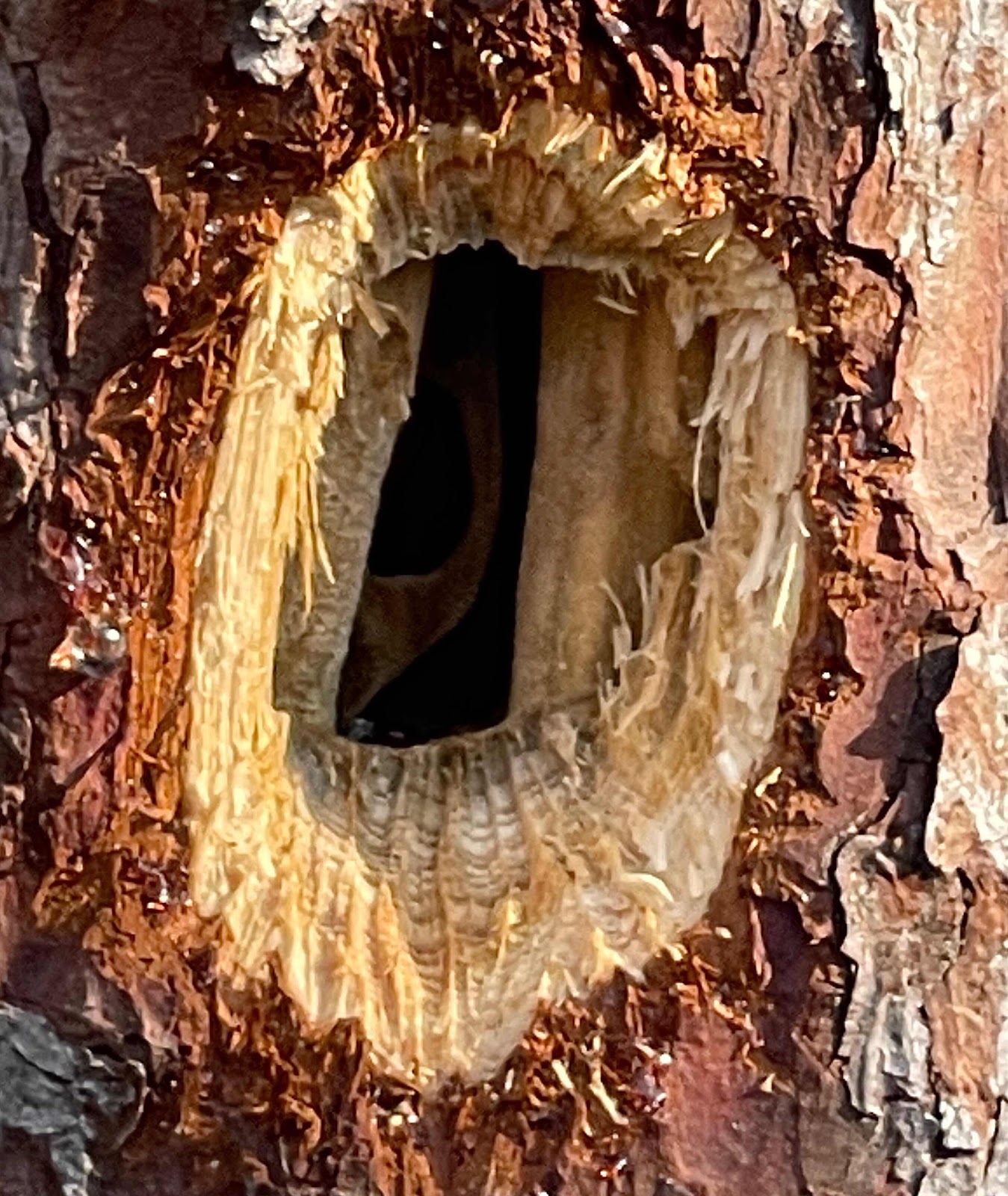 The only deciduous trees with leaves in this area were the oak trees. Many oaks keep the colourful leaves all winter. 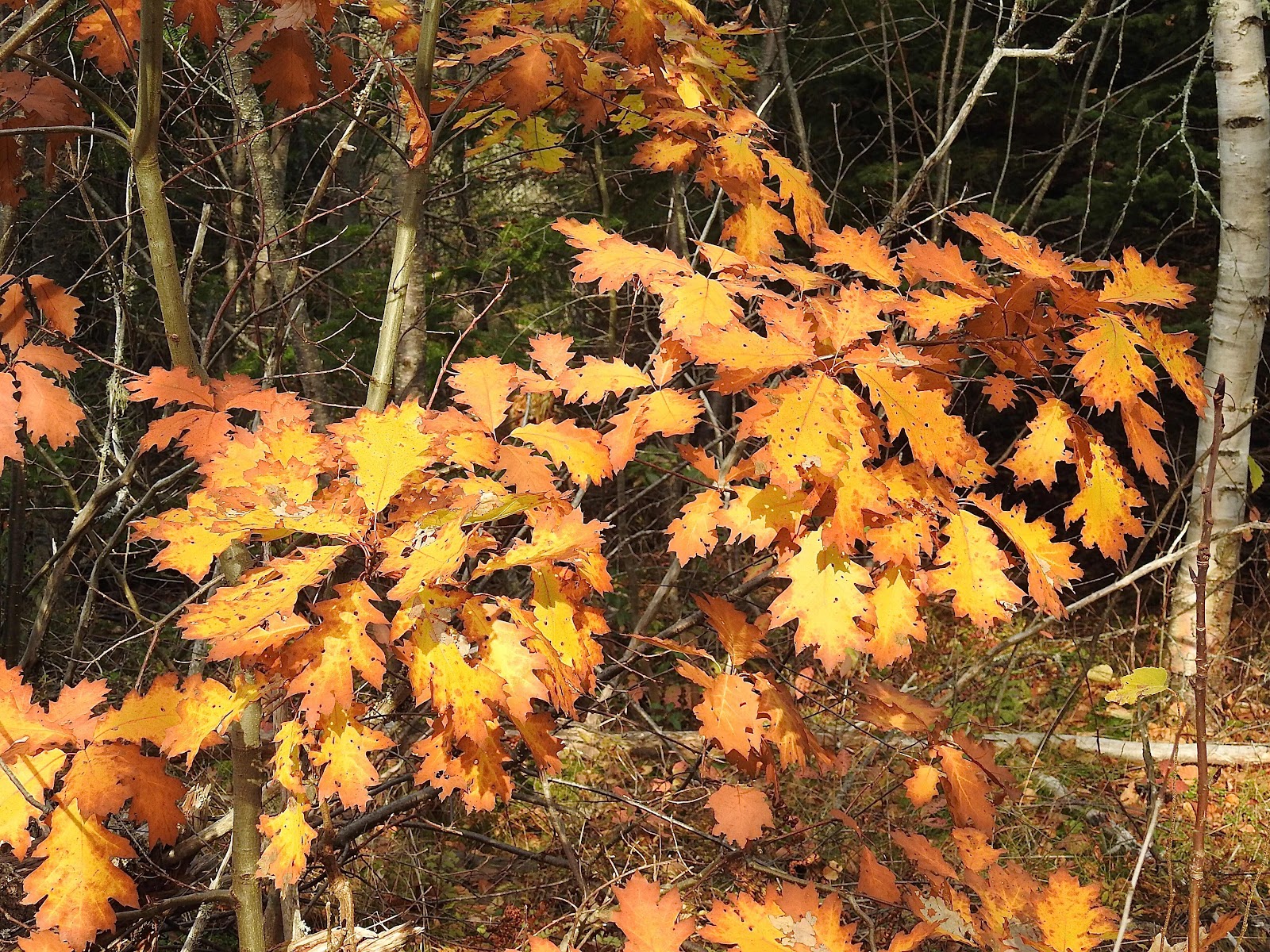 Orange-red berries were plentiful. One tree had enough food for many birds this winter. 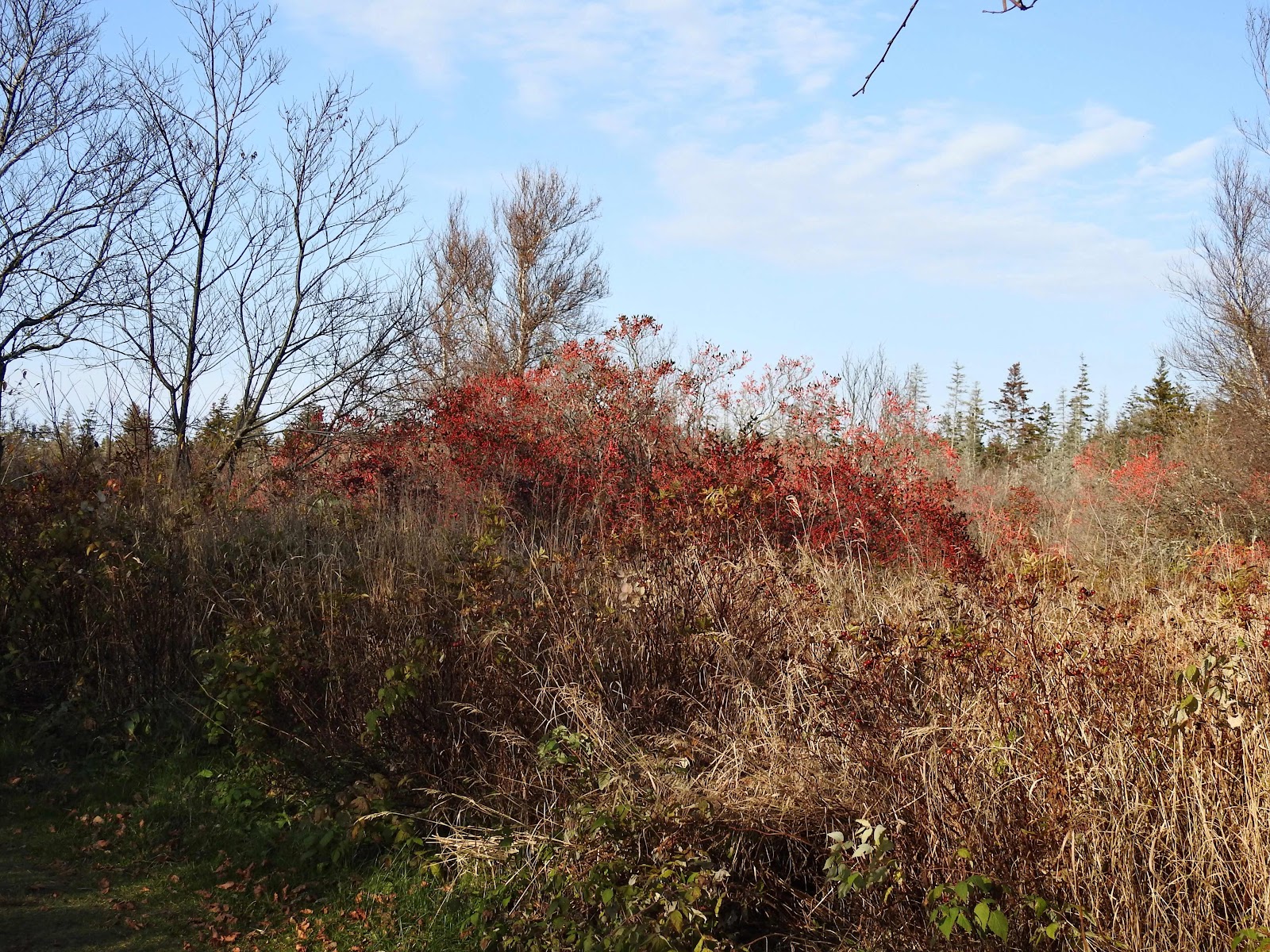 In one section of the trail, many of the trees have burrs, a reaction to a stressor during their growth. This huge one at the base of a tree looks like it has closed eyes and a nose. What could have caused this growth? 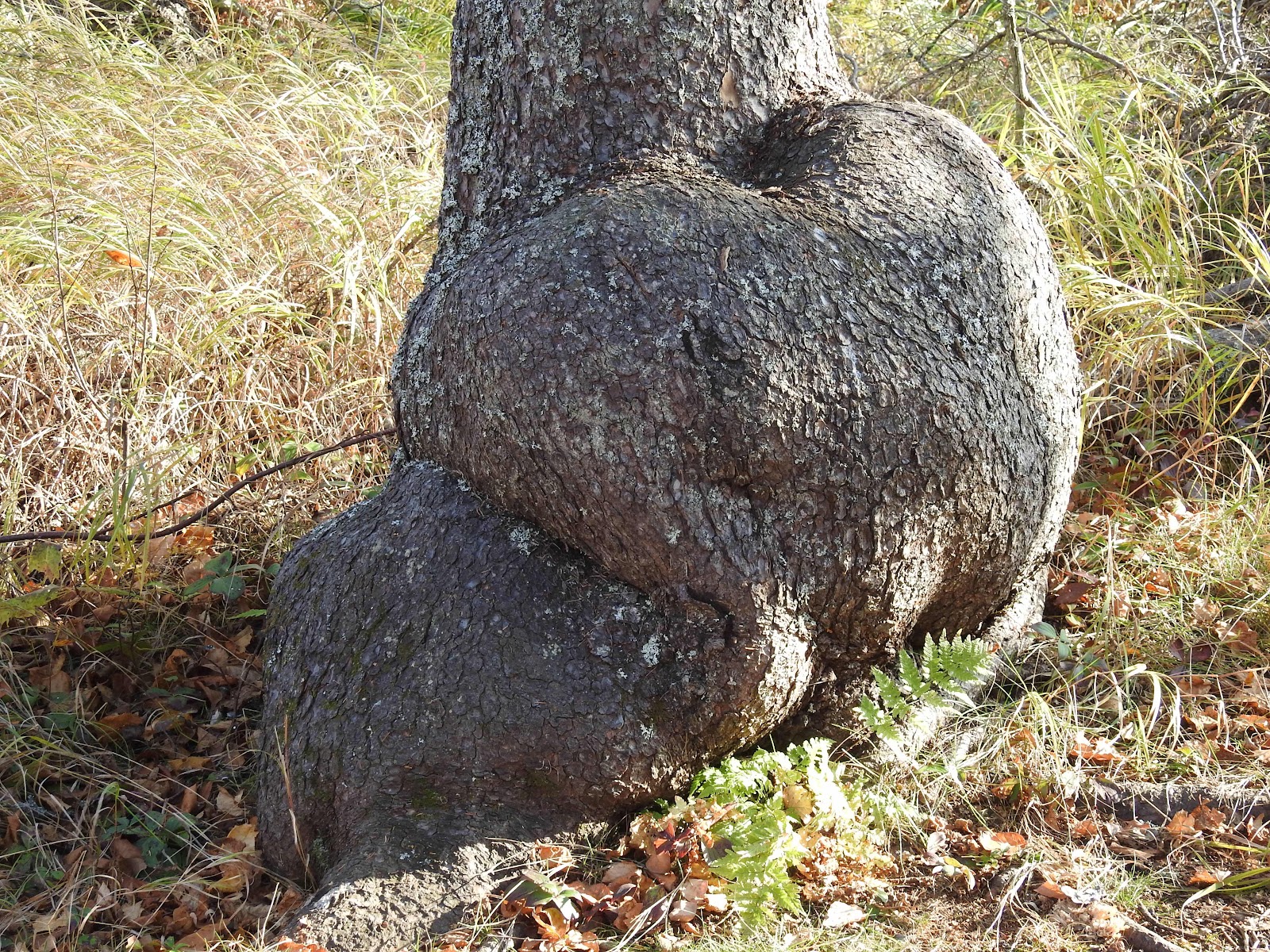 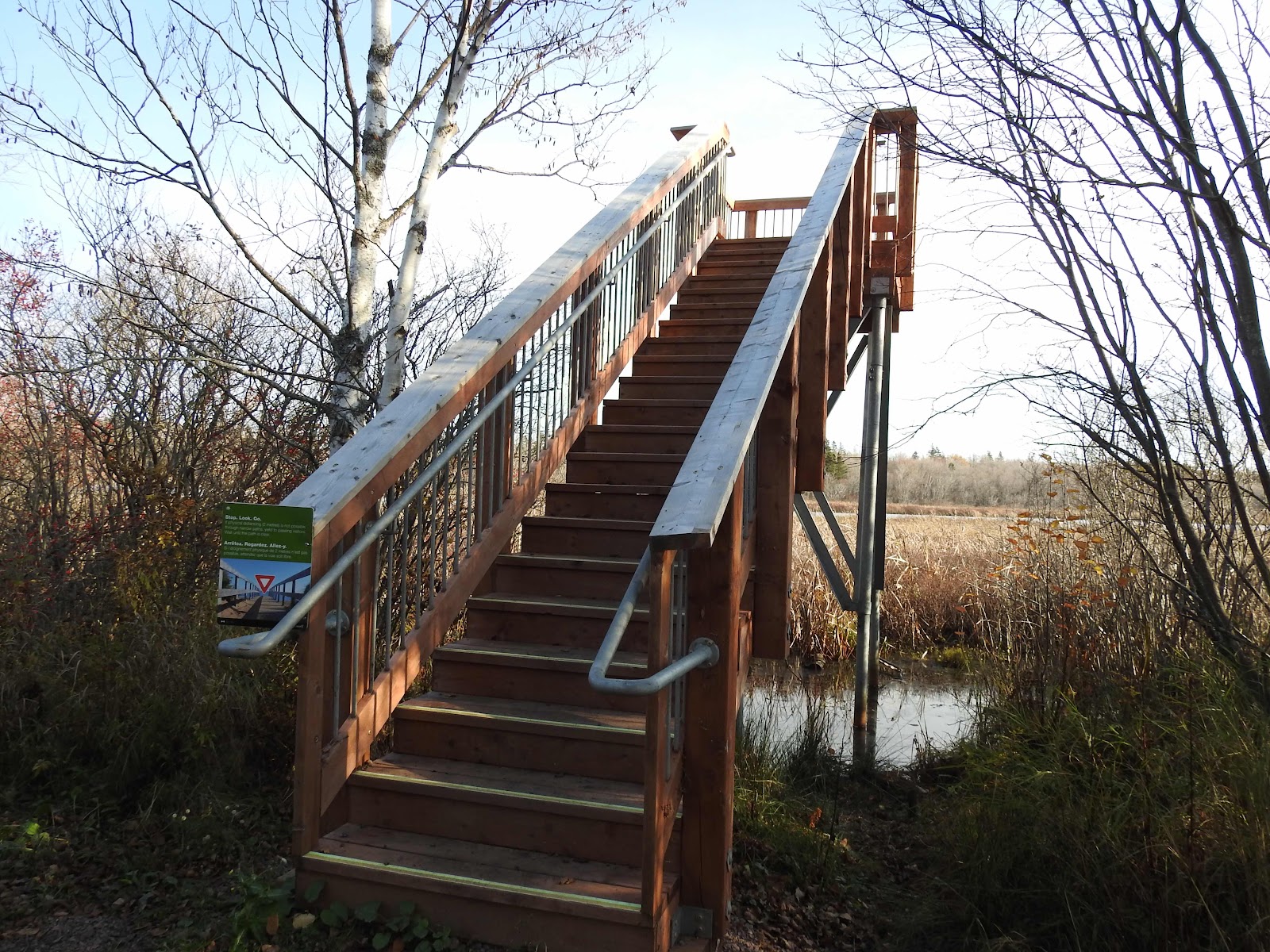 as was the wharf and hut further along the way. An observation deck from the road through the park is visible across the pond. The beach is on the opposite side of the road which makes Long Pond a barachois, a lagoon cut off from the ocean by a sand bar. 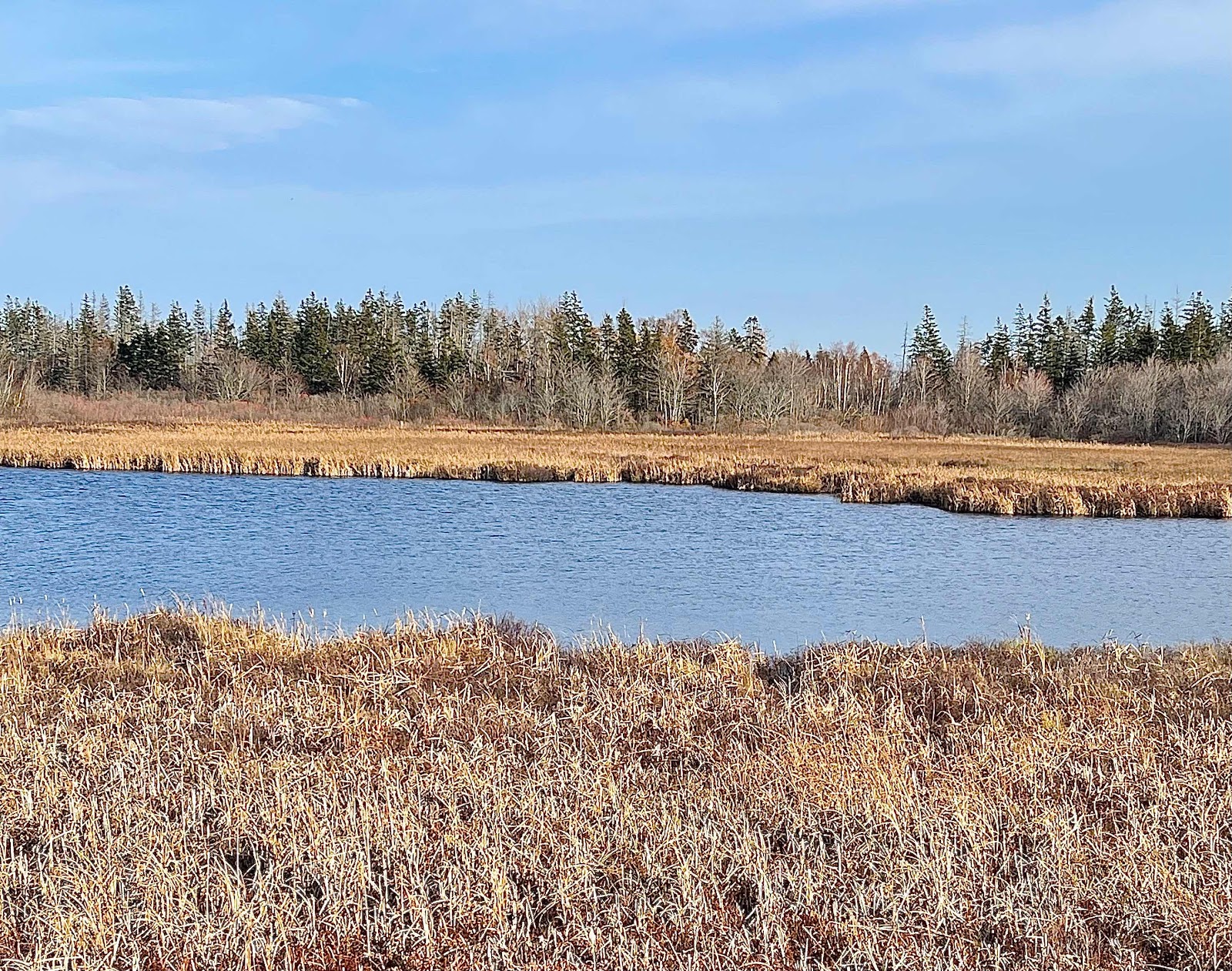 We enjoyed this trail which had something to see around every bend.

Thanks for the history lesson and the great photos. I enjoyed being with you on this walk. :-)

Could beavers have gnawed that tree? How high up were the teeth marks? Maybe beavers with wings now?

Such pretty autumn colors in your area. How sad it always seems to me to hear of ship wrecks and lost crew members. It is sad that the old cemetery is taken over by the trees and nature. Maybe a beaver made that kind of hole? But they usually just chew a tree down........so it is very mysterious. Let us know if you find out.

Thanks for the walk and info. It sure looks like a great place to explore.

Thank you so much for taking us with you - again.

you find awesome spots to walk and have shared so much information about the history of this area. i thought all cemeteries were suppose to be maintained?? i enjoy the pictures and i love knowing the history!!

the hole in the tree is an odd one, i have no clue!!

We think it might be a beaver. Then again, this was a wonderful walk and nice float the day before. Thank you.

I have a feeling you have endless paths and nook-n-crannies and treasures all over your precious island there, Marie. I would never know of most of them if it weren't for you, so THANK YOU for your show-n-tells!

Your last shot is my favourite.

Visiting from Ohio in the US...what a pretty spot for a fall walk, so many new things to discover! Mary

We have a bowl made from a burl - one of our prized possessions.

The shape of this hole would indicate a pileated woodpecker.

You’re right. Fantastic. The rectangular shape is a give-away.! Thank you.

I was glad to see the answer to what made the hole. I would love to know what made the growth on that tree! This looks like such a nice place to go. I was messing around of the maps, and found first a place I had never heard of before...it may not be much but at least it is something to check out.

Then found out that a nearby town has a walking bridge over Wabash River. I am just so anxious to go see it. Not sure how I will feel about walking over it, but I think I will be fine the way it appears to be built...

What a sad story the Yankee Gale is. It seems weather has been responsible for much misery over the long years, so nothing new in the storms today.
Thanks for sharing this lovely place with us :)

Very interesting things you found along that trail! Barachois is a new one on me. I do think that's a Pileated Woodpecker hole. They always tend to be redtangular like that.

There is lots to see on that particular trail. The starfish root is a nice bit of whimsy. The Yankee Gale is a sad tale, with so many lost at sea.

Such interesting history! I no longer blog but I do enjoy reading blogs. Your blog is fun and informative. Have a great weekend!

That root is crazy interesting.

I learn so much from reading your blog, Marie. How very sad for all those families so long ago. I guess the islanders would also have suffered from the gale.
I love the 'starfish'!

I didn't know oak tree kept there leaves all year.
Coffee is on and stay safe

Hello,
Pretty images from your walk. I agree with Red on the Pileated woodpecker hole, they do make rectangular holes. The hut looks like a great bird blind.
Pretty Autumn colors. Cool captures of the tree roots and the burl. Take care, enjoy your weekend!

I like the muted colors; thank you for sharing this lovely place.

You have captured Nature at its finest.
I do wonder what made that hole in the tree. Some animal has a very nice protected home.
Gorgeous leaves and wetlands.
Sue

That is some big hole in that tree. What kind of a bird made that? A pterodactyl? You certainly run across some interesting things.

Marie,
Your fall photos are gogeous. Thanks for taking us along the Bubbling Springs Trail. The hollowed out tree is quite interesting.

Wonderful pictures. I've always wanted to go to PEI. Thanks for the tour.

Do swing by for a visit

The latest National Geographic was about Canada and had a long article about Prince Edward Isle and your (I believe they said over 450 miles) of walking trails. I was very tempted to tell them that your photographic tours are better than theirs ...

Thank you for the story and the pictures. The last one is my favourite.

Hahaha. I thought the tree looked like a behind! Shows where my mind has been. The hole in the tree was very interesting.

I was immersed in your post. It felt quite relaxing.
: )

I do wonder what chewed that tree! And I love seeing old exposed roots. They are fascinating.

i found the history of cemetery very sad specially the storm .

despite of gloomy feeling i so enjoyed the really intriguing images you shared here ,such an accurate name for the weirdly bundled up trees "Star fish" it actually looks like one .

the pattern of cutting of the tree also looks unique and interesting and i am also curious what can cause this ?

the trail had special views indeed .