Moody sky day at the beach

There is something to be said for a moody sky day at the beach. And it was such a day recently when my husband and I headed to Cousin’s Shore for a walk. Overcast with sunny breaks, the wind made it cold enough for gloves for the first time this autumn. The moody sky created some drama as thunder clouds were interspersed with patches of blue, nature unsure of how she felt that fall day.

Cousin’s Pond lies behind the dunes along the north central coast of Prince Edward Island mere metres from the sea. 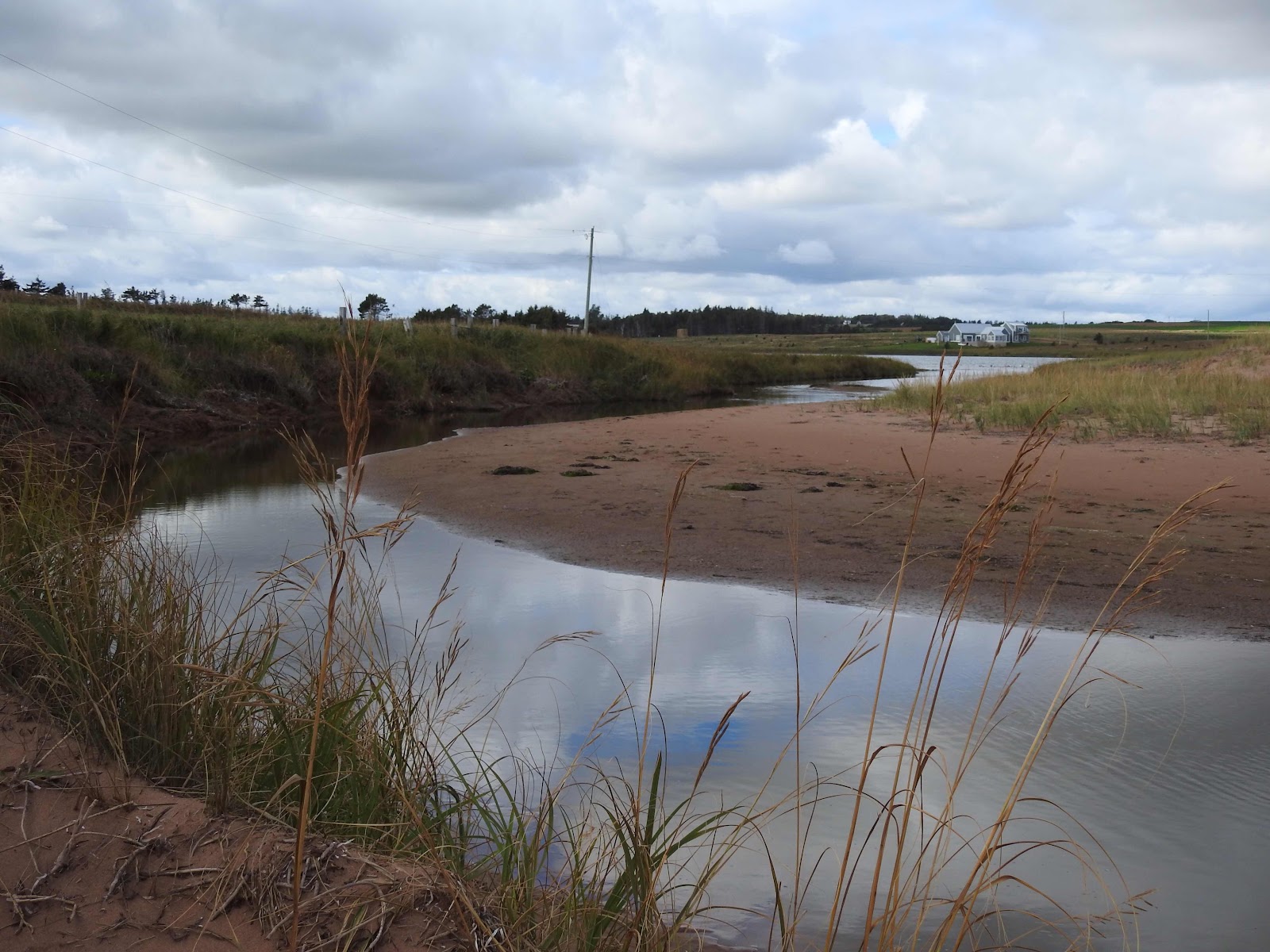 A stream from the pond wends its way through the sand into the Gulf of St. Lawrence. 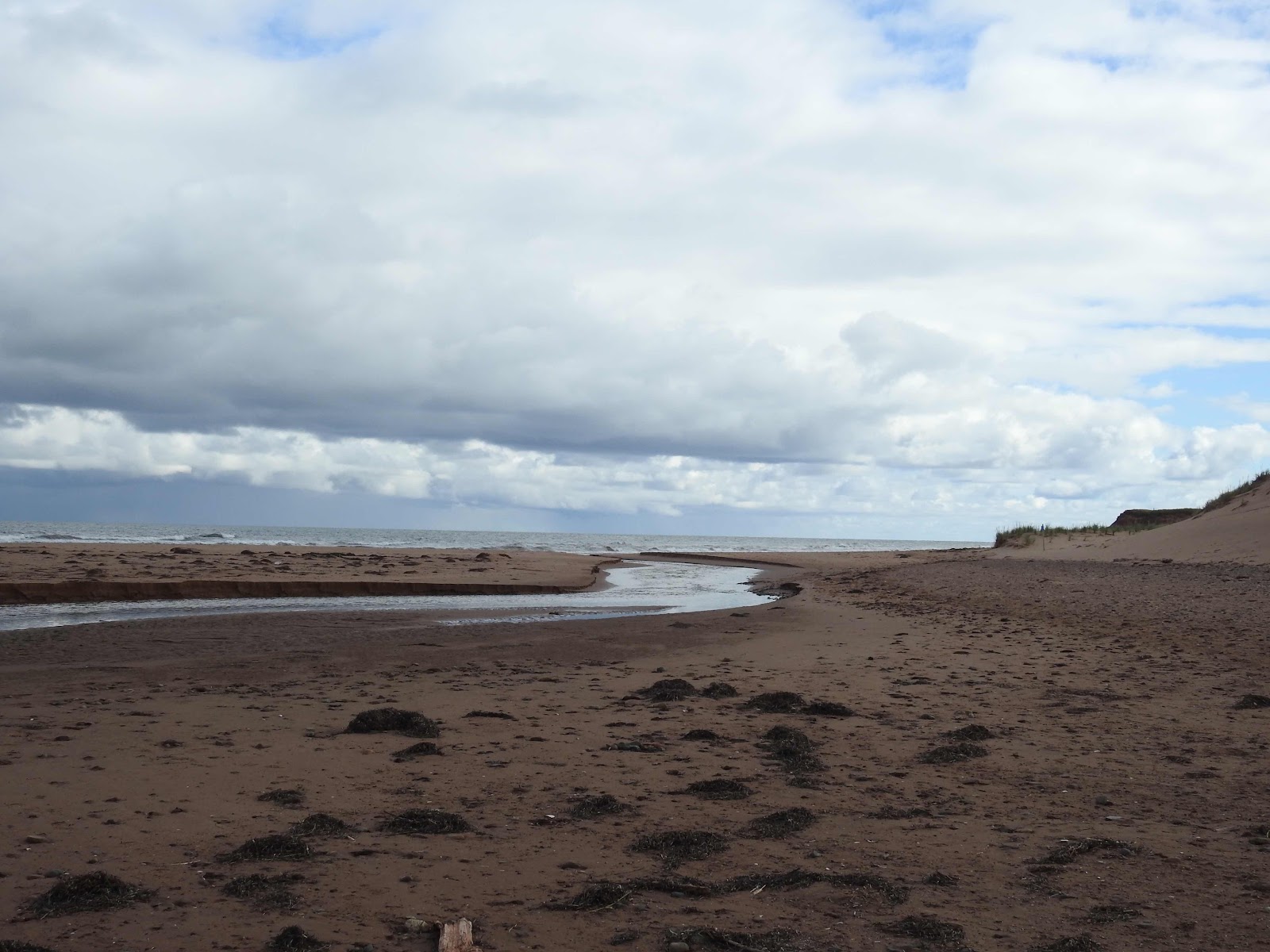 I walked along the meandering stream to the beach and listened for several minutes to the power of the moving water, the constancy of the stream and the rhythm of the sea. The sounds of the water filled the senses. You can see a short video here.

The grey blue cloud over the reflected grey of the sea looked ominous at times. 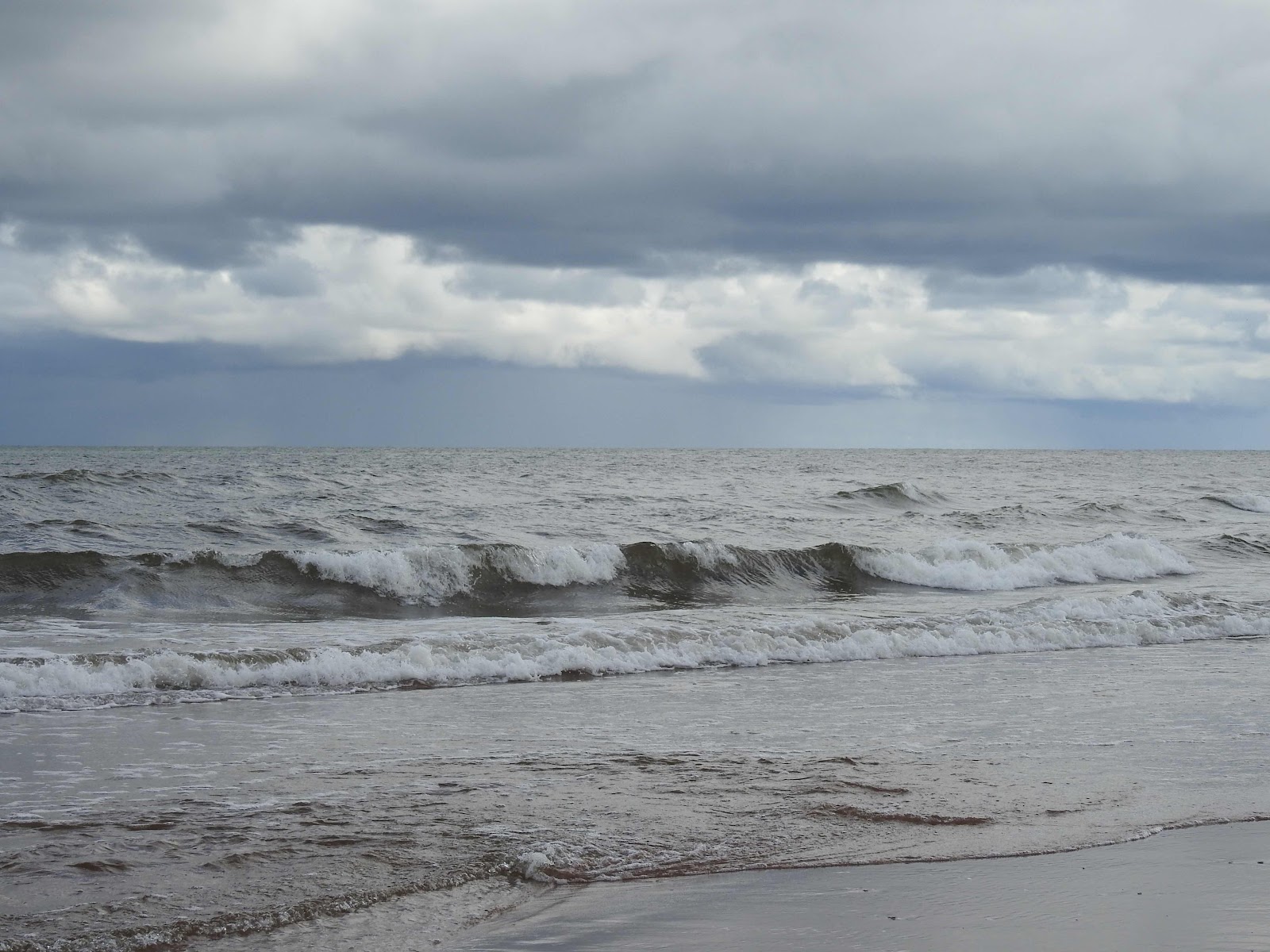 However, periodically breaks in the clouds gave a blue sky reflection on the wet red sand. 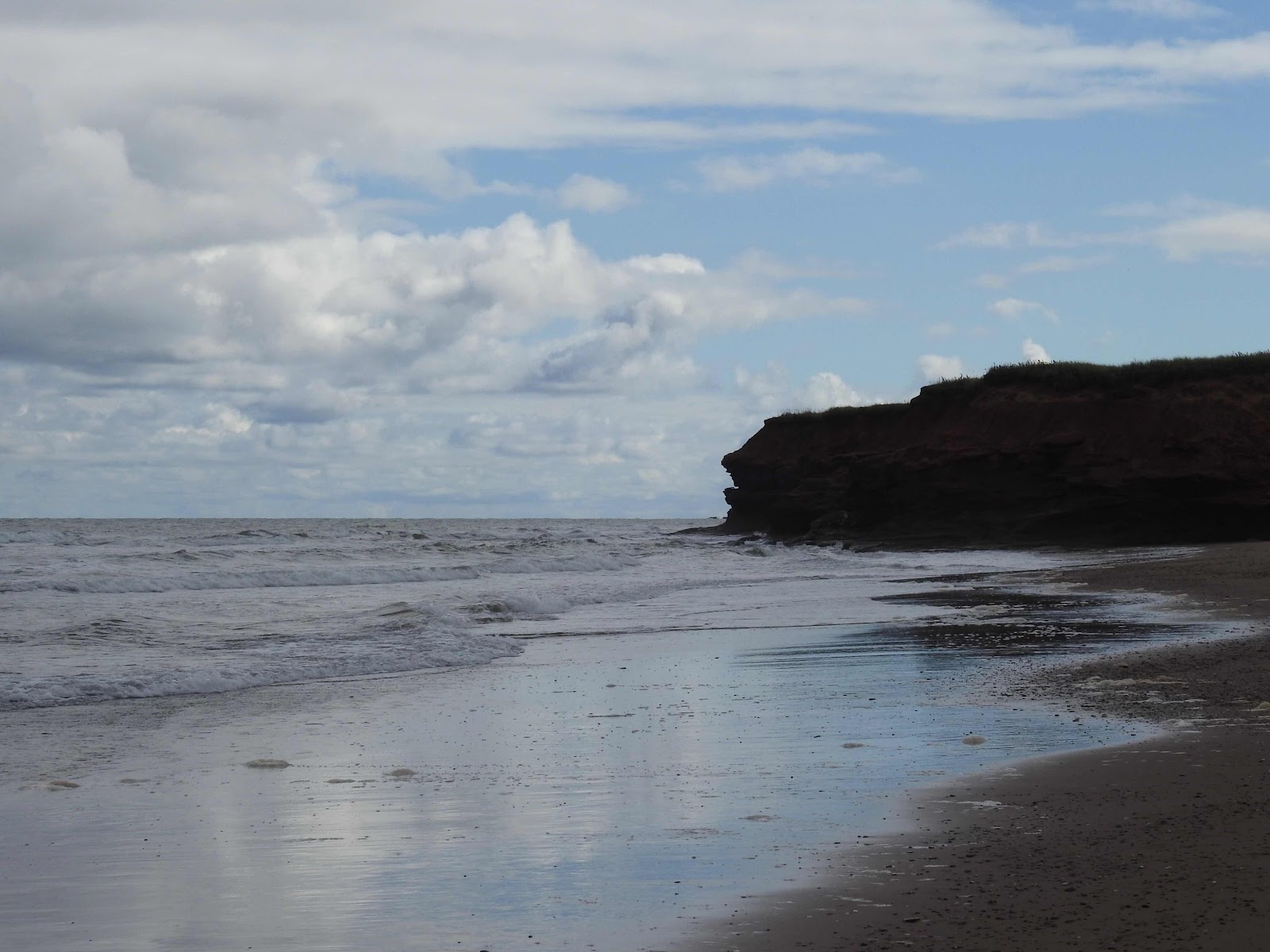 We walked the beach which is lined with cottages and summer homes behind the dunes. One, partially hidden by the dunes, resembles a lighthouse. 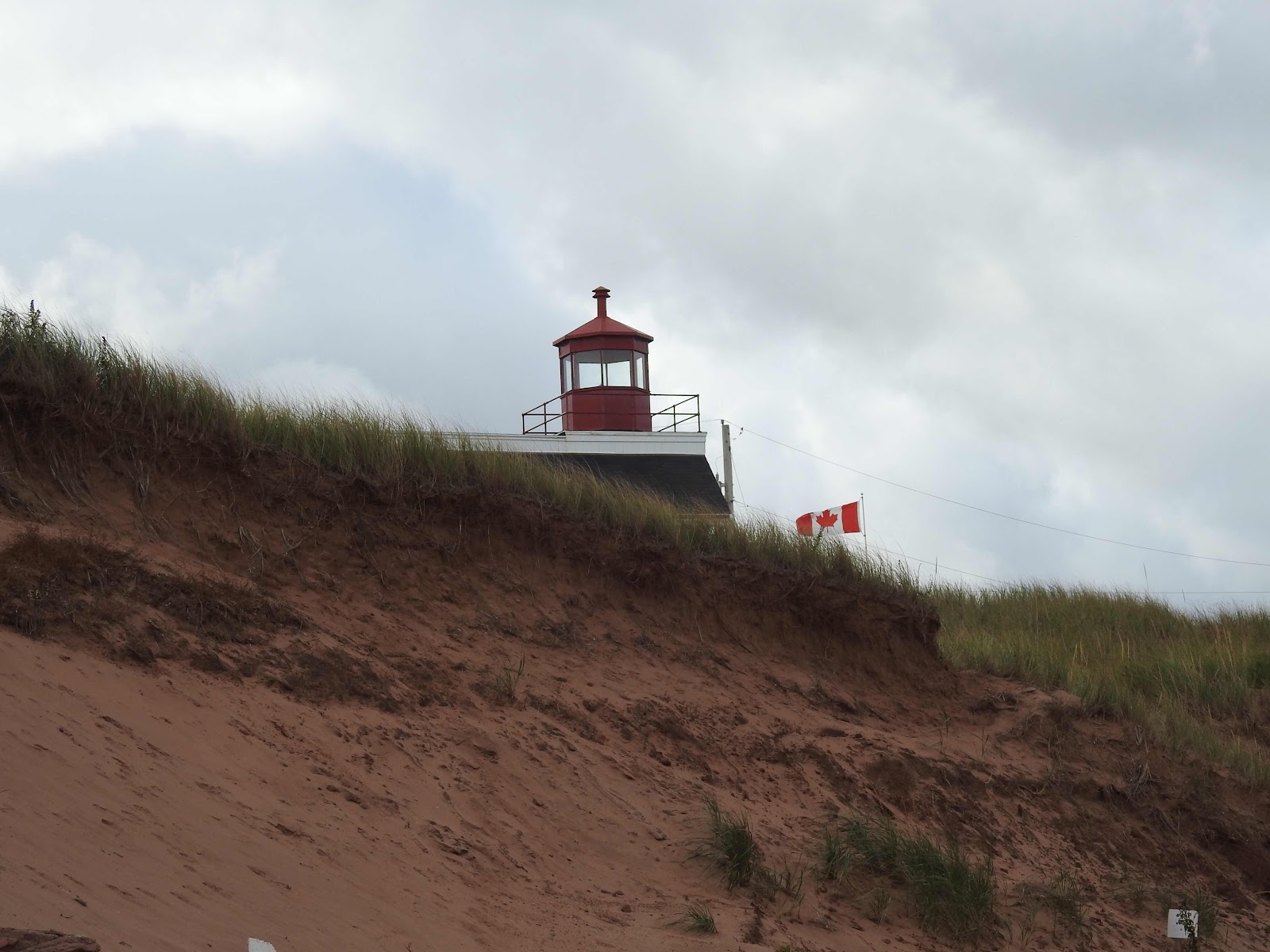 A dune restoration project of the cottagers and the Island Nature Trust is underway in the area. Several strategies are in use, one involving dead conifers placed horizontally in exposed areas. 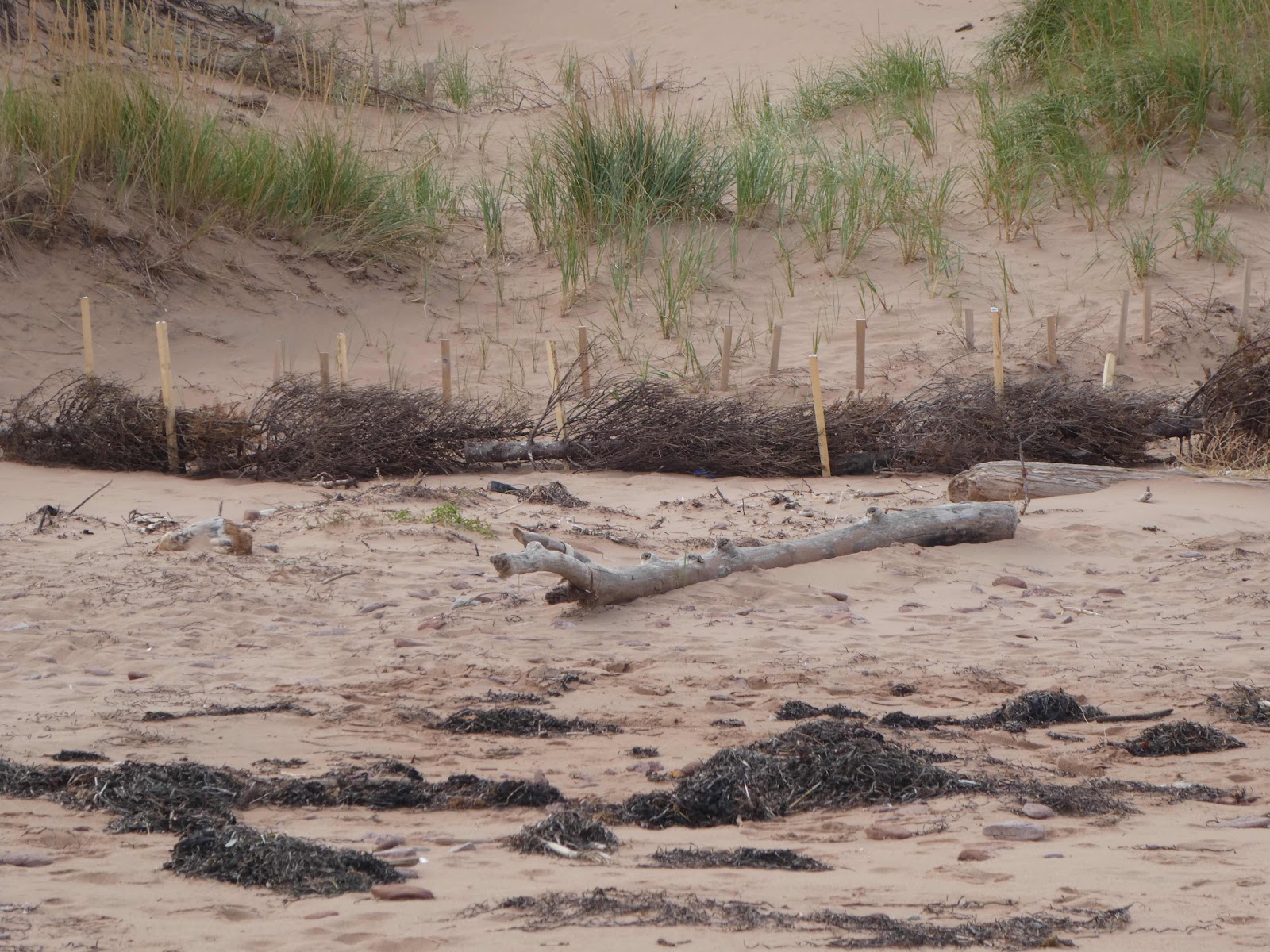 Some driftwood along the beach has characters within depending on which way you look at it. From one angle, a gull appears in the wood. 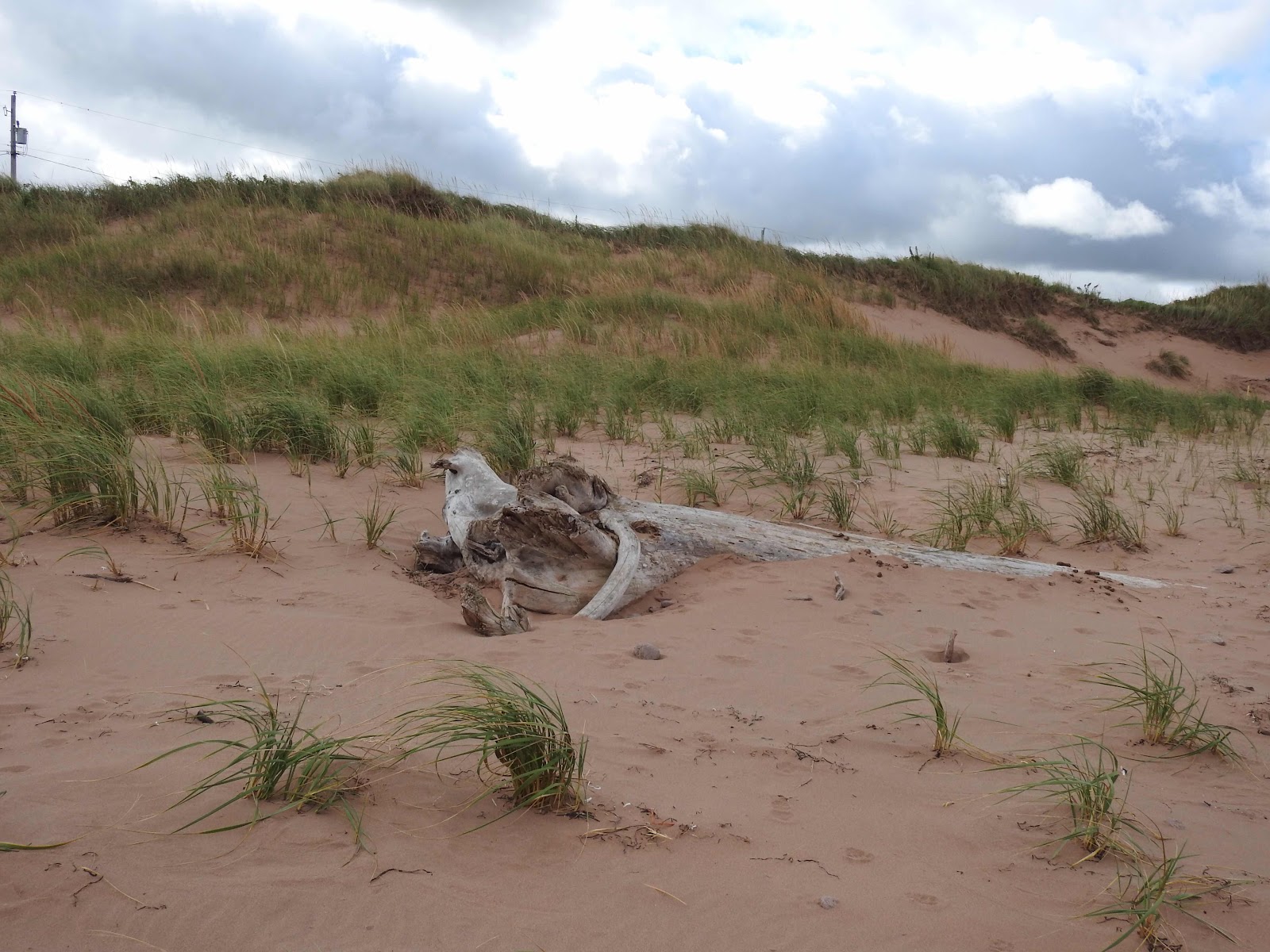 From a few feet west, a rodent’s head rests on top.. 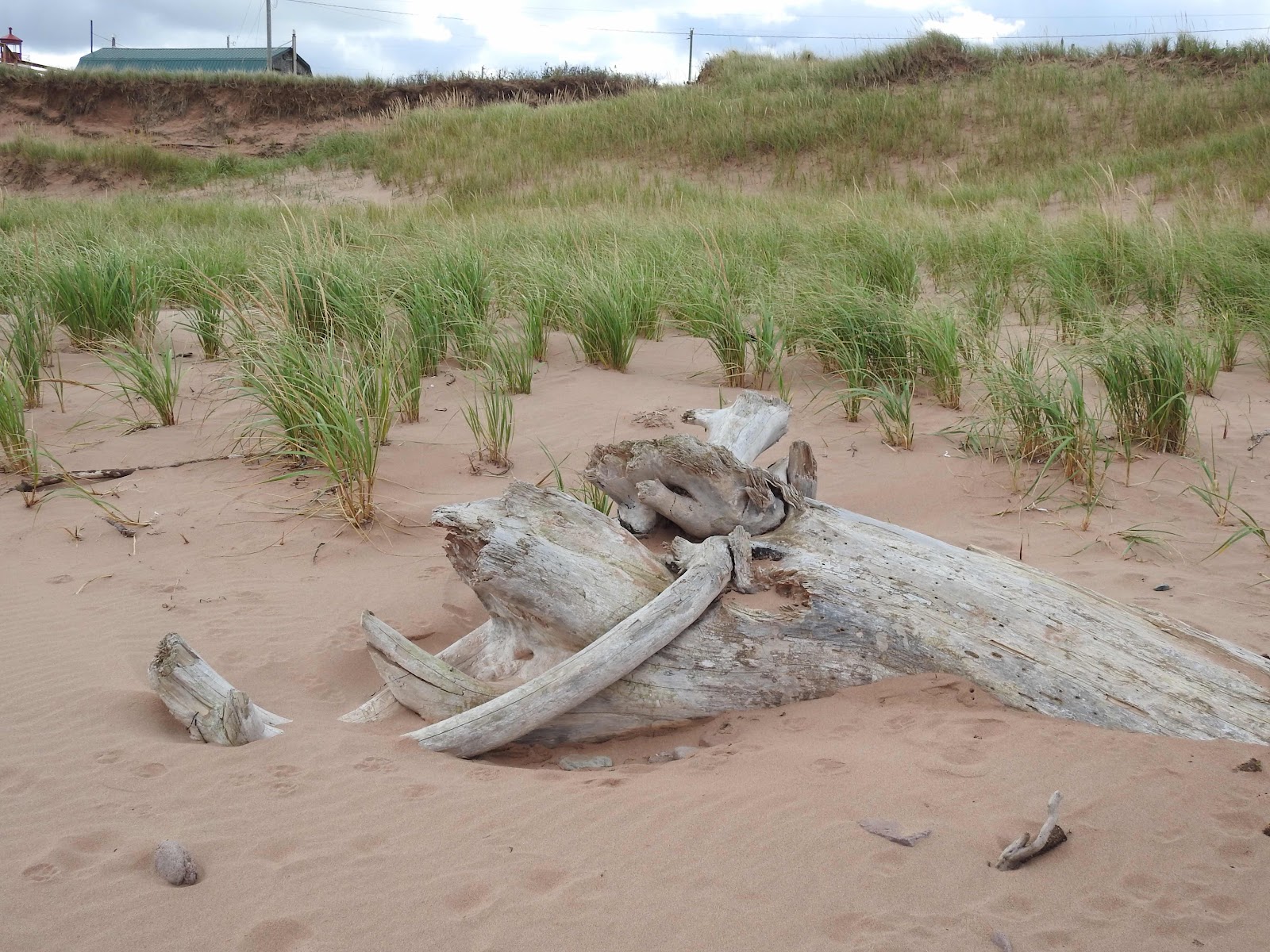 On the way back to the car, the plants on top of the sand dunes are reminders of warmer days when Goldenrod bloomed against a late summer sky. However, winter is on the horizon! 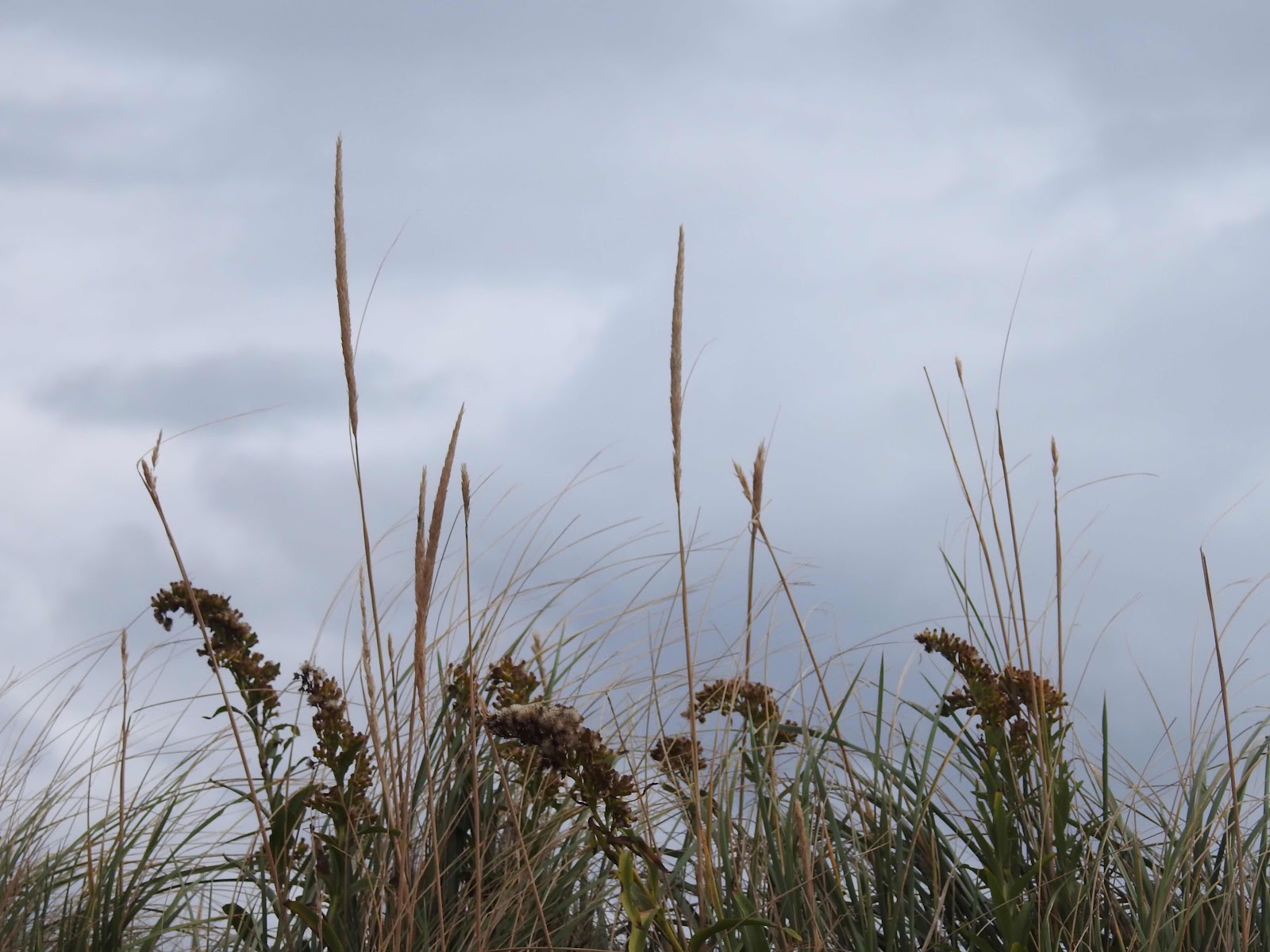 This time of year, we *should* embrace a moody ambiance. And find the loveliness, in it.

I love the Moody skies and the driftwood creations.
Chilly but such a lovely walk.
Sue

Moody and magnificent. Thank you for the video.
I thought that gull was real and had to take a second (and a third) look. I am so glad that you are walking again - and taking us with you.

A beautiful walk along the coastline. Great narrative, Marie, it's like reading a picture book. Thanks and have a wonderful weekend.

These are wonderfully taken.

Oh, i so love clouds like these...I just never tire of them.

You see beauty in all things ... it is so refreshing and I'm happy that you share it with us.

Just to have a beach close by to enjoy a moody day would be awesome. Beaches close take a seven hour drive.

Look like possible winter is on it way.
Coffee is on and stay safe

It's wonderful to get out and sample the landscape in all its seasons. Seems like you are on the road to recovery, Marie.

Lovely images from your walk at the beach. It looks so peaceful, I love hearing the sounds of the sea. Take care, enjoy your weekend!

Moody photos can be difficult to pull off, but manage fairly well.

Goldendaze-Ginnie said it perfectly ... "You see beauty in all things ... it is so refreshing and I'm happy that you share it with us."

Moody November - loved the little video and the sound of the waves. I saw the gull in the driftwood. Take good care and have a great weekend.

For many this would possibly be seen as a drab day but you have found and enjoyed its natural beauty.

There is something special about walking along a stormy beach, the atmosphere is so vibrant.
Many of our dunes also suffer erosion problems, and there are ongoing efforts to plant more native grasses as well as fencing to prevent the public from walking through the dunes (except where there is a designated pathway).

Wonderful pictures, magnificent skies! I thought that was really a gull for a minute. :-)

Beautiful pictures from a lovely walk!
Have a happy Sunday and take care...
Titti

such beautiful captures from your time on the beach. i love the wood, i would love to feature that in my front garden!!

I love the sound of the sea. Are you sure that wasn't really a gull?!

I feel I was on the beach with you. I love the beach but seldom see one anymore as I live in the mountains far from the coast. Stormy clouds looming over the angry water tell their own story. Thanks for taking me on your walk.

yes like us Nature seems to have different moods too dear Marie :)

i bet we have moods because it's the behavior of Nature as well ,each mood reflects her different side displaying another unique beauty before eyes with certain glory and particular message :)
loved the all shades of her moods here !