It was the afternoon of New Year’s Eve. My husband and I were headed to our daughter’s home to spend the evening with family. I decided to walk the boardwalk before the rich food and champagne.

I saw the party as I drove towards the parking lot. In the bay, now partially covered with sloppy ice and snow after the melting temperatures this past week, a huge gaggle of geese floated in the open water. It’s a strange sight for this time of year. The geese are usually gone by now because the bay is frozen by the start of a new year. Exiting the car, it sounded like the party had started hours ago, the imbibing well underway. Some geese were tipsy, that’s for sure. You can see the partiers here.

The geese had a beautiful setting for their revelry, with the rafts of ice from the ice melt along the shoreline having been taken to sea by the receding tide. 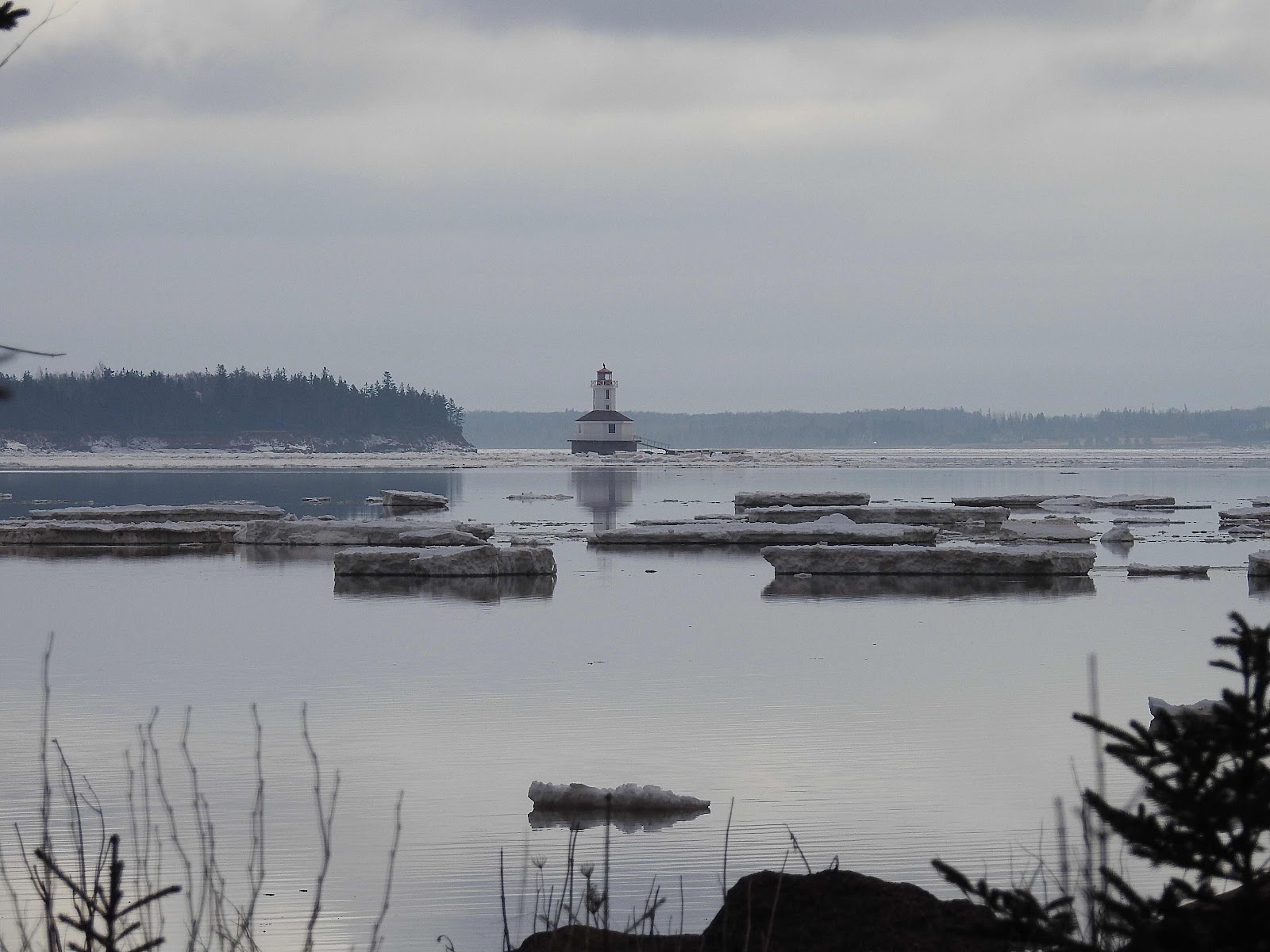 The hint of fog in the air, put the old lighthouse on call in case the fog crept into the bay.

Nearby, two American black ducks stood a silent vigil by the melted section of stream. Later, I saw them with seven friends, ready to join the party. 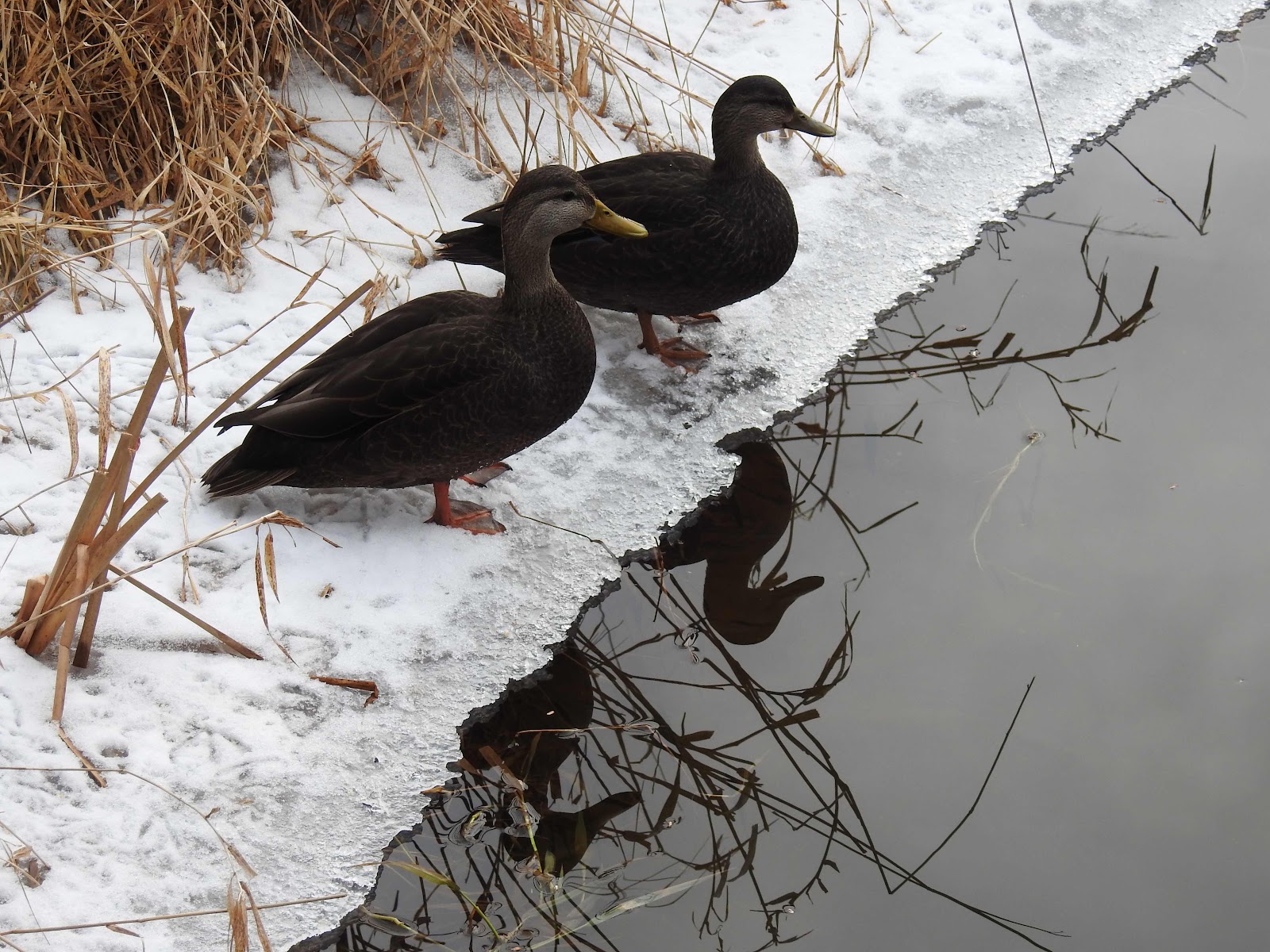 In the distance, the city looked on expectantly as the minutes to the New Year ticked by. No fire works this Year. Maybe for Canada Day in July? 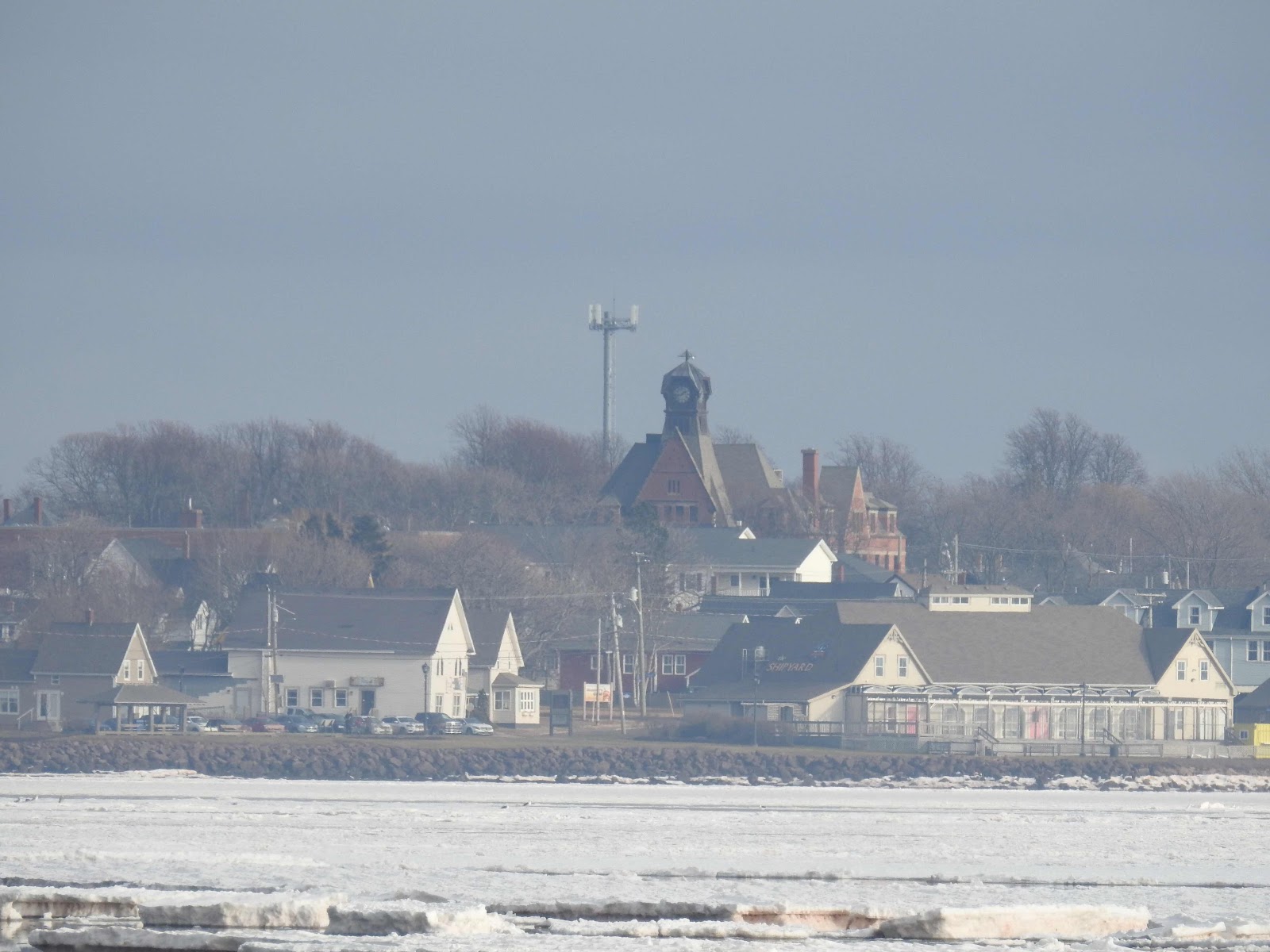 Oh, just the sounds on your video is music to my ears! And I must say I loved this party!

That's my kind of party! In fact it's the only party I'd feel comfortable attending at the moment. I hope to join a similar party on our N Norfolk coast in the next couple of days.

Wonderful party! Music to my ears!

What a wonderful, wonderful party to attend - as an onlooker. Thank you for sharing the joy.

They know how to party! And without hangovers, too.

Sounds like a fun party, love the ducks and the views of the bay and lighthouse. Take care, enjoy your day! Have a great new week!

Love the shot of the ducks with their reflection. Sadly the video will not play for me with our slow connection.
Have a great week and take care, Diane

My goodness, that was some party!
Love the foggy photos too.
Happy New Year Marie.
2022 will be a great year for all of us.
Sue

I could almost hear them through the pictures, loud gaggles of geese honking and partying hard! Great shots and I do hope you have a great new year, friend.

I hope that they're going to use the new 'silent' freworks.

We really do need some hope. We seem to always having another wave on the way before we're finished the last one.

More enjoyable guests than most partiers.

Way cool, both literally and figuratively.

A good time had by all?

I sure hope the seven ducks had a great time.
Coffee is on and stay safe

I think I might have been tempted to stay at that party and skip the human version!

Sounds like a happy ocean of fun!
Happy New Year!

You got some lovely photos.
Happy New Year.

That was one noisy party! No wonder the ducks wanted to join in :)

Just the best party! I wonder will the low temperatures and snow of this week, see them flying south?

that touch of fog is so pretty marie, and the 2 ducks could not look happier!!

our neighbors set off some fireworks, they were fun to watch!! i am very hopeful to!!

Like the contrast of the American black ducks against the snow.

These are great pictures! I normally don't like the fog, but you've managed to make it beautiful in these photos.

It rained here on New Year's Eve, so there were no fireworks around us either. Our dog is terrified of them, so we're always happy when people skip them.

-smile- And hope you had a lovely time, at your own party.

Marie,
Happy New Year. I enjoyed seeing the photos with the snow as I sit here in sunny Miami Beach. You are a wonderful story teller and brought that party alive. Thanks

Our Canada geese are the noisiest in the winter.

Those geese are certainly have a good time!

Burrrrrrrr, I'm cold just looking at your pictures and reading the description of the ice and snow. Bundle up. Happy to say my walk yesterday was warm and so no need to bundle up. I wore a t-top and a vest and part way through the walk took off my vest. Happy New Year

What beautiful photos! I found you by way of Anvil Cloud. Love meeting new bloggers.
Stay safe and warm. Oh, I love Canada geese, noisy or not.

many thanks for coming to see me!!

Great photos!
Have a wonderful weekend!

Beautiful photos from a nice walk! Let's hope for a lOVELY 2022...
Titti

Happy New Year Marie! Always wonderful to see the birds out and about. It has been a wild winter for us here, we have had so much snow. I hear that the island just got their first snowstorm. Hopeuflly you got enough to make it pretty :) Blessings to you for the New Year!

Hi Marie ... this does look like a crazy party... but your last post "A ducky New Year" is a classic. You simply HAVE to find a way to get your best blog entries into book form.

I miss their quiet quacks. Some days they are nowhere to be seen.
Amazing pictures as usual.

Hi Marie! Gorgeous photos and boy do they know how to party! Have a beautiful Sunday and a great week. :)

Out blog walking again and thought I'd pop back in to say hi. Hope you're doing well.

That church is really beautiful. Glad you understand how geese love to party.

What beautiful, atmospheric photos, and complementary text. I always enjoy your posts.

Gray, freezing days look good in pictures but I'm glad we don't have weather like that. On the other hand, if I had real winter clothes, I might enjoy the brisk air. Hahaha.