It couldn’t have been more perfect. We’d had rain which was needed for potatoes and other crops. Now the sun was out and the island breeze, which one can usually rely on, made the heat bearable. Don’t forget the sunscreen!

We packed a picnic and headed to the central north shore to meet Helen and Frank, our Australian friends who are visiting family on the island. Helen is a fellow blogger. They know Prince Edward Island pretty well, so we wanted to show them an area they hadn’t visited before. We met at the wharf at French River.

As we talked and watched boats return to port from their morning at the lobster traps, 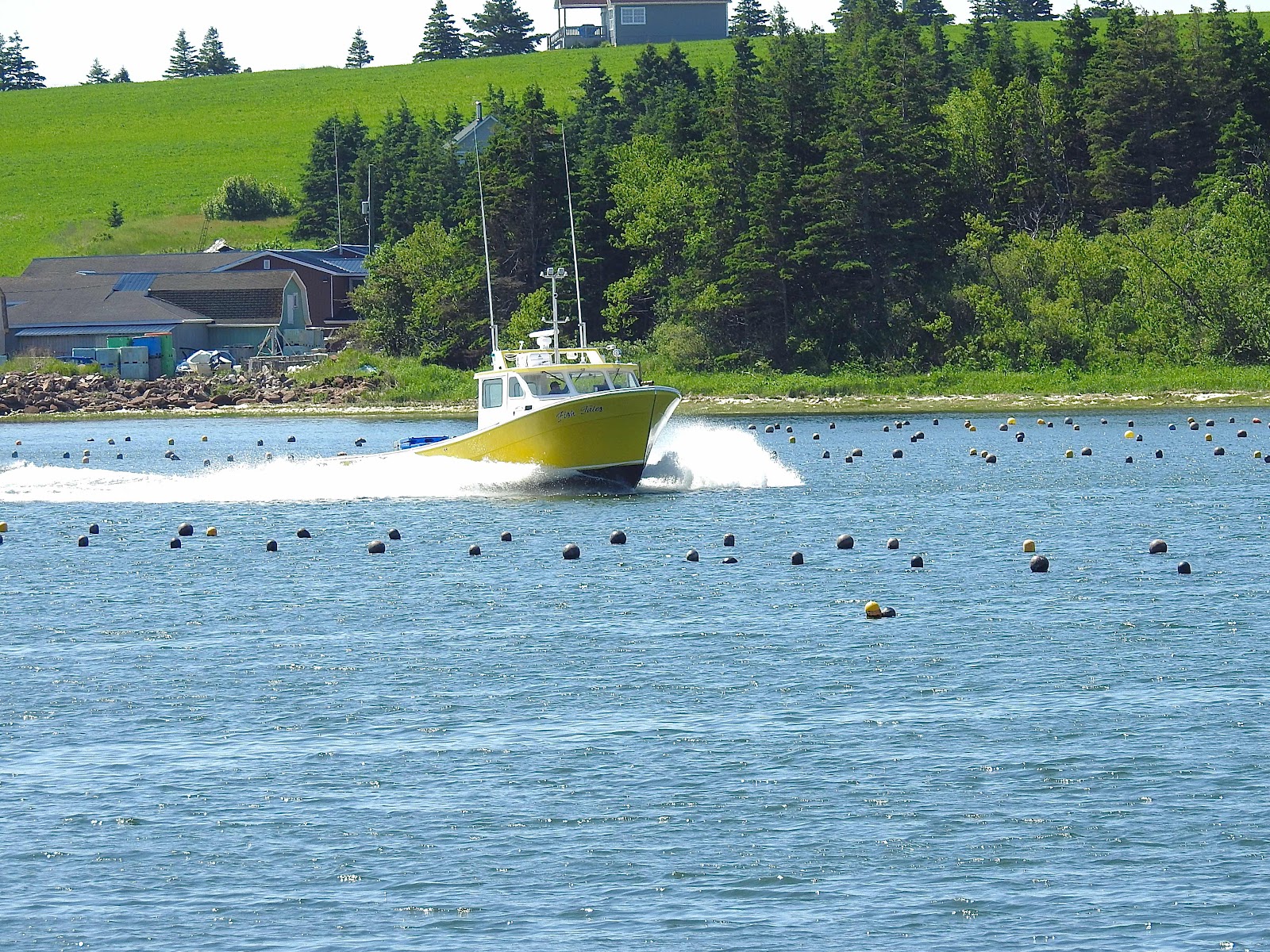 a local mussel fisherman came by and we talked briefly. He doesn’t have a long commute since the buoys are his workplace. 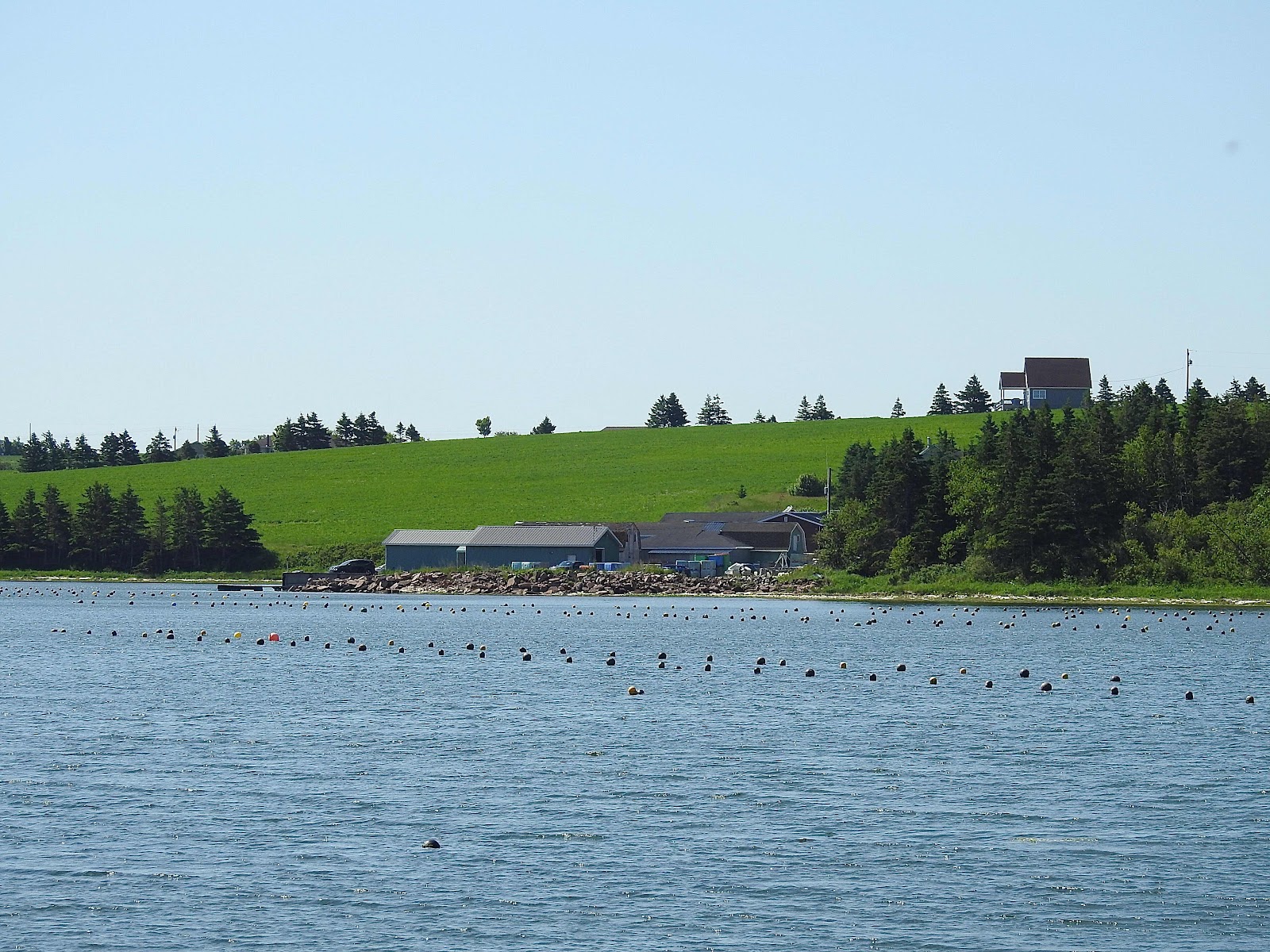 His family can watch from the living room window.

We proceeded to the New London Lighthouse at Yankee Hill where the view over the dunes is familiar. 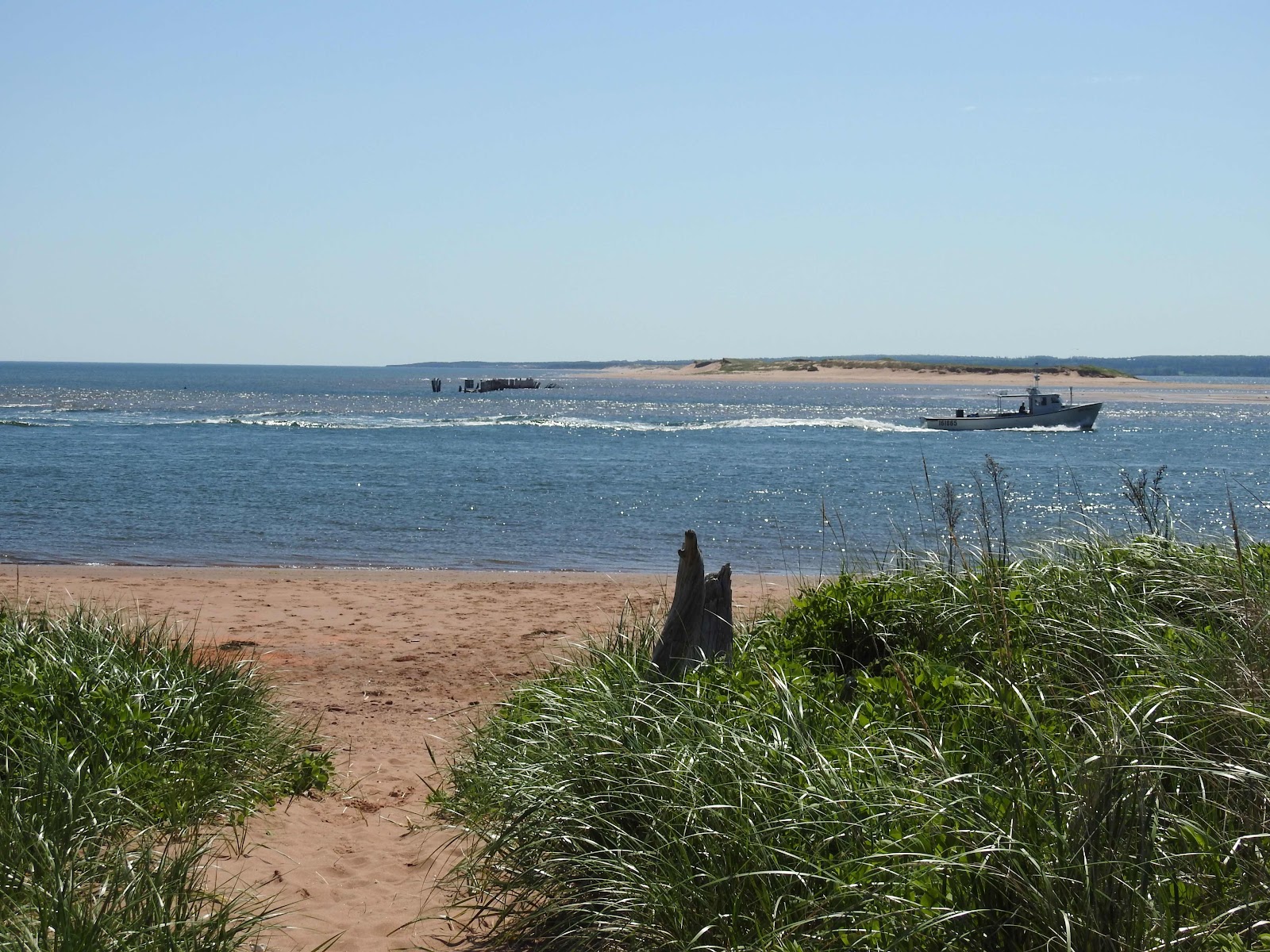 However, the lobster boats returning to port add the human element to this gorgeous setting.

Gulls and cormorants are usually busy in the area and many photos capture them flying by while the boats speed past. 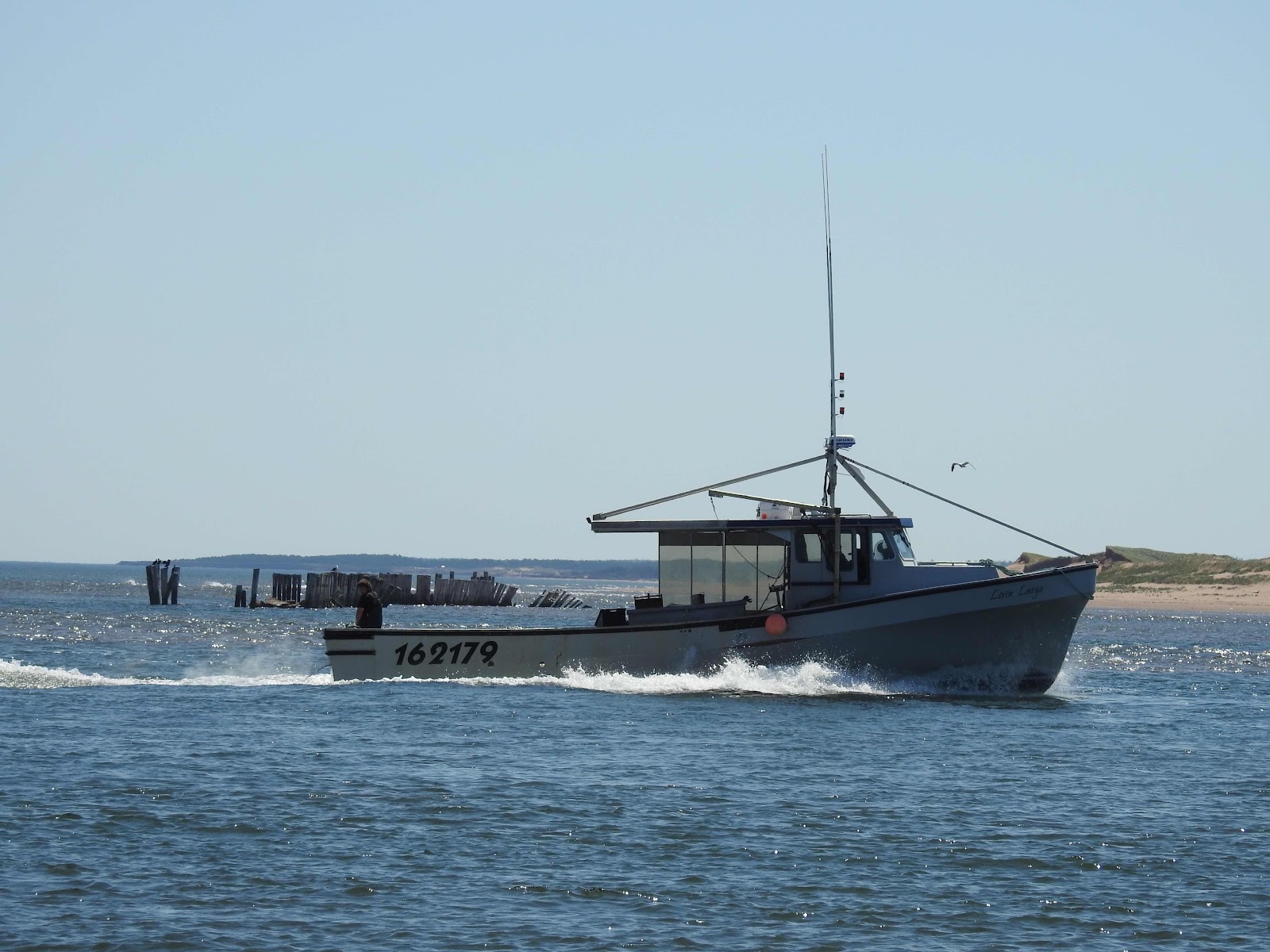 The Livin Large was one of a dozen or more boats making their way back to port while we walked the beach. Sometimes, like the Knot Inarush, they looked close enough to touch. 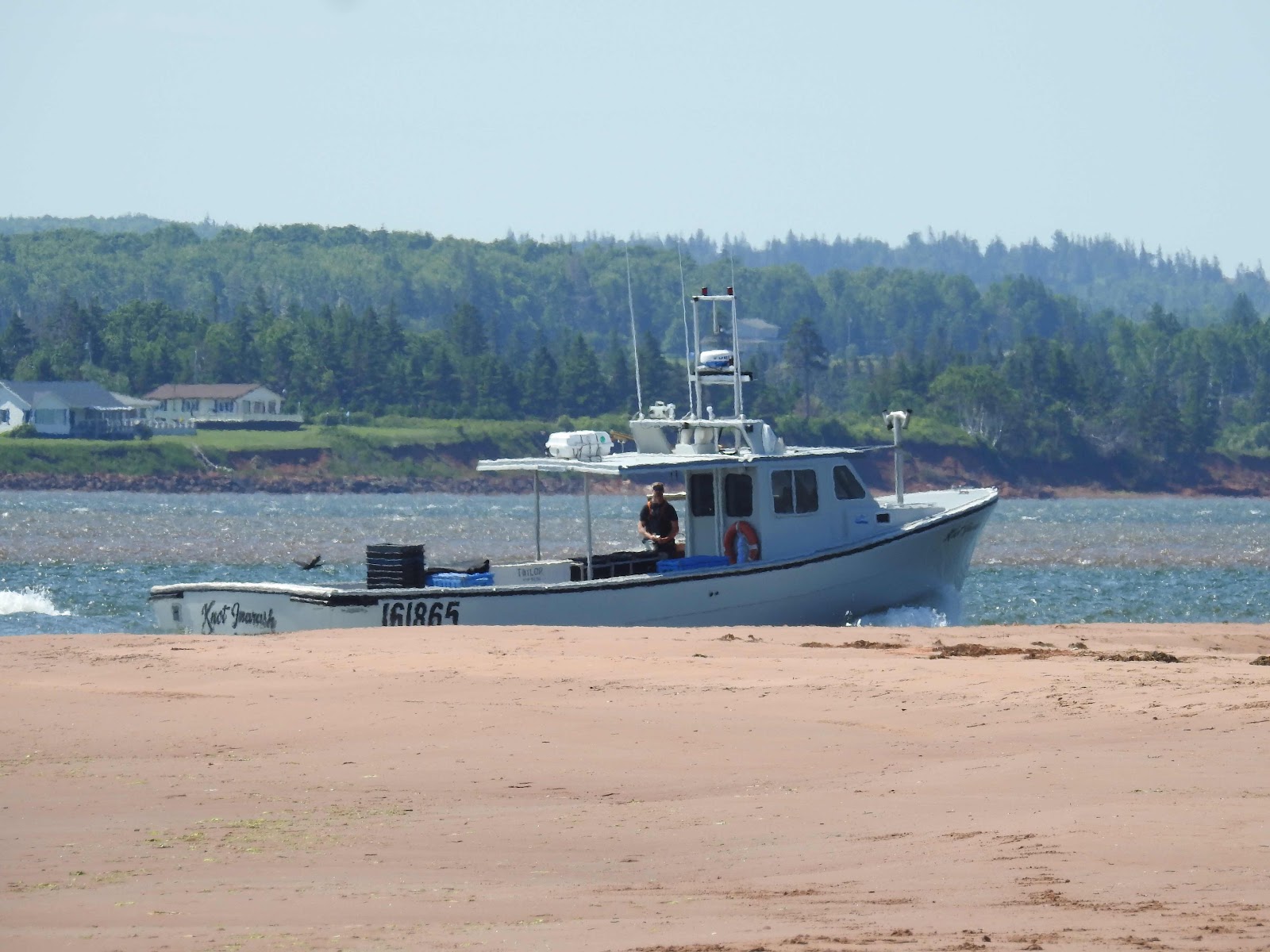 The pylons off-shore still stand against the onslaught of nature. They were certainly meant to last and the metal spikes which hold them together are visible today. 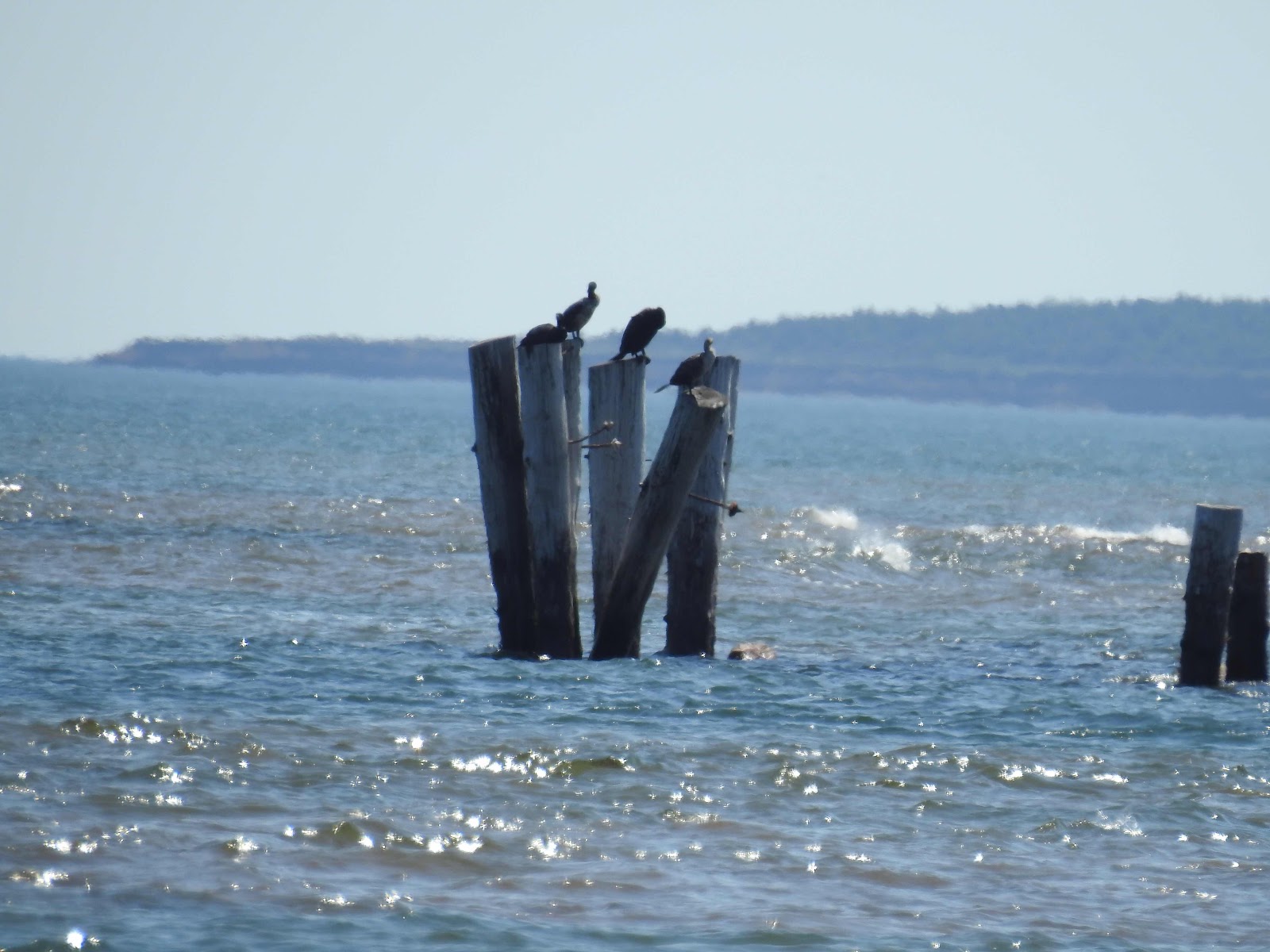 The birds use the area as a perch. 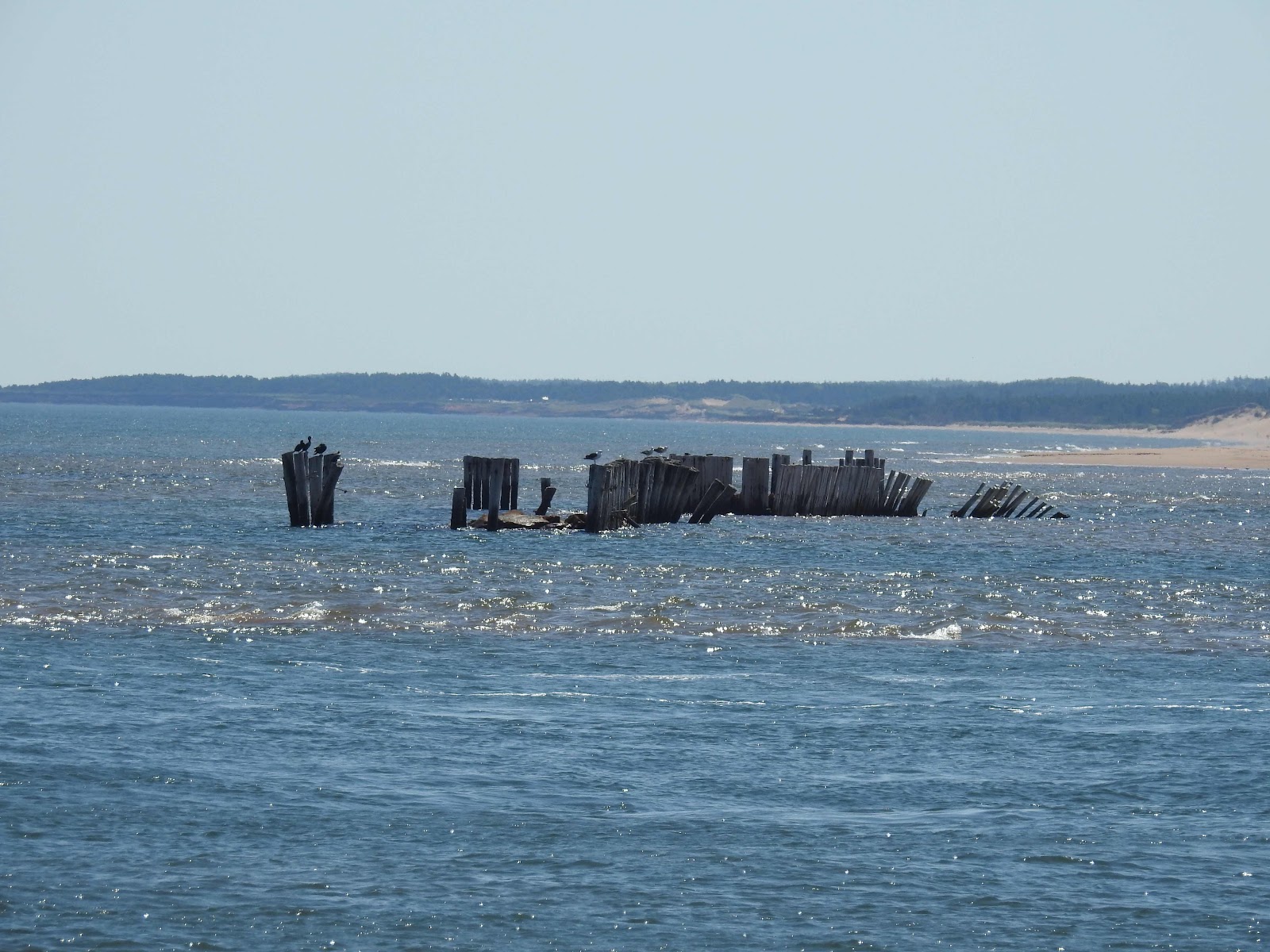 On the way back to the car, we met two artists sketching the old lighthouse. 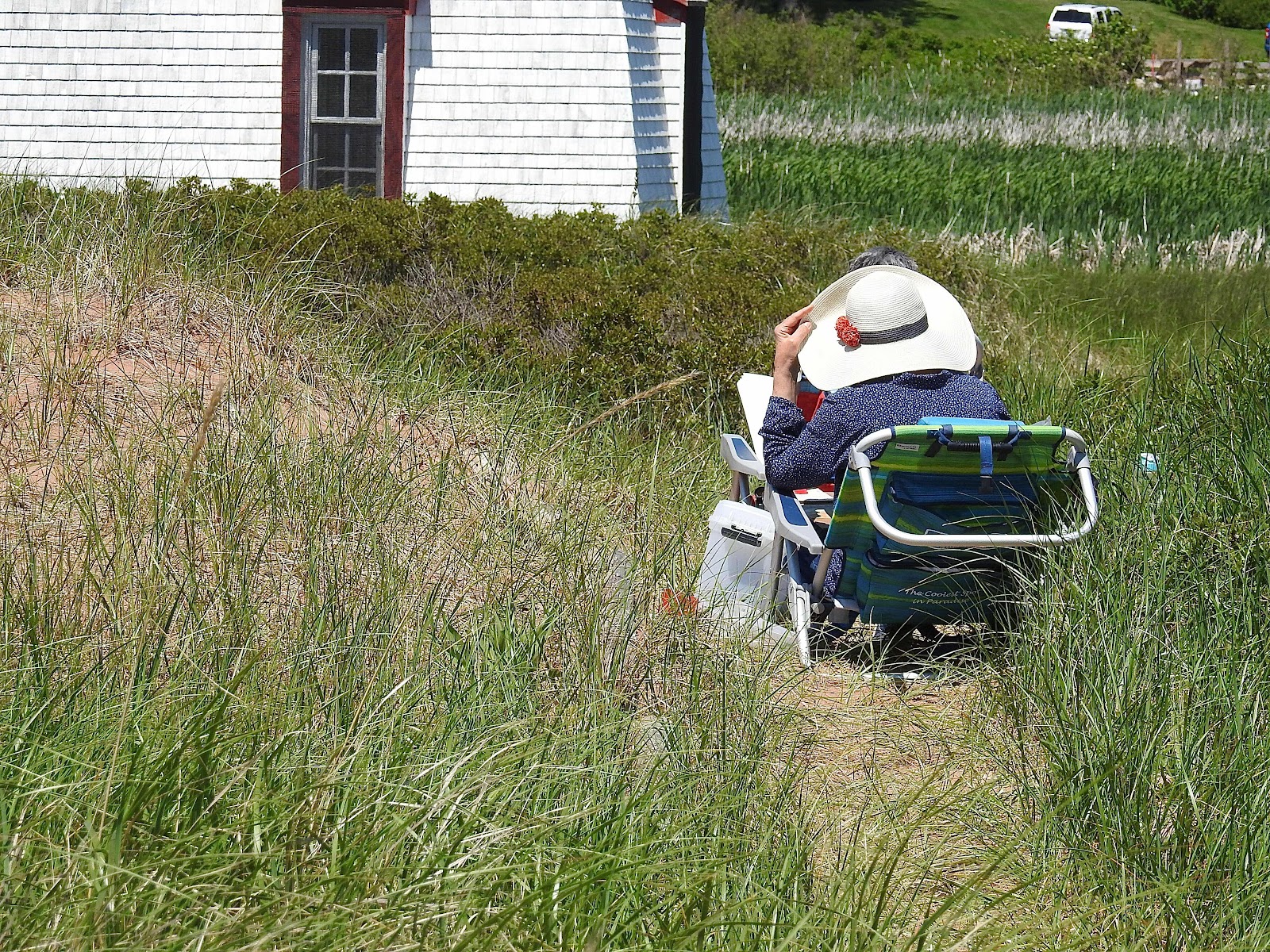 The view of the old sentinel was enhanced by the blooms which are bursting forth everywhere these days. 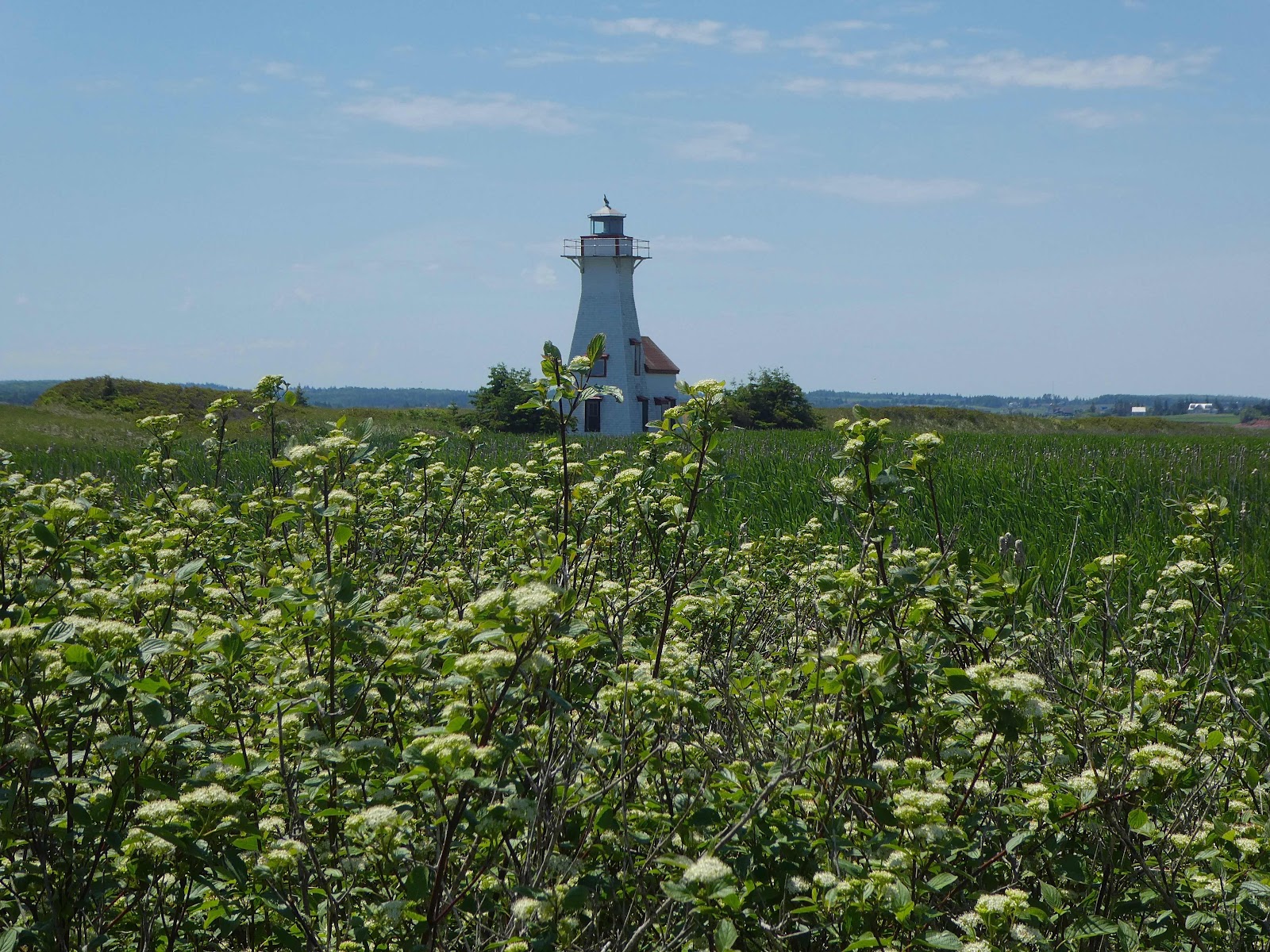 The north shore was in her glory!

I would love to have been there....just such a beautiful day.

Such a beautiful place you live! Every picture shows another view of your wonderful island. Thank you so much! :-)

Looks like a beautiful day to be out and about!

What a beautiful place you live in.. and such a gorgeous day for a picnic.

these are OUTSTANDING marie, i had so many favorites!! the first for sure and the artist sketching the old lighthouse, that setting is beautiful!!

What a lovely day! I really miss being near the water. My late husband was from New Jersey so every year we would go visit family and friends, enjoy fresh fish, and dip our toes in the water. Sigh. I love that some artists were sketching. Charming!

A perfect day and perfect company!
I love the quality of your images that the extra 'zoom' of your camera permits.
A fantastic first image and the one with the metal spikes on the pylons.

It looks like a perfect day - for everyone. Thank you.

What beautiful scenes from your beautiful island. Sightseeing is a great way to spend time with friends.

What a wonderful way to spend the day with good friends and a fantastic view. Your area is so inviting. Wish I could one day visit.
Sue

Here on the south shore of Lake Erie, it is called the north shore.

You've given a great description of the north shore and the fishing industry there.

Precious Marie island seems to burst out with beauty and hustle and bustle of life :)

How nice you met one of the fellow bloggers a unique joy indeed!
Dozens of boats floating on water are such delightful view to look certainly.
View from up lighthouse must be enchanting.
It is hard for an artist to resist the magic of nature during such lush season surely.
Hope all is fine health wise dear friend!
In my thoughts and prayers always

Both the pylons and lighthouse draw my eye.

I think you described it perfectly! Everything was in its glory! Beautiful photos of our outing.

Beautiful photographs! I wonder why the boats have such low sides at the stearn. I'd be afraid of falling out. :)

The low sides and stern make it easier to lift the lobster traps aboard and to handle them when setting them again. The traps can be quite heavy. That’s my thought on it after watching fishers pull and set traps.

The scenery is beautiful, the weather is fine and friends are visiting. What a wonderful day.

A picture perfect day at the North Shore, Marie. So much to enjoy.

Beautiful....sounds like you enjoyed your time. I love the looks of light houses but have never been to see one. I am heading out to California in July and I did put that on my bucket list of things to see. There is one there. Can't wait. Was not doing to take my professional camera but to get some really good pics, I think I must. lol

Oh, I could just see myself parked there, reading a book and enjoying all the sights and smells of the coast. You live in a very beautiful place.

Another wonderful post and, again, I felt like I was along with you as you snapped all the neat photos. One of my fascinations is with the names that humans put on marine vessels. Living Large and Knot Inarush get high marks from me! 😊 I just had to sit here a while and think about life in the first 2 photos. "... the buoys are his workplace." and "His family can watch from the living room window." Looks like perfection to me! 😊

What a perfect day for a picnic. :)