It was a day of lighthouses. We accompanied friends, Helen and her husband, Frank to Indian Head Lighthouse after a visit to the boardwalk in Summerside and lunch. The red dirt road which leads to the lighthouse had been recently graded but the going was rough. Arriving at the end of the road, one discovers the lighthouse at the tip of a long breakwater.

The city of Summerside on the other side of Bedeque Bay looks peaceful in the summer sun. 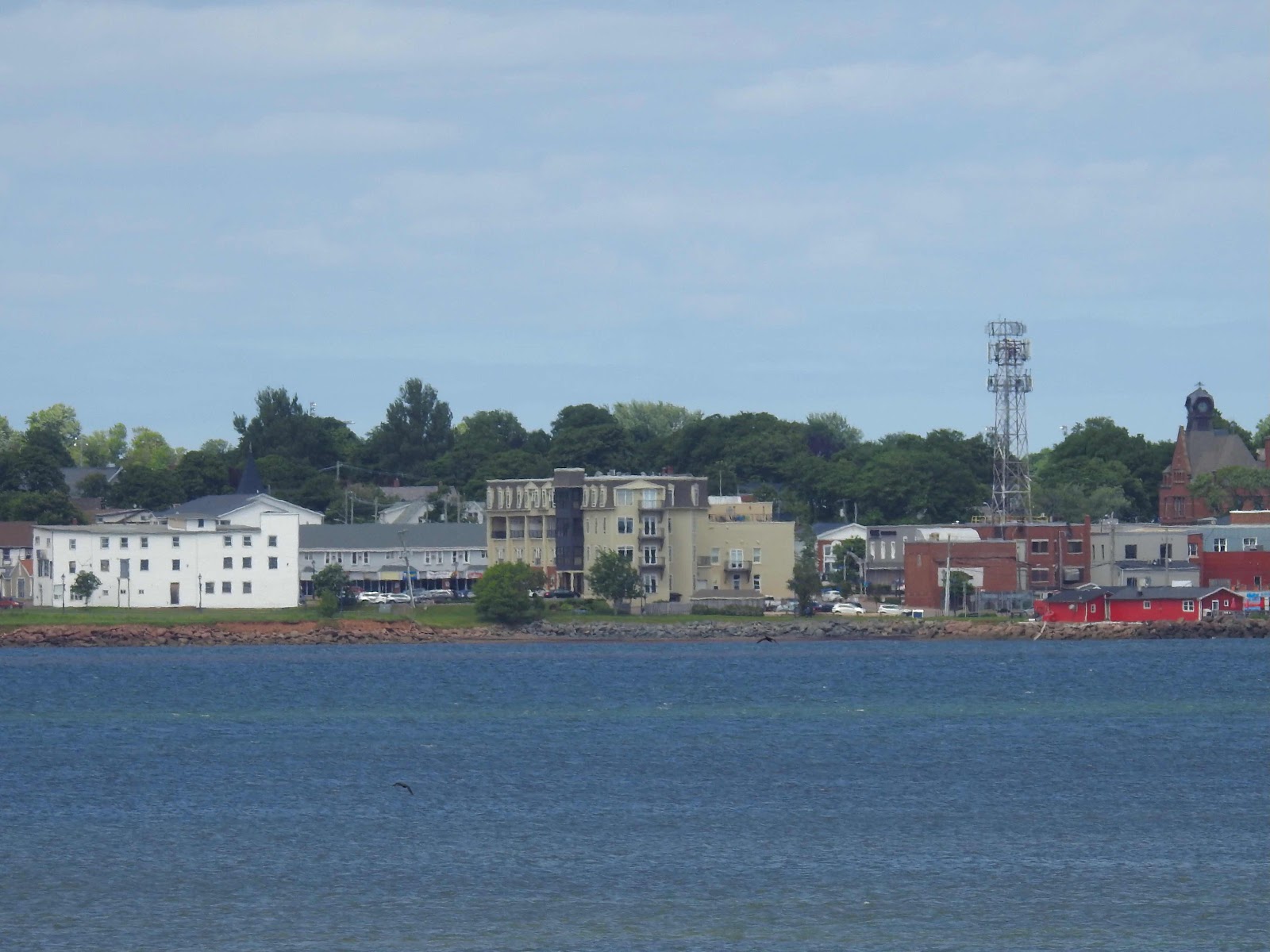 The Front Range and Rear Range lights are in place as they have been for decades, now but a reminder of the days before navigational systems guided entry to the bay. 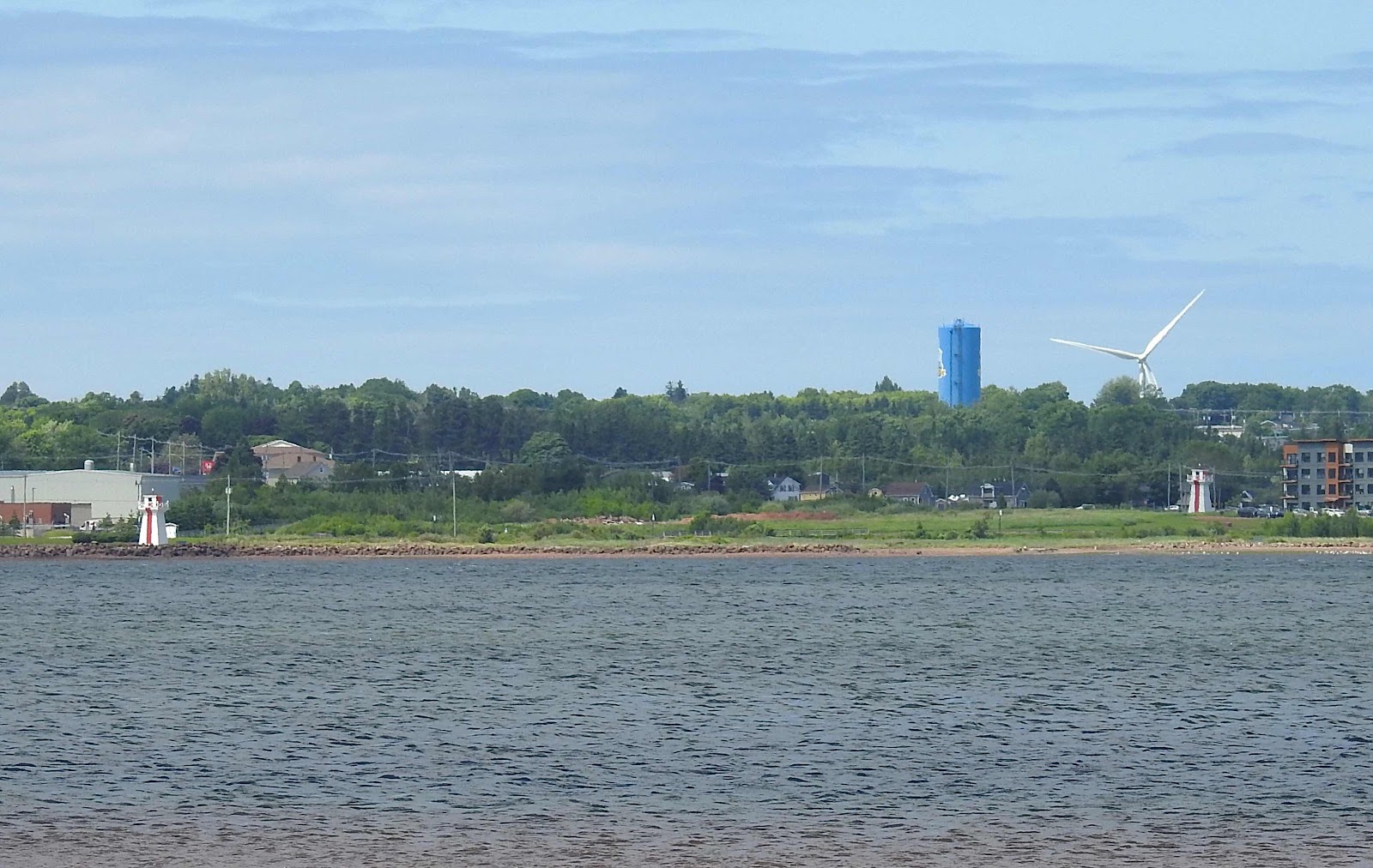 From the sea floor at low tide, one can get closer to the Indian Head Lighthouse. 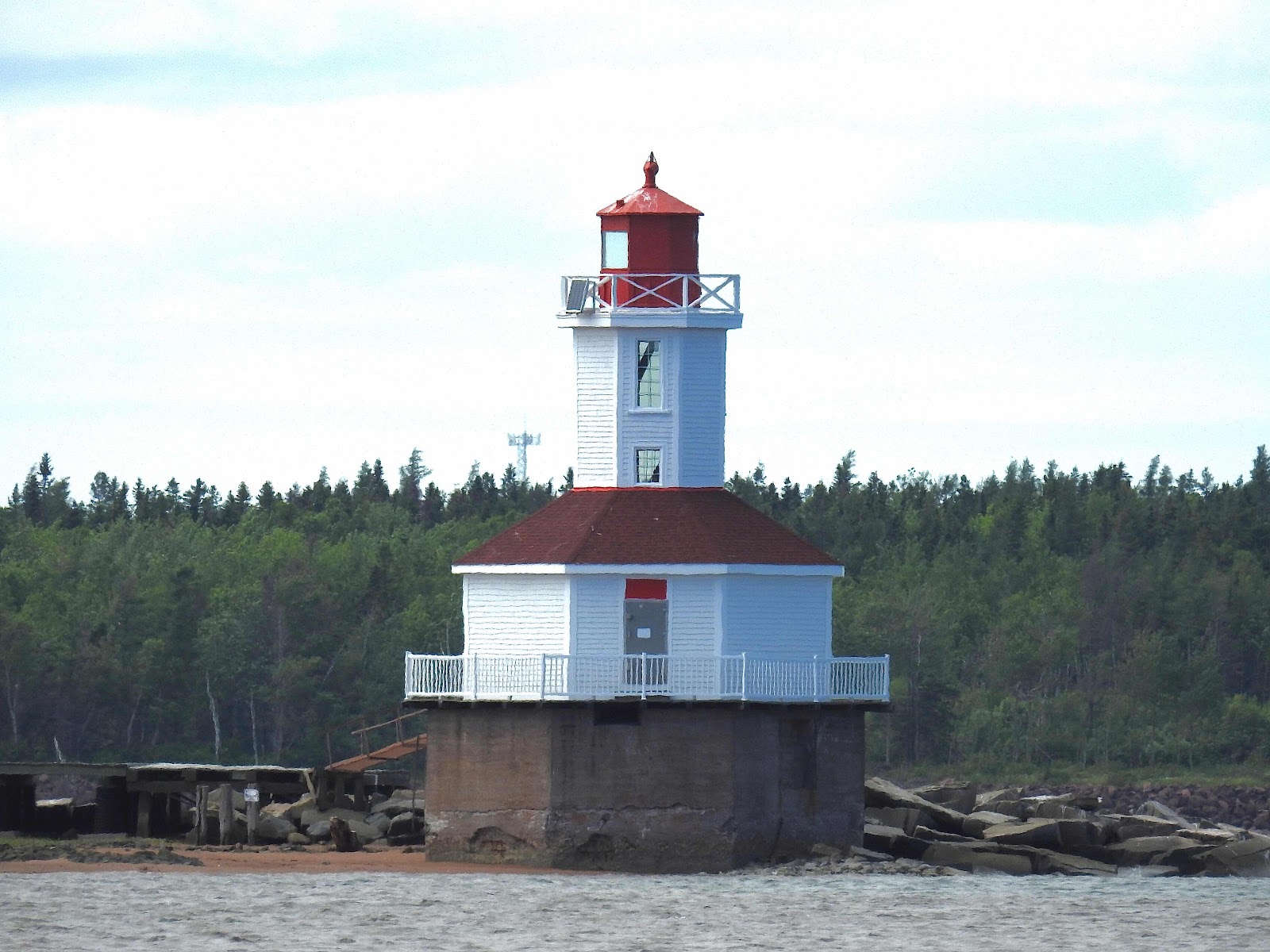 Some fishermen fish Striped Bass from the breakwater while feathered fishers watch nearby. 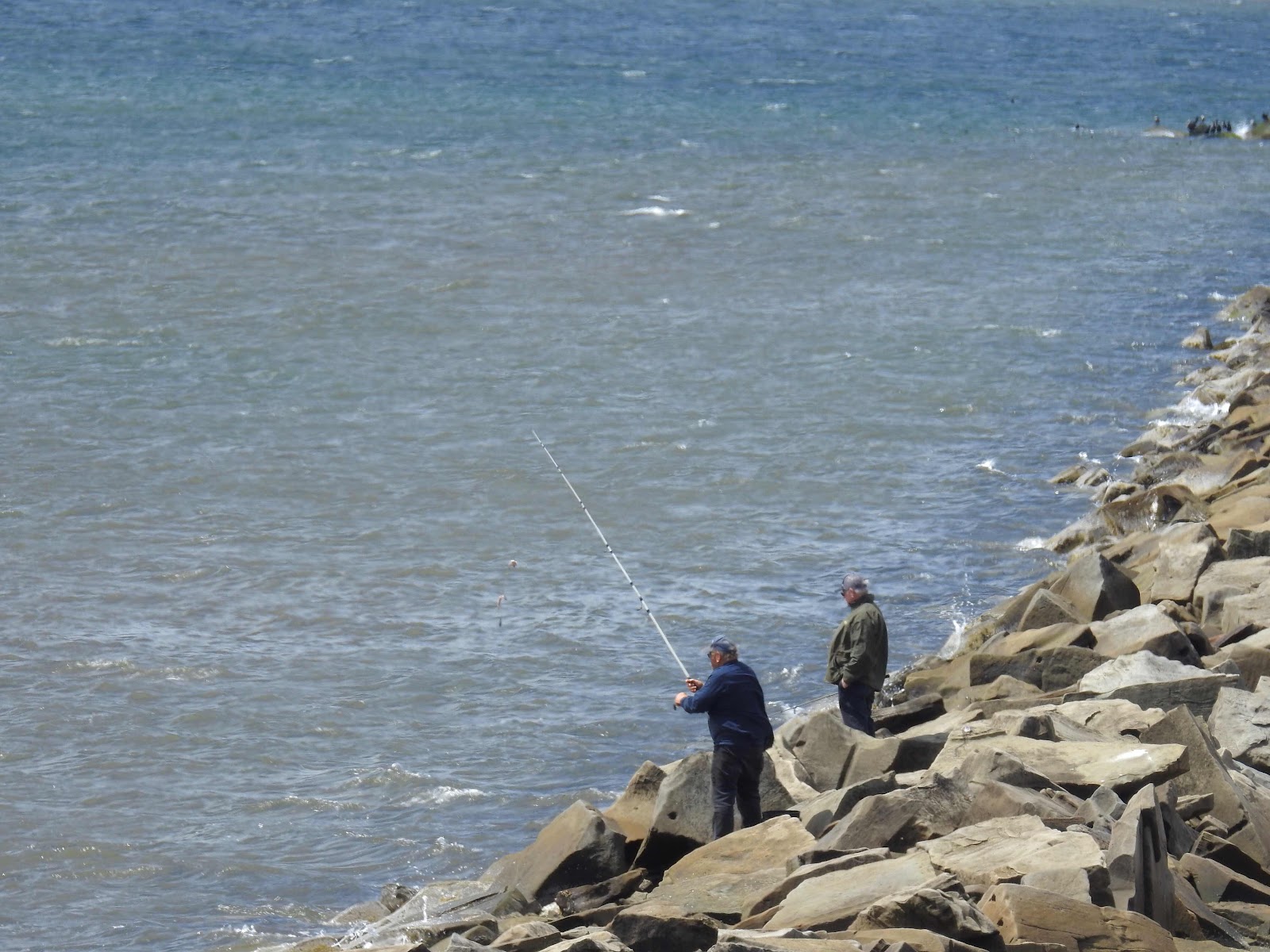 This Savannah Sparrow sang from the bushes. 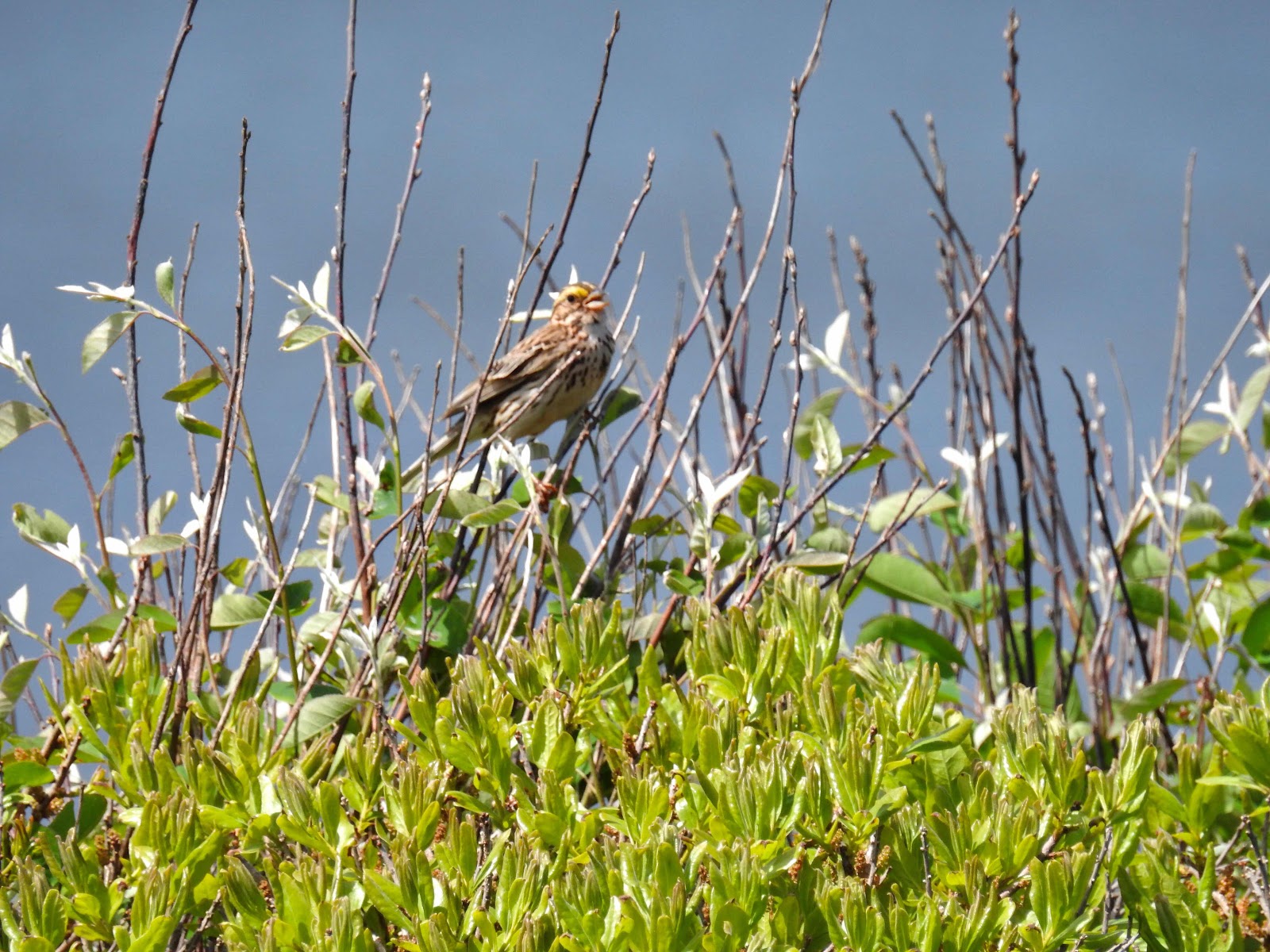 Erosion of the shoreline just inside the breakwater is dramatic, as trees drape themselves down over the cliff. 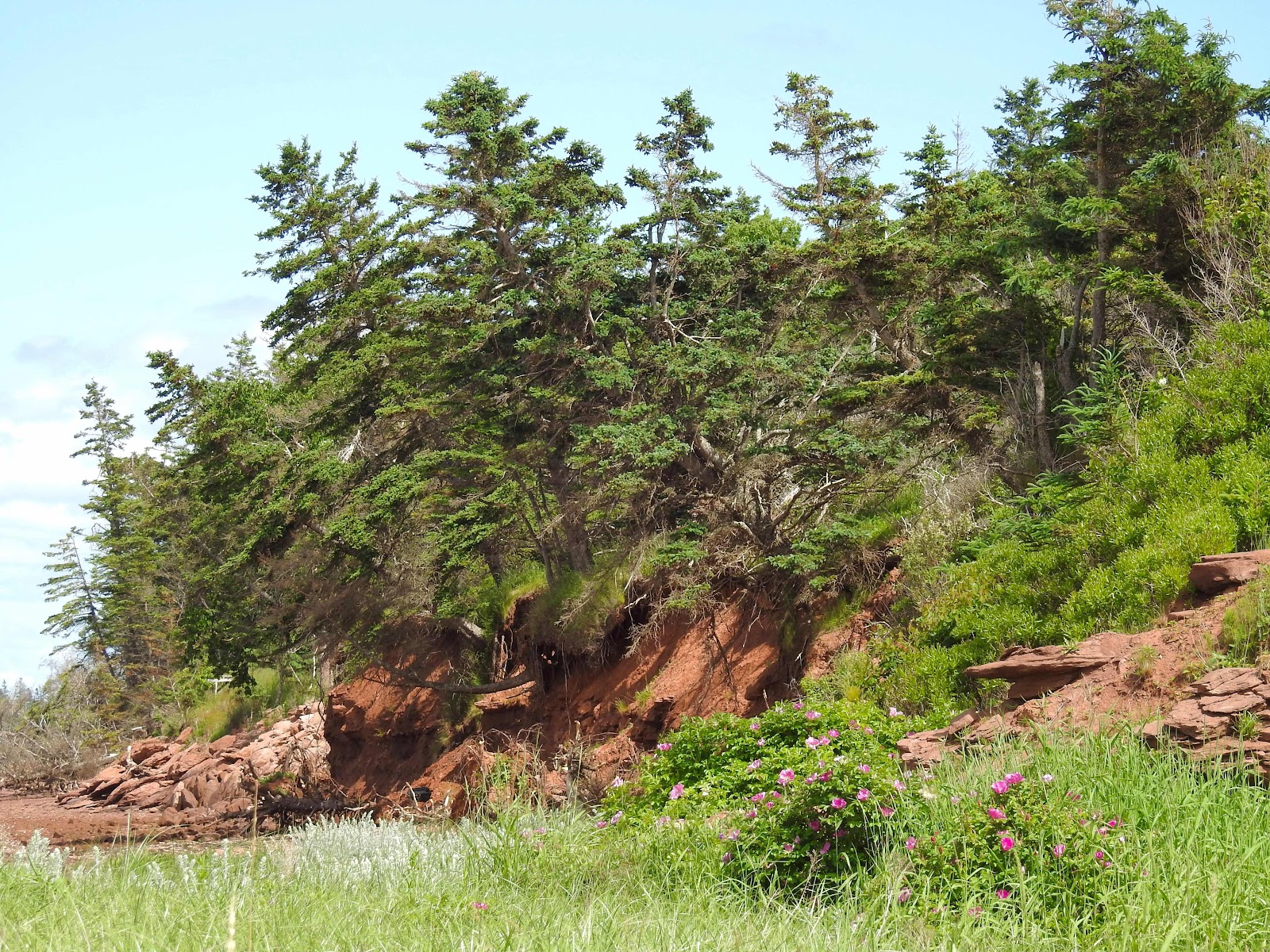 I sat on the breakwater and took photos of the sailboat out in the Northumberland Strait. When my husband downloaded the photos, it was a surprise to see the wind turbine in the far distance, one from a wind farm in New Brunswick. 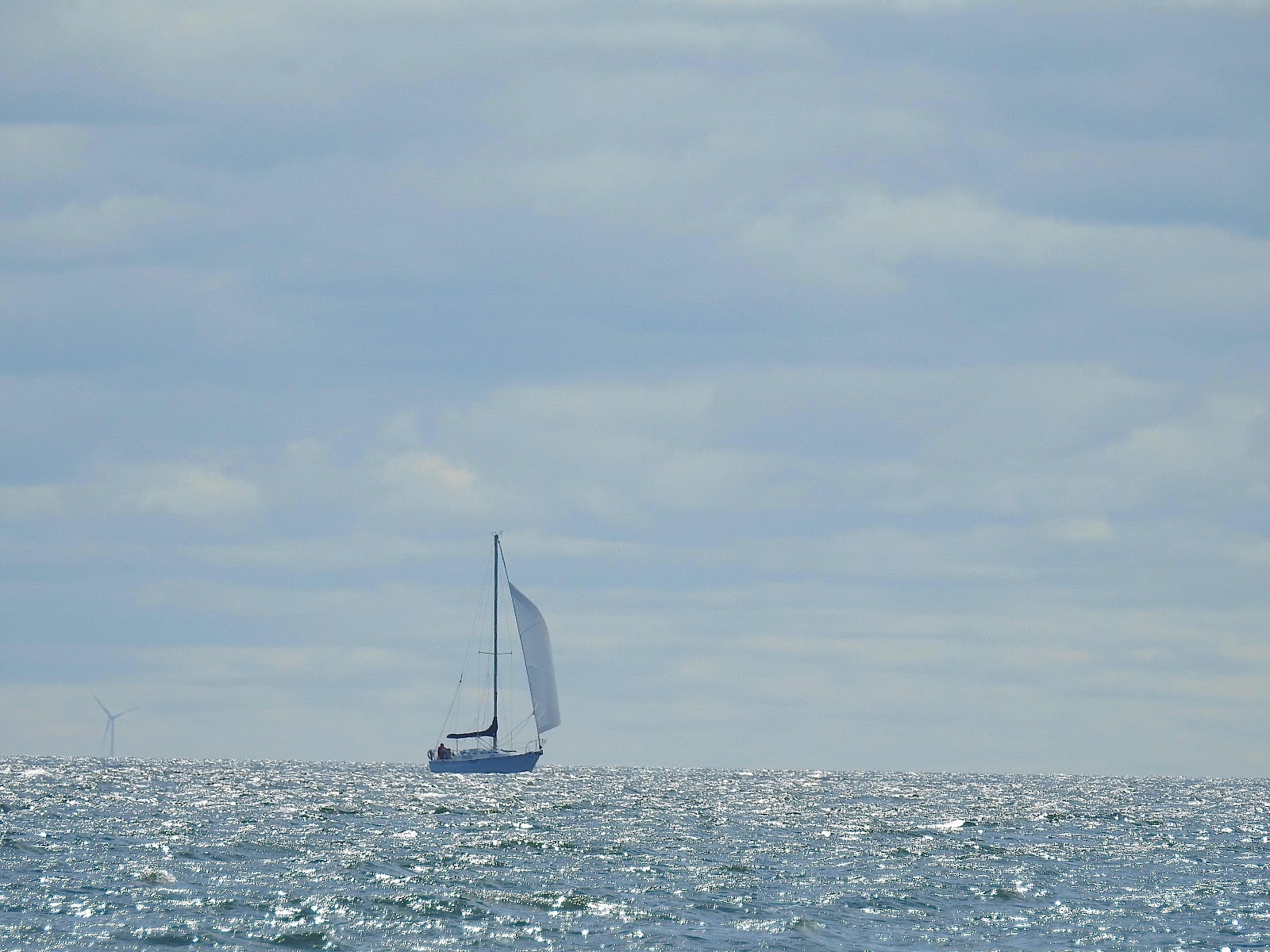 We drove on roads lined with lupins on our way to the Seacow Head Lighthouse at Fernwood. 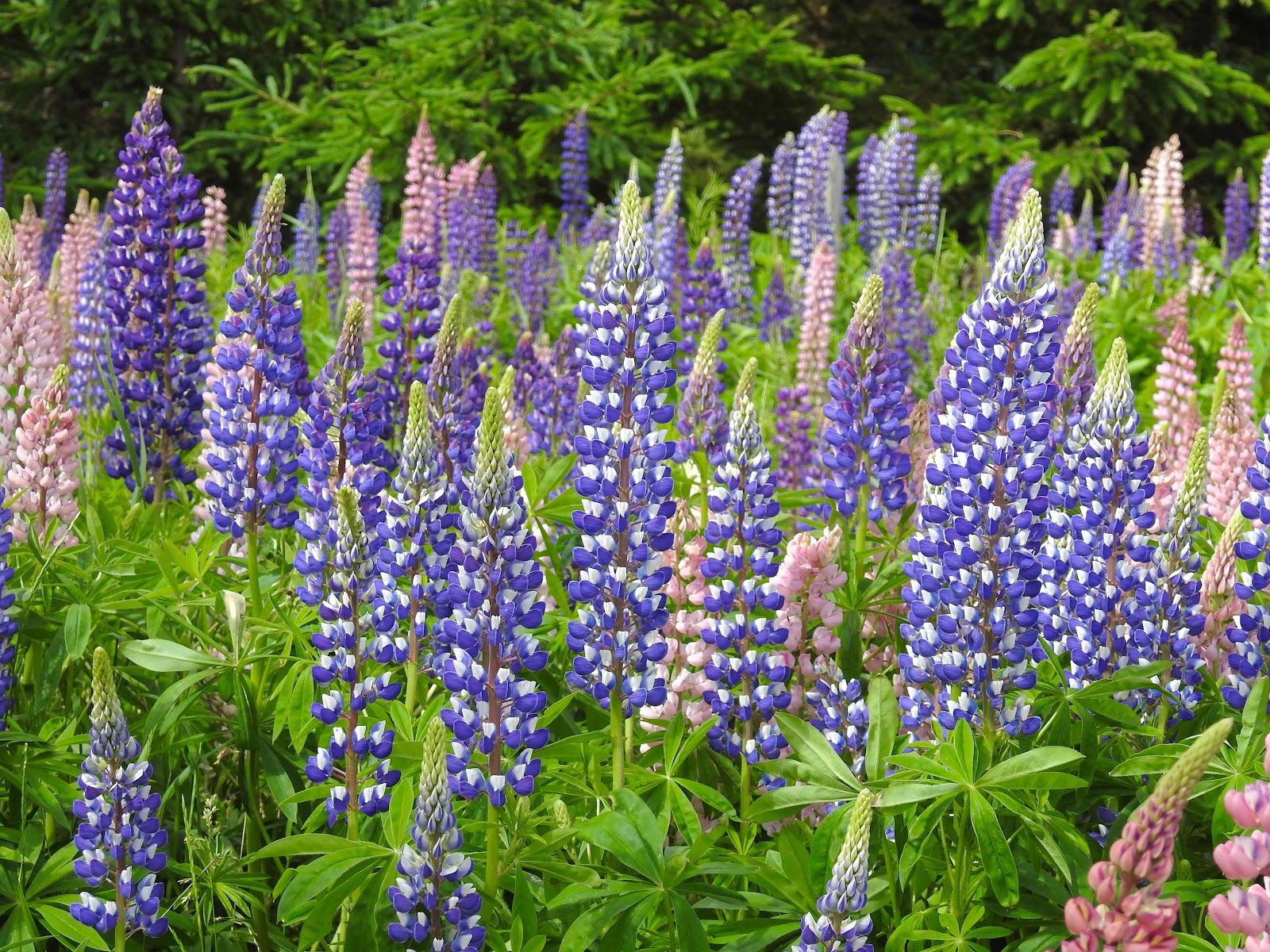 The area provides a view of the entire Confederation Bridge, which links Prince Edward Island to New Brunswick. 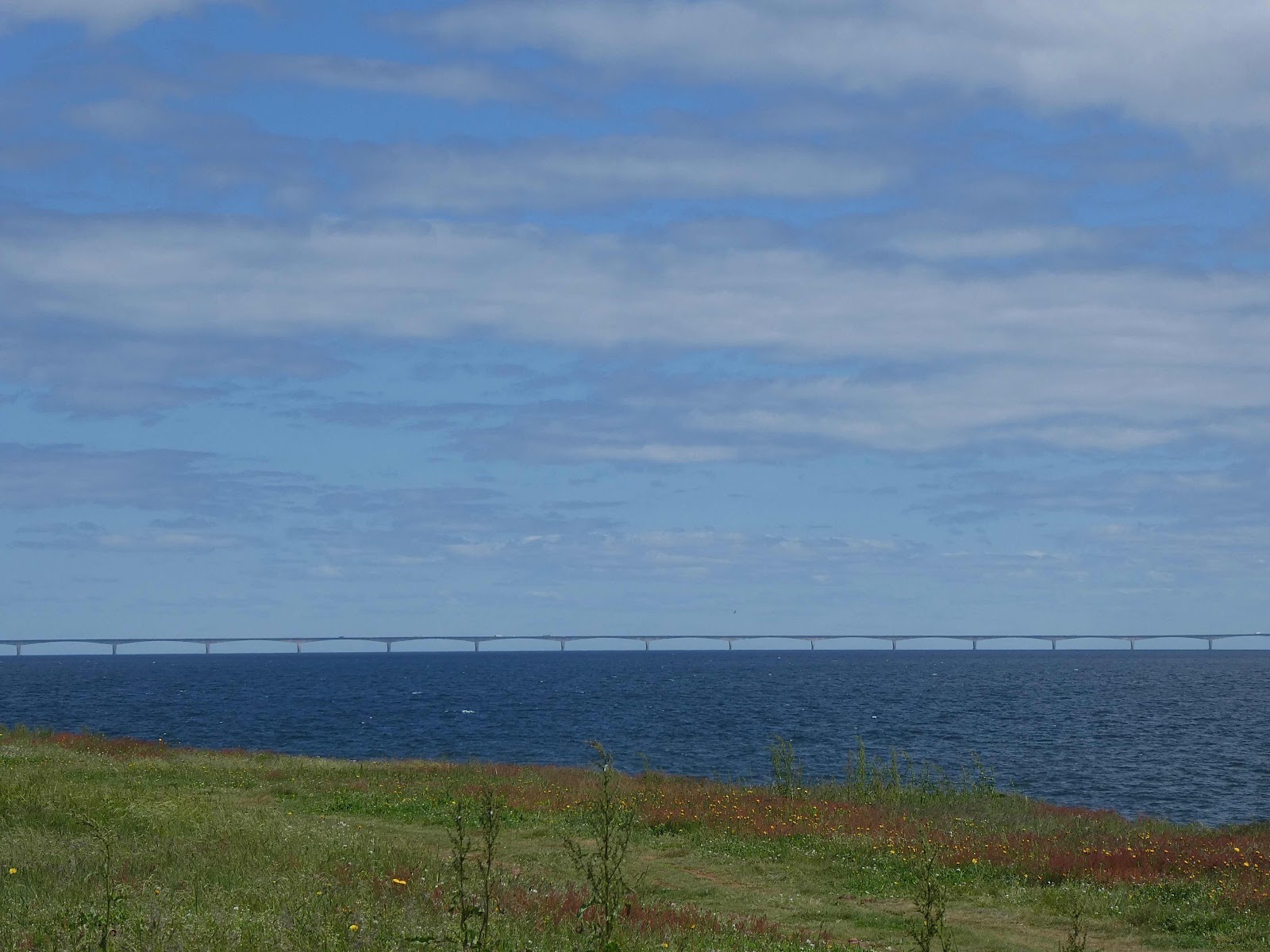 At the Head, the road disappears into the sea and nearby, waves work on the sandstone. 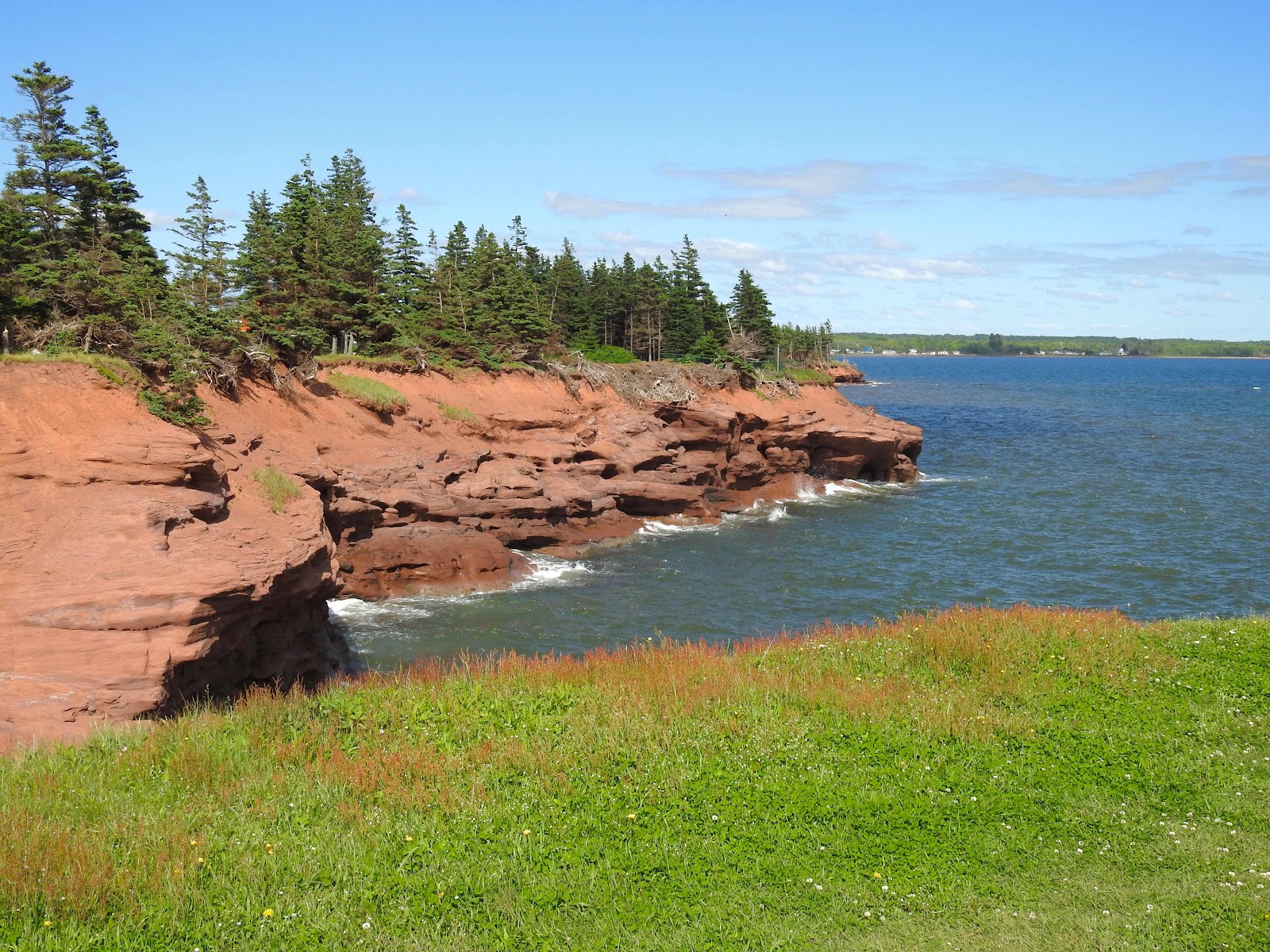 The lighthouse oversees the setting and withstands the elements well. 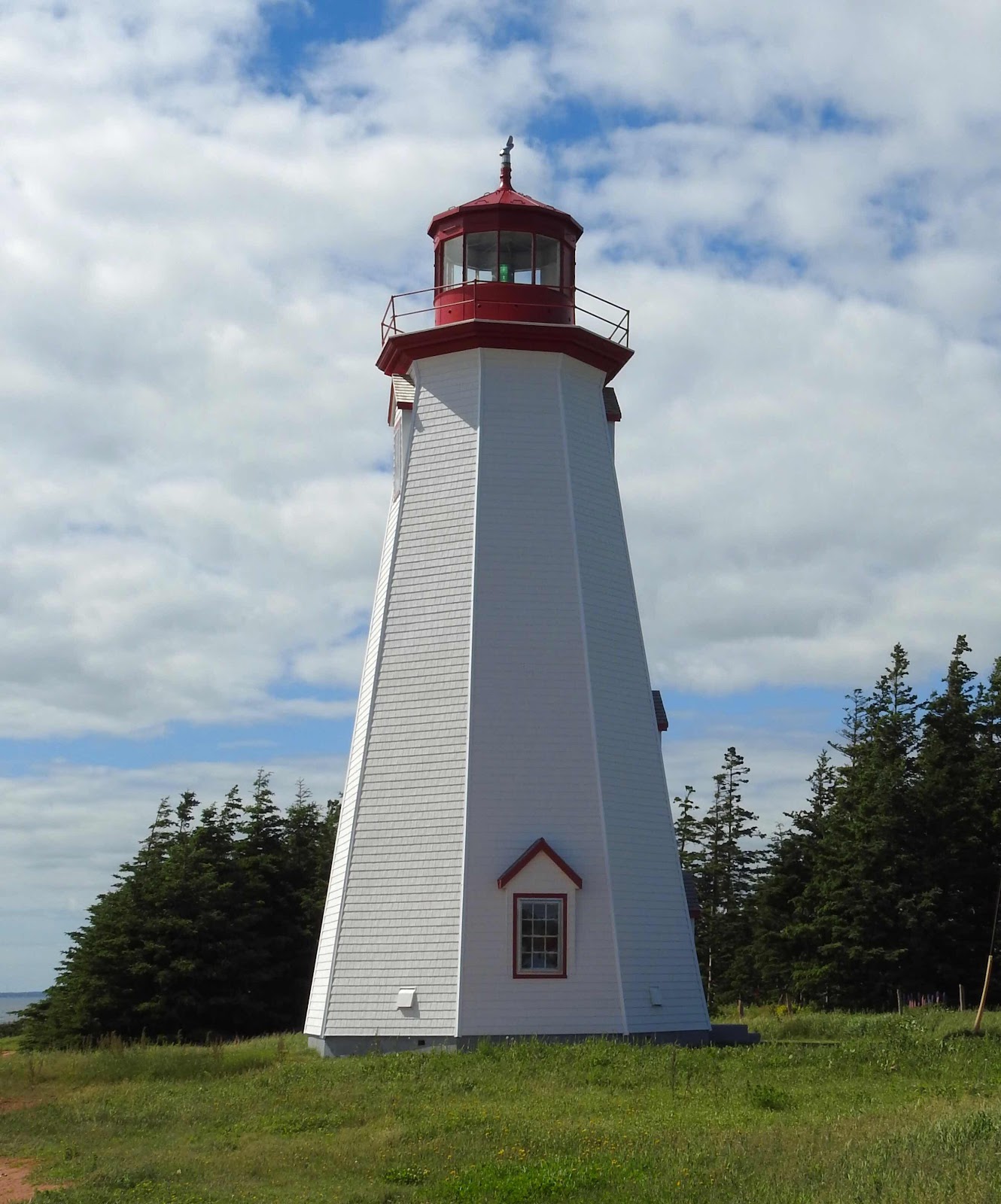 We bade farewell to our friends who are returning to Australia this week. Meeting fellow bloggers has been wonderful!

I'm sure your Australian blogging buddies are going home with many wonderful memories of PEI and your hospitality!

Hello,
What a lovely outing with your friends. Pretty views of the bay, I love both of the lighthouses, the bridge view and the sailboat photo. Cute capture of the Song Sparrow. The Lupines are beautiful! Take care, enjoy your day and the new week ahead.

What a wonderful, wonderful day. I hope that you enjoyed it as much as your visitors.

Fabulous pictures! I especially love that one of the lone boat on the shining water. You are a great photographer. :-)

Looks like you had a lovely time. Gorgeous scenery.

That lighthouse is stunning.

What a gorgeous day. Summer really has arrived.

One wonders how those fishermen got down over those rocks.

You gave your fellow bloggers a first class tour of P.E.I. we also got in on your tour showing the beauty of the Island.

Your photos are BEAUTIFUL! I wanted to jump right into them! Thank you for sharing.

Such stunning photos of your beautiful island. The erosion is quite dramatic, isn't it? When we are on our boat, we sometimes have to use range markers to navigate narrow passages. They are quite ingenious.

A completely wonderful day of lighthouses, friendship and all the special beauty of this island. Thank you Marie and Rick.

I have always loved lighthouses. Your photos of the lighthouse and the area are so beautiful!

That is one serious bridge!!

Love the lighthouses, the sailboat and the sparrow.

Very impressive bridge, it's so long. The lighthouses are beautiful. Wonderful photos, I enjoyed seeing them.

That wind turbine looks like it is just out in the middle of the ocean! Love all those lighthouses!

What a delightful time you had with dear blogging friends.
I love the lighthouses and I especially like the sailboat out on the sparkling water. Beautiful...
Your photos make me antsy for a road trip...with gasoline prices so very high, it won't be any time soon..boo...
Sue

It's so magical on your island. I can't stop admiring the lupins in your picture.

I love lighthouses and thanks for introducing us to your Australian friends. I am reading a book about the Aboriginies that live there. Very enlightening.

What a wonderful treat for your Australian friends to have your guidance on the places to visit!
I remember driving across the Confederation bridge. My friend K drove back as we both wanted to have the experience.
And like margi - I love the lupins!

What a wonderful day trip you made here. I love zooming in on photos and looking at the background - you never know what you are going to find lurking there!

I am sure that your visitors enjoyed their time with you.

Seeing the bridge reminds me of the cost to get off the island. Surely, it is different for residents?

The bridge fee is $47.75 now and islanders are charged the same as visitors. That bridge is an expensive part of the TCH. There aren’t enough islanders to apply political pressure to get a price reduction. Then again, the Newfoundland ferries, their TCH is way more expensive.

I´m a big fan of Lighthouses...your pictures are fantastic and the nature is fantastic too!
Titti

What a lovely tour you provided for your blogging friends! So much of it reminds me of the southern shore of The Strait ... our cottage shoreline. We even have a lighthouse near. Your photos are absolutely stunning and I'm always impressed that you know the names of all the birds you post!

A visit that your friends will never forget.

it was well worth the bumpy ride, such a beautiful place!! you are a great tour guide for all of these new friends!!

the lupins are gorgeous!!

What else can I say...just gorgeous! Every single photo makes me completely jealous that such lovely lighthouses, sailboats, and glistening water isn't close by! Mary

Yes, Your Ausie blogger friends are taking home some wonderful memories of their visit.

The soil erosion is incredible. You would think the weight of the trees would pull the full root ball and tree over. I am sure there must be some lighthouses along the Texas coast but I've never seen one. I'll have to research that.

Hi Marie, As I scrolled through this post, I noticed I was saying, to myself … Great shot! … on every single photo. 😊 We are so lucky to have you sharing PEI’s beauty with us. Lighthouses are one of my favorite photo subjects. The lupines are gorgeous. The sailboat is a neat capture. Perhaps the photo I can’t stop looking at is #6, the shoreline just inside the breakwater. What a story those trees must have! Your photo immediately reminded me of the Tree of Life out here on the West Coast near the Kalaloch Campground. Here is a link that will show you a photo …

How trees can live along the coast with this kind of erosion just amazes me. I noted that you mentioned the Australians are heading home. I will have to say those folks are so lucky to be able to spend part of their winter on PEI … and even more lucky to have found you to show them the highlights. Have a good weekend and take care. John