When my husband and I arrive at the boardwalk, by bike or car, we never know what awaits us any particular day. While we can know the weather forecast, including wind speed and direction, what cloud cover to expect and the tidal conditions, we can never predict what animals we’ll see. 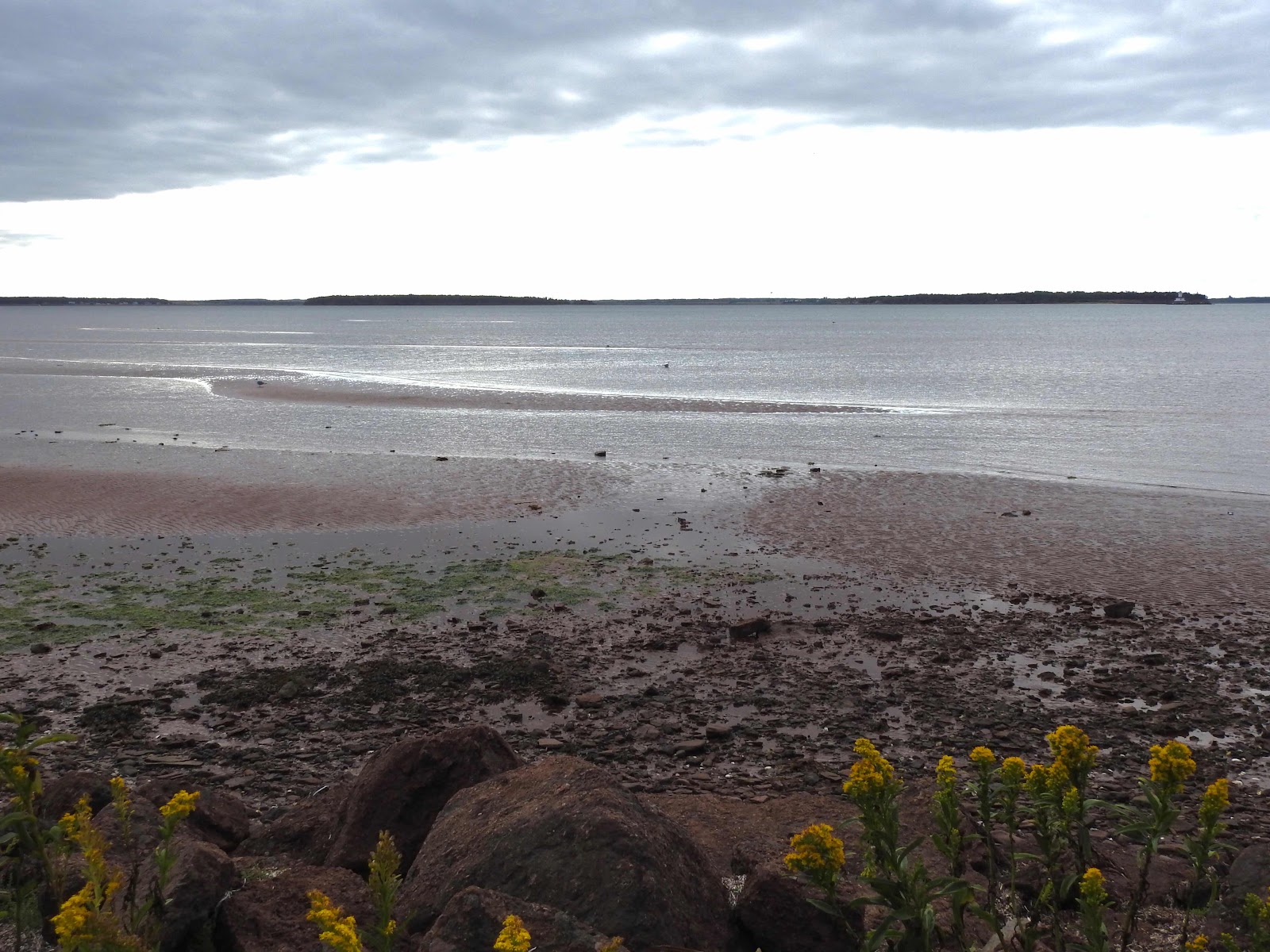 Such was the case when we arrived at the boardwalk recently. A Herring Gull, a common sight and sound in the area makes us feel at home by the bay. 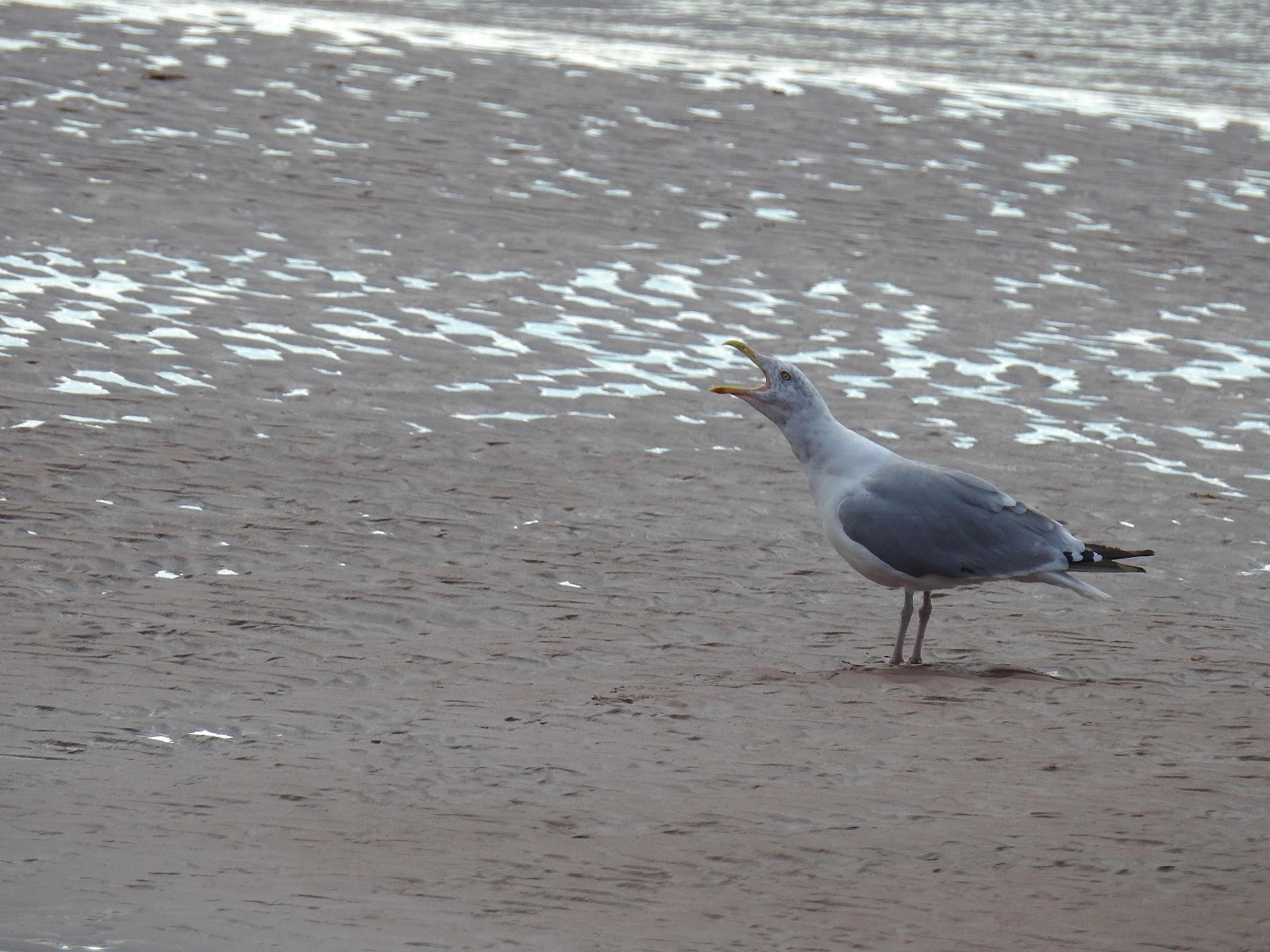 Its plaintive cry is louder than a chorus of tiny Bonaparte’s Gulls, who make a croak-like sound when they are calling. 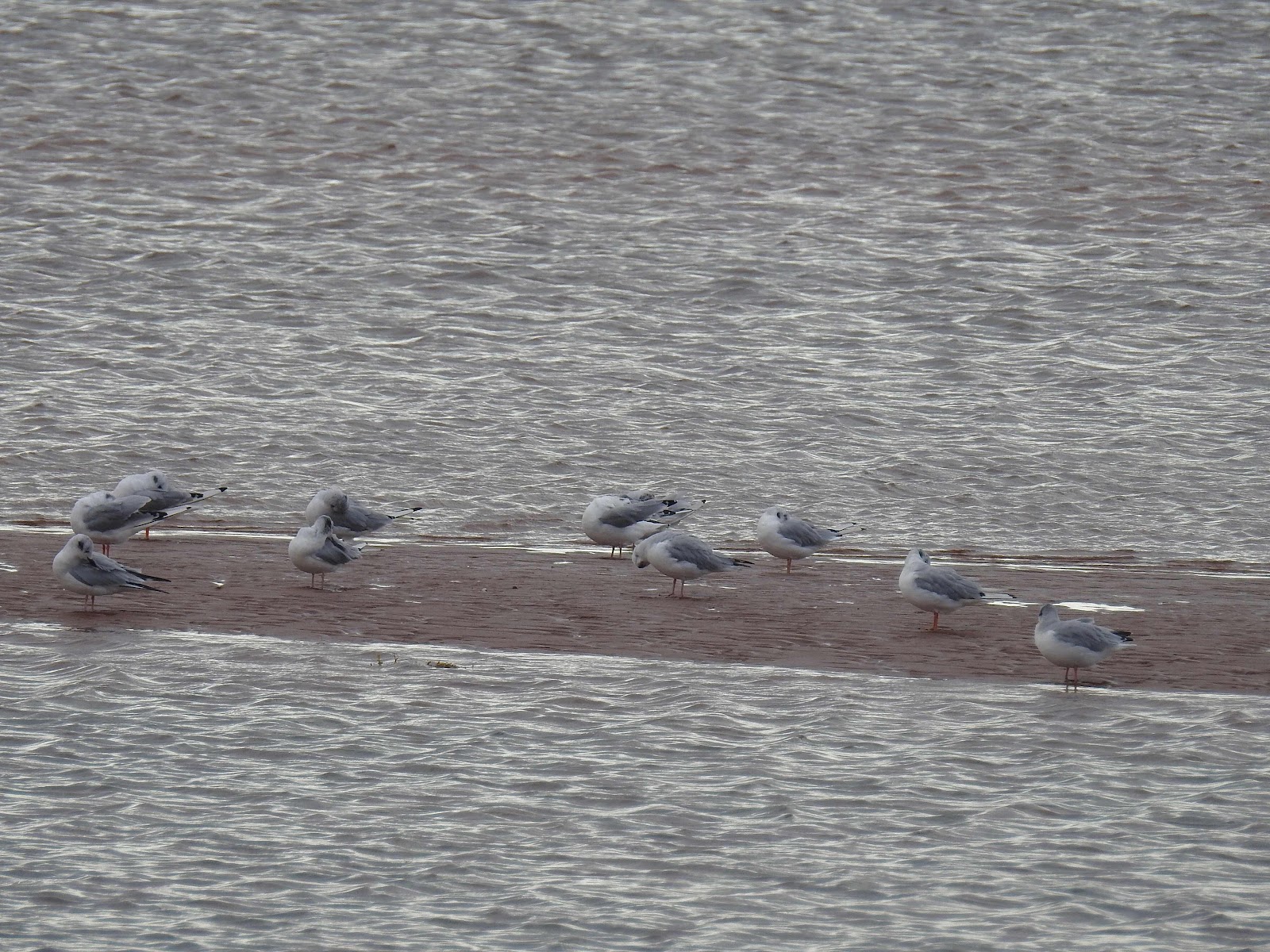 Nearby a Greater Yellowlegs fed among the tidal pools created by the falling tide. 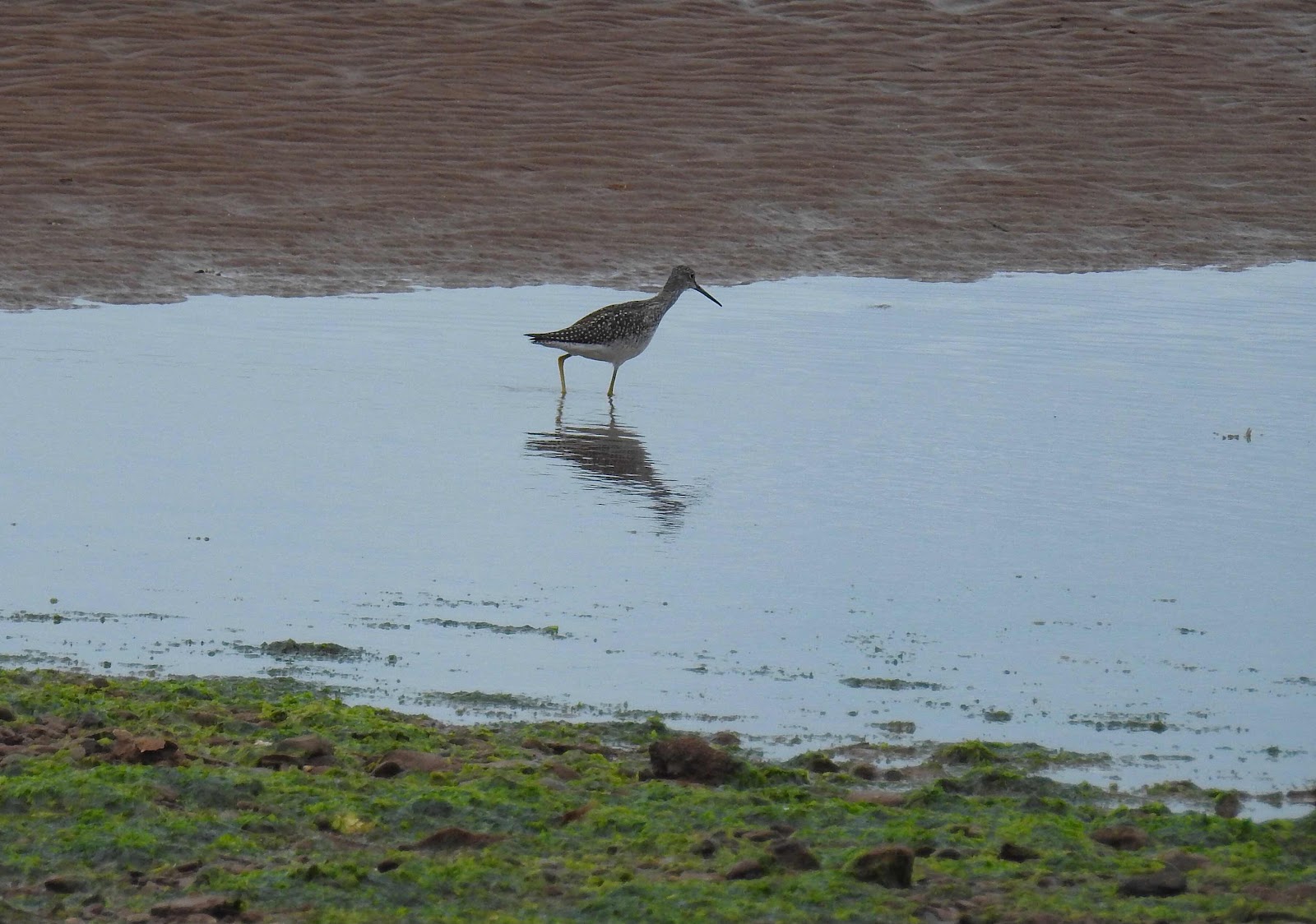 Three Semipalmated Plovers were well hidden among the exposed rocks. 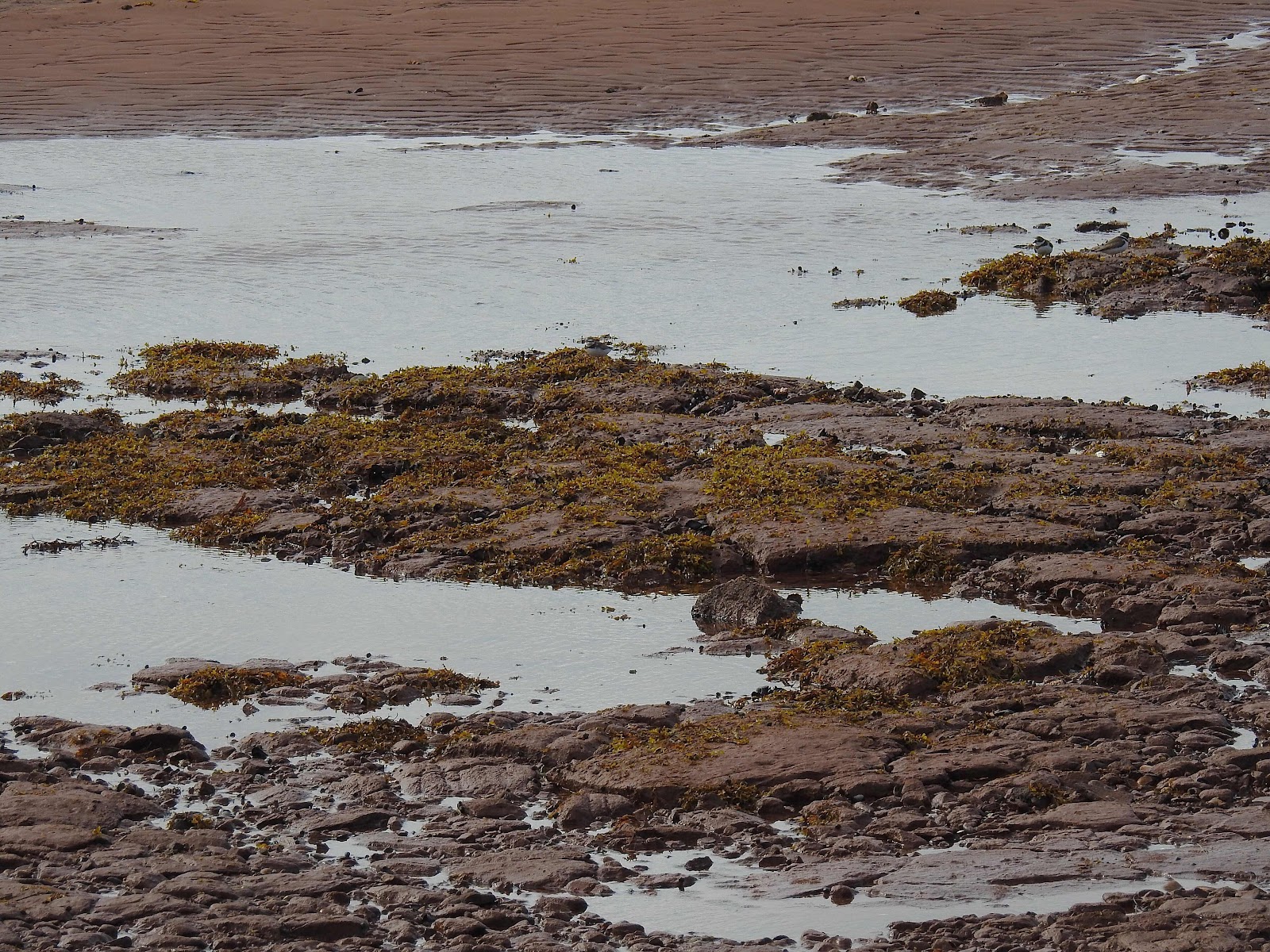 A Mourning Dove watched from a nearby tree 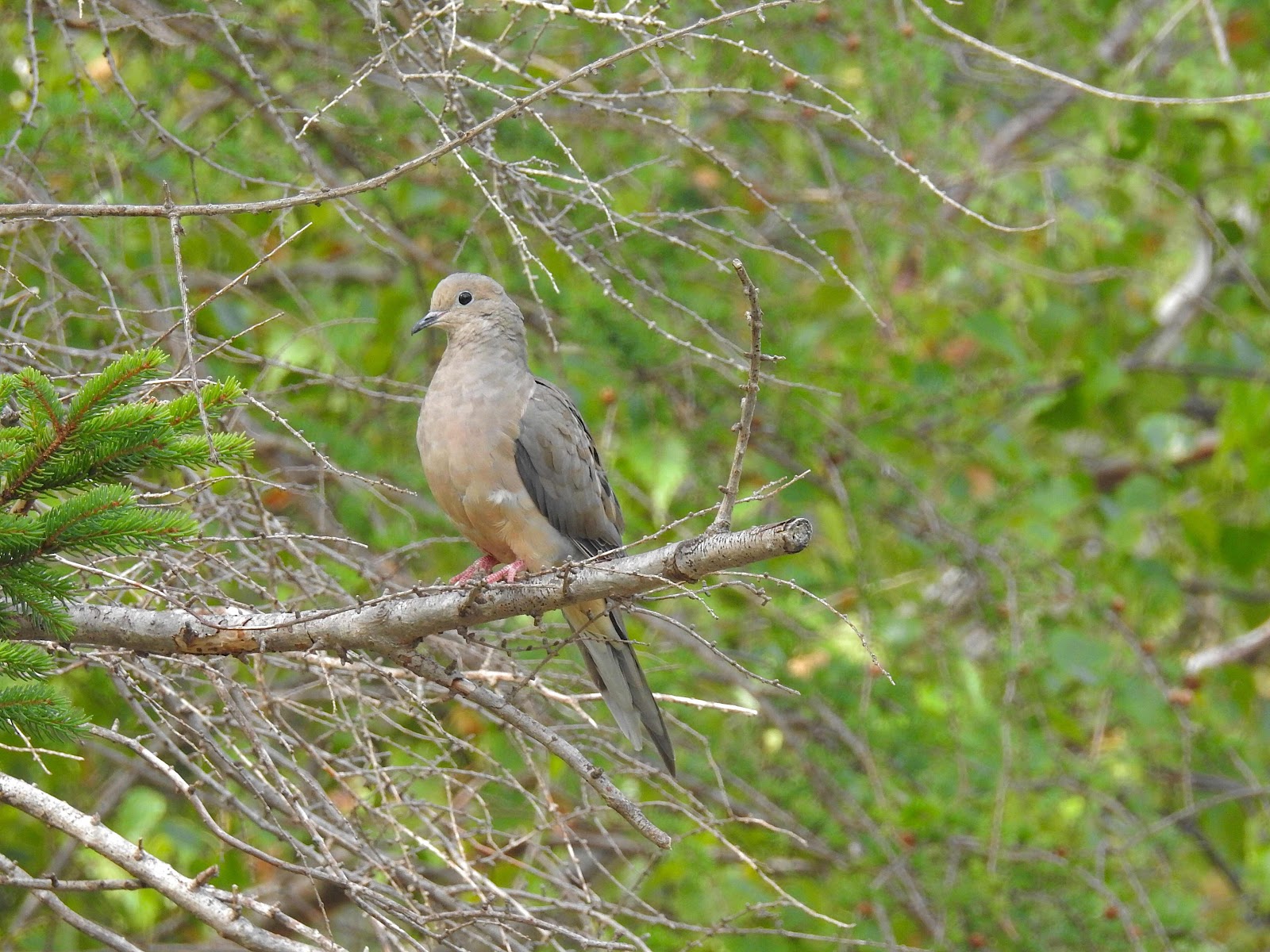 and an Eastern Chipmunk turned away when we didn’t offer peanuts. 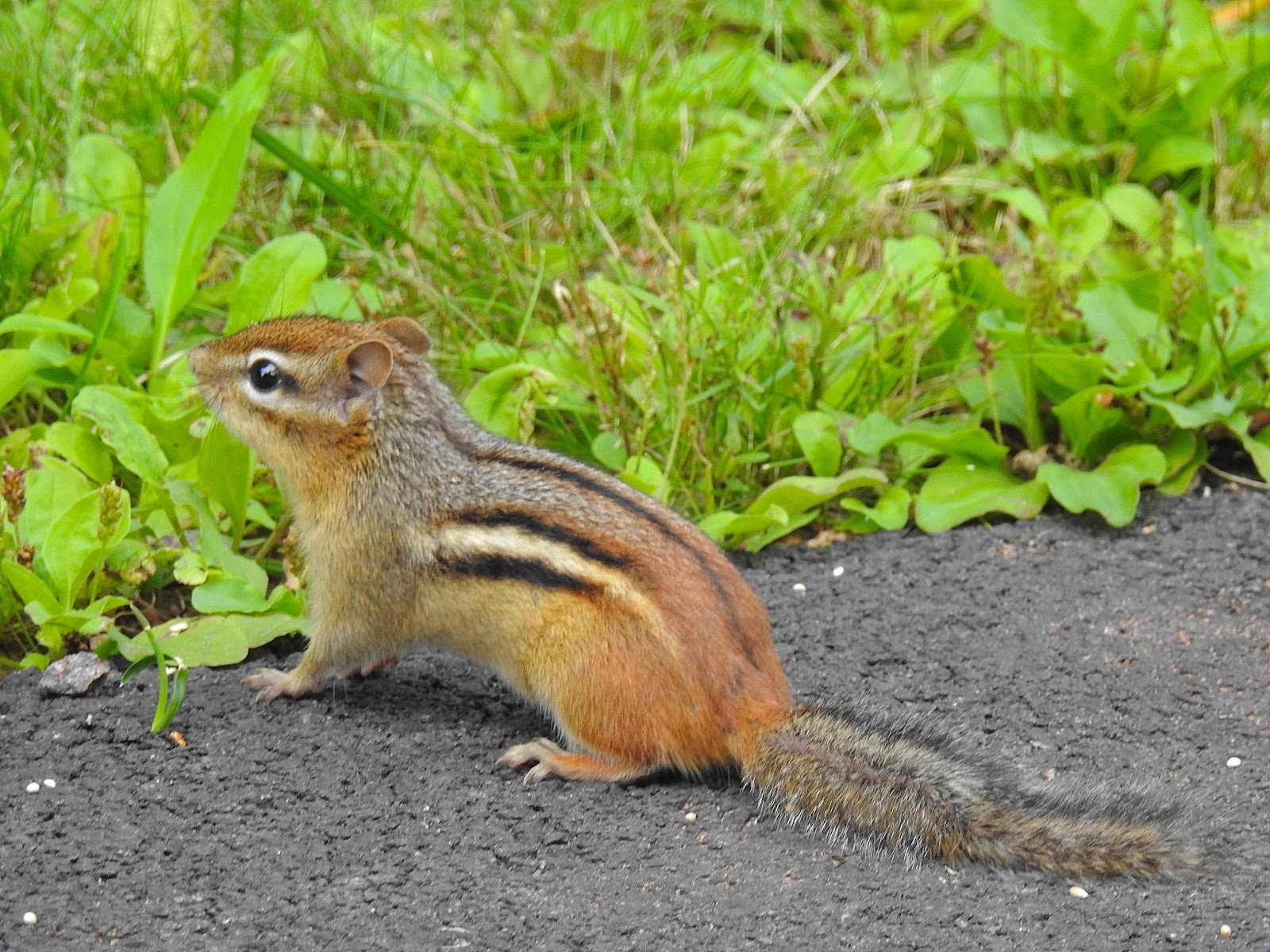 At a feeder near the turn-about, a Red Squirrel had conquered the squirrel-proof feeder and was enjoying brunch. 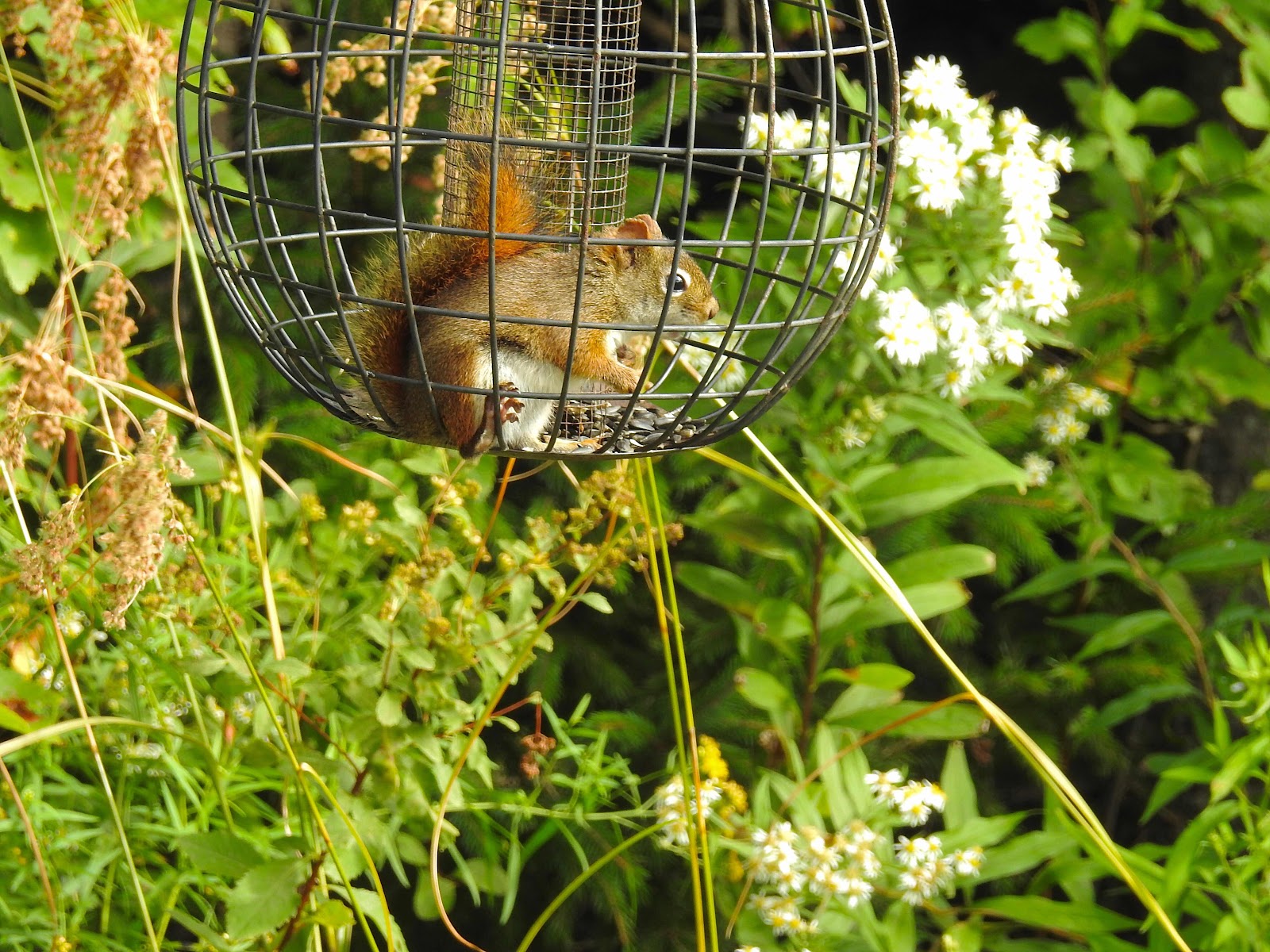 My husband caught sight of movement in the tree where we had previously seen an Osprey and surprisingly, this time a mature Bald Eagle was watching the bay. 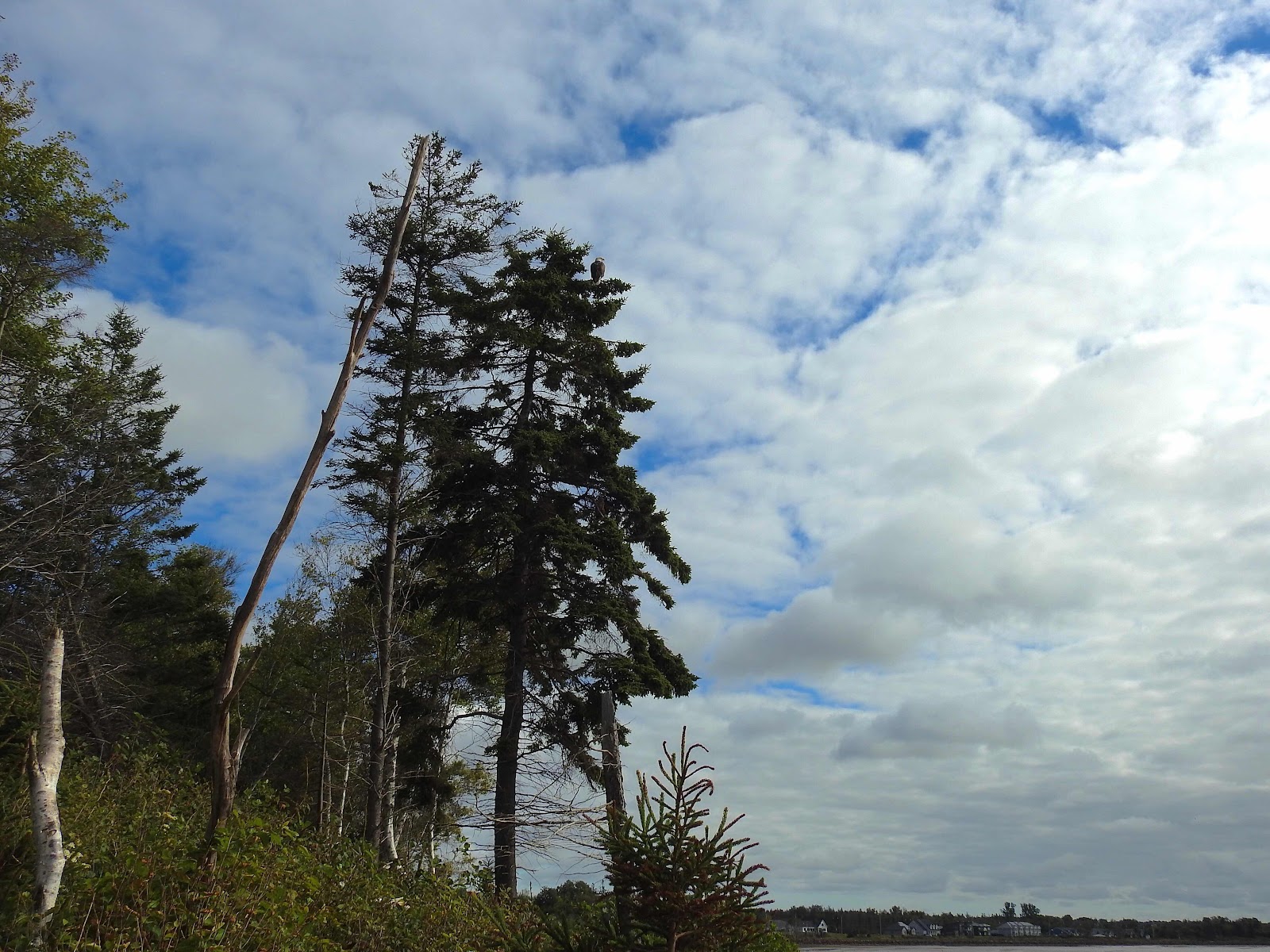 It was aware of its human admirers but outlasted our observations. 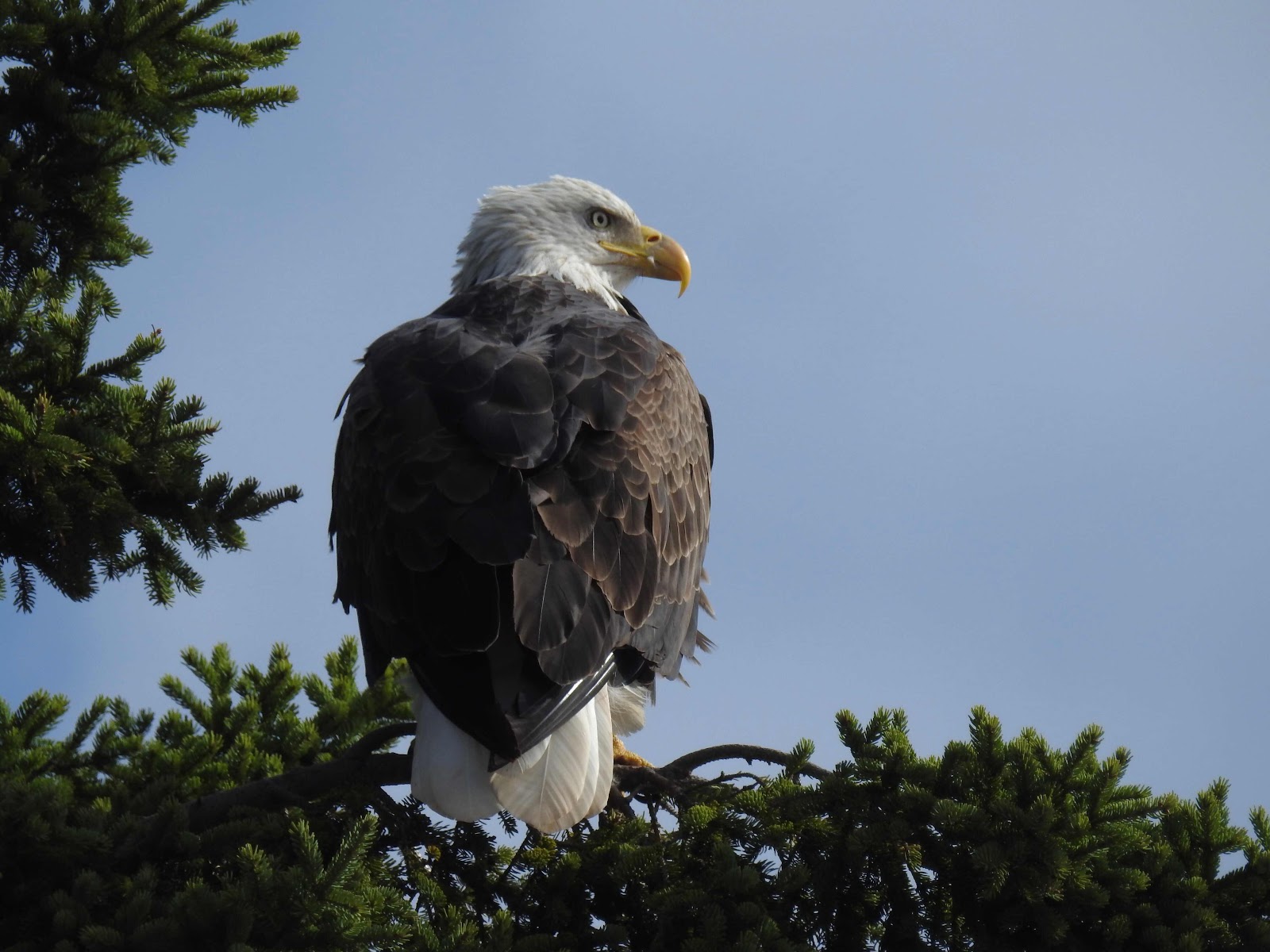 It was amazing to watch as it turned its head 180 degrees as it observed us. 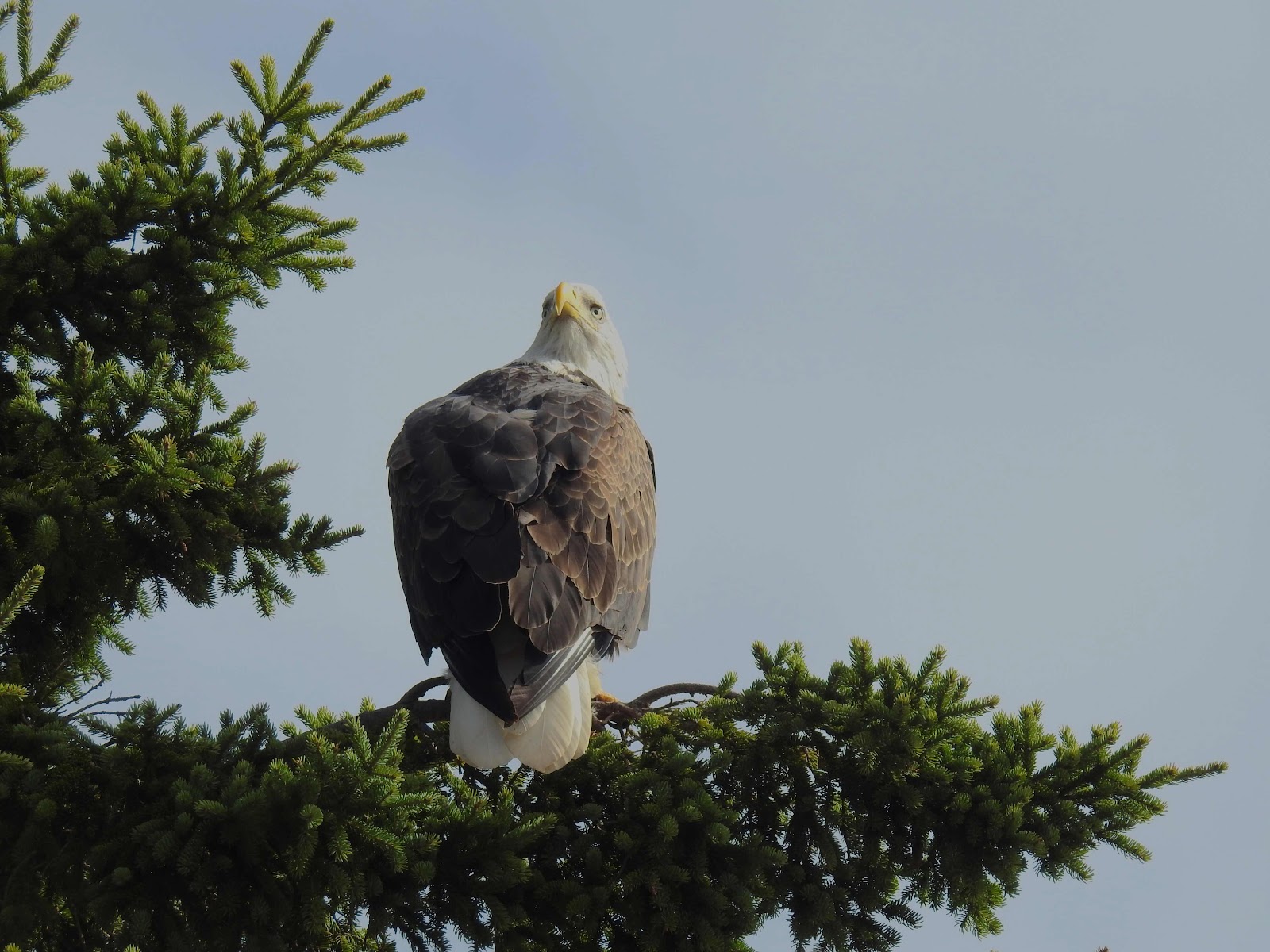 Before we left the area, we were glad to see a Great Blue Heron, which could have been the one which frequents the area, out in the bay, watching for its next meal too. 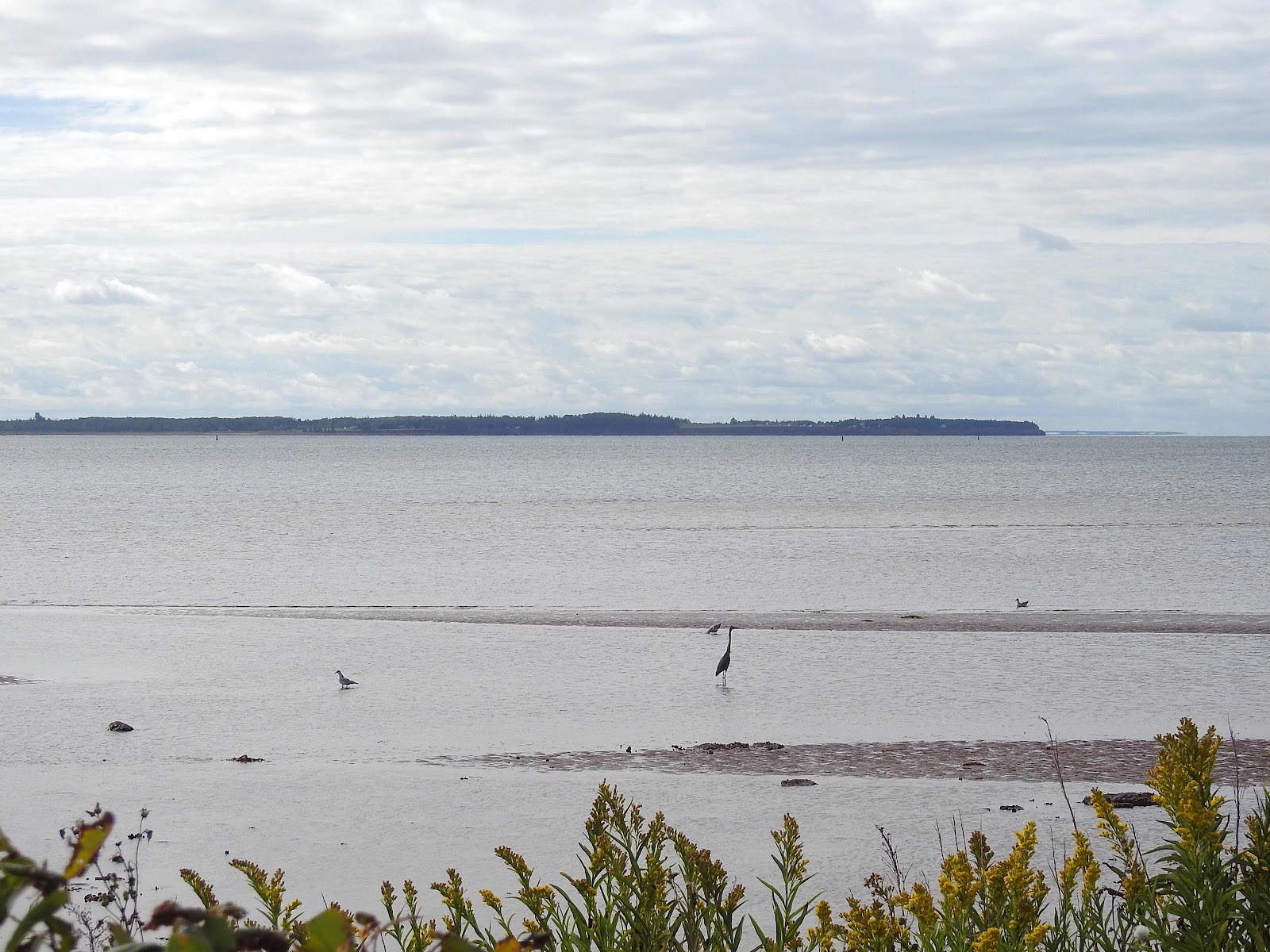 Another great day with the animals along the boardwalk!

There is no such thing as squirrel proof.

The chipmunk says, "Bring peanuts next time, you cheap bastards!"

Although not as frequent as Alaska or where we lived in Wisconsin, we do occasionally see bald eagles here in South Dakota. So majestic, they are always a treat to see.

What a delightful walk. The critters put on a wonderful display for you.
That squirrel is enjoying itself. I hope it can manage to find its way out of the "squirrel proof feeder"
Sue

You have some splendid shots here. Wow. Love the squawking gull and the eagle is a score.
What a beautiful place you inhabit.

Quite an array. I saw a heron this morning, too. We have a lot of waterways with good fishing for herons and cormorants but it's very cool to see them near the road peacefully fishing.

Thank you so much for taking us with you. I am always delighted by the things you see and share.

haha that sneaky little squirrel.
You got some great photos.

Great sighting of the Bald Eagle!

Great shots. You have to know where to look for the critters.

Wonderful photos, every one. I enjoyed them all.

Your blog is no longer coming up in my Blog Reader, I realized a few days ago. I've lost a couple of blogs the same way for no discernible reason. Aaargh!

A perfect outing. I hope there are many more before winter sets in.

dear Marie i am stunned with the divine beauty your images offer !!!!!!!!!!!!
really captivating and intriguing photos ,you are amazing photographer :)

loved the water birds ,squirrel and the bald eagle with completely turned neck wow great shots
thank you so much

Wow! The eagle! They are amazing creatures.

That was a truly wonderful excursion. I enjoyed the squirrel's ingenuity, and the bald eagle pictures are amazing. Thank you so much for this.

The plovers were well hidden - I could only find one! The photos of the eagle are amazing and I laughed at the squirrel. Thanks for sharing.

You both observe and describe so well. I can do neither of these things.

Clever little squirrel! Although I guess where food is concerned you have to be :)

It is worth going out to see all that!!! Love the eagle shots, and the little chipmunk and the red squirrel.

If you are ever bored, on youtube look up Choochoo's story. I have no idea the reason for the name Choochoo's story...maybe I have not watched enough of the videos...but this couple has all kinds of chipmunks that come to eat. One comes in the house to eat, then runs back to the door to be let out. They all have names, and one video tells how they tell the difference in them. It has been a while since I watch any but I used to spend a lot of time watching them.

I am quite convinced, Marie, that the dictionary definition of "oxymoron" should be changed to "squirrel-proof bird feeder"! Putting a rover on Mars is a piece of cake compared to this challenge!

Great photos as always. We have a small stream that runs through town and on either outskirt the eagles gather in the trees along side it. One end used to be a heron rookery but they left when the eagles showed up. There used to be a small run of salmon in it but sadly that disappeared some time ago. And, thank you, I am a big lighthouse fan. So great to see your local lighthouses.

The little chipmunk is so cute!