Notes from the island

Our power is back now after thirty-six hours. We were doing fine with the generator however. The silence after the generator is turned off is welcome and a nice reminder of life as we usually know it.

Our windows all have shredded leaves stuck to them. The young maple and oak trees in the back yard are still in the ground but lost green leaves. Holly leaves from the bush in the front yard were stuck to the patio doors on the back. The bush itself lost its berries which is a huge loss for the birds this winter.

Sunday, it was sunny with a slight breeze and neighbours were out cleaning up around their properties as were we. People helped each other and shared stories of their experience of the storm.

School is cancelled for two days so far as the clean-up continues. Children were scared, but one of our granddaughters slept through it. I don’t know if I’ve ever slept that soundly.

Our gentle island took quite a hit. People are sharing photos on-line of areas of the province we all know, like Dalvay in the National Park. My husband and I were there on the 19th of September. I took these photos:

From the beach looking west 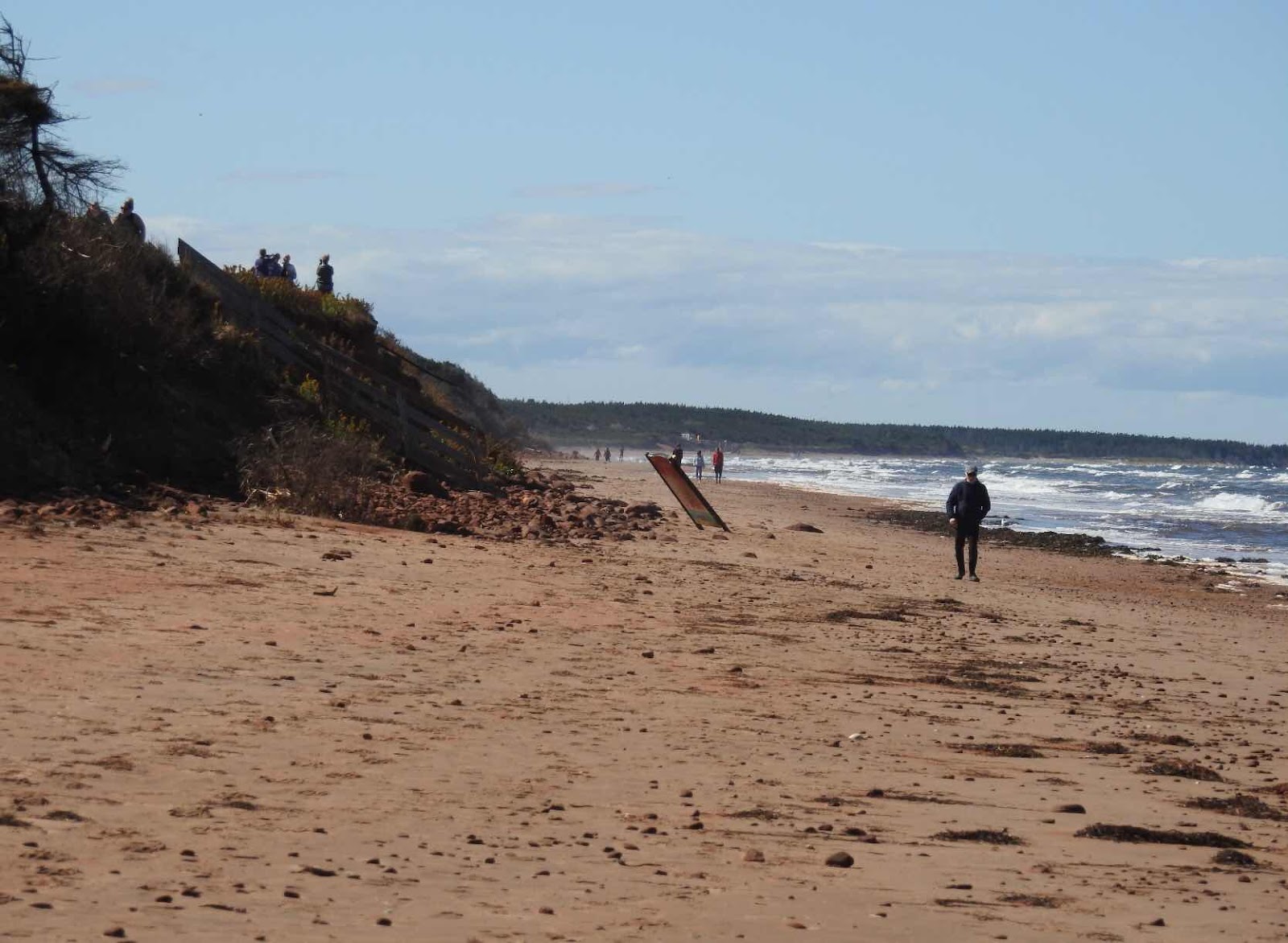 From the beach looking east 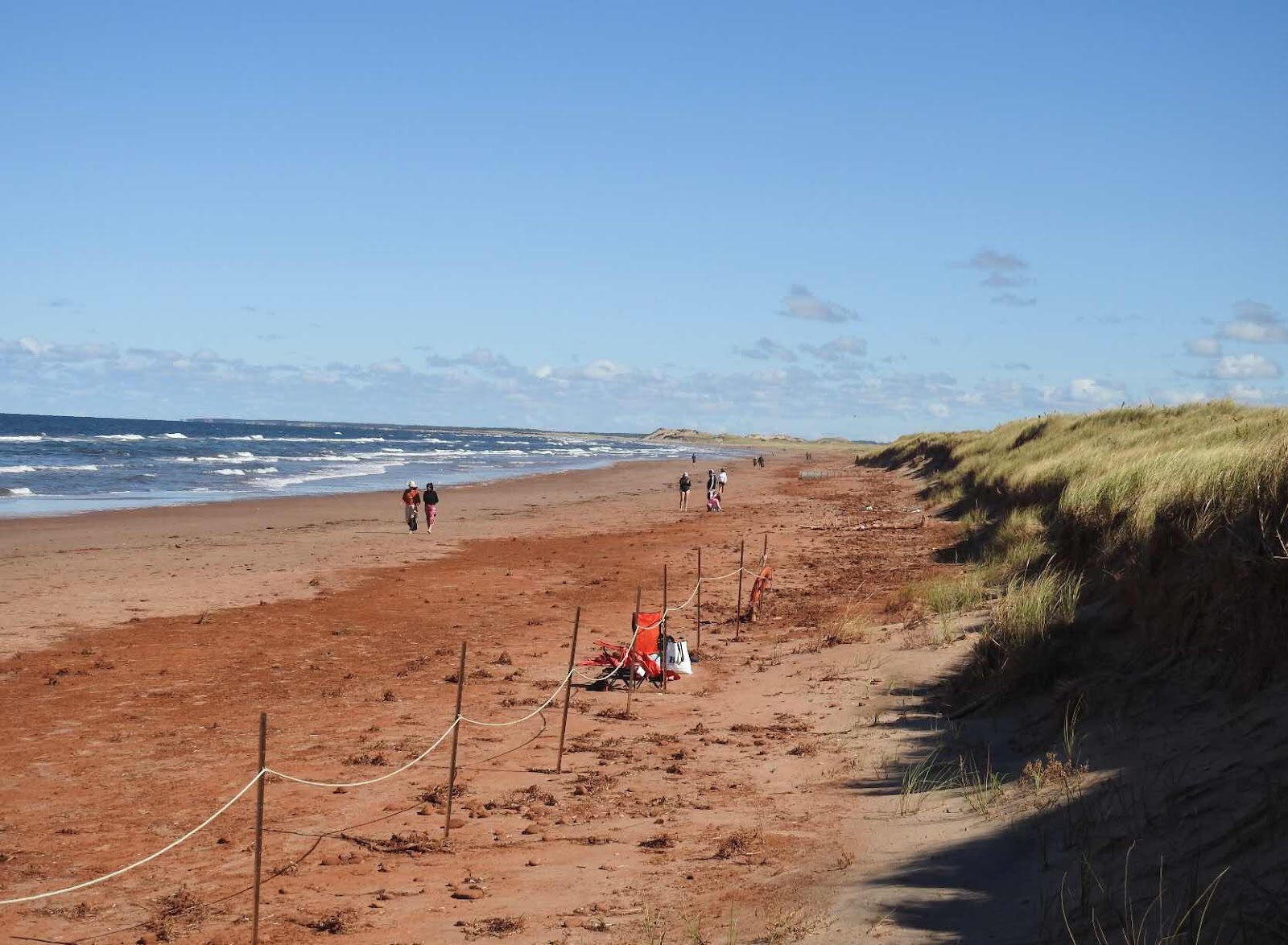 Walkway over the dunes to a crosswalk 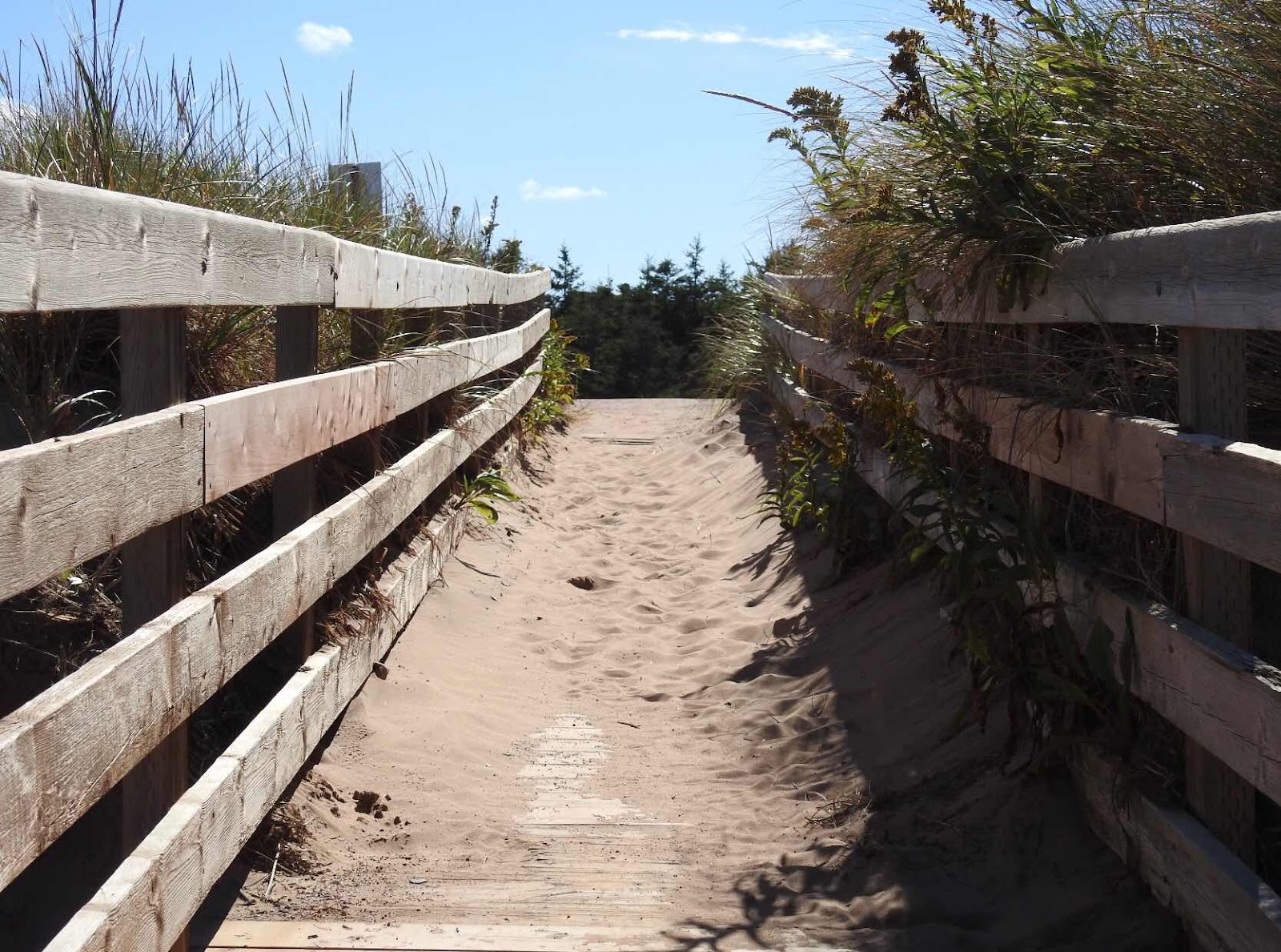 The beach is gone now as are the dunes. The sea is up to the road.

The following photo was posted by The Sands at Darnley on Facebook: 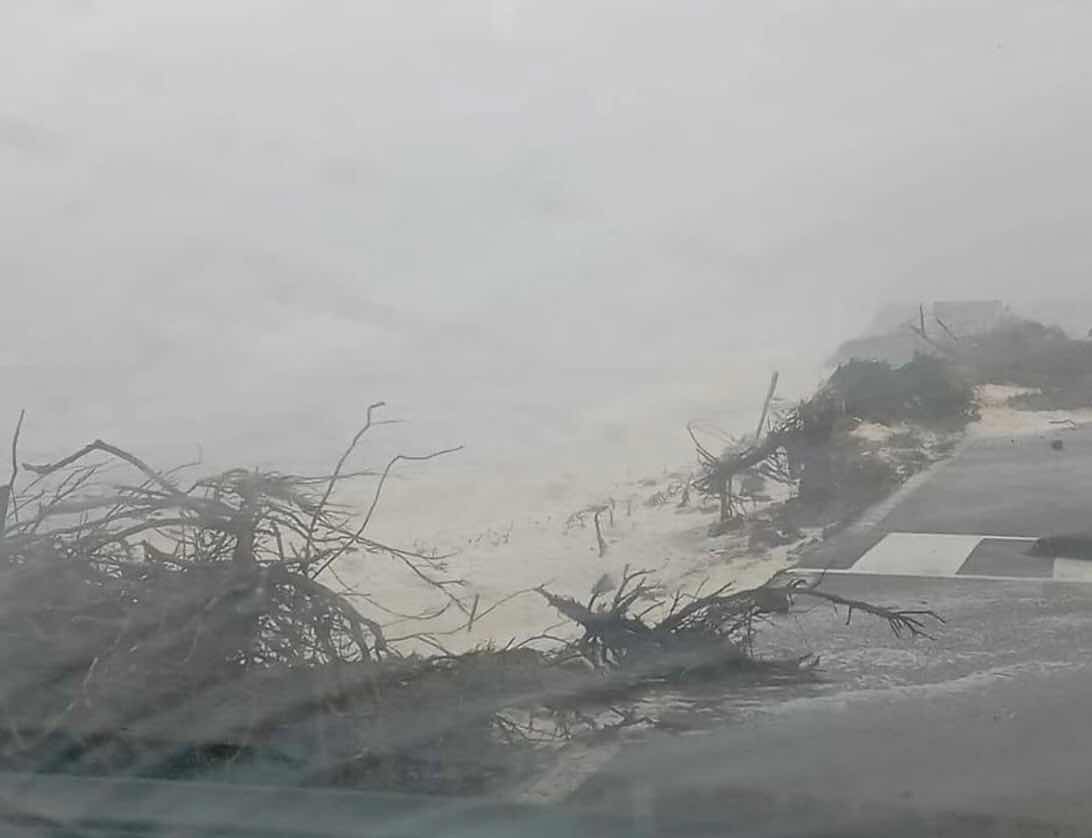 The reports are the same all along the north shore where the tidal surge was devastating.

The Teacup sea stack at Thunder Cove is gone, a victim of the waves. 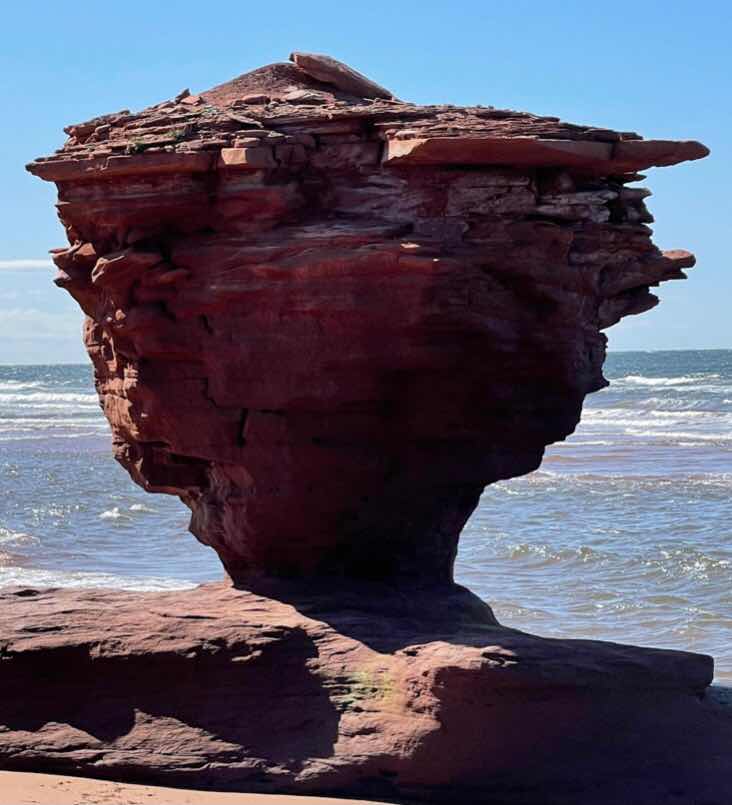 Some bridges and cottages were lost. There was one death.

When we were out around the house yesterday, there wasn’t one bird in the area. No crows or starlings, blue jays, cormorants or geese flying over. It was eerily quiet in the area. Where are they? Did they survive?

It will be days before we visit the boardwalk to see the destruction after the city cleans up there. What of the animals?

Our island changed because of Fiona. She bit off and chewed up the coastline, spat it into the ocean and did her best to destroy what was on land. Knowing what humans have done to the environment, one can only think that we are just seeing the beginning of what others like her will bring. It is a scary thought.

Oh my, what terrible damage to your coastline. Sad to know that the teacup stack is gone. Glad you and your family came through it okay. Better days ahead!

So glad your family is safe now. Your island is so fragile though.

Good to know that you and your family are safe and haven't experienced much damage. But I've been looking at the photos of the destruction caused by Fiona all across Atlantic Canada.... wow, so much damage. Lost homes and businesses. Trees uprooted. Roofs blown off. Roads cut in half. Coastal changes. Astonishing damage.

oooooh it is such a scary thought...with ian expected to hit florida today and roar up the coast. thanks for posting this update, i am so happy you are ok. the island, it's tragic to see so much of it lost!! take care, go slow with the clean up!!

i get this message every time i comment but it seems my comments are posting!!

thank you for good wishes...

Oh my goodness. I am so glad you are safe, but I am sorry to see the destruction left in the path. Prayers for recovery and rebuilding, my friend.

our lead story news story been the storms on the east coast.
I been having trouble blogger.
Coffee is on and stay safe

It brings sadness with all the destruction it caused. People will work together to help clean up the mess.

Such a terrible storm. Scary! I'm so glad you're safe and your home is intact. Sorry for all the destruction. I always wonder about the birds and wildlife as well as the people.

I am glad that you are safe, but my heart aches for the birds, the animals, the environment...

I'm happy to hear you and your family made it through the storm with limited damage. It is truly sad to see the destruction of the beaches and shore line, and the teacup rock.
Perhaps this will awaken some folks to the harm that climate change is and will cause in the future.
I do hope the birds return soon.

I'm so glad you are okay but its so sad to see all the damage and destruction. Oh, the Tea cup mound...how sad... and no beach now..and no birds now.. Truly sad.
Sue

Nice to hear that you and your family are safe. I'm very sorry to hear about the destruction and the damage caused by Fiona.

So glad you survived that well. But sorry to see Teacup Rock gone.

I am so glad that you and yours rode out the storm safely. A really interesting comment on the birds being absent. I have to wonder if they sheltered or were killed by the wind and storm.
And it is sad, really sad, to see the beautiful beach all torn apart. I loved the PEI beaches so much on my one visit.
Climate change is terrifying, really. Our first really bad bit was the ice storm in 1998. Almost all our power is carried on poles and the ice destroyed not only that but also the towers in some places. We were eleven days in the dark, in January. And our generator was at our sugar camp, one kilometre from the house. It took us all of one day to get it. Our sugar bush is still recovering, slowly. Until the next one.

There's been lots of news here about Fiona. I am sorry to hear that the Teacup Rock sea stack is gone. The landscape is surely changed by these storms. So glad you had a generator and could carry on during the storm.

I have been thinking about you and hoping all was well. Relatively speaking, I see that it is pretty well, all things considered. I hope things get back to near normal as soon as possible and that the critters do well.

I was visiting PEI when Dorian blew through, Not fun and the damage was unbelievable , Fiona was stronger , so sad to see the mess it left. All my friends are safe that is what matters, material stuff can be replaced. Barb

I had read that the iconic Teacup was gone. I remembered the pictures you had shown us. This is an experience nobody will ever forget.
When the animals sense an approaching storm, they seek shelter... but this was not just a storm...

So thankful to hear that you fared safely through the storm Marie. I have been in some terrible storms in the south, and the winds are horrific to hear in the middle of the night, not knowing what they are doing. It saddens me to hear the beach and dunes have been washed away. My dad said he remembers Hurricane Edna in the 50s that scared him as a child. I don't ever remember a hurricane hitting there as I grew up. So sad for our island, and praying for those involved in cleanup to stay safe. Often that is where most injuries happen after the hurricanes pass through. Mourning the loss of the Teacup! Thank you for sharing your update, and so thankful that you all fared safely!

Crazy! That is horrible about teacup. I know, and have seen the pride that Islanders take in their yards. I know everyone will be working hard to get them back in shape.

I am just so, so glad that the damage was basically to the environment and not to humans. Your pictures are incredible, and brought me to tears.

Such terrible devastation, although I am glad you are all safe. It is heart-breaking to see the damage and to know things will never be the same again. I also feel for the wild life, and hope your birds will soon return. Take care, Mxx

I need to google and see if birds know to leave an area before something like this. That one photo you posted from Facebook...it really says a lot.

Glad you have your electricity back.

oh no how awful. Having had our big flood in february and all the destruction here, i can sympathise. Hope it gets better soon.

Thank goodness you and your family are safe. The significant damage is scary and hard to believe that the teacup is gone!

Hope the birds reappear, it must have been awful for them in the storm. Sad to hear the iconic teacup is no more.

We still have plans to visit the Island again next June, Marie, and I wonder what changes we will see? We have tinkered with the climate too much and are only beginning to pay the price. I am glad that you are Rick are safe and that your house was not damaged.

Hi, I hope everything is ok! Hugs, Raquel

That's crazy that Fiona took out the rock formations! It's less surprising to me when houses/buildings don't survive a storm, but I always think of rocks as being permanent.

It is scary to think about these storms continually getting worse because of climate change.

That's impressive that your granddaughter slept through the storm! My great grandparents lived in Summerville, SC (about 40-45 minutes inland of Charleston) when Hugo hit and slept through most of it.

My heart has stopped beating several times these last days, Marie, because of Fiona, especially the devastation in FL (where my ex-husband and his wife suffered only loss of power and water in Sarasota). I read your post here and look at the before-and-after photos and so feel for you and what you'll all have to endure with clean-up in the days/months to come. My heart breaks, knowing this is only going to keep happening with increased frequency and severity. I'm so very sorry. Please keep updating us as you are able. And stay safe.

Hello,
It is so sad to hear and see the destruction from these storms. The loss of life, home and damage to the road and beautiful landscapes is terrible, I am glad you and your family are safe. Take care, have a great new week!

OMG. Such a big change to your coast. I'm glad you survived but your right, nature can be quite destructive.