It's hard to think about Mom, Mary (O'Brien) Pretty, without thinking about Maddox Cove where she grew up.  The Cove, as she fondly called it, was instrumental in her formation, due to its people and the environment.
The Cove is a mile down the shore from Petty Harbour, Newfoundland.  As you go 'round a turn' from Petty Harbour, the cove opens up before you.  It is a valley scooped out by glaciers millennia ago, with a wide expanse of rocky beach and Motion Bay into which a small river flows.  The road rims the land on a thin strip eeked out of the mountains, cliffs and beach.  There is land for houses, growing vegetables and grazing animals on the slopes up to the mountains.
The community of Blackhead isn't far from the Cove by road and Cape Spear is just over a hill from Blackhead.  People from Petty Harbour, Blackhead, Maddox Cove and the lighthouse at Cape Spear all knew each other and many were close friends.
This setting in Maddox Cove provided clean water, wood, and sea food of various kinds. The soil, though rocky,  could be enriched with available materials, such as seaweed or manure, to grow enough vegetables to provide for a family.  The land for houses, planting and grazing was reclaimed from the forest.  Berries grew in abundance. Obviously life here required a great deal of hard work.  It was into this setting that Mary O'Brien was born in 1926.
Life in Maddox Cove meant that everyone worked hard and the sense that 'we're in this together' was largely felt by the people.  The men worked from dawn until dusk, but so did the women.  Anything that could be done to provide for a family was the order of the day.  The men went fishing, in season, before dawn in the summer.  They would check the traps and take care of the catch before heading home to the second breakfast, having had the first before they left the house.  There was a time when they also fished for squid to use as bait in the evening.  The rolling in of caplin on the beach also provided a source of food.  Meanwhile, the women were up early too, making bread, washing, mending, sewing, cooking, tending the garden, feeding the animals if the men weren't back on time.  As the children got older, they did their share too.
The men needed time to take care of the fishing gear and boat as well.  Regular maintenance was done between seasons but the everyday maintenance had to be done as well.  Then the animals had to be tended, the barn cleaned out, and the planting or harvesting and storing of produce or hay. The cutting, transporting and chopping of wood was a big job as well.  Repairs to the house or any of the outbuildings was also the man's job. The cellar, store room, barn and stable all had to be maintained. 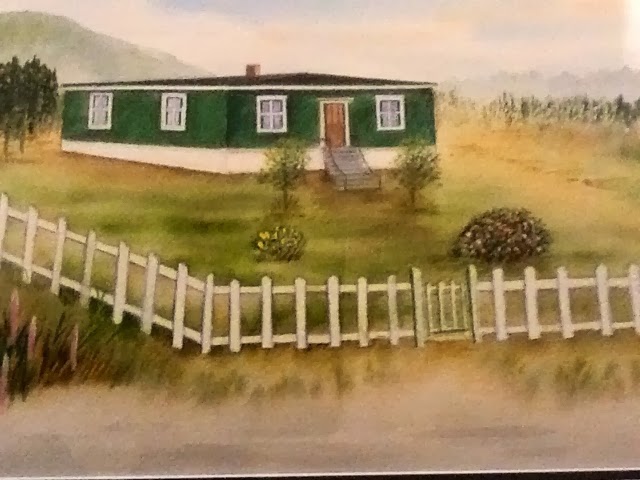 Painting of my grandparents house, done by M. Lee, 1993
The children went to a one-room school with one teacher.  Mom had lots of memories of her schooling and most were good ones.  However, one day at recess time, the boys in her school chased a group of girls, including her, up the road towards Petty Harbour and wouldn't let them come back.  The boys threw rocks at them.  When the school bell rang, the boys got back in time, but the girls didn't and got strapped by the teacher.  The girls weren't allowed to explain what had happened.
Every day one family had to bring wood for the stove and the children took turns cleaning up after school.  The teacher spent some time each day with the various age groups and did some things with the whole group.  Exercises, done by the whole group, were performed to a song specific to the activity.
It began, "Exercising does us good, everybody knows."  Mom knew the song and the exercises appropriate to the words her whole life.
Television did come to the Cove until the early 1950s but several families had radios when Mom was growing up.  One radio program in particular was a favourite of many.  About a fictional ship, it was called The Adventures of the Irene B. Mellon, written by Jack Withers.  Families would get together to listen to the radio drama.  Music and dancing were also common as people got together to have fun.  Christmas was always celebrated by mummering, dressing in disguise, visiting each house, dancing and singing for a refreshment.
The Mummers Song by Simani, shows the essence of the mummering tradition.
http://m.youtube.com/watch?v=E86bcriRtW8
Some of my grandfather's sisters lived in the Cove for a time as well so Mom had cousins living there.  Families were big in those days so my mother's family with only three children was unusual; no doubt it was more difficult to support larger families.  The friendship with her cousins was particularly important to Mom throughout her life.  Never having had sisters herself, her cousins Pauline, Angela and Mary Madden were like sisters to her.  However, everyone who grew up in the Cove seemed to have a special bond which was obvious whenever they met each other later in life.  The small, closely knit community bonded people in a way that was a mystery to those who hadn't experienced it.  To those who did experience the Cove, it was etched in their memory forever. 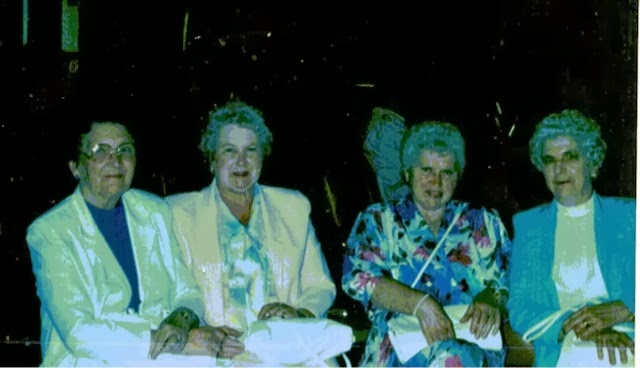 Mom, her cousins, Mary Kieley, Angela Lee, Pauline Kieley.
The song The Squid Jigging Ground by Art Scammel tells the story of the squid bait fishery, known as squid jigging.  I particularly like this rendition, by Ryan's Fancy.
http://m.youtube.com/watch?v=ijLPFNOhx_o

My mom's father was a White from Petty HR, they owned a farm in Goulds .When I lived in Oshawa I had a minor operation and when I woke the nurse who was in the operating room with me was a CHAFE , my first cousin , 5 times removed ,