Again this year, my husband and I accompanied our daughter and our grandchildren to see the ballet, The Nutcracker, Casse-Noisette, in Moncton, New Brunswick. The show, staged by The Academy of Classical Ballet and Modern Dances is performed at the Capitol Theatre and accompanied by Orchestre Tutta Musica.

New for us this year was our two and a half year old grandson who saw the ballet for the first time as did my husband. They have usually stayed together at the hotel while the girls, their mother and I take in the ballet.

The two year old was fascinated by the music and the performances. From the first orchestral sounds he gave his full attention, and when the curtain went up, he was captivated. 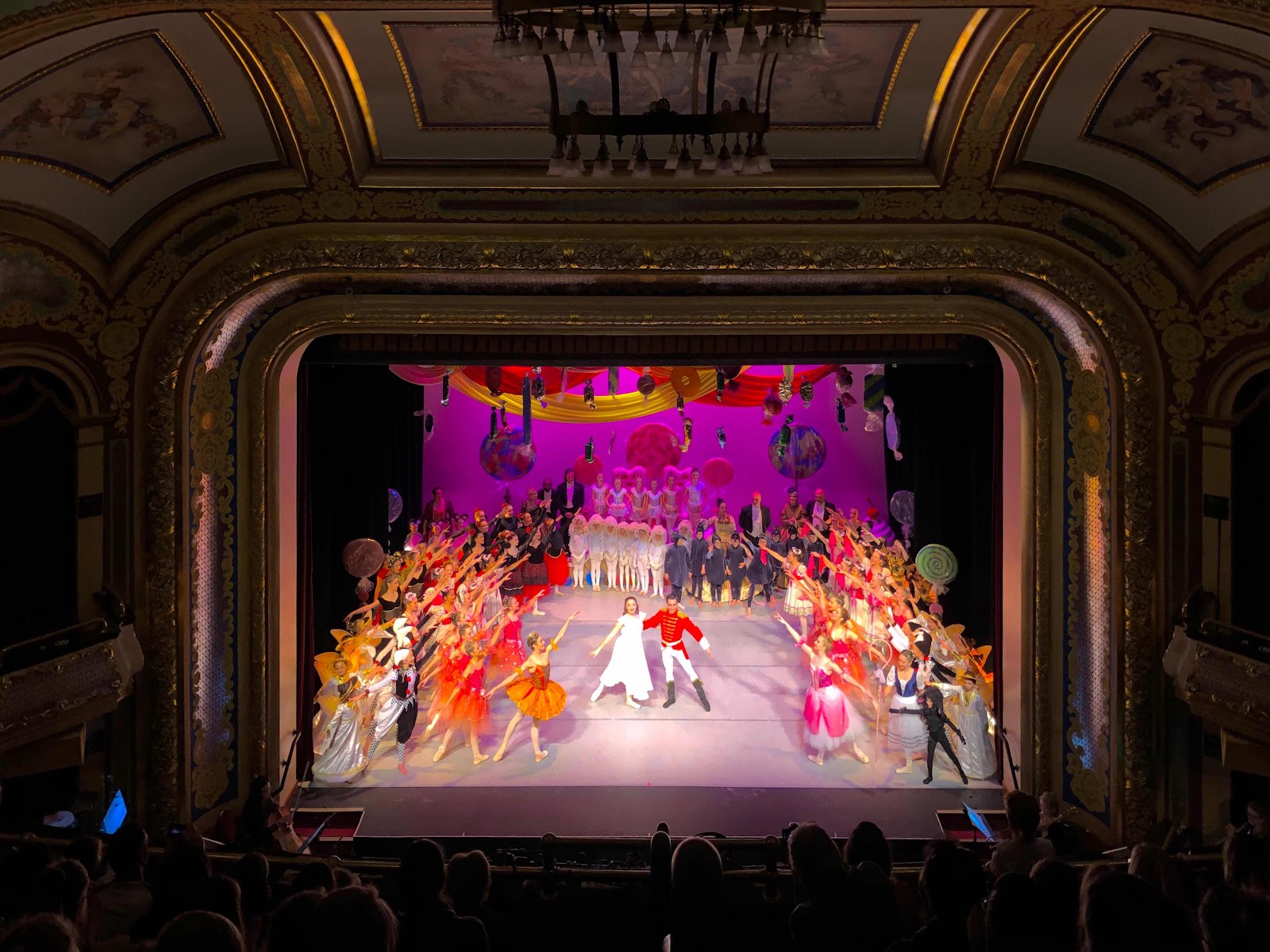 His sisters have seen the show for years now and rarely turn their heads once the show begins. The costumes, performances and the music are better every year. 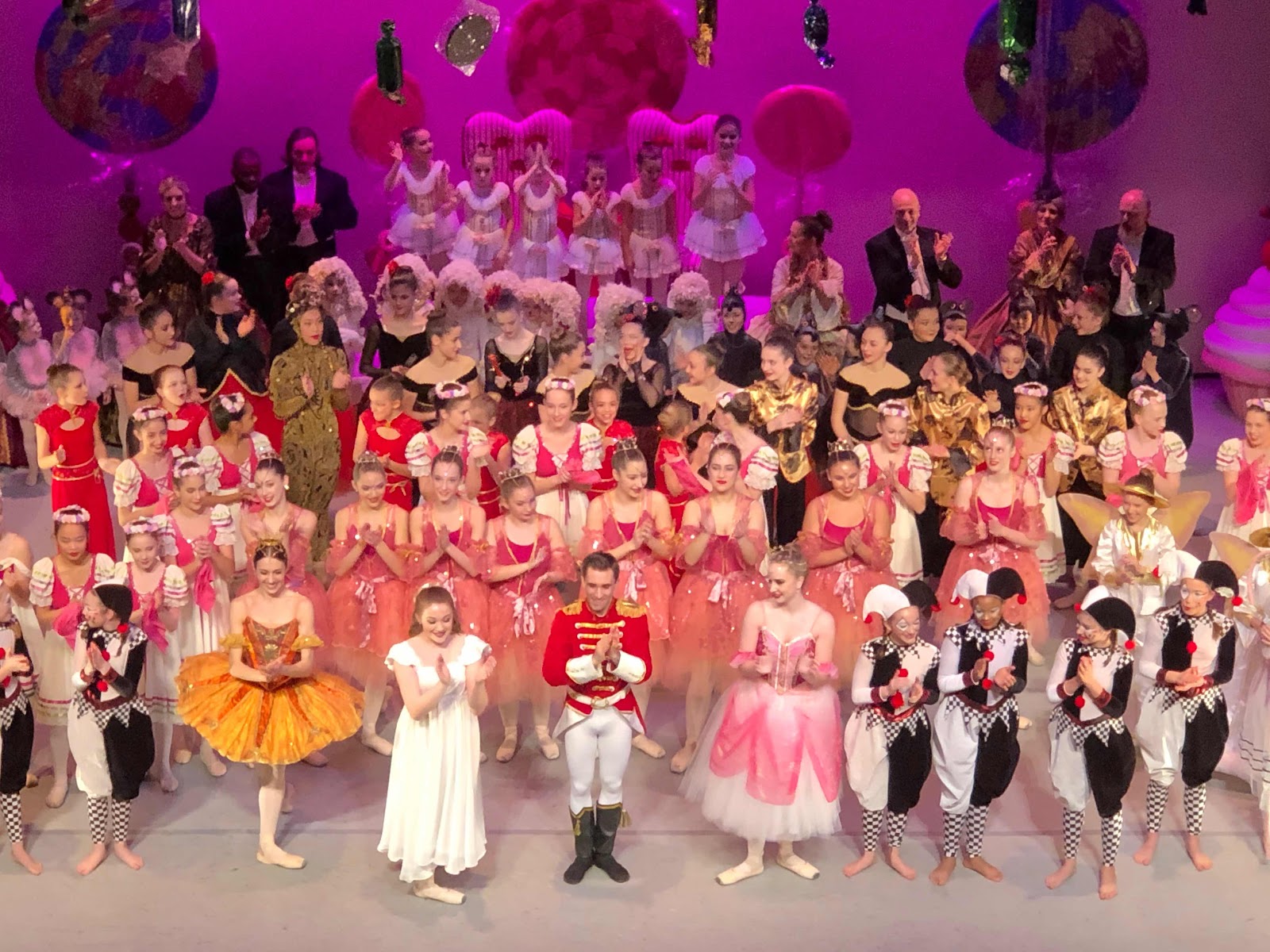 At one point, as the music became dramatic and the Nutcracker fought the Rat King, the two year old said, “Oh no.” At other points, he handed off his blanket and doll to his mother and leaned forward to take everything in. Late in the second act, he fell asleep in her arms. He is only two after all.

Their grandfather was another story. For him, the music is like scratches on a blackboard and ballet is not his favourite. He enjoyed the tap dancing of the toy soldiers best of all. However, he was glad when the ballet was over. He would have liked a nap too.

The rest of the family hopes to take in the show again next year.

Seems like a good tradition. I have seen it once, along time ago in Toronto when Sue and I were just getting together.

A big and colourful cast! Glad (almost) everybody enjoyed it!

What a nice family tradition. It is nice to hear the 2 yr old enjoyed the performance too. Enjoy your day, have a happy weekend!

One of my mother's favourites. She was not introduced to ballet till she was in her fifties and needed much persuading to go then. However she found she loved it. It's always fun to watch children's reactions when they encounter something new.

How wonderful - and I love that your grandson was entranced as well.

What a wonderful family tradition. I took my sons for the first time when they were 3 and 5 in Seattle. It was a matinee and they let the small kids perch in front of the orchestra pit. They were spellbound through the whole performance. So fun to see it through the eyes of children.

He will be three next year, and I'll bet he doesn't fall asleep then. Such a lovely family tradition! :-)

A wonderful family tradition and now your grandson will be a fan of the Nutcracker.
Happy weekend to you!

I've seen it in Toronto in my school days, but not since. At the very least, I do like Tchaikovsky's music, so I'd enjoy that element of it.

There's always a run of a few days here at Christmas at the NAC for the Nutcracker.

So glad he enjoyed it...it had to be about so much fun just to watch him.

It's good to hear that the two year old enjoyed that well. I guess it's not for everyone, but that's why there are so many different styles out there. Something for each one of us.

A good thing to see.

How wonderful to be able to see this ballet. I have only ever seen it on television before, and loved it.

I have been to so many performances of "Nutcracker" I have lost count. It is always magical, however, the music both delightful and timeless, and the children enjoy it always.

Such a wonderful tradition to have! My daughters would definitely love the nutcracker.

It sounds amazing and I am impressed that a two-year-old enjoyed it, well done to you all with taking him along. Cheers Diane

I have not taken the Grand Girls to the Nutcracker. It does seem so long for the youngsters but if you girls and little guy enjoyed then maybe we can still catch it after Christmas.

What a lovely thing to do as a family. Wonderful pictures.

hehehe, i know how grandfather feels, many do!! i, however, love shows like these, the music, the costumes...every single part of it!! the costume look awesome...it's so nice you were able to go as a family and that the little guy seemed to enjoy it!!

Excellent shots Marie, so lovely to see the gorgeous costumes. Christmas is a time for ballet concerts for Aimee and I also, two of my nieces take ballet lessons, different schools so two concerts. The Nutcracker is a favourite, I enjoy it every time also 💜

Hah! I am like your husband, not a fan of ballet (or musicals) :) Your grandson did very well to stay awake and engaged for so long!

these are lovely images ,beautiful costumes and enthusiastic faces are reflection of vibration that life and nature offer :)

i am sorry that your husband did not enjoy the event ,may be at this part of age we all lack of likening for music and prefer silence :)

I love The Nutcracker - I see it at least once every Christmas/New Year.