It was mid morning and we were late getting started. Most recent days when it was fit to be outdoors, we had previous commitments. It was overcast, 10 degrees C and windy but great for a walk. It was good to be on the boardwalk again.

Off in the distance to the south, the sky was blue. We walked towards the expanding blue and watched the harbour, roiled by the high winds. As we walked along, beams of light broke through the clouds in different locations.

Breaks in the clouds gave sunbeams the avenues to various locations in the Northumberland Strait. 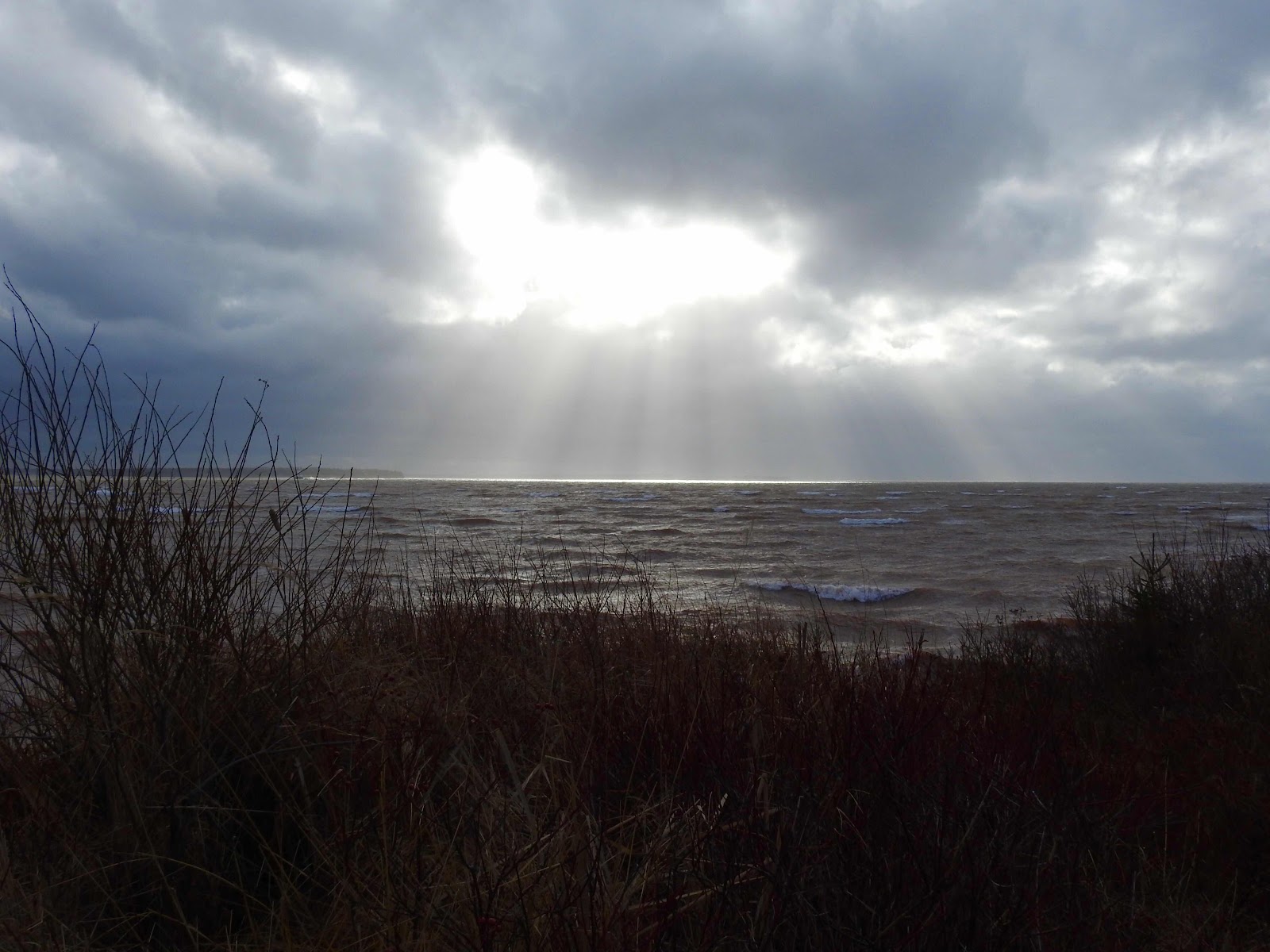 The sea in the foreground looked like chocolate milk as streaks of light spread from the openings in the clouds. 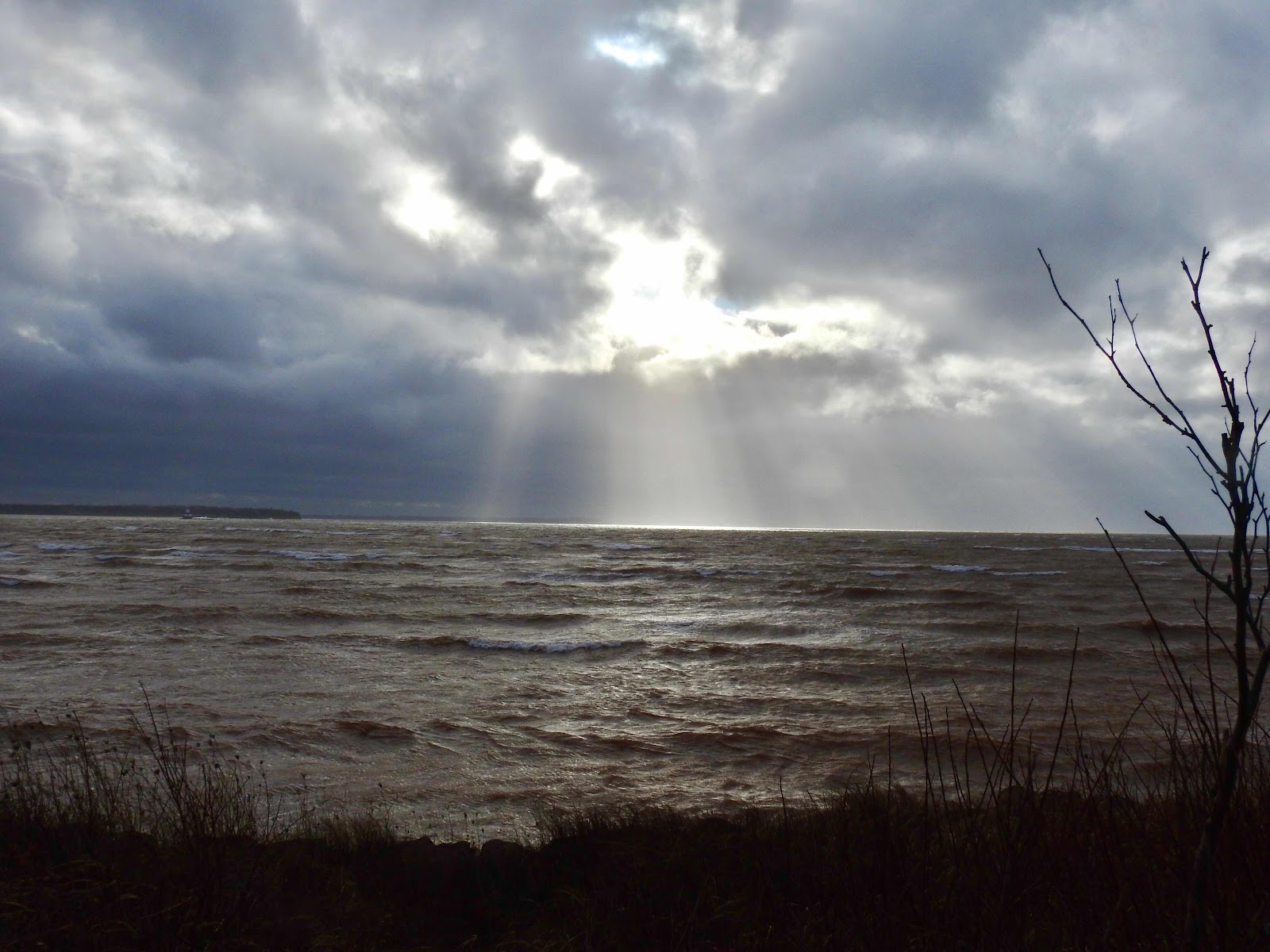 Beams of light played around the lighthouse. 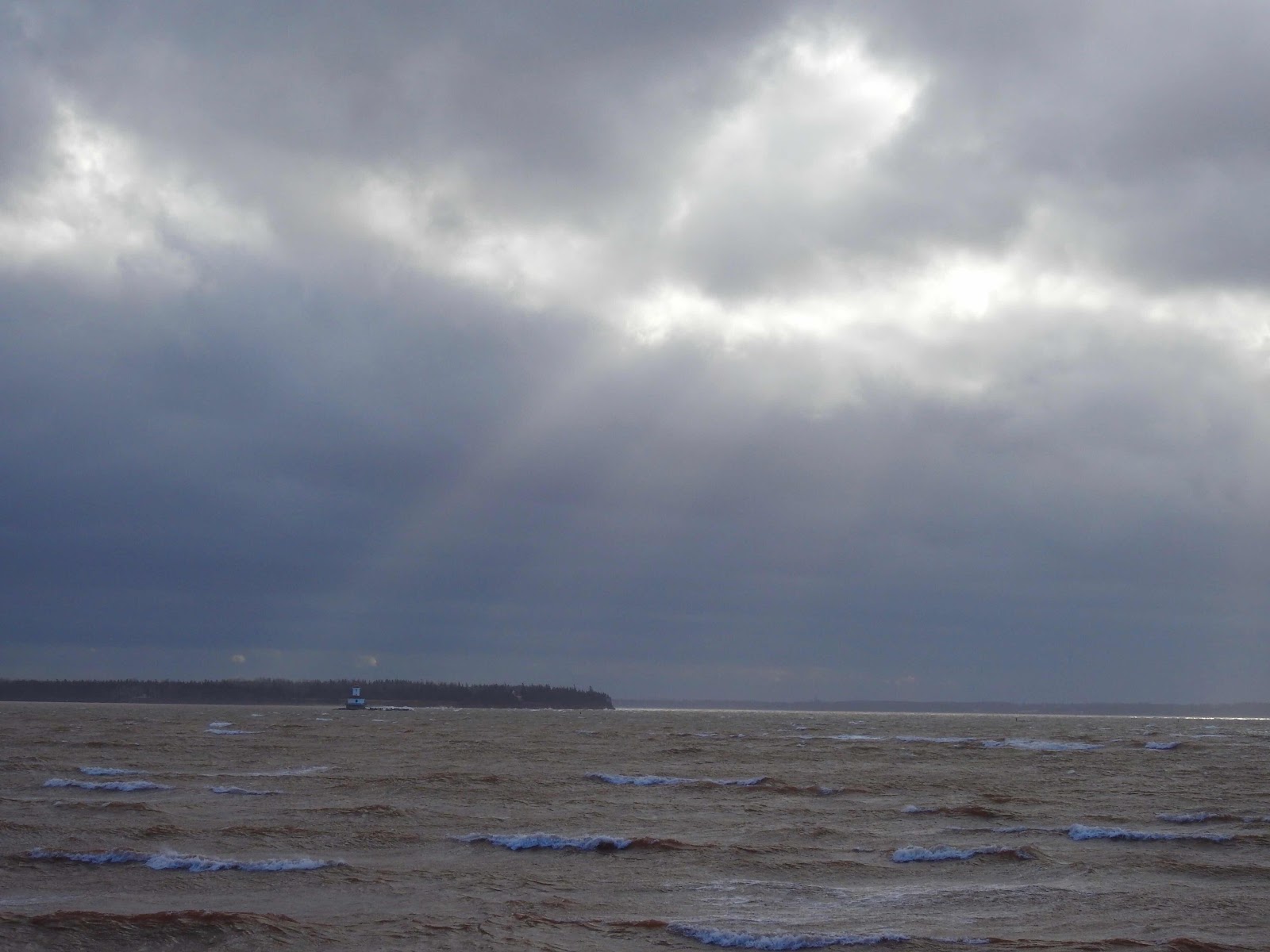 In the distance, the light on the water looked like an energy beam from an old science fiction program. “Beam me up, Scotty,” I said into the heavens as the wind carried the words across the landscape. 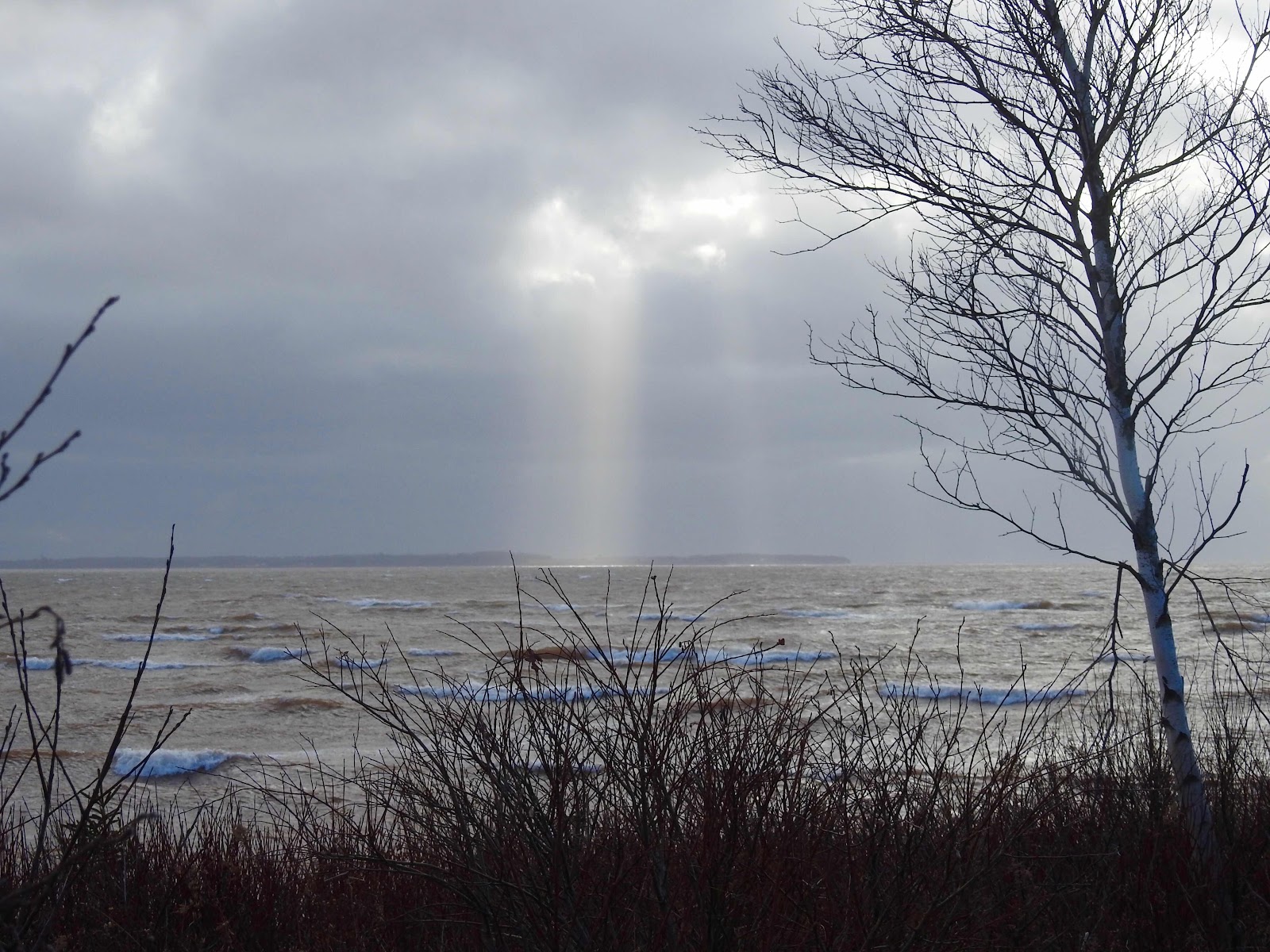 Before the sky cleared, the view through the trees resembled a moonlit night. 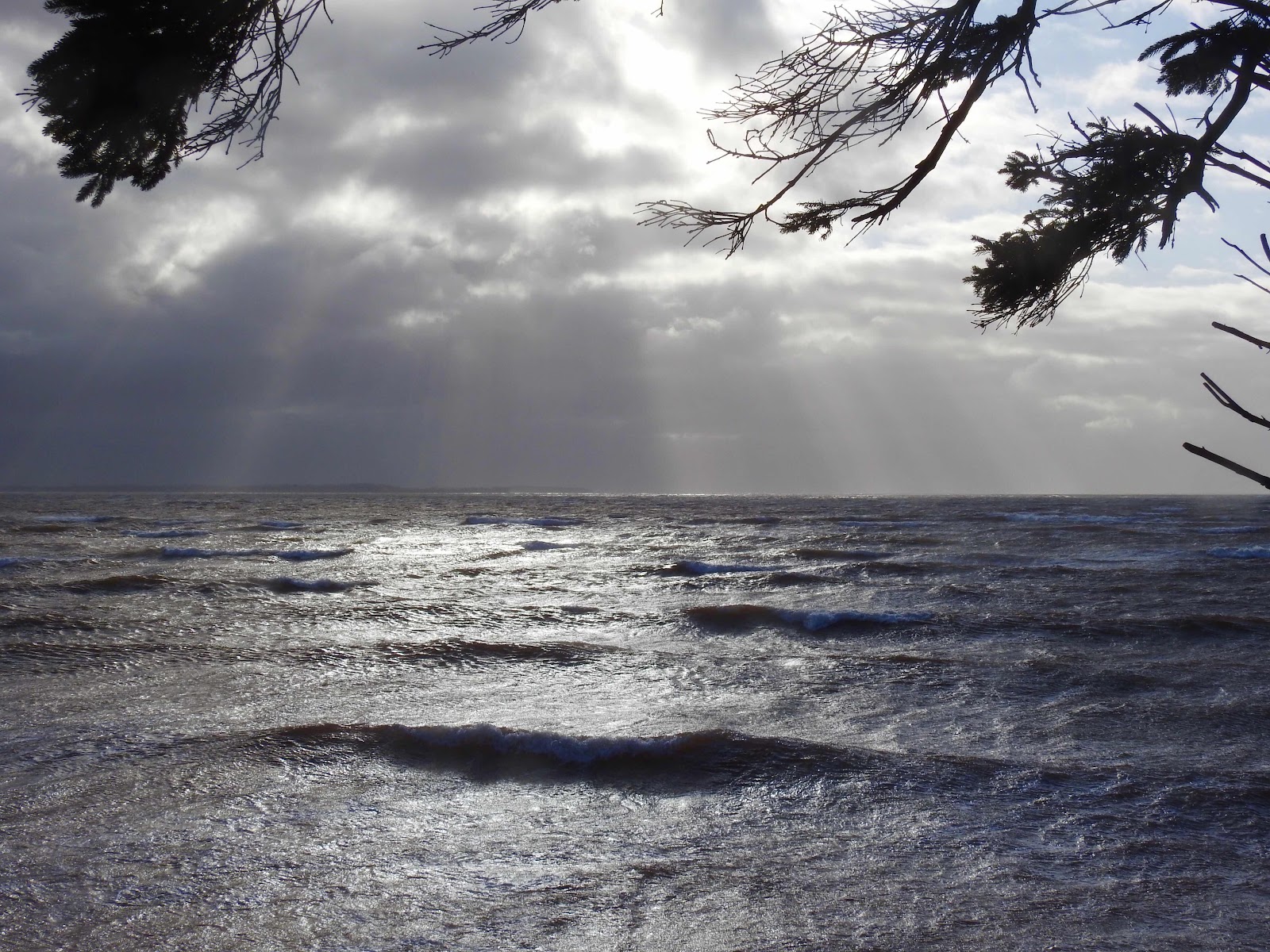 Light can be an amusing companion.

Wonderful photos. They made me smile and be grateful. It is so hot here (43C) that its hard to imagine cool weather. Thanks for sharing.

As you point out light can be an amusing companion, a trickster sometimes. Wonderful series of images,

Nature's light shows are the best, especially over the sea.

Sun rays can bring so much hope!

So pretty! I thought of Star Trek too when I saw your pictures. I hope you have a great day, Marie! I always love your posts. :-)

All I can say is that you are one tough cookie. 10c is definitely not going out for a walk weather in my book. But look what I would miss. Great pic.s

I dearly love these photos!

A grey and stormy day!

beautiful images marie, often my camera does not capture the beams of light!!

i'm so happy you were able to get out, the fresh air is always good for you!!

Each of these pictures is a piece of art. Of love those light beams through the clouds.

Absolutely beautiful photos. i love those light beams shining down on the sea, always makes me think of a space ship coming in for a landing.

Oh, my...I love to watch the sky when it is like this. Well, I love watching the sky period. But have always had a fascination with the rays like this. Loved them all!

You are so gifted both in written words and photos. Wishing you a very Merry Christmas. xo

For me, Marie, seeing images like these remind me of the miracles all around us every day, if we but open our eyes to see! Thank you.

I love sunbeams (not that I get to see them that often) and your photos capture them beautifully.
The "chocolate milk" colour of the water intrigues me, as I cannot say I have ever seen water quite that colour before.
Fascinating :)

Wow, stunning photos Marie.
Shafts of sun light look almost like God is reaching down to us.

Beautiful photos. Love the light beams reaching to the water.