We were focussed on cycling so it’s been a while since we saw our animal friends along the boardwalk in Summerside. On a cold morning, after a sprinkle of snow overnight, we headed for a walk in our favourite place. It was good to be back home. 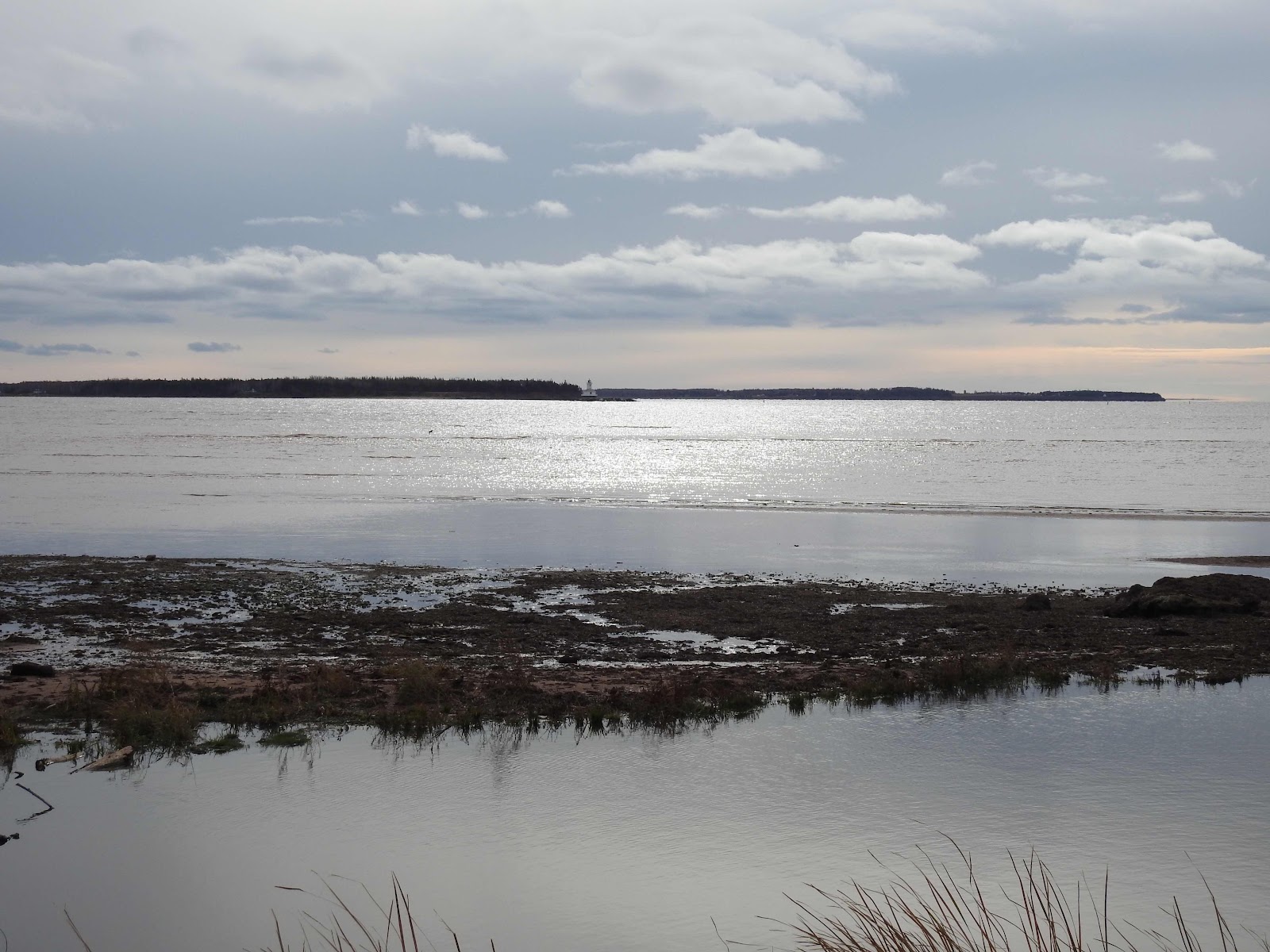 The animals were active in the morning cold. A single Canada Goose floated in the harbour near the gazebo. 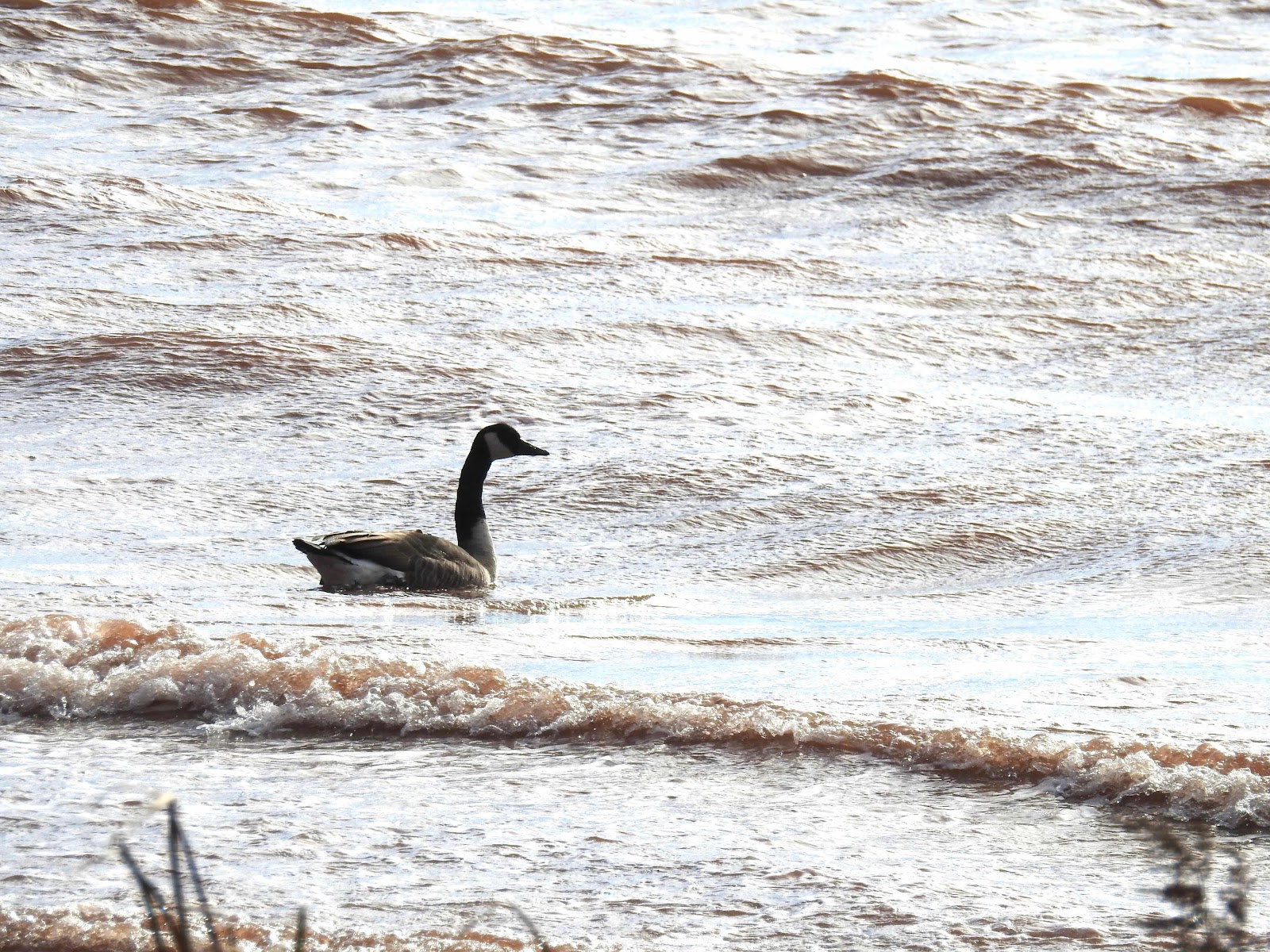 It must have abandoned the flock swimming further along the shoreline. Meanwhile nine American Black Ducks swam around in the stream which was looking like a pond. The saltwater marsh is flooded. 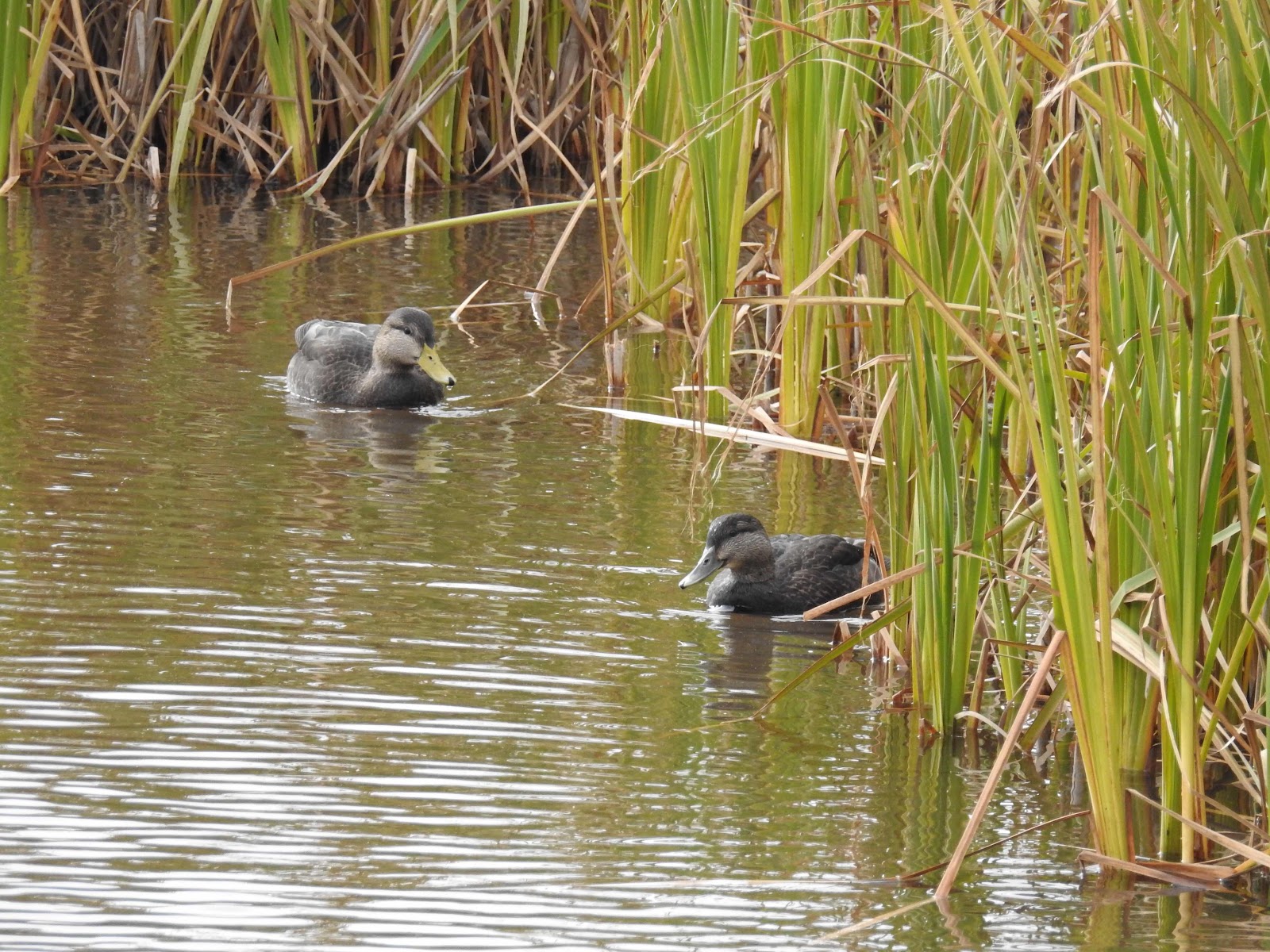 Chickadees were about and would probably take seeds from one’s hand. They are accustomed to people feeding them. 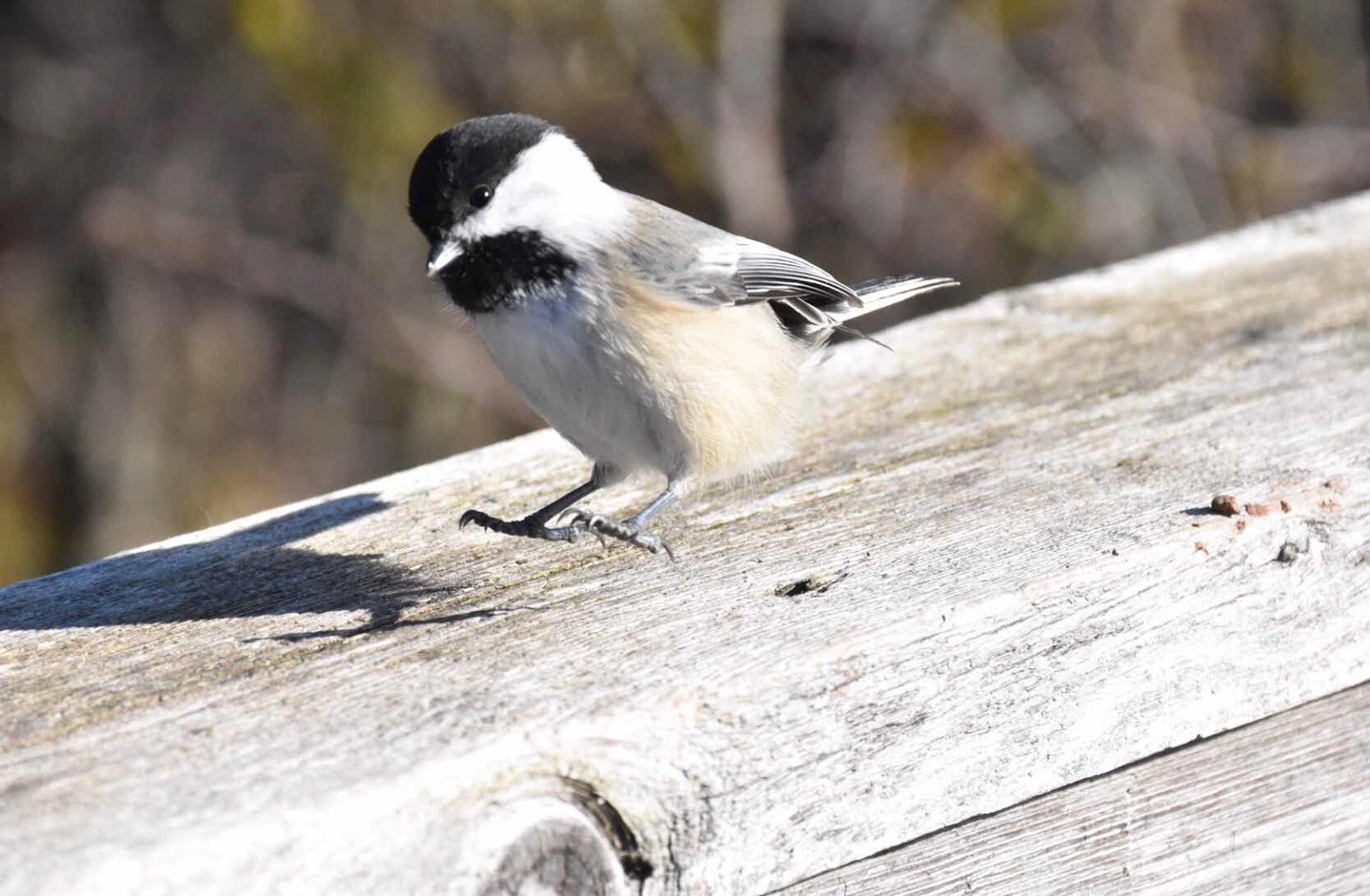 Blue Jays were noisy among the trees and active around the feeders where people placed seeds. They chase off the smaller birds. 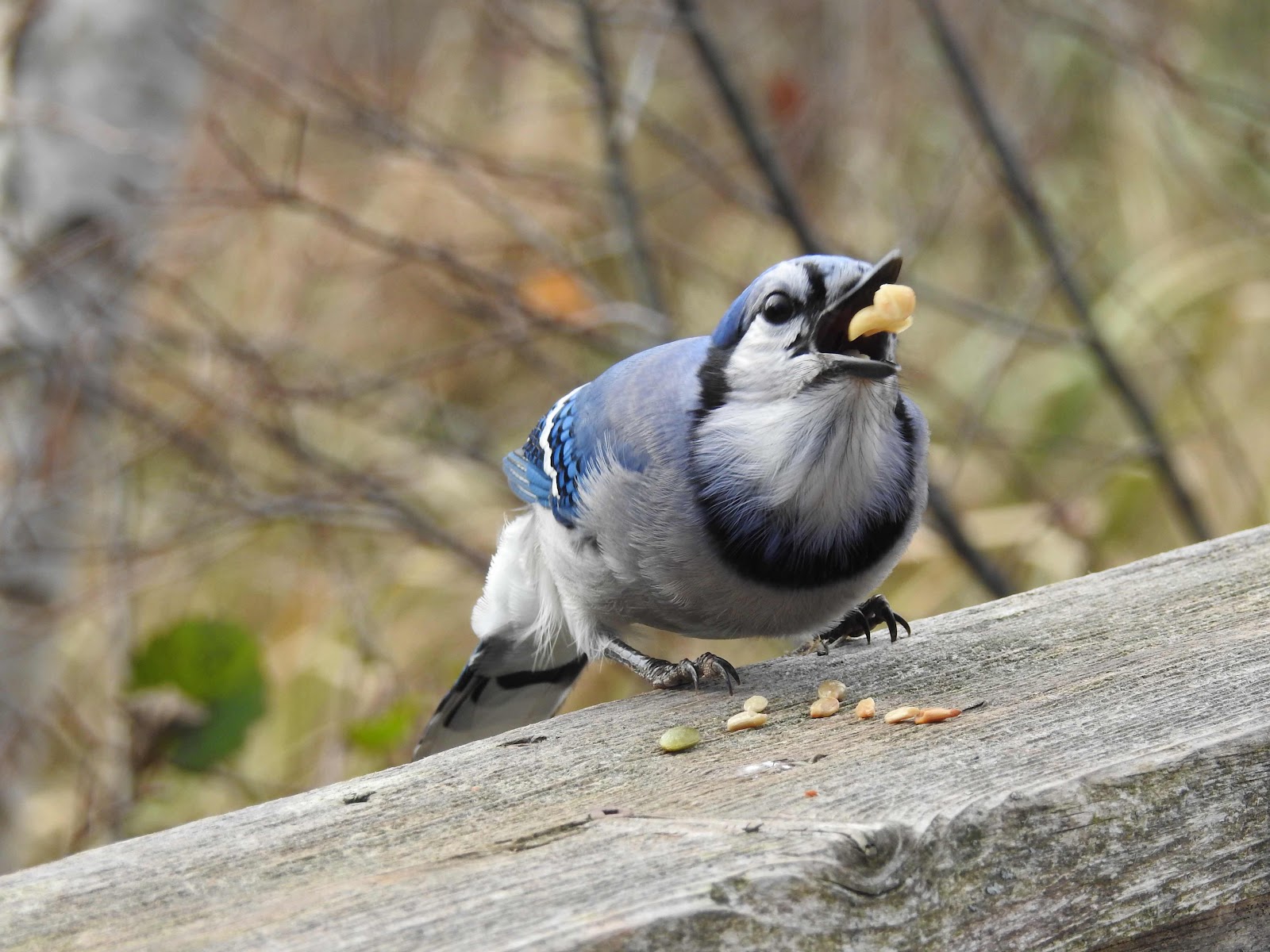 Squirrels approach and if you encourage them, they will walk up your leg. My husband and I watched as parents and their two children placed a peanut down for an approaching squirrel. 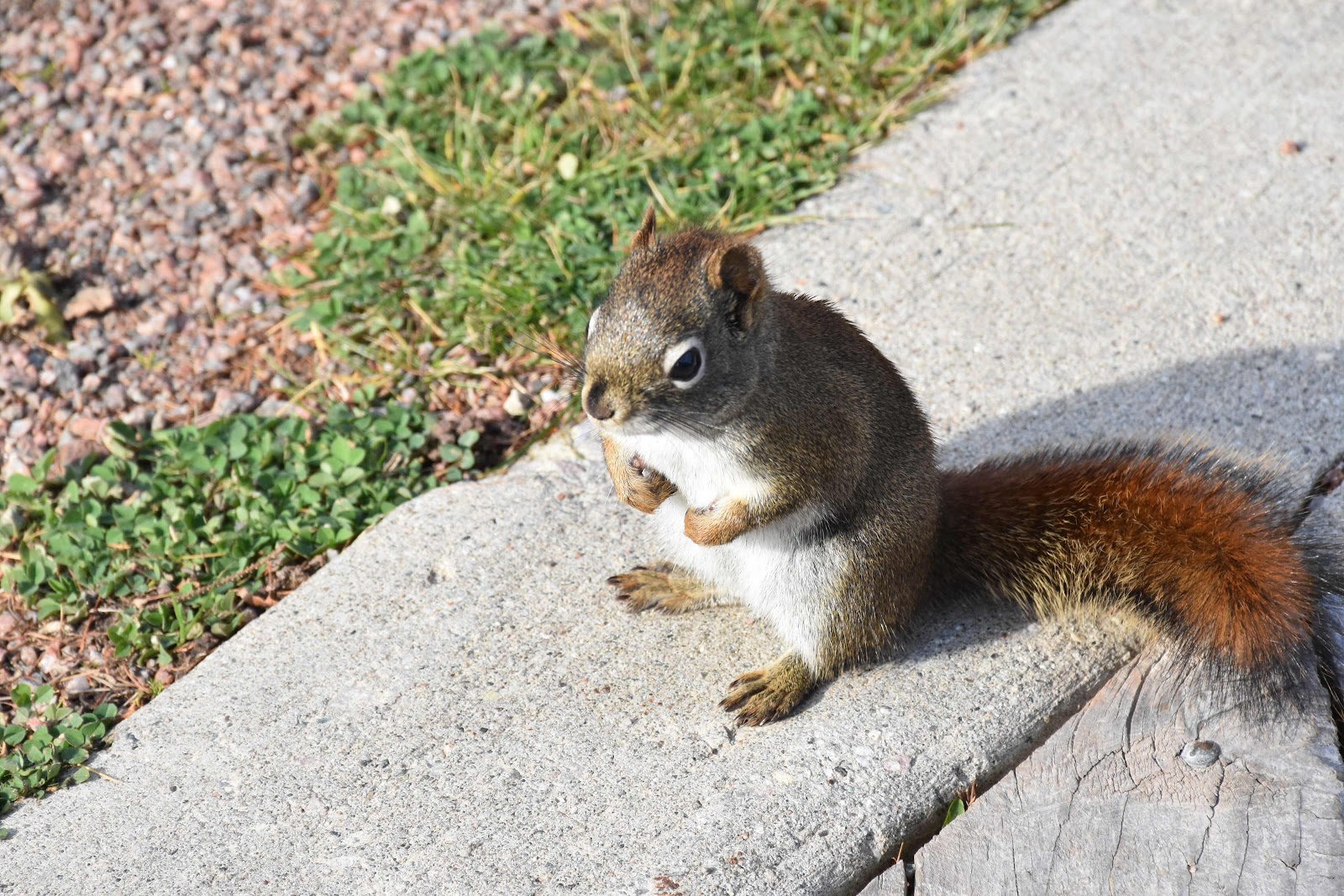 A blue jay, watching from a nearby tree, swooped in, scooped up the peanut and flew off.

I watched a single European starling among some branches. Rarely do we ever see these birds on their own. It was a young bird with beautiful markings. Was it lost? It was calling as if shouting to a friend. 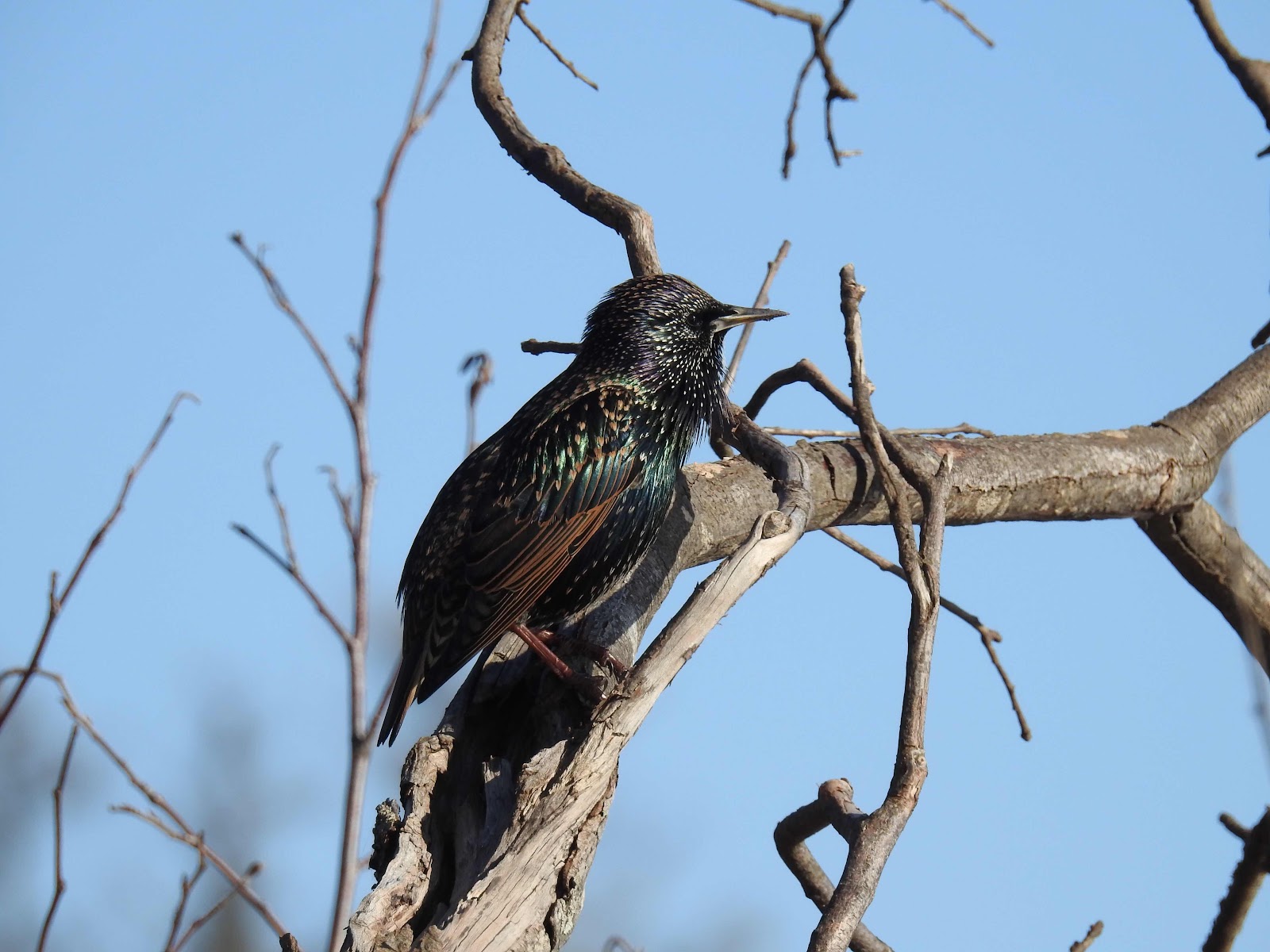 Further along the boardwalk, people had placed a beautiful double bird feeder in memory of a family member. 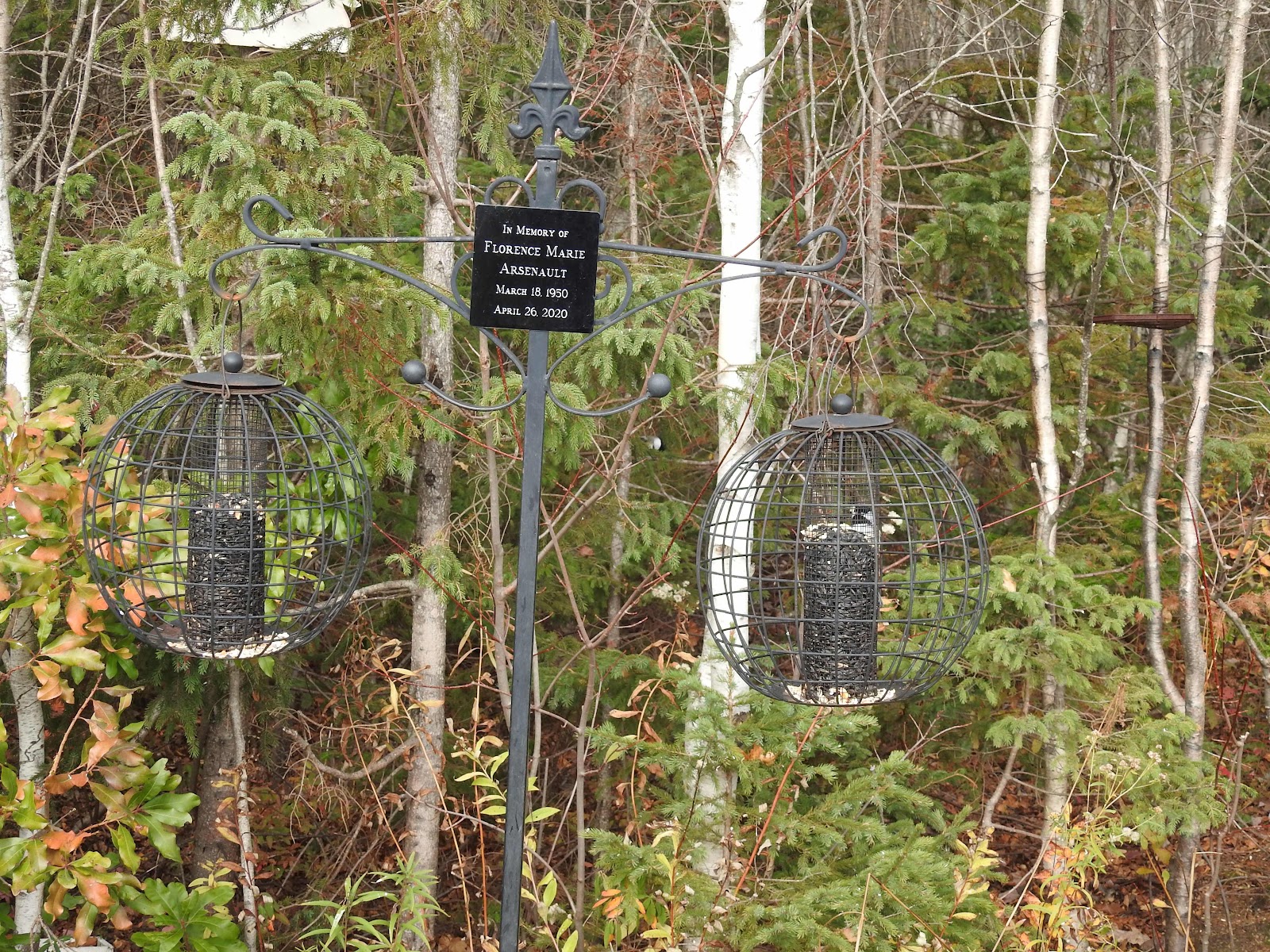 The little birds love these feeders. Black-capped Chickadees and Red-breasted Nuthatches have a feast while Blue Jays look on. 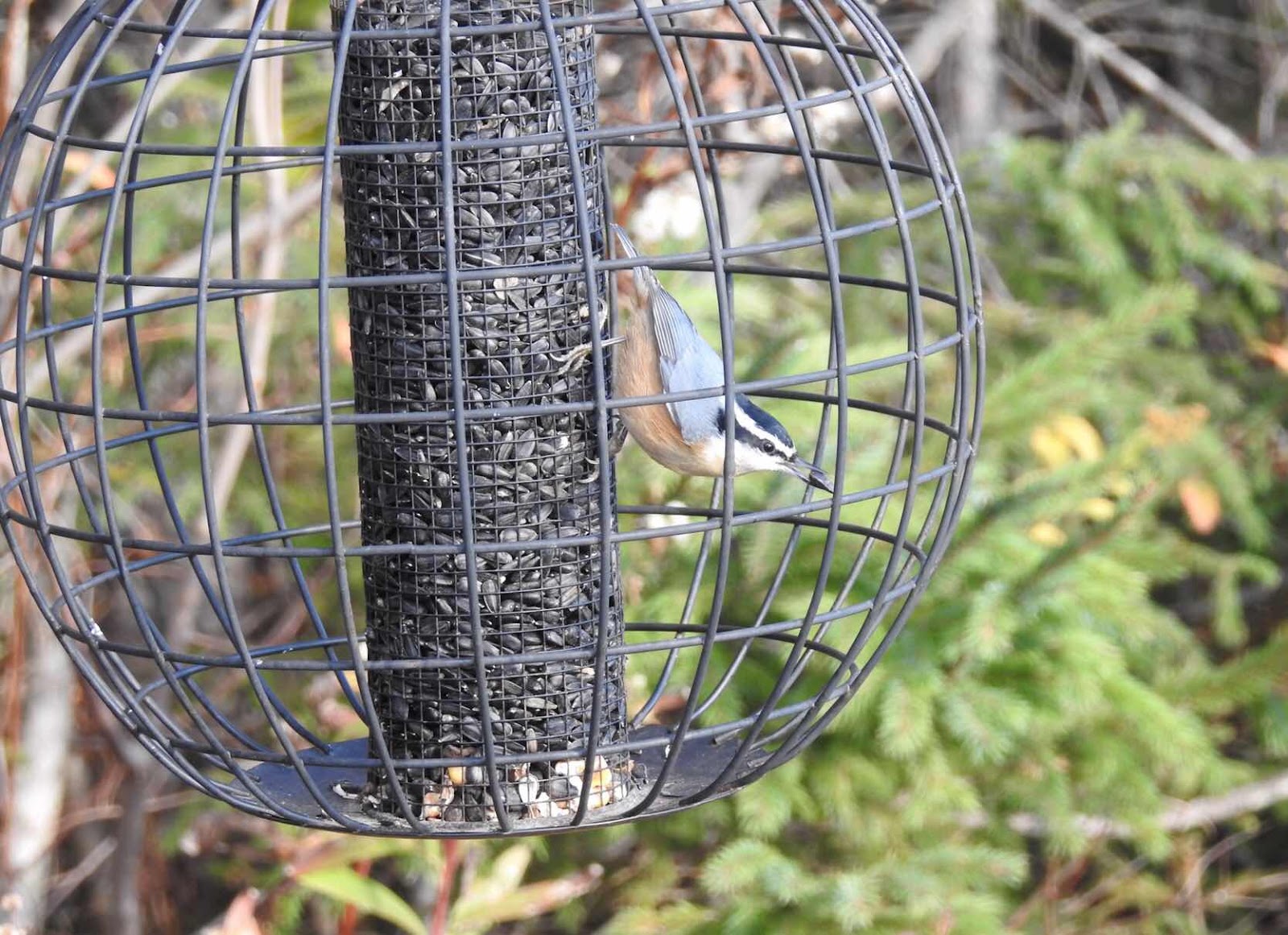 It is good to see the smaller birds feasting rather than being driven off by the jays who watch everything. 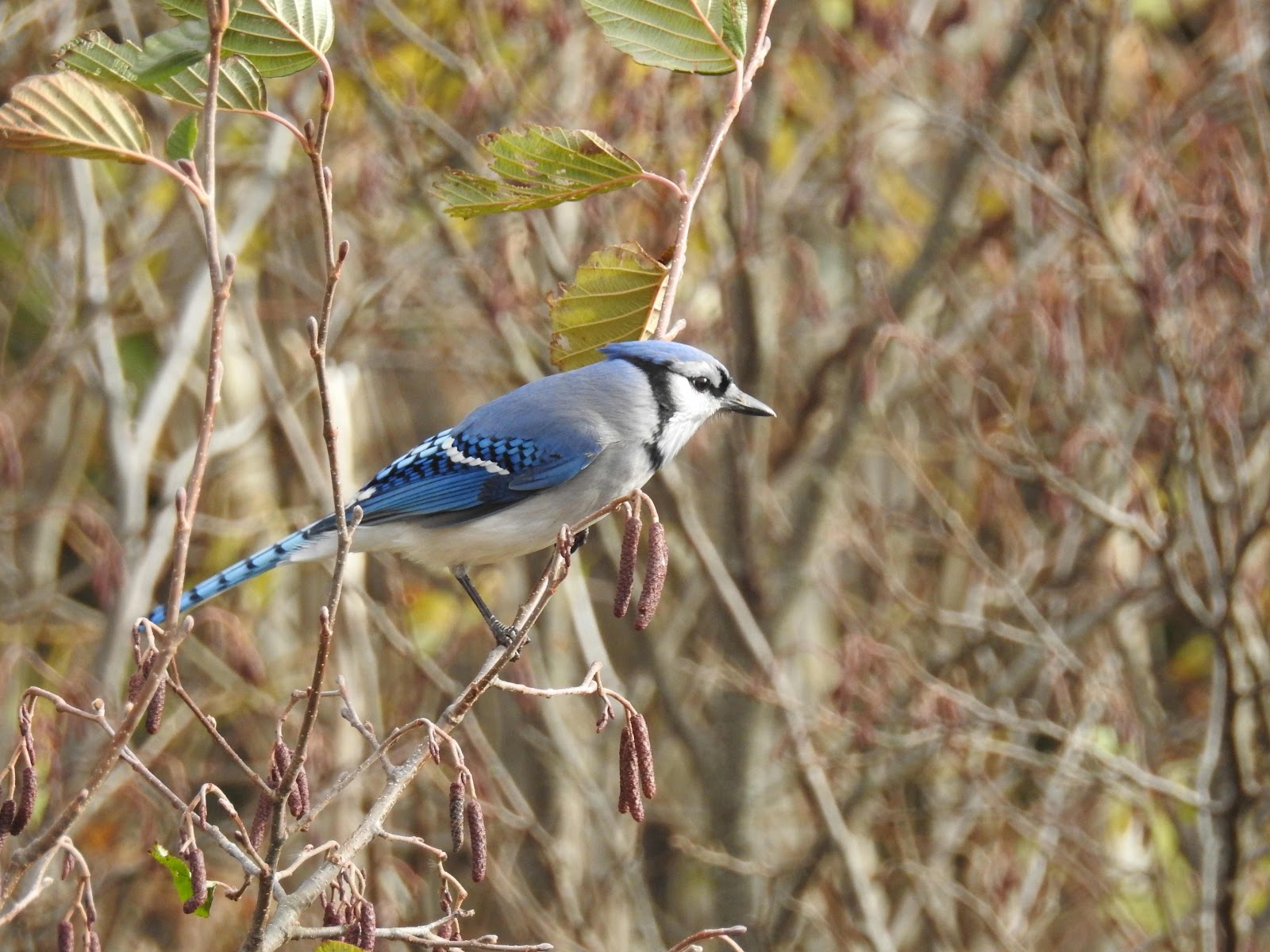 Wonder what the squirrels think of this new feeder?

I love all the critters today. That shot with the peanut stealing blue jay is an amazing capture Marie!

Great captures! I too really like the first blue jay shot. So glad to see those cages that allow the little birds to feast while the blue jays watch. :-)

Djan is right about the first blue jay shot - what a stunner.
I really like that memorial to a loved one too. It sounds like a wonderful way (and place) to be remembered.
Yet another lovely post.
Thank you.

I like the look of that bird feeder, I hope it would thwart the tree rats around here.

Stunning photos.
The bird feeder is really attractive, and what a great way to allow the smaller birds to feed unhindered.
Loved the little chickadee coming into land :)

That's a really cool bird feeder. It's bright and sunny here too. Think I'll take a walk today. Love your photos as always.

All the birds keeping their eyes on the prize and waiting for an opportunity to come in and visit the feeder. It's wonderful that the smaller birds can just fly on in without being hassled by the bigger birds. Great capture of the landing bird, very cool. Enjoy your day!

Its so much fun to come here and see all your terrific photos of the beautiful critters.
Love the anti-Blue Jay feeder..they must be so frustrated..HaHa
Sue

A grand collection of little characters. The squirrels are drawing up plans for a daring raid on those feeders right now.

Wonderful bird feeders. That is a neat picture of a chickadee coming in for a landing. Or was he just high stepping along the rail?

We can see these critters over and over again and they are still interesting.

How long until the squirrels find their way into those feeders?

All that wildlife is good to see. I enjoy watching the birds and their antics.

The first photo of the glittering sea, is a great introduction to the many wonderful photos of the birds and animals you are so lucky to see regularly.

I always love a view of the water, beautiful capture. Awesome birds and photos. The Chickadee, Nuthatch and Jays are favorites. Great outing. Take care, enjoy your day!

Wonderful walk. A great variety of birds and you got some terrific photographs. Those Blue Jays are just being Blue Jays and surviving in the only way they know how. They are handsome, bold and brassy and I admire them and always enjoy seeing them. Fortunately they visit my backyard every day.

Your photos are always stunning.

I do enjoy sharing these walks with you Marie, the critters you encounter are so different to mine 💜

Hi Marie: My niece Wendy read your answer on my blog but didn't know she could just click on your blog name to answer it so she posted this on my blog and I'm passing it along to you. I hope you 2 will meet at some time post pandemic...

"Marie,
I’m Wendy who lived in St. John’s from 1964-1966. I was 10 when we moved there. I remember singing to the album of Nfld folk songs that Rumbolt conducted. To this day, I can remember “Jack Was Every a Inch a Sailor” and “I’s the By”. I’ve been trying to get back to Nfld over the past two summers. Once Covid subsides, I’ll get there. The nicest people on earth and such beautiful scenery. Since the 1960’s I’ve measured fish and chips against those I had in Nfld, and none have ever compared! And I’ll never forget when the Portuguese fishing fleet would sail into the harbor, the men repairing sails up in the rigging, and playing soccer on the docks. ☺️"

Some great photos there and the Jays are beautiful. Keep safe, Diane

And in such a lovely area.

oooooh i love that feeder, i need to get one. your images are fabulous today!! my deck is about gone and the birds in my yard are going "nuts"...hehehehe, pun intended!!

i, like others, am not a fan of starlings, but boy is that image gorgeous!!

Oh you made my day with these lovely images dear Marie :)))

loved each shot as you know how to photograph sooo well :)
loved the story how these pretty blue jays send away other little friend :) it happens everywhere :)
blessings!

Your shots of the birds are excellent...specially the Blue Jays. (I almost called them Bluebirds...if I say something stupid, just ignore me!)