Temperatures went from freezing to 20 C and continued for a few days which allowed my husband and I to continue cycling. We headed to the east side of the Gulf Shore Parkway in the National Park in the centre of Prince Edward Island and rode with the southerly breeze at our backs. We had looked forward to riding in this area and thought we’d have to wait until next year but the weather co-operated.

We parked near Brackley Beach and rode along the first section of the parkway which lies behind the sand dunes. Stairs over the dunes were covered in sand 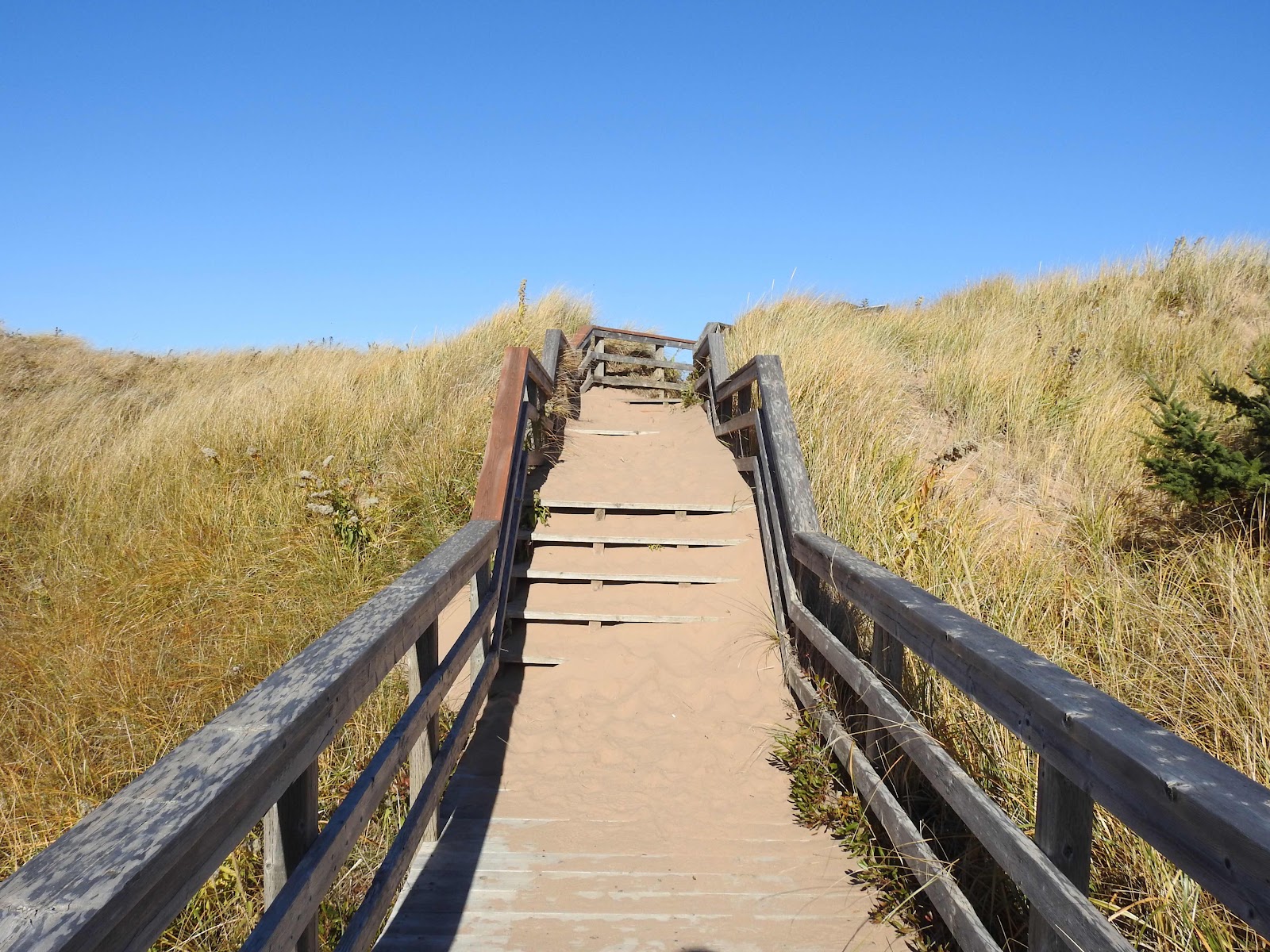 and the beach was almost empty but for a small group enjoying the sun. A bench by the stairs is a perfect location to sit and watch the riders. 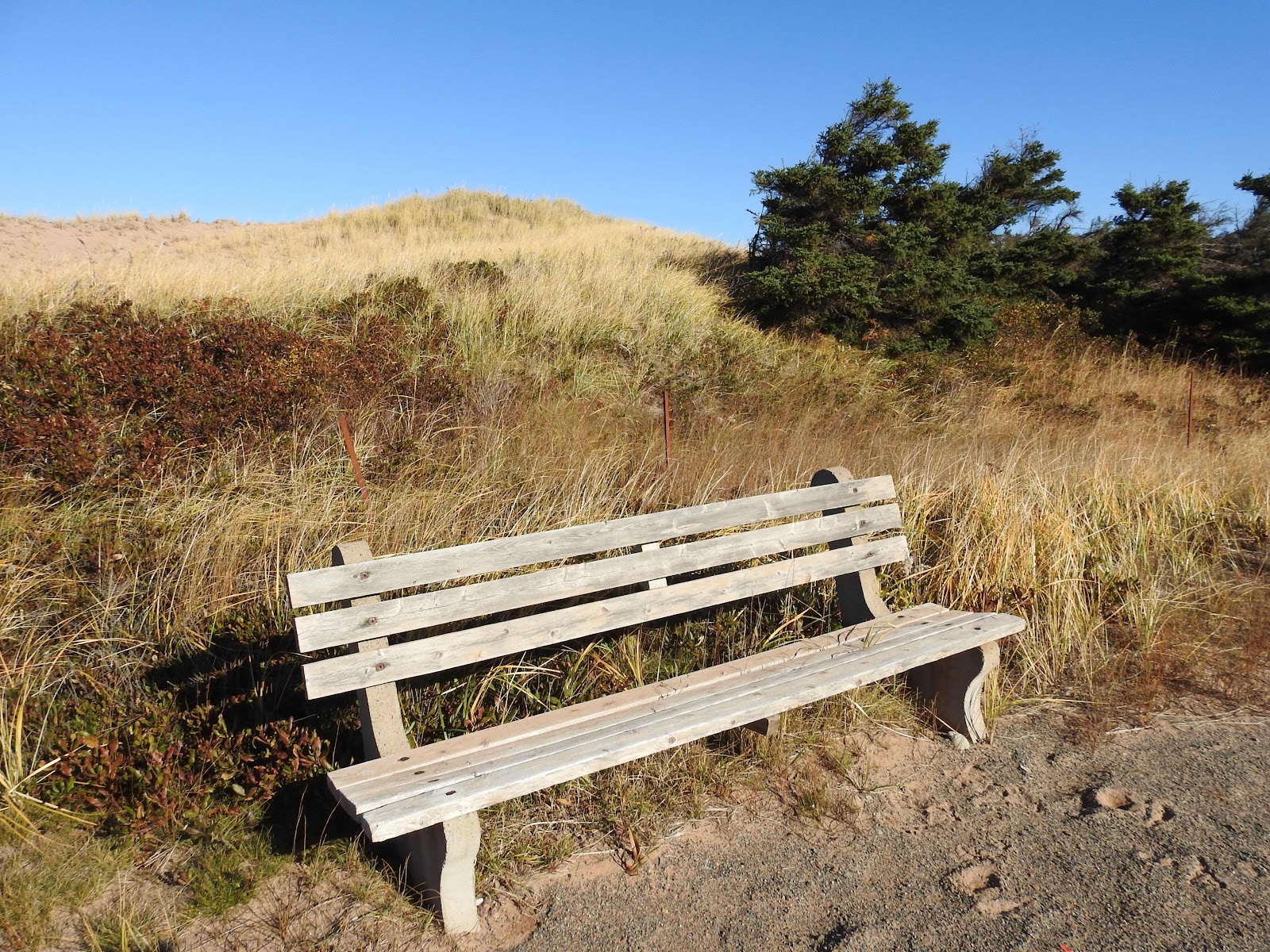 A surprising number of people were enjoying the warm day on their bikes.

Further along the parkway, the fishing port of Covehead, 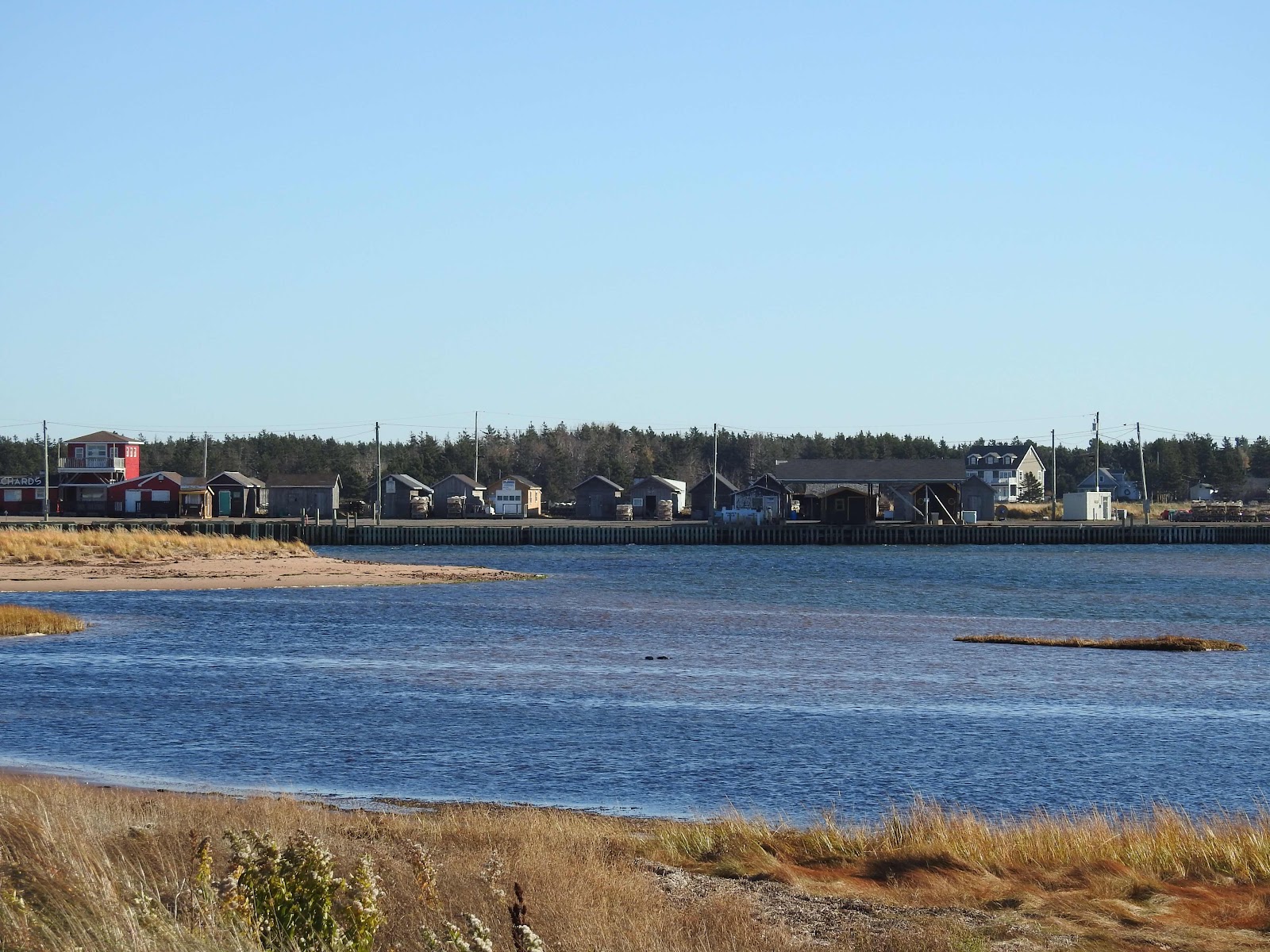 with its small lighthouse, sits quietly this time of year as the fishing season is long over. 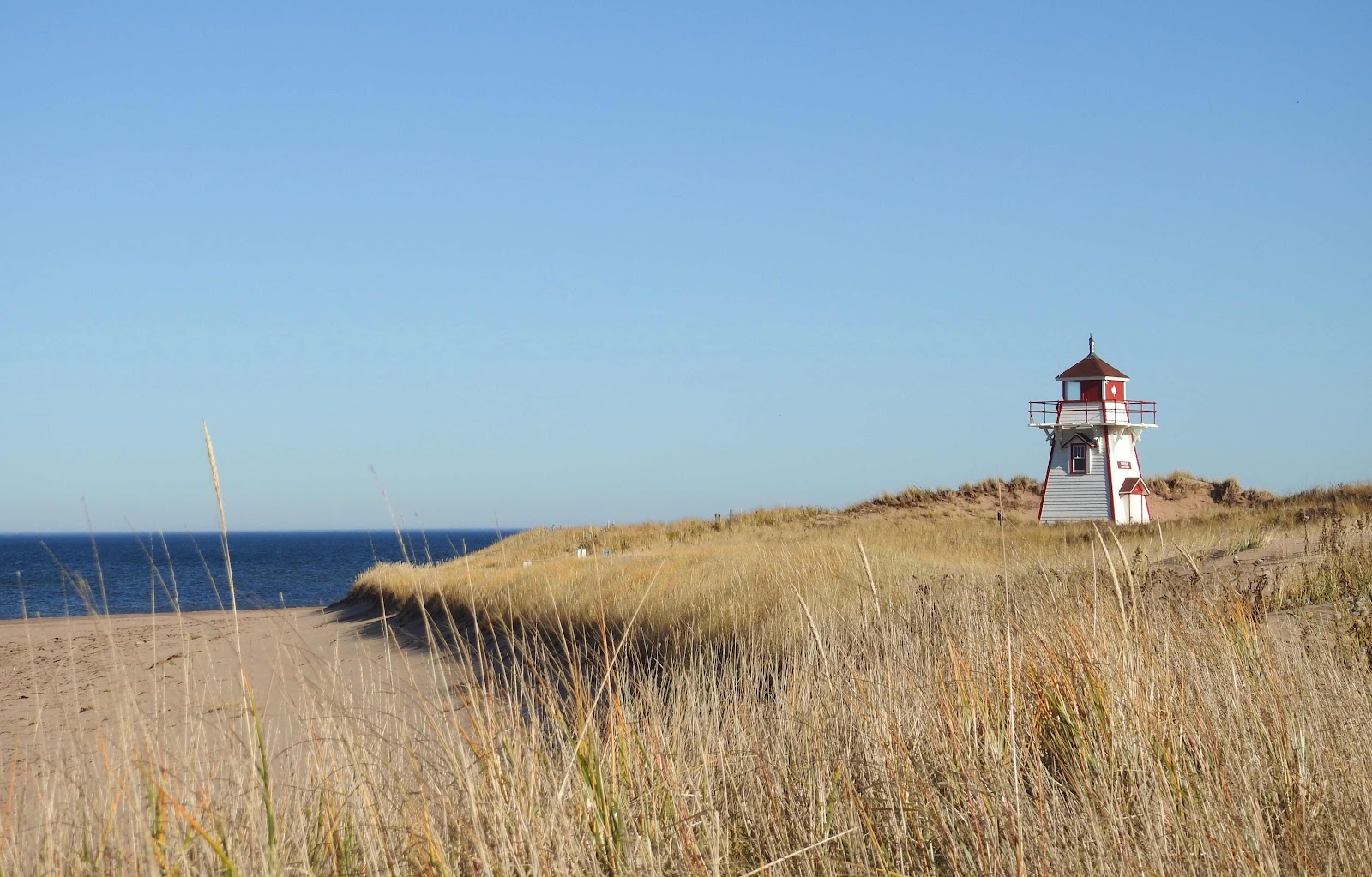 Further along the parkway, two ponds on the seaward side were full of ducks such as Mallards, and American Black Ducks which we see often. However, American Wigeons, 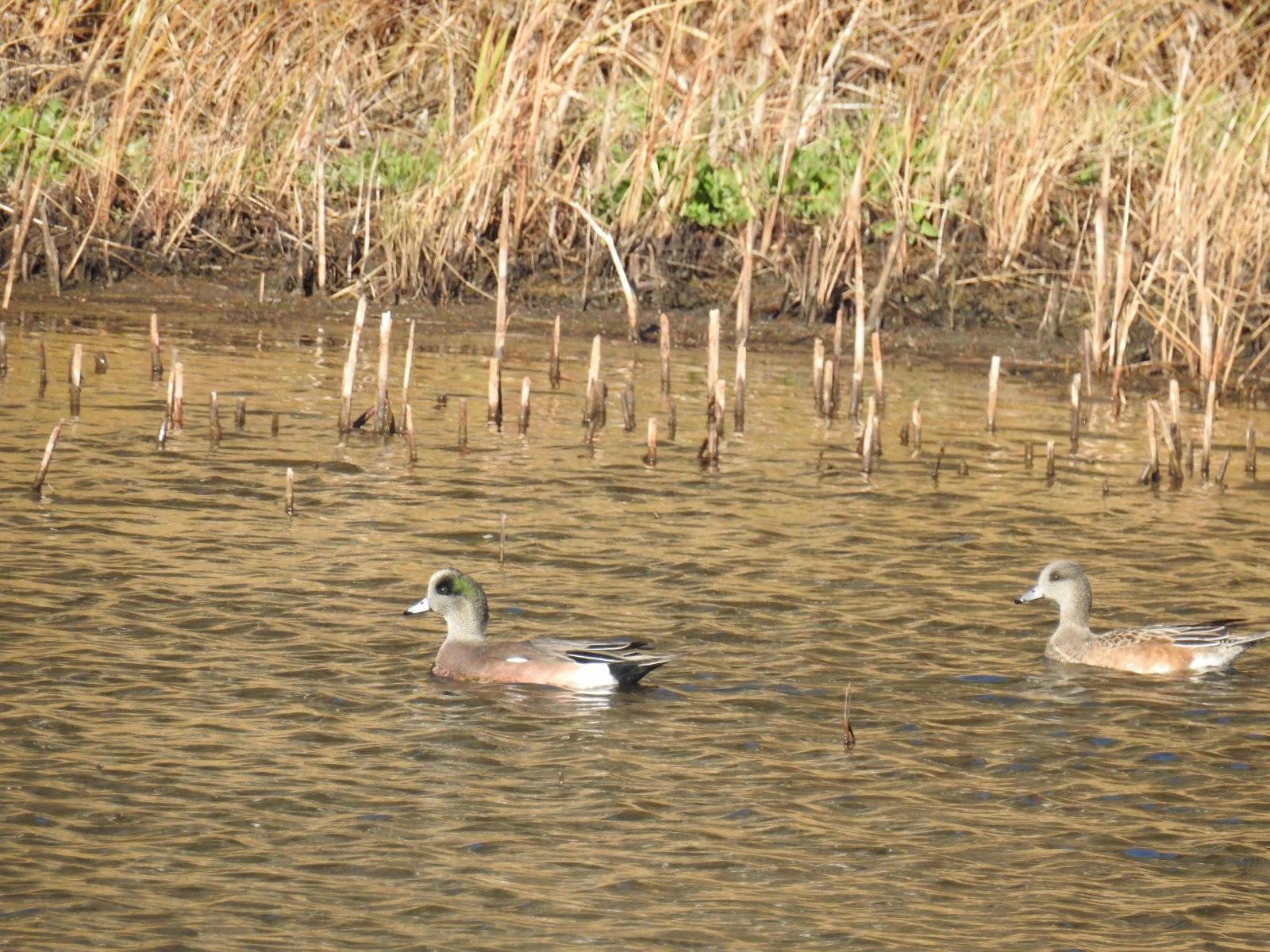 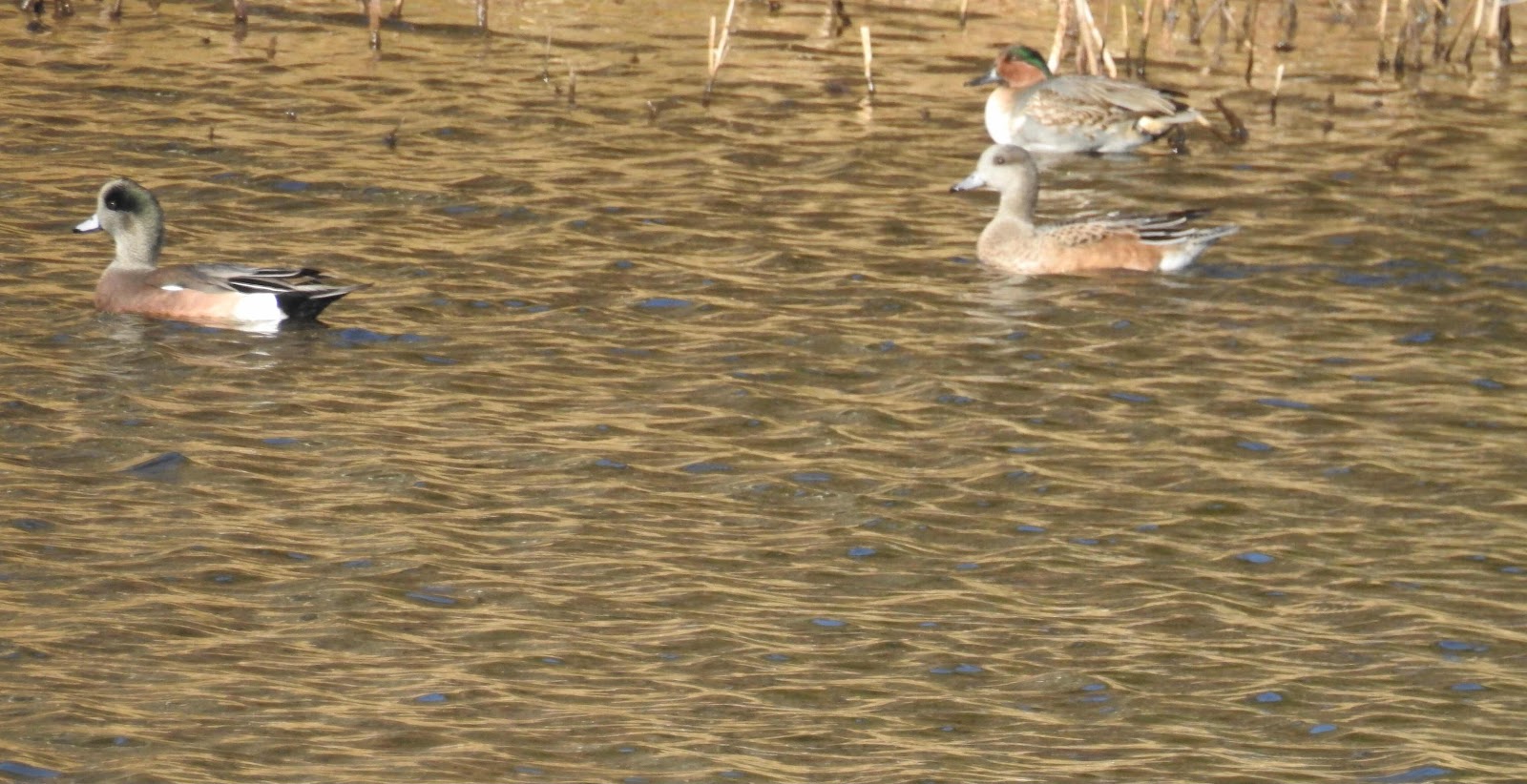 and a female Northern Pintail were unfamiliar ducks I was thrilled to see. At the Dalvay end of the parkway, we stopped to look over the beach before we turned around. It felt like an early September day. 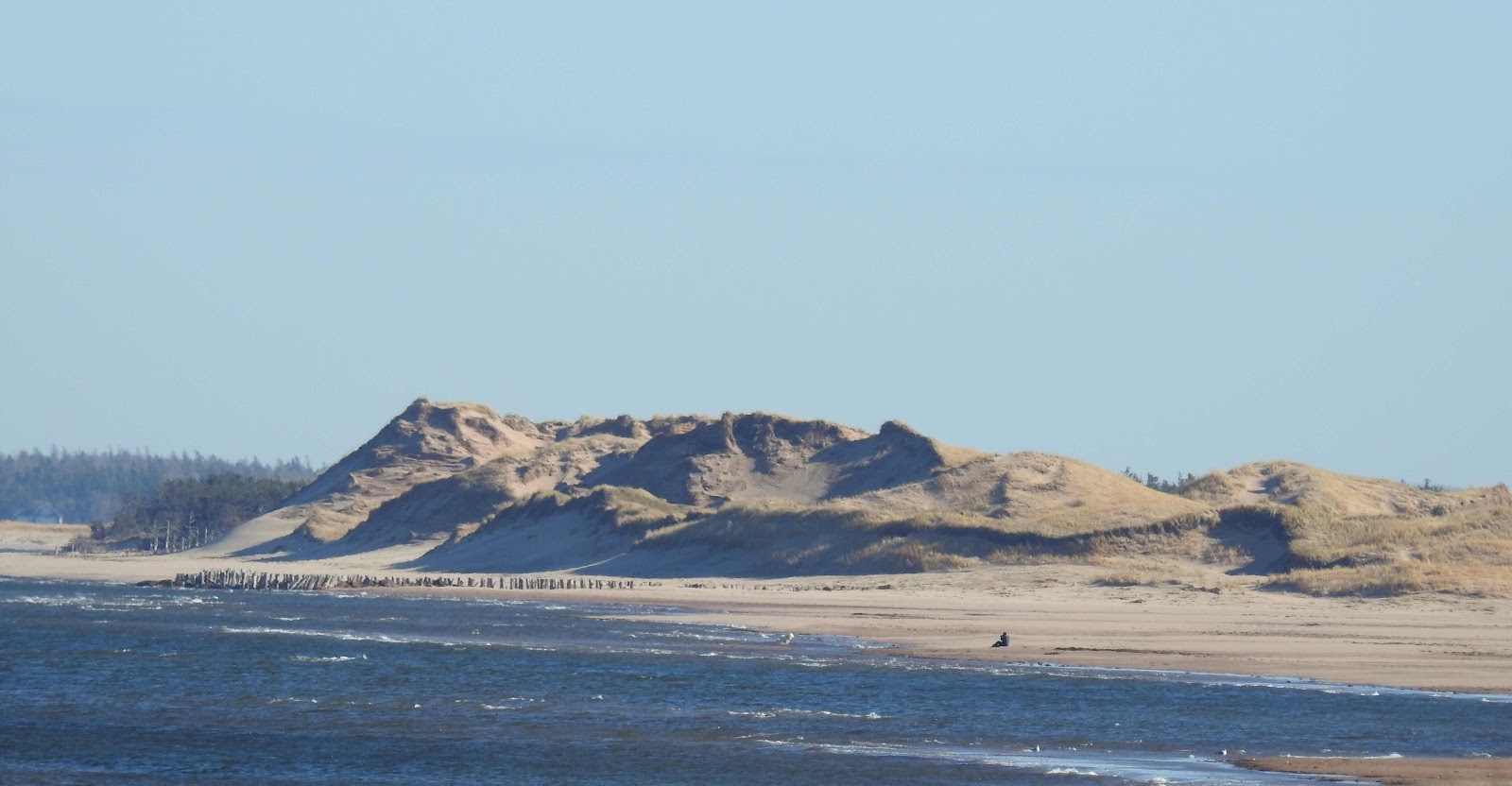 On the way back, riding into the wind was more of an effort but the parkway is a beautiful ride and we used peddle assist.

We stopped at the Covehead lighthouse again 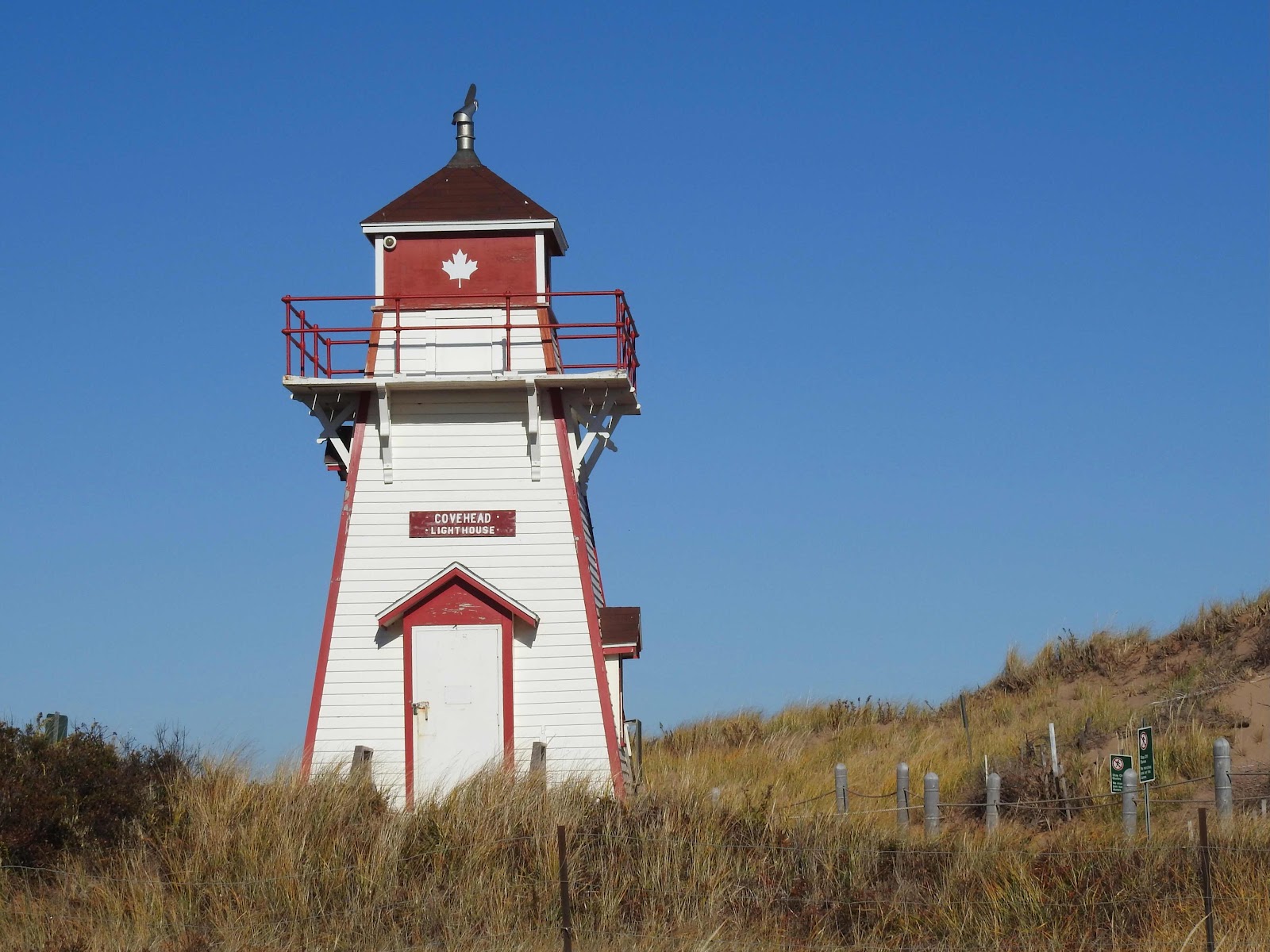 for another view of the coastline. 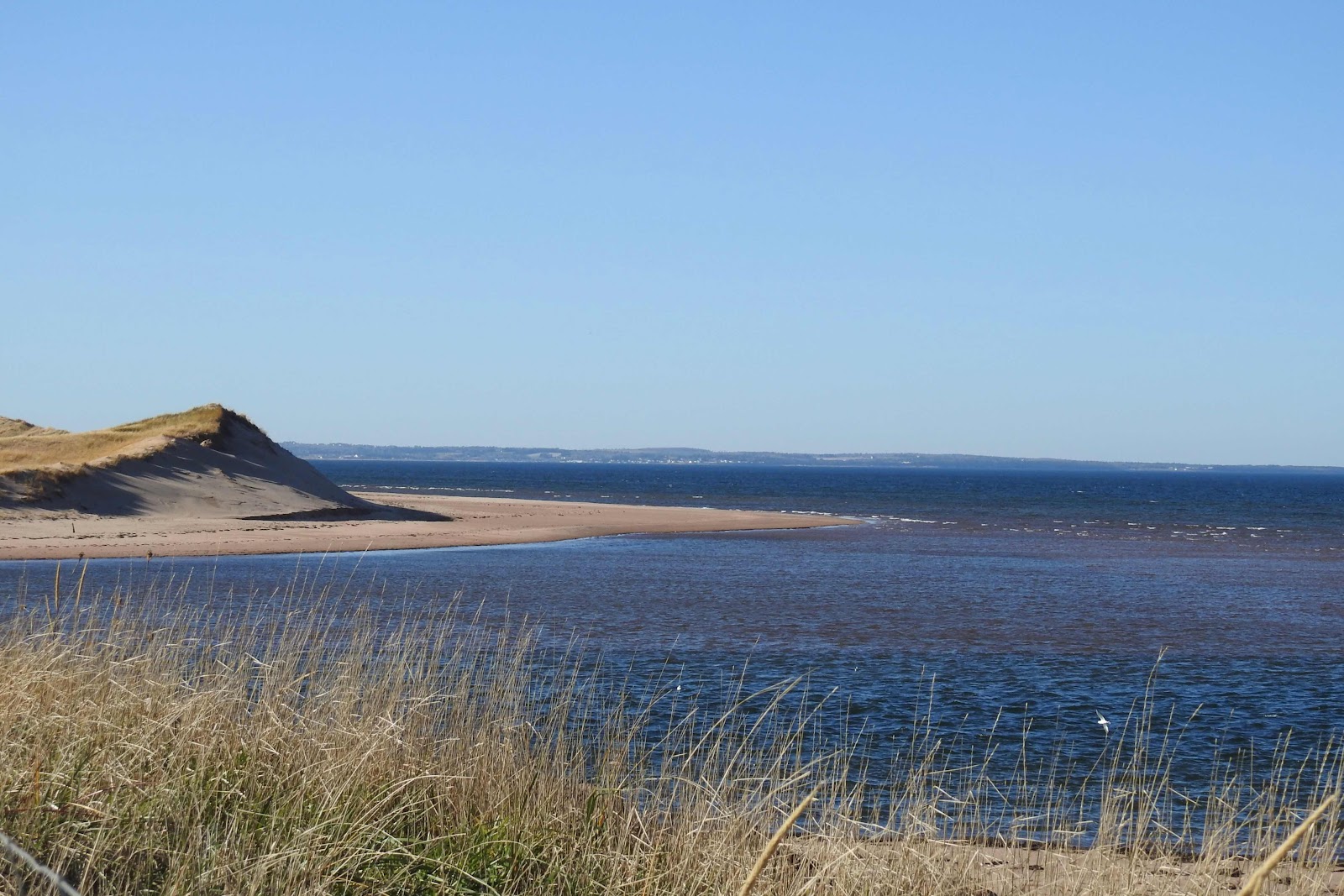 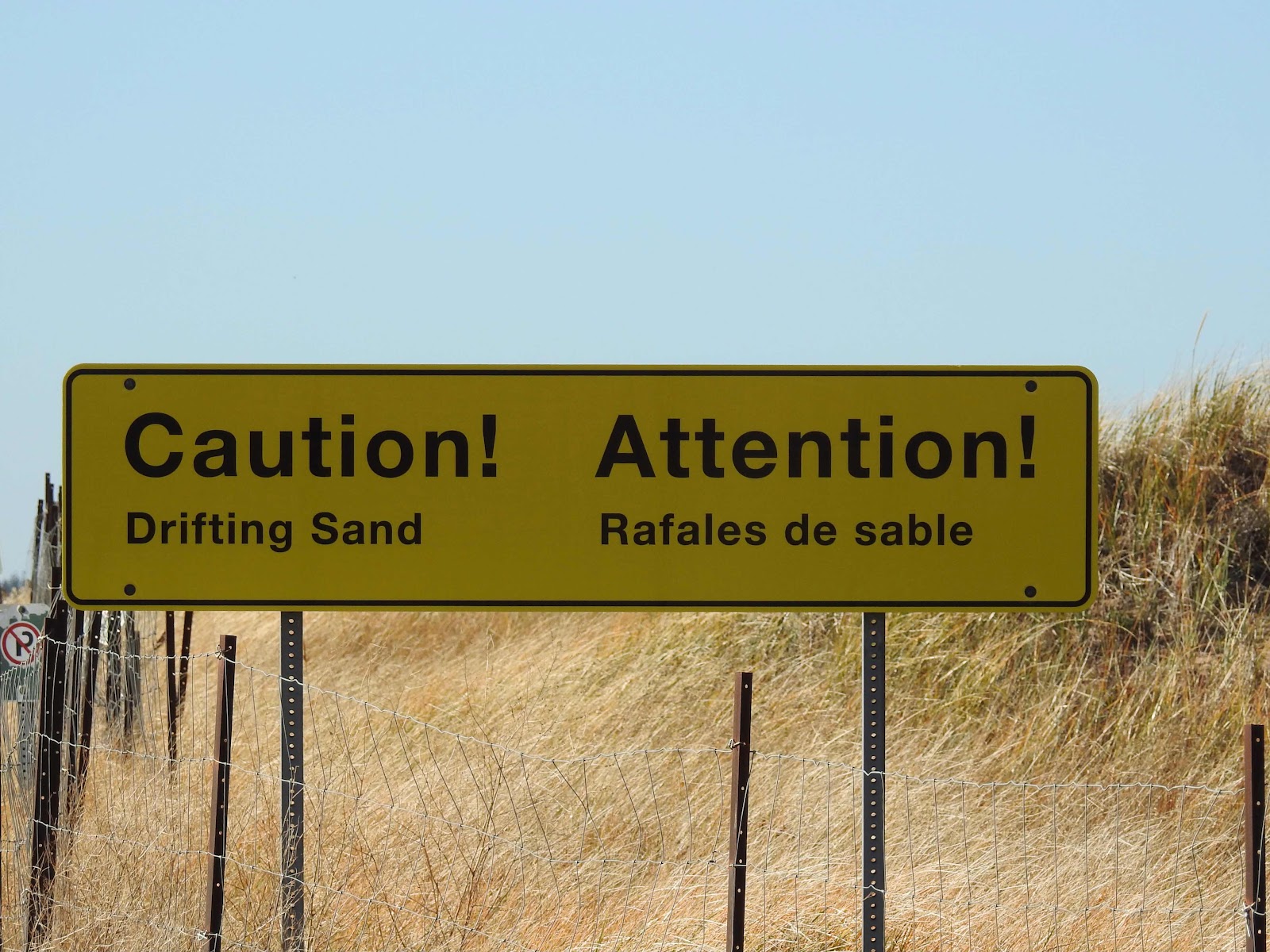 While we couldn’t see or feel any sand blowing around, when we arrived home, our hair and faces were gritty. Such is this November on the island.

Are you sure it's NOVEMBER?

All that sun and blue skies made me just a bit envious. Even when we don't have rain (not often these days), we rarely have such gorgeous skies. Love all the pictures!

A beautiful day at the coast. It's always nice when you get a sunny and blue day. I love lighthouses and that is a nice one. Enjoy your day and thanks for sharing these wonderful photos.

You always post the post beautiful photos! I'm so glad you are still able to get out for your rides. Enjoy the rest of the week :)

I am thrilled that the weather gods allowed you to cycle for a bit longer. And equally thrilled that you took us along.
I suspect that the wind blown sand served at the kind of debrasion which is frequently sold in expensive jars as a 'beauty aid'.

THese were some beautiful views.

That beach makes an appealing walk.

What a glorious blue sky day. Thank you for sharing it, with your wonderful images. I thought I had spotted a seal on the beach of the 8th image. Zoomimg in, perhaps a photographer getting his best shot of the log pylons.

It is wonderful that you still get to cycle some days. Did the sand on the steps come from wind blowing it there? Love that last view of the lighthouse. And the other views as well.

You can get access to the lovely and unusual ducks. Love that! Glad you had goo biking weather!

We had the same besutiful weather for a few days. Beautiful pictures, remind me of our visits.

I smiled at your sign as well, after seeing how the steps were covered in sand. It obviously would not take Nature very long to completely bury this manmade structure if it was given the chance.
Thank goodness for peddle-assist!
Have a great day Marie :) xx

I am glad that you got some final (I assume) rides in.

Good for you for getting out there and enjoying a good ride.

I loved this post. For a brief moment I was there taking in the blue sky, the water and the ducks. I like the ducks and love light houses. What a perfect ride you had.

You have beautiful places there to ride your bikes. The views of the coast and beach are lovely. Great captures of the ducks. I love the pretty Lighthouse. Take care, enjoy your day!

AS always such a beautiful place and lovely photos.

I love the wonderful views of the water and blue sky. The lighthouse is beautiful! Sand goes everywhere. It's almost like glitter. Glad you managed some outdoor time.

Great variety of ducks. Keep on looking there may be more!

Your part of the world looks so idyllic. Surprising to have such pleasant weather in November though, right?

the "sand in my hair" is something i have experienced too!!

you are seeing the same ducks that i am seeing, how cool is that!! i am glad you are still enjoying your bikes, and i really love the pedal assist feature!!

you must feel glad to reach east part of the island and found surprising things....

Have a great day

I wanted to reply about the comment you made on the little shy girl on the video on my post...I noticed her, too. She pulled at my heartstrings cause she reminded me of my older daughter when she was young.

The desire to revisit PEI is becoming stronger every day...