We ventured to the national park on Prince Edward Island twice in the last few weeks, both times urged on by the above zero temperatures and lack of wind. These were exploratory visits, to see if our favourite areas of the park were open and if a walk and a picnic were feasible to begin our outings for another year.

Two weeks ago, we visited the western section of the Park at Cavendish. Cavendish Grove wasn’t open but we parked along the road and I took a photo through the gate of our favourite area. It is there we spend a few hours every spring entertained by the spring peepers and several pairs of geese who return there to breed. All was quiet in the Grove that day. 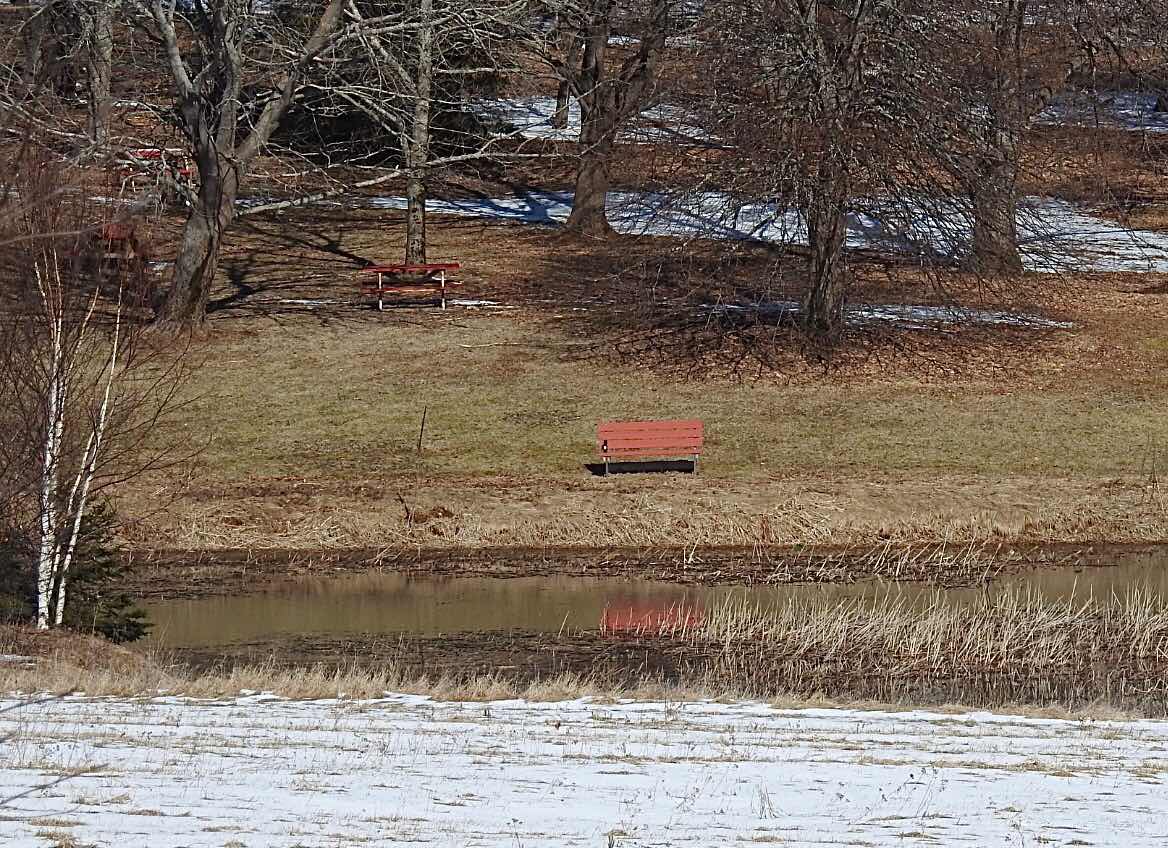 At the Lookout over Cavendish Beach, snow was still visible along the shoreline. The days of snow on the beach are numbered. 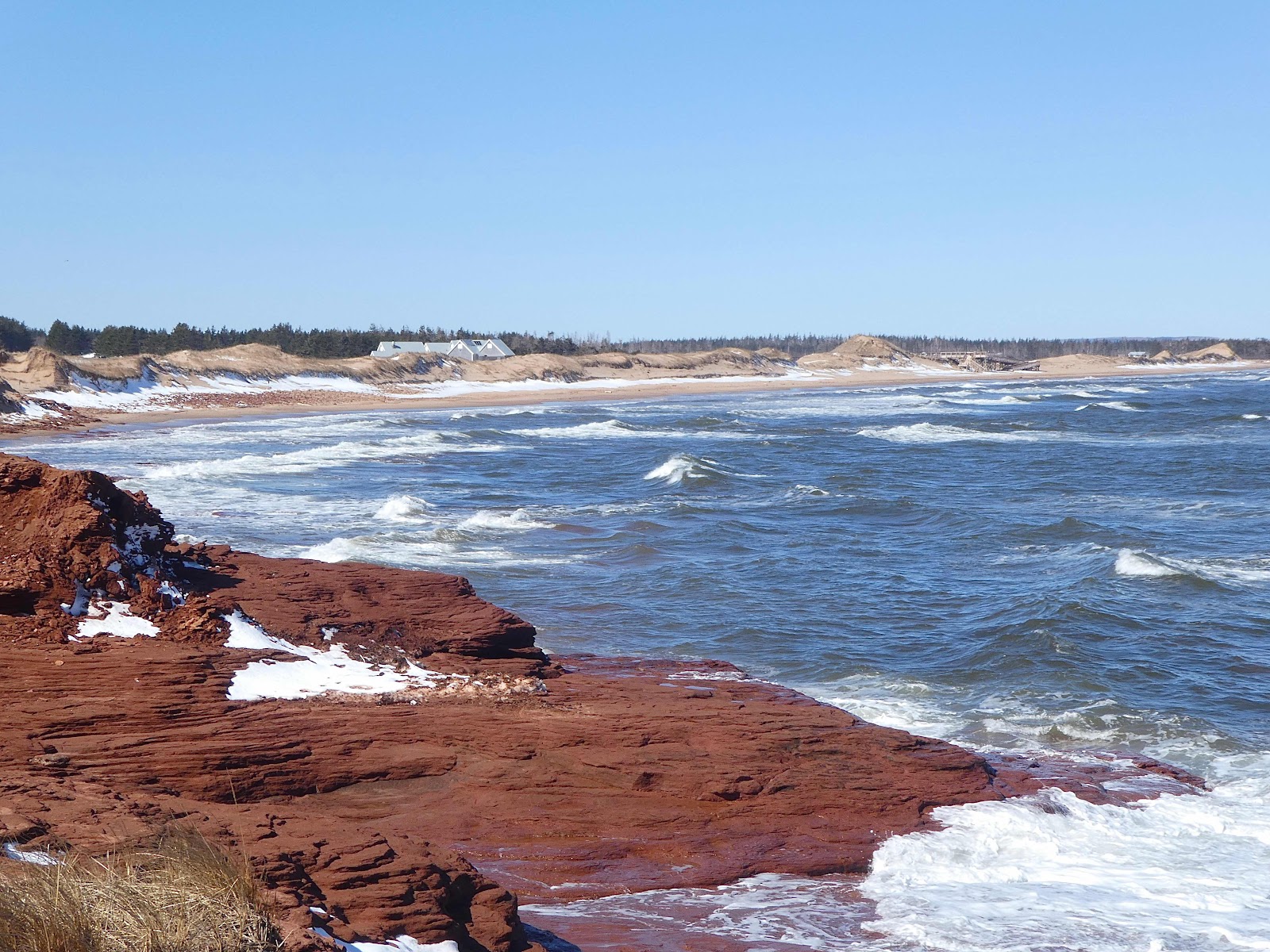 Several weeks ago, the Song Sparrows returned to our garden, singing with the advancing daylight outside the bedroom window as they will do for the next four months. Everywhere we go, these melodious little birds are singing their hearts out, as they were that day by the Lookout. They are fast becoming my favourite birds. 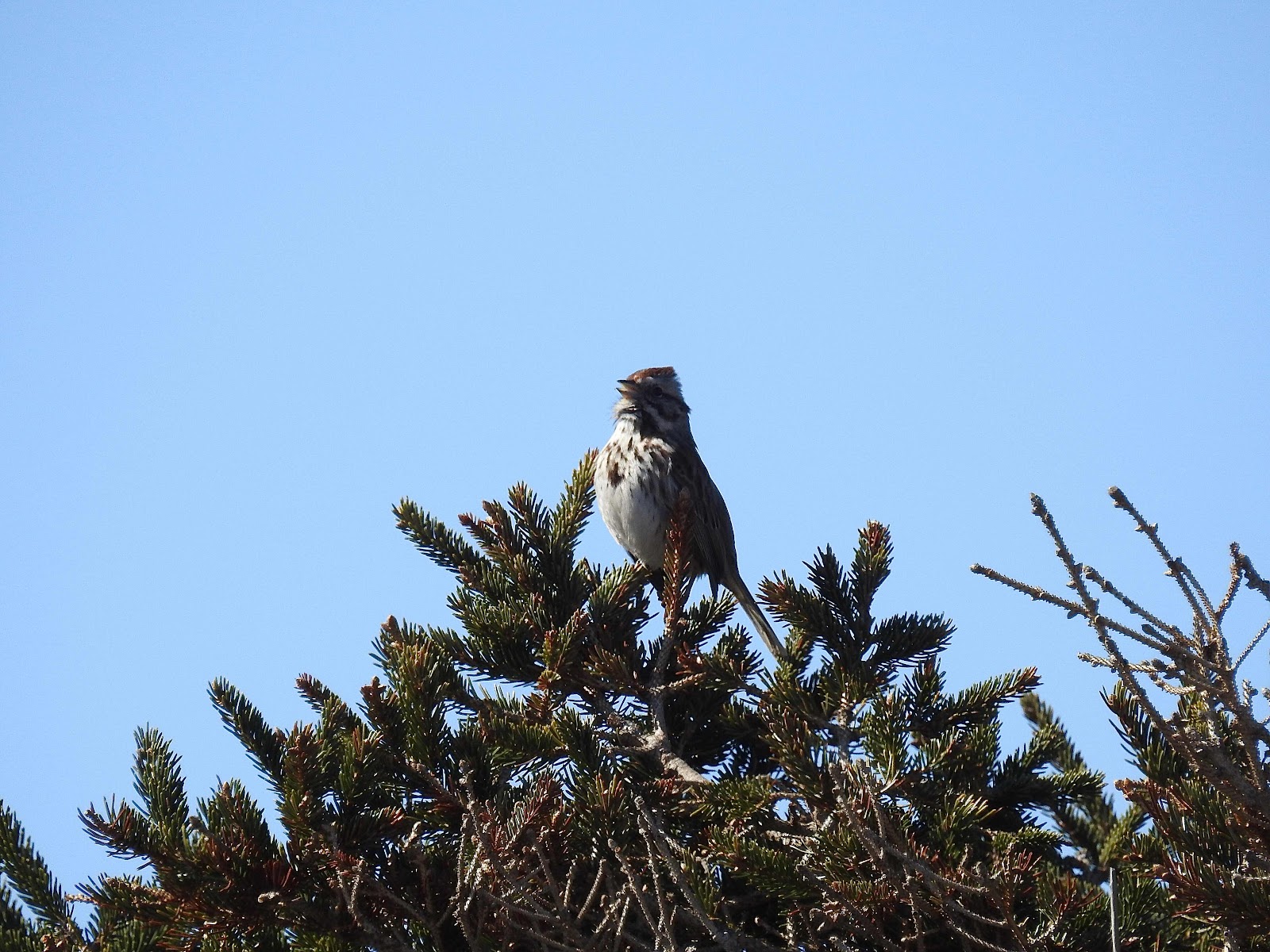 We stopped at MacKenzies Brook again where I took some photos of the ever expanding sea arch. When I took this photo, 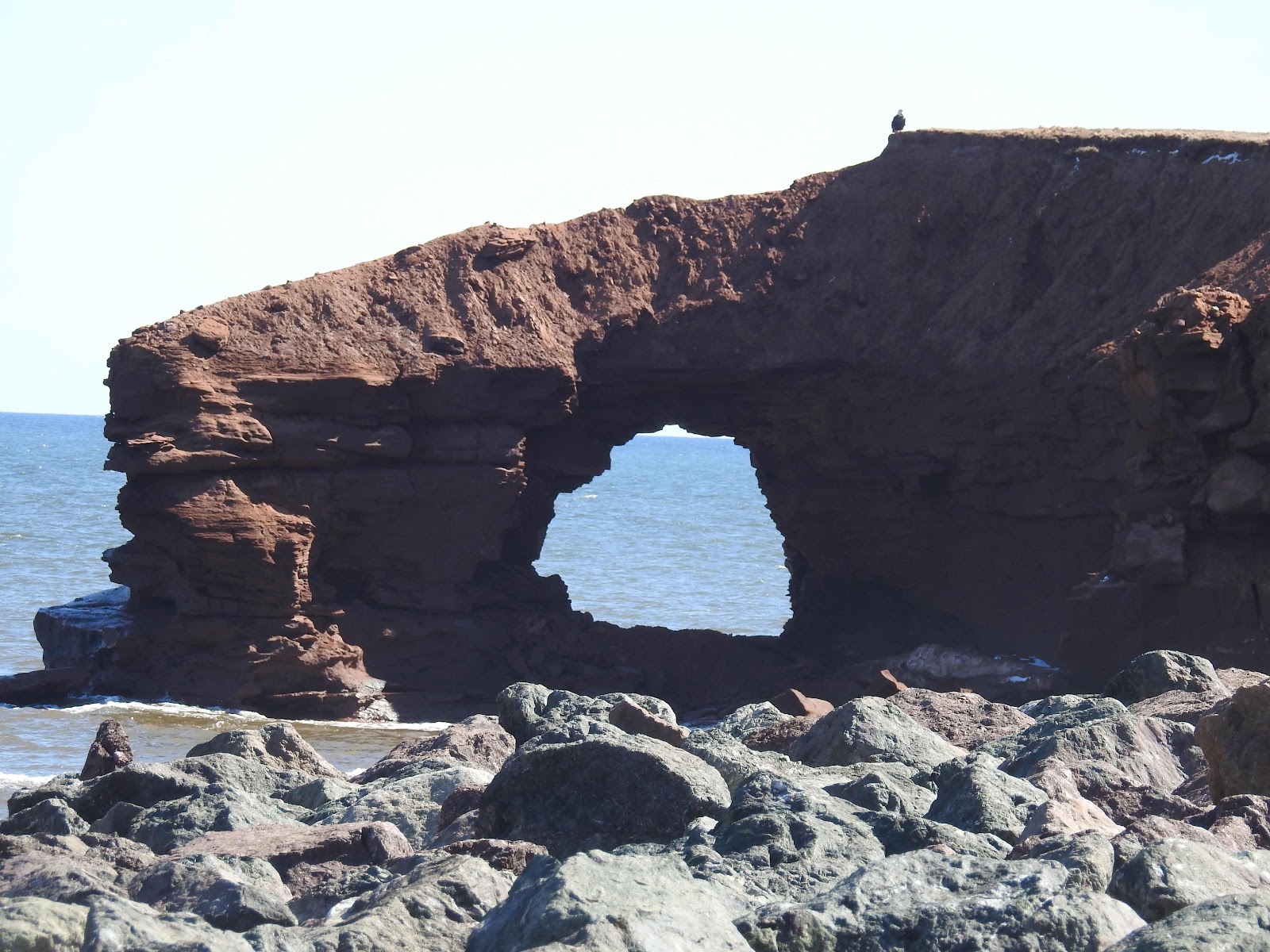 I was oblivious to the Bald Eagle stood in the upper right of the photo. On the way back to the car, the eagle flew overhead but this was the best photo I could capture. 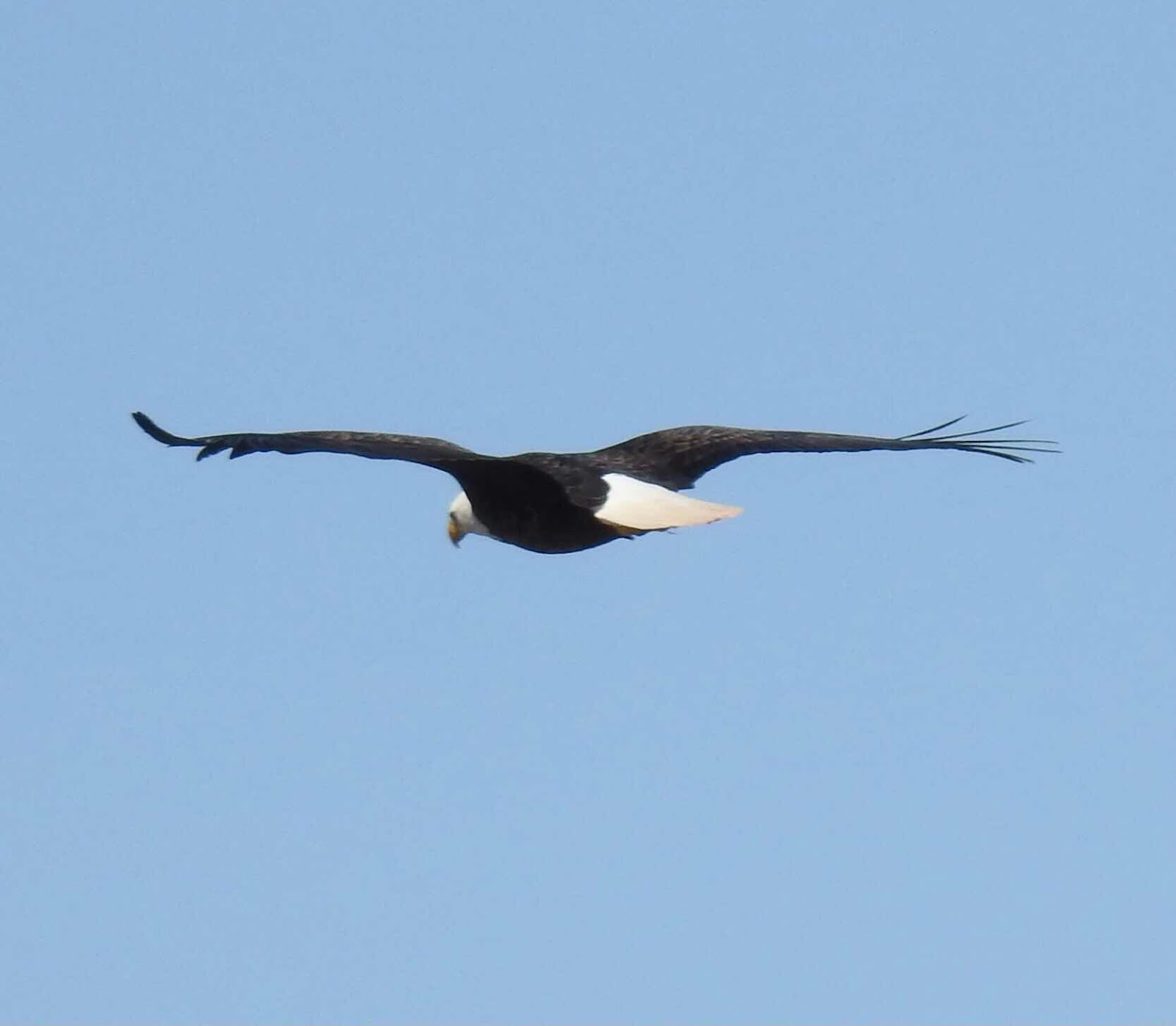 Finally we visited Orby Head and the Great Cormorants were back, some standing vigil at the Head already this year. 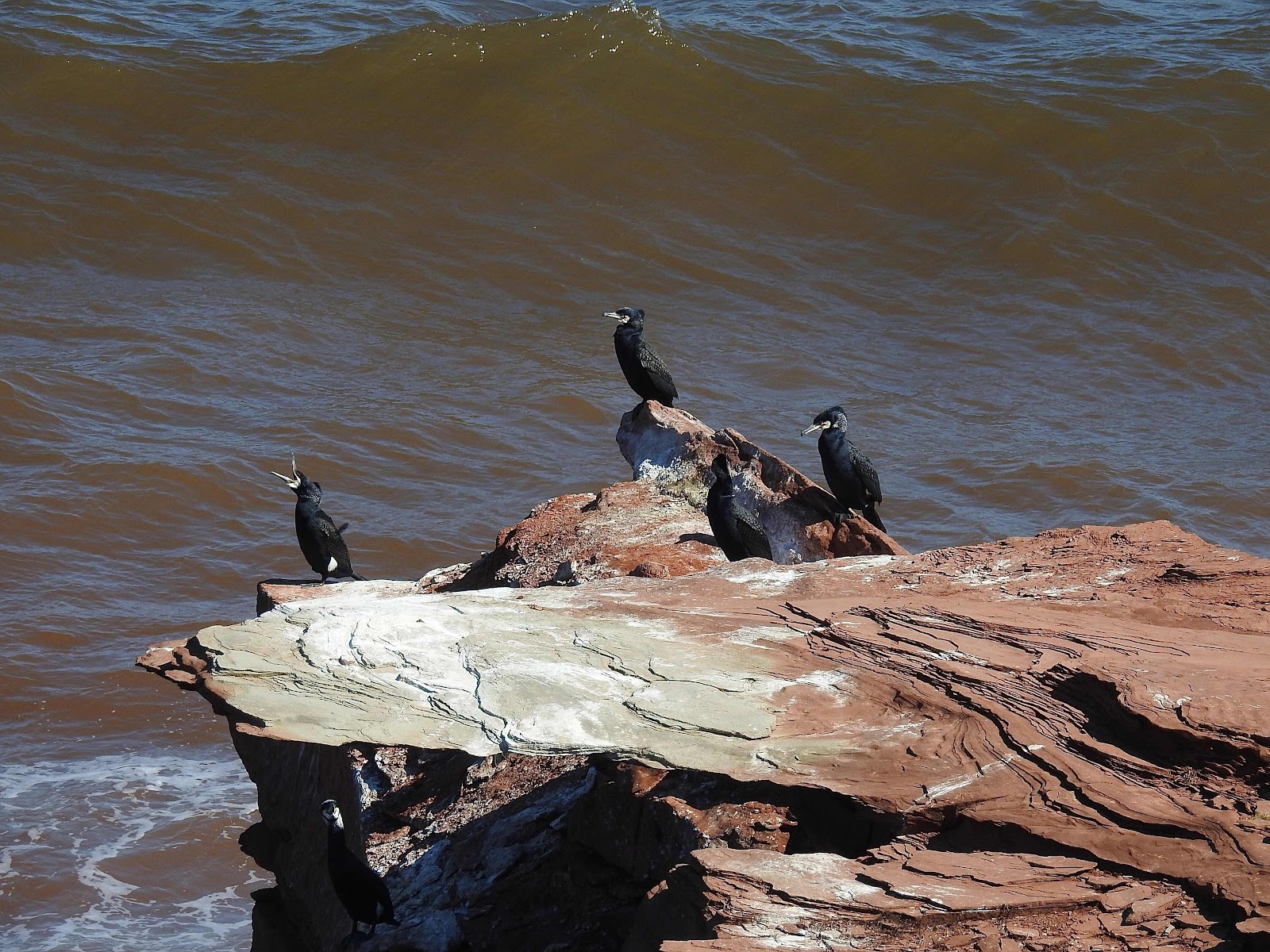 Can you see the five Cormorants in this photo?

We decided that if the weather was at all co-operative, we’d have a picnic at the park in the next week. Yay!

That sea arch is so impressive and beautiful!

It took me a while, but I think I found all five Cormorants.

That's a great picture of the Bald Eagle flying.

I have a lot of photos of that beach with my children as little girls and my parents, who arranged our trip to show their grandkids LM Montogmery lands. I loved it there, rolling waves, wind and all. And so did the daughters. Loved that your fine photos brought back the memories.

Is there a prize for the Find the Cormorant game? I love them, so primitive when they sit drying off their wings after fishing.

The sea arch survives another winter. That a perfect shot of the Bald eagle in flight. I did see the five Cormorants. Have a wonderful day and new week.

And a new season begins on your beautiful island.
Thanks for the tour and I did finally find 5 cormorants.
I do hope that the arch makes it through another year. Its so majestic.
Love the bald eagle too and of course those sweet song sparrows.
Sue

Lovely that you can soon be out and about more....

But please be careful.

I felt like I was venturing out with you ... it looked lovely but a bit too chilly for this old softie.

Gorgeous photos. You must be getting so excited - and I hope your picnic is WONDERFUL.

What an amazing photo of the bald eagle! Beautiful!

Lovely. Hope you get that picnic in the park.
That sea arch is beautiful.

Beautiful scenes. I love the sound of those spring birds singing.

Great set of photos well done. Glad that you warming up a bit. Keep well Diane

I love your birds, especially the eagle in flight, but it is your photo of Cavendish Beach, that I have fallen in love with.
Yay, for spring picnics, in your favourite places!

Lucky to catch that eagle.

The Song Sparrow's call is one the highlights of spring!

It took me a moment to find the fifth cormorant. :) That water looks cold with the snow on the shoreline. Brrr!

We're back in the snow, with more to come this week. The robin is back as are the sparrows so hopefully we'll see warmer weather soon.

The current round of bird flu is affecting wild birds. Ohio lost three eagles so far.

Hello,
I love the view of the beach. Awesome capture of the Eagle in flight and I like the Cormorants. The Song Sparrows are wonderful to have as a yard bird. I like their song too. Take care, enjoy your day and the week ahead.

having been there once, I am drawn to this post and these photos.

I love those songbirds, too. They are singing their hearts out here. I saw the eagle right away when I looked at the picture. Beautiful scenes, thanks for sharing.

The second photo is amazing. Beautiful scenery! It's lovely to hear that you can be outside.

The many joys of spring! Not long now and you will be out enjoying those picnics once more :)

I do need to get out more.
Coffee is on and stay safe

Your island is so beautiful. I hope the ever-growing sea arch lasts for a long while yet. I find the red rock/sandstone so striking. Beautiful eagle shot. Soon it's picnic season - hooray!

Thank you for these pre- visit glimpses of what is awaiting us. And the weather is getting warmer too! Yippee!

WE have some resident bald eagles which I see throughout the year, but they still fill my heart with joy.

It is time for spring to finally arrive.

As usual, your photos are extraordinary. I love the way you capture the everyday sites in nature. The photo of the bald eagle soaring in the air is special. Thanks for sharing.

Good for you, Marie, to check out your favorite spots to see if they're ready for a new year. I can imagine how these traditions thrill your heart and soul. I would love your Song Sparrows, as well as the bald eagles. What a great shot you got of it! It sounds like you're well on your way for new adventures this year.

LOVE, LOVE, LOVE the rock with the hole. When I look at things my mind always goes to painting or photography. That hole took me to photography. I can see doing a photo shoot with someone standing right in there for their photo. That water also looks nice. I have not been to the beach since 2018, thinking I will have to make a trip to the beach when I go to Calif in July.

Wow, that is an amazing eagle photo!

Just back from Italy where we were basking in temperatures in their 20s (centigrade I think). Home now and so cold I'm wearing a scarf in the house. The snow on the beach looks so beautiful.

What a beautiful arch!

I think I recognize that top picture from before with lots of leaves on the trees and the picknick table. I'm beginning to feel at home!

Great photos!
I had to really look to find the other Cormorant, but there it was in the bottom left corner.
Have a wonderful weekend!

Great photo of the Eagle flying!

I think I see the 5th cormorant. That is a wonderful shot of the eagle. Just thinking, I do not know what kind of call the cormorant has, so I am off to look that up. I did enjoy all your photos.

the exploratory visit sounds serene and beautiful dear Marie ,i particularly loved the song sparrow image ,looks divinely taken from some fascinating spring story book when i read your words along :)

what a marvelous photo of bald eagle !

Hooray for you, having yours cut very short, to let it grow out in the grey!!! Life will be so much simpler, you will wonder why, you didn't do it sooner!

Just look at those ladies, in my post! They are gorgeous, and sure of themselves and just plain great looking!!!

Wear your natural hair, with attitude and sureness, and you will have age-appropriate-Vanity, in spades!!!!!!!!!!!!!!!

What awesome photos! I really love the bald eagle photo.

Prince Edward Island has always been on my bucket list, but somehow I never made it. My husband and I loved traveling, but once he passed away it felt as though my travel days were over. Consequently, I very much enjoy seeing your pictures. I can live vicariously through you.

Awesome eagle picture! We leave for our great eastern adventure in two days! Although it will be about two months until we get to PEI we are beyond excited!

Love the photo of the arch and the eagle. I love shots that have surprises when I see them on my laptop.