An overcast day with a slight cool breeze on the north shore of the Prince Edward Island made it comfortable for a walk on the boardwalk in North Rustico. 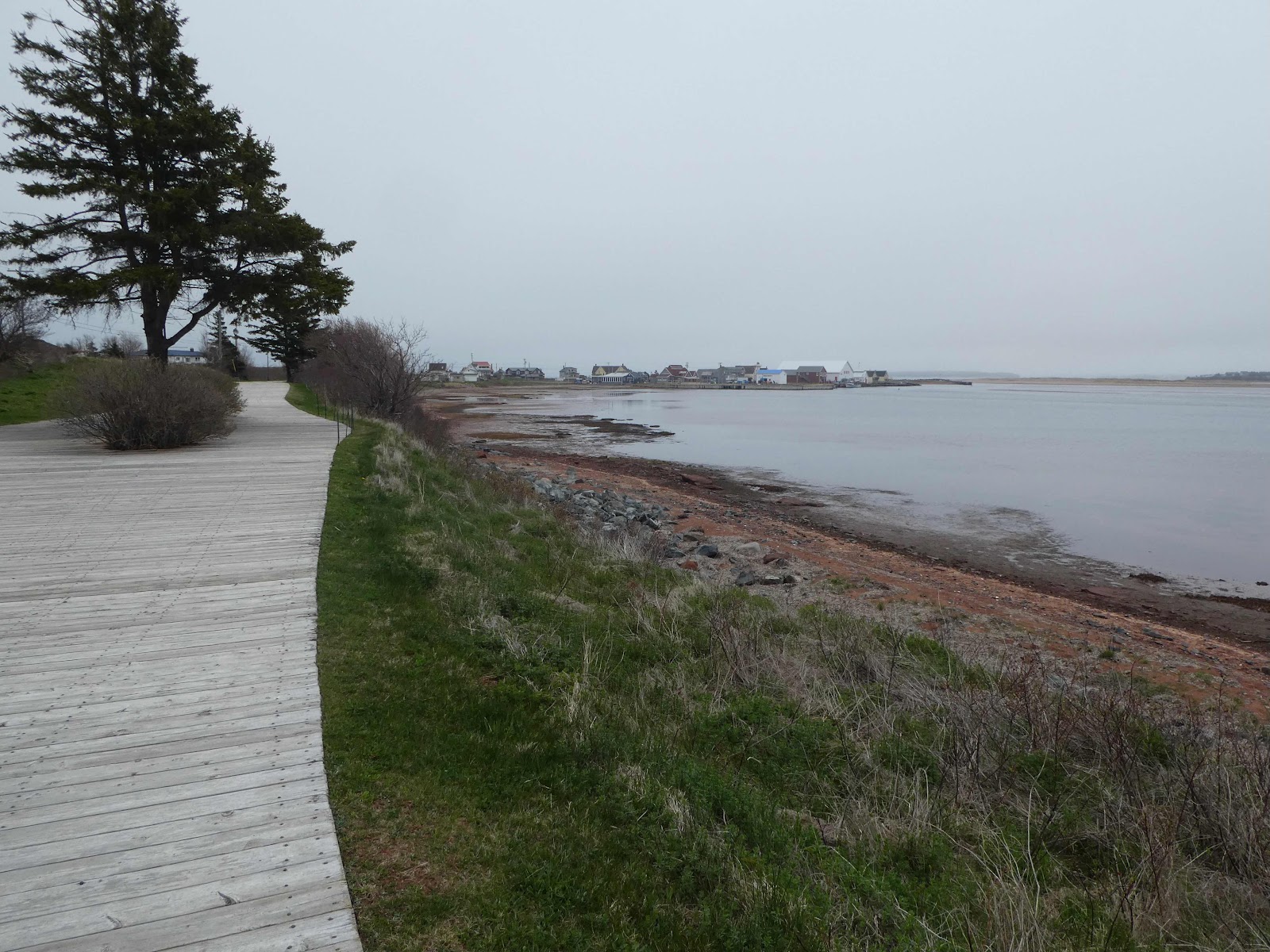 Then my husband and I went to nearby Cavendish Grove for a picnic as the sun came out. By chance, we met Miriam and David, who had come back to visit the Grove. David is a fellow blogger and both birders visited PEI last week. It was great to catch up with them after some extended time on the island. Afterwards, my husband and I headed east to French River and beyond to the lighthouse at New London.

French River was in fine form with the lobster fishery underway and the boats tied up at the wharf or returning from the day’s work. 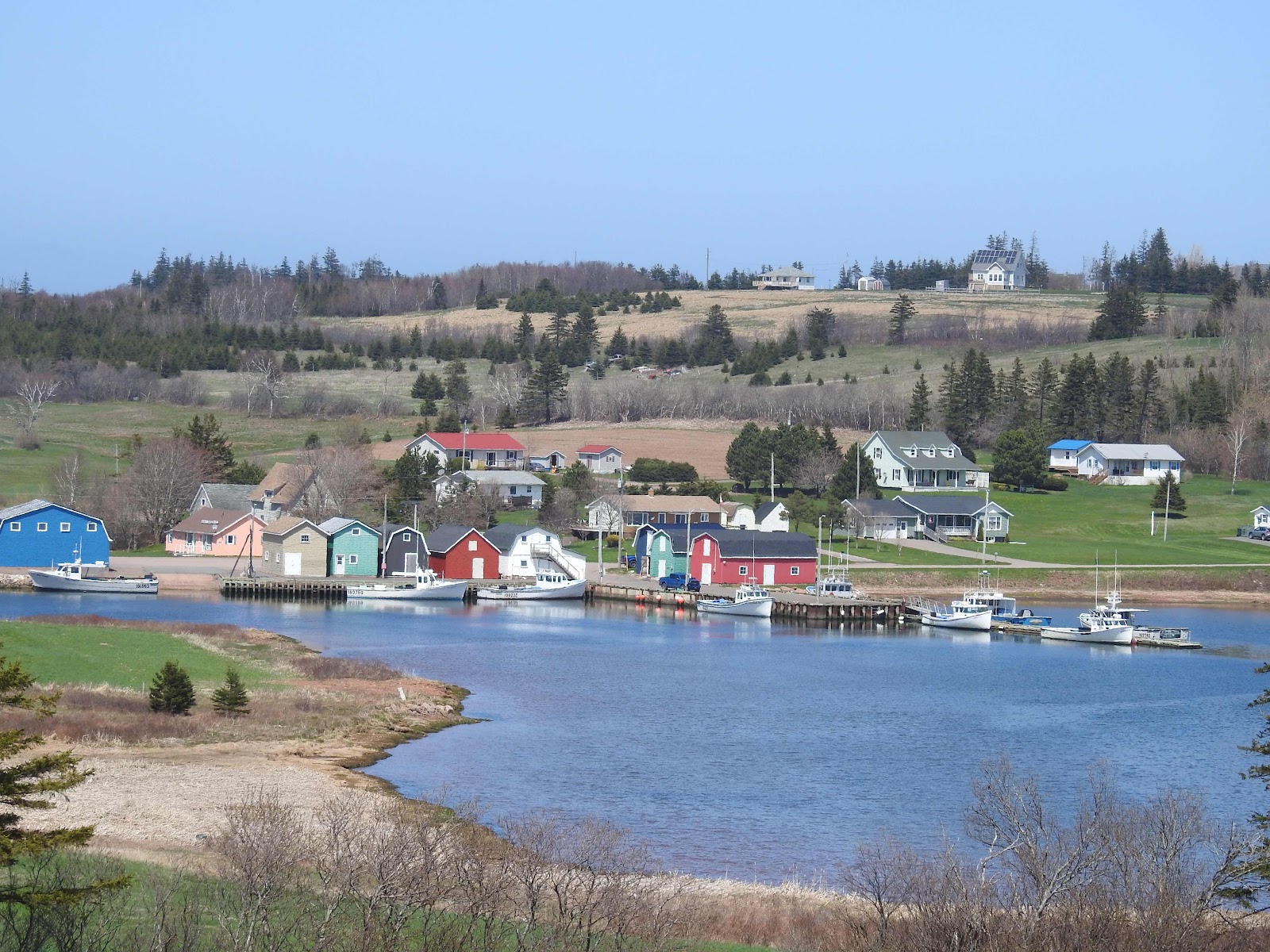 Nearby a Lesser Yellowlegs, the first I’ve ever seen this time of year, was busy feeding. 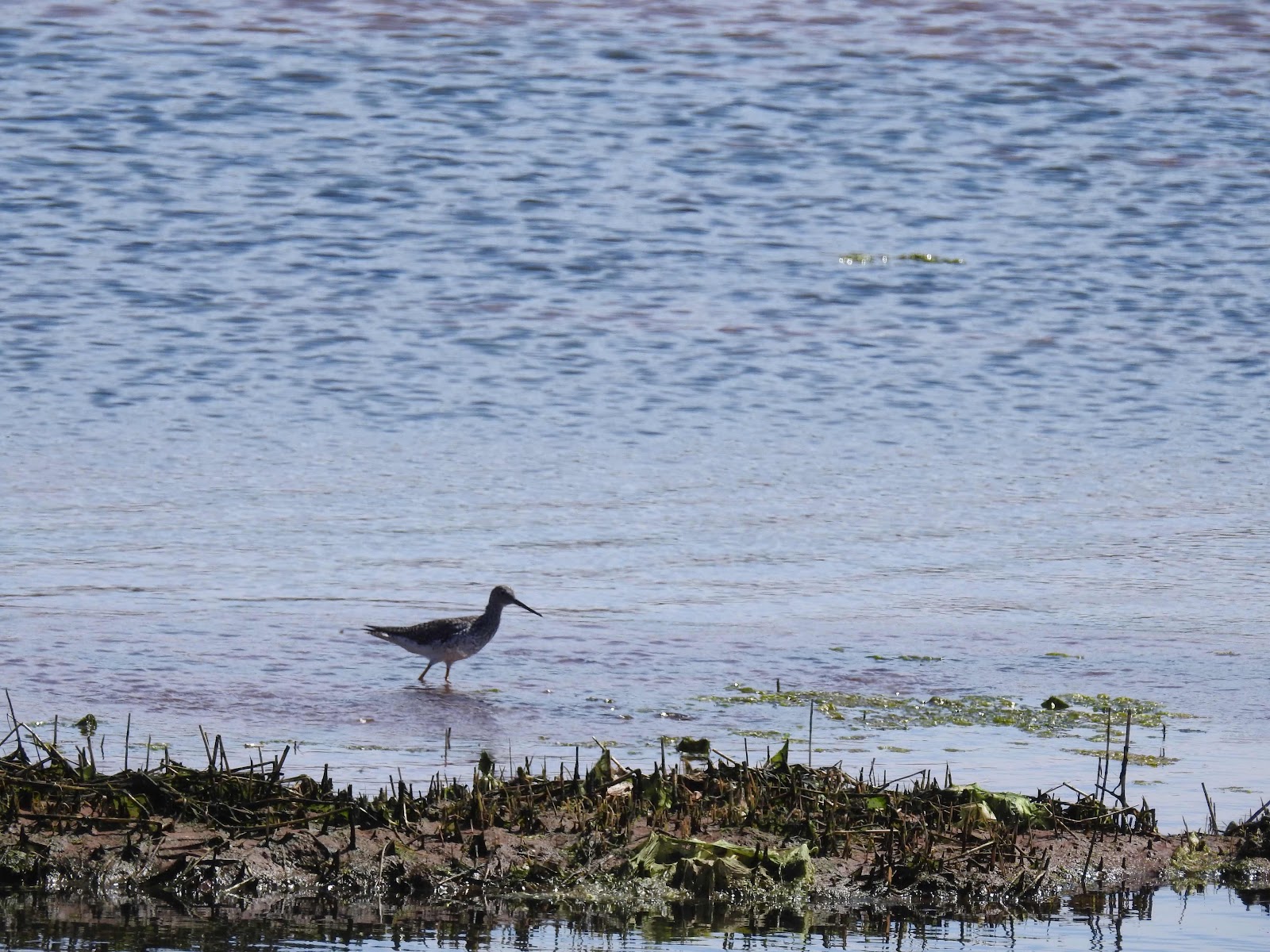 At the New London Lighthouse, the setting lived up to our expectations. 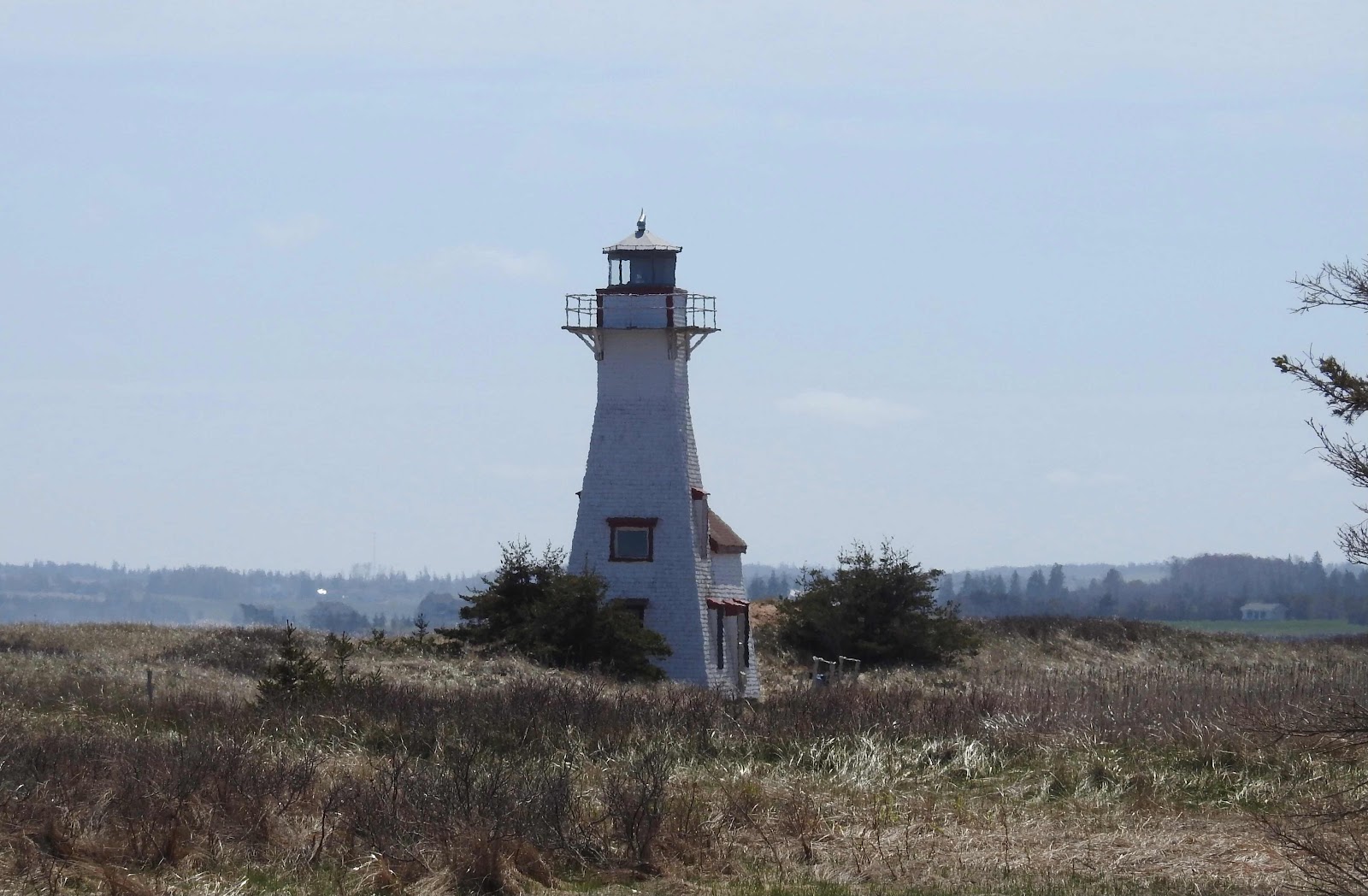 Waves broke in the shallow water offshore, providing a white water backdrop for the remains of the old wharf. 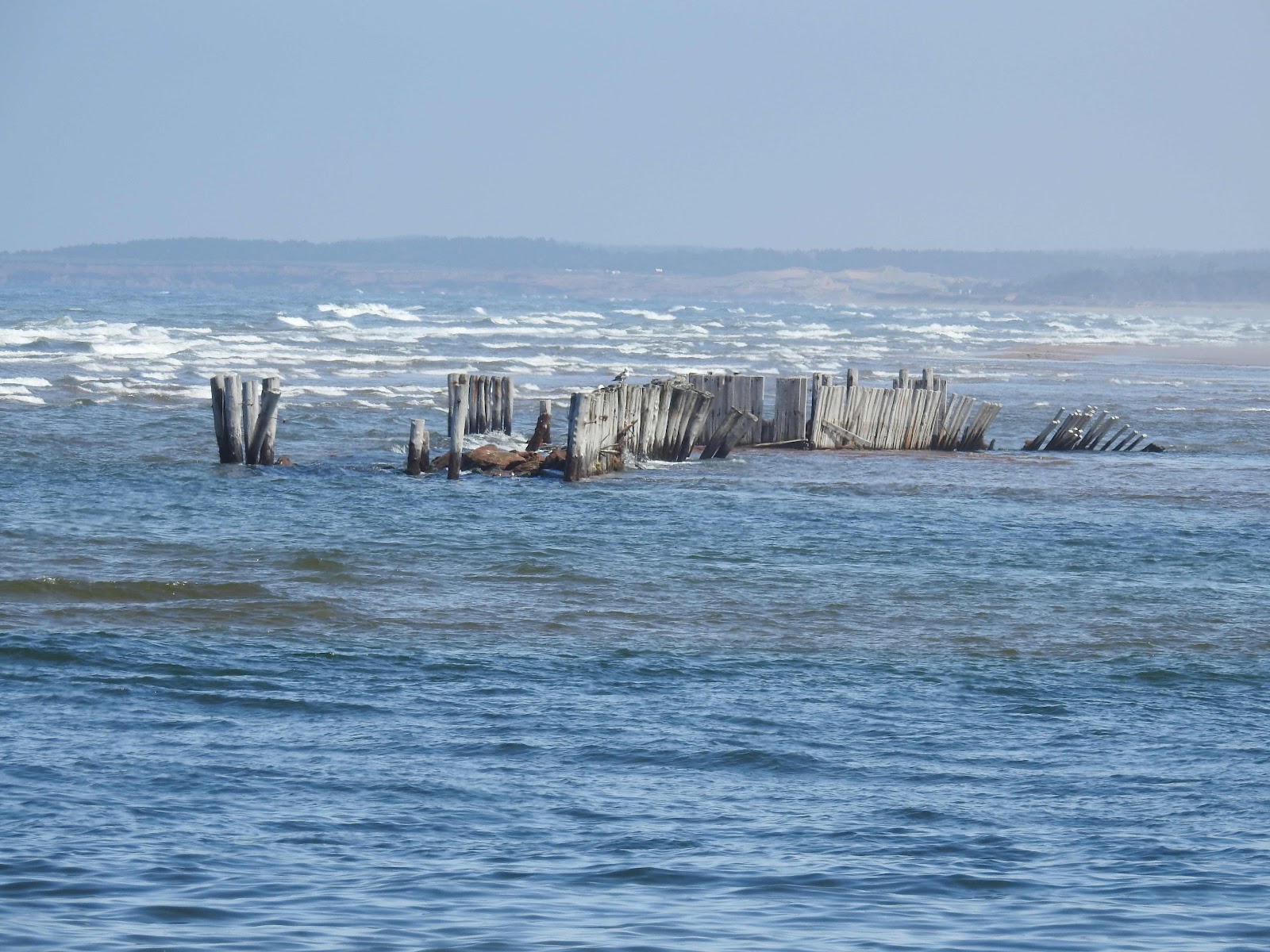 The grey weathered wood is a perch for birds but only one gull was in residence that day.

Fog rose from the channel and the houses in the distance became faint outlines. 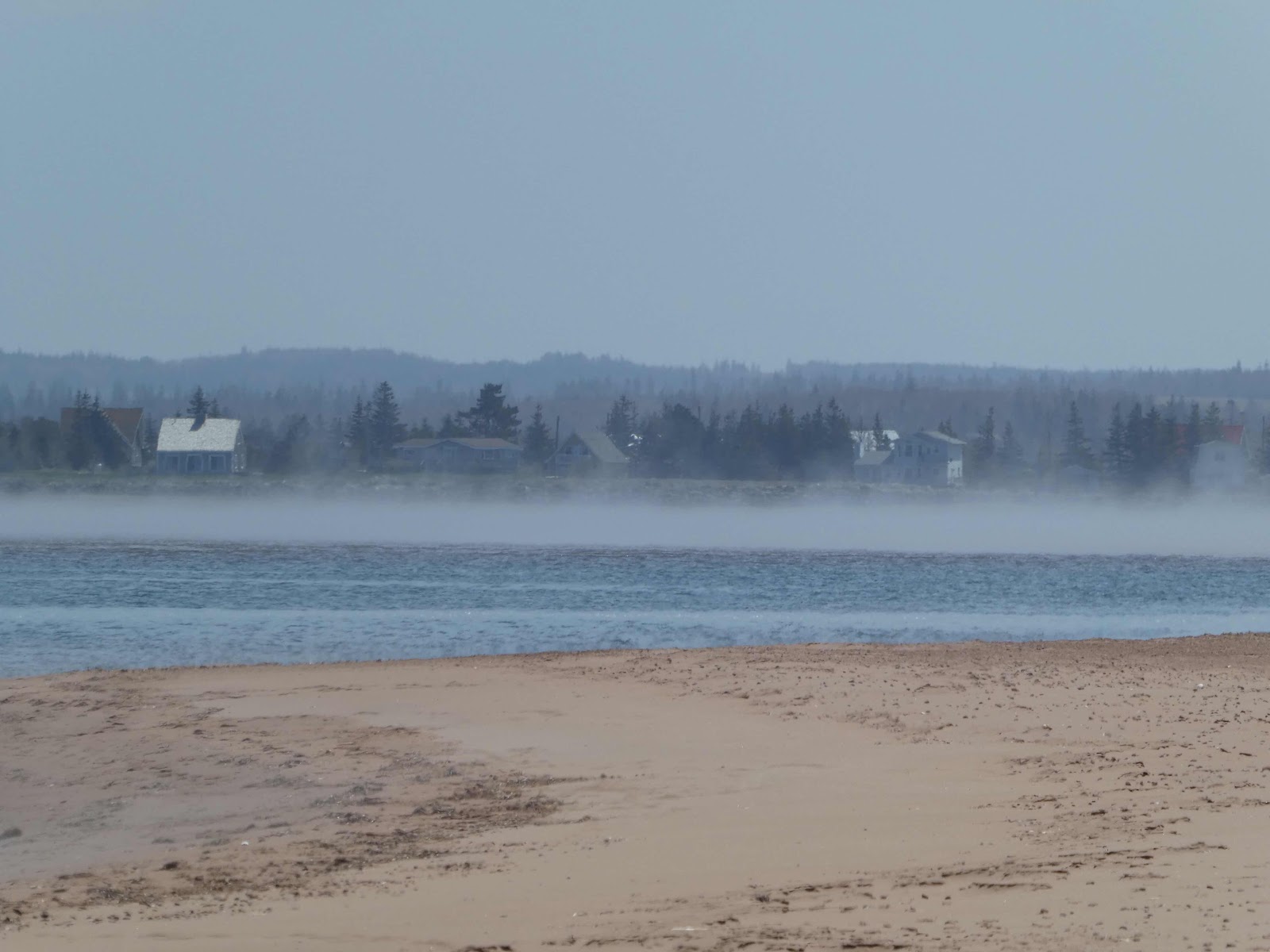 Mere metres in front of us, a small flock of gulls played in the breeze and dabbled in the sea. Eventually they formed a line in the falling tide as if playing follow the leader. 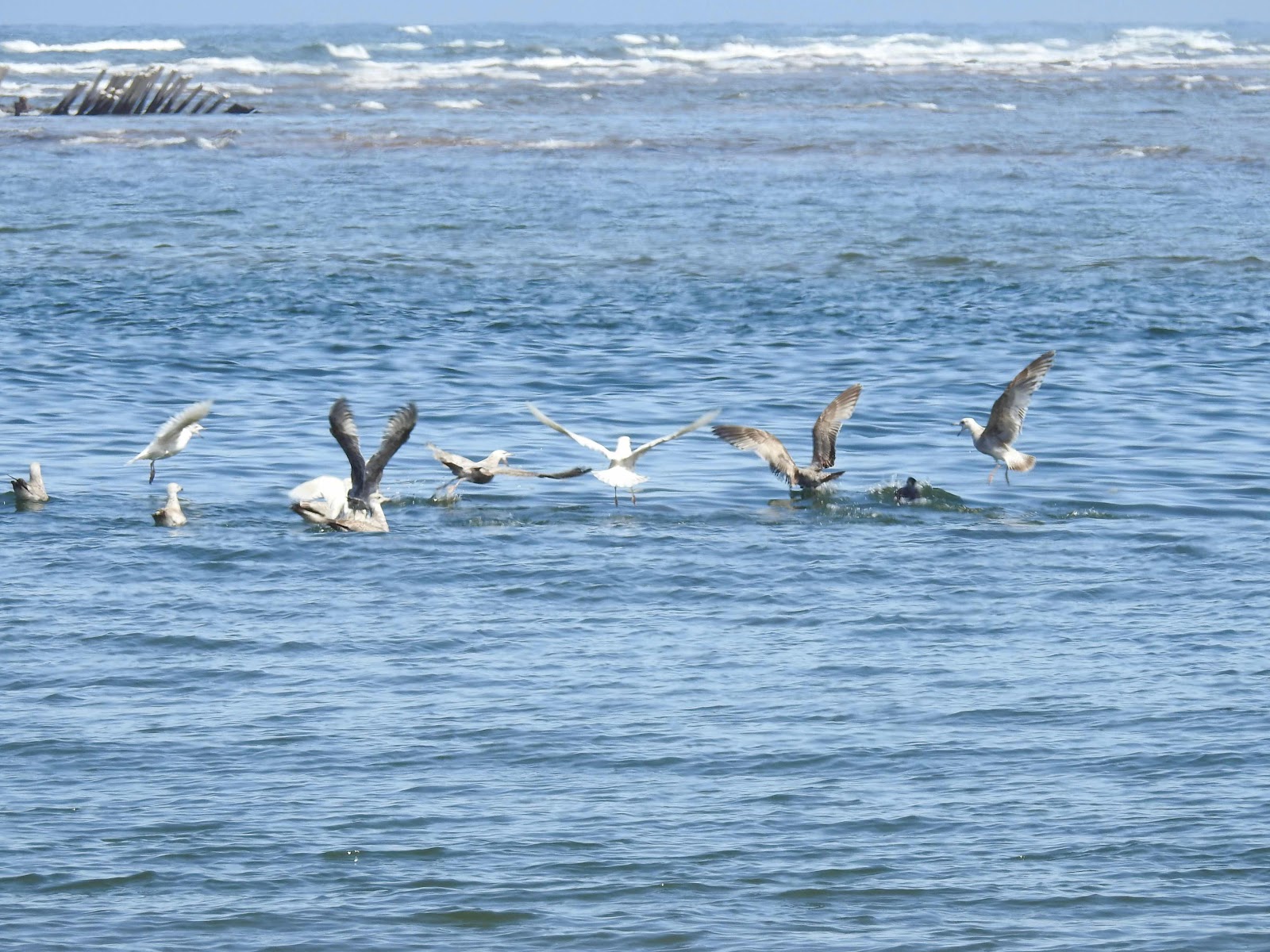 We didn’t stay long enough to see fishing boats pass on their way to and from port at French River, but we’ll have a picnic and a walk on the beach there later this week. 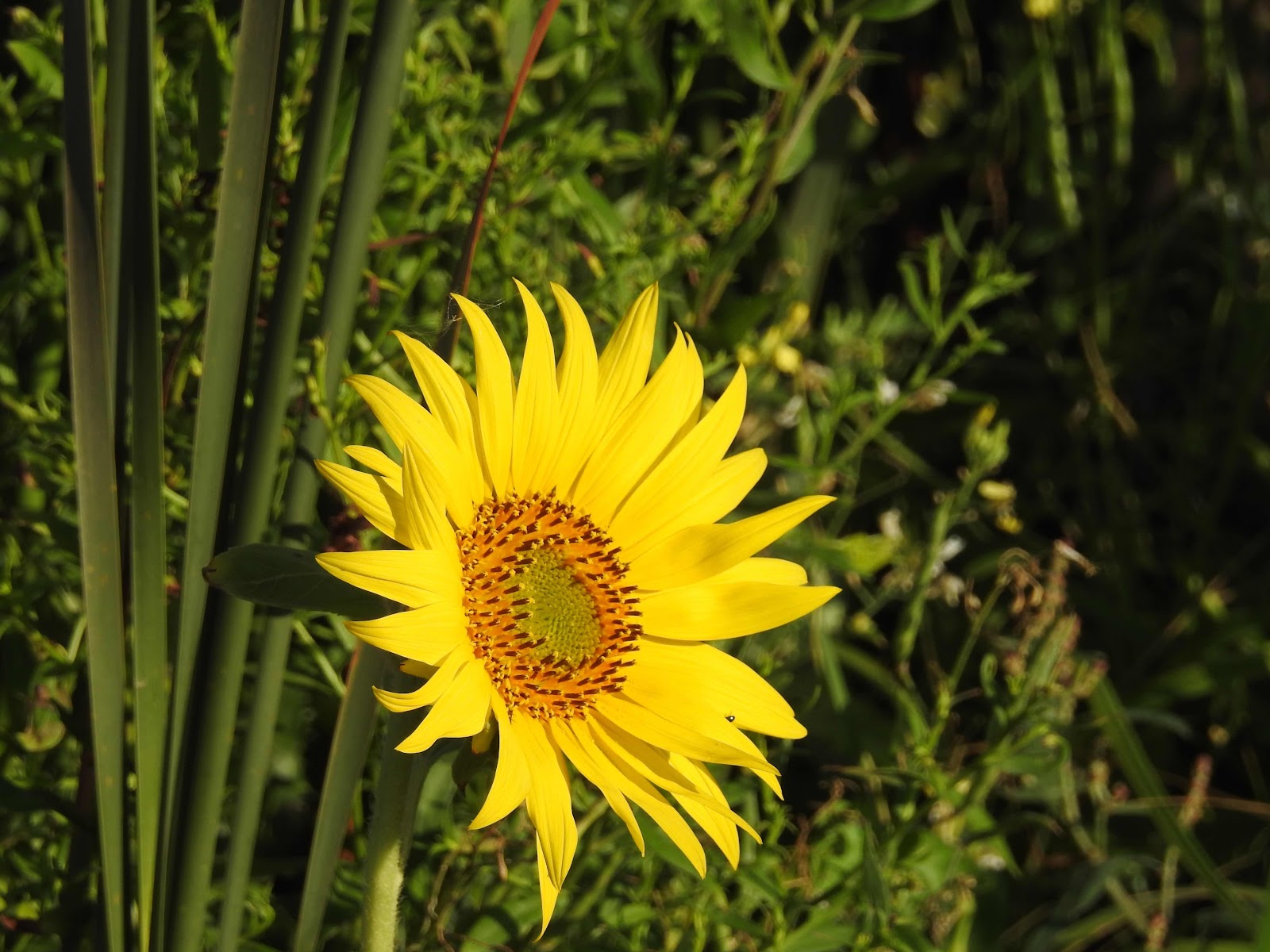 Never far from our thoughts

My favorite is also the old wharf. It looks in motion.

Beautiful photos. Nice that you had such a lovely day.

Glorious photos. I especially like the old wharf one and of course the sunflower thoughts.
Sue

Oh my, a lovely post and it made me homesick for Maine!❤️

A truly delightful walk - and catch up too.
And YES to your final photograph and thoughts.

I like the feeling these photos evoke. I really liek the first and last photos.

It was great to catch up with you and Rick again, Marie. Sometimes serendipity is at work. We are now safely ensconced on Grand Manan Island, missing PEI already. See you next year!

The lone gull on old wharf pilings' photo is a, "Where is everybody!?" photo if I ever saw one. Beautiful scenery

My camera yearns to visit spots 5 and 6.

I wish everybody would et out as much as you do. People would be much better off.

Beautiful photos, I love the views of the water and beach.
I love the gulls and the lighthouse and the pretty sunflower.
Take care, have a great day and week ahead!

You are so fortunate that both you and your husband enjoy being out in nature. Thanks for sharing your adventures through your beautiful dialogue and photos. I really enjoy them.

Beautiful photos! I like the second one. A little gulf and colorful houses are fabulous!

All of your photos are so lovely and make me long to walk along the shoreline of a beach! How lovely the whole area is! I love the lighthouse!

A cousin of mine, wrote a serious of books. And dog name is Cavendish.
Coffee is on and stay safe

Beautiful pictures, thank you. I really enjoyed it.
hug Viola

I always enjoy hearing about what you see and also enjoy your photos. The one with the fog should be a watercolor painting!

You really put me into a traveling mood with this one. I have a fondness for lighthouses, so I particular enjoyed that one.

A walk and a picnic...you've given me a gentle "push" to get out and enjoy the same things before it's too hot, thank you! Mary

There is always something new to see and appreciate.

Beautiful Sunflower. I wish I had a whole field I could use the heads for bird feed and more plants.