Cancer took Dad within a year but it's effect on mom lasted the rest of her life.  During the months of his illness, Mom was devoted to Dad and cared for him at home until the day before he died.  She was in hospital herself during this time, due to the effects of the stress.  Dad wasn't someone who was socializing without mom.  Our parents were inseparable.  Frank and I cannot remember times when we had babysitters.  We did things with our parents.  On a rare occasion our grandparents looked after us but that was highly unusual.

With Dad gone, Mom was lost for about a year.  She cried a lot and certain triggers were particularly difficult, like Christmas music.  Eventually she decided that she would get back into life again because what choice did she really have?  She started with her driver's license.

Mom had tried to get her license when she was younger.  However after just avoiding the garage door trying to park one evening, she gave up.  This time she had renewed interest and incentive, a car parked by the door.  Mom took lessons and Frank took her out as well.  One time he somehow injured his big toe, tearing off the nail.  I've never figured that one out!

Eventually after two tries, our sixty-one year old mother got her license.  When the tester told her she passed, she "cried down tears."  Frank and I kept our fingers crossed and our toes hidden.

After she got her wheels, Mom became more active in every ministry available to women at Mary Queen of the World Church.  She especially enjoyed her work in St. Vincent de Paul Society and the Catholic Womens' League.

Mary kept her travel routes within a certain perimeter of Mount Pearl.  She was comfortable driving in this area and enjoyed the freedom her license gave her.  Every so often Frank saw her driving around the city and kept his fingers crossed.  Mom had a heavy foot on the accelerator.

There is one incredible story about Mom's driving.  She picked up two friends one Sunday afternoon and headed to Bay Bulls to a garden party.  Driving into Bay Bulls there is a steep hill from which with two roads branch and go down to the ocean.  These two roads are narrow by highway standards and often there are cars parked, people/children walking.  As Mom headed down the hill her brakes quit and somehow she safely got the car down by the water and stopped without hurting anyone.  She prayed but didn't say anything to her passengers as she maneuvered her way to safety.  She didn't use the handbrake either.  She believed she was "guided" to safety.  Something unusual happened, that's for certain.  Maybe the fast driving that she always did was great experience when she had no choice but to drive so fast.

Dad and Mom became grandparents when Claire was born in 1980.  Claire, born on December 21st, was in a carrier under the Christmas tree when Mom and Dad first saw her.  I remember the looks on their faces.  They were so proud and thrilled with her.  Then after Dad died, in 1994, Samantha was born to Frank and Michele.  Mom lived in their basement apartment for a number of years so she was very close to Samantha and enjoyed every minute with her.  One semester when Claire was in university she stayed with Mom.  She got to know Mom as a friend as well as a grandmother.  They laughed a lot and ate cheesies. 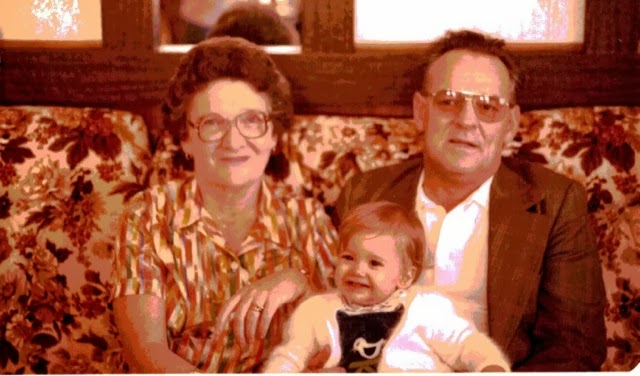 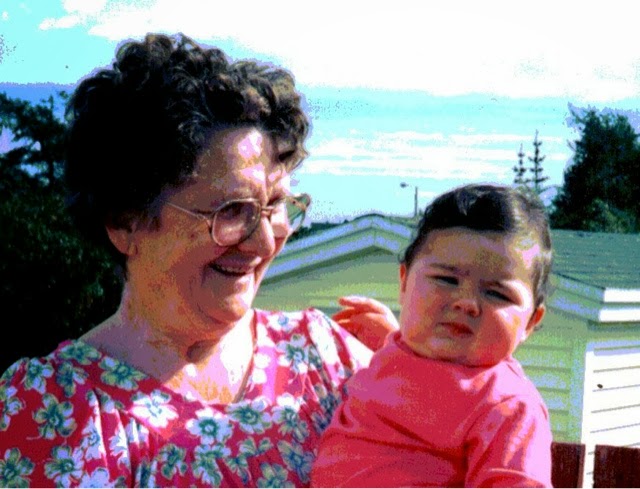 Mom loved the phone and spent lots of time talking to her friends.  Mom and I talked every day but it was often difficult to get in touch with her.  The phone was her life line after Dad died, especially in winter when she stayed in more.

Just over two years before she died, Mom was diagnosed with an abdominal aortic aneurysm.  Doctors were unable to repair it.  She was told that she would die suddenly with it but that she should go home and live her life. That's easy for someone to say!  How do you put it into action?  How long would she have?  What would the end be like?  Would she be alone?

A Doctor she trusted told her that she would know when the end was near.  I think she did.  A month or so before she died, Mom suffered from something that she would normally shake, but not this time. The week before she died, I visited Mom and we talked about her family after she died and what she wanted done.  We cried and laughed, talked about old times, ate some good meals and said good bye really.

The night before she died Mom had sharp lower abdominal pain but didn't want to go to the hospital.  Claire, a nurse, Michele and I got her comfortable for the night and everyone slept, including Mom.  At nine the next morning, I went to say good bye since Claire, Ben and I were headed home, not realizing what was going on yet.  Then she asked me to help her out of bed and as I did, she had sudden, sharp pain and that was it.  Claire and I held her as she breathed her last.

I hadn't been there when Dad, Nan or my uncles died.  I think I was ready to handle Mom's death by the time it happened.  She died in our arms, with the belief that Dad was waiting for her, at peace, comforted by the faith that had sustained her throughout her life.

One week before she died

She is never further away than my next thought.