My grandfather O'Brien didn't have much education. He always commented that he reached "Tom's Dog" in school, then he left. If he could read and write, he was functionally illiterate. However, he supported a family through farming and fishing, living off the land and sea. Granda was a smart, capable man, without the benefit of education, like so many of his time.
My grandfather Pretty also spoke of "Tom's Dog" in the Royal Readers as well. He didn't get much formal schooling either but started work on the railway as a fireman and later become an engineer. He had to pass tests for his job. I suspect that Pop Pretty had more formal education than my grandfather O'Brien though not much. He may have improved his literacy skills in order to function as an engineer.
The story about Tom's dog was in the Royal Readers, a series of English text books used in Newfoundland schools from 1870-1936. Tom and his dog were introduced in the Primer Reader, the first in the series. The next few readers continued their story. 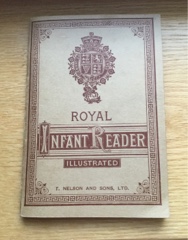 We have a copy of the second book, the Infant Reader. It has numbered lines to the stories, sketches, and spelling words with each story and a lesson to be learned. 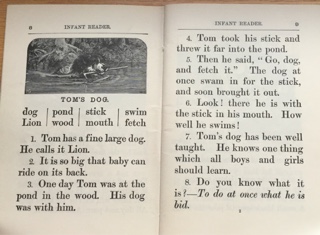 Writing script, phonics, addition and subtraction tables were at the back. 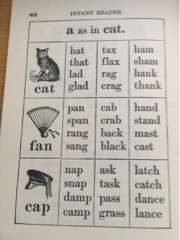 Each book which a child completed was an advancement through school. 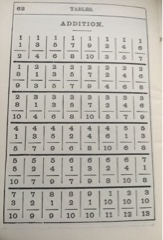 The last installment of Tom's Dog, has the dog stretched over Tom's grave. 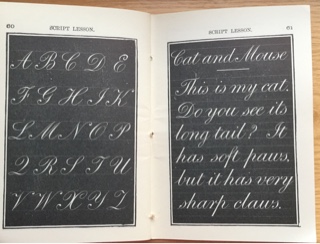 One of the professors from Memorial University, Dr. Otto Tucker, died this past week. He was a great educator and spoke at one of my husband's education classes on children's literature. Dr. Tucker was entertaining as he discussed historic and current trends in children's literature. He made specific reference to the story of Tom's Dog and the sad image of the dog on the boy's grave. Even in the 1970s, it was hard to imagine such a story had been part of a child's reading program.
Dr. Tucker commented, "Why didn't someone give that dog a kick in the arse and send him home?"
Rest in peace Dr. Tucker. You kept it real.
Posted by Marie Smith at 15:33

Tom's dog reached into later generations for sure.

Here is a new response to an old blog which I found while researching a book called 'Tom's Dog'. It was used by a Bell Island woman in the later 1800's. Alice Skenes attended school, where she did her work on a slate. She had to have a bottle of water and a cloth to clean it off. The two books she learned to read from were the Royal Reader and Tom's Dog. Thought you might find this interesting...