This little school house stands against the elements in Lower Bedeque, Prince Edward Island. On this cold winter day, with the wind attempting to freeze our brains, it is hard to imagine the time when this school opened in 1886. 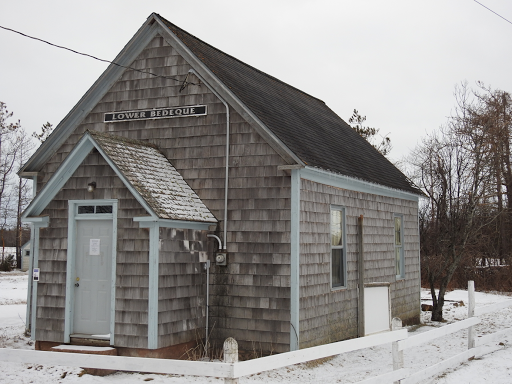 We think about the children walking to school from the area farms, or horse and cart pulling up to drop off neighbourhood children. The little one room school opened its doors to all ages as was common at the time.
Lucy Maud Montgomery, an island author, taught in this school in 1897 for six months. She left to care for her grandmother after her grandfather died. Lucy Maud never taught again.
However, it was an interesting time in her life. Lucy Maud was engaged when she moved to Lower Bedeque. During her time there, she met a man described as "the love of her life." Herman Leard was one of two sons of the family where she boarded, near the school. Nothing came of the relationship; Lucy Maud left and Herman died the next year.
As my husband and I observed the little school this day, we talked of the school where he taught in 1975-76. His post was in Grand Bruit, Newfoundland, an isolated community on the island's south coast, only accessible by coastal boat. 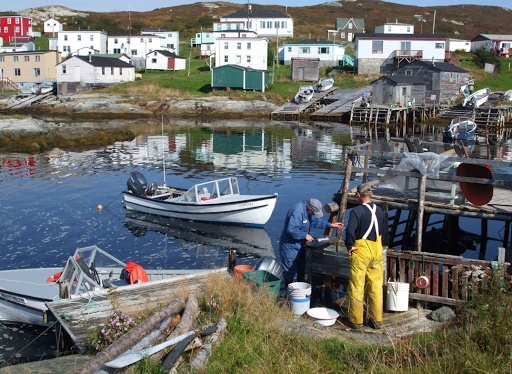 Grand Bruit, Newfoundland.              School, center back.                           Photo by Don Bradshaw
He taught everything from Kindergarten to Grade 8 to nine children in the community. The children left home to do high school further along the coast, in a community connected by road to the rest of the island. Today Grand Bruit is abandoned and the people resettled elsewhere in Newfoundland.
We were engaged during that year as he worked in his sole charge school. The next year he was offered a job in the school where I worked and we were married. The rest is our family history.
On this cold winter day, a little school in Prince Edward Island stirred up warm memories of young love which has matured and grown with time.
Happy Valentine's Day to you and your special one!
Posted by Marie Smith at 03:44

It is hard to imagine those days and how the school must have seemed to those inside those walls. It was a different time, but the buildings still remain. Yes, love remains too, but it changes and matures, as you said, over time. Love the post! :-)

Happy Valentine's to you and your sweetie. Love those old school houses and their stories.

Wonderful to learn more about Lucy M. Montgomery. Schools were very interesting in the old days both in Canada and here in the US. Your husband must have lots of stories to tell of those teaching days. Happy Valentine's Day!

Such hard, hard conditions then. My friend in Wisconsin has a one room brick schoolhouse in the front of the business. Sweet, but it would require thousands and thousands to bring up up to current living standards.

I cooked a steak lunch for my Valentine. Lovely post Marie. Anne of Green Gables is a favorite.

That must have been a heck of an experience teaching in that school. It's an era long gone but not that long if you can look back on it.

Thank you Jan. Have a great day with your valentine tomorrow!

Thank you, Celia. You have a great day too.

It was an interesting time in his life, Angela.

I can only imagine how much it would cost to modernize an old school house, Joanne.

Thank you, SS. Enjoy your day!

That school closed in the last five years, AC. Young teachers were going there on the coastal boats up until that time.

Such a sweet story, Marie! The school house sounds like "little house in the Prairie". It seems sad that town is abandoned today! Such a nice picture of it. Very nice memories of your husband and your meeting. In contrast, Lucy Maud's life sounds sad. Andrea

We have an old one room school house very similar to the one above in our community which the historic society keeps maintained to its original look. It has been interesting when talking to a few seniors who've offered that they taught there.
Happy Valentine's Day.

Such a pretty school! I enjoy to imagine little students of all aged walked to that school.
Glad to see the school has been prevented well, over one hundred years! Thank you for sharing, Marie.

Same to you Judith. Have a great day.

I hope to take some pictures of the inside of that little school this summer, Tomoko.

I look forward to seeing your photos,Please.

Always intrigued by one room school houses. My dad taught in one years ago.

A lovely story for St Valentine's Day. Brings back the stories of Anne of Green Gables too.
Sarah x

Did your Dad tell stories about his experience in that little school, FG?

Ann is a big part of island life, Sarh, as you can imagine.