It was our first visit to Seacow Head lighthouse. The area, about twenty minutes from Summerside, Prince Edward Island, is cottage country. At this time of year, the cottages stand empty against the worst weather conditions.
This year though, has been unusual so far. While the winds have wreaked havoc on trees and roofs, the snow has stayed away with the exception of a few days earlier in the season. Now, little remains. My husband and I could drive up to the lighthouse, a rare mid-winter experience.
This lighthouse stands on a headland of sandstone cliffs. Here, the sandstone along the shore is covered in red soil which washes away easily. You can see the vegetation hanging over the side of the the cliffs as soil disappears faster than the sandstone below. 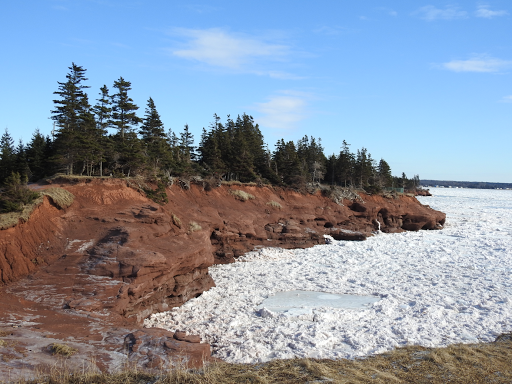 The ice in the Northumberland Strait extends to New Brunswick on the mainland, visible in the distance. 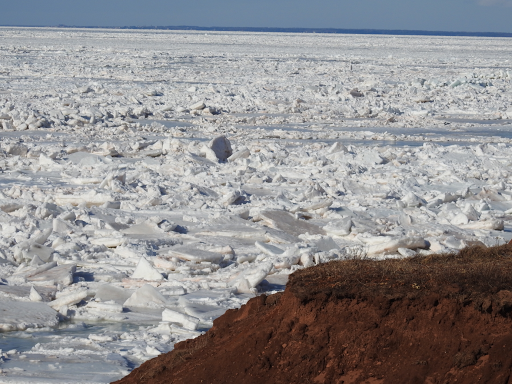 On closer inspection, one realizes there are small areas of open water. 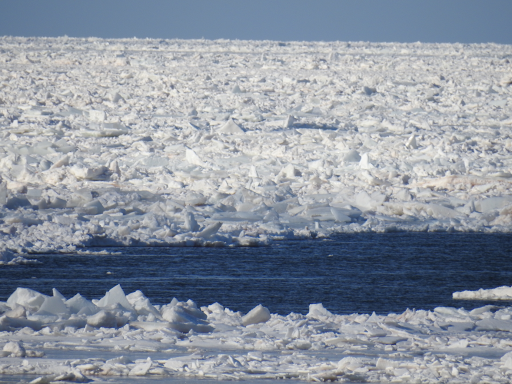 Along the shoreline, the ice piles up with the on-shore wind and the tide. 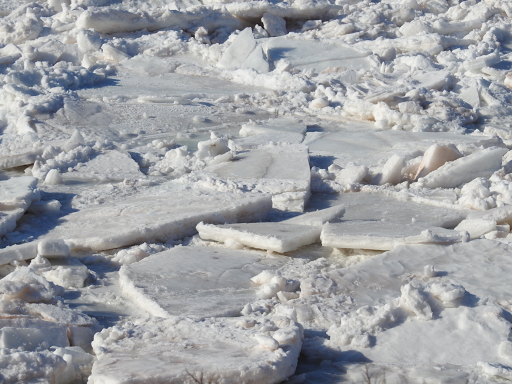 The red cliffs are in stark contrast to the ice, but water has frozen in transit down the rock, as if attempting to link land and sea. 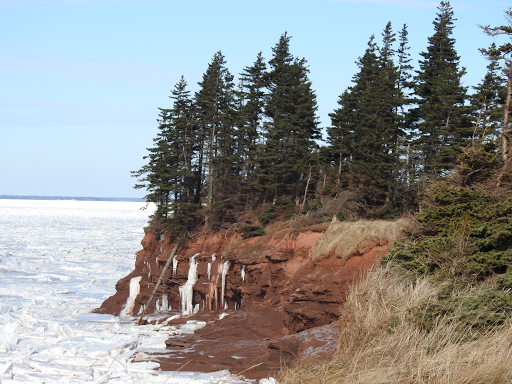 The Confederation Bridge is visible in the distance. 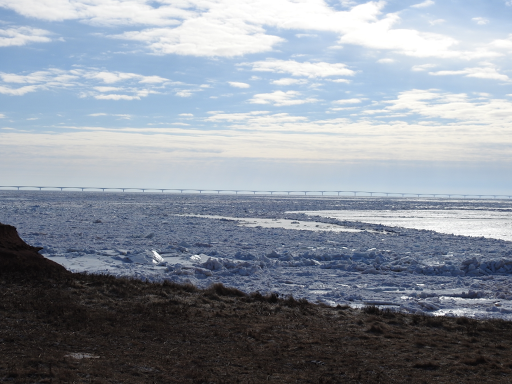 It is the world's longest bridge over ice-covered water. People and nature have worked their magic and today, the bridge looks like part of an ice field.
High winds do not test the lighthouse today so the cold is bearable. 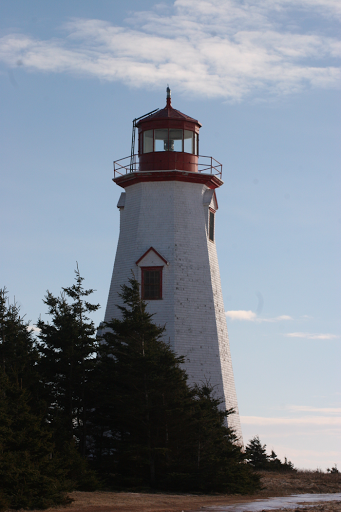 The lighthouse and the land are named after walrus which lived in these waters at one time. The structure was built in 1864 but was moved from its original site in 1979 due to the effects of erosion. Today, gullies into the shoreline show that effect. 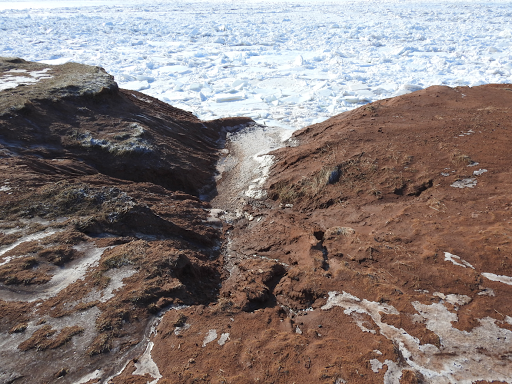 The long grass on the headland looks like waves of blond-gray frosted hair. 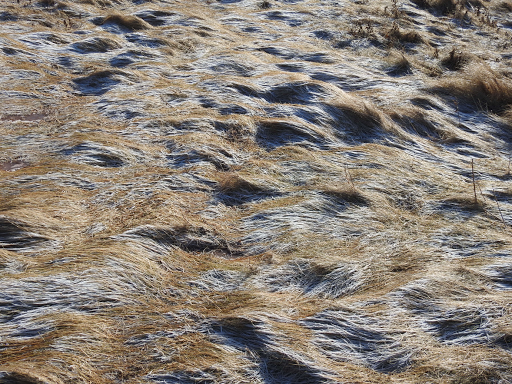 A tree near the edge of the shoreline has experienced severe conditions if the trunk is any indication. 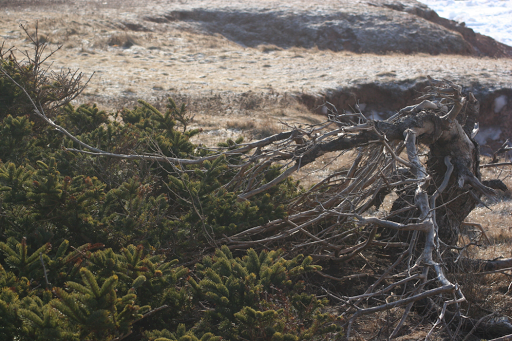 Nearby, the road around the lighthouse is like a skating rink. 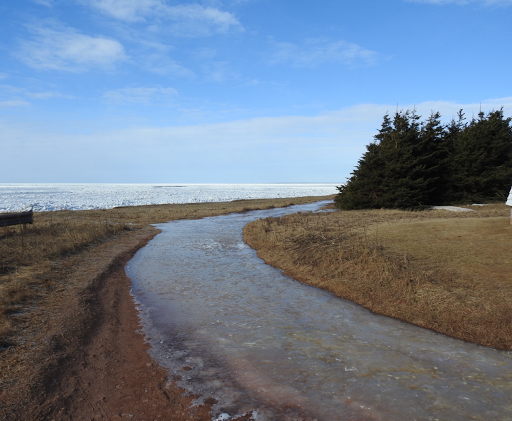 The weather sculpts this place. We look forward to its artistry next season.
Posted by Marie Smith at 04:18

Nice photos of a nice outing. I like them all, but the long grass stood out.

Amazing country. That is an incredible bridge.

Wow. I do see the open areas of water. These are fun pictures to look at.

The ice is neat! Lighthouses are so neat too. Ha...that "hair" could be a close-up of a dog's mane in my mind! Andrea

I love that one too, AC.

Indeed it is, Celia.

Happy weekend to you too, HW.

It could be, Andrea. Have a great weekend.

Such a beautiful place, if rugged. I love your posts about your environment, Marie. That bridge picture is stunning, it's so long! Thank you for sharing your home with me. :-)

The winter weather has such an effect on the surroundings. I wonder just how tough the wildlife has to be to survive in the winter.

They have to be hardy for sure, Shammickite.

Hello,Marrie,
Your photos always surprise me. So beautiful and such a powerful nature.
Stay warm and have a good weekend.

Much trouble this AM with your site. My comment disappeared.


Absolutely fascinating Marie. I get somewhat queezy when going over bridges so I would probably pass out if I tried the one you showed ! Thanks for all the photos. It's an area I know nothing about ... until now !

Thank you, Tomoko. Have a great weekend!

Thanks for the heads up, SS.

There are many people who feel the same about bridges as you do, Ginnie. I am glad I don't mind them or it would be hard to live here.

We had a lot of snow after these photos were taken, SW.

Oh what a post! I could just imagine how thankful you were to visit without the wind! So amazing to see all that frozen ice, and then bits of open water. I didn't know that the lighthouse was named after the walrus, or that any walrus were on the island. Are there still any there? What a lovely daytrip to take! Loved it all :)

There aren't any waltus here these days, SUI. Seals are on the ice in the eastern part of the island sometimes this time of year though. We have never seen them in this area.

So truly lovely all this is...yet little snow this year. Thank you.

Fascinating to learn about that area. The winds there must be something else to see. The photos are awesome. Thank you for sharing this Marie.

We having a blizzard for the next few days, Mage. It's not too late for a ton of snow!

The winds are incredible, Angela. You are welcome!

It is an incredible sight, Sarah.