The tools of the trade are frozen in the February snow. 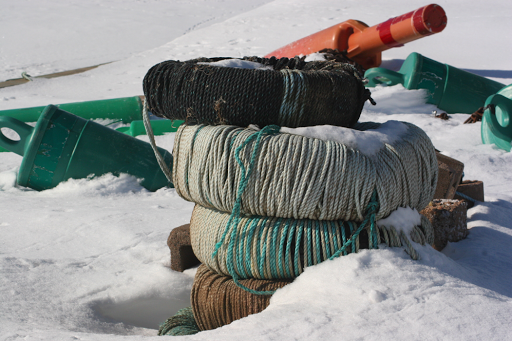 It will be a few months before the fishers reach for this gear in preparation for the lobster season. Meanwhile, the bits and pieces await the time when the sun is higher in the sky and activity increases around the fishing shacks.
The gear is colourful against the snow which is melting around it today. 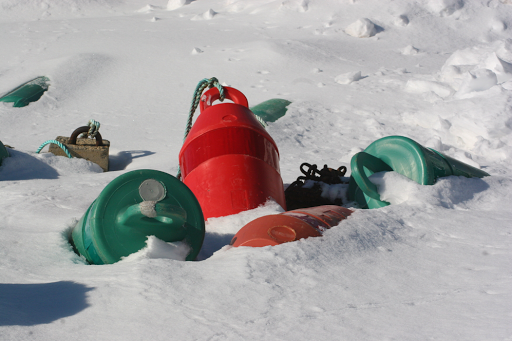 It will take more than today to melt this snow however. Yet, it doesn't matter. This gear has withstood worse as it waits to be useful again.
The lobster pots are weathered with that gray look wood attains when it has seen better days. 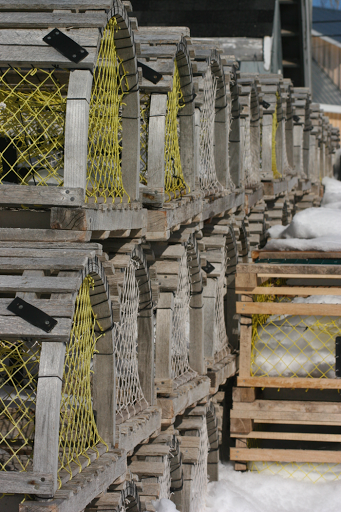 Some call it character. Mesh fills in the spaces where unsuspecting lobster will be imprisioned. Rope gives the traps lines of colour. 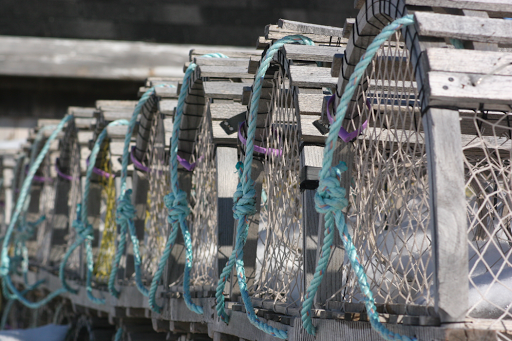 Construction of the buoys required time and effort in their day. They were the traditional markers attached to the lobster traps set in the water. Each fisher had his own colour pattern which marked his traps. Today they are used as decorations. 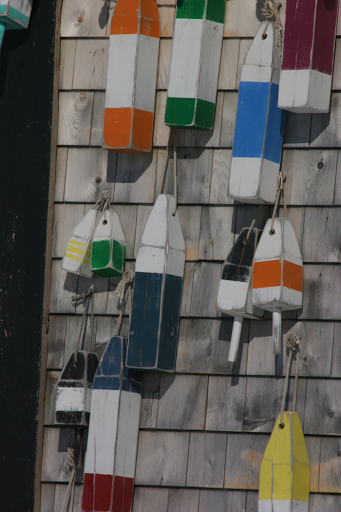 The traditional setting sits in anticipation as it holds the history of the people and their culture shrouded in the melting snow. 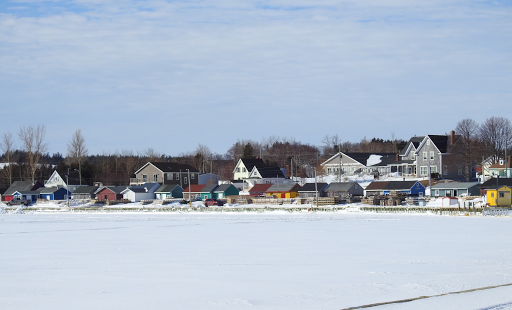 Looking beyond the surface can lead to some interesting discoveries.
Posted by Marie Smith at 04:09

We start to get anxious as February progresses. We still have much snow, but there has also been quite a bit of melting this past week.

Love the photos. Tell the story of an important industry.

sounds like an exciting life, as long as you are not a lobster. beautiful images - the lobster pots, lined up, brilliant!!!

You remind me of my vacations in Maine.

Amazing photos, love the spots of color to be found amidst the melting snow!

Same for the crab industry in Washington State, only :-) no snow. What a beautiful portrait of the lobster industry.

I'm getting a bit fed up with winter, so I was happy to enjoy some nice weather over the last few days. But I'm sure we will get more snow before it all melts away and gives way to Spring.

The colors contrasting with the snow are neat! Andrea

It would be lovely if we didn't have any more, AC.

It is very important to this island, Tabor!

Thank you, Debbie! Not so good for lobsters, true!

The lifestyle is similar to Maine in some ways for sure, Joanne.

I loved it too, SUI.

Thank you, Celia! It is an important industry here.

It would be nice not to have more snow. That's for sure, Shammickite.

There was a lot of colour in that place, in spite of the snow, Andrea.

All that stuff is there so we can all imagine what it's like when it's warmer.

Such pretty pictures. I live in north Georgia, so your scenes are rare for me. Have a blessed weekend.

True, Ratty. It is glorious there in the summer. We wait...

Thank you for visiting, Mildred. Blogging brings us to places we've never been. I have never been to Georgia so your blog will take me there.

I truly enjoyed your colorful and descriptive pictures, Marie. Lobster fishermen must be a special breed. We have plenty of fishermen around here but no lobsters for them to capture. :-)

I didn't know there were no lobsters there, Jan. I take them for granted I guess!

Beautiful photos---all of them. It reminds me of some areas around here.

The clean crisp snow is lovely, but I am starting to long to do a bit of gardening. I love crawling around in my yard among the bushes and shrubs, watching for new greenery as it starts shooting up through the soil.

In some ways it reminds me of home too, Kathleen.

It has been mild here for a few days now and the snow is melting. However, it's too early for spring, or is it?

Always find the gear around fishing harbours fascinating (and colourful)!

It is indeed, FG.

I love those lobster pots the surrounds of ours are all plastic. We are just about to plant up some lobster pots down in the bay. Yours would look so much more attractive. Sarah x

We haven't gone to plastic yet, Sarah.