Every September our daughter asks her children, “What do you want to be when you grow up?” The eldest, at six, wants to be a ballerina and the second child, four, wants to be a fairy. Lofty goals indeed.

I remember the days when I thought about my future. My parents stressed the importance of an education so I would be able to support myself. I knew my education would continue past high school. They left the decision to me as to what I’d do.

Maybe nursing school I thought. I considered it for a minute and volunteered at a hospital as a candy striper. An encounter in a burn unit nixed that idea. Nursing school was out.

I had zero interest in secretarial work beyond improving my typing skills. Instead, I went to university, which fueled my desire to learn, but what would I do beyond that science degree?

I enjoyed science but couldn’t imagine working in a lab for any length of time though I was fascinated with embryology. It was the field I would have pursued if I could have tolerated time in a lab, but it was not for me.

I decided to become a teacher and with an extra year of university, off I went to teach in a mining community in central Newfoundland.

I limited my career considerations to the traditional female roles. I didn’t consider anything else. As it turned out, I made a good choice. With the exception of the last few years, when the job changed a great deal, I enjoyed working with high school students. I lucked into the right field!

Now I look at our two granddaughters and wonder what they will do. One of the saddest things about getting old is not being around to see what becomes of them. The few who do are fortunate.

Last week, my husband and I took four year old, Caitlin, to the library to hear stories about firefighters. She also met a firefighter, sat in a fire truck and saw the equipment. In our youth, there were firemen, not firefighters. That day, the librarian and the firefighter spoke about women in the profession and referred to the woman at the local department. Caitlin will always have a broad perspective of what a woman can do.

Today, people mention women in the profession because it is a relatively new concept. One day, as younger generations take their place, it won’t be mentioned. It will be the way it is.

Caitlin enjoyed the experience. She received a hat, 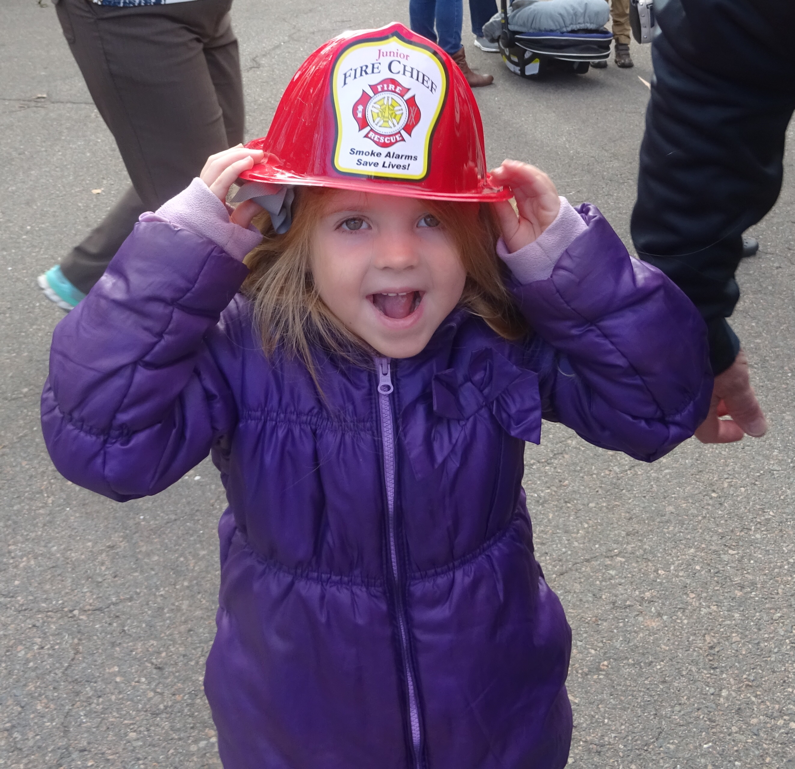 a colouring book and crayons and some to take home for her sister. We went to lunch as well. She picked out the next place we’ll eat after we see a police officer next week. Meanwhile, the family pet, Georgie is not too pleased with the hat she had to wear. That animal has no interest in becoming a fire house dog! She is content with her current occupations as hair shedder extraordinaire and chief barker. 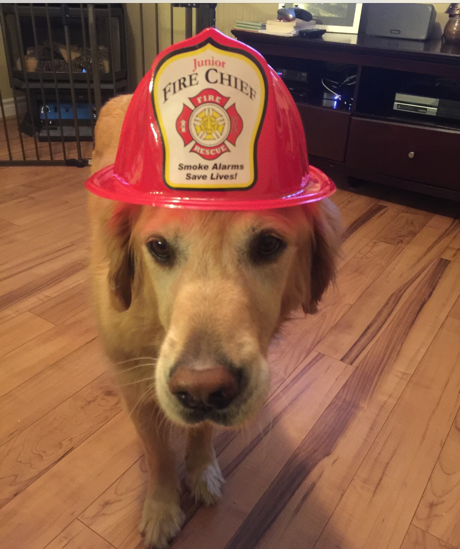 My granddaughter had a similar firefighter/truck experience Marie, she loved it. It's brilliant to know the choices for young women are equalising all the time. You yourself made an excellent choice, teachers are invaluable!

ooooh goodness, i loved this fun entry!!! i have wanted to be a nurse since i was 5, and went to nursing school right out of high school!! i was born to be a nurse!!!

firefighters, i must remember that!! your granddaughter is adorable!!!

Kudos to your firefighters. My grands loved visiting the firehouse and seeing a fellow in full gear. He was explained that sometimes kids would see them in their gear, helmet and air tank and be afraid of them. The kids learned that those rescuing angels come in this garb too.

I could have never been a teacher myself but I have dearly loved some of the people that came into my children's lives through the classroom. I can think numerous women and men that have my deep respect and a few that arrived and became dear friends. Grateful for each of them because we learned something from all of them (even the ones who were not good ones).

The few years I taught were wonderful. I taught at night, which meant these folks worked all day, then came to spend some more hours in a classroom to achieve a goal. They impressed me!

It worked the other way around too. Looking after children with disabilities was never considered to be a job that men could do, but that's where I found my niche for the last 23 years of my working life.
I don't see what's wrong with equal opportunities for dogs either!

Loved this entry, Marie. I went into the secretarial field because back then it was pretty much expected of me. I had a flair for copyediting and then became one, and finally a writer as well. But I loved just about every one of my teachers and sort of wish I'd done that. Or a fairy: that has quite a bit of appeal. :-)

All I ever wanted to be was with horses all my life. Pretty much that dream came true up until I got married and the cost of keeping a horse was too much. I worked in racing stables when I left school and had my own show jumpers as well.
Interesting post, thanks for sharing Diane

she is precious beyond words! I regret not fully committing to things I loved, but I had a super practical mom who poo poo'd them, because 'not enough jobs in the world...you'll always struggle.' for those careers. Stupid mom. :(

I love that doors which were firmly closed are opening up. And hope that more of them are finally removed from their hinges.
And still don't know what I want to be when (if?) I grow up.

“Great story Marie. You made a wonderful choice that worked out well for you. Your grandchildren will have many more options when its their time to figure out what it is they want to do. What a great experience to go listen to a firefighter talk to children. It's an experience she won't forget.”

I had trouble saving Bill’s comment. You can find his blog at http://somewhereinirelanddailyphoto.blogspot.ca/

Oh golly, my kids loved those fire hats and seeing fire trucks! I have a degree in education but I have never worked or taught. I always felt education was important to raising children though. Andrea

Young women today don’t limit their thinking like I did, PDP. It’s great.

My daughter is a nurse, Debbie. A noble profession! The burn unit had a Russian sailor who was burned aboard ship and flown ashore for treatment. I realized I could not get past the sympathy I felt for him. It disabled me.

The firefighter here showed the children the gear and dressed in it, telling them never to be afraid if they see one dressed this way. It was a great experience, Celia.

Our lives are affected, for good or bad, by the teachers we encountered in our lives, Linda.

You did so many things in your life, Joanne.

It's nice to think that every generation of women has more professional choices than the previous one did. I'm glad Caitlin was able to meet and speak with firefighters. It looks like she had a good time.

Men in nursing, secretarial work or primary/elementary teaching were not common either, John. We need men in all areas too.

It’s interesting where you start and where you finish a career, isn’t it, Jan?

My husband’s grandfather promised him a pony when he was young. He has never forgotten the promise and the fact he didn’t get one, Diane.

If we could relive our lives, we’d make different choices sometimes, SW.

I’m still working on it too, EC. Evolving, learning. When I stop...

You said it, Debra!

I find the education training useful in many areas of life, especially at home, Andrea.

I always love hearing what kids want to be when they grow up, mine has said artist and zookeeper.
Love the fire hat! It's so fun for kids to get to sit in the firetrucks. The other day, there was a police car in front of my house with the lights flashing, I looked to see what was going on and the office was just showing it to some kids who looked very happy to turn the lights on and off!

One of my Grand children is 18 and stumbling along wanting only to be a bum. He has worked a couple of short stents at fast food shops but as I said just stumbled along. He just started a retail job at a popular style store and low and behold he loves it. How does a wanna-be bum find standing on his feet all day in the Black Friday shopping culture exciting? I certainly didn't see that coming. Hope it lasts.

I remember wanting to be a ballerina then later an ice skater. Not taking into account the fact that I was the least physical person I knew. My mother followed her father and brother into their University and became an engineer. She graduated as their first woman Architectural engineer. The one thing I knew that I could do from age four was draw.

Now a days the young people have many choices. I wish the best to your granddaughters!! It would be nice to stay around and see what the new generations are going to do.

It is great for young women today with the choices open to them, Danielle.

That is great PR for the police with the kids. The kids should feel like they can approach the police too. Good to see that, Jenn.

It is a good start for your grandson, Barbara. Maybe it will be for a career or maybe it will only be a part of bis journey. Eighteen is young today compared to eighteen years ago.

Your mother was well ahead of the times, Mage.

It would be lovely to see the grandkids as adults. However, that is unlikely. Instead, we enjoy every minute we have today and live in the moment, Angela.

Your granddaughter is a cutie! :)

It is changing, slowly, Catarina.

I must agree, Catarina.

What fun! Your grand-daughter is adorable :) What a good idea to get children comfortable with unfamiliar people who might save their lives one day.

Such an important lesson for children, Jenny.