In many ways it is a step back in time. Old Town Lunenburg is a Unesco World Heritage Site on the south shore of Nova Scotia. It is colourful, with some unique architecture, art galleries, museums, tall ships, including the Bluenose II and a huge variety of seafood.

We took the horse drawn carriage 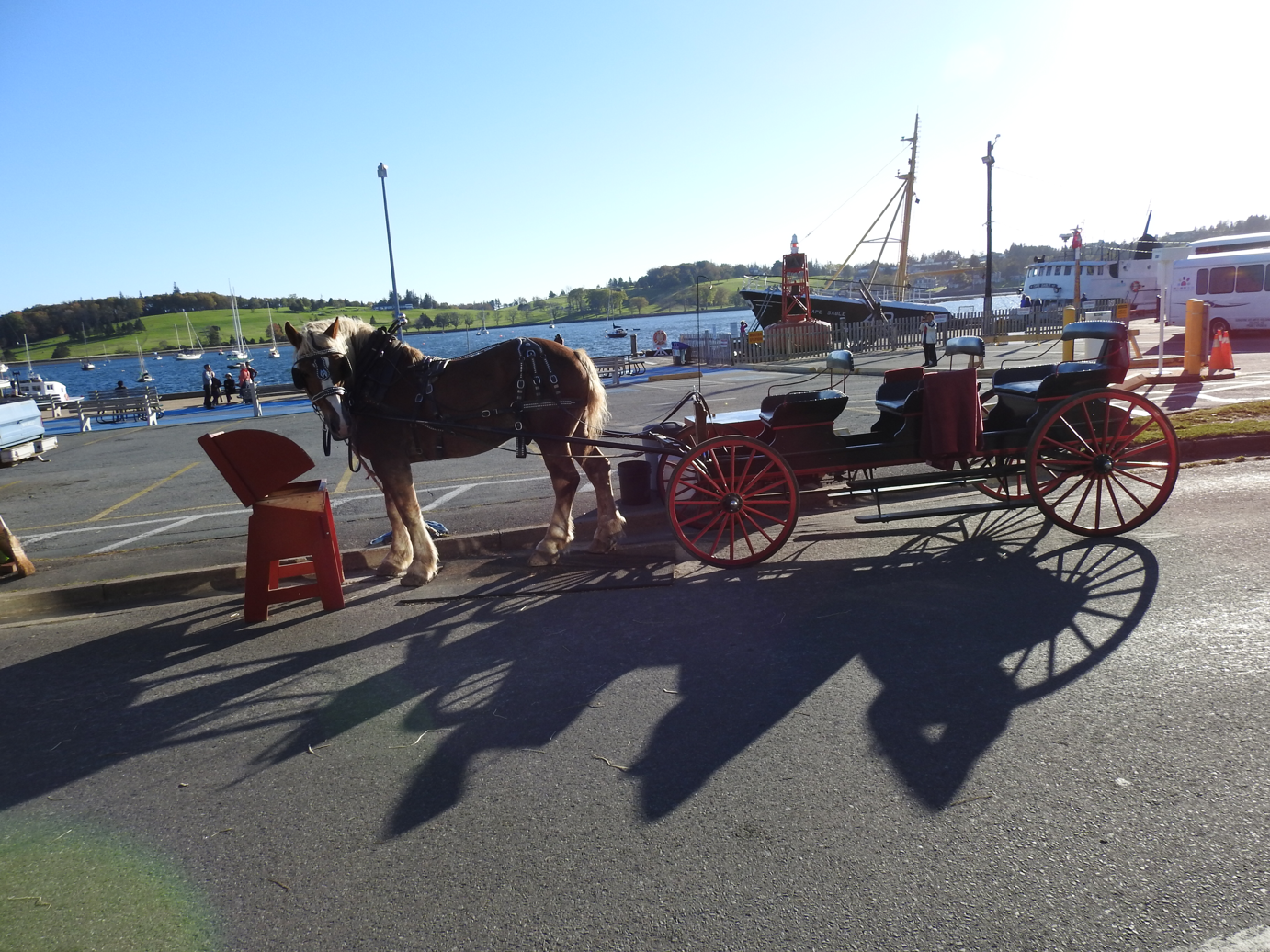 around the Old Town to learn the history and see the sites with a local guide. The town is an example of British colonial urban planning, with straight streets and square corners.

People who settled the area were involved in the off-shore Atlantic fishery which is still part of the life of the community today, though to a much less extent. It was settled in 1753 and the oldest homes still sit proudly on the narrow streets today. 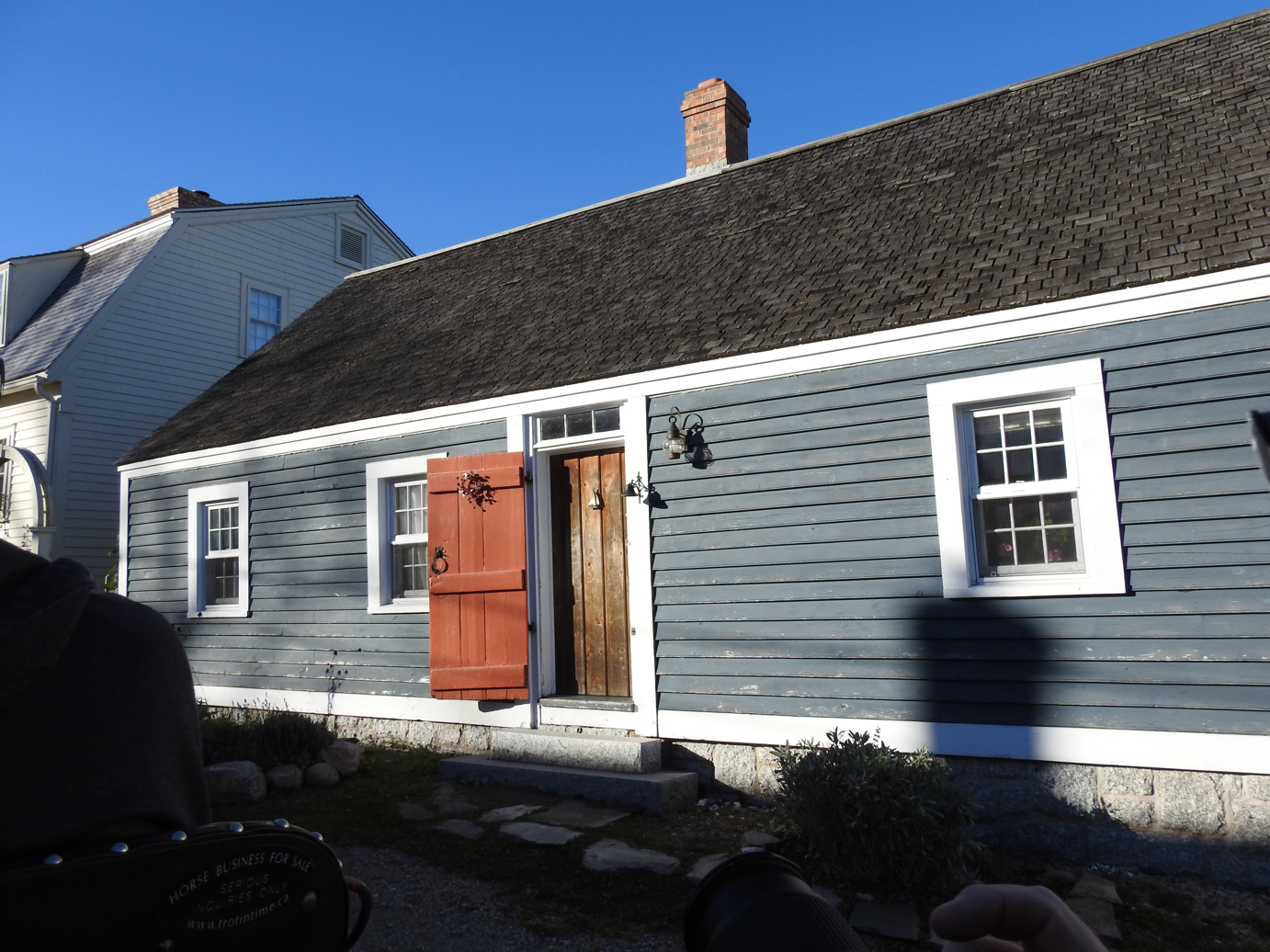 The Lunenburg bump is a unique architectural feature on many homes in Lunenburg. The dormer, often five sided, is above the door of the house and was an indication of the wealth of the home owner. 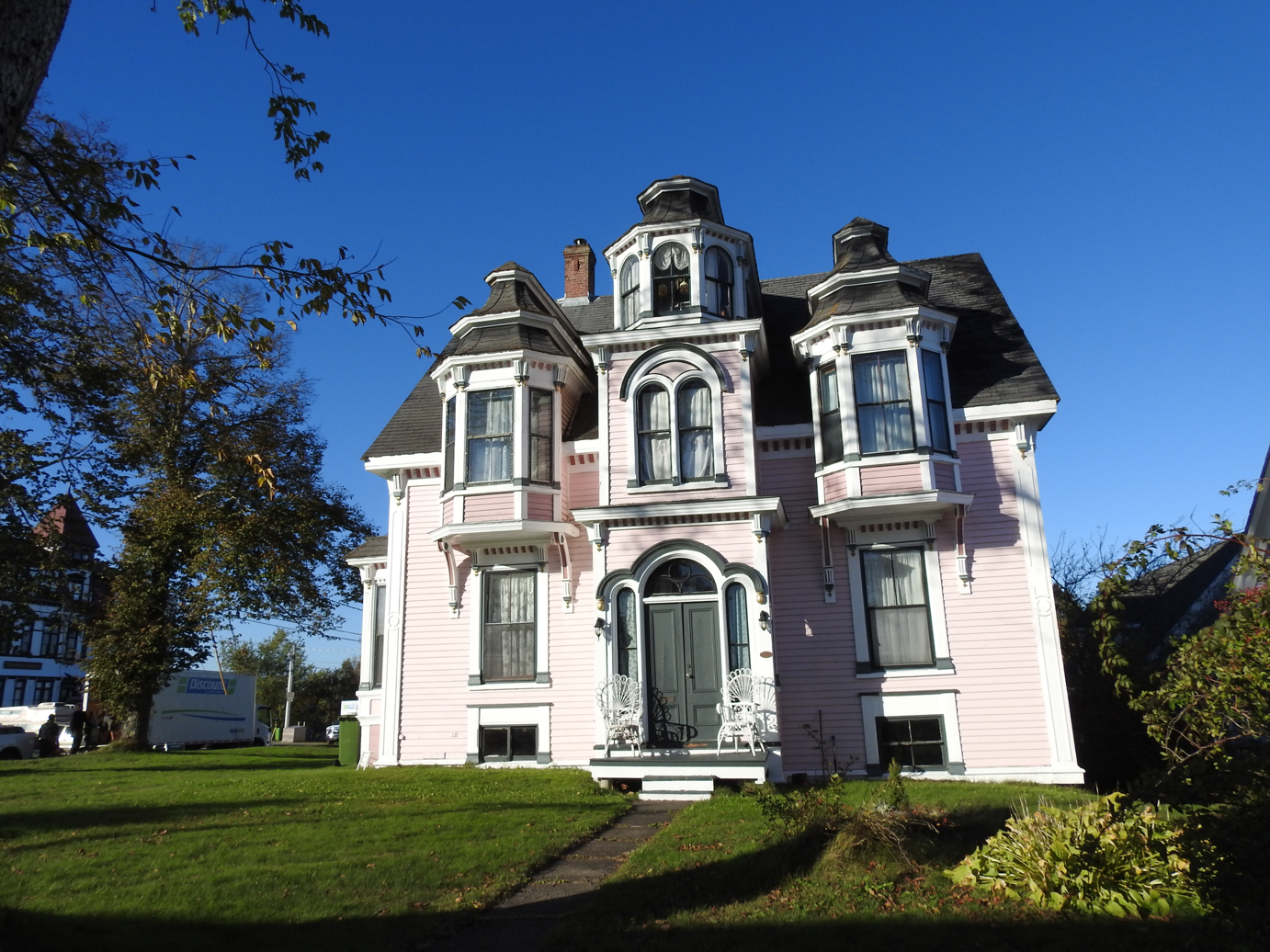 The homes and buildings are brightly coloured and well maintained. 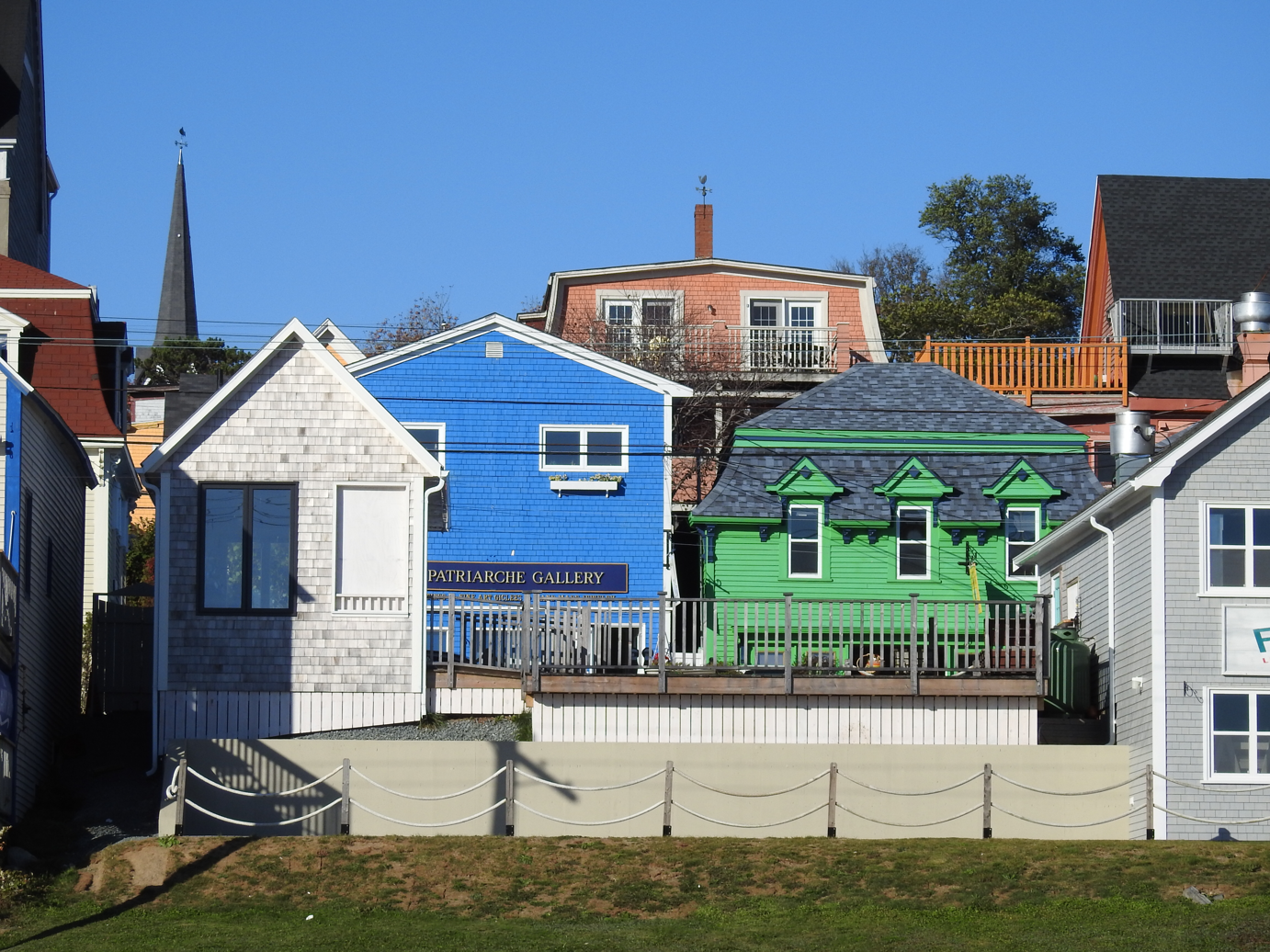 While we were there, filming of a movie, starring Danny Glover was underway. While in the horse drawn carriage, we passed a vehicle rigged for a street scene. The photo is poor quality. 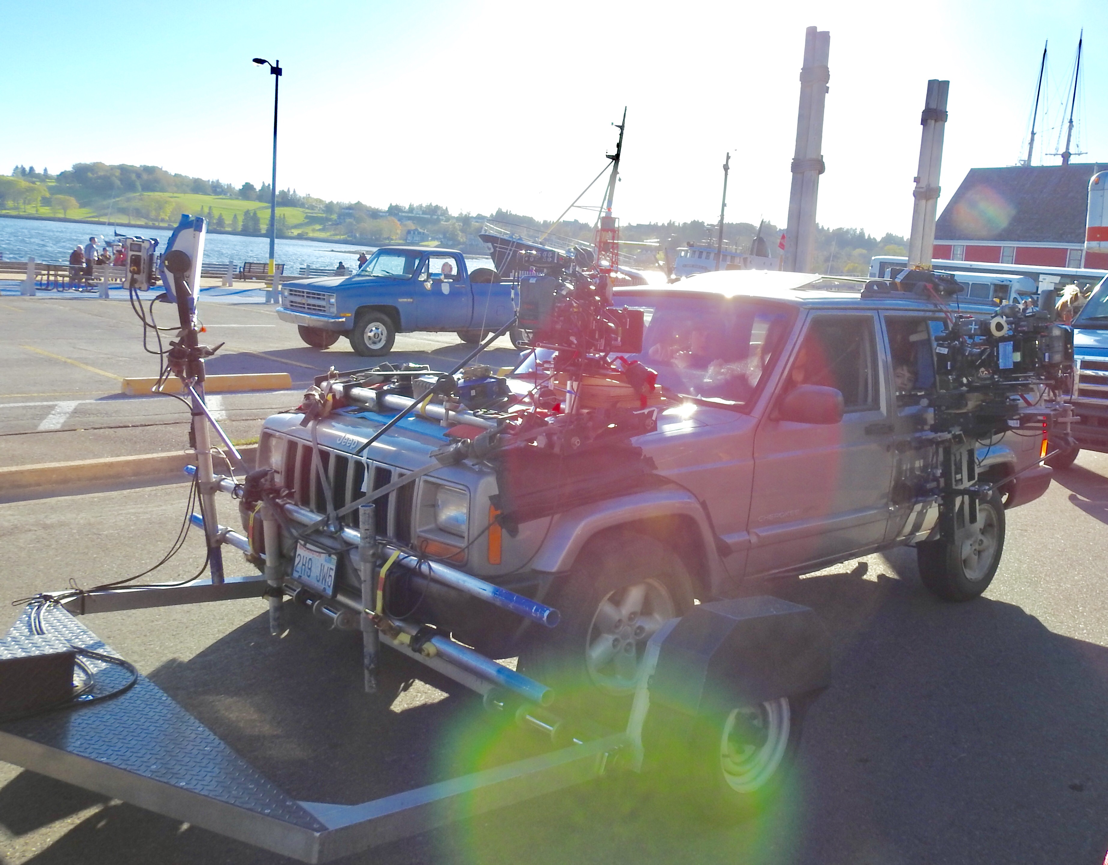 Lunenburg passes for New England towns in many movies and tv series. 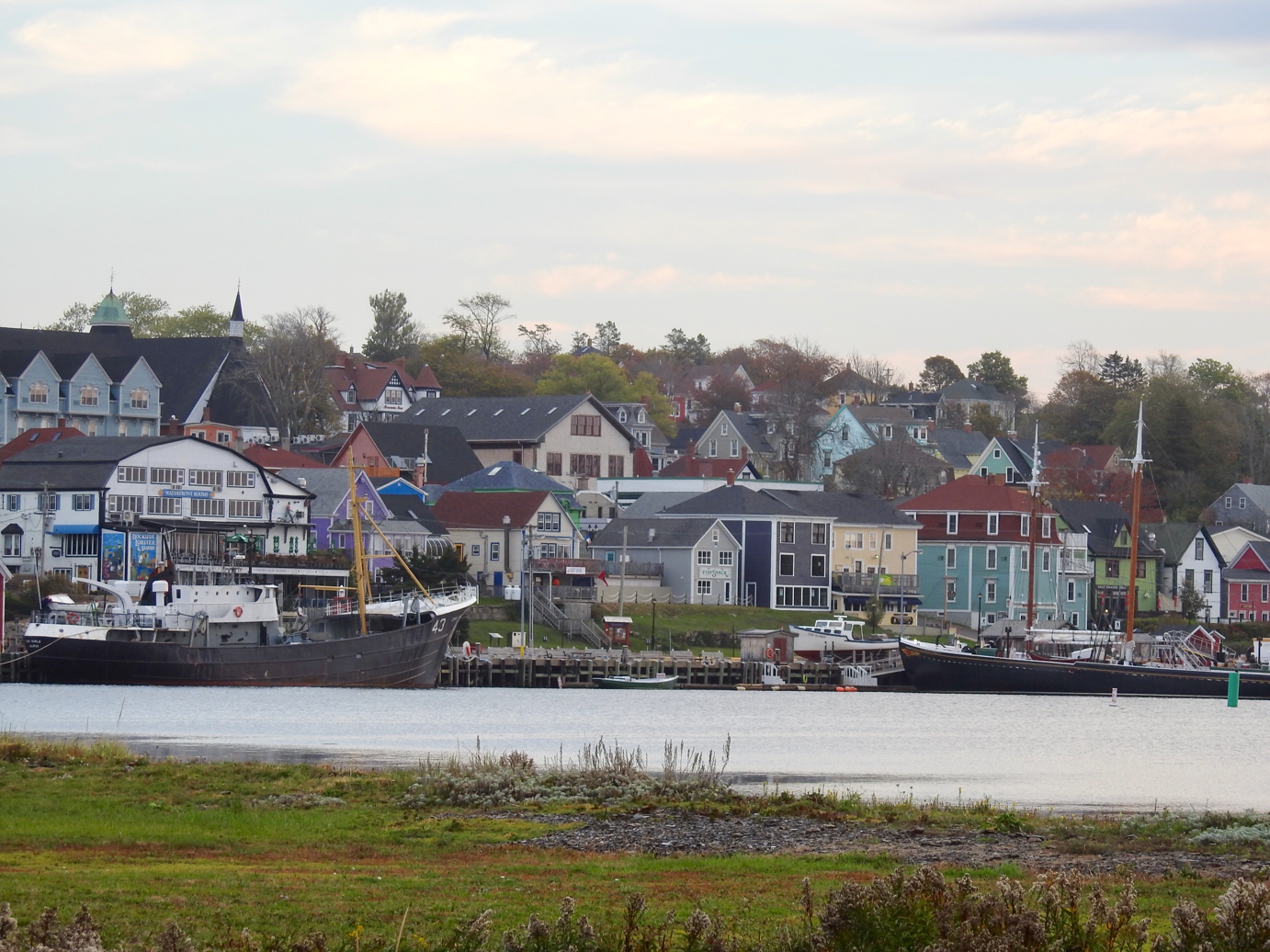 The Fisheries Museum had closed the previous weekend but we saw the Bluenose II tied up by the dock behind the museum. It is a replica of the original Bluenose, the fishing and racing schooner which was built in Lunenburg and launched in 1921. 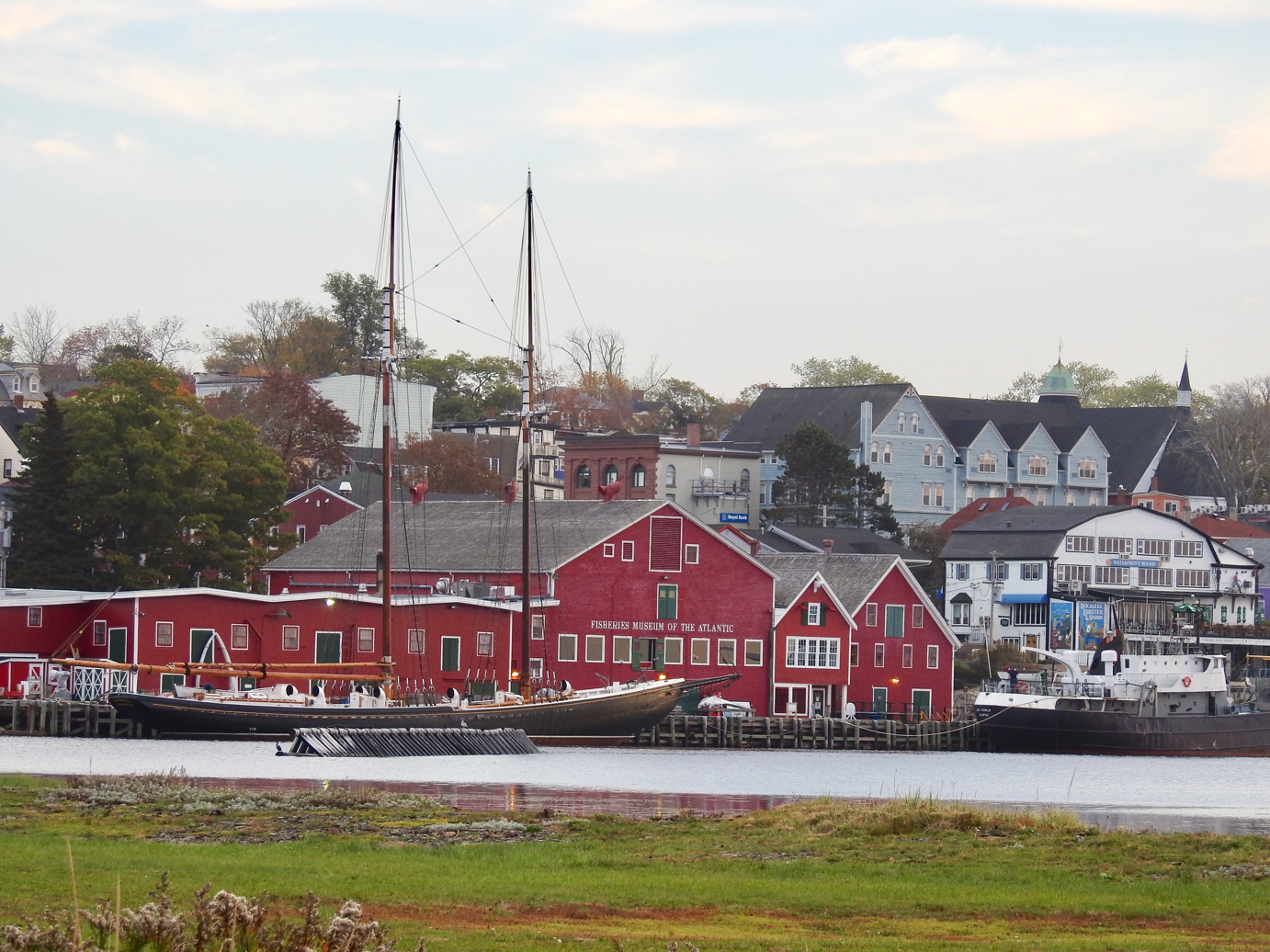 The vessel competed in the Fisherman’s Trophy Race that same year and for many years after, winning numerous races which had formerly been dominated by the Americans. The Bluenose is depicted on the Canadian ten cent piece.

There were several tall ships in the harbour at Lunenburg besides the Bluenose II, including the Picton Castle, 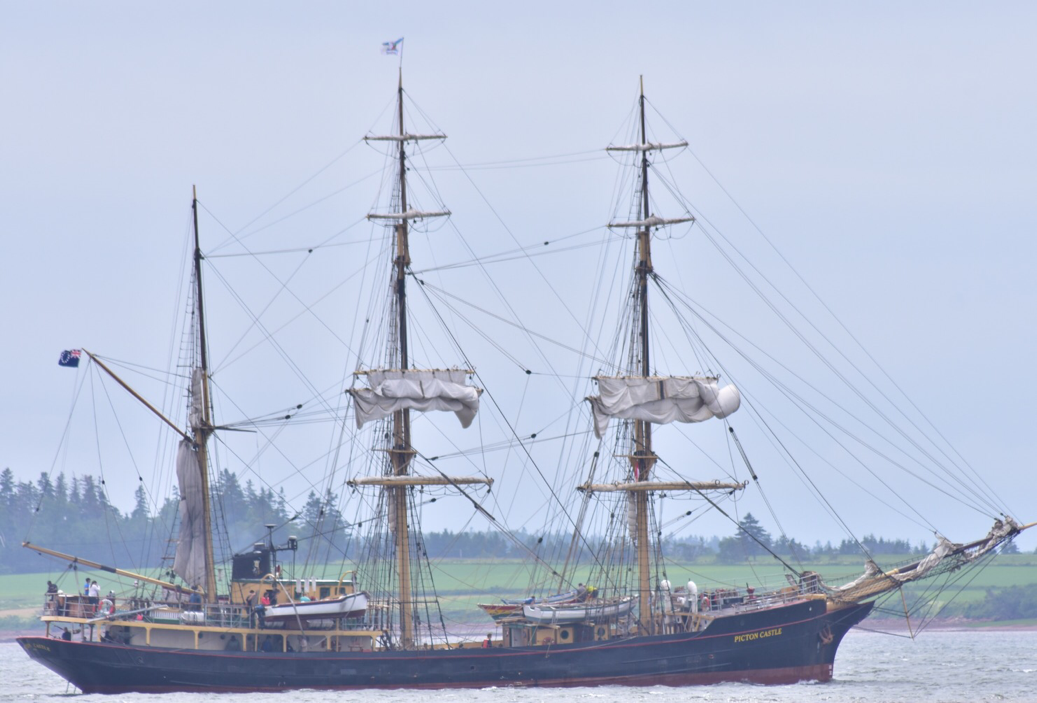 which was in Summerside, Prince Edward Island this past July.

We stayed at The Rumrunner Inn and had dinner at a nearby seafood restaurant. The ample platter of varied seafood was delicious. 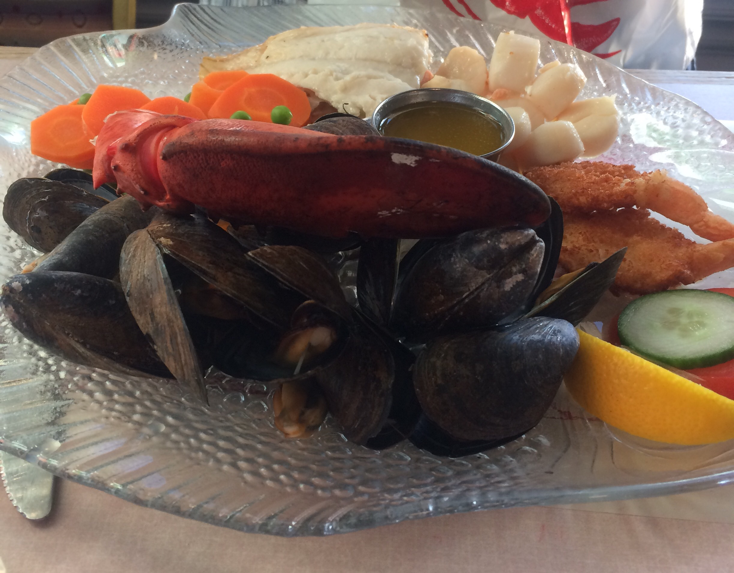 My husband and I enjoyed our time in Lunenburg and intend to visit again next spring to take in more of the history and charm of this seaport treasure. 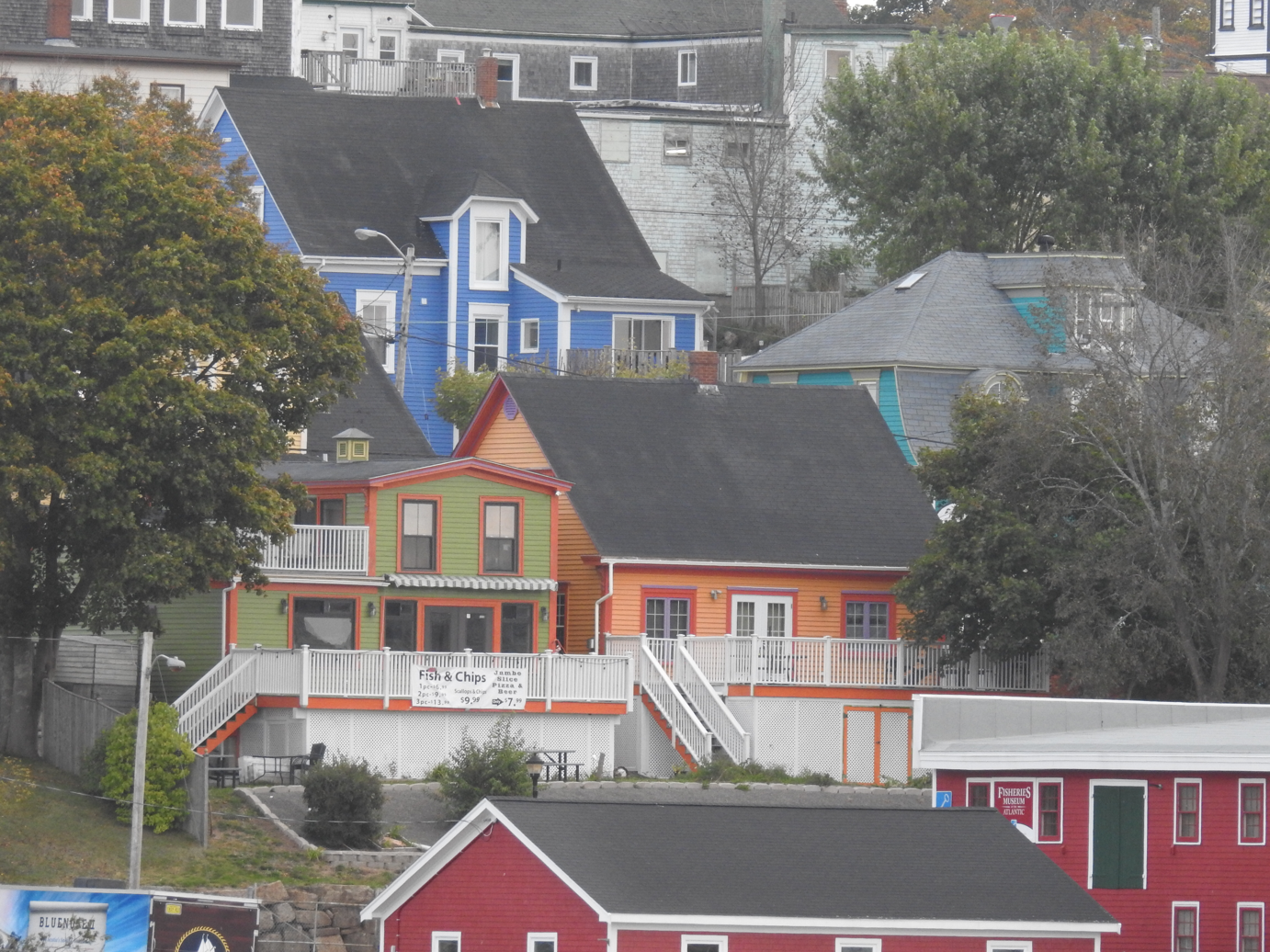 I love Lunenburg. So picturesque and charming!

What a quaint town. I wonder if it's my English heritage that makes me like straight streets and square corners. :-)

We stopped there briefly in 2010. I recognized the red buildings. It was quite touristy in summer.

What a delightful place to visit and I enjoyed the tour around the town with you, seeing all the brightly colored and well-maintained homes, the beautiful fishing boats and how I love the look of that seafood platter you enjoyed, oh my it sure did look delicious!

Land shapes the town and people. I find it a fascinating concept. The buildings here must go up; sprawl is not sensible. All so well done.

Some of your photos are not showing up, our connection is slower than slow at the moment! What I can see looks excellent and the seafood restaurant looks right up my street. keep well Diane
Ah, after typing my comment all the photos now show, excellent.

What an interesting town. I wish more of our old buildings were painted in a like manner.

All the colored houses are so cheery. Makes me happy to see.

Wow, wow and wow. I would have taken the horse-drawn carriage option too.
Love this post. I wonder whether the colourful houses are used (as they are in the Falklands) to provide a welcome splash of colour in the colder months.

Lunenburg looks very appealing. I was fascinated by it's history it has a German sounding name although it was orginally populated by the English! I love the wooden colourful buildings. Sarah x

What a beautiful town and I really like those coloured houses. Sounds like you had a fun time.

I have always loved seeing photos of Lunenburg, and hope to see it in person someday. Wonderful photos, thank you for sharing.

It is a step back in time, Jan.

There were lots of tourists when we were there last month, AC.

The seafood was beautifully prepared, Marilyn. The town is pretty and filled with history.

Lunenburg is a place we will revisit for sure. It speaks to our souls, Joanne.

Glad you finally could download all of them, Diane.

The colours there are gorgeous, Celia.

The houses are photogenic, that's for sure, Barbara.

It looks like a very nice place. The movie might turn out to be a fun one. I never think of myself as particularly a Danny Glover fan, but I have seemed to have liked several movies with him in them. He must know how to pick them.

The fishermen painted their boats bright colours, EC. People knew who was returniing home from sea by the colour of the boat. They used the leftover paint on their homes rather than waste it.

Lunenburg was settled at the time when the French and English were in conflict over the New World, Sarah. The English brought German settlers to Nova Scotia in support of their position against the French. One group of Germans settled in Lunenburg.

It is a great place to visit, Bill.

Lunenburg is frozen in time in many ways, Jenn. It's charms will be there for you too.

what a gorgeous fishing town and a great place to film a movie!! the platter of seafood looks very good!!!

You have done an outstanding job of photographing and presenting one of the loveliest towns in the province, Marie. I'm glad you had a good visit!

The town is in many movies, Ratty. No wonder! It is beautiful!

Nova Scotia is a great place for seafood. As is PEI of course!

We loved it Jenny. A return visit is in order.

I visited Lunenburg back in 2000 when the Tall Ships were visiting Halifax. It's a charming town, and hasn't changed much since I was there. Lovely. You must have had a super time. Especially with yummy seafood to eat.

Wonderful historic place! Looks like you had a good time.

It was interesting to see how a car scene is done, Andrea.

I imagine it will stay the same due to its Heritage status, Shammi.

It is a great place to visit, FG.

That's exactly the kind of place I would want to visit, Marie! OMG. Even the name is so European. I'll be glad to see it again next spring!

Very beautiful pictures. My husband would love the seafood.

We will too, Ginnie!

It was delicious, Mildred!

I do not remember if we visited Lunenburg when we passed by Nova Scotia. I would not mind going back and visit the city with more time.

Hi Marie! Just found your blog and love your photos. Your are so well informed! I can tell that you do a lot of research to make your blog very interesting. I tried to find your profile but couldn't. Could you tell me a bit about yourself? I love your blog. I am from Little Deer Isle, Maine and would love to visit Nova Scotia. I write a blog also because i love to photograph the Island and surrounding area.

We will return. It is a treasure, Catarina.

I wrote you, Susan. Thanks for visiting!