The young server passed over the tray containing the coffee and soup. We picked up napkins as we headed to the tables. It had been a long day but we weren’t very hungry. The soup would do just fine.

As we settled in at the table and selected our portions, the little packets of salt and pepper appeared from under one of the soup bowls. We laughed.

“That’s for sure,” my husband commented.

We each tasted from the bowls and looked at each other. “No,” we almost said together. Just as we expected. More salt than we use in a week.

“I guess the server has never tasted this soup. Why would she give us so much of this?” He pointed to the packets of salt and pepper.

I counted them, thirteen pepper and five salt packets, none of which were needed for this soup.

“Pop would have been delighted with these,” I said.

“I know,” my husband added.

My grandfather was one of only three children from a large family to escape  tuberculosis which also took both of his parents. He and the other surviving boys were cared for by relatives, who already had a large family of their own. My grandfather and his older brother both went to work on the Newfoundland Railway as young teens, more than a century ago.

Pop, as my brother and I called him, didn’t have an easy childhood and was forced to grow up too soon. Later in his life, he wasted nothing.

When I was a teenager, I travelled with him. Pop always took some packages of condiments from the restaurants or diners, such as mustard, salt, pepper, sugar, whatever was available in packets on the table. At first, I was embarrassed by this behaviour, but over time put it down to, “That’s just Pop.”

Sure enough, when you went to his house for lunch, the packets were there on display at the table in case you needed any. I don’t know if he emptied the packets as he flavoured the delicious meals he made, but I imagine he did.

Back in the restaurant, my husband and I debated the disposal of the packets. If we put them in the compost bin, it was a waste. If we gave them back to the server, would they be put in the compost anyway? 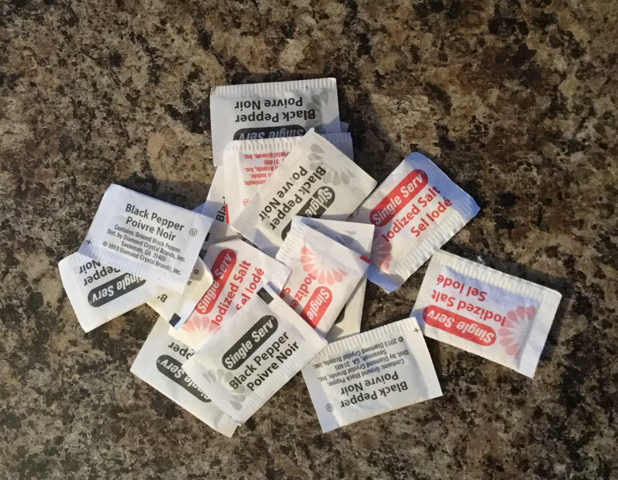 Pop would be proud of me!

Posted by Marie Smith at 04:10
Email ThisBlogThis!Share to TwitterShare to FacebookShare to Pinterest

Made me smile Marie 😊 I have a friend you doesn't use sugar so when we meet for coffee she always takes two sugars, it's amazing how quickly they accumulate.. then when she has visitors who do take sugar, she is prepared 😀

I find almost all soup in restaurants to be too salty. I'm sure he would be proud of you for bringing them home! :-)

Yes, they would probably have been tossed.

We're still the generation that recognizes the behavior. It could be our own, or our friends, or the dear souls from the last generation, who lived the depression. I wonder if millennials tuck sugar packets into their phone covers.

Recycling at its best.

My father was much the same. At one time insurance companies used to advertise a free pen if you asked for a quote. We found dozens of them recently while clearing out the house.

Thanks for sharing your story about about Pop. We used to save those little salt and peppers and take them with us camping until it turned out we never used them. Wonder if they toss the little packages of saltine crackers that sometimes come with soup.

a cute story!!! i always take the extra's and use them when we picnic. i often make sandwiches for a road trip and bring a few along for those also. i never waste them!!!!!

Great story and totally relatable. Loved it. And funny. And now .. your own collection started. Cheers to you and boogie boogie.

We stopped adding salt to our food a long time ago. And himself still collects the salt and pepper packets every chance he gets.
A memory filled post today. Thank you.

Great story, Pop was ahead of his time. I haven't used salt in decades but I do like pepper.

It is a good thing not to waste! Those can surely be used at home and you payed for them anyway.

My sister collects these too. She collects anything that might be kind of free.

In my local supermarkets cafe it's a similar thing, but with sugar. After I finish my shopping I always go in the cafe for a latte before setting off to my house in the intense cold of a British summer. When the serving wench brings it to my table there is usually about eight packets of sugar on the tray. Who even needs sugar with a latte? I'm sweet enough!

So true, you might as well take them home! When my mom would go to the hospital to have a baby (she had 7, and I was second oldest so I can remember a few, well five, times), she would not use her jam on her toast and bring home those cute little packets to us at home. We were so thrilled to get those! lol. Now you can buy a giant box of those at Costco! (I did once...wasn't the same...plus they expired too quickly for us to use up!) Andrea

It appears to be a common practice, PDP.

I’m going to use the pepper for our picnic sandwiches!

Pop is smiling on the other side, Jan.

I feel sure they would be, AC.

I wonder too, Joanne.

It sure is, Tabor.

Lol. Waste not, want not, John! Hope there are lots of pens on the other side!

Forgot about the crackers, Celia.

A lot of us do the same it seems, Debbie.

Thanks for visiting, HW.

Many of us keep the packets it seems, EC.

We use very little salt. Pepper and other spices add lots of taste.

My grandfather always said he had paid for the packets anyway, Angela.

Lol. You are indeed, Keith!

That’s a great story, Andrea. It appears that our experience of something is closely tied to the situation in which it is used.

and just think of all that paper packaging, what a waste, even if you use the salt and pepper, the packaging ends in the garbage. We are a disposable society.

Qwe do not even cook with salt!! Hope all is well. Diane

In California, any food item, opened or not, that is in contact with a customer's hands, cannot be re-used.

Speaking of which, my eldest grandson, when he was young, used to use the sugar packets at a restaurant table to mimic an ice hockey game with players being the packets. :)

I usually take those packets to work since we never seem to have salt and pepper in the break room.

If kids are cleaning the table they probably throw everything possible away - if they were my kids it would include the silverware. LOL. My Grandmother would take home items like this. It embarrassed my sister but I always saw it as waste not want not.

I always take them home - and use them, too. My parents came from families who struggled to put food on the table, so they were savers, and it has been passed down to me. Or maybe it's just in a person to start with. I don't think my brother ever bothers with things like that.

Your grandfather had a huge blow to lose all his family except two siblings. We take for granted our good fortune, I think.

Thank you for your comment on Aunt Lucy. Actually, she was my mother's guardian....my mother's mom died of TB when mama was 8. Mother's dad was killed in the war and her maternal grandma died one year later. We shared many happy holidays with Lucy. My mother had TB also as a child but survived. So sad about your grandfather and how TB devastated his family. These days, we don't use ANY salt in our diet. When we eat out, it is amazing how salty some things taste!

This is funny! My grandma and my dad both do this. My dad still will go to places likes car dealerships or banks in the morning just for the free coffee. I love the places that give out those little mini glass jam jars. There are useful!! lol it appears the apple does not fall far from the tree.

You got a big HA from me, Marie, with this post. My dad was such a conservationist (don't know if he collected packets of condiments, however, because I'm not sure he ever went out to eat) and instilled it in me. If Astrid and I get packets of sugar with our latte macchiatos while out-n-about, we always keep them for guests when we serve them coffee at home...because we almost never use sugar for anything. Same with honey packets, etc. As Astrid and I often say, "We're not stupid." :)

We truly are. This province has a top notch recycling program as does Nova Scotia, Shammi. Here the empty paper packets are recycled.

Salt is limited in our house as well, Diane.

Lol. Kids can find fun in unusual ways. How creative!

I think the same is done here with anything touched by the customer, SW.

Waste not, want not, is a great rule to live by, Barbara.

They often do, Catarina. We will take the pepper packs for the home grown tomatoes we bring on our picnics and add to our sandwiches. I’ve done it before.

I agree that modern health care has made us take so much for granted these days, Jenny.

Saving is a great thing. I learned it well from my family too.

I agree about restaurant food, Mildred. It doesn’t require too much creativity to load the food with salt rather than other spices and herbs.

You Mom had it hard too, Mildred. You are testimony to the success she had in life in spite of the difficult times.

Lol. Well done you two! Such a great use of the packets!