It’s not the trees which are the attraction at Peggy’s Cove in the fall or at any other time of year. For many, it is the rocks, the granite, which brings thousands of visitors to this Nova Scotian mecca. 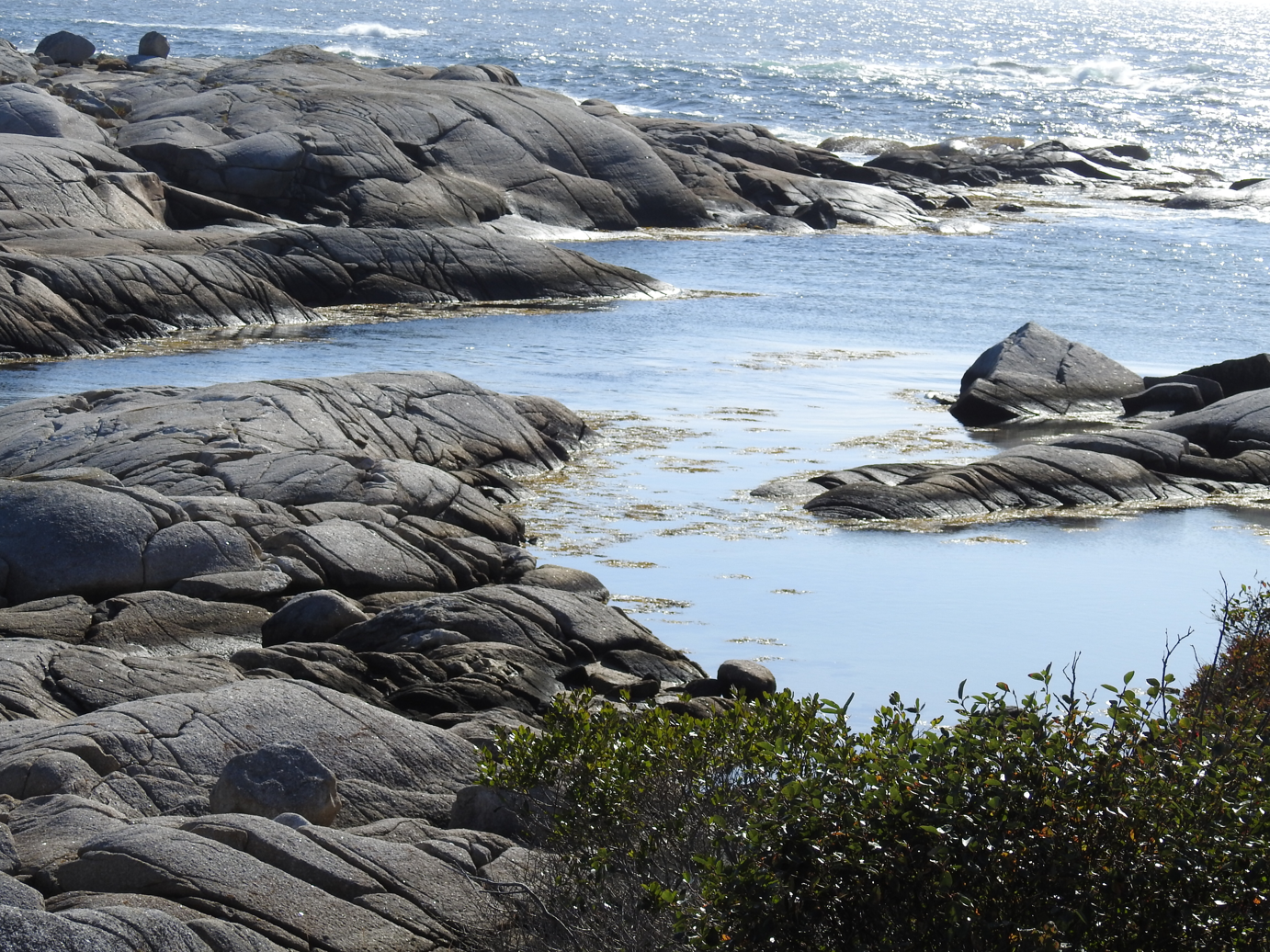 The contrast of the sea and the unusual rock formations, with the lighthouse as the beacon, is a combination which people love and thousands of visitors come to see each year.

Peggy’s Cove sits in St. Margaret’s Bay, on the south shore of Nova Scotia. It is a fishing village at its heart and the signs of the trade are everywhere. The tiny cove, with its crystal clear water, is lined with fishing stages, gear and boats. The rock is unique in this area. Pushed up from below or within the earth’s crust, the molten rock or magma, cools forming igneous rock, in this case, granite. The granite at Peggy’s Cove has various crystals which expand over time and slough off the exposed surfaces, producing rounded rock faces. The granite was further affected by the receding glaciers of the Ice Age. The glaciers carried rocks along with them which scratched the surface of the bedrock, leaving striations or furrows behind. 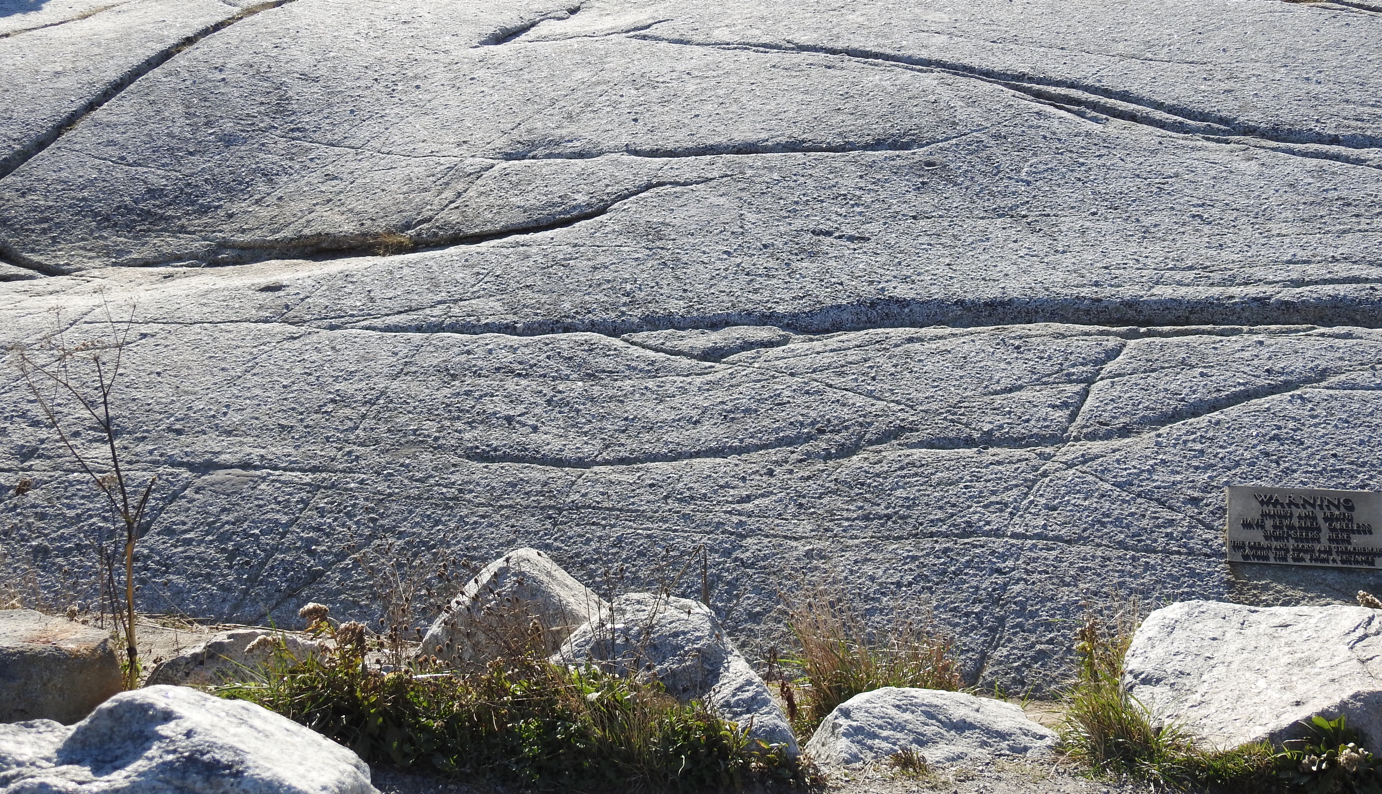 As glaciers melted, they left rocks, known as erratics, on the landscape. Add in the lighthouse and you have a rare treasure. I was amazed by the rocks of Peggy's Cove the first time I saw them -- never saw anything like them before! (Or since!)

Such a beautiful place! I can see why so many visitors come to admire it. Thank you for showing it to me, Marie. :-)

it is a gorgeous place...a place we all should see. and such a pretty lighthouse!!

In my one chance to see it, I drove right by because it was pouring.

Simply sublime.
We live in SUCH a beautiful world. Thank you.

Just like a fishing village should look. Your photos present it beautifully.

What beautiful scenery. The fishing village and the lighthouse, priceless!

I would love to visit there, it's so good to see it from your blog. Sarah x

I know Debra. It is a unique place.

The day we were there in late October, there was a huge crowd, Jan. Passengers from cruise ships in nearby Halifax travelled to the cove in tour buses, taxis and limos. We couldn't believe the crowd!

It is a beautiful place, Linda.

It is beautiful and so unique, Debbie.

It would be worth getting wet for the sight of that cove, AC.

It truly is an incredible world, EC.

The rocky coastline is so unique too, Bill.

It is worth a visit, Sarah.

It felt like a Geology 101 field trip, Tabor. Spectacular.

I would like to go back and spend more time in NS. Very beautiful.
: )

Your pictures are the nicest I've seen, Marie - including the ones used in advertising. You've caught more detail and more colour!

Classic set of glacial features - I love finding things like that. And I have to say that the sea looks like it may be a good place to snorkel as well - although I suspect it may be a bit chilly!

The pictures you put up are just pure art! I don't know how you find the time to post every few days! And of course you have to edit the pictures before you put them up. If this is so then who does all the shopping, cooking, cleaning decorating etc? You live in a beautiful place; it's paradise compared to my area with it's dirty streets, vandals, muggers, and other dangers, I daren't go out alone when it's dark!

Those rocks are amazing, I would love to see that part of the world but it is highly unlikely that I ever will. Great photos thanks for sharing. Have a good day Diane.

That is different. I've never seen a coastline like that. Very pretty in its own way.

It is a great place, Catarina!

Thank you, Jenny. I point and shoot and do little to edit afterwards.

The water is cooling now, Stewart. Summers would be OK for snorkeling.

Keith, I edit very little on my photos, i do the blog from an Ipad. The writing takes the most time. I do that on the weekends.

My husband is a true partner and has always done his share of everything in our home and with our child. We are not slaves to housework, though we cook rather than eat out much. Again, my husband cooks as much as I do.

It is beautiful in Atlantic Canada. We feel safe here, on the trails and roads, in our neighbourhood, night or day. We are often the only ones on a trail and have never been concerned for our safety. I wish you could experience the same!

The air there was clean and frest, Andrea.

The rocks there are remarkable, Diane. I was glad to share that area with you.

It is truly unique, Barbara.

We just loved the smooth rocks at the lighthouse!

They are so unusual, FG. They are a wonder.

I visited Peggy's Cove in 2000, but have not had the opportunity to visit since. Such a lovely place but I was appalled at the crowds of visitors climbing all over the rocks and getting themselves much too close to the waves. Sadly, the prettiest places get run over with tourists.

What an amazing place to visit and I appreciated you sharing about the history of the rocks. You got some wonderful photos of Peggy's Cove! I especially like the last one of the rocks, sea, lighthouse and sky... amazing!

The blues are incredible there, SW.

Even late in October, there were numerous buses, limos and taxis there. Thousands of people from a cruise ship in Halifax were everywhere, near the water’s edge too, in spite of the signs. I can only imagine what it is like during the peak season, Shammi.

It is a place of amazing natural and human made elements, Marilyn.