Hats, mitts, snow boots and winter coats made the cold bearable for my husband and me as we finished the last of the garden work for this year. The hated job of tying up the barberry bushes, trying to avoid the long thorns which protect them, makes us put off this job every year. 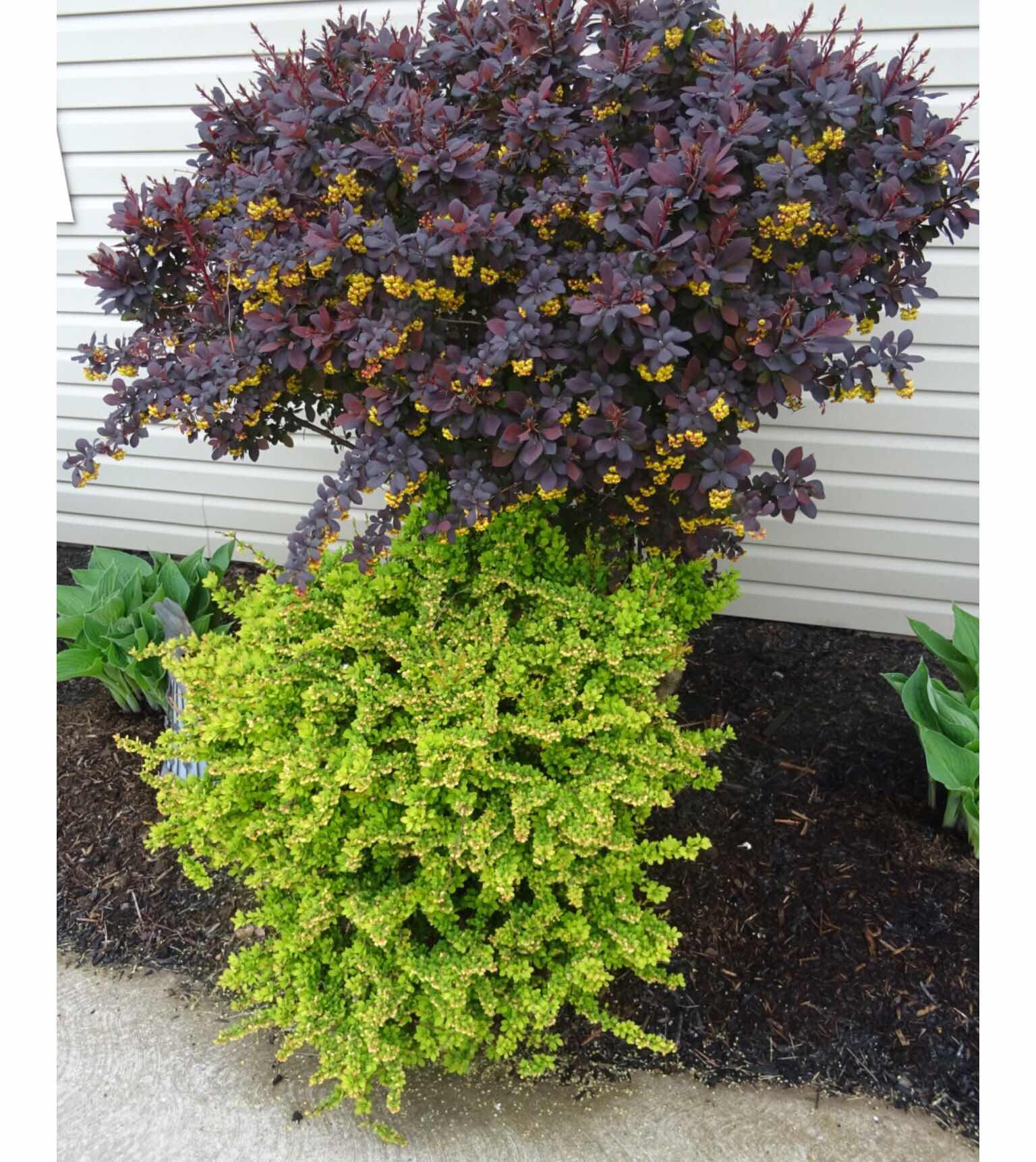 The barberry bushes in better weather

Earlier this month, on a warmer day, I had trimmed these bushes and discovered a bird’s nest in the tallest of the four plants. 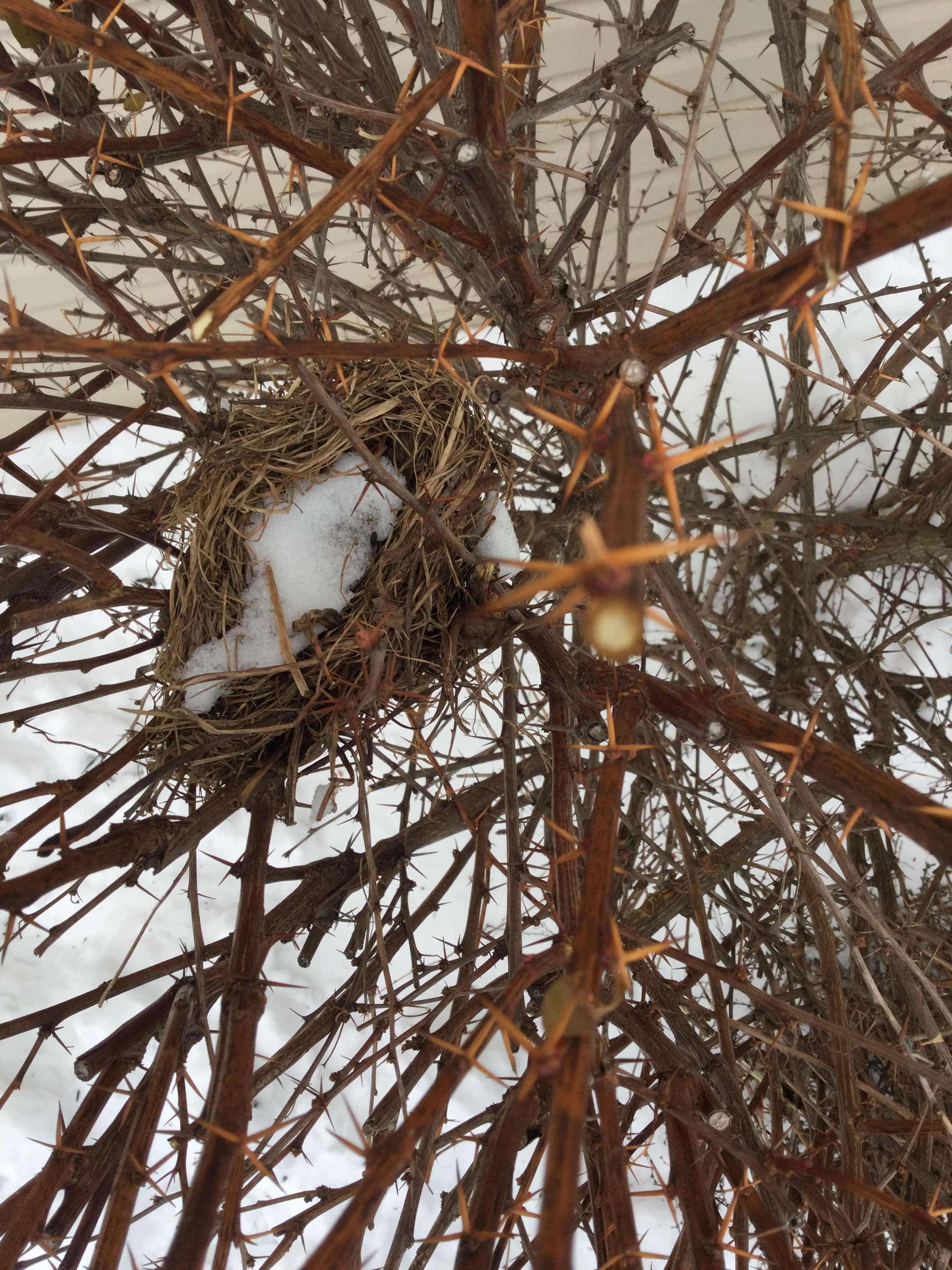 We knew there were nests among the plants in the front yard but it wasn’t until the leaves fell that this nest among the branches and long thorns was visible. We believe it’s the nest of an American goldfinch.

One day in late August, we observed a female goldfinch, coaching a fledgling, on a branch of a Potentilla in proximity of this nest. When she was aware of our presence, she flew to an overhead wire and sang her best melodies, in a effort to divert our attention away from the young one. 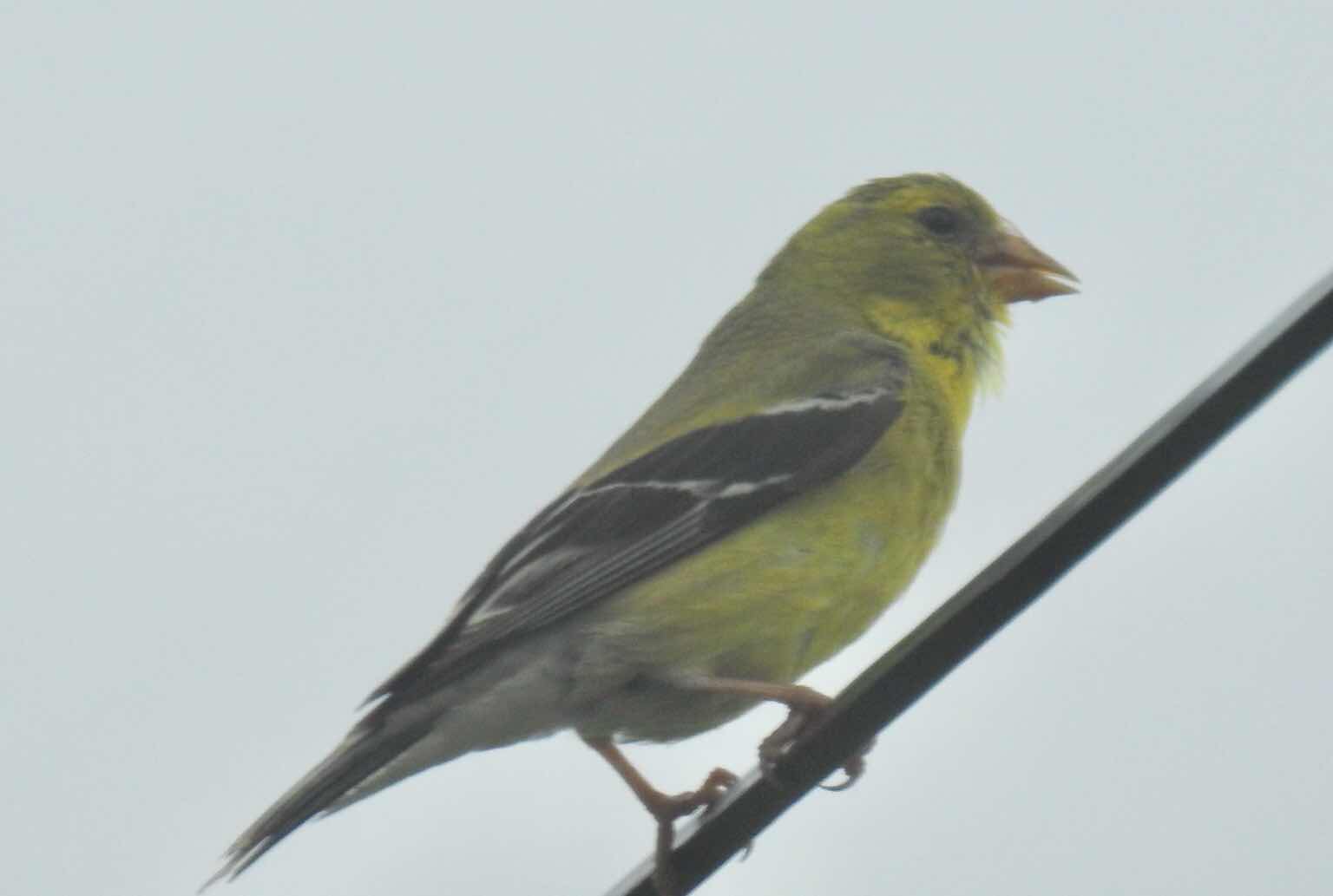 The chick looked nothing like a goldfinch, with its wispy head feathers and its dark colouration. 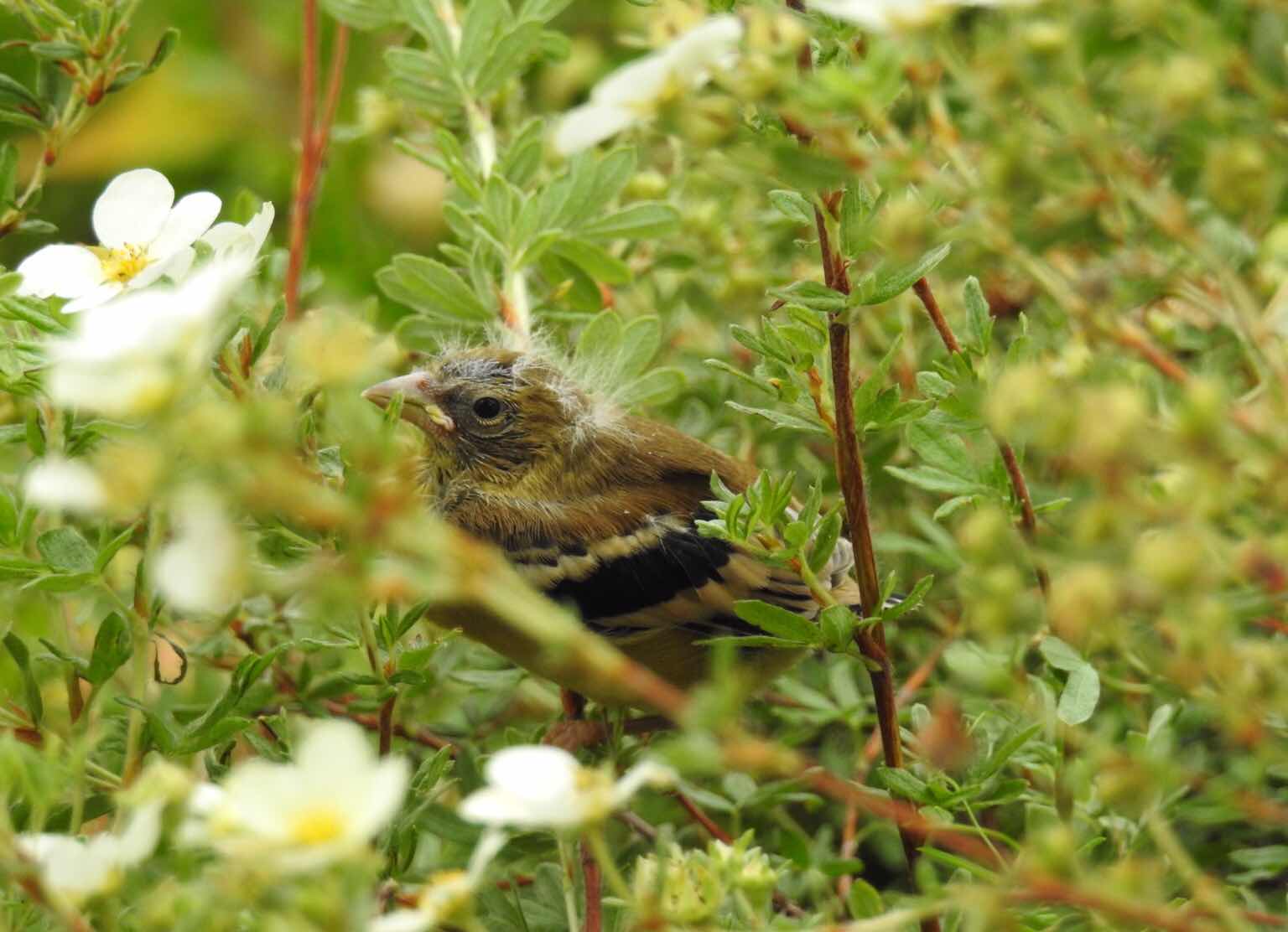 Later in the day, both birds were gone.

We also covered our male and female holly plants with burlap. I have nursed this pair for four years now and the female is growing beautifully. Despite my best efforts, the male is stunted and every winter, I lose a bit more of him. However, as small as that plant is, the female plant has berries, so he is doing his job, as tiny as he is. 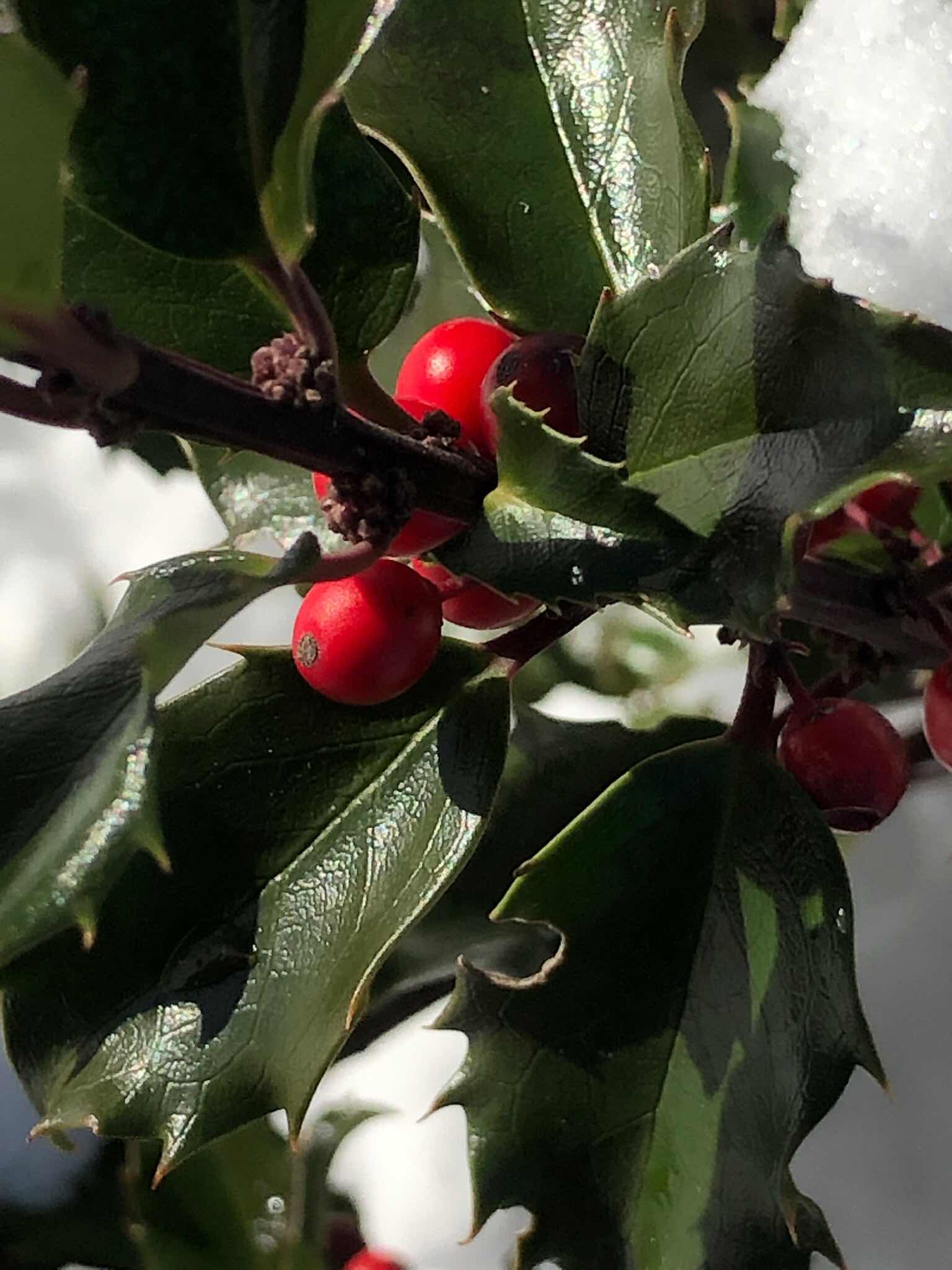 Gardens are a wonderful way to interact with nature at your doorstep! How fortunate are we who can participate in the wonder!

I love your story about the goldfinch family. And you're right: that little scrawny thing looks nothing like a goldfinch at that stage. Your hard work will be worth it all come spring. :-)

Hello, love the Goldfinch and nest story. They are sweet birds. I am thankful for my hubby doing the back breaking yard work. Enjoy your day.

That chick was almost too young to be leaving home. Bon voyage.

that sure is a thorny spot to place a nest, even when it has leaves. the holly, with it's berries, is really beautiful!!

I have yet to remove and store fencing from the garden ends. That needs to be done so I can till in the spring.

You obviously do take good care of your garden.

The agility of birds in that nest dodging the thorns blows me away.
And a definite hooray for gardens (and their inhabitants).

Lovely photos and the story of the Goldfinch. I have to get out here and tidy up the garden, but I cannot cope with the chill that has just arived! Keep warm Diane

Such a funny sweet little chick. Those thorns, that Mom sure knew where to hide a nursery.

We do not protect our holly in any way and it goes through very harsh winters. I also love that barberry but it is invasive here and we can not grow it.

Beautiful bird and baby bird...the American Goldfinch is my favorite! I have a barberry bush...perfect protection with the thorns, for the birds! Today the deer were eating all my berries on them! Andrea

Lovely stuff indeed. Have you got leather armor to ward you from those thorns? Gosh they do look dangerous.

You can grow holly in PEI? I had no idea. I thought the climate would be too cold.
Certainly very cold here right now. -13C overnight. It's far too early to be this cold. My brain just can't cope!

You have some nice, well-tended plant in your garden.

The barberry bushes look so pretty when flowering Marie, wouldn't think they could be so thorny under all that lovely foliage! Couldn't agree with you more re the garden, to contemplate nature close up there is nowhere better ✨

Even though I love gardens, I am not a good gardener.

You always amaze me by what you know and do with Mother Nature, Marie. BRAVA to you and hubby for braving the thorns because in doing so, you have unearthed these treasures.

Lovely story.
I recall a similar experience long time ago, when a gardener trimmed in my garden
Sadly the bird never returned though...
Have a good new week.

You have been busy, and found lots of interest in the process :)

That does sound like the kind of job it would be tempting to put off. I hope both of you holly bushes make it through the winter.