He stands in the harbour at North Rustico, Prince Edward Island. The fisherman statue represents the Acadian fishers of the 1920s who used handlines to catch fish, an environmentally friendly method which was labour intensive. His right hand holds the handline and in his left, a fish. 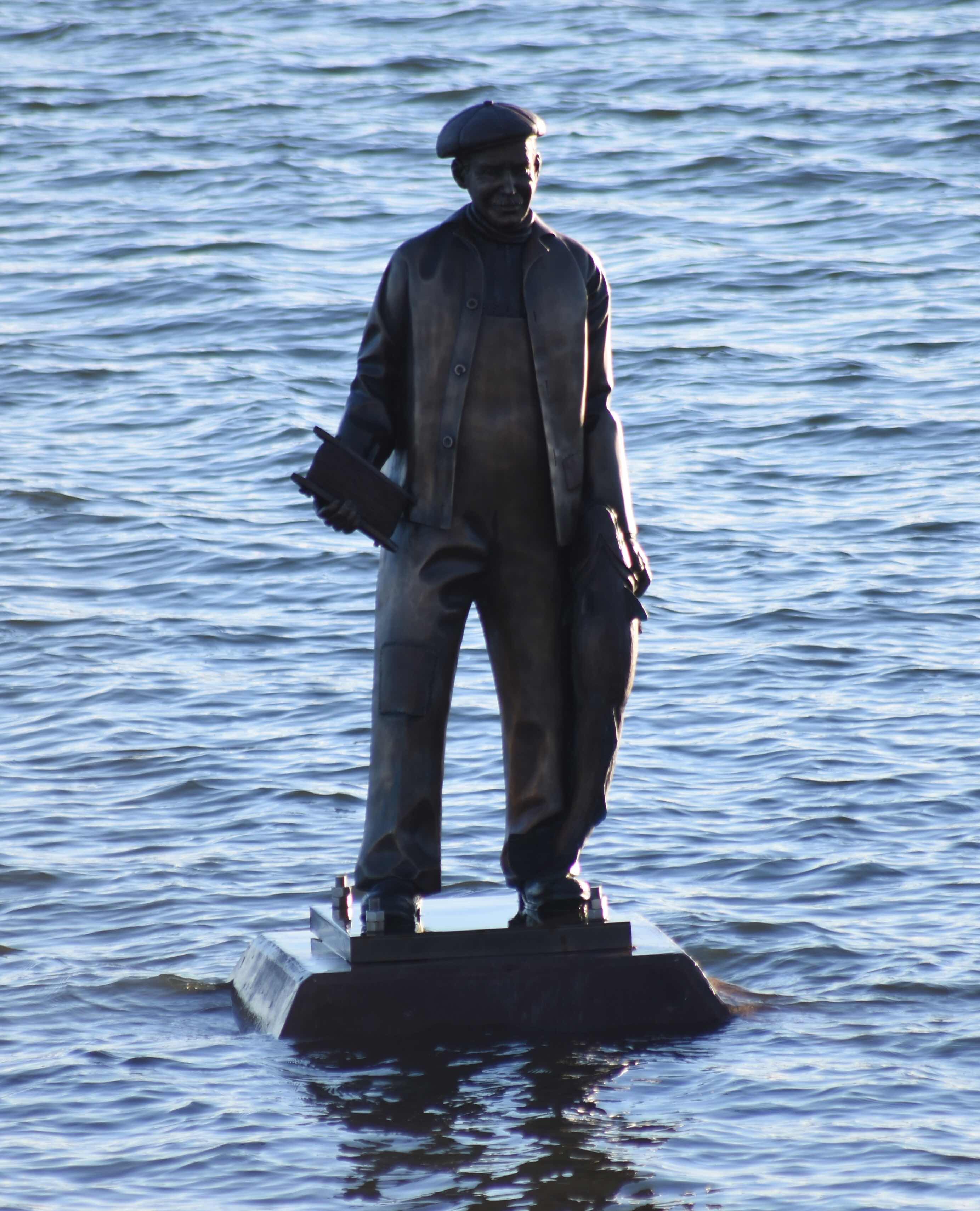 The Indigenous people, the Mi’kmaq, had camps in this area 6000 years ago. White men sailed along this shore in the 1500s. In the 1700s they began fishing this area and by 1800, Acadians had settled here. Their descendants still live here today.

The statue illustrates the importance of the fishing industry to the area. Fishers can trace their ancestry back through many generations. The sea and their quest to feed their families and make a living have shaped who they are.

As the sun goes down, the bronze fisherman stands in the dimming light, the water lapping at the base which supports him. 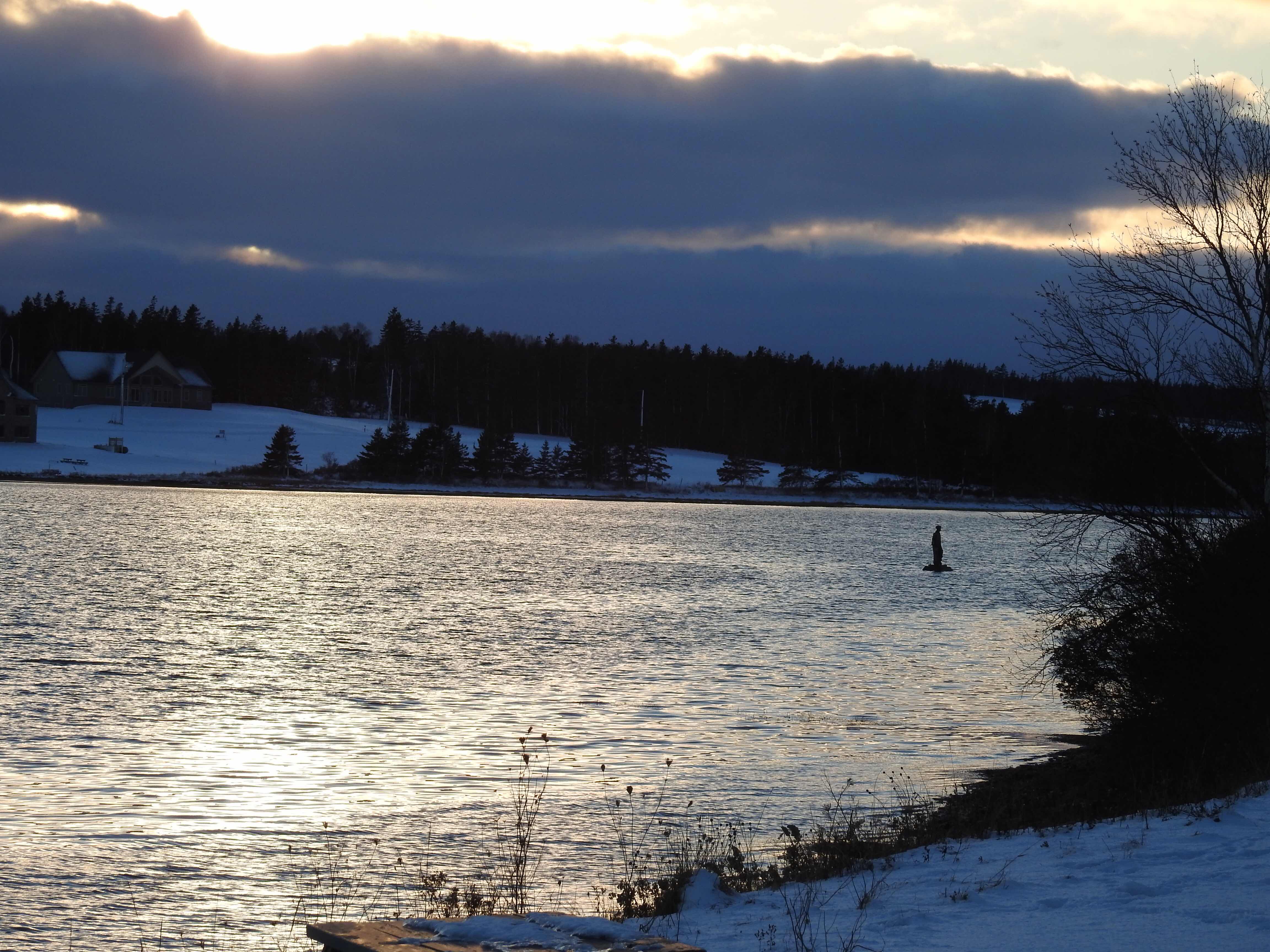 He becomes a shadow now, but is as real to his progeny as he ever was. He is part of them, a gene in their make-up, a link in the family chain. Day or night, wind or rain, water or ice cannot affect him any more. He lives in their hearts.

Hello, love the fisherman statue. He look like he is standing in the water on the second photo. Is the water deep there? Have a happy day!

What a wonderful statue he is. When I first saw the picture, before I read the caption, I thought it was a real person. I love to learn more about your land, Marie. I am surprised at how little I knew about it before. Fishermen are a big part of this area, too. And we have a statue, too. I will have to show it to you one day. :-)

How awesome to have that statue right in the harbour! A fitting tribute.

He feels quite life-like.

Pity hand fishing is still not done. The nets just catch too many regardless of size. Keep well Diane

Beautiful tribute to centuries of fishermen Marie. Your last shot is incredibly poignant ✨

The statue looks pretty impressive in that location. A very nice tribute to the early fishermen of the area.

A cool thing and a nice tribute by you.

it is a beautiful statue, very nice that it stands there!!

oh marie, i am so sorry about the storm!! i love snow, but big snow storms are hard to get through, especially without power!! i hope you have ways to keep warm, and little projects to keep your mind occupied. we put together a puzzle during super storm sandy (8 days without power) and we counted our blessing that we didi not suffer any damage from the storm!! best wishes to you!!

What a lovely post. Thank you. Here it is raining. LOL

LOVED your post. I love history. Your pictures were awesome. I really enjoyed learning the story.

The fishing industry is under dramatic challenges globally for so many reasons. I just ordered a book on this and may remember to post after I have readit.

That is so neat! (And a little spooky if I were walking and didn't know it was a statue! ) Andrea

The fisherman statue is lovely. I feel relieved to think that he has never experienced tsunami there.
Have a good weekend, Marie.

I think this Fisherman Statue is wonderful, and your last photograph just perfect.
Such a nice tribute.