It is usually mid morning by the time my husband and I arrive at the boardwalk. This particular morning was quiet without many people around although the birds, especially the Blue Jays, were in great voice as usual.

Our first stop was the gazebo to see the stream. There were ducks in the distance on the harbour and a photographer was busy nearby. I took some photos and was excited to see Black Scoters, diving ducks, which normally we have to go to North Cape, Prince Edward Island to see. It was unusual to see them in the Summerside Harbour. 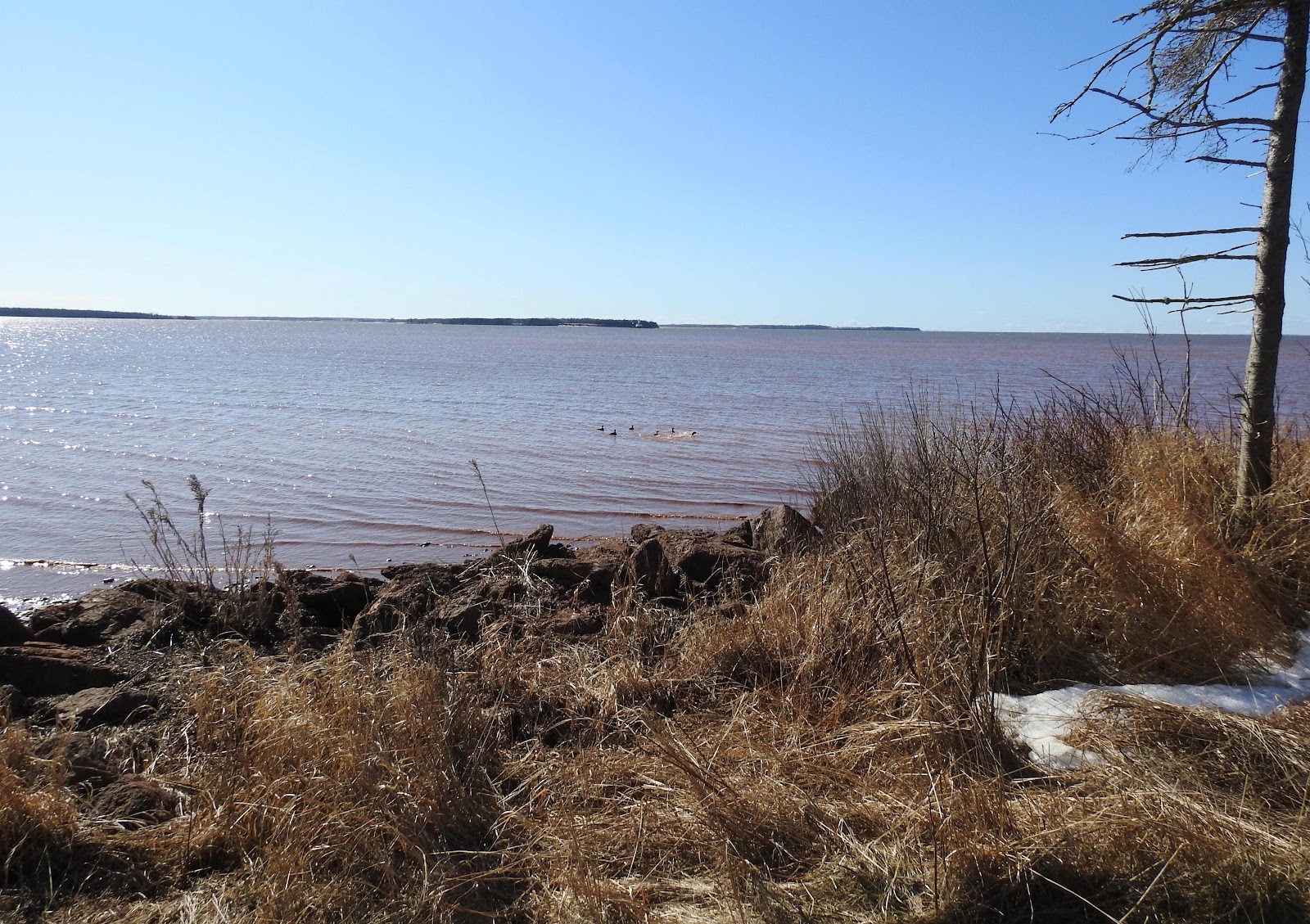 It was a small flock, but we discovered as we continued along the boardwalk, others were near the shore further along the coastline. We could hear their unusual sound as we passed.

The males are black with a yellow orange knob at the base of the top beak. It resembles a piece of candy corn. 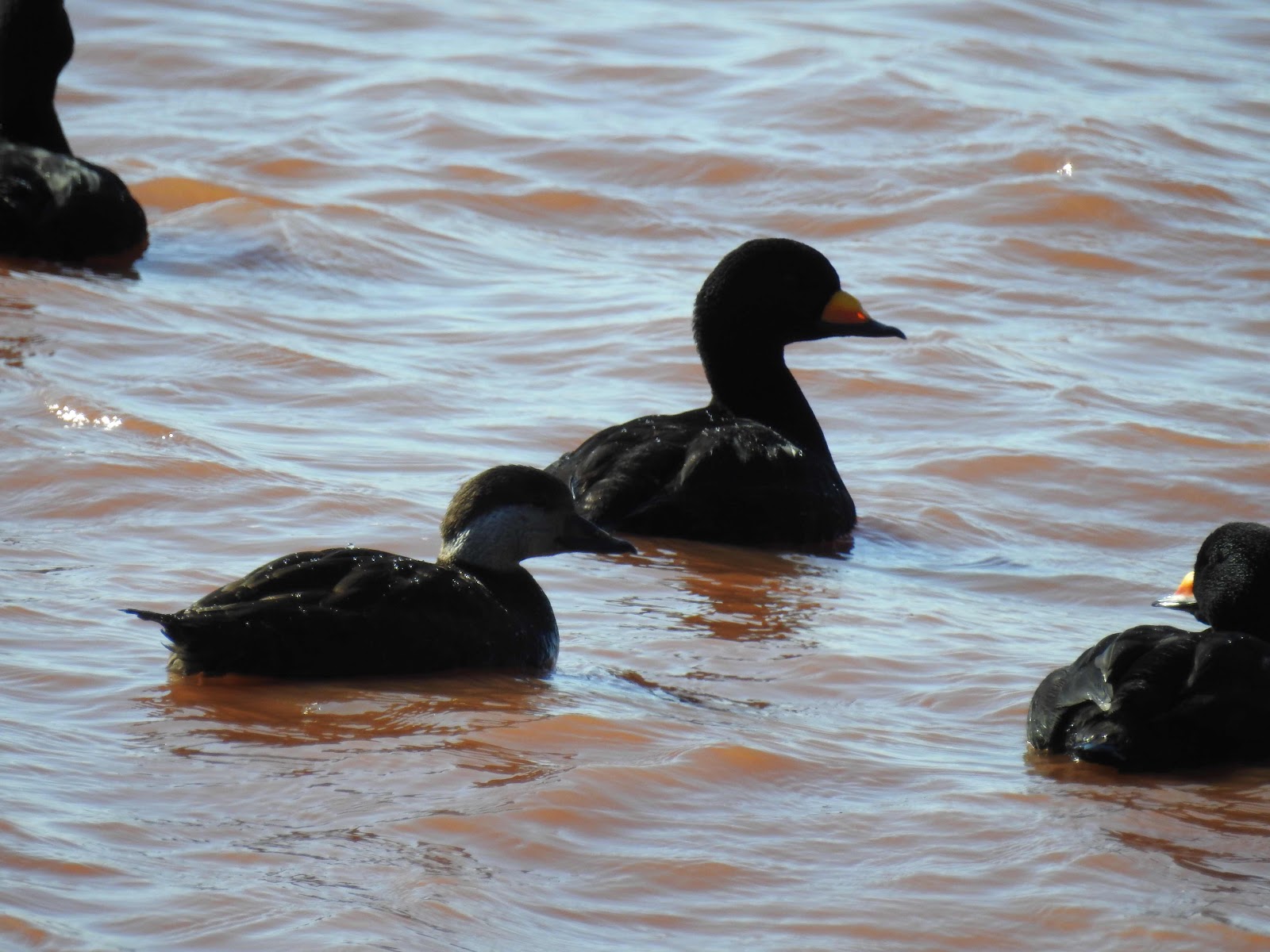 The females are smaller than the males without the candy corn and look more grey. 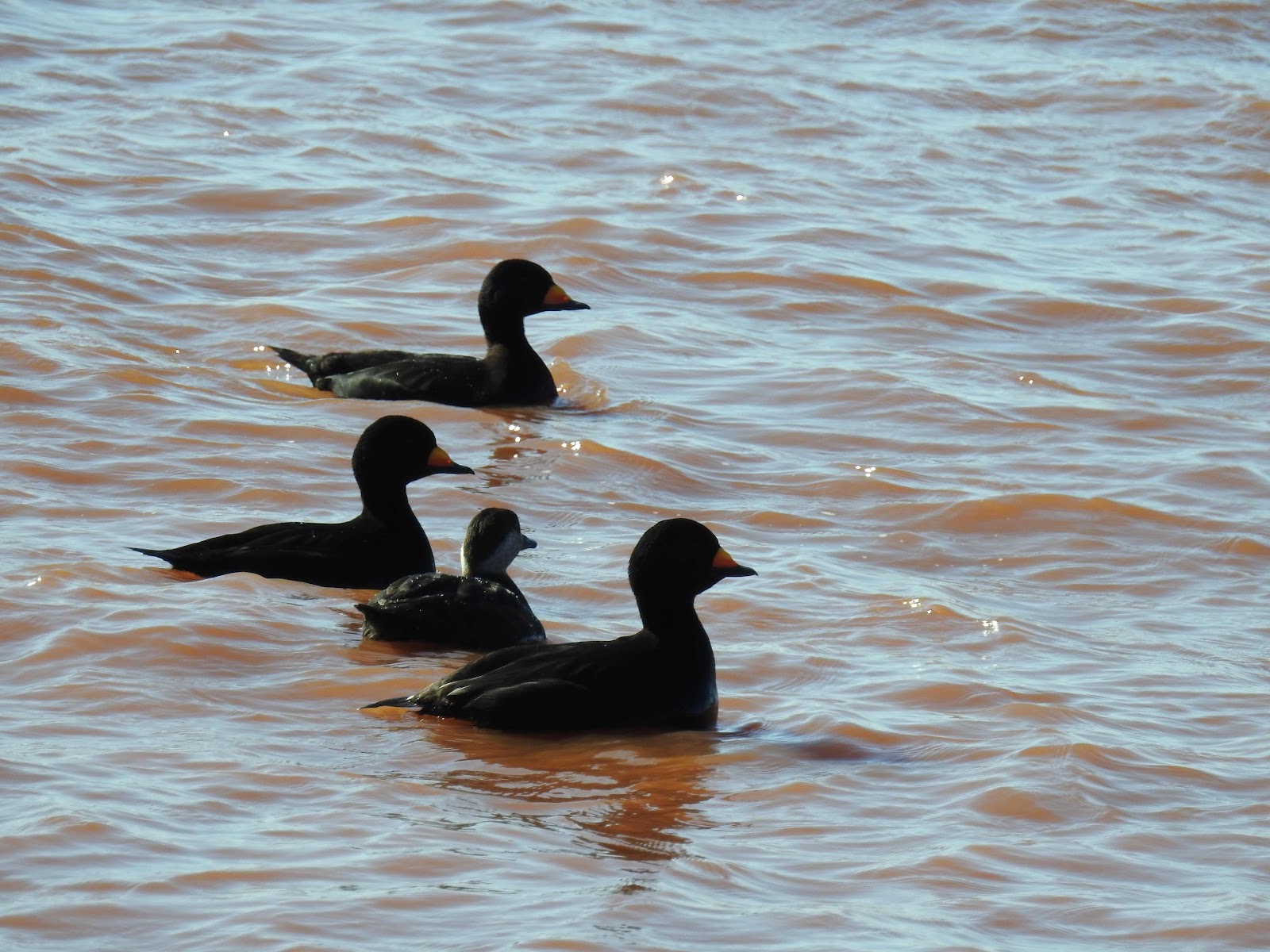 Any time we’ve seen the scoters, there are always more males than females.

The males make an interesting sound like a whistle. 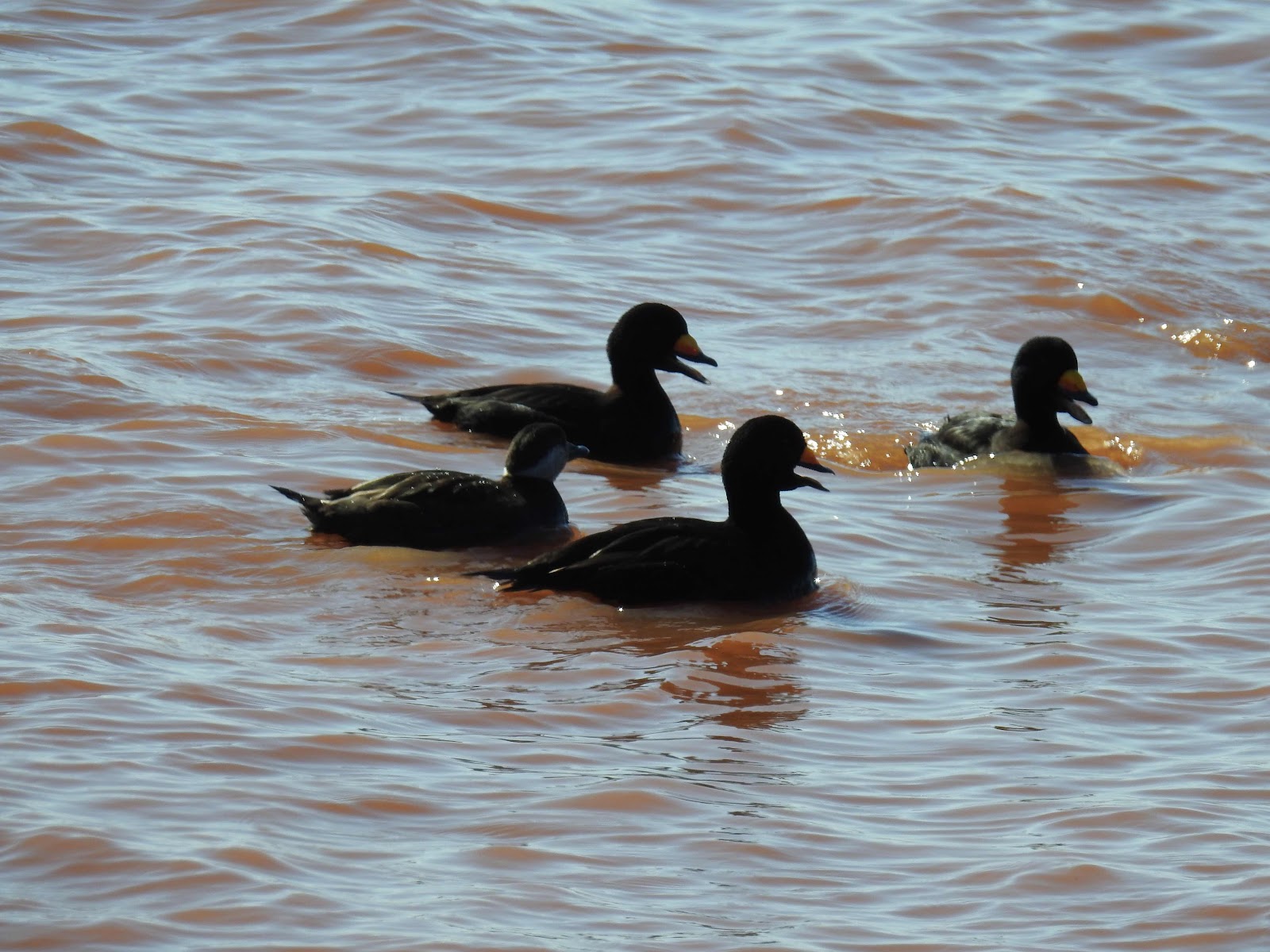 They can be heard a distance away when the chorus starts. I was lucky to video them, capturing the sound but also how one of the males scuttered across the surface of the water, then lifted partially out and down. What is the significance of such action? Is it related to courting or dominance or just fun?

Have a look at this 20 second video.

Whatever the reason for the behaviour, we enjoyed our observation of the handsome whistlers and their lady friend.

The Scoters appear to be staying in the harbour though they haven’t been as close to shore as they were that first day. We still hear them even though they have moved further off-shore. 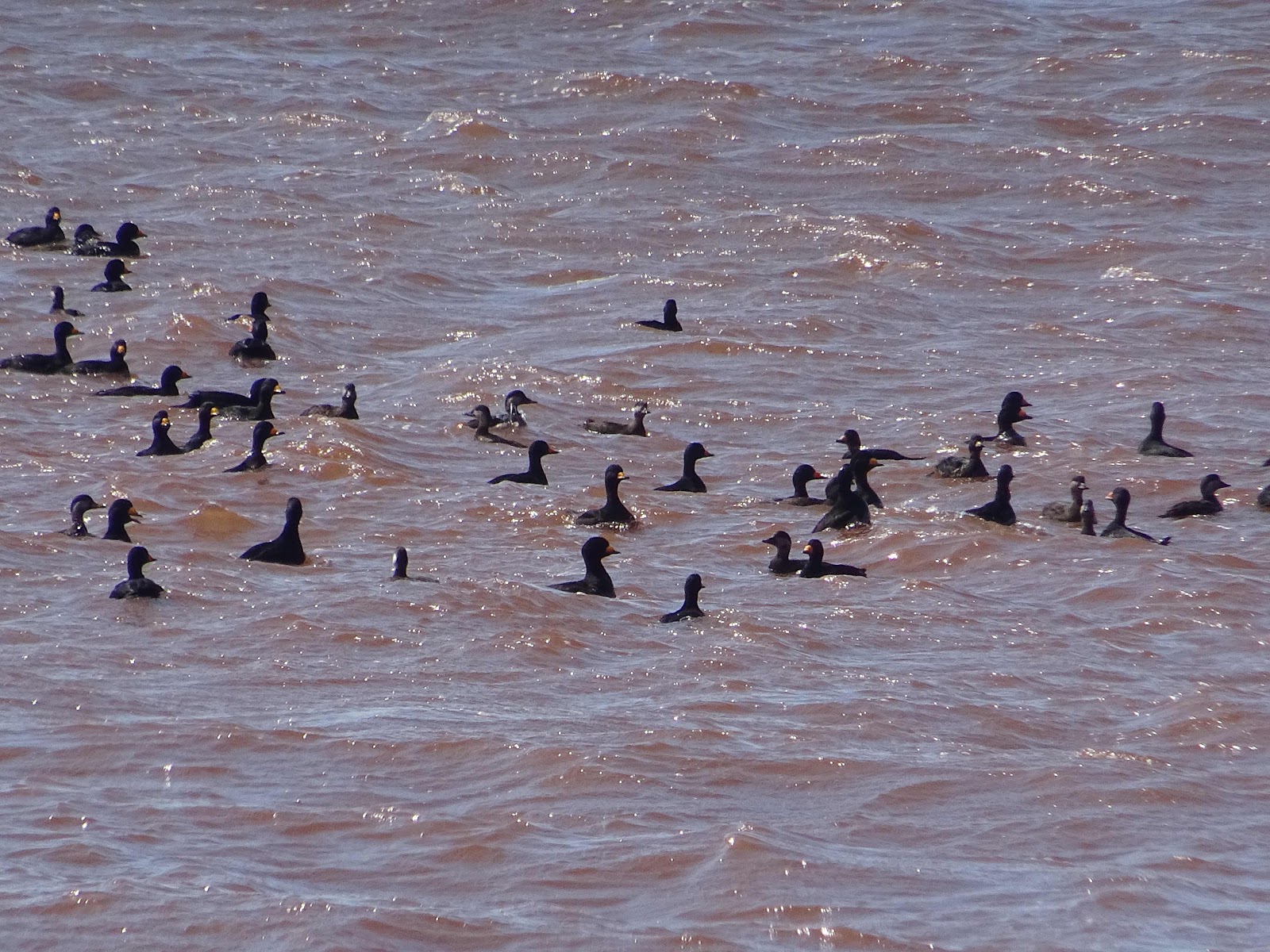 That was a great capture of movement. I'm guessing it's a courtship display -- see, I can run on water, pick me,pick me!

I've seen them at cape May in spring and fall. Are they the ones who vanish under water then reappear in a completely different place?

I love seeing all these ducks, even if I almost never know what they are called. Fun pictures, Marie. I hope they stick around for awhile. :-)

That video is fascinating! I don't think I've ever seen scoters in the wild.

They look almost identical to our Common Scoters but are, apparently (I just looked them up) a different species or at least sub-species. Ours are usually so far out to sea that you need a good scope to spot them. It looks the sort of mad thing that male birds do to attract females (though better than banging your head against a tree like the woodpeckers do).

What a joy to see these birds away from their usual place of living. The video is great :)

What an amazing dance - and a delightful whistle.
Many, many thanks.

That is a large group of ducks. I don't think we have them. At least I haven't seen any. Nice to view a different variety.

Thanks for the video as well as the photos. the mating behaviour of water birds can be quite elaborate and very interesting .

Oh, I so loved your video...I had done gone to listen to them before I even scrolled down. Roger was looking everywhere and then looked at me and said 'Are you messing with me?' LOL

they are so cute, i have never seen them here. perhaps they are native to your area!!!

The video was excellent, and what a great bird to see.

Ducks are dancing so well, and they know the dance music!!
Have a good day.

How wonderful to have such an array of wild life around you. Very interesting birds. I am guessing the move we saw was a Courtship display as another commenter suggested. I know I was impressed! :-)

Three species of scoter are present on Lake Ontario in the winter. Always great to see them.

Enjoyed the video a lot Marie, bird songs/sounds are such a pleasure to hear. I'm going with the courtship theory also 😊 Happy weekend, keep safe ✨

hi marie...there is no real art to or trick to finding sea glass. we tend to find it on beaches that have a lot of debris, stones, shells, drift wood. if i don't see a lot of that, i don't usually find any glass. also, i do better if the sun is out, it often hits the glass and the sparkle catches my eye. we use to find 100 pieces at a time, but they have done a lot of "repair" work/dredging to the beaches, now, we rarely find any!! i guess it will take some time...i was pretty happy to find the few pieces we found. and i was very happy to hear that we are allowed to walk on this beach!!

Wonderful photos and video. I do not think I have heard the Black Scoter making sounds, that is cute. Great post and outing. Take care! Happy Saturday, enjoy your weekend.

They're very unusual, well, for round here anyway. And you have some great photos.

That's a big group of them! I enjoyed the video, thank you for sharing it.

Yes, he was definitely showing off! I hope his lady friend was impressed.

It must be courtship.

Thank you for letting me hear how they sound.

i loved these ducks and special thanks for video ,these moves and voices brightened my (almost) evening :)
i bet your walk is so lovely and amazing always!