The harbour ice was beginning to break up though the ice was still on-shore. 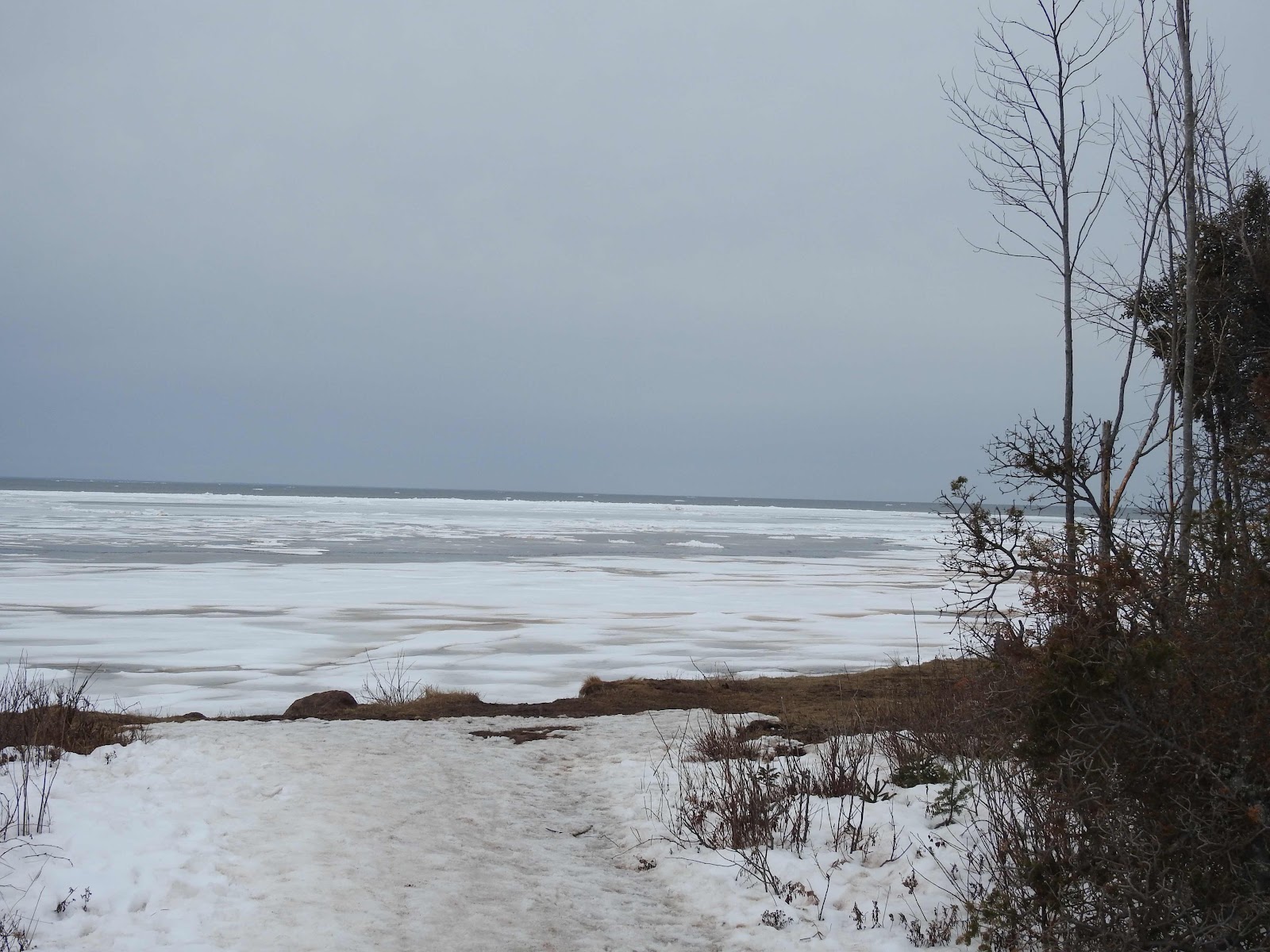 Then the wind changed direction overnight and much of the ice moved off-shore. However, along the shoreline in the outer part of the harbour, huge pans of ice were stranded because of the low tide. 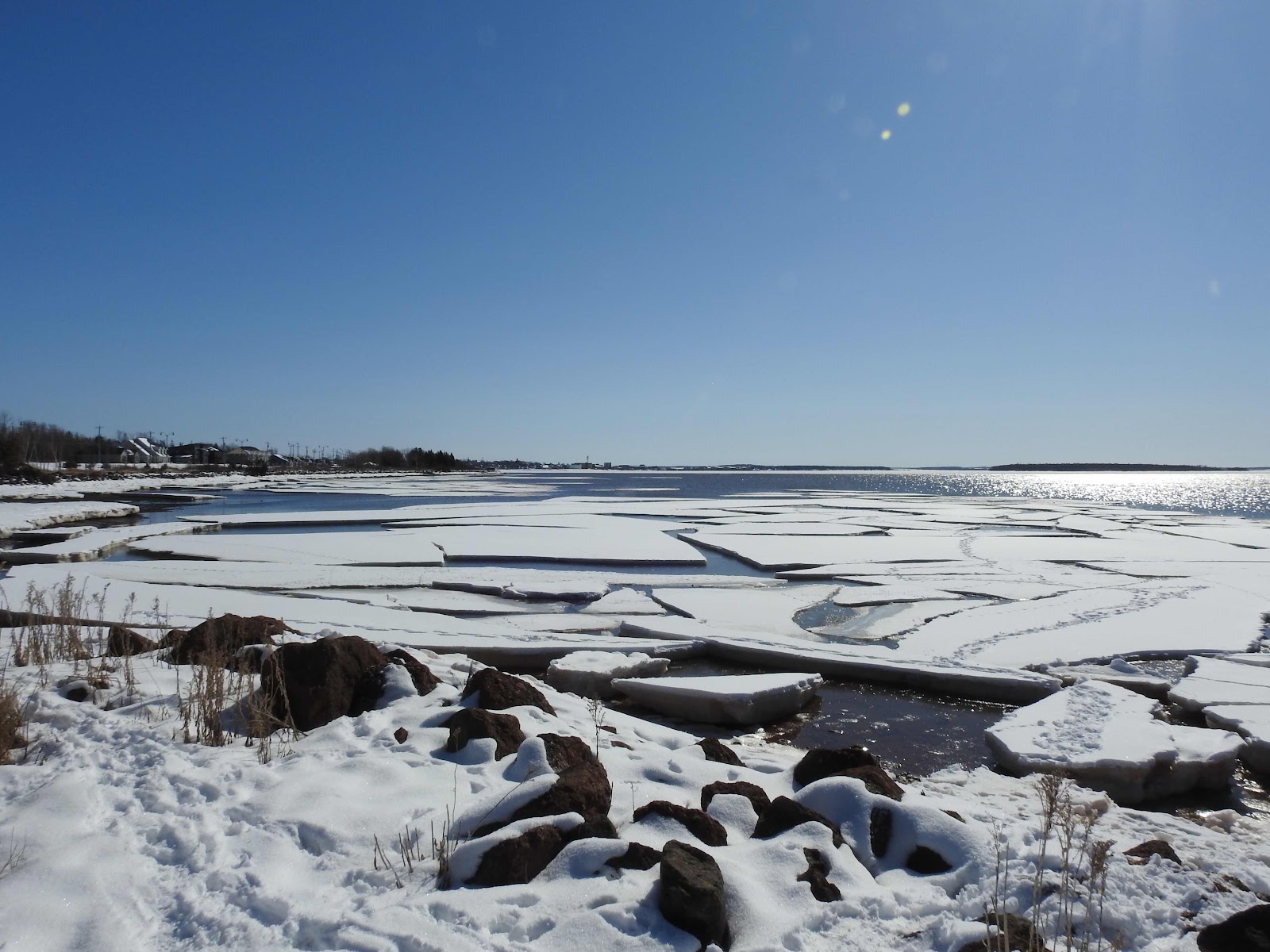 It made me think of my Newfoundland home.

During the spring years ago in the coves and bays, any chance they had, youngsters were copying, jumping from pan to pan of floating ice, following a leader as they went. Imagine the ice as thicker and far less even as it floated around with the tide. A combination of broad jump and balance beam skills were required as each child in turn crossed a cove pan by pan. A false step could be deadly as falling or slipping into the cold Atlantic was a real threat. Over the years some young people lost their lives.

Many a parent threatened their children with serious bodily injury if they were caught copying. Meanwhile youngsters looked for opportunities when their parents were occupied so they could play on the ice.

Here in Summerside, the ice is too thin and isn’t floating so it wouldn’t be much of a challenge though it looks like someone checked it out.

The next day the ice was gone into the Northumberland Strait where 7 degrees Celsius quickly melted it. 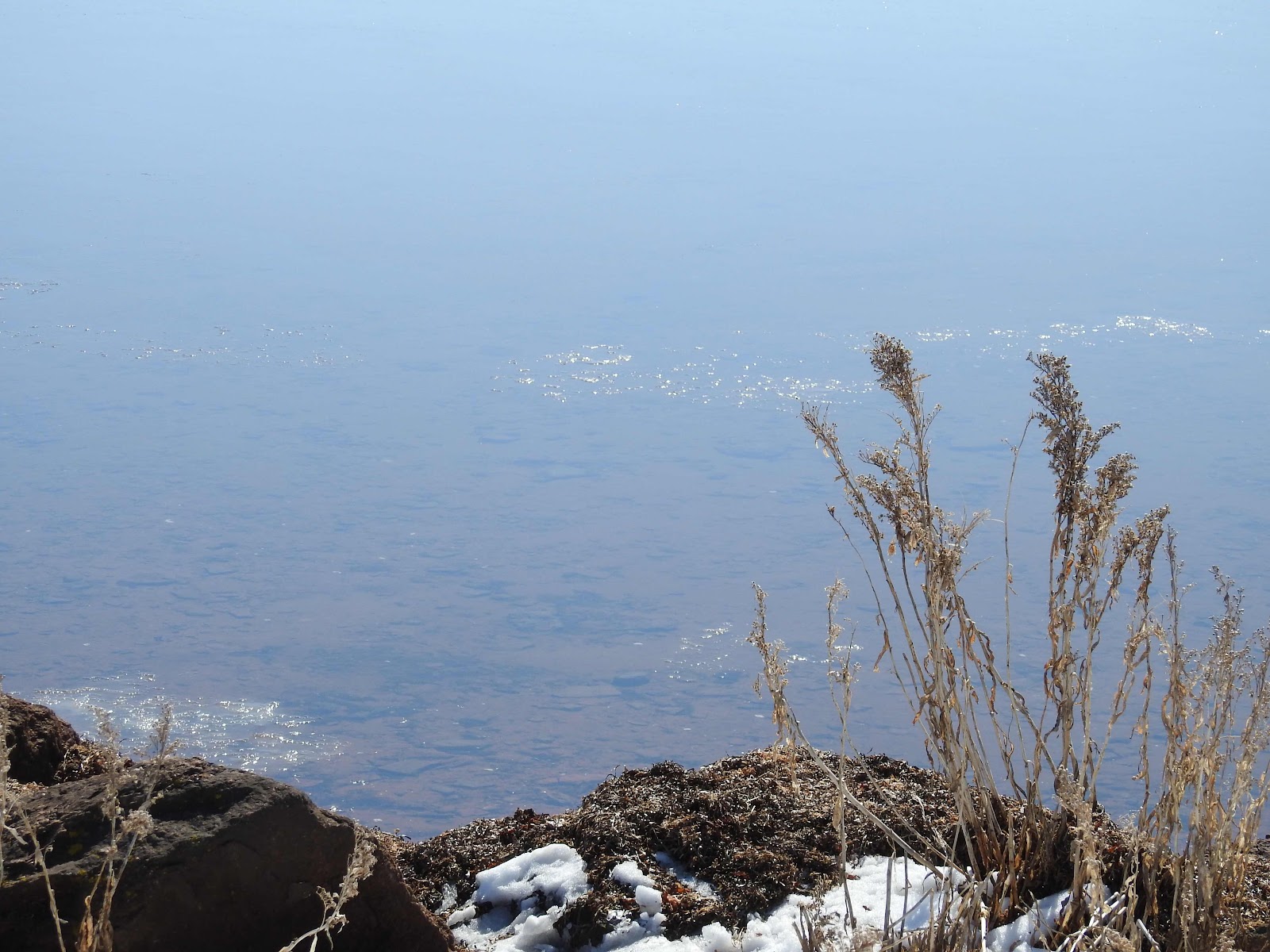 However, I enjoyed the memories of home.

Oh my gosh why is it that teenagers think they are invincible 😱 I can't remember being like that, can you Marie 😉 Amazing to see so much ice there!

Wow that sounds like such a dangerous "game." I just can't imagine. Of course, I am not 12

What a dangerous game!
But that ice is gone. One more step.

Made me nervous just reading about it! But some kids, and grown-ups, love the excitement of danger. I think life's quite exciting enough without looking for more. At least mine has been up to now!

What a horribly dangerous thing for kids to do! But some kids never listen, do they?

Dangerous game? How about rank stupidity?

That sounds like a terrifying game, but I can totally picture my sister doing that if we had lived somewhere cold when we were kids.

I'm glad the ice is finally melting some for you.

i have never heard of copying, it sounds so dangerous!! these pictures are really beautiful, especially the second one, i have never seen anything like that!!

thank you for your friendship during this difficult time, i look forward to you posts and pictures!!!

Copying sounds like such a dangerous game, but I imagine the children thought it really exciting. Sometimes my brothers and I did things that I now shudder at, things like climbing up on rooftops, climbing high into trees, and sharing a rail bridge with a train. I am sure our mother never knew half of what we used to get up to! :) xx

Scary. We rarely have that much ice but the last time we did there were kids out on it. We had a flood here about a month ago and when the flood retention pond emptied out some middle school kids walked out on it and two sunk in up to their waists and had to be pulled out by the fire department. If they were mine I wouldn't know whether to hug them first or kick them all the way home. Terrifying.

What a dangerous and stupid game, not worth your life.

I am pretty sure that my brothers and I would have played that game (if only we ever saw ice like that). It really is amazing just how many teenagers survive to reach adulthood.
Lovely photos.
Stay well, stay safe.

Country kids were adventurous. they did many risky things. How do I know? I was one of those country kids.

I'm sure it was very tempting to see those ice blocks and wanting to play a dangerous game. Typical teen behavior, I think. I really like that last picture. :-)

Great and informative great interesting pictures. Oh my! I shudder just to read about these kids playing on that ice. Yikes!

I would probably have been one of those kids...scares me to think of it. So much I did, I can not even stand to think of now.

I wanted to say that first photo...oh, I love it but it just seems so desolate....

I always pass on your remembrances about Newfoundland to my niece who lived there years ago. I'll have to ask her if she was crazy enough to do the ice "game".

I can make out the tracks back to shore. Dangerous.

That sounds ridiculously dangerous! I would never have been brave enough to try that.

Wow, I would not be so brave jumping on the ice. It does sound dangerous. The photos and scenes are beautiful. You live in a lovely area. Take care and enjoy your weekend!

I've never heard of that copying game, sounds quite like something a child would love to try, although I can certainly imagine parents banning it! Scary stuff to fall into that cold water! Beautiful pictures you shared, and how lovely that the ice had melted by the next day, amazing! Trust you are doing well there :) Many blessings!

Oh, my, Marie. Just thinking about that "copying" game, as you described it, gives me chills. Kids will be kids, of course, so it doesn't surprise me. I learn so much from you because of where you live, BTW. The beauty often takes my breath away.

I don't think I would have done that as a kid. I am terrified of deep water, or even a little deep.

Your post made me remember the three boys at Pouch Cove a few years ago.

broken ice looks amazing and fascinating to me dear Marie

how nice these views stir some beautiful memories :)
blessings!

One year I hope to spend a winter in a place that has weather like this - my wife thinks I'm crazy and she me be right!

Powerful - Amazing Chunks Of Ice - Also, Just Love Those American Black Ducks On The Stream - Enjoy The Week Ahead

I never heard the term, copying. I'm sorry to read some lost their lives.

The ice on the Ottawa went fast.