There was snow in the forecast so we went to the boardwalk in the early morning ahead of the inclement weather. The birds greeted us as soon as we left the car. The American Crows, fewer in number now than earlier this year were in exceptional voice as were the Blue Jays. However, other birds are along the boardwalk now too and they are a welcome sight,

Two Mourning Doves sat in trees near the gazebo. Their cooing was audible above the noisy birds in the distance. 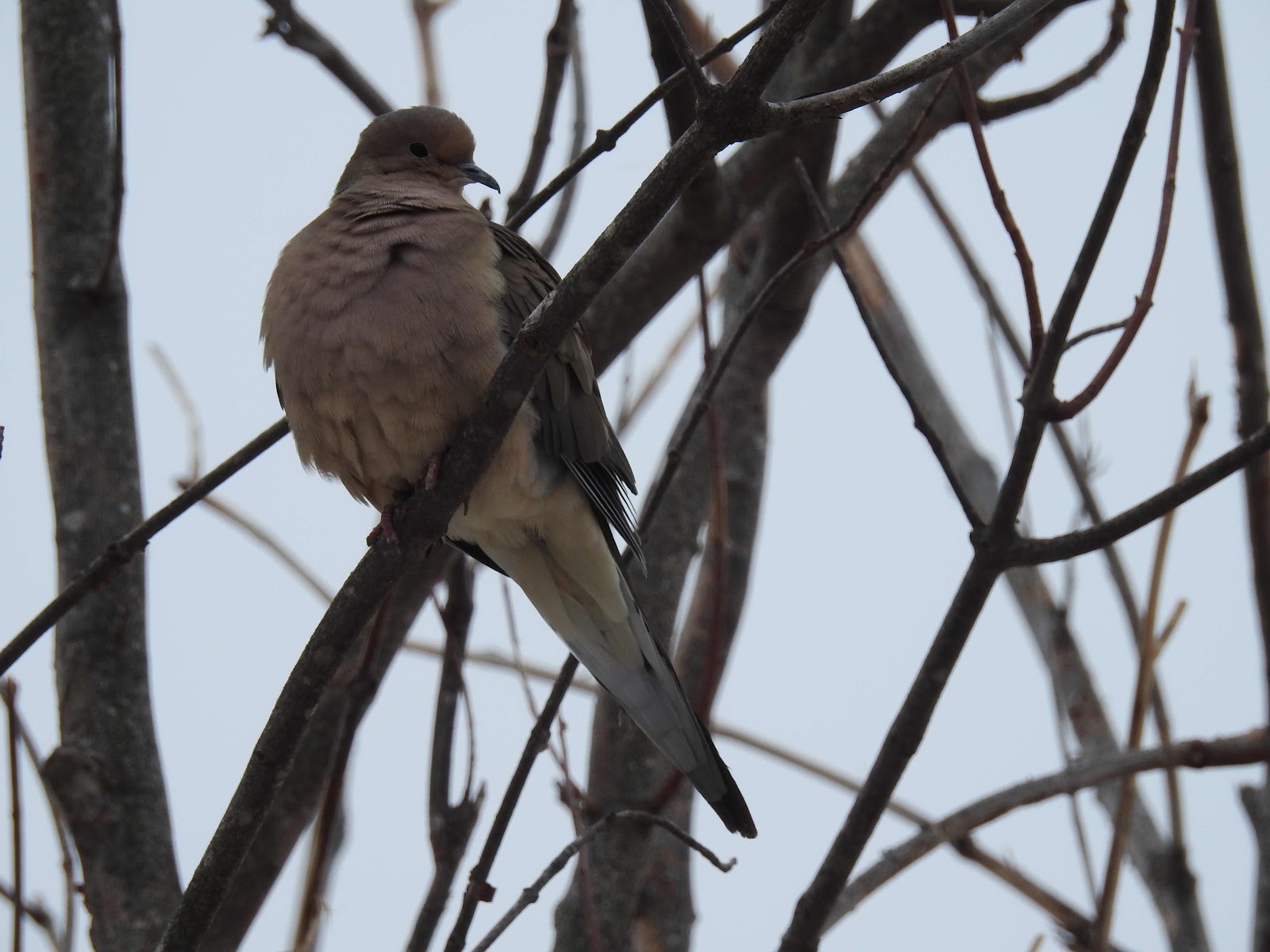 Numerous Black-capped Chickadees are back, hiding in the trees, waiting for walkers to place seeds along the bridge for them. They will feed out of one’s hand as well. 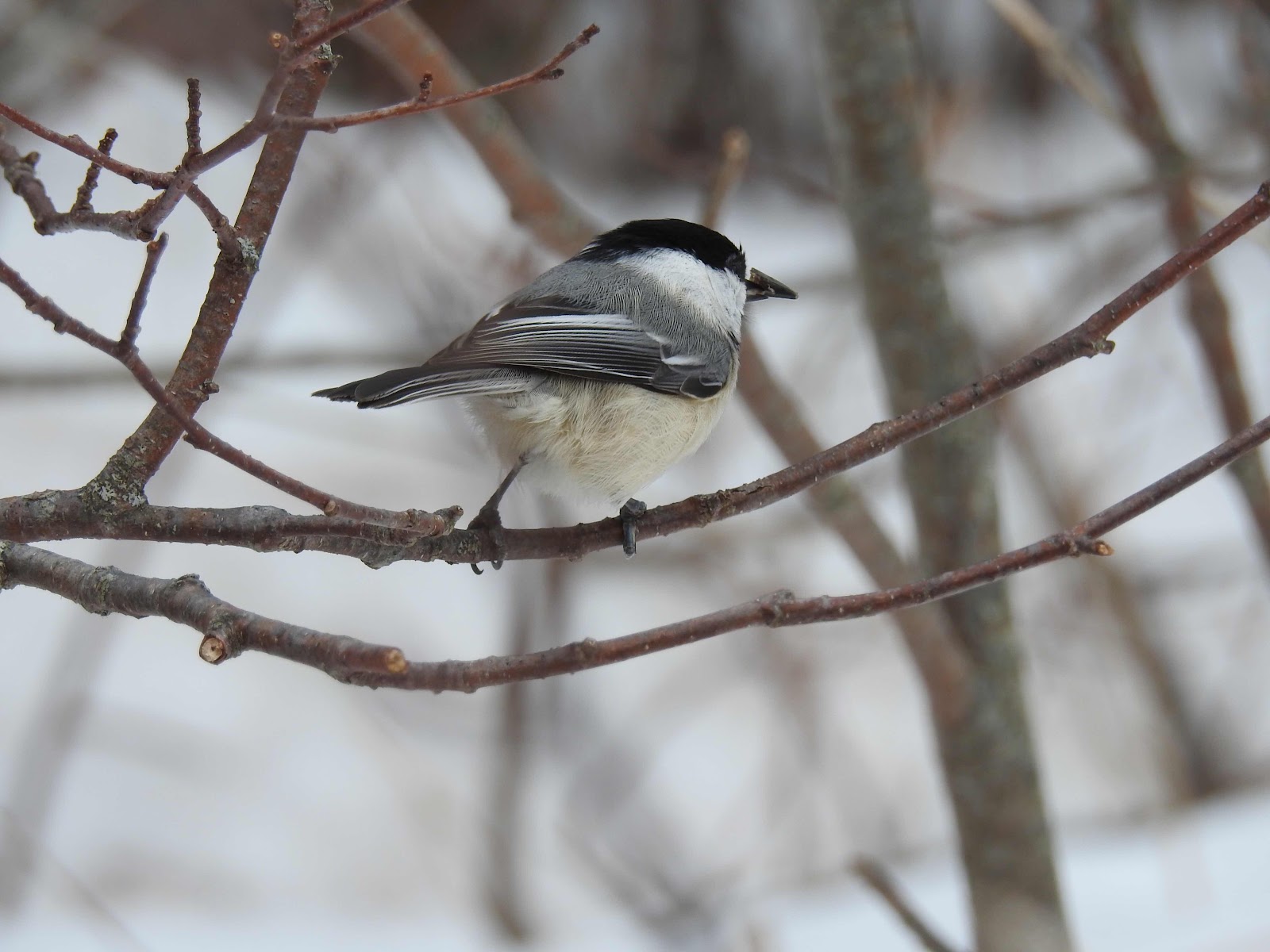 Red-breasted Nuthatches have returned and are ready to feed from one’s hand. However the more aggressive chickadees chase them away. 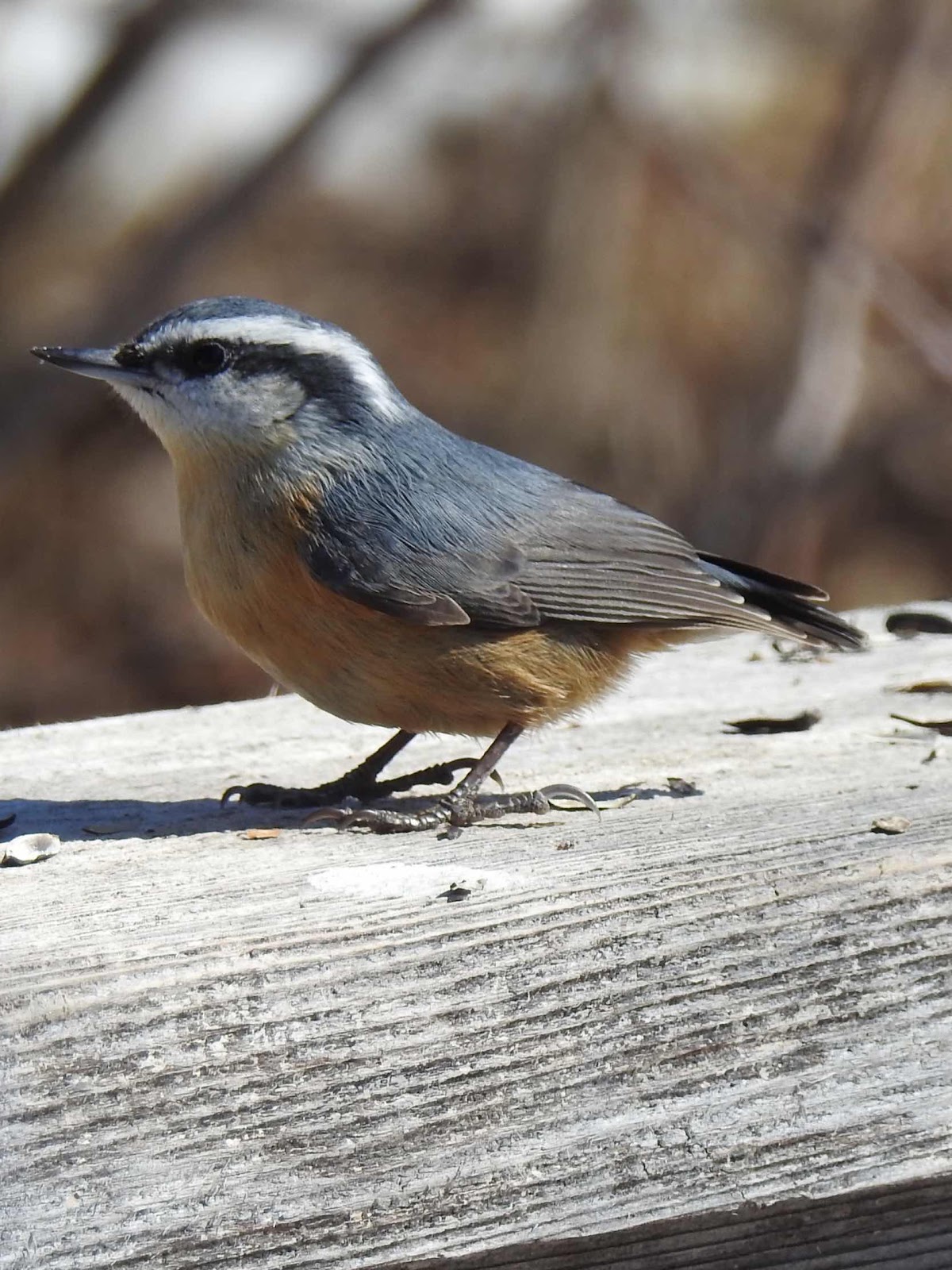 A single European Starling dropped by to see what’s going on. It is unusual to see one of these birds on its own. 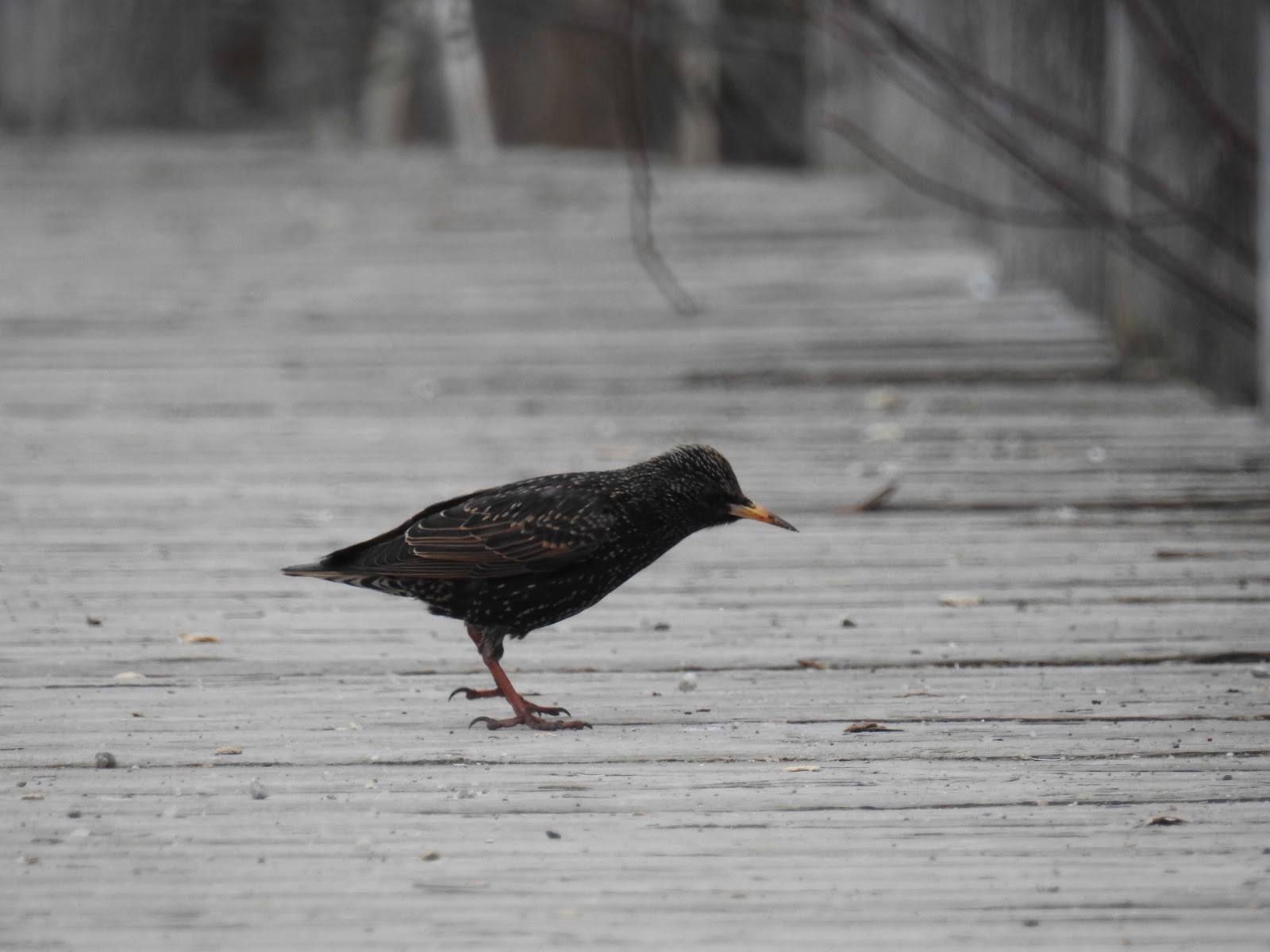 The Song Sparrows have returned. We heard them and recognized their melodies long before we saw them. They are such powerful singers! 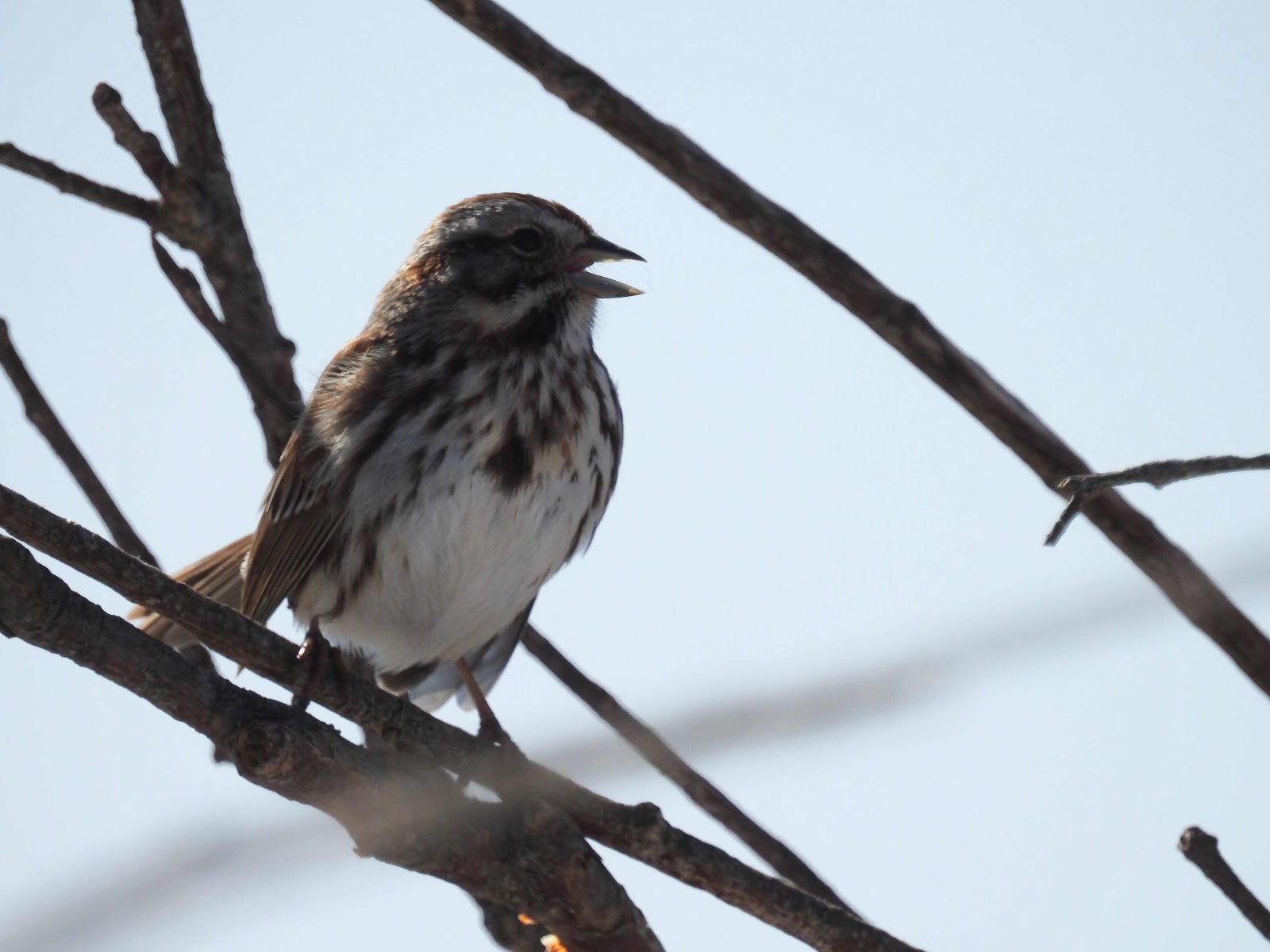 Meanwhile out over the harbour, a gaggle of Canada Geese flew by demanding our attention with their conversation as they looked for a place to land. 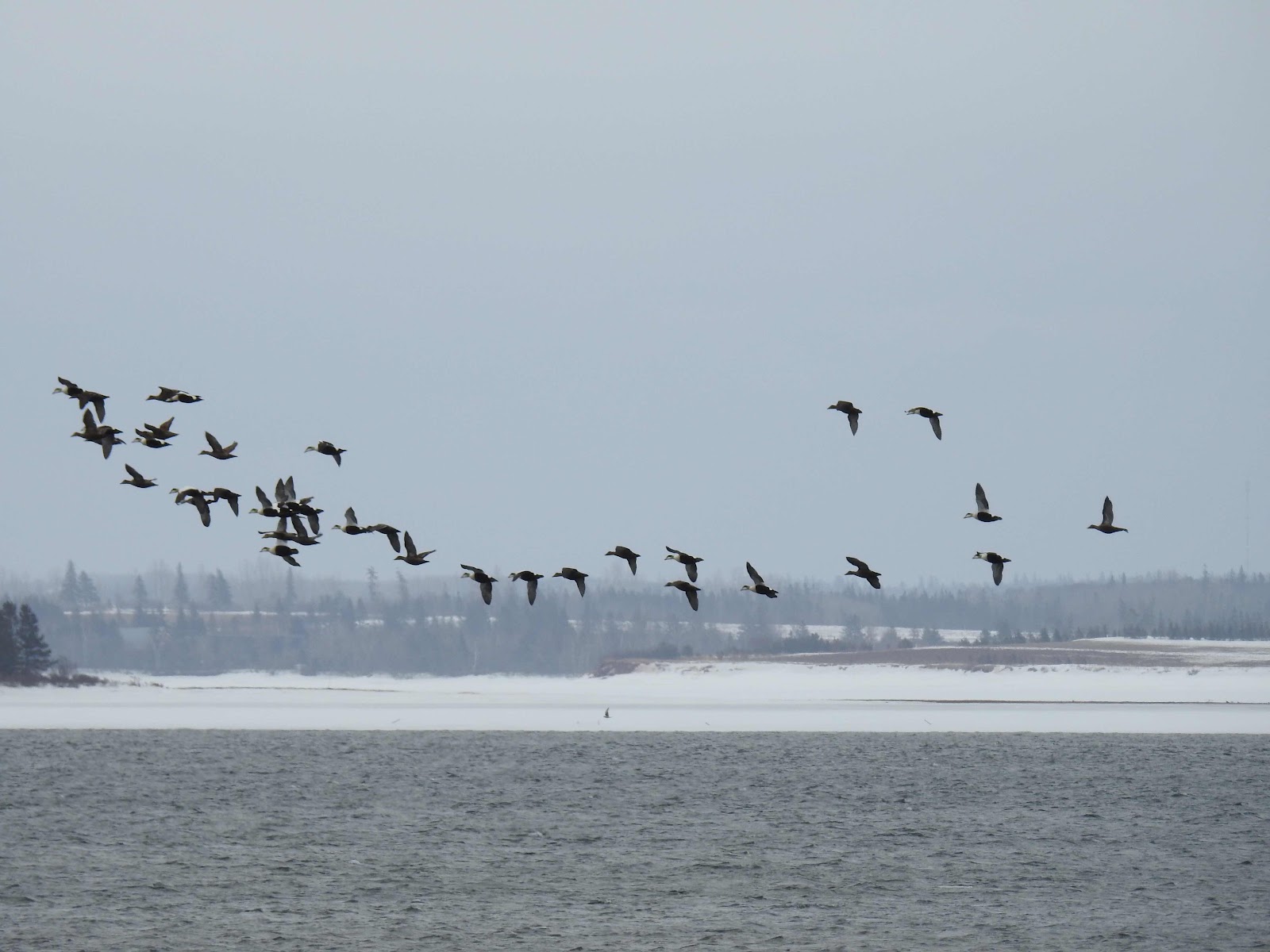 Can anyone identify this bird? I have never seen it before though I imagine it is common  on the island. 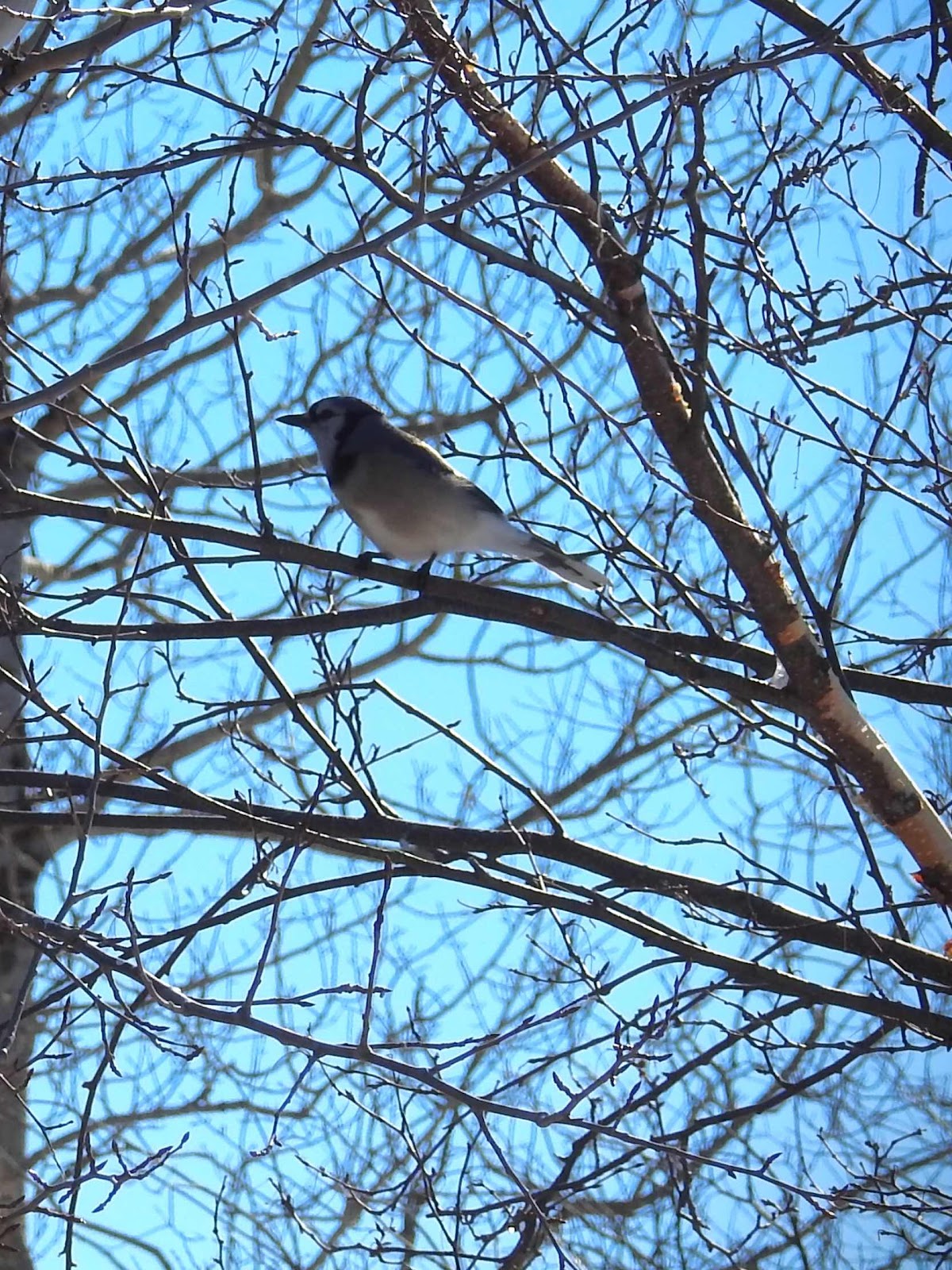 After a winter of crows and jays, these new arrivals along the boardwalk entertain walkers out for exercise and a break from the isolation.

I have always loved chickadees and nuthatches. They are sociable and seem to enjoy humans. Or maybe it's just the food, who knows? No idea about that bird but maybe somebody will enlighten us. :-)

It is great to see all the birds returning for the summer season. Love the sweet Doves, Chickadees and the cute Nuthatch. Awesome capture of the Geese in flight. Is the last photo, a Blue Jay? Take care & stay safe! Wishing you a happy day and a great new week!

I've noticed at the feeder that the white breasted nuthatch bustles away the redbreast. So I'm not surprised other birds do, too.

Could you hear a song from the mystery bird? I'm wondering Phoebe. They say their name!

Beautiful photos. Must be great seeing all these birds return to your area, definitely the end of winter :)

Oh what lovely shots of these sweet little birds Marie, surprisingly the smaller birds can be the noisiest. Our little willy Wagtails and rainbow lorikeets to name but two 😉

Great photos, Marie, the song sparrow is singing you a song as you photograph it.

Some super duper excellent shots here. Very cool. I like seeing the wood too by the birdie feet.

That's incredible that the birds will eat from your hand. They're all so pretty. You got some great photos!

It sounds and looks WONDERFUL. I particular liked the photo of the flock of geese.
Grace is right about small birds and their song too.

It does the heart good.

I believe the bird is blue jay with and odd coloring...leucistic.(spelling incorrect)

Your mystery bird is a Blue Jay. I have them at my feeders all year. They can be noisy, but are so very beautiful . I just read a previous comment. The coloring is right on.Their bellies are more white than blue. Sunlight would enhance his looks.

It's so beautiful to see all these birds. Thank you Marie! Lovely post!

You got some fantastic bird shots...I think the one of the nuthatch is the best I have ever seen.

Is your new bird a tufted titmouse?

Yes, to Ruth. It looks like a blue jay to me, just with his pointy cap clamped down tight. Thanks for all your wonderful posts.

Great to see all these birds. The mystery species is a Blue Jay (Cyanocitta cristata).

what a beautiful variety of birds, your images are wonderful!! it is hard to believe that those birds will eat right from your hand but i know they do!!! a nice capture of the geese!!!

I l0ve the sweet little nuthatch. A lovely blog entry.

I do love your sweet birds. I didn't know that the chick a dees would feed from your hand. that would be so exciting for me.
We have some cats in our neighborhood that think the birds are their own personal buffet.
so a lot of birds just make sporadic visits to our trees.
Sue

My daughter moved into a new apartment at the end of March. She was telling me she met one of her neighbors who was listening to an audiobook (which we both love) while bird watching (which I love) at their complex. Apparently, the neighbor knew quite a bit about the birds and was telling my daughter about the birds that visited. It sounds like a very interesting neighbor. I'm excited for her.

So nice to see the photos of the birds. Brave little souls out there flying about in the cold wind.

I so enjoy birds! This past week goldfinches have appeared back at our feeder, other spring birds have arrived as well. There songs fill the air as they hang out in the trees here around our house. Such happy sounds!

Love how you were able to capture a picture of the one bird with it's beak open.

Oh these are DELIGHTFUL !!!!!!!!!!!!!!!!!!!
thank you sooo much for sharing these amazing images from your walk
world seems such a beautiful place when eyes can see such wonders
you are wonderful photographer Marie!