Last week we rode 88 kilometres on our bikes with our longest ride 25 kilometres. We are enjoying cycling, the countryside, the weather, the picnics and the people we meet along the way. It became colder over the week but we’ve had the right clothing and a cup of hot tea at the end of the ride always hits the spot.

Our final ride last week took us from Ellerslie to Portage and back. In Ellerslie at the beginning of the trip, we met a woman waiting for her husband who was riding west from Richmond. They are in their eighties. They cycled together previously but she has problems with balance now so she doesn’t ride any more. Instead she drops her husband at his starting location and waits for him at the next stop. He goes as far as he can on a particular day. She enjoys driving to the locations and talking to people she meets. Cycling is still a sport they continue to enjoy together.

At the end of the ride we met another couple riding the trail, completing their Tip to Tip for this year. It is a bike ride on the Confederation Trail, from one tip of the island to the other, a total of 449 kilometres. This couple completed the venture last year and was busy doing one of the last sections for this year. They take turns driving to the next meeting point or riding the trail. They were in their seventies.

Meeting these cyclers encouraged my husband and I to continue the sport. As it stands now, we both ride a section of trail and back to the car. We would like to do the Tip to Tip plus return next year. We’ll see what the next six months bring.

I hope you have a better day than this poor woman we saw recently in Emerald. 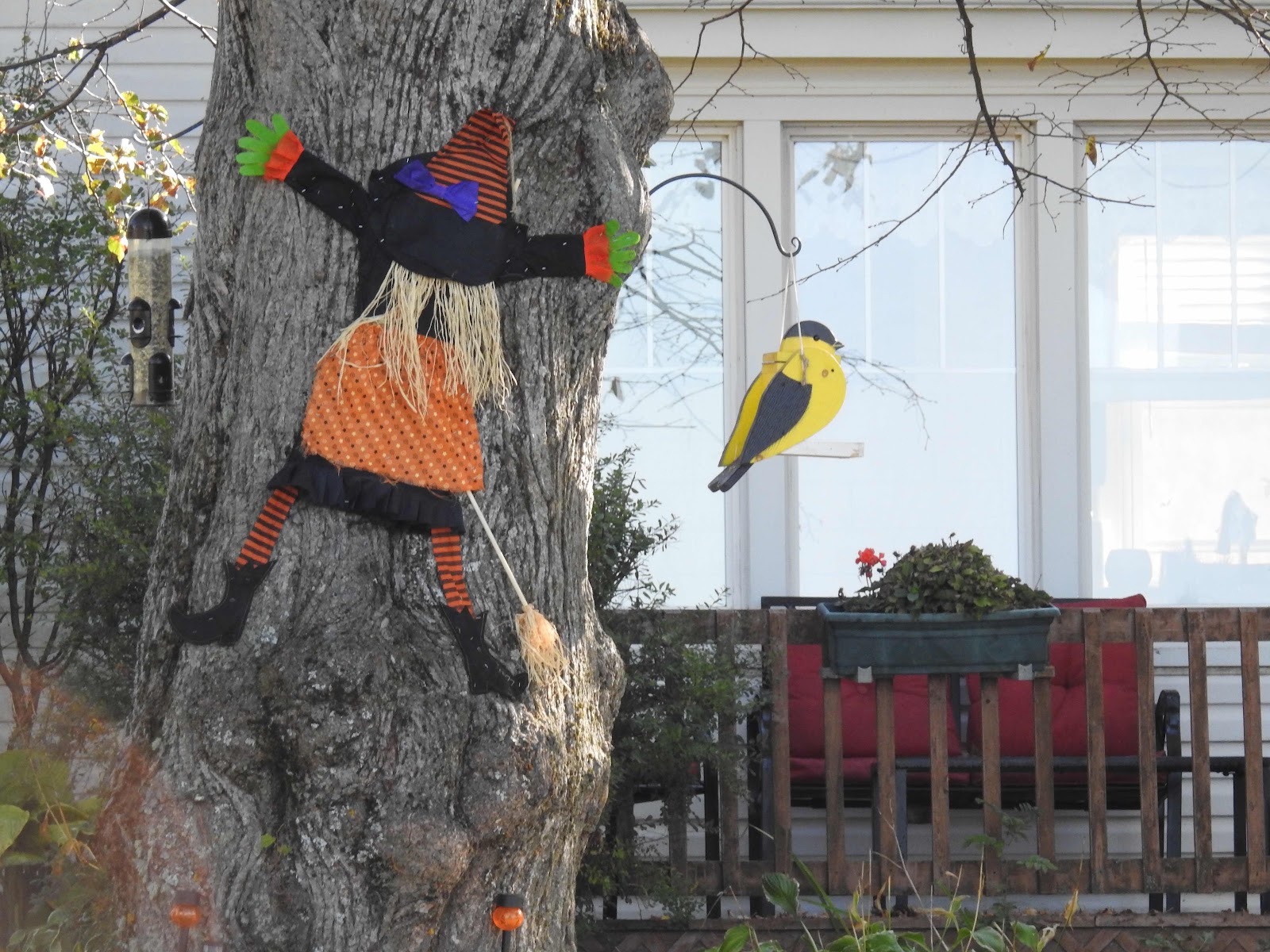 It is great to hear about all the cycling seniors. It is important to stay active. Love the Halloween decoration, the Witch made a wrong turn on her broom. Take care, enjoy your day!

I am enjoying reading about your enjoyment and remembering when I used to post about cycling.

Marie,
Cycling is not only great exercise, you get to see so much of nature. I love seeing all your beautiful photos along your trails.. thanks for sharing.

On Instagram I follow a senior who cycles all over the country and camps along the way. I love reading about his adventures. I'll have to check to see if he also has a blog. If he does I'll come back to give you the link. Love the smashed witch, that's so cute!

That sounds like it would be a fun adventure. I hope you do it and write about it. Yes, that poor witch is toast. :-)

Happy Halloween to you too!

ooooh this is so encouraging, i can't imagine i would be able to do this in to my 80's!! i am so happy you have been enjoying your bikes and i guess my post was quite over the top compared to this poor witch here!!!

And please watch for the Full Harvest Moon on Halloween night!

HOORAY for super cycling seniors. I hope you can ride the tip to tip next year.
Smiling at your last image too. Thank you.

Cute Halloween décor, that little witch lady should take up bicycling too, although I suppose she might run into a tree anyway. :-)

It is encouraging to hear about seniors remaining active in one way or the other. I do think it may be easier to do some of these things if your spouse is still alive and with you. Maybe I'm using the aloneness as an excuse.

I really miss cycling. Cycling P.E.I. would be awesome. Keep cycling while you can.

I know several Cycling Seniors who love to get out and about on the local trails. It is so many years since I rode a cycle, that I doubt if I could keep my balance now!

It sounds like you are meeting such nice people while doing something that is fun and is good for you.

My 19 year old grandson is such an avid biker he has covered most of the trails east of the Mississippi, and is starting on the west now. He jut finished the Great Continental Divide. He's also the child who rode the Ho Chi Min last Thanksgiving.

Cycling Seniors and why not with these wonderful trails you have to ride.

Kudos to you for your ambitious bike riding. Enjoy it while you may. Perhaps soon you will be putting the bikes in the garage and bringing out the cross country skis!

Cycling, especially with the power assist bikes, is a great way to get exercise outdoors and enjoy the scenery.

hahahahah
Hope you had a pleasant Halloween.

Cycling is a great sport. I'm sure you feel the difference. You are stronger, you are getting your Vitamin D, breathing fresh air...
: )

If I had someone to ride wjth, I would dust off the bike.... it's got 2 flat tires and is in the basement at the moment. But I'm just not confident enough by myself.

hahah good shoot!Ihope you had a happy and good Halloween :)))

She does look a wee bit compromised 😁 Excellent to hear of your cycling expeditions Marie, current and future. I think cycling and walking are the very best ways to keep fit.. no need for gyms at all 💜

HaHa..I hope I have a better day too...
Good for you and your Hubby biking, enjoying the weather, the scenery and each other..that's the very BEST.
Your island is so beautiful..wish we could visit.
Sue

aww...88 km?.... my opinion that 88 km is a great achievement for seniors.
interesting story of meeting people and enjoying wildlife.

I used to love my cycling but I have really lost interest nowadays and the drivers around here do not have as much respect for bikes as they should!

The longest ride I have ever done was from Landsend in the bottom of the UK in the West to John O Groats in the top of Scotland in the East. 1610 km, I rode with a friend who only has one leg to raise money for St Johns Ambulance.

Have a good week and keep safe, Diane

haha
last photo and your wish made me laugh
i hope for better with prays indeed ,for me this works by the grace of Lord often :)

wow i am so impressed with your 25 km ride ,this is long indeed
people you met in the way are amazingly determined like both of you ,i found these stories inspirational and my wish for cycling rises higher each time i read your post :)
best of luck for each ride in days ahead my friend !