Normally this day is filled with gatherings of solemn ceremony, the day we remember our military dead who died serving our country. The pandemic has changed the traditional ceremonies however, with many moving on-line, with virtual spectators and reduced personnel around local cenotaphs.

Several small communities in central Prince Edward Island, supported by a local service group, decided to do something different this year. Their efforts have drawn people to see four hundred small white crosses placed in front of the cenotaph in North Rustico at the Veterans Memorial Park. Each cross has a poppy and the name of a local resident who served in the Canadian military, covering the period from 1899-1953, including the Boer War, World Wars 1 and 2 and the Korean War. 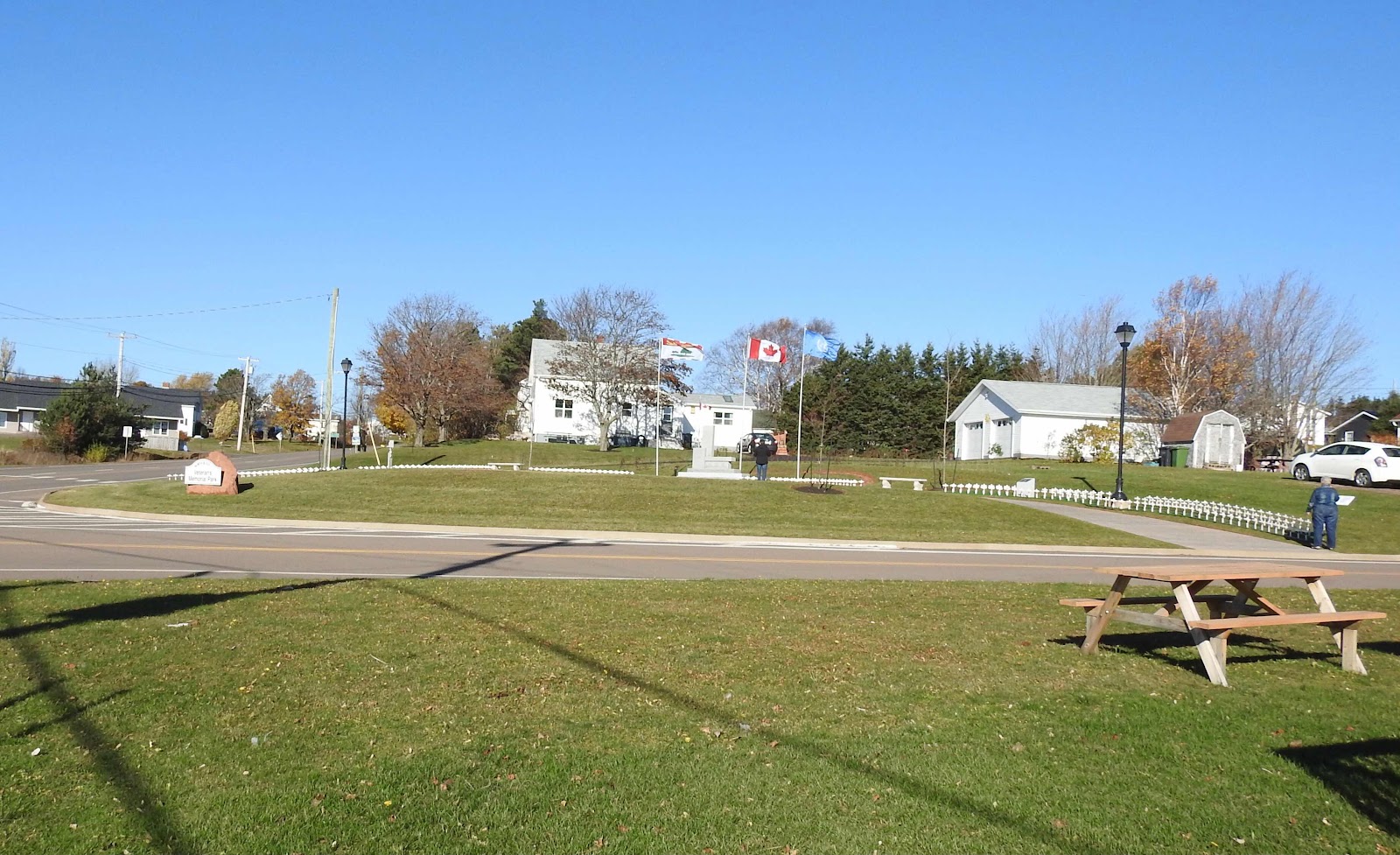 We visited yesterday and I found it to be an emotional experience. It is amazing to see the number of crosses, each representing someone from these small communities who served their country, some of whom gave the ultimate sacrifice.

The same can be said of communities all across this country, so many people were willing to sacrifice everything for their families, friends and fellow Canadians. People from the villages, towns, cities, bays, harbours, coves, mountains, prairies and from Arctic to Pacific to Atlantic answered the call.

Seeing the crosses and the visitors in this place, it is easy to imagine how the enlistment and service of a family member affected the family left behind on the farms and fishing villages of this island. One could imagine the impact in the home communities when so many of the young people were killed in battle. The trauma suffered by those who survived and carried their visible and invisible wounds with them for the rest of their lives were almost reality. It is a place of reflection and appreciation.

A special thank you to all who worked on this wonderful tribute!

It was an emotional experience just reading this and seeing the photos. I'm glad you were able to see it in person.

Great idea. Let's hope that people never have to go through wartimes like that ever again.

Thank you for this moving post, Marie. You are so right: lest we forget, we must carry the memory of those who died for liberty.

this is beautiful marie!! i forgot it was veterans day when i prepared my post a few days ago. shame on me and thank you for reminding me!!

Communities and people are getting very creative this year, since in-person ceremonies are not feasible. This display is wonderful and moving.

What a lovely tribute and memorial for Remembrance Day.

Hello Marie, What a wonderful post! After reading I stopped and just quietly thought about all your words and the photos. The old saying, "A photo is worth a thousand words", does not begin to do justice to the impact your photos provide. I believe I'm going to be thinking about this post for a long while. Thank you and blessings to you for sharing. John

It was nice you took the time to visit and remember those brave people
Wonderful post Marie!

What a wonderful tribute to the fallen soldiers.

Thank you. And huge thanks to those who found a way to remember and honour those brave souls and their families.

I grew up in a very small community, and even they had their Roll of Honour of men who had died in combat. The impact on their families was immeasurable. It is good for us to remember.

All those crosses and poppies is a marvellous tribute the the men and women of PEI who have served in the military. What a great idea. Congratulations to everyone who worked on this project. Very emotional.
I just watched the National Remembrance Service from Ottawa.... a different event this year but very meaningful.
We will remember them.

Lest we forget.
Such an emotive remembrance.

As I was reading this and seeing the pictures, I began to think of how we complain about restrictions during this Covid time. we really have nothing to complain about and so much to be thankful for.

Beautiful and fitting for the occasion.

We will remember them. I watched some of the service at the cenotaph this morning - people were encouraged not to come, but watch online. The 6 WWII bombers flew over our house just before 11:00. Oh, that wars would cease.

That is a truly touching display. Thanks for sharing it with us.

We who remember must help all to never forget.

My son was in the reserve armed forces during the first Gulf war. The day that war started I was terrified that he would be called. His unit was not needed . However I can easily imagine how all these families felt when relatives were in the action.

What a lovely display! Yes. We must never forget.

What a wonderful way to share the memory of each one who so bravely put their lives on the line, many to the death for our freedoms. Thank you for sharing the lovely pictures!

love found it's way to express it's strength indeed

no matter what the country is rich or poor ,advanced or developing we find people who have great love for place they born in and live within ,this earth is our home as whole ,i hope someday we will love it beyond boundaries and such selfless love will bring more peace and prosperity to our home !
more blessings to you and family!

A really touching entry Marie. It never fails to amaze me that so many of our heroes come from small villages. It makes me wonder if we will ever be free of wars and the horrendous way they affect us all.

PS: my niece's name is Wendy (not Helen) and I'm sure she will be enjoying your blog as much as I do.

And yesterday was our day of noting all those who are and have served, to protect our Country...

That must have been a lot of work, but it is lovely and tugs at the heartstrings. My parents came from a small town where many served and too many died. They were generally poor and from mining families who ended up on the front lines and not behind a desk. Many were recent immigrants.

That is a wonderful way to remember our military men...

Yes, our military men give the ultimate sacrifice and should be honored and renumbered with esteem and respect. Thanks for the post of appreciation

Yes, they should never be forgotten.

remembrance day was quiet here due to lockdown but 20 of us attended the service at the local war memorial. So glad we went. Diane