The audience was moving, riding through a theatre with a tree lined stage which was full of performers, many unseen. 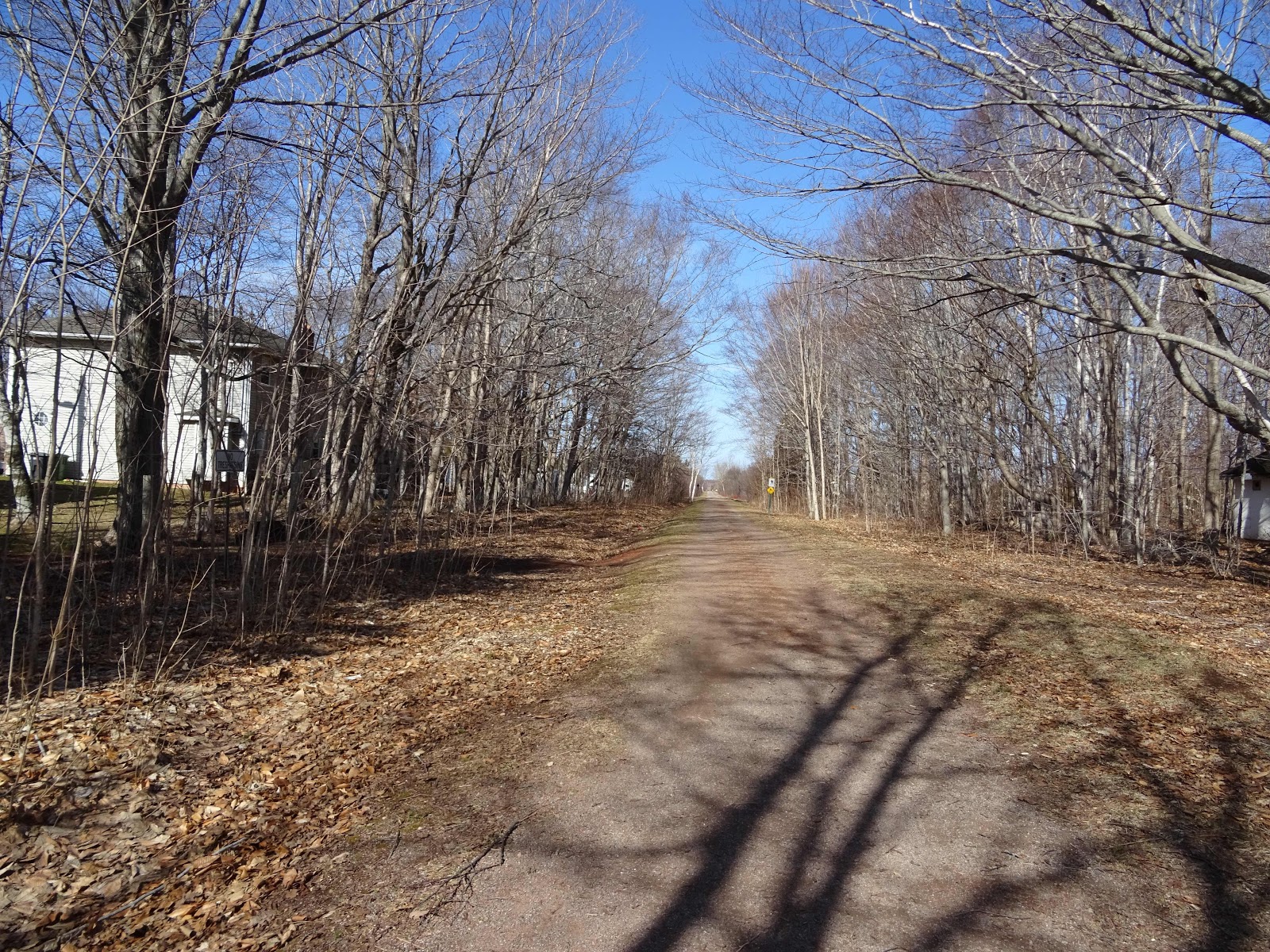 Their voices were varied, some familiar, many not. My husband and I were part of this audience, in front row seats on a calm spring morning as we rode our bikes on the Confederation Trail from Summerside, Prince Edward Island.

The performers were feathered, in a chorus singing their hearts out as we rode by. 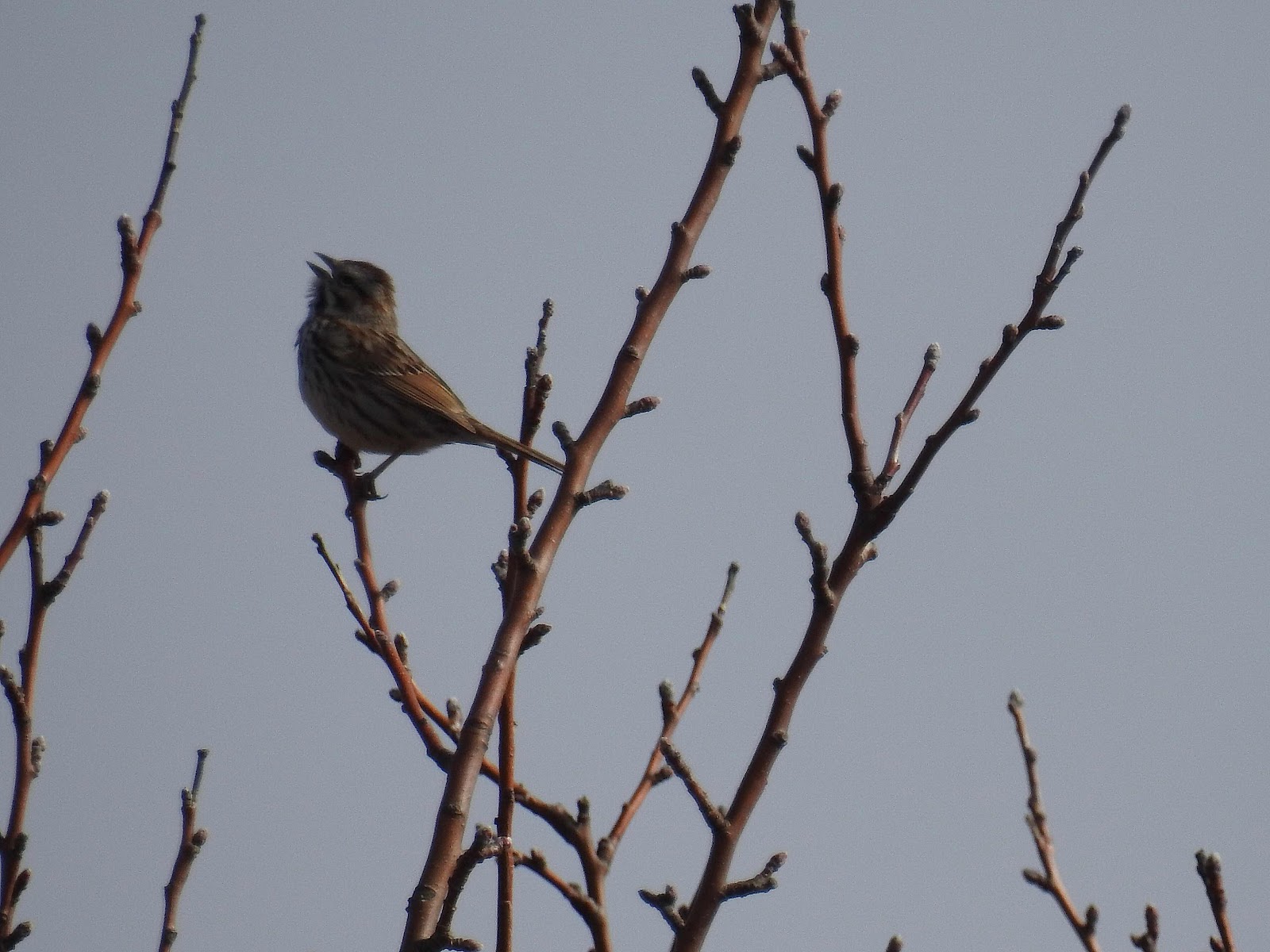 The voices of the Song Sparrows were recognizable as were the Blue Jays. Robins hopped along the sides of the trail on occasion but didn’t stop long enough for photos. Occasionally we could hear them in the chorus. If only we could have identified all the songsters.

A hawk cast a shadow on the trail while Black Ducks took to flight as we rode by, quacking as they went.

Riding along, we could hear the choir as we rode into and out of the songsters’ positions. Thousands of performers put on their best show. 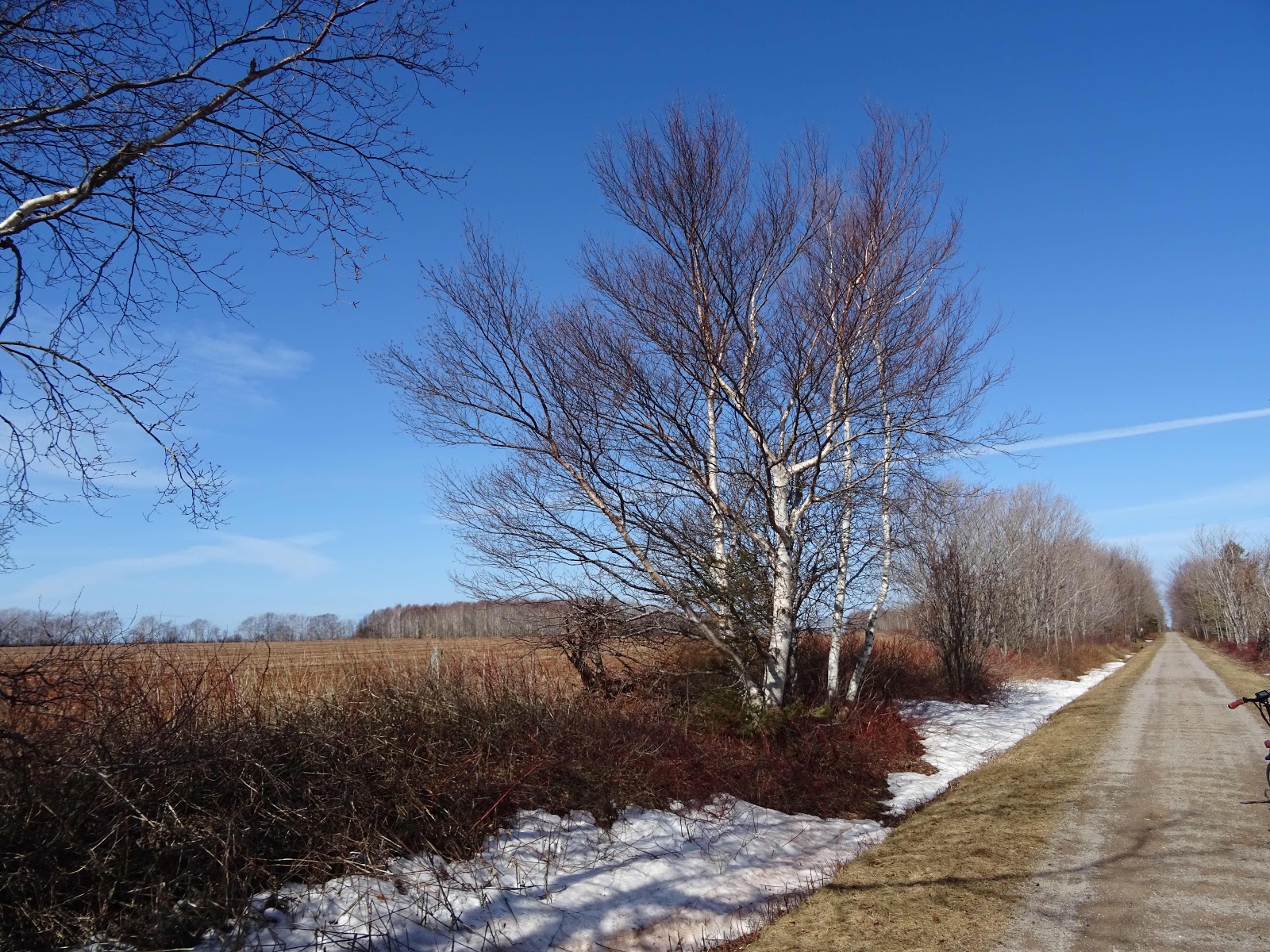 We smiled the entire time.

They're busy looking for mates!

I am often in the audience of an unseen chorous, but have never been able to express the experience in words, as you have done Marie. Just beautiful.

Love the way you have described this. I love our evening chorus when the Little owls are calling from one side of our garden to the other. They are very vocal but stay invisible!. Keep well, Diane

I love the photos and I'm so glad you were able to get out to ride and have such a lovely chorus to listen to along the way - perfection!

i have attended one of these concerts and they are amazing!! i am so happy you have been enjoying your bike rides!!

Thank you for your poetry and a peek at your concert hall.

Best seats in the house!

thank you for sharing your words about nature....wonderful.

How nice to be treated to a wonderful concert. You had the best seat in the house!

Marie...there is so much music in your writing.
It accompanies the great photos.
I want to ride with you..
Sue

We are smiling now.

I am smiling too - not least because you are riding again. Woo Hoo.

I too stopped to listen while walking home from the bus today. I also saw a bunny hopping across the trail, and listened for my favorite hooty owl but he was already out and about, I guess. Love the fact that you are back out on the bikes! :-)

I smiled as i imagined all the singing.

When you get a chorus like that it's best just to listen to the overall symphony, rather than trying to pick out every instrument. The Song Sparrow is certainly giving it everything.

I hear such singing everyday in the woods around my house in the mountains. I can imagine your biking and enjoying those sounds. When I was a child and lived on a farm in SW Georgia, USA. our evenings in summer were filled with a chorus of frogs from the swamp a mile from our house. I can still hear it in my mind. I especially like the deep bass sounds of the bull frogs. Thanks for the lovely writing.

Bird song is the happiest of music, no wonder you were smiling :)

What a good description of the spring chorus!

They were wonderful those two lovely weeks of spring. It's cold again, and I don't go our.

Spring is a great time for cheerful tunes in the woods.

Birdsong is a lovely sound.

Your post is so beautiful written and I love the photos!

Dont you just e how birds just seem to sing for the joy of just being alive?

And you had every reason to smile.

I'm assuming it was you and your husband on your bikes. Those birds were so kind to put on the show for you and I'm impressed that you could tell some of them by their calls. I've never been good at that but my mother was an expert at identifying bird songs. Many years ago (maybe 1985) she spent the summer here in No. Carolina. At one point she got very excited because she was sure that she'd identified a rare bird (can't remember which one). We called the Audubon society in Raleigh and she spoke with them. She described what she'd heard and they kind of pooh-pooed it, saying it had never been this far south. Mother was quite insistent and the man grudgingly agreed to come down and try to see whatever bird it was. I'll never forget the look on his face when they came back from the bird search ... they'd both heard it and then saw it and he was as excited as Mother then and couldn't wait to get back to his Audubon buddies and tell them "what he had found." (You can see why I seldom argued with mother as I was growing up

What a scenic and melodious ride! We'll be back out on the Rads this Friday. It's supposed to be in the high 70s. Woo hoo!

They put on their best show just for you! :)

The very best kind of show Marie, especially in spring 🌸🐦

such a magical painting drawn by your enchanting words ,i felt almost there witnessing you smiling while absorbing the beauty of nature :)
thank you for sharing the splendor

What a lovely performance. Hard to believe you've still got snow on the ground there.