The Dunk River flows into the Summerside Harbour and a hike along the Dunk had long been on our To Do list. On the last good weather day last week, my husband and I ventured along the return walk of 7km, etched along the shoreline of the river, the fast flowing water a rushing soundtrack for the distance. You can hear the river here.

The area is home to one hundred year old trees, hemlock and yellow birch primarily. With trees that old, the wind can cause immense damage. 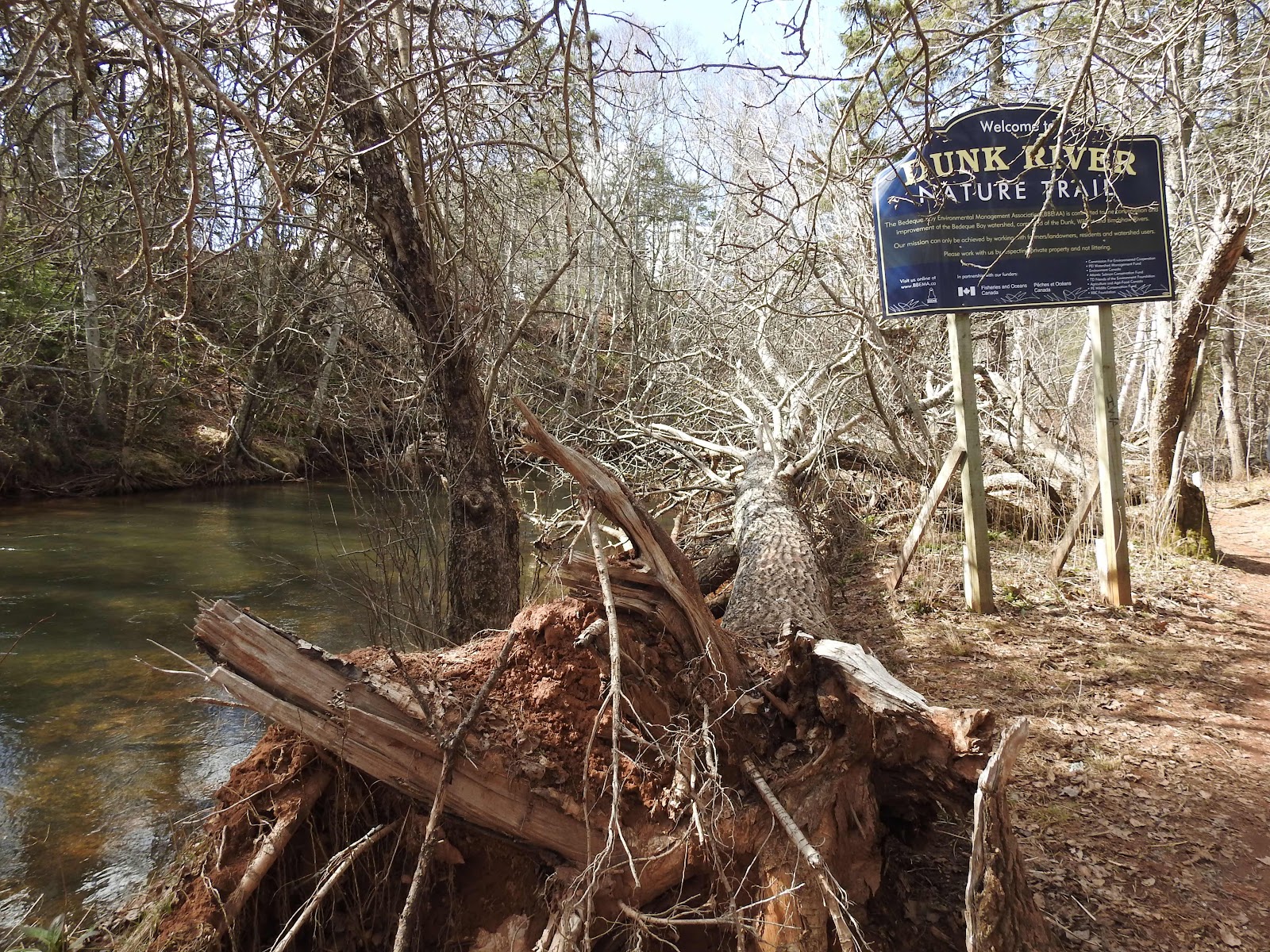 In addition, early spring in the forests of the island is primarily grey since the leaves aren’t prepared to greet the cold. Yet, the trail was starkly beautiful. 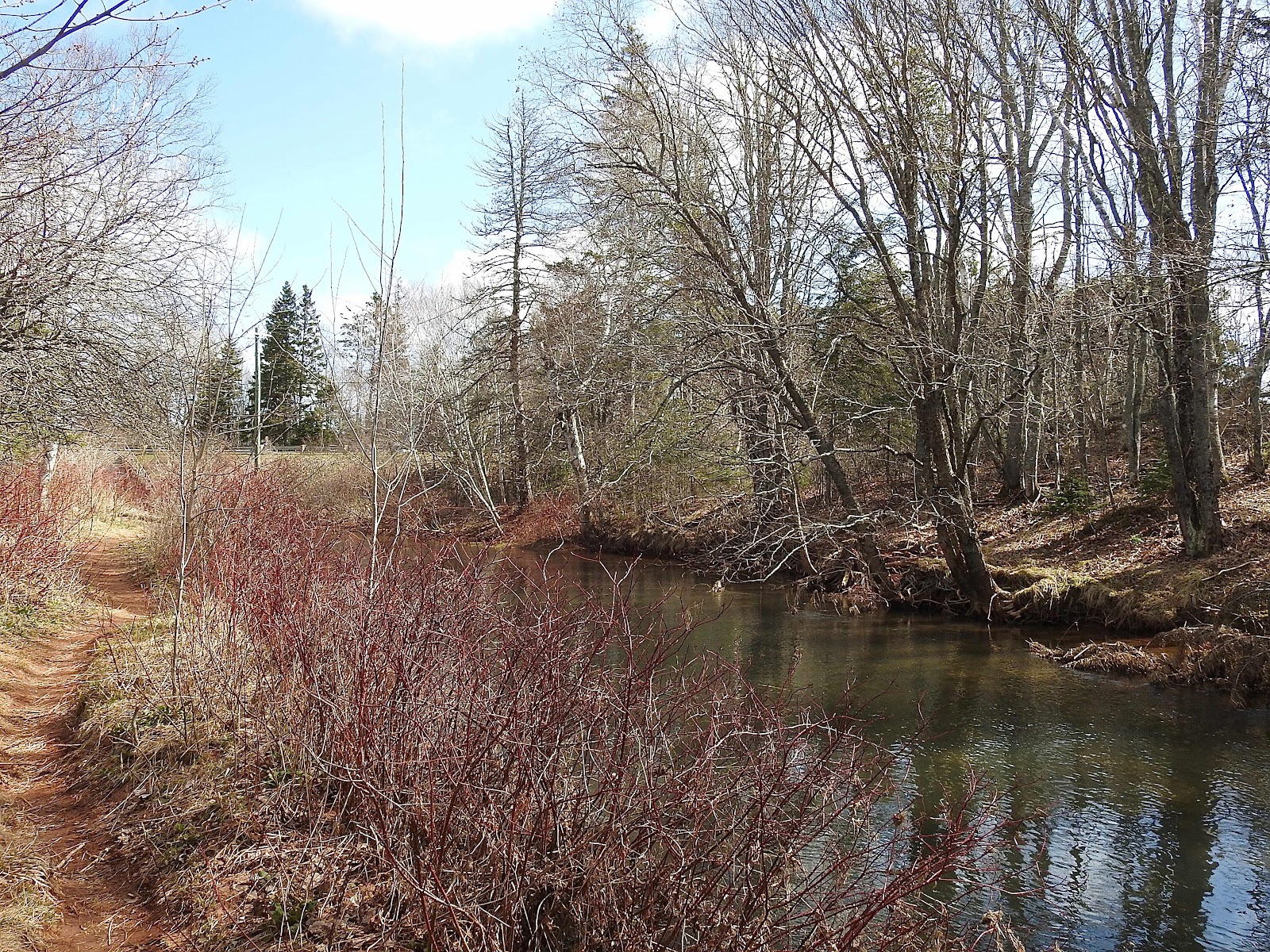 Undergrowth in some areas of this trail consists of Ground Hemlock, a type of yew which is harvested for taxanes used in cancer treatment. This yew provides an uncommon green for this time of year. 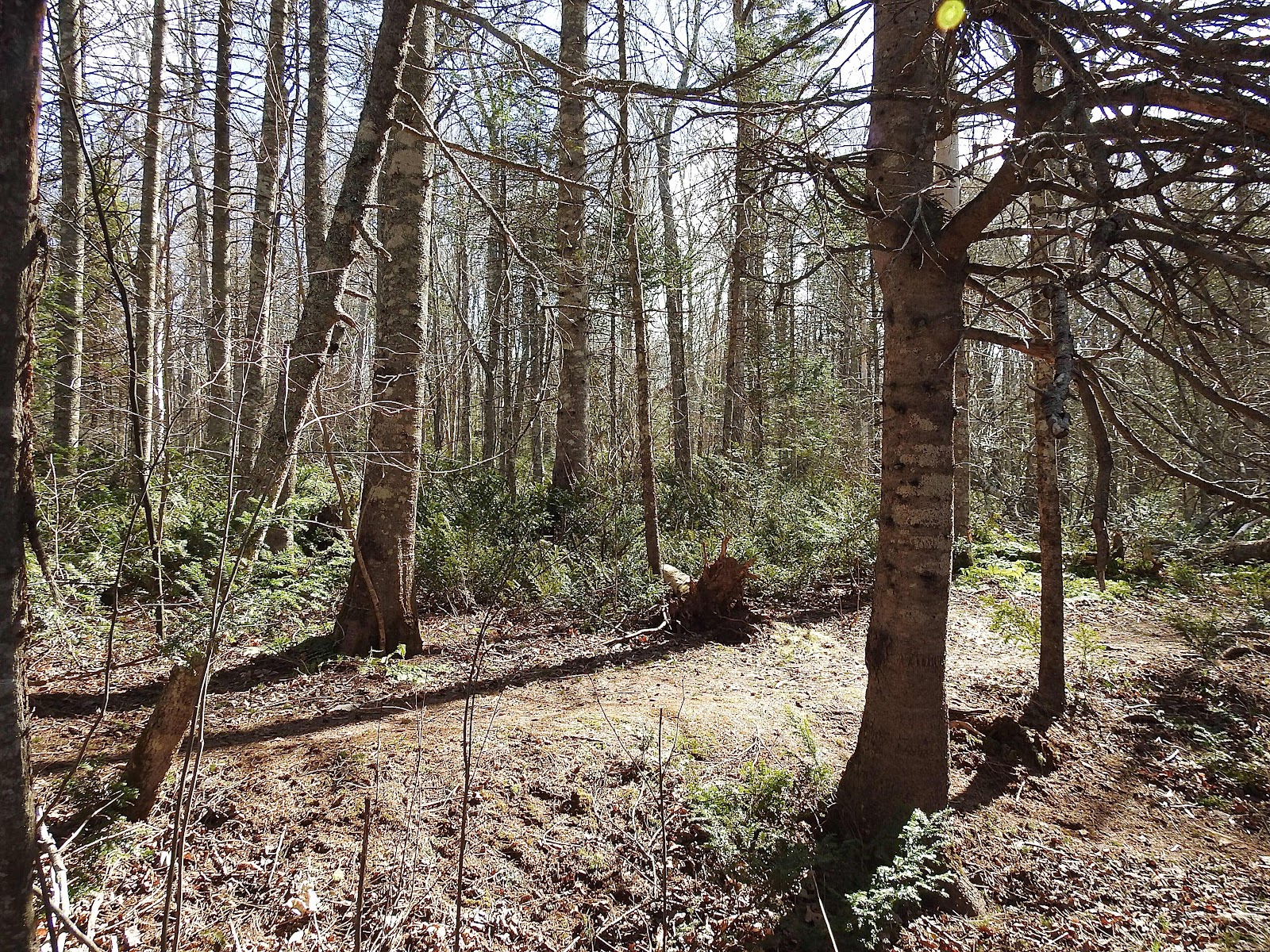 Two sections of this trail give hikers the option to walk along the water’s edge or a few meters inland. 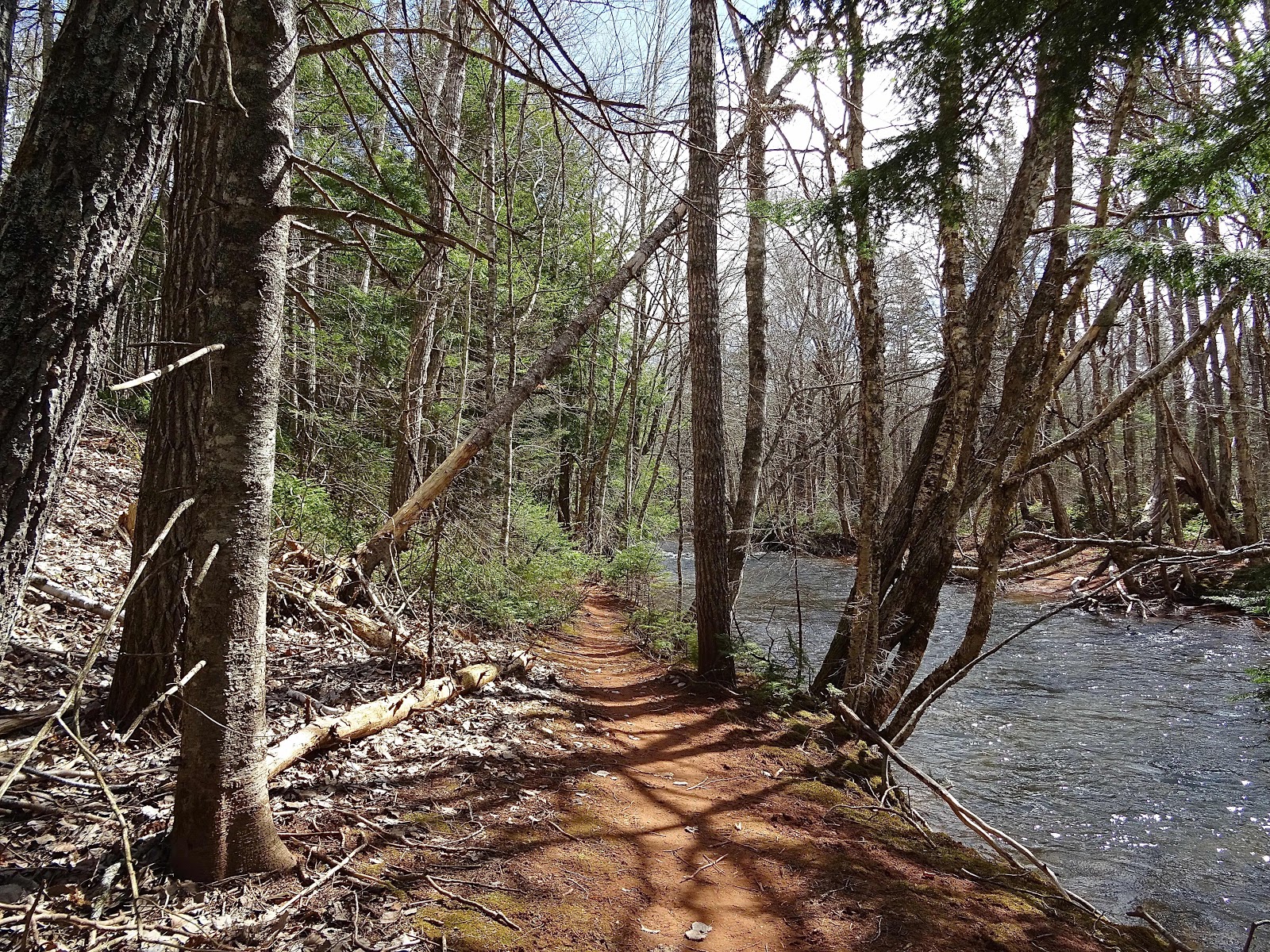 We tried both, switching to the other when the going was rough. The sound of the running water fills the river valley. 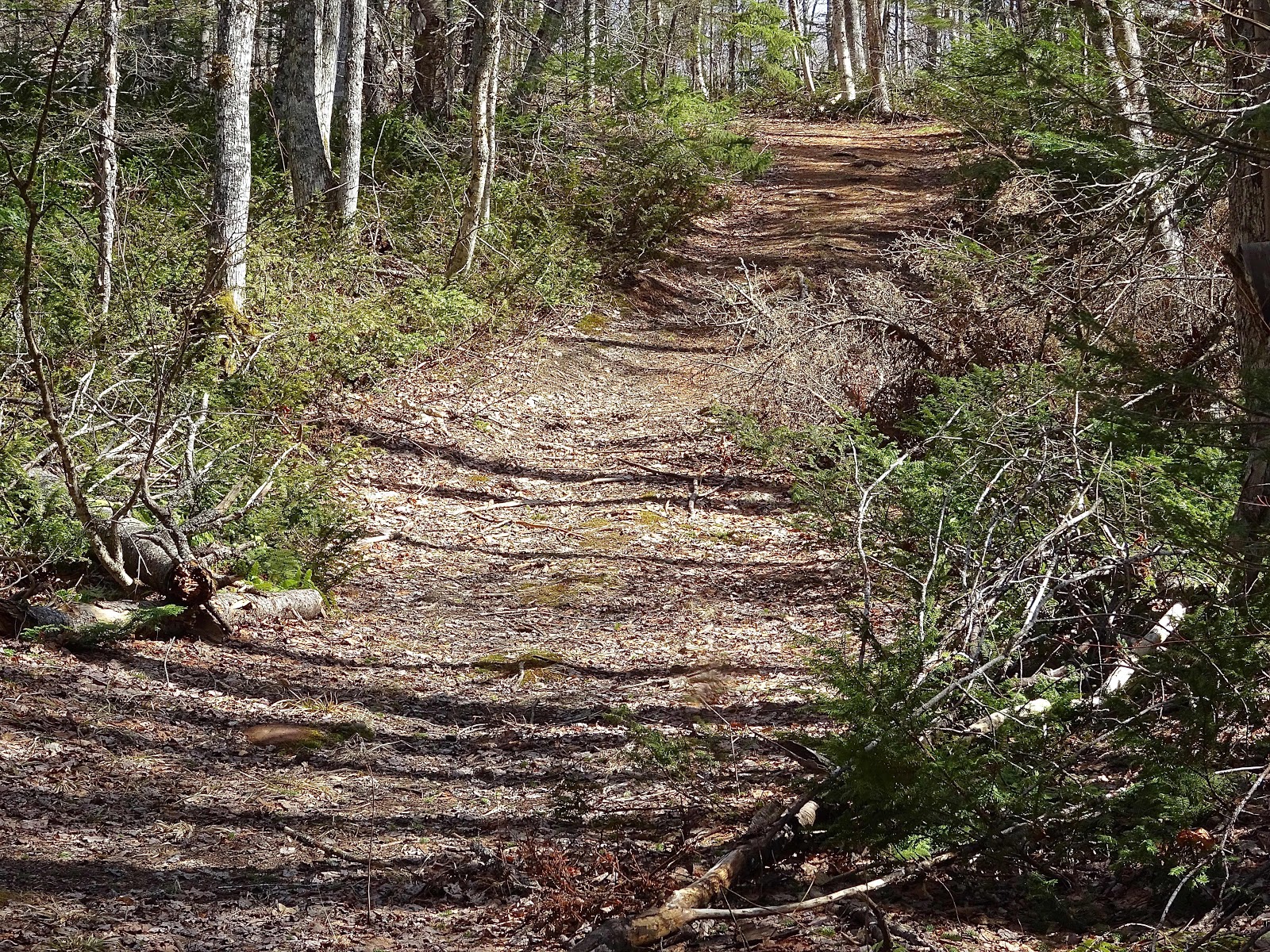 We spoke to a number of anglers along the river. 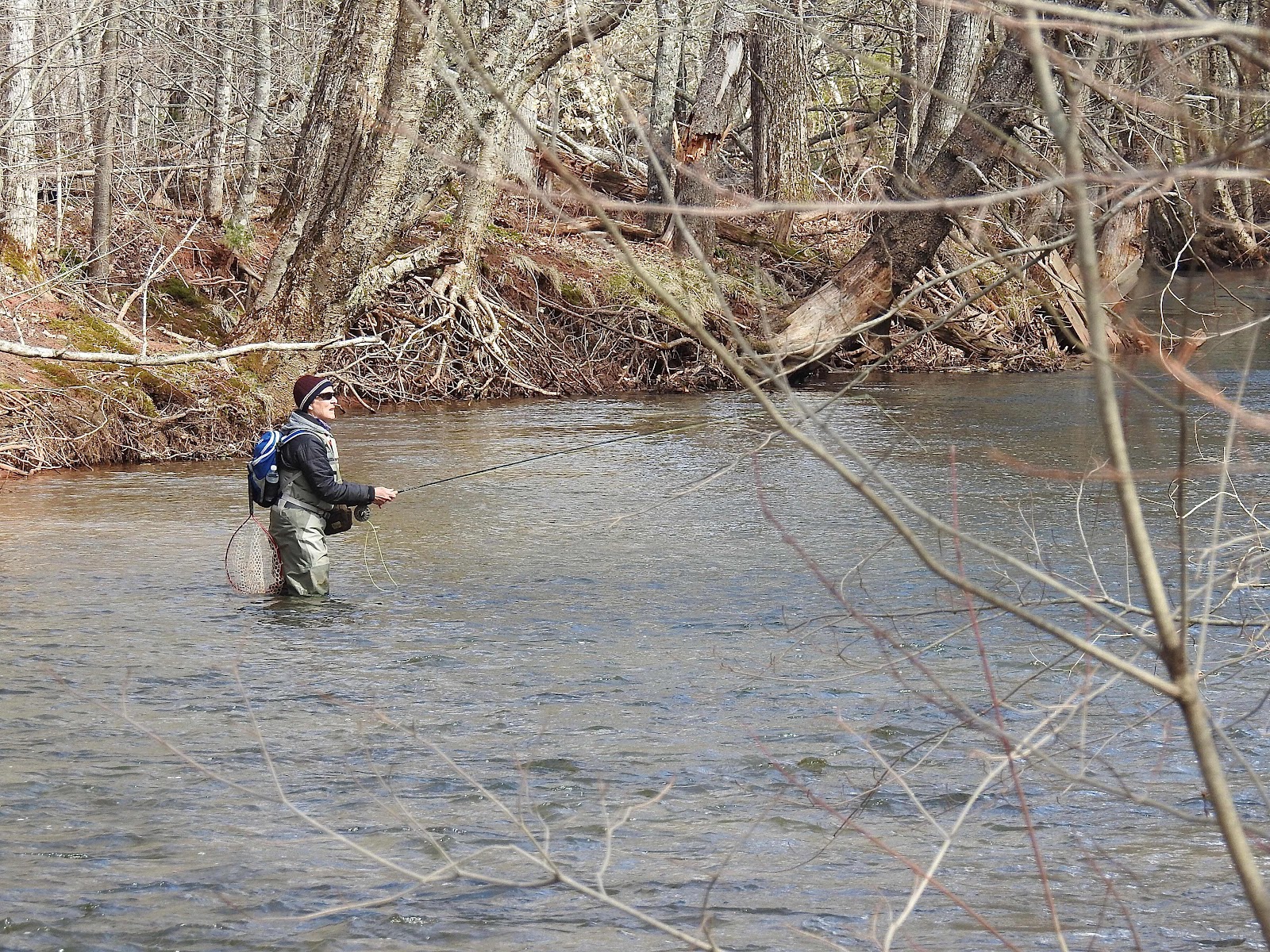 The Dunk River is one of the great fishing rivers on the island and anglers were enjoying time on the river during one of the first few days of the season. It was a long winter and time outside is precious now.

Water striders on the river in a few locations were the only insects we saw. They were close to the river bank which made them easy to spot. For striders, walking on water is a reality. 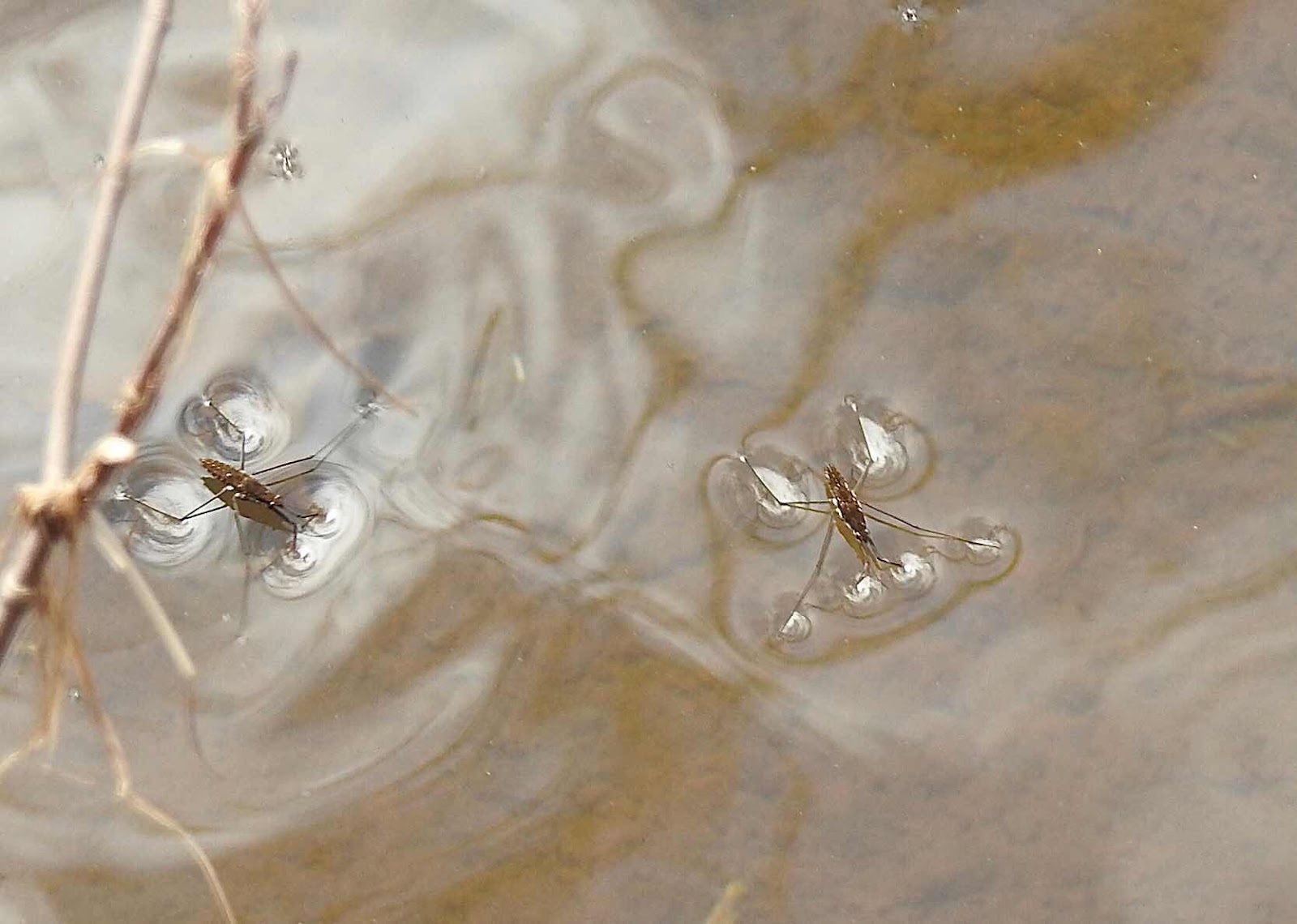 We will walk the Dunk River Trail again when spring has a firmer hold and the leaves are beginning to grow this time next month.

Beautiful post and images on Earth Day Marie, it's the first time I've seen water striders, very cool they are 😊

A lovely place for a hike.

Great walk. It is a pretty trail, lovely views of the trees. I have never heard of ground hemlock. We have some big Hemlock trees near us, they are pretty. Take care, enjoy your day!

I subscribed to your YouTube channel. Is it new? This is great. I'm hoping for longer videos of nature just being. Thank you for doing it.

A very lovely place for a walk. I love seeing PEI in all seasons. Happy Earth Day!

It's all so pretty and peaceful, especially with the soundtrack to go with it!

I resist the urge to write a cheap and easy pun.

Looks like a great place to take a nice walk. Bet it will be even more beautiful once summer fills out the trees. Thanks for stopping by the furs blog and checking on them..They love it.

Wow what an nice hike to the river!!I just waited for the crocodille to turn up hi hih..Ilove to go fishing and to eat fish

Happy days to you!

Do people take a dunk in the Dunk?

Your last photograph is a true prize winner.
Love the striders with their "pontoons" on their feet.
I also love the starkness...perfect settings for fabulous photos.
Sue

Wish I could hear, the loveliness of the river sounds...

Love the name Dunk River Trail. I can just imagine how cold that water is! I've never seen or heard of striders before. Such an educational post!

we are all looking for and finding great places to walk and spend time outdoors!! you definitely found that here!!

but inquiring minds want to know, did you take a dunk in the dunk???

Nice to see a bit of green appearing in the trees now. But our green came to a halt yesterday with a dump of SNOW! All melting now, but it's not supposed to snow in April, against the rules.

What a beautiful trail. Wonderful to hike along the river!

It looks like our bush - starkly beautiful. I have a bad back just now and am missing my walks. Your photos took me there. Thanks so much. And yes, wind can make a mess in an older bush. So can the pileated woodpeckers. We took a drive through the passable trails in my husband's bush runner last week and saw only a few hardy hepatica. There will be lots more to see next week after the snow melts.

That trail is pretty now and i can imagine how ;lovely it will look all dressed in fresh green leaves.

My Kind Of Walk - Thank You - Thank The Hubby For Me - What A Peaceful Field Trip - Also, As Little Kids, We Called Them Water Skippers Because We Didn't Know Any Better - That Path Along The Creek Photo Is Postcard Perfect - Well Done

I bet that was an awesome hike. Loved the sound of the river.

Wonderful close up photos. Enjoyed the tour . thanks

Hemlock tree is one I like. But they are dying out here in North Idaho.
I hope fisherman had some good luck and caught a nice mess of fish.
Coffee is on and stay safe

Love walking or sitting beside water, especially when it sounds so good :)

By this time next month it should be filled with birds and their song, which I hope your ears will pick up above the noise of the river. Be sure to let us know what you see!

How wonderful to have the sound of the Dunk accompany you on this lovely, sunny walk.

7 km return is quite long distance to enjoy the beautiful environment along the river...
water look calm and clean .... love to go fishing.

we wait your spring story about the river... must be interesting.

Beautiful hiking path, the area will be interesting to see how it blooms in color with warm weather.

A beautiful trail to hike. I could spend hours there by the water just looking and thinking. Beauty is never far from us, all we have to do is seek it out. Well done, Marie, I enjoyed this hike. Thank you and have a nice weekend too.

thank you for refreshing my soul once again
more blessings to you and your family!

Wonderful place for a stroll. ..

Fabulous set of photos. We call then Water Boatman here the look the same as the striders! Have a good Sunday, Diane

I loved the picture of the water striders! A refreshing and enjoyable walk along the river. I miss those kinds of walks from years ago in my weekend hiking days. Thanks for bringing back pleasant memories! 💖

You always manage to give us interesting and lovely photos of your ventures no matter what time of the year you post them. The water striders look like precious jewels !

Beautiful trails. the photo of the water striders is amazing. I think we call them water-boat-men.