Lunch on the trail

Our weather has been cold and wet with an occasional fine day. My husband and I take every opportunity we can to ride our bikes and we’ve been on the trail recently, enjoying every minute. 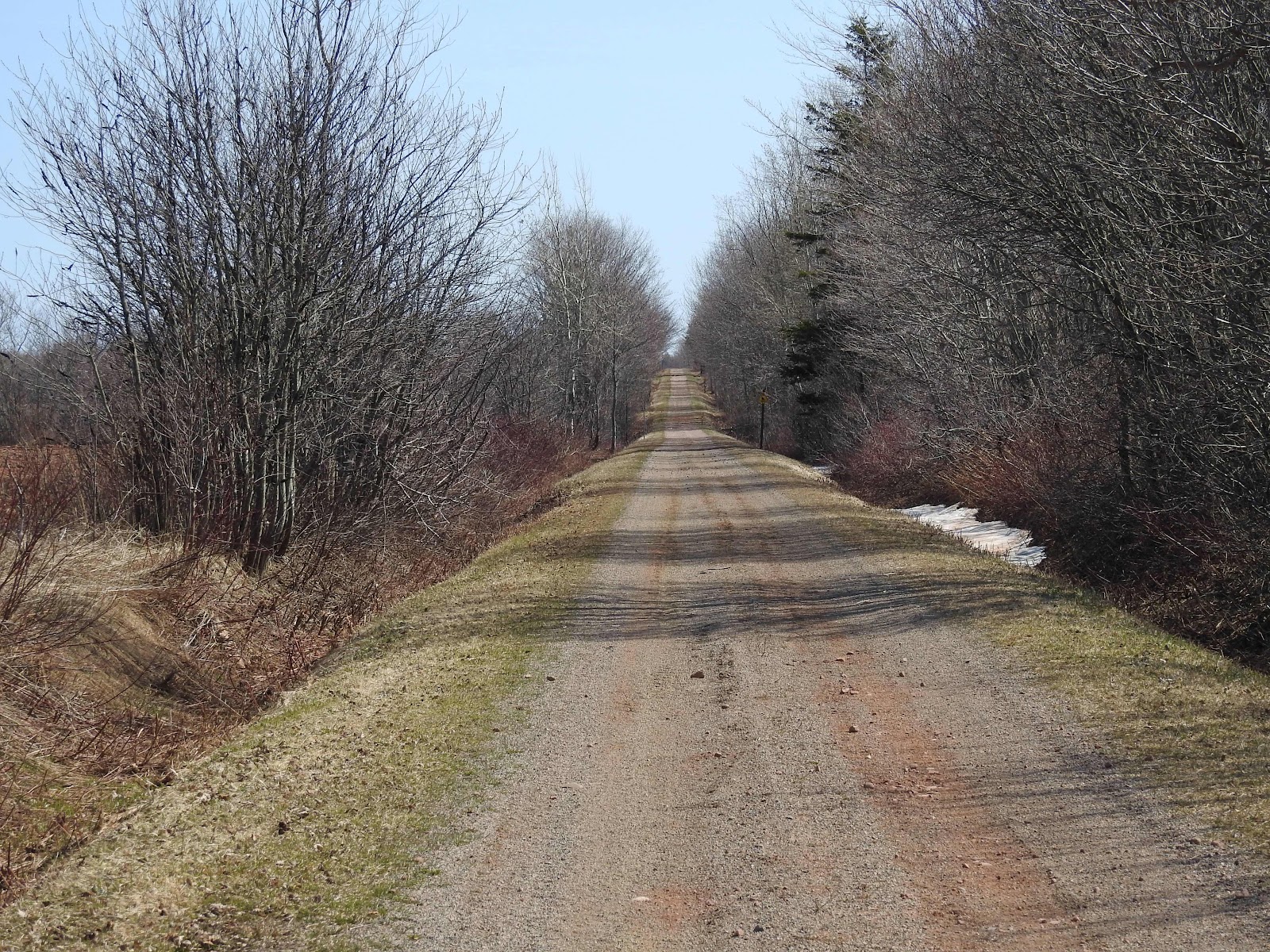 We take our picnic lunch with us on the new bike racks we received last autumn, replacements for two which were ill fitting. It is great to be able to stop at any of the picnic sites around the island for lunch. The National Park has lots of tables and the Confederation Trail has tables positioned at regular intervals across the island. 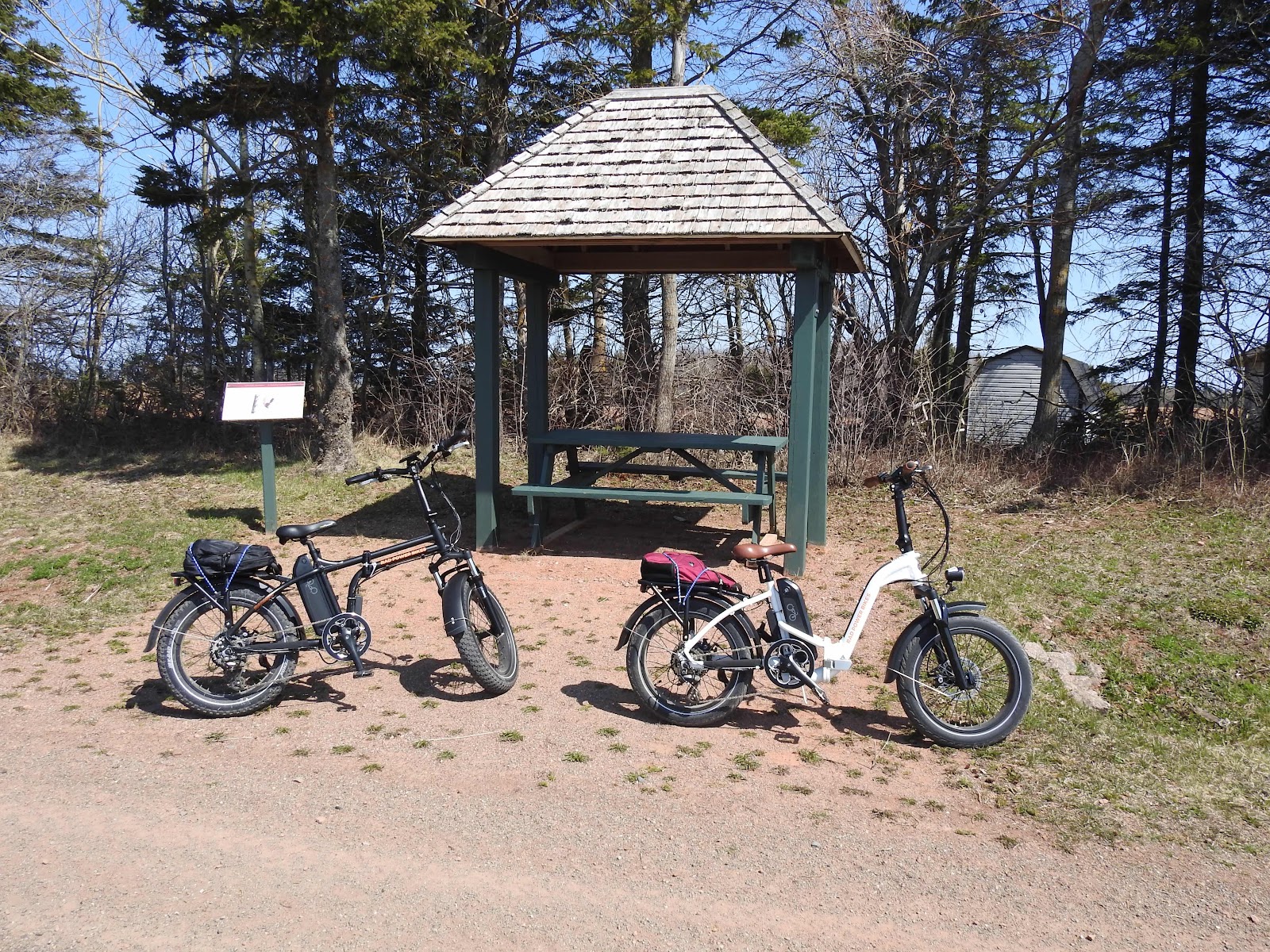 Meanwhile, we rode to nearby Wellington for a picnic one day, stopping at a table by a river. 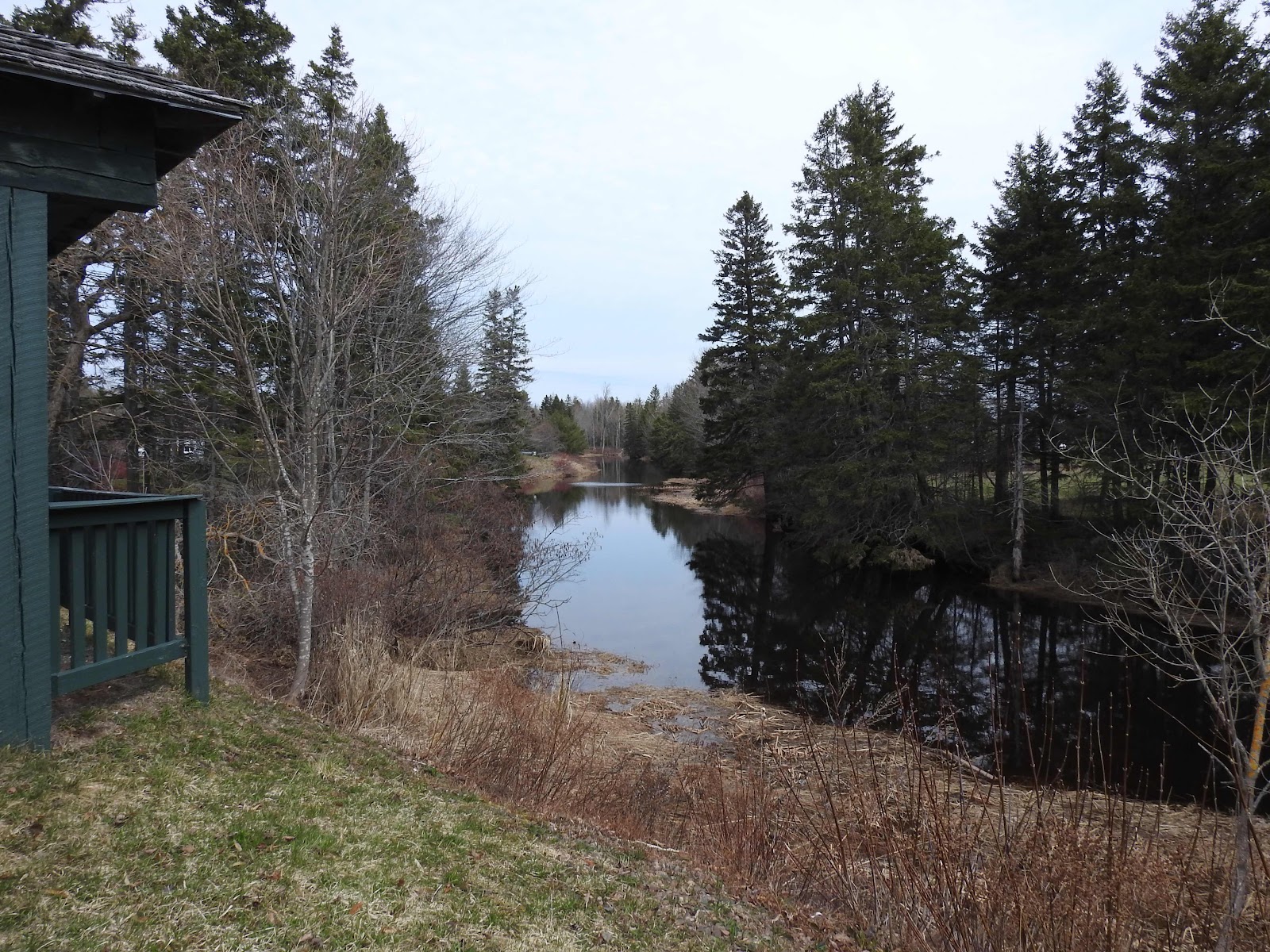 The sound of the water flowing by as we had lunch was like a dream after this past pandemic year. Nearby, noisy and nosy Common Grackles were chatting it up on a wire overlooking the scene. 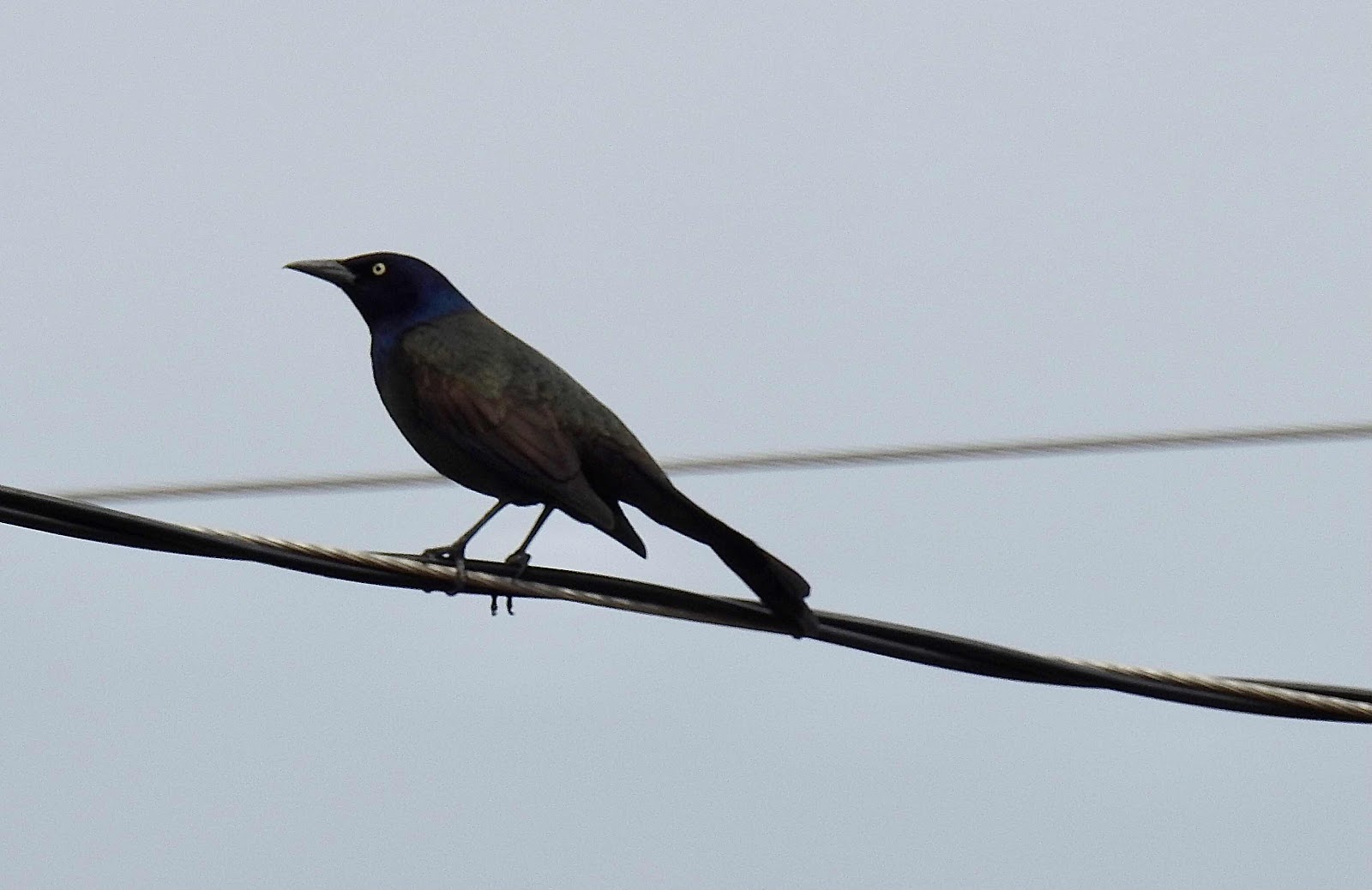 Our most recent outing was from O’Leary to Elmsdale along the Confederation Trail. Along the way we passed several locations where peepers and other frogs sang happily. One area had these cattails which looked as if they had cotton tops. 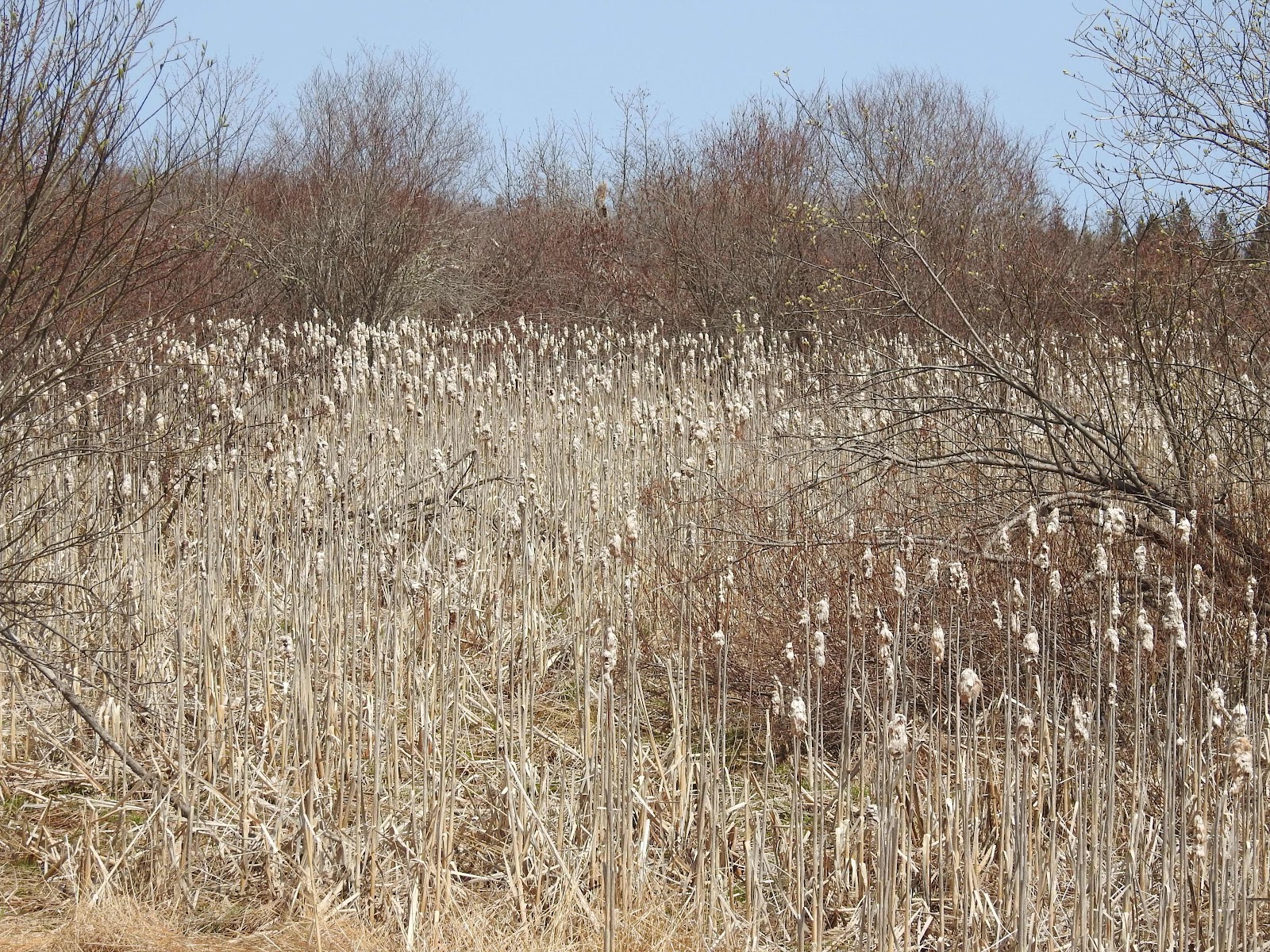 Near river banks now, Coltsfoot is in bloom, the first flower we’ve seen in our travels this spring. This type of daisy is a welcome addition to the greys of early spring on the island. 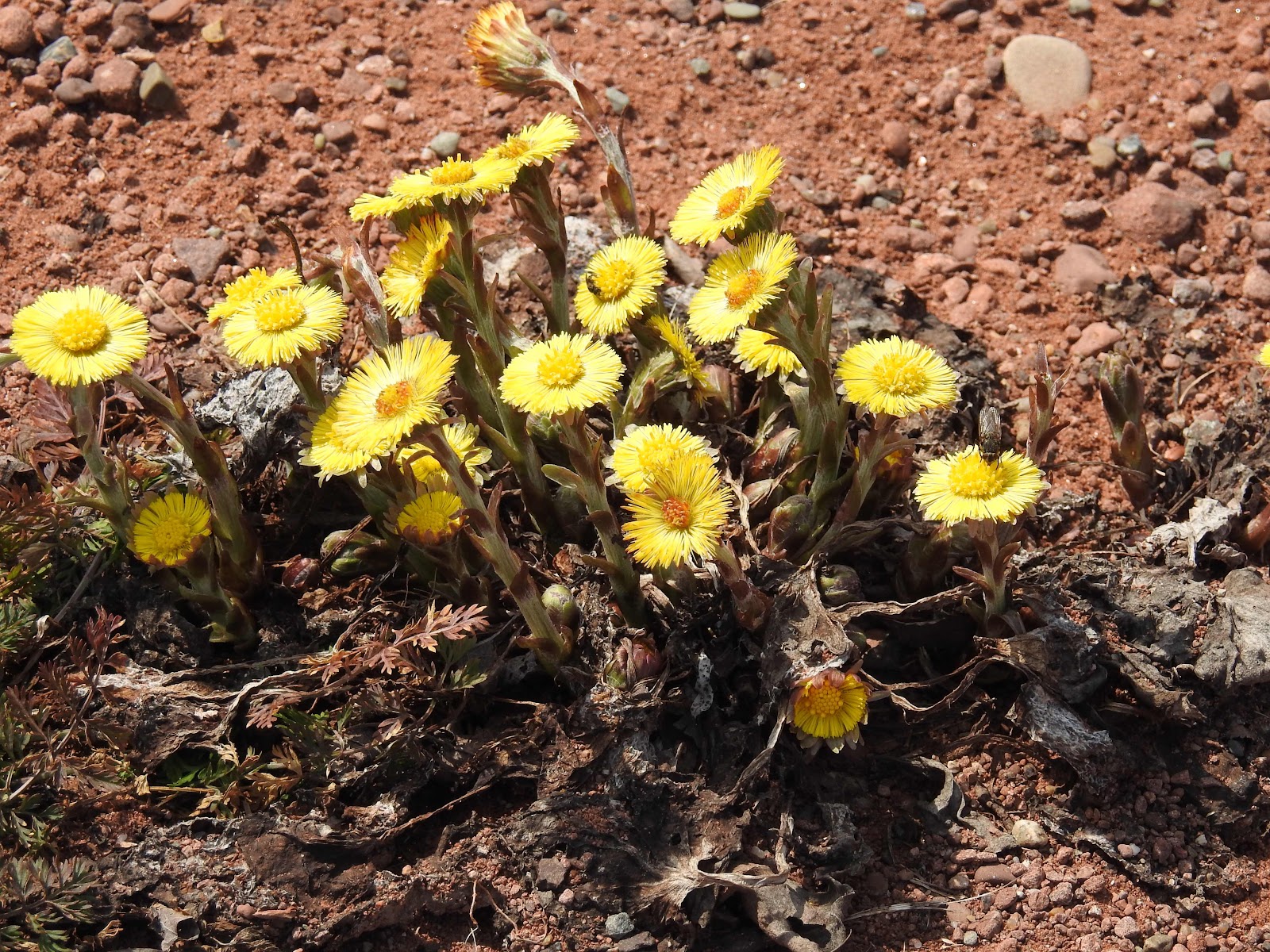 Butterflies are also busy. Despite several efforts, I was unable to photograph any as they flitted around us along the trail.

We had lunch at Elmsdale in an area where the trail runs parallel to the highway. The traffic on the road was light at that time of day.

Back at the car in O’Leary, Rock Pigeons watched us from a nearby roof as we loaded the bikes on the rack. While there are pigeons in downtown Summerside, we have never seen them around the areas we frequent. 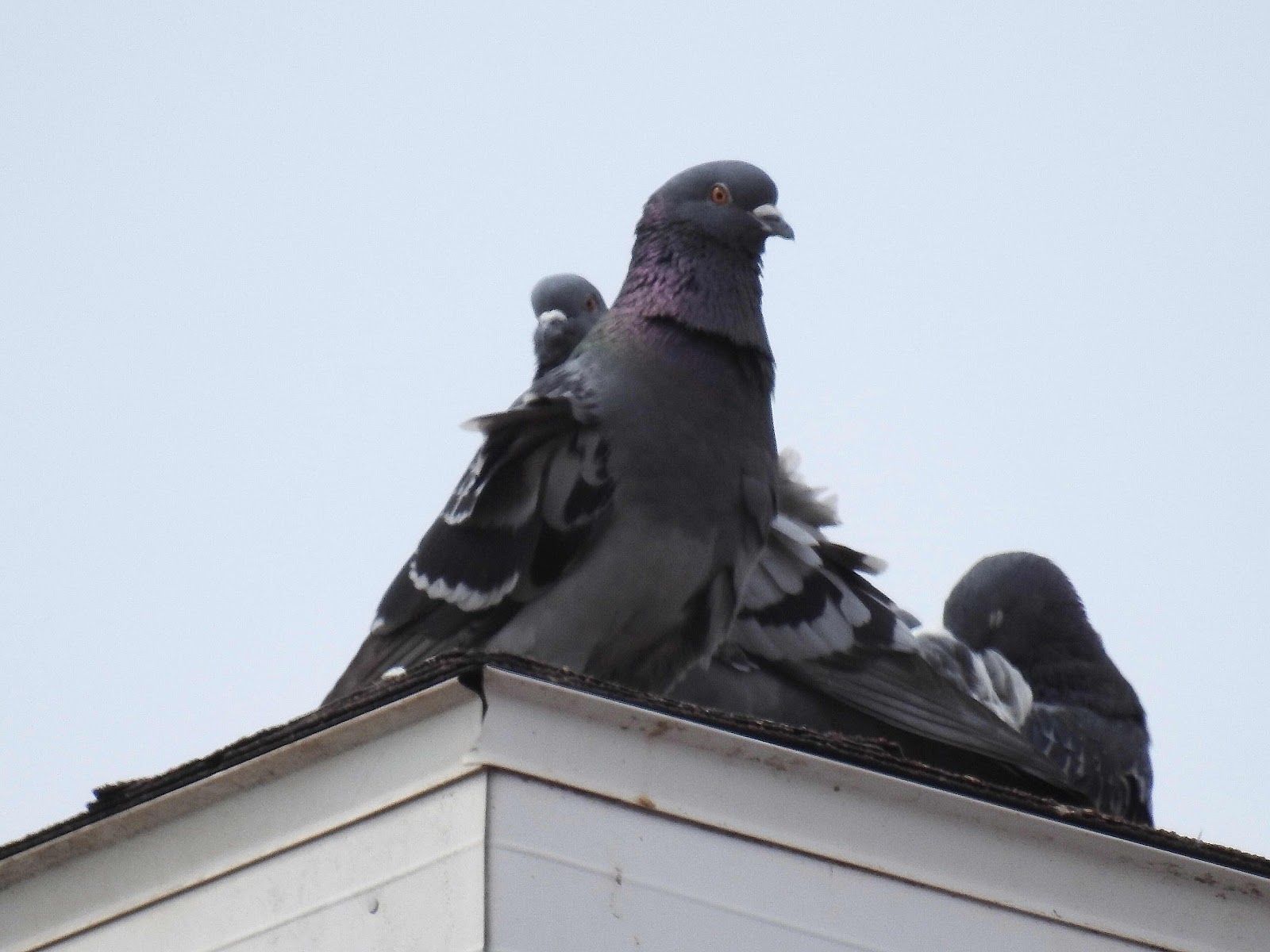 It has stopped raining so we are headed out on our bikes again today! Yay!

Good to be able to get out and about.

I like the idea of those well-positioned picnic tables, I always dither about where to sit down for a bite to eat. I wish you many more happy days on the bikes.

What everyone seems to call cattails, I grew up calling bullrushes. I am getting used to the former.

Thank you for including a picture of your bikes! It looks like a wonderful way to enjoy your beautiful island.

If I had discovered Island Musings 10 years ago I’d probably be living on PEI right now. :-) Yes, it just looks wonderful. Best regards to you from Seattle.

I enjoy it when you get out and about on your bikes also Marie, super shots. Are they your electric bikes?

'Bullrushes' is Biblical, AC, isn't it? My mother's family used that term too. I am so envious of the picnic lunches - our local Health Unit has required the town to remove all the picnic tables, much to the dismay of a friend and I who ended up eating our picnic lunch with a folding chair for a table. Not optimum, no, precious, no. Grrr. Love the coltsfoot. We have hepatica - not nearly as colourful. But my husband found one red trillium. Early, but, wheee!!!

Great photos and I love that you are able to get out on your bikes again!

ooooh mr. and mrs. bikes, they look fabulous, i am so glad you have gotten back out on them!!

i can't wait to get back out on mine, hopefully i will do better this year!!

Your bike ride and picnic sound wonderful! Lovely images from your outing. Have a great day!

Are there any Rest Room Facilities, along the way, when you are out on the trail?

Bikes, freedom and picnics make for a grand day.

What a WONDERFUL outing. For you and for us.
And yes, I find photographing flutterbyes a challenge - one which I often fail.

Those trails look so easy to navigate. Having any lunch outside always tastes better than indoors.

It's been cold and wet here too.

Those bikes look about the size of a bike I rode everywhere in the seventies. A folding bike, but very light. Those look much heavier.

A wonderful ride. Well worth waiting patiently for.
I believe from the webcam, that you had a glorious sunny day. I await the next post.

Be sure to say hello to the birds for me and assure them that when travel is once again possible I intend to greet them in person!

I love the name grackle!

Well done on your riding. We're off for a short walk with George and the grandchildren in a while

What a pleasant way to spend some time...the places you show are so appealing.

You can ride your bikes in such delightful places.
A picnic along the river sounds just about perfect.
I don't think we will ever get bake to riding a bike.
Dave's progress to get back on his 2 feet is a slow thing.
Progress but oh so slow. July before the Doctor says he can even put a tiny bit of weight on his left leg..
I keep telling us...One Day at a Time...
Sue

The Rad bikes are great, when it's not raining. We've had ours out several times, but now it's drizzly, so we won't be going anywhere for a while. I love how much we can see, hear and smell on bike rides!

Good to hear that you were riding with your bike.
All of your images are lovely.

PS..A friend of mine, Emi, loves Prince Edward Island very much.
She read many books and watched TV dramas from your country.
Last night she told me that she finished reading " Road to Avonlea".
So I sent the image of your header to her last night and she was so happy.
Thank you Marie.

Freedom!!
Your trails are not filled with people. You are lucky!

What wonderful photos and an awesome sounding ride. This looks like such fun, and it seems you have the perfect place for these bike rides. Enjoy all you can!

I like the look of your bike, it looks as if it would be easy to get on and off. I am not a very confident bike rider and the bike I have is very large and heavy, and spends much of the time in the basement with 2 flat tires. I worry about riding it on my own.

Hi Marie. I, of course, have heard of coltsfoot daisies but don't remember ever seeing them They are much bushier than our daisy. Lovely.

To answer your question about my latest blog entry ... NY City is VERY different than it was in the 50's. It's been cleaned up a lot but I wonder how it's fared this past year through the lack of attention due to the pandemic.

Very nice set of pictures - the bikes look good too (especially as I think that they may give you a bit of help on the steep parts of the track!)

how nice to have new set of benches ,great place to sit and have lunch :)

i love when you share about your bike ride dear Marie ,these bike are different than those we have here ,must be comfy and smooth .

loved the river and birds on the way