Just off-shore, two fishers work to flush oysters. The tasty molluscs grow in brackish water which is often sandy. Sandy oysters wouldn’t be marketable so fishers immerse them in clear sea water for a time to flush out the sand before the morsels are sent to market. 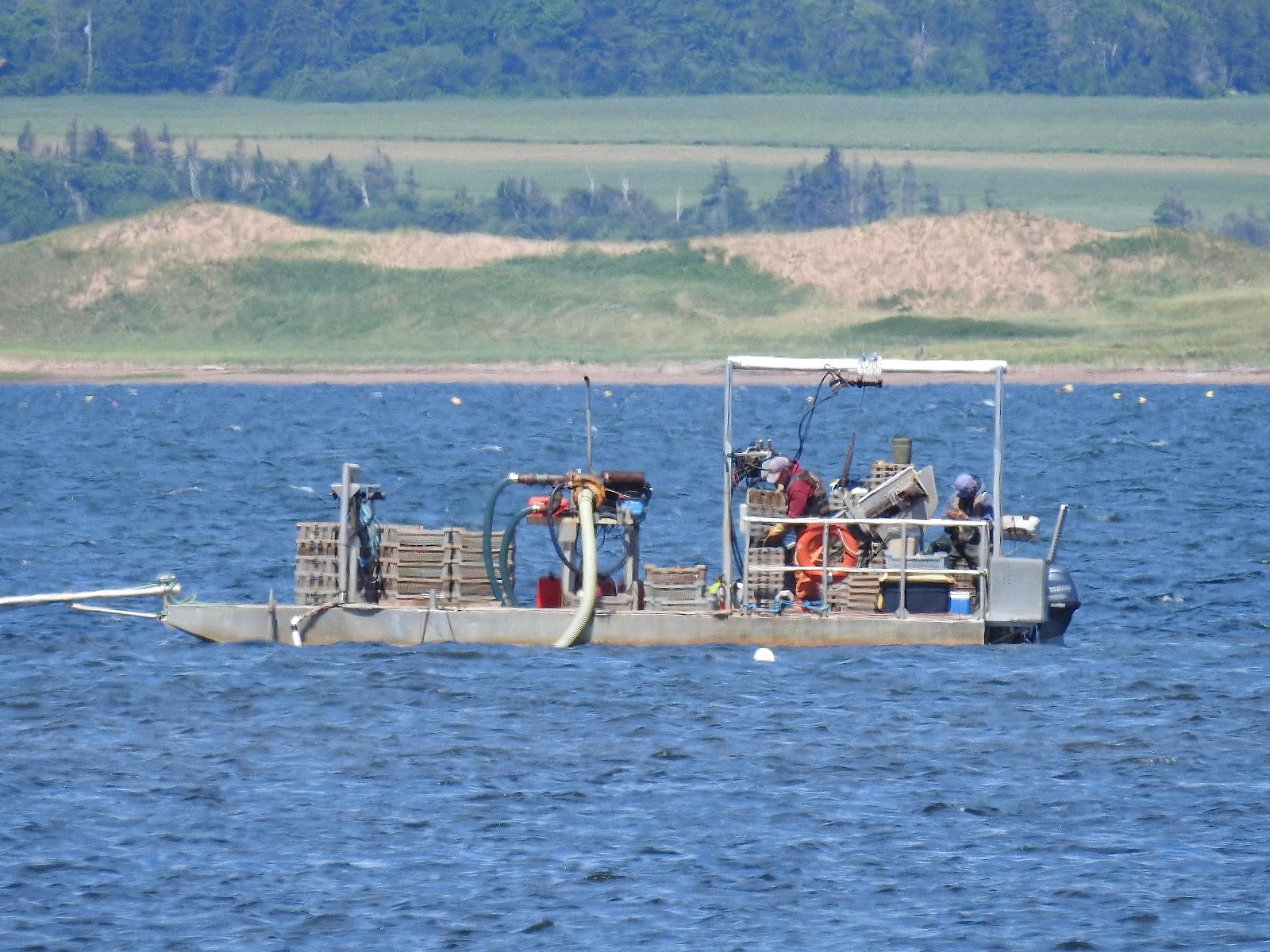 We could see the cages with the oysters. This area is in New London Bay, tucked behind the sandspit at the western end of Cavendish Beach.

My husband and I had loaded our bikes and headed for the national park at Cavendish in Prince Edward Island. It is one of our favourite places to cycle and we visit often. There is always something different and interesting to see as we ride. This oyster cleansing was a first for us.

On the way to the Homestead Trail, we pass a patch of giant Cow Parsnip, 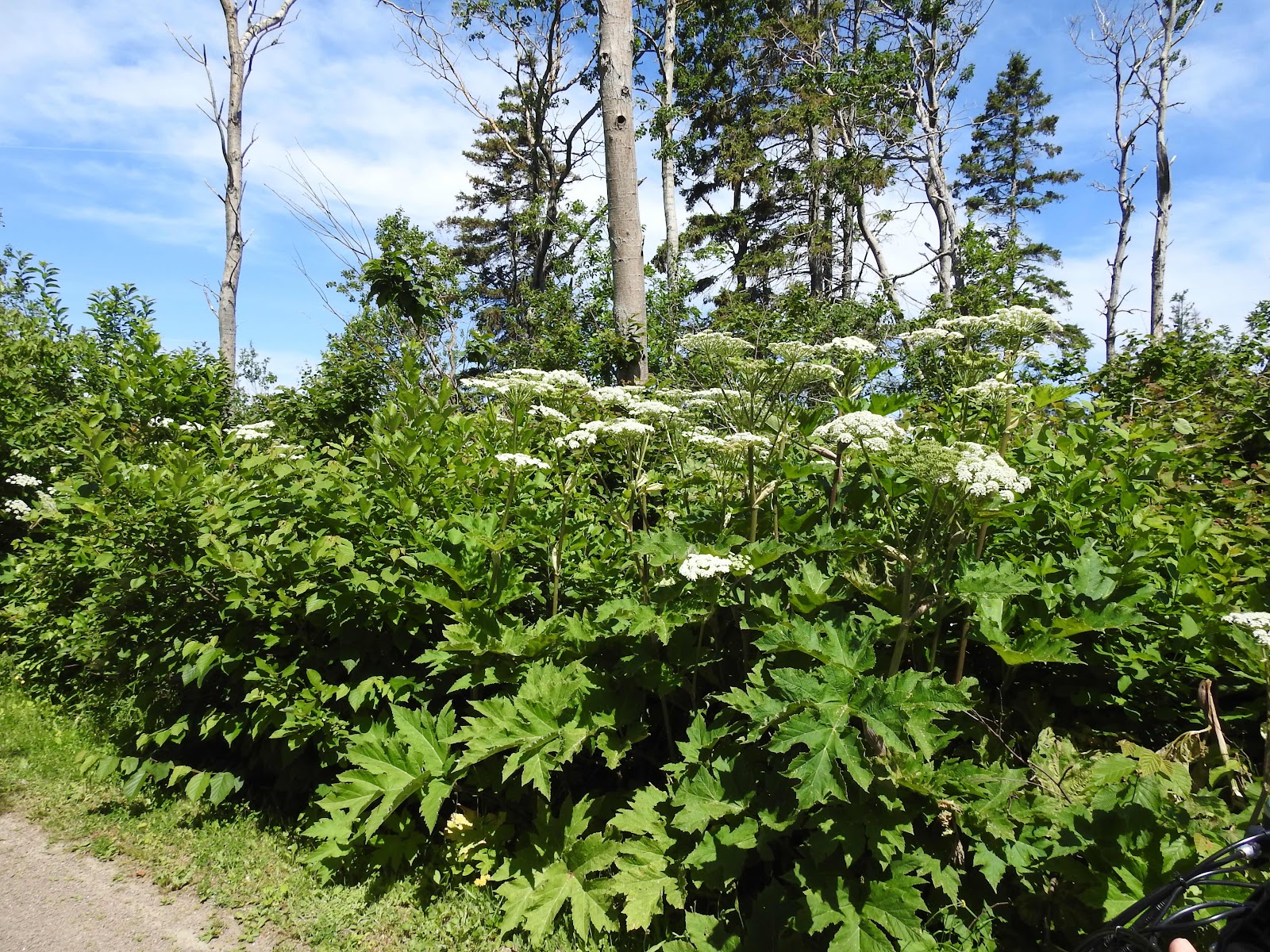 which is at least waist height now. It resembles Queen Anne’s Lace which we haven’t seen yet this year.

Overhead, the contrails are back. 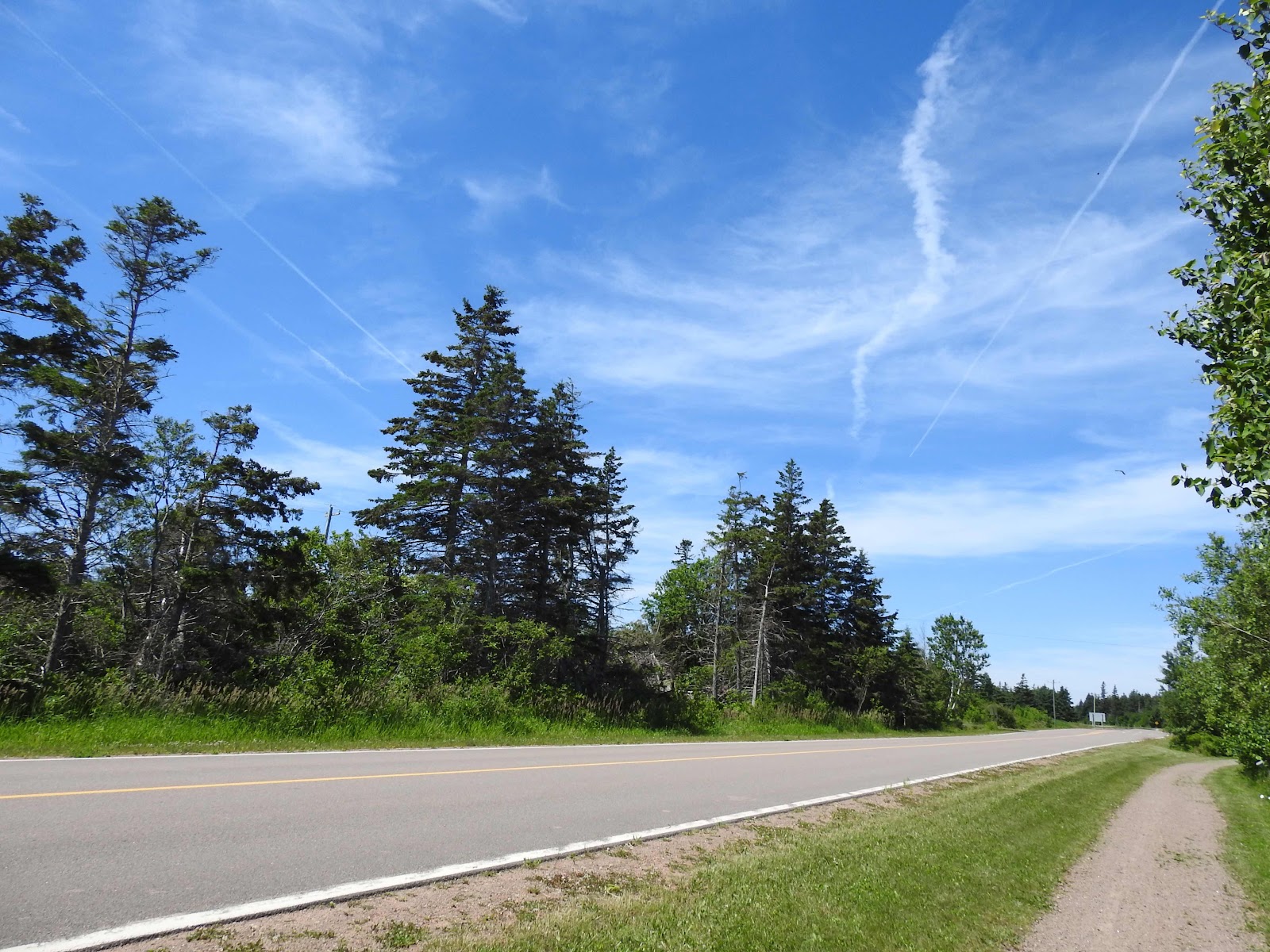 Skies above Prince Edward Island are usually full of air traffic from across the Atlantic and the rest of North America. This past year, the contrails have been missing. Seeing them this day is a hopeful sign about returning to pre-Covid life.

The Homestead Trail is bumpier than we remember but it adds a new element to the journey. The canopy covers the trail in places and the bumpy downhill ride through light and dancing shadows makes us laugh when we compare experiences at the bottom of the hill. 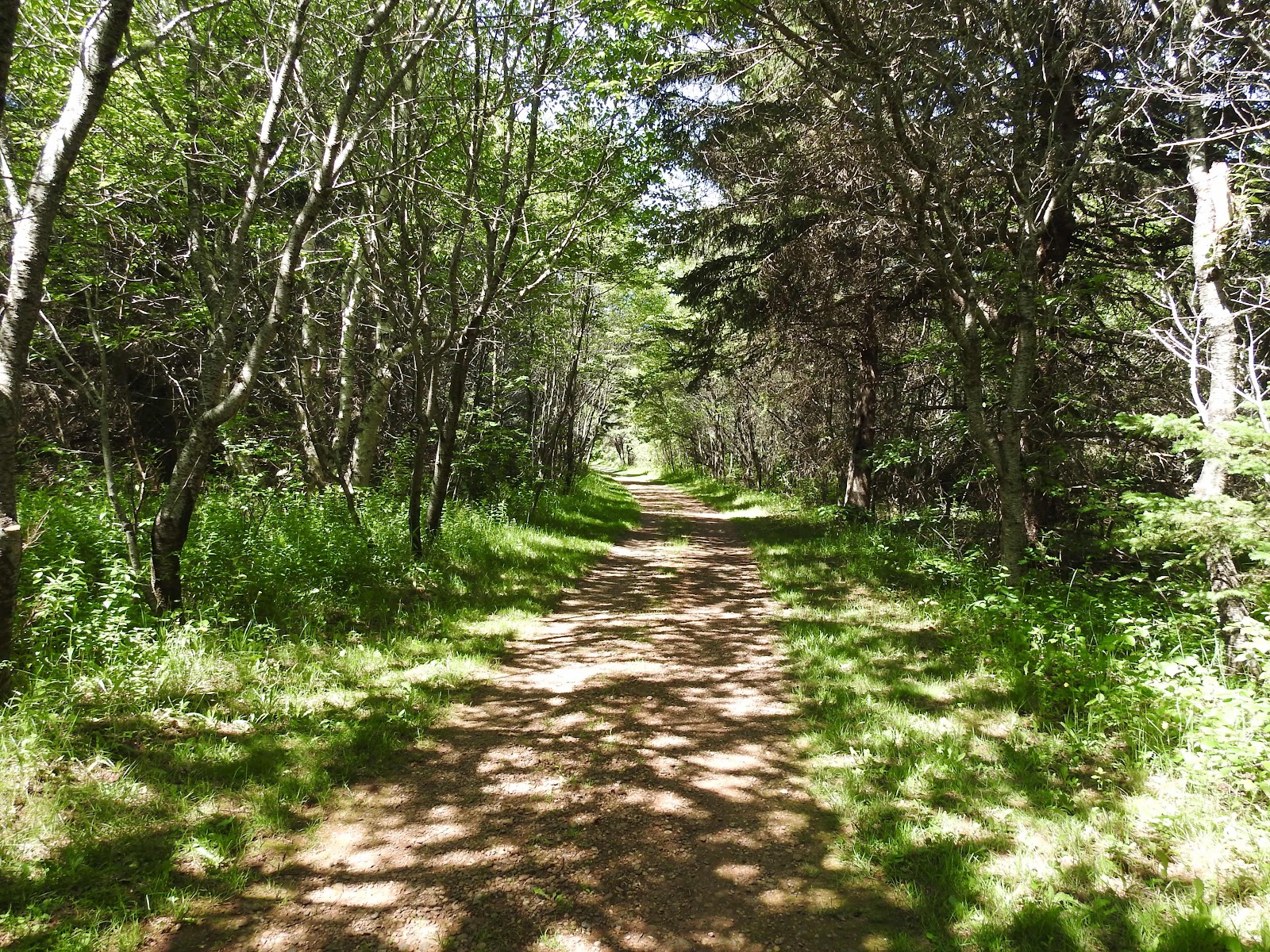 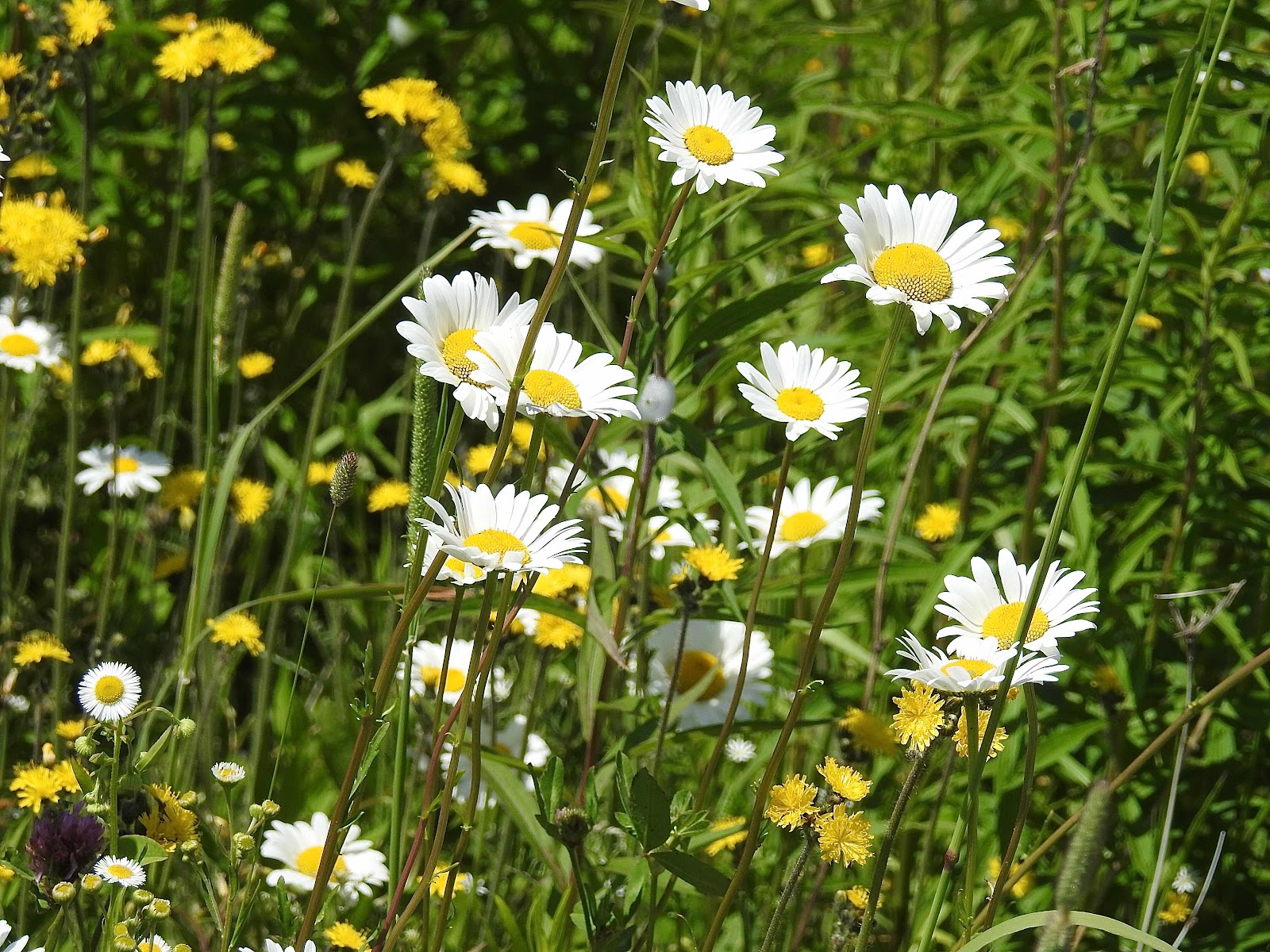 a succession of colour and variety, so we stop often. Beautiful floral faces reach for the sun. Rose bushes line a picnic area. 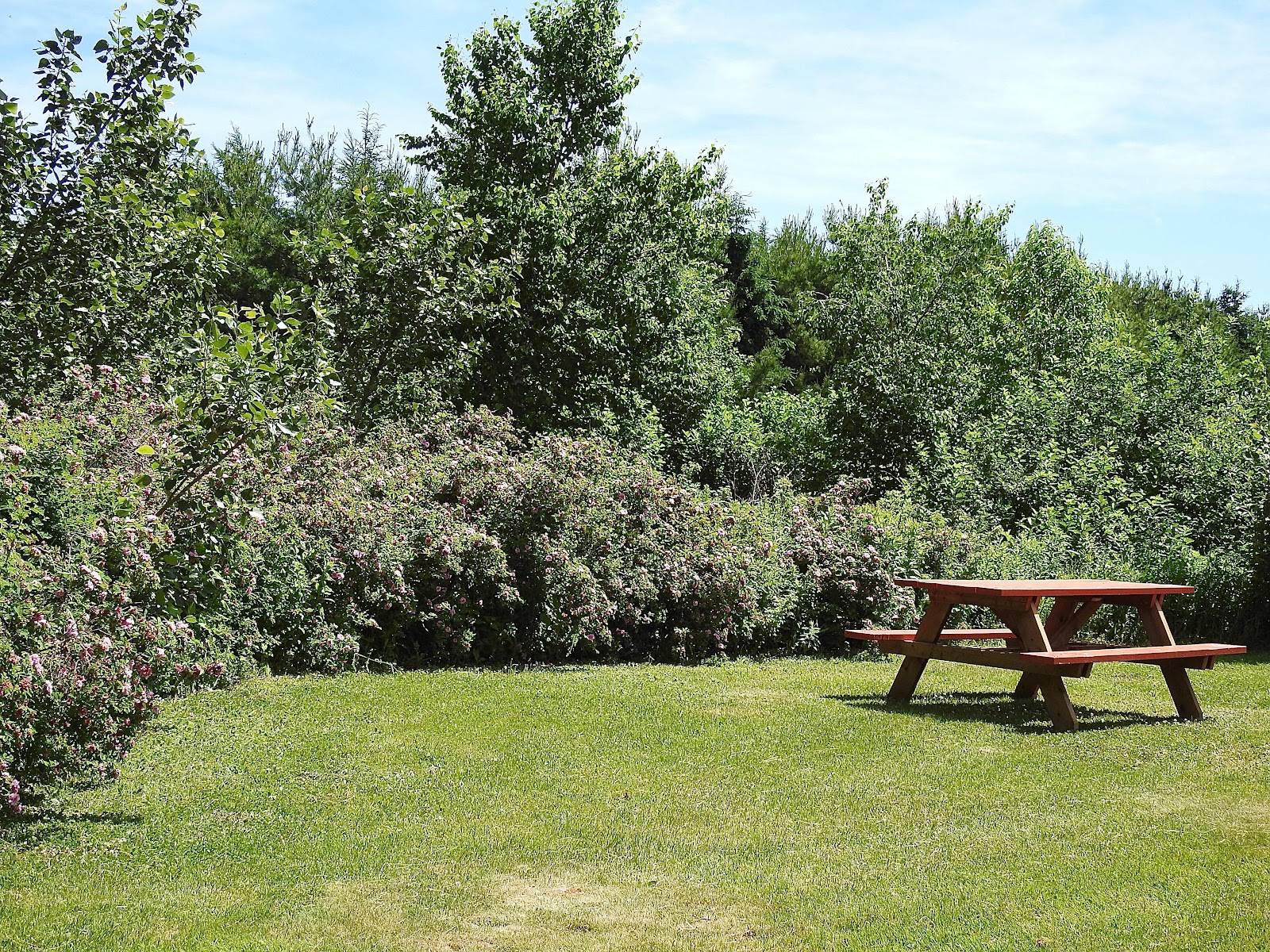 Was a homestead here at one time?

Wild Madder is everywhere along the trail. 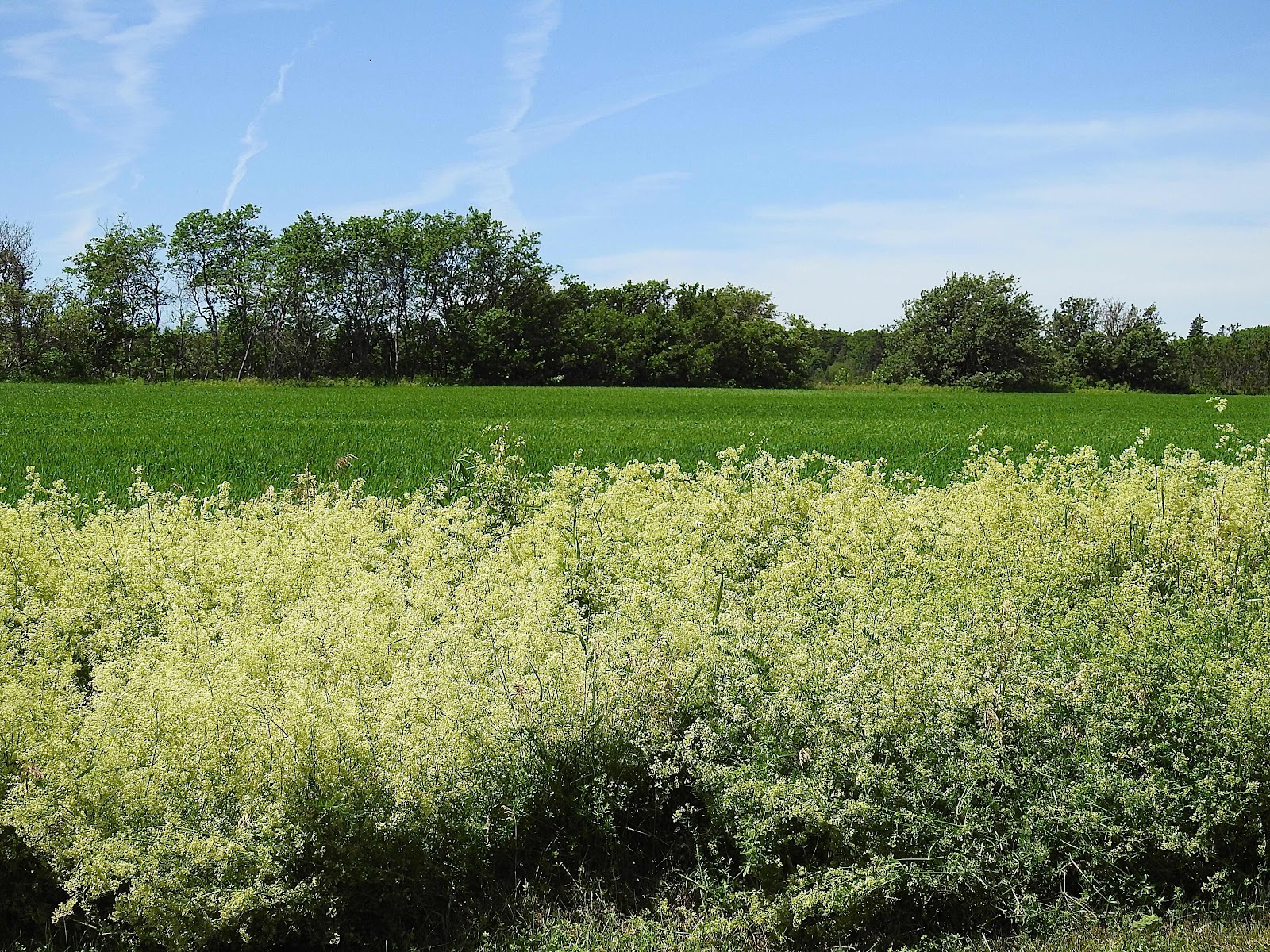 Also known as Smooth Bedstraw, early settlers used it for mattress stuffing. It is also a source of dye and today pharmaceutical companies research its bioactive ingredients. Of course, it was used in traditional medicine.

Later, beside the Lake of Shining Waters, lupins reach for the sky too, with the dunes of Cavendish in the background. 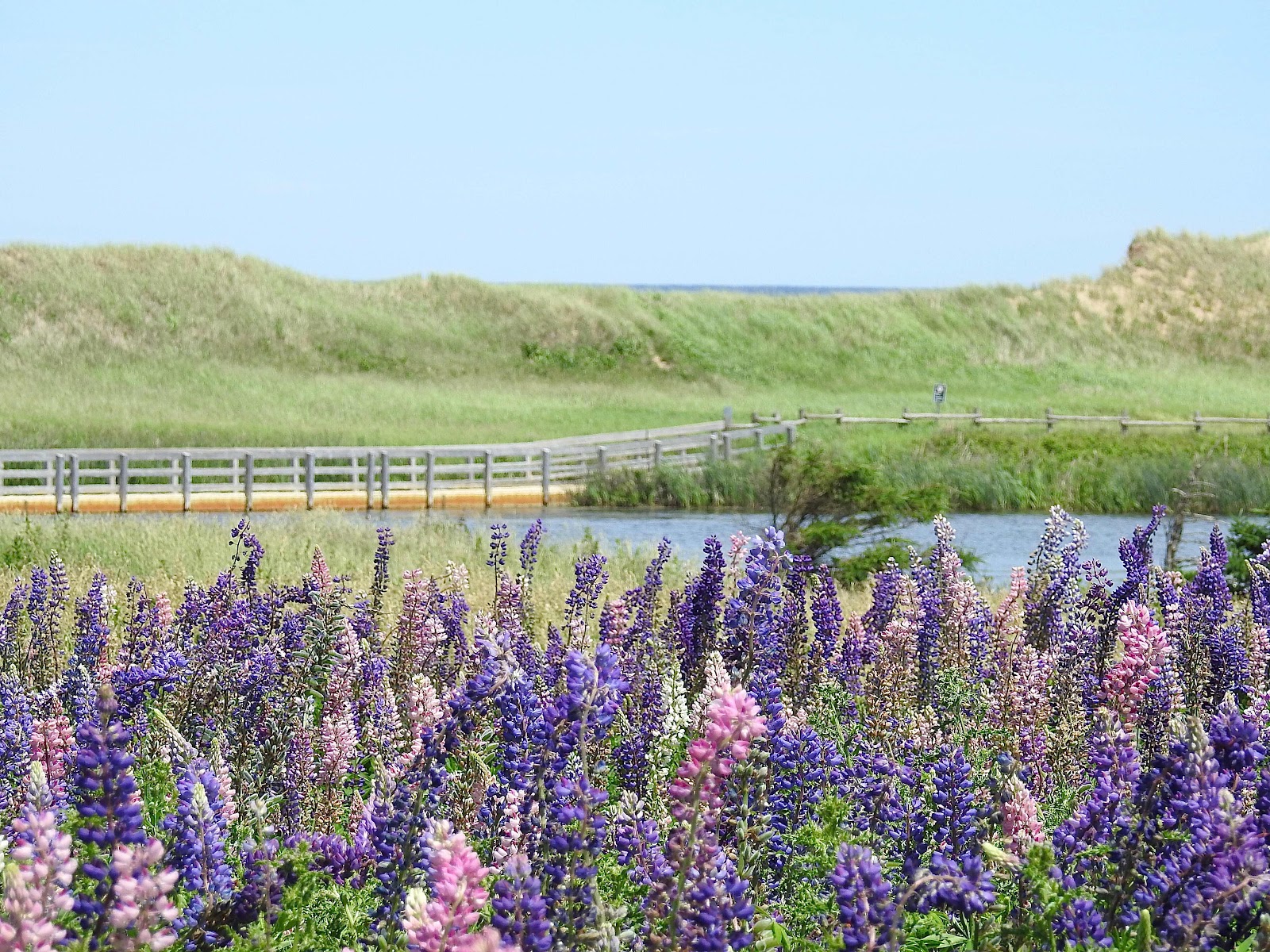 Meanwhile, we notice the sea arch at MacNeills Brook is widening. How long until a sea stack is formed? 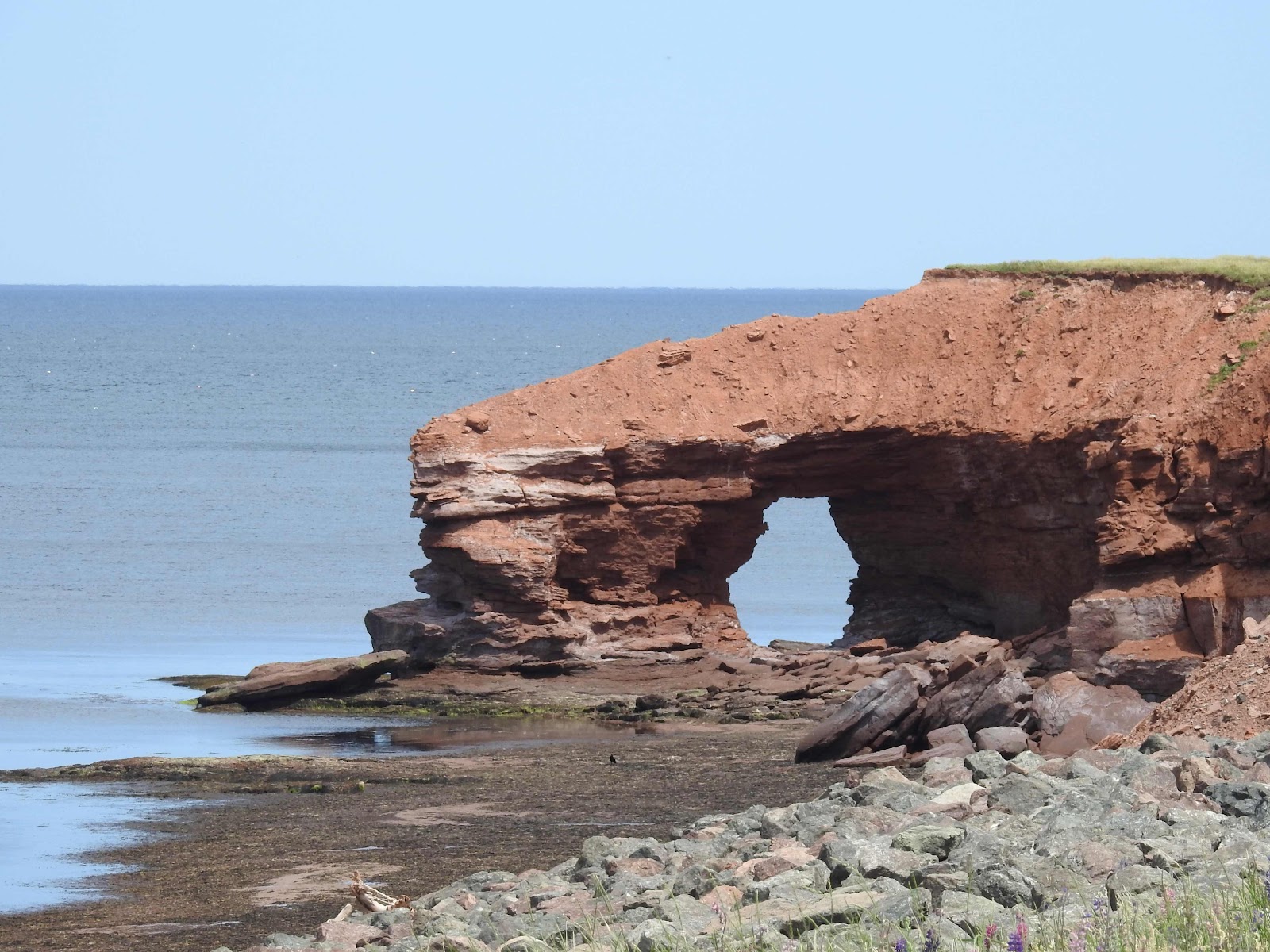 Geological succession is fascinating too.

So much to see in a relatively short distance.. The plant you call Giant Cow Parsnip looks very like what we know as Giant Hogweed, impressive but nasty stuff with a sap that can cause skin to blister.

John, hogweed is here too. Islanders are making a concerted effort to eliminate stands of it. I’ve learned how to distinguish hogweed from the parsnip so I can report any hogweed we see.

Each one is so gorgeous, I couldn't pick a favorite if I had to. You sure live in a beautiful area Marie!

Oh those lupins!!!! And the sea stacks! Amid all the beauty.

Pretty wildflowers, I love the lupins.
Lovely view of the arch!
Take care, enjoy your day!

I am endlessly grateful that you take us along on your fascinating and so often beautiful walks and rides. Many, many thanks.

What EC said. I love that wonderful lupine picture especially.

Being out there gives you n opportunity to see things.

As I scrolled down and read about the roses, I thought that, too. Did there used to be a homestead here. Here in the national park we say that whenever you see a patch of daffodils, there once was a house on that property.

Such nice photographs! Thank you for sharing. All the best.

Thanks for sharing these lovely scenes. I still think that wild flowers have a delicate beauty that far surpasses that of a cultivated flower.

Oyster boat is interesting
Coffee is on and stay safe

The lupins are gorgeous. Perfect shot. I was talking to my daughter today and she was telling me about the problem she had with her knee trying to bike ride. I was telling her about your ebikes. She told me to win her one in a contest! I should be so lucky but there actually are a decent number of ebike contests.

Gorgeous photos, and those lupins are spectacular :)

So much to see both on your walks and bike rides Marie I'm happy that we can take this virtual trip with you. The rose border is gorgeous, never enough roses in a garden, or anywhere 🌹

Thanks for these lovely views, Marie. Perhaps I will see some of them for myself in September!

I am not sure if I have seen Queen Anne’s Lace either. Maybe I haven't been in the right places.

No matter what the season, your verges are so pretty in contrast to our stark, weedy plants.
The lupins and daisy makes ones spirits soar.

this was enchanting virtual tour along with you dear Marie

i enjoyed each bit of it and thoroughly !

nature seems flourishing it's best in this part of season and to her fullest indeed .
it is hard to resist as views are so captivating!
thank you so much for the joy you share my friend!
blessings!

Such amazing photoes!( and I am really interested in your camera..Such wonderful clear shootings )

I like specially the one from Lake of Shining Waters, The lupins are beautiful!

You sure live in a wonderful place with much to see

Thank you for sharing from your part of the world

I have to admit, your posts make me wish I could still go biking.

Interesting about washing out the sand. Not an oyster fan, but fried clams are a favorite.