A day at the beach and Fiona update

It is one of the most picturesque areas of Prince Edward Island. We visit St. Peter’s Harbour at least once every year, often in September. Our recent visit on a sunny but cool day did not disappoint. 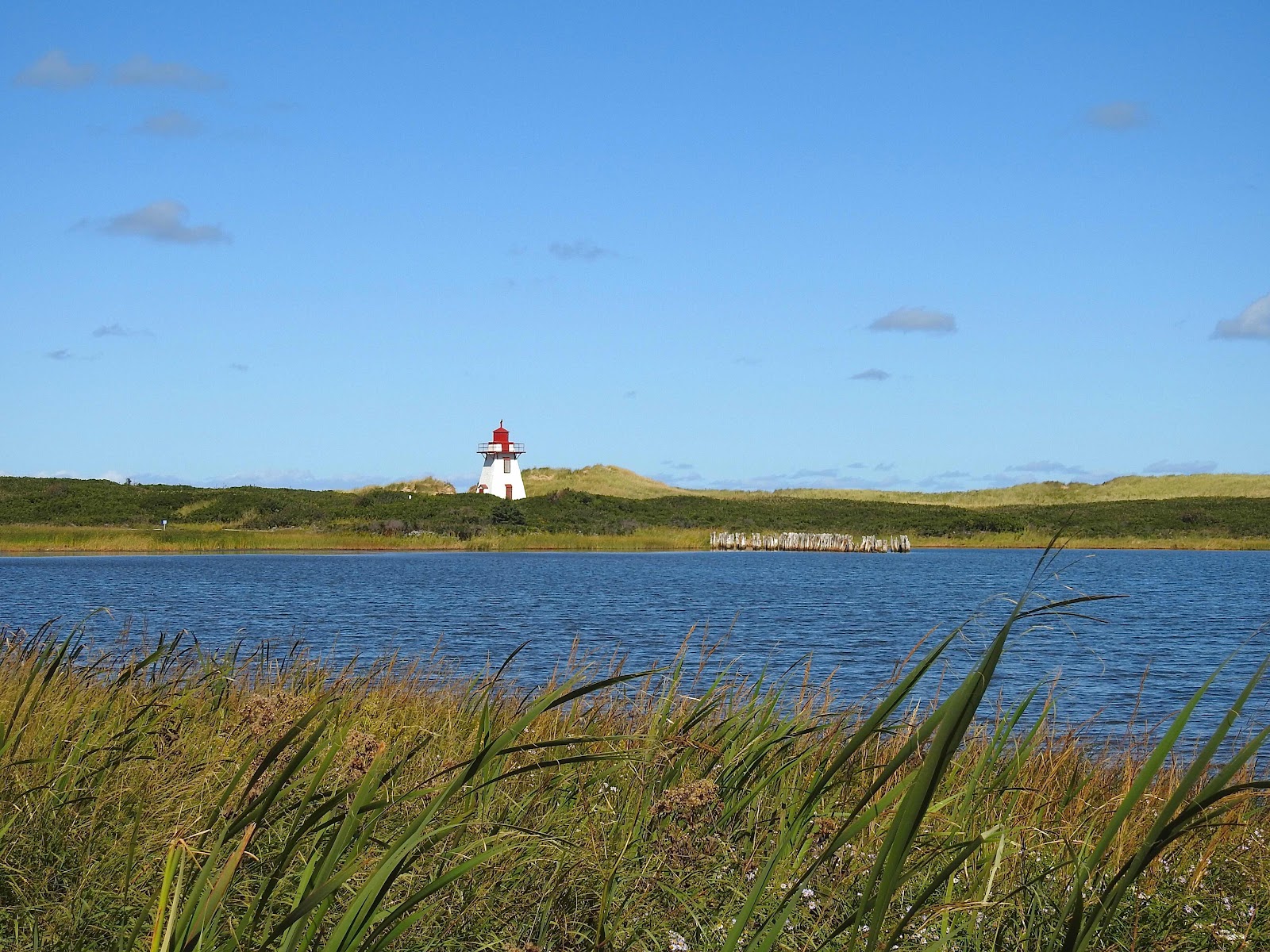 The lighthouse has been inactive 2008 and left to ruin until a local committee took on the tasks of repairs and maintenance. 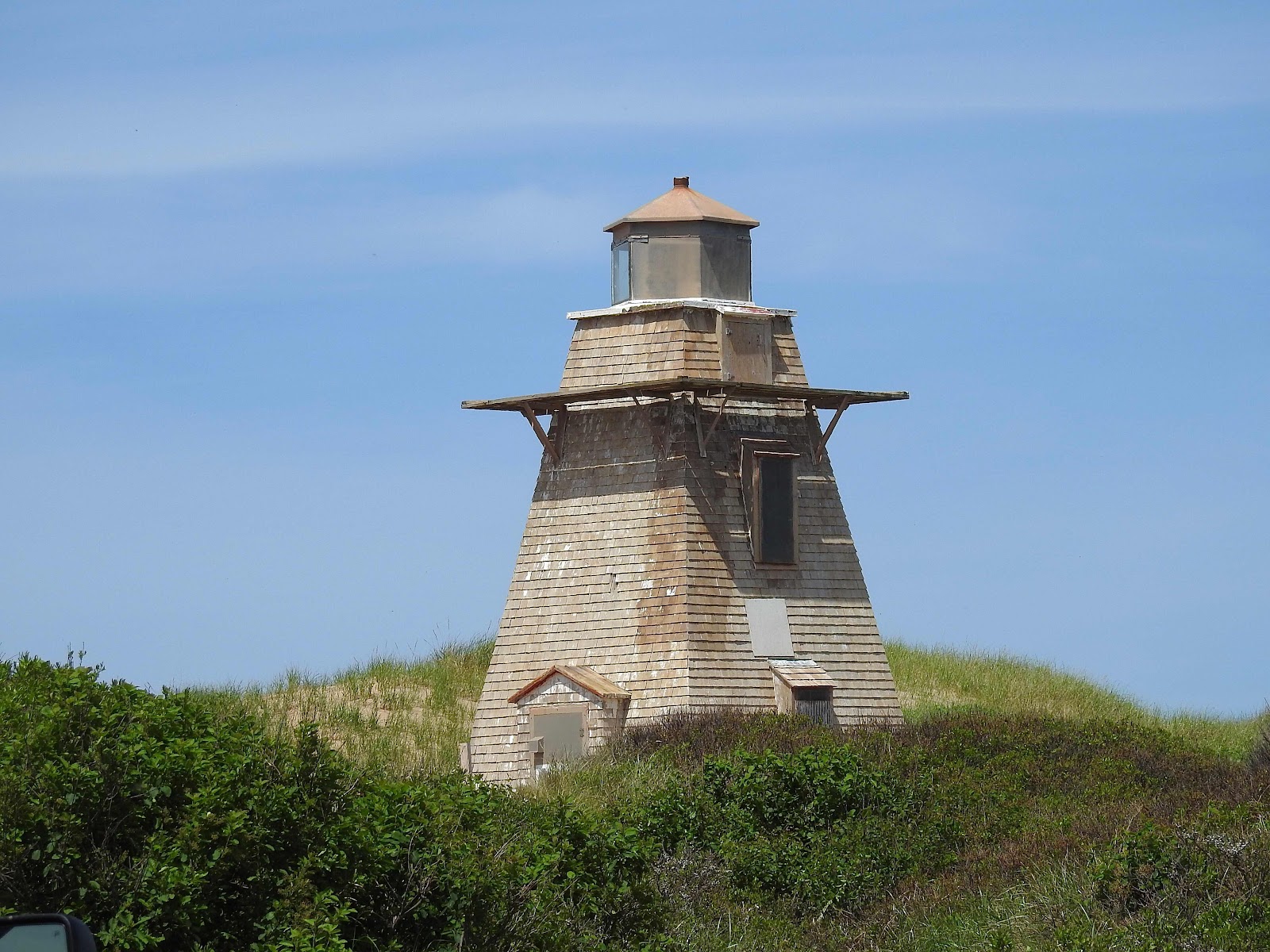 The small structure sits behind the sand dunes along the beach near the entrance to St. Peter’s Harbour. 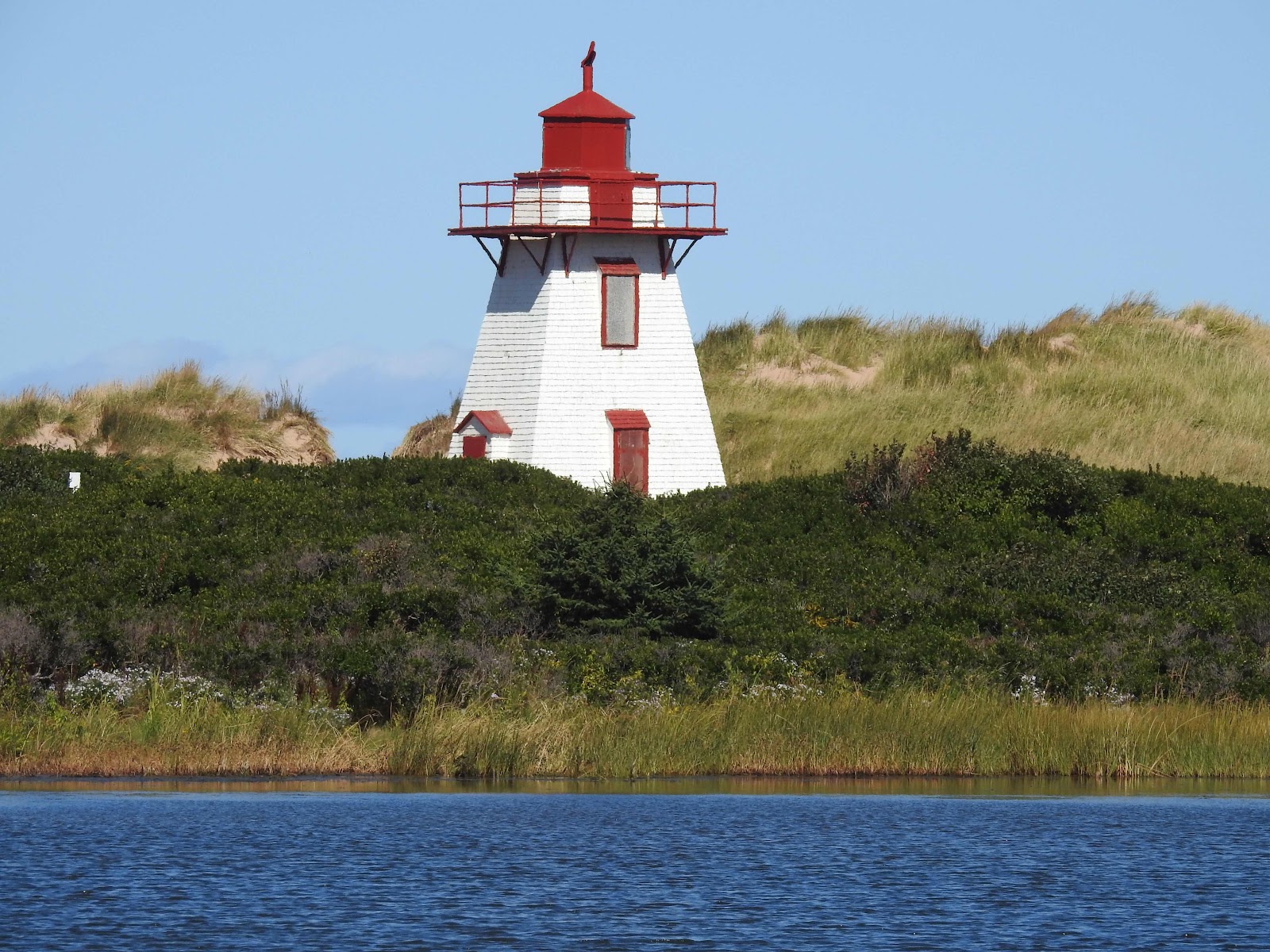 The well worn path through the dunes opens to the Gulf of St. Lawrence. 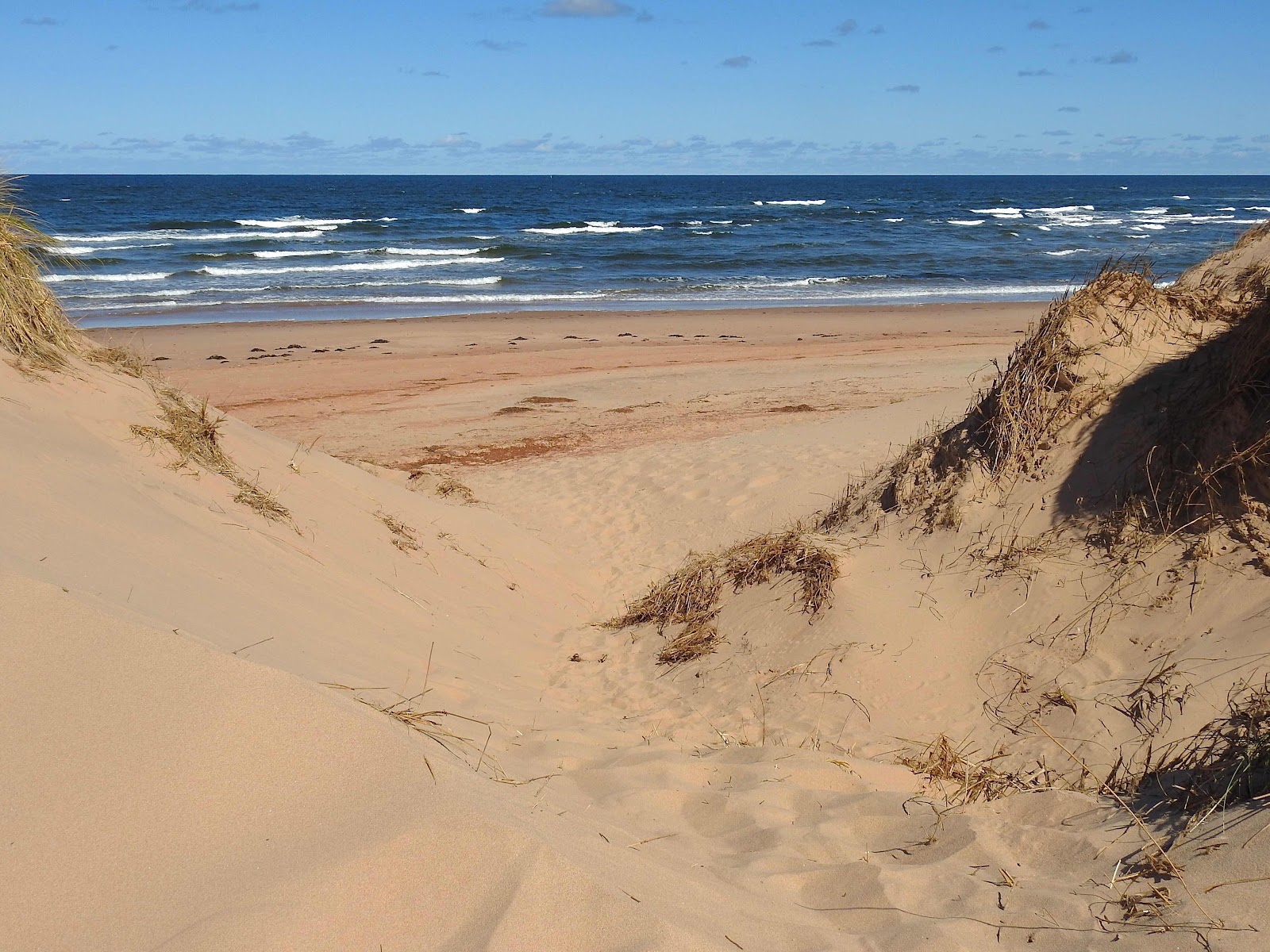 The beach stretches west and is strewn with seaweed, past some cottages behind the dunes. To the east the remnants of an old breakwater are well weathered at the entrance of the harbour. 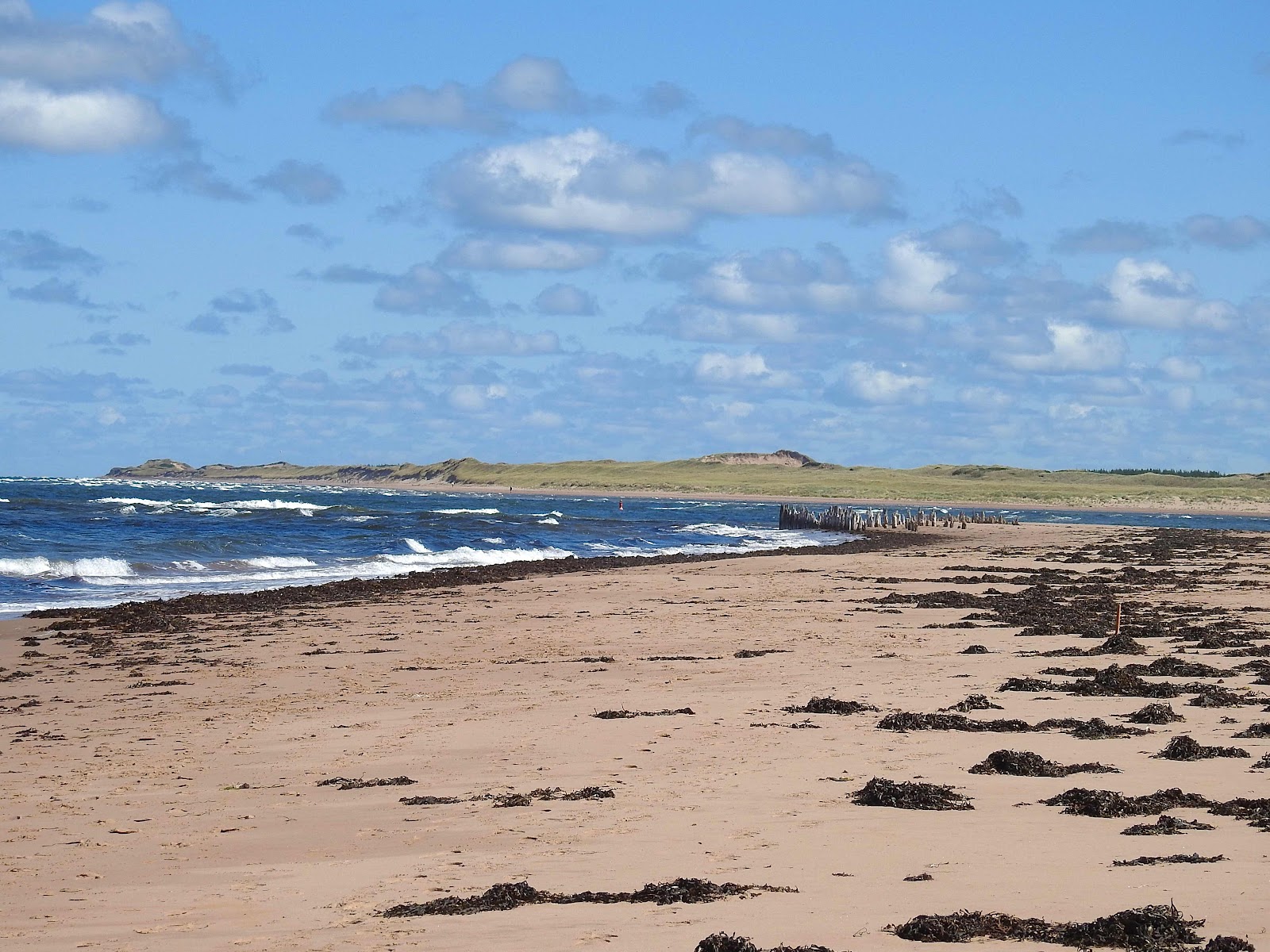 Across the channel, visitors at the Greenwich part of the National Park, enjoy a stroll on the beach too. 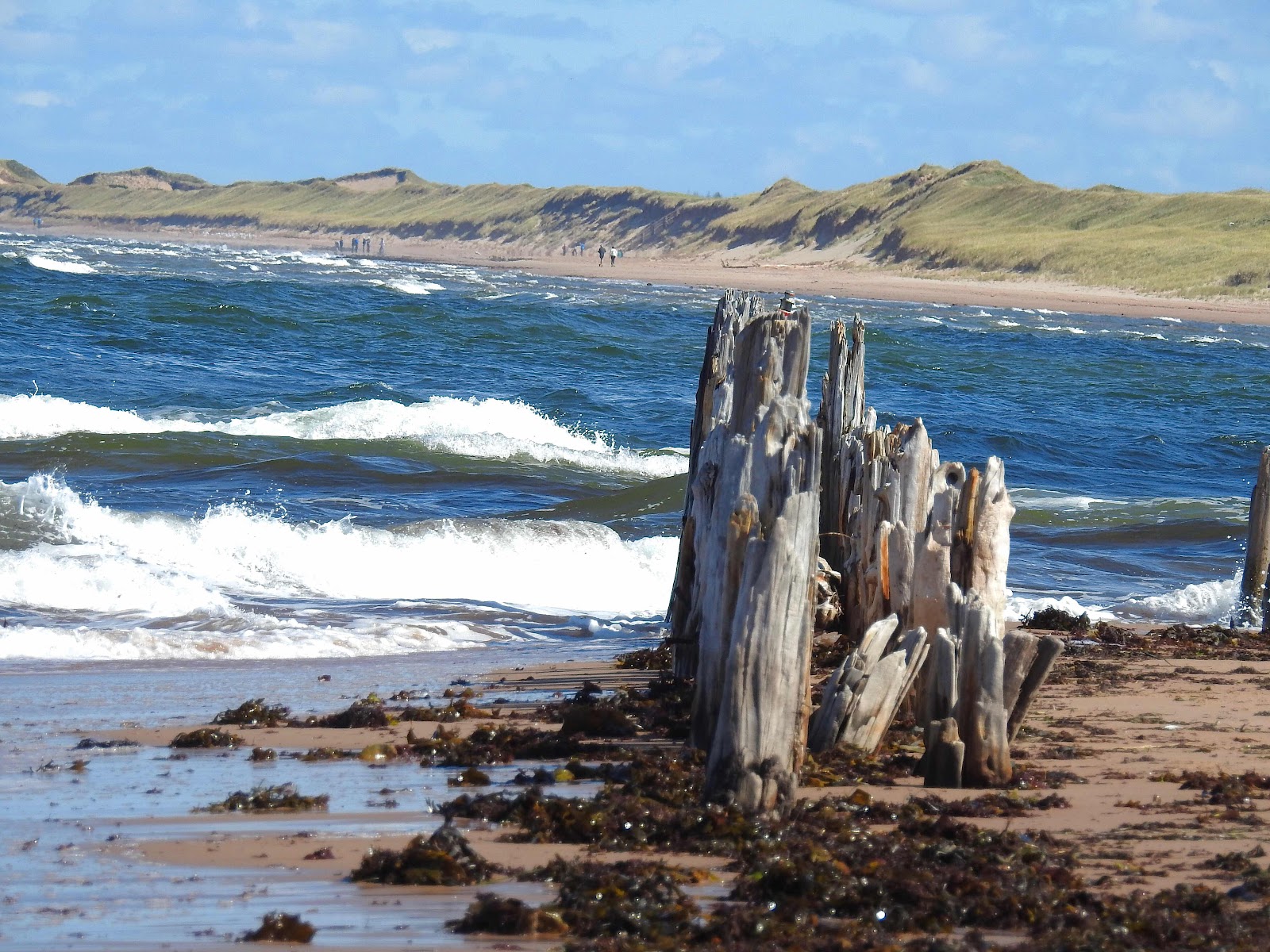 On the west side of the channel, the old pylons have taken years of relentless pounding much worse than today. 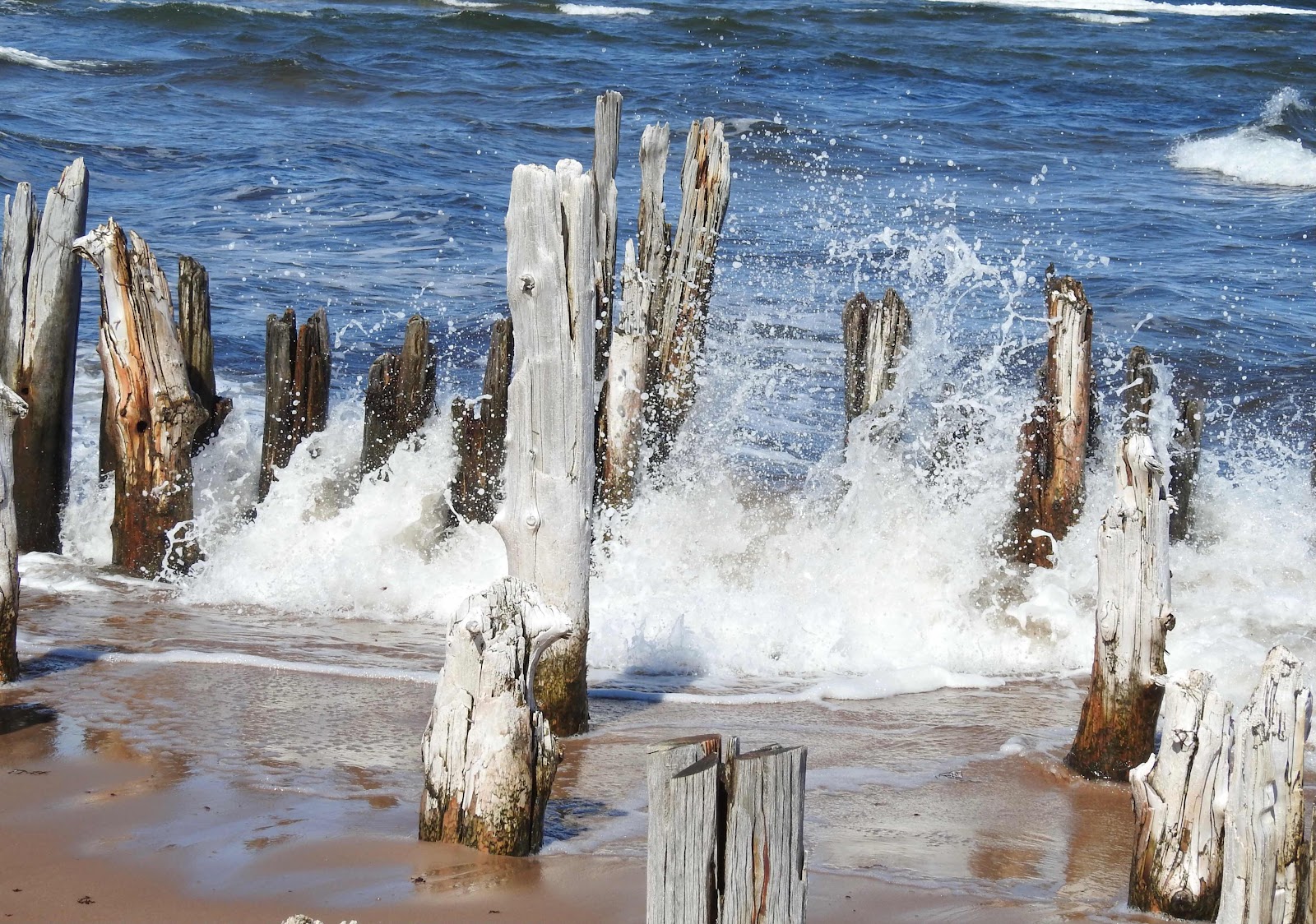 Meanwhile, along the shoreline, some of the last of the migrant shorebirds feed along the water’s edge. They walk quickly and appear to enjoy the company of a variety of birds. In the photo below, a Semipalmated Plover forages with some Sanderlings. 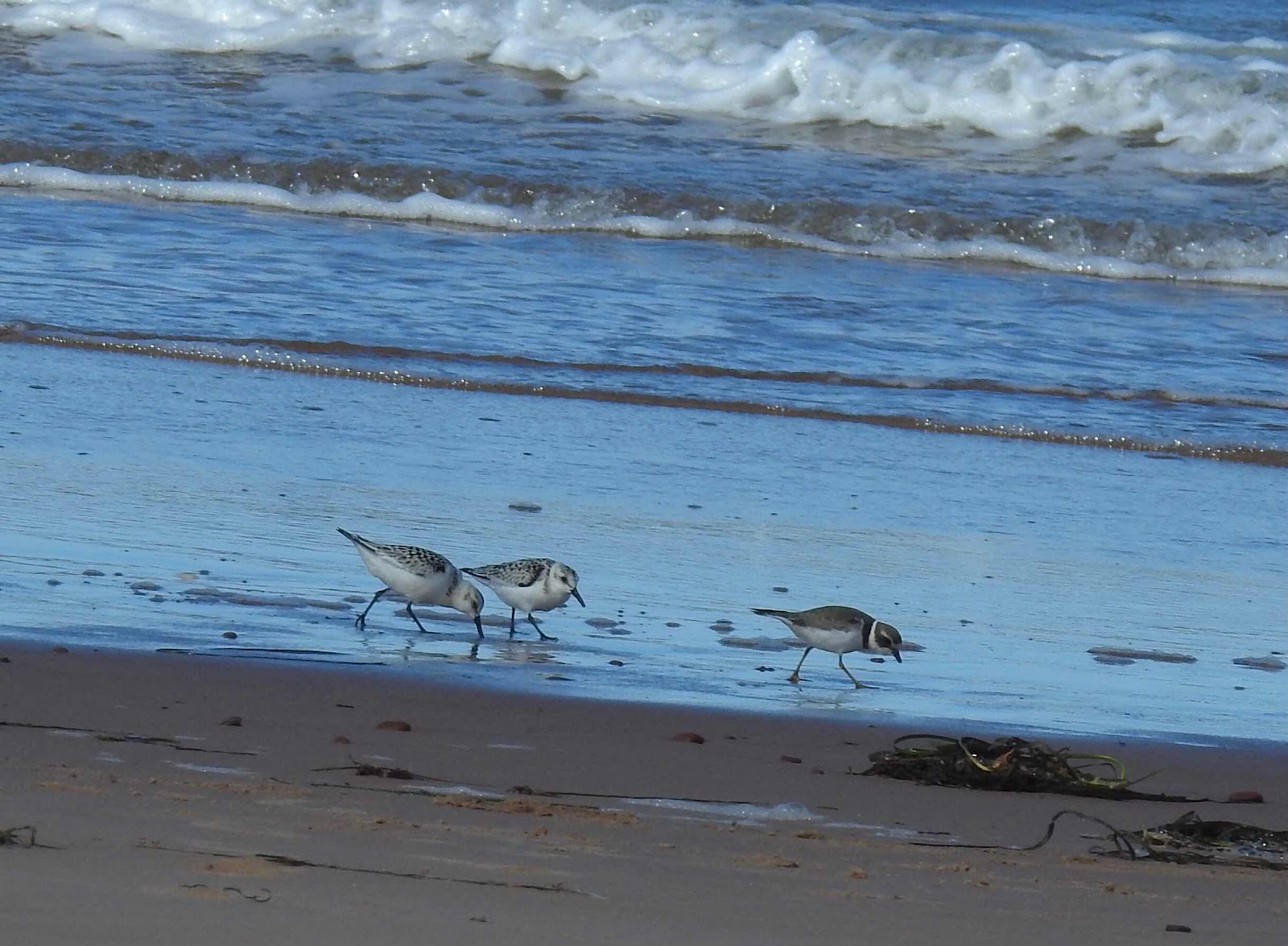 Nearby, footprints in the sand show just how busy the area has been. 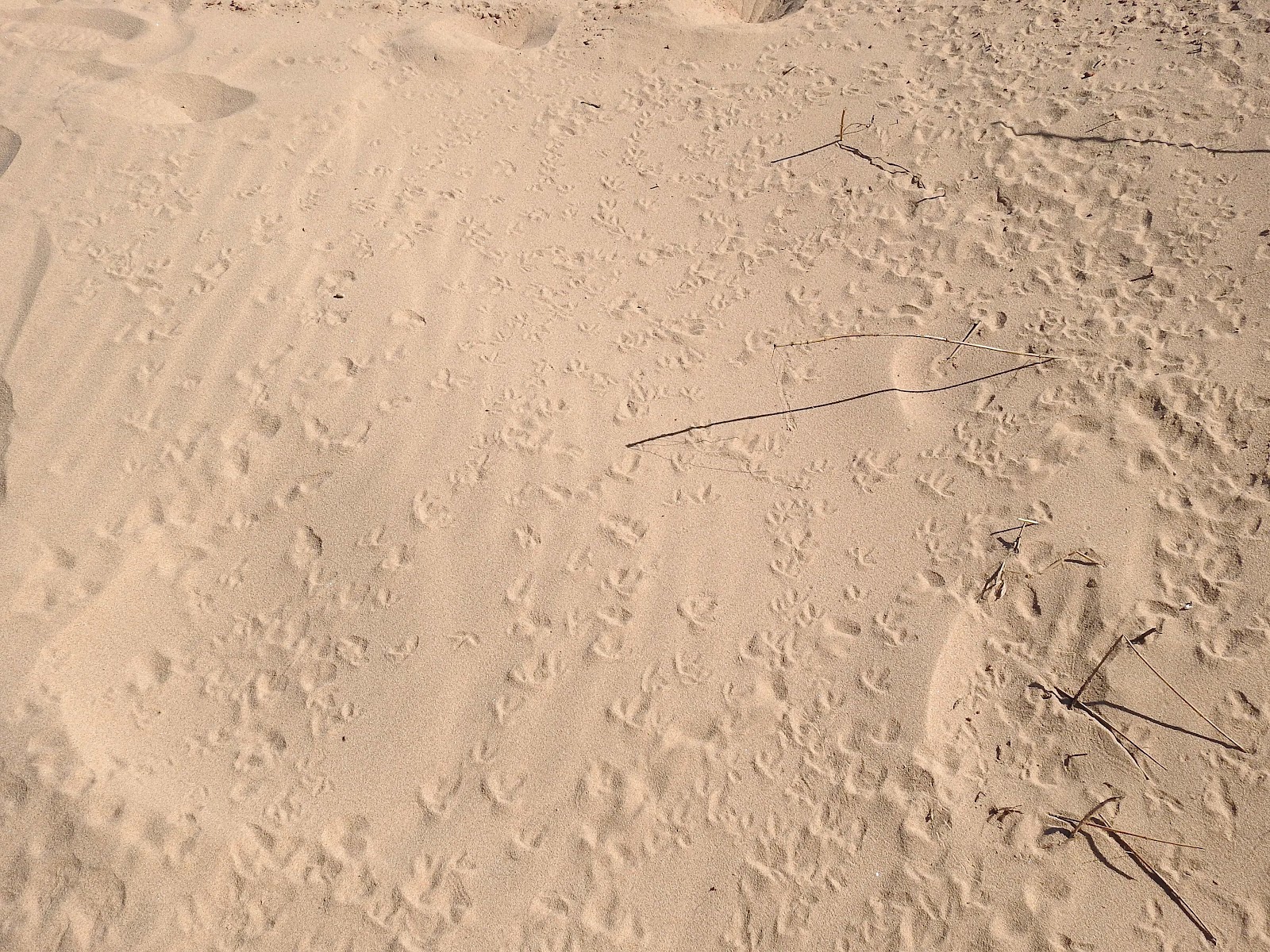 The sound of the ocean, the smell of salt air, and the sight of the breaking waves fill the senses.  As we head back to the car, crickets were chirping among the vegetation behind the dunes. A last look over the dunes will have to sustain us for another year. 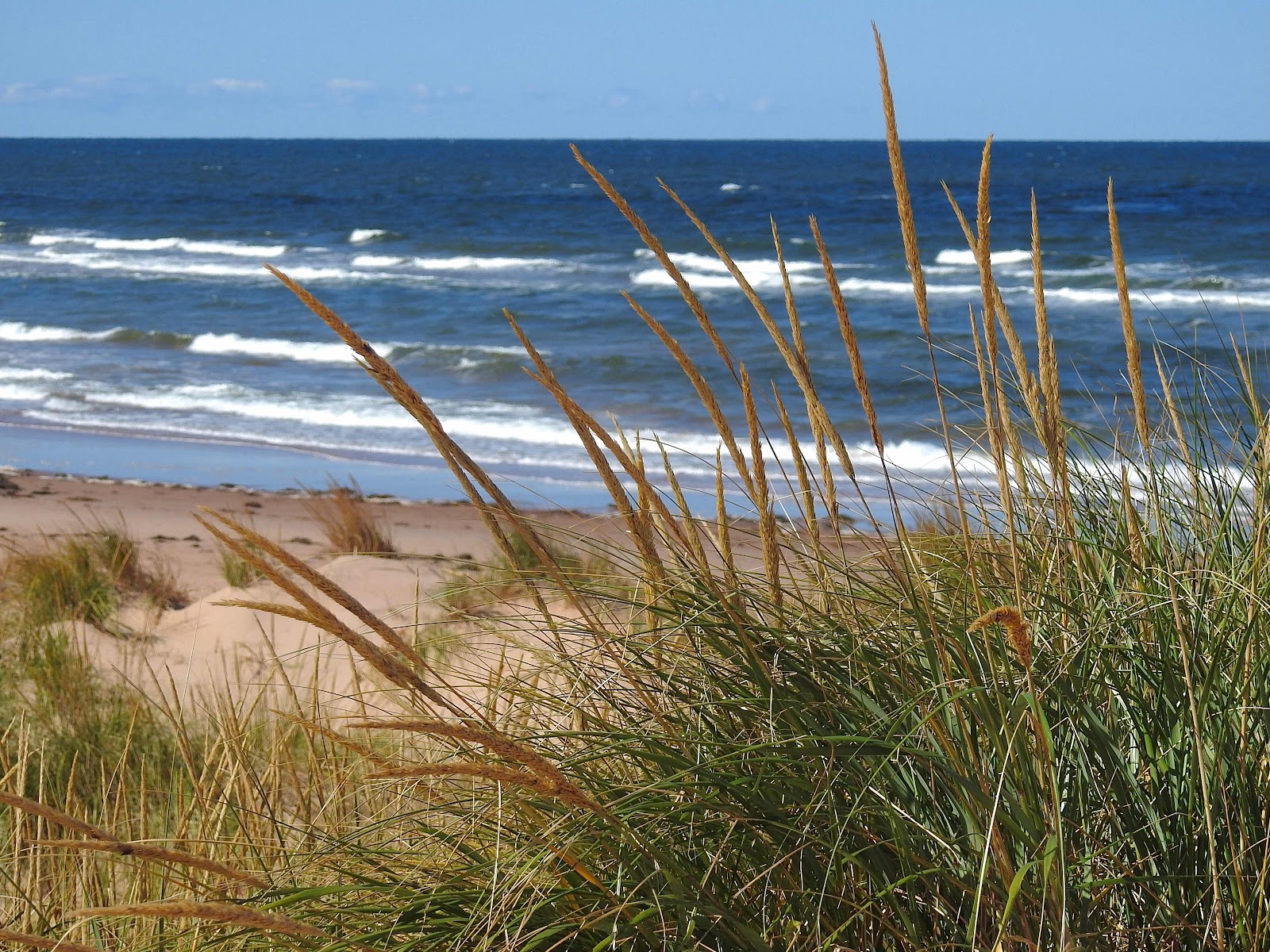 We have battened down the hatches prior to Hurricane Fiona tomorrow and Saturday. High winds and rain are expected, the amount of rain and wind speed uncertain as of yet. We are as ready as we can be!

Well, we are over part of what was the worst weather experience of our lives. The house shook and rattled but stayed in tact. The basement felt like the safest place but sleep was impossible.

When we lost power at 1:00 a.m., the wind was so high, we wouldn’t chance going to start the generator. Through the night, unbelievably, the power came back on for an hour and a half. It was somewhat reassuring. Later, after the power went off again, by mid morning, the storm eased somewhat and we started our generator.

The worse part of Fiona occurred in darkness, when the neighbourhood was pitch black. With the sounds of nature’s fury and the creaking and shaking of the house, it was difficult to distract oneself from the onslaught. Dawn’s arrival by 7 a.m. was welcome. Now we are waiting for Fiona to blow herself out!

Anxiety has been our foremost emotion this week and especially overnight. When we could check in with family and assess the damage, the anxiety lifted. Everyone is well and while our house came through with minor damage, our daughter has water leaking from the ceiling. We are fortunate though. Many others in Atlantic Canada fared much worse.

We will not soon forget Fiona.

Lighthouses are such an integral part of the shoreline topography of PEI and tourists and residents alike are drawn to them. And with good reason.

Those pylons are the definition of picturesque! I hope Fiona doesn't hit you too hard.

It looks like a picture-perfect place, even apart from the lighthouse.

Be safe in the teeth of the gale.

Light houses are cool and I had never been in one till I went to Calif and insisted on going to one. It was neat to see that folks lived in them and see how that was possible. Thanks for taking us on your walk.

Beautiful! I love the one with the waves crashing on the pylons.
Good luck with Fiona. Stay safe!!

Stay safe...Hurricane Fiona is raging...
I do love your beautiful walk on the beach. Pure Ocean Therapy.
Sue

Simply beautiful. Thank you.
I hope Fiona is gentler than predicted. Much gentler.

The beaches of PEI are amazing! We walked Greenwich Beach just after it became part of the NP, and had the beach all to ourselves. Hope you fare well over the next few days.

Those pictures are gorgeous! Some of them look like they should be postcards. I hope you're not getting too much damage from the hurricane.

I have a sister in law named Fiona.

I'm envious of your proximity to the ocean, but hearing that Fiona is heading your direction tempers that somewhat. Do take care, and stay safe!

I hope you remain safe during the upcoming weather.

Prayers for safety from the storm
Besutiful seashore. They've done a good job saving the lighthouse.

What a beautiful spot to visit. I hope the hurricane does not have too much impact on your lives. Stay safe, Mxx

Love the lighthouse! Hopefully the impact from the hurricane will not be too severe.

It is really a beautiful place to visit.
I was just listening to the news and thought of you.

Hello,
Take care, I hope your safe from the Hurricane Fiona. The views of the gulf and the beach are beautiful. What a lovely spot to visit. I like the cute lighthouses and the Plovers and Sanderlings. Take care, enjoy your weekend!

I just visited cape cod and saw an old lighthouse there. Your photos are so beautiful and interesting to learn about the lighthouse.

Definitely hoping for your safety in the upcoming storm. I've no doubt you're experienced with them, and know your drill. Do check in when you can.

An idyllic place!  And the pictures are beautiful. I hope the hurricane will weaken and all ends well.

Hello Marie, I have just been watching the news and saw the story about Fiona blowing right over PEI. I opened up Island Musings and so happy to hear you’ve made it through OK, at least, physically. I can only imagine the anxiety! Thank you so much for your update to this post, this morning, to let us know how you are doing. What a night! On a much lighter note, I sure enjoyed all your photos in this post, “A Day at the Beach.” I sure hope the remainder of your weekend goes much better! Kind regards to you and yours from Seattle! John

Wow, I'm so happy you came through it with only minor damage. That must have been very scary to be in pitch darkness while all hell was breaking loose outside.

Glad to hear you are all o.k. I was in PEI during Dorian in 2019 it wasn't fun and they say Fiona would be stronger. Friends in Morrel lost their shed to the Ocean and a number of trees down , otherwise safe. Love your blog , hopefully I will make it back there in 2023. Can't wait. Friends want me to move there. Barb

Saturday.... Just today learned of Fiona up there and thought of you, and it has already done its worst.

I am so happy that you did not suffer major damage or injury!!!!!!!

Hope your daughter's leak will be fixed soon.

Sooo sorry that you had to have this experience....

Glad you survived the night with little damage. Hope it blows itself out quickly. Good to hear from you.

You were on my mind all day long.
I am so glad the worse is gone... hopefully.

Thank you Marie, for the update
It is good to know y'all made it through. The news reports are frightening.

viewing your pictures of St. Peter’s Harbour made me feel as though i was walking the shoreline with you...what a beautiful place!!

your description of fiona was much like our superstorm sandy here. we lost power for 8 days but were lucky to have a generator and a home that took the beating. i hope fiona has passed and that you are safe. there is another storm coming that may impact us here. i must look at the weather reports.

i missed you too!!

i left a comment, and received an error message while posting. i hope it comes through!

Nature's beauty and fury! What a contrast. My heart goes out to all on your beautiful island, which will now show no resemblance to your idyllic day at St Peter's Harbour.
Very relieved to read here that you and yours came through unharmed. There were tears of relief this morning when I received a message from Kim's Dad, that our family were also safe.
Hugs!

Just read about the effects on Fiona in our headlines this morning and rushed over here to find out how you had fared. So glad all your family are ok it must be so devastating for so many. It sounds such a frightening experience especially in the dark when you can't see what is happening outside. Take care. Sarah x

I was so relieved when I saw you left a comment on my blog this morning. I came over here and saw the P.S. and am so glad to know you made it through safely. You are part of my virtual family and I feel a rush of gratitude for your quick response here. Sending hugs and looking forward to pictures of the aftermath.

Glad to read that you survived Fiona and didn't suffer lots of damage. When I read about where the storm was heading, I was thinking about you. What a frightening experience.

OMG. I was wondering if it would pass by you. I knew this fall would be a bad hurricane season because the water has been so warm. That's my scientific opinion anyway. Glad you are safe and hope the winds move through quickly. The fast-moving hurricanes strike and move on. The slow-moving hurricanes hang over and cause all the flooding. I'm planning my move the first part of October and just keeping my fingers crossed.

Good to hear you fared well in the storm.
Lovely pictures.. especially the red and white lighthouse.

I can imagine the sigh of relief when it was over and everyone survived.

how scary. i remember my SIL saying years ago that when a cyclone came over their place it sounded like jet engines hanging over them. terrifying.