The bully in the marsh

Over the last several years, I have come to enjoy bird watching. The variety of niches they inhabit, colour, patterns and song I find fascinating. To sit on a rock by the bay and quietly blend into the environment so the shorebirds land there is exciting yet calming to my spirit. This time of year, with the shorebirds gone south, American Black Ducks in the salt marsh are interesting to watch. 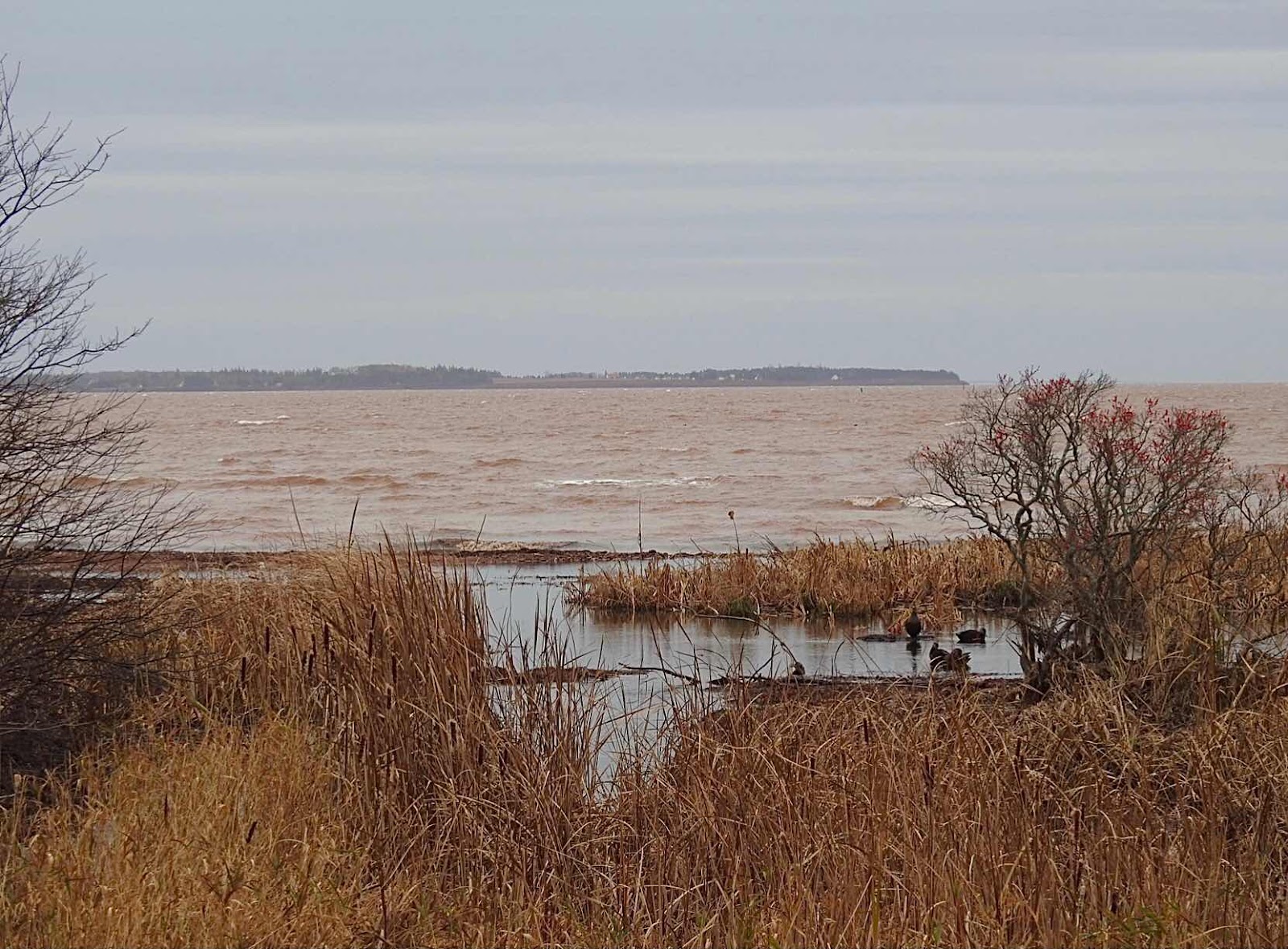 Much of the time these birds look like they are smiling. 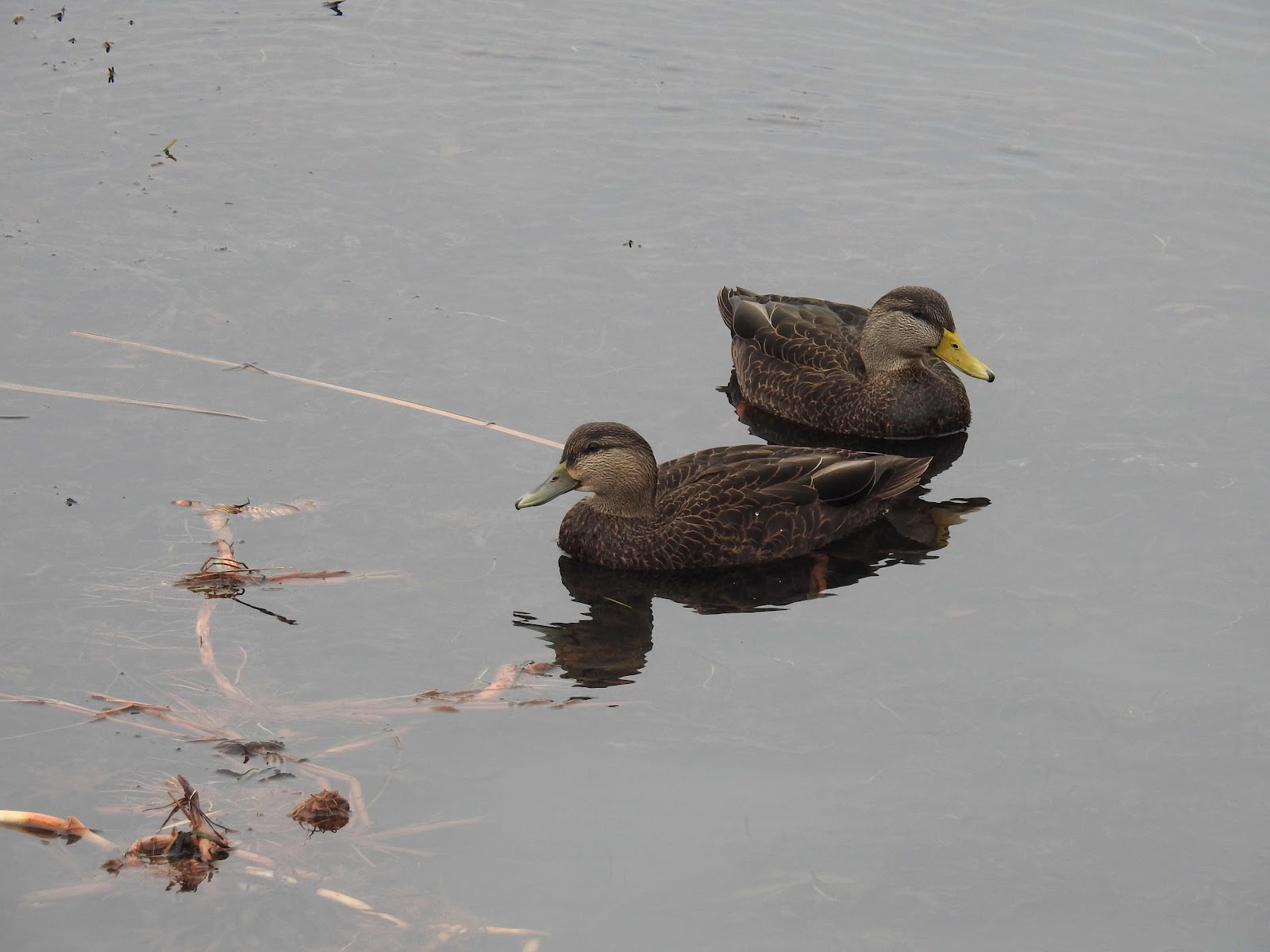 However, recently none of the birds had reason to smile since a bully was ruling the roost, or rather…marsh. One day we watched, the same male chased several birds across the water in the marsh, making an aggressive quacking sound as he went. 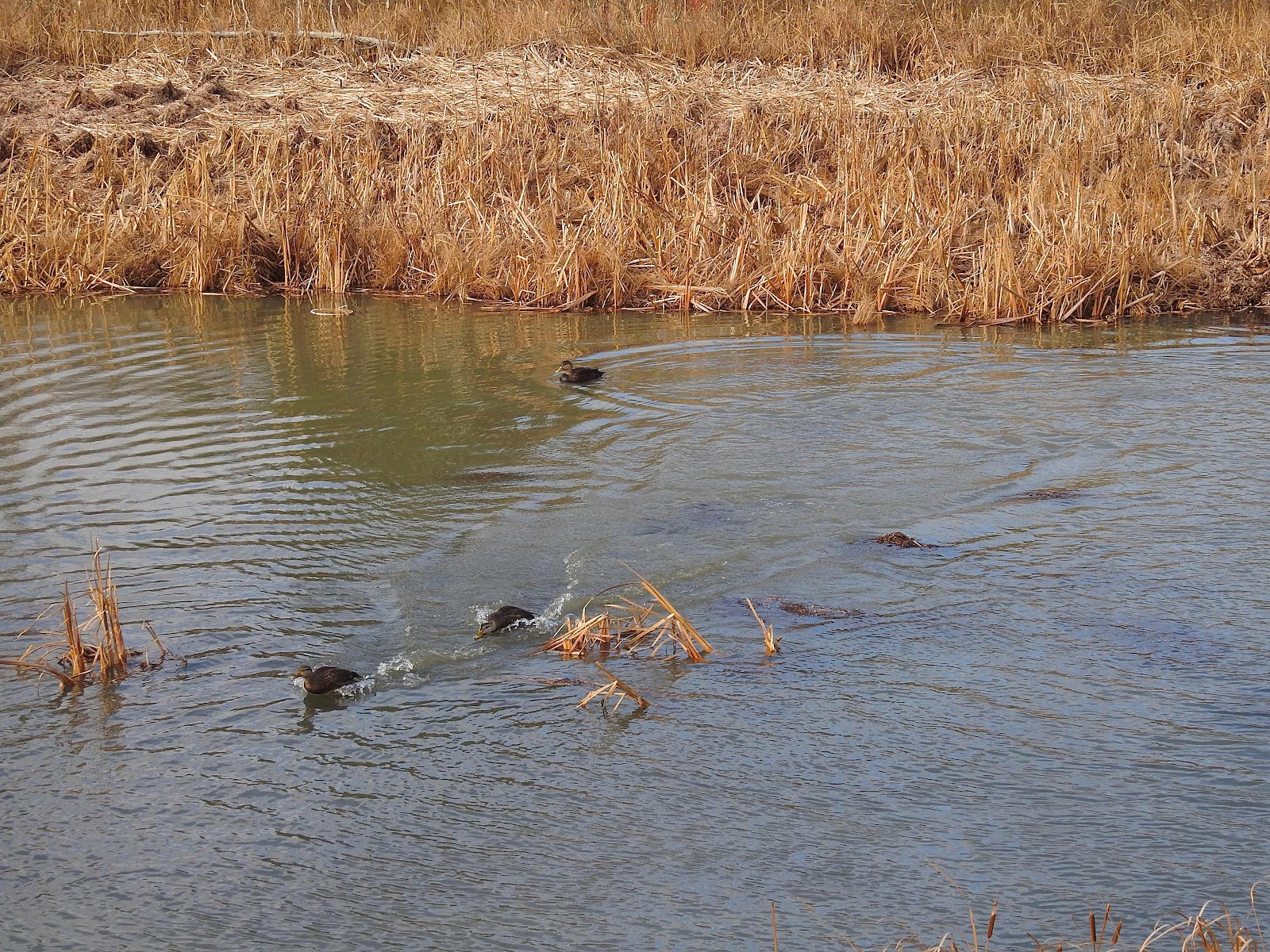 The speed with which the birds could scuttle across the water almost made flight unnecessary. 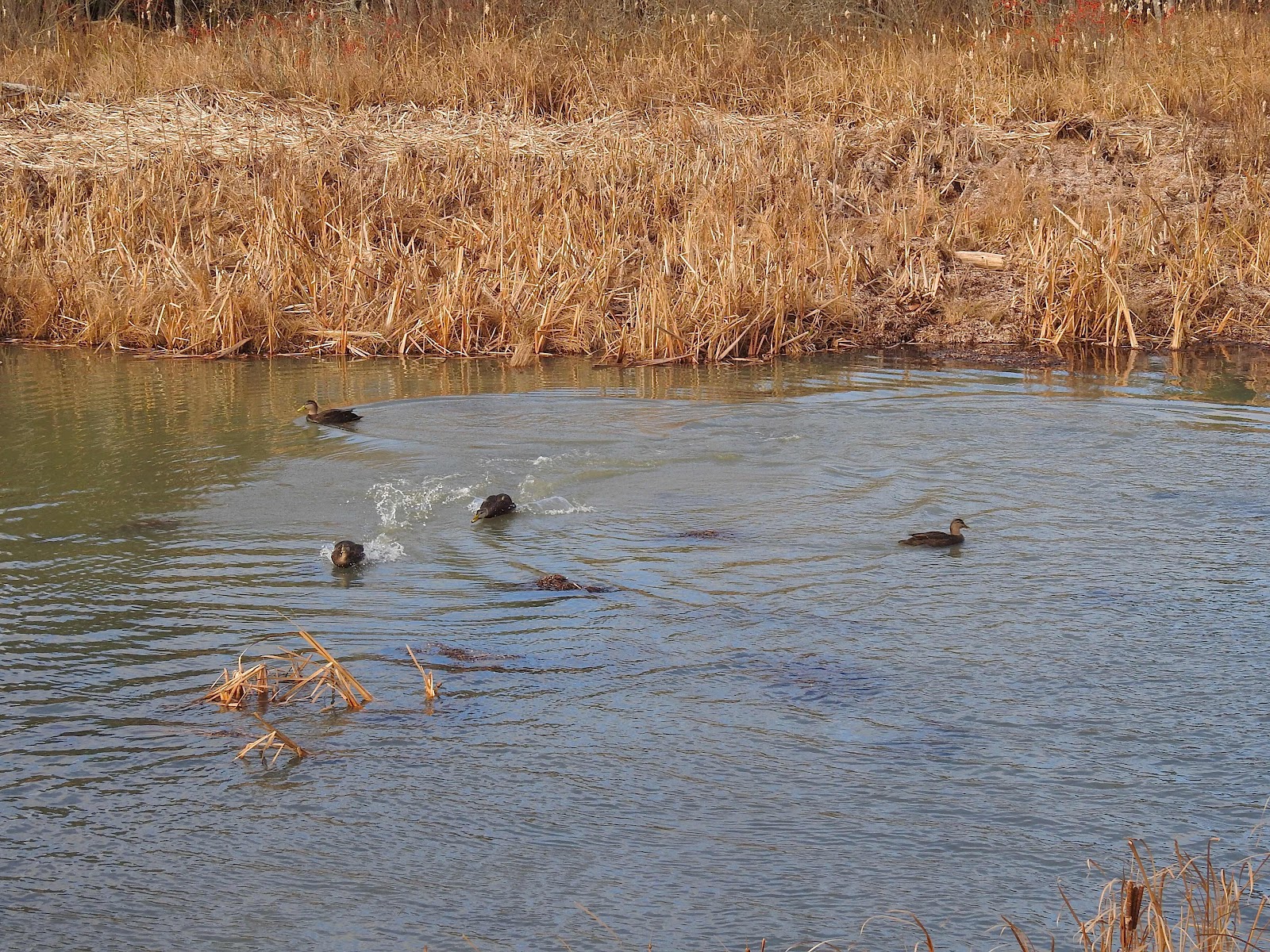 However, most of the pursued birds eventually took to wing and the bully did too. Both quickly returned to the water though. 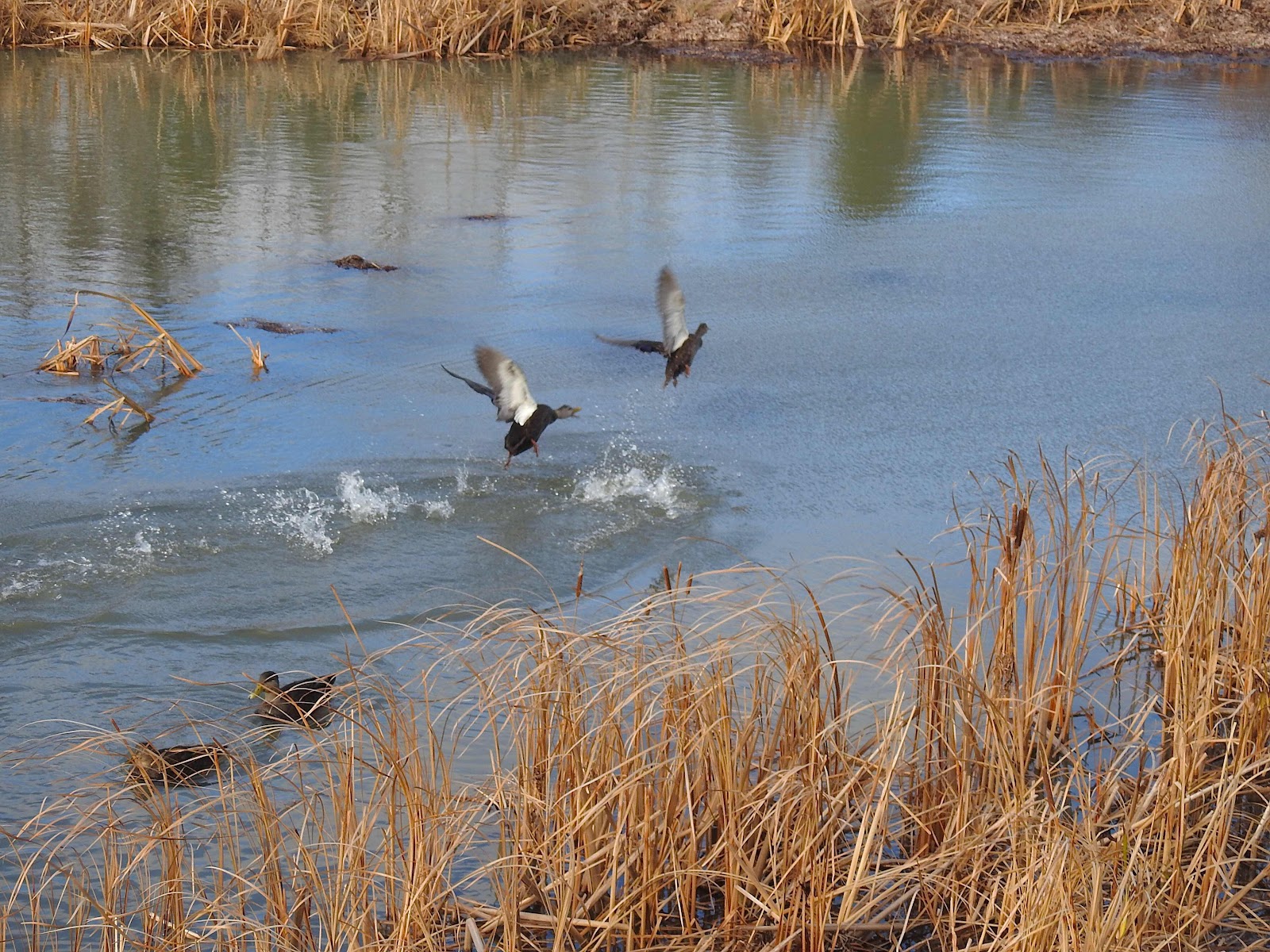 He pursued one bird into the bulrushes where it stayed for a few minutes. 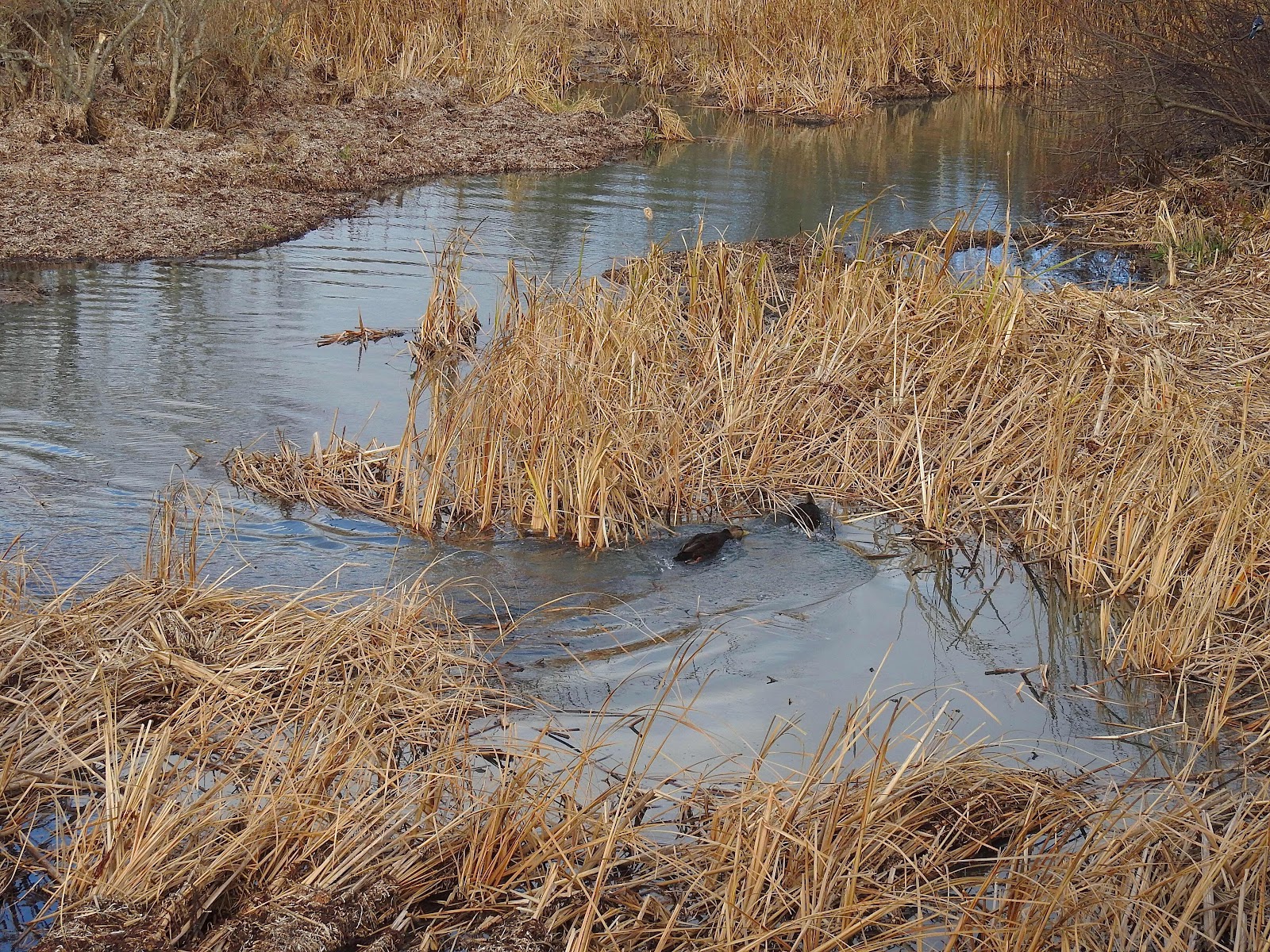 Others decided to hang out amid the bulrushes and eventually the bully left them alone. 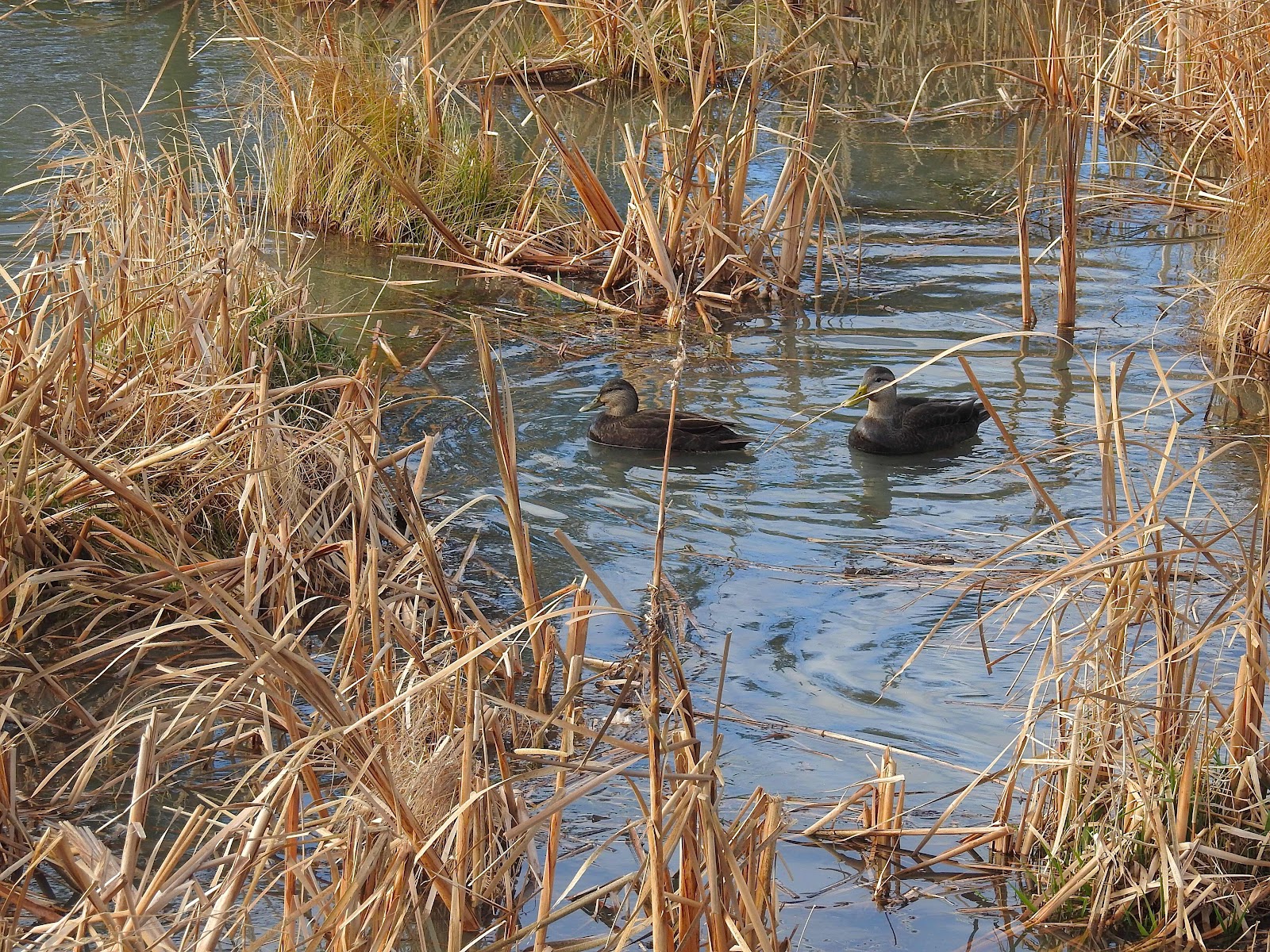 Meanwhile two birds were oblivious to the bully’s antics. They kept their heads in the marsh and left the other to his vices. He ignored them. 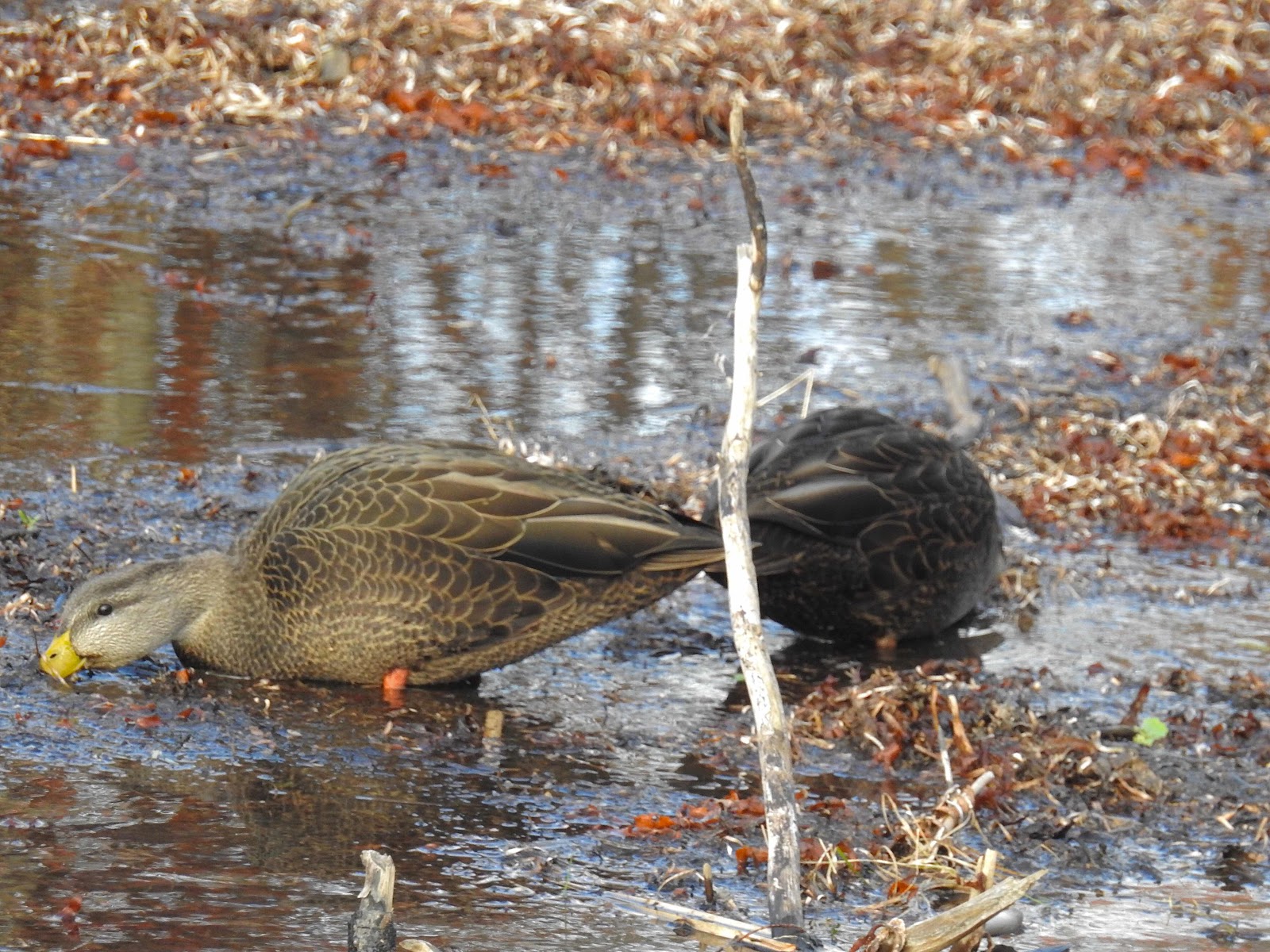 The next day, it was quieter in the marsh when we visited. 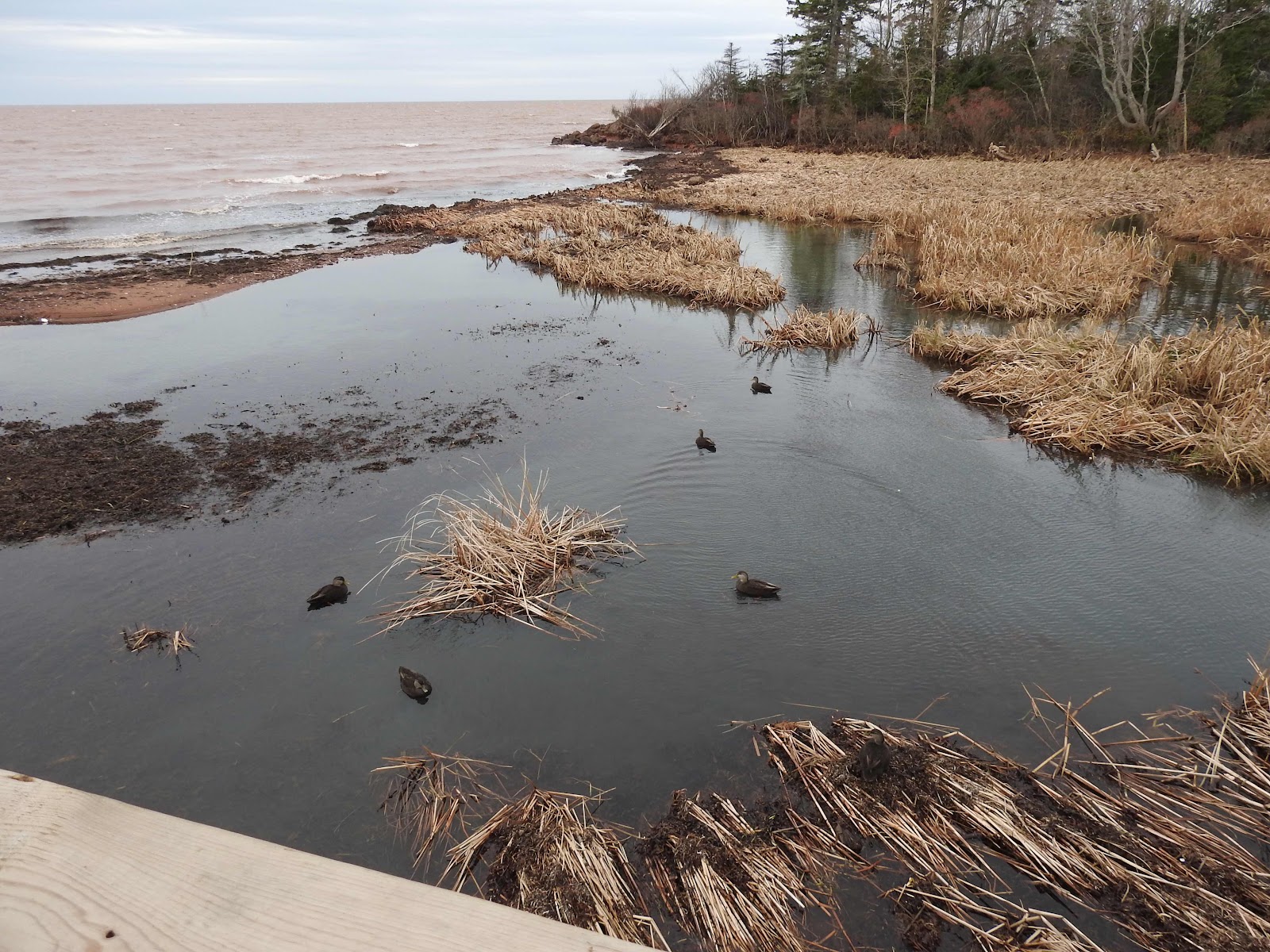 However more recently, on a day when the marsh was flooded by gale force winds at high tide, one of the ducks, again a male, wasn’t playing nicely! 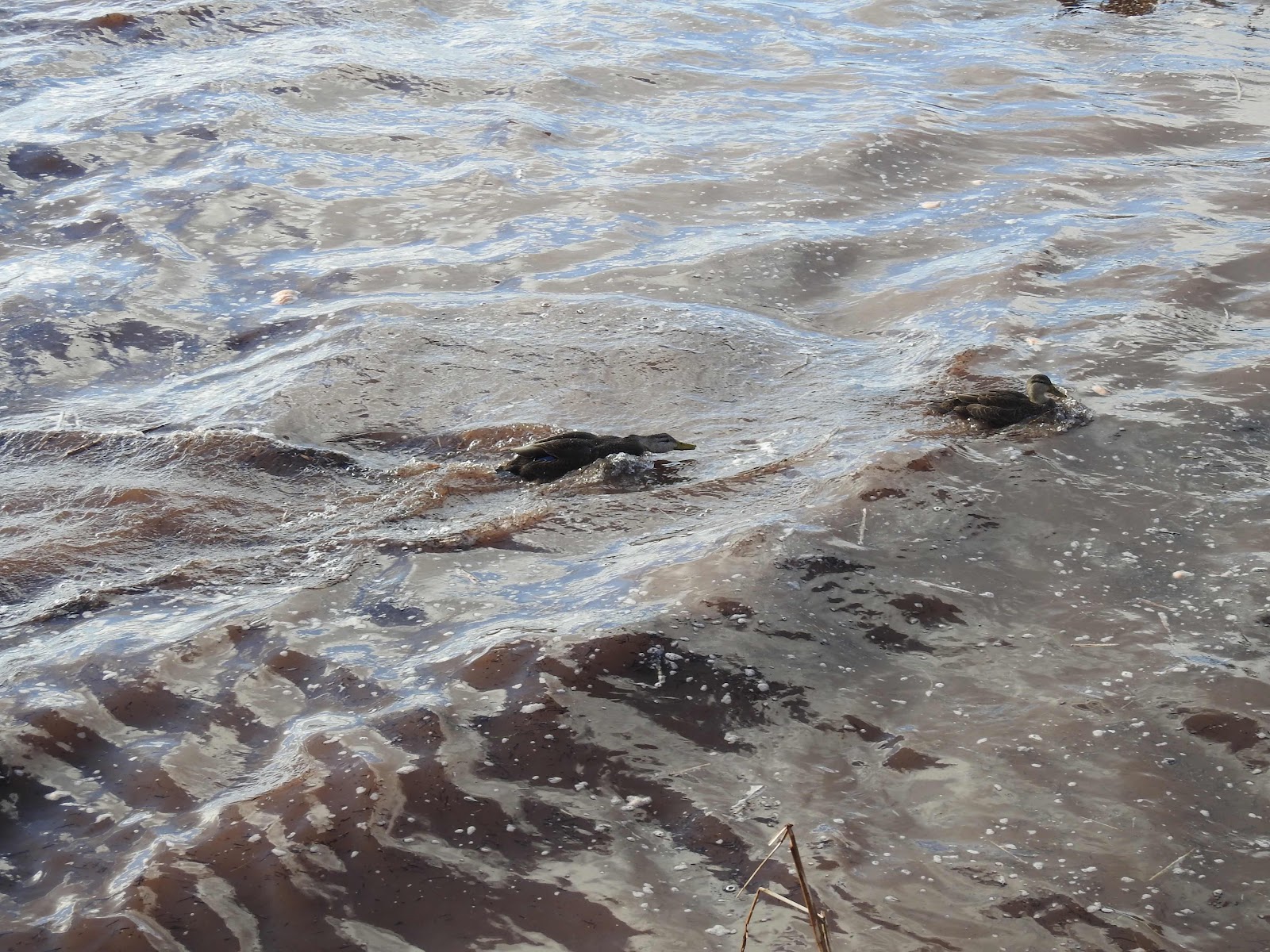 We always wonder, as we approach the gazebo, what the ducks are doing that day. As the marsh and later the bay freeze, the ducks will disappear from the area until spring break-up. Open water at the head of the bay will be their home for a few months. Meanwhile, we will enjoy their presence in the ever changing salt marsh.

Thank you for taking me on a wonderful visit to the marsh. I recently watched "where the crawdads sing" and loved seeing the wildlife. You get to enjoy it all the time, and boo to that bully!

What a beautiful bird! I had never seen a Black Duck until we came to PEI. Or at least I don't think I had, it is so hard for me to tell them apart from hen Mallards. It is weird that he is acting that way in the winter, that seems like mating season behavior.

Hello,
Love the ducks and photos. The bully must be aggravating to the other ducks there. Maybe he is chasing away rivals. Take care, enjoy your day!

We see the American black duck here too in the summer. I honestly had no idea how many varieties of ducks there were until I started walking around the pond.

One wonders what gets into these aggressive ducks (more often Canada geese here). Are they looking for a mate or chasing another duck away from their mate. The feeders who ignored him had the right idea.

Lovely photos of duck watching.
A drake duck with an attitude makes me wonder what he's scream quacking to the others.

There are always bullies around, fighting for food or territory.

I love your first photo. What a mood!
We have turkeys that jostle for pecking order, blue jays, ditto. The bird world is, um, intense at times.

Bird watching is addictive isn't it? And yes, pecking order is NOT an empty phrase.

That is what I love about Nature - nothing ever stays the same and there is always something new to watch, even if it is a bully! :)

Patience pays off and you see much more. I'm too impatient and have to keep moving.

I wonder if the bullies are young birds.

So glad the windy weather didn't keep you inside. One feels very helpless watching the bully. Our Noisy Miners chase other birds constantly, big or small, and often reinforcements of the same specie arrive to help.

It makes me wonder at times when I see a bird bent on domination whether it is overburdened with a surfeit of aggression hormones. There is normal territorial dominance but sometimes it does seem to be pushed to excess. One does not wish to be judgemental, or wish ill on others, but if a Bald Eagle is cruising by and looking for lunch......just sayin'.

It must be a very rightwing sort of duck rather than a more pacifist leftwinger. 😁

We love watching the shore birds, but they are so shy most times.

The color of the water in your first picture and in one of the other - is quite interesting. It's not one of the usual blue/grey shades but resembles the
color of surrounding vegetation.

Wonder if it's mating season or he is just plain irritable and a bully.
It at least gave you some fun things to watch.
Love the marsh but it looks so cold..winter is coming for sure.
Sue

Hi Marie, I just enjoyed looking over this post and the earlier one, Exploring the Southwest Shore. The thing I love about your posts is the way things catch your eye and I end up saying, I would have snapped that too. 😊 It’s just uncanny. The bully duck chasing the others … the tiny lighthouse … the three sentinels, two drying their wings … the sea stack … the pond full of Canada Geese … it goes on and on. Thank you so much for sharing your photography and for your kind comments on my blog. Best wishes to you and family. John

I find it way cool how birds take off in water.
Coffee is on and stay safe

I enjoy birdwatching too. It is interesting how in in the bird community there are bullies. Very fascinating.

Great photos!
Hope you are having a wonderful weekend!

That would be very sad for me when the ducks left. Of course, you've developed an eye for all the critters around the areas you visit. Just keep those pictures/stories coming.

They are lovely birds.

I have never noticed before but you are right: they do like as if they're smiling.

What a mean bully! Perhaps he was mistreated a a duckling.

I enjoyed your story told in pictures. You had the characters and the settings and action by the bully. A true photographic essay. I love it.

Beautiful description of a marsh life! And the bullies are always around...

Exquisitely captured!
I truly enjoy your perspective and the way you photograph these special moments dear Marie :)
Loved the images. Uplifting!