Southwest to the Cape

Autumn is a dual season with weather reminiscent of summer with that which heralds the beginning of winter. Before that change this autumn, our last day exploring the southwest shore of Prince Edward Island was a lovely adventure on a beautiful day.

We drove along Route 14 towards Skinners Pond and spotted birds in a pond by the road. Of course we had to stop but it was a bad location for parking. We pulled in up the road and walked back to see them but of course the birds flew further up the pond. 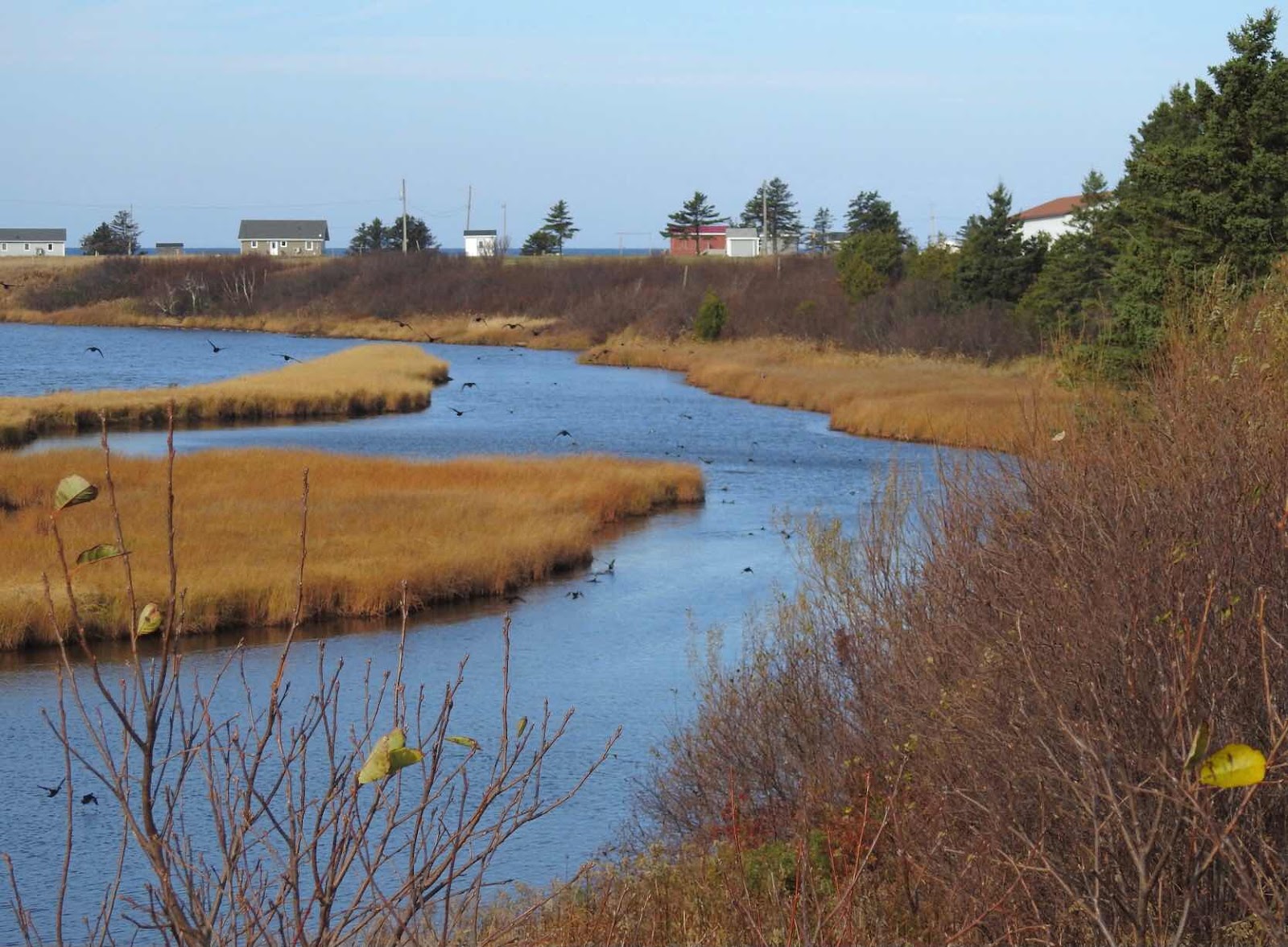 This pond was a wonderful find with the Hooded Mergansers 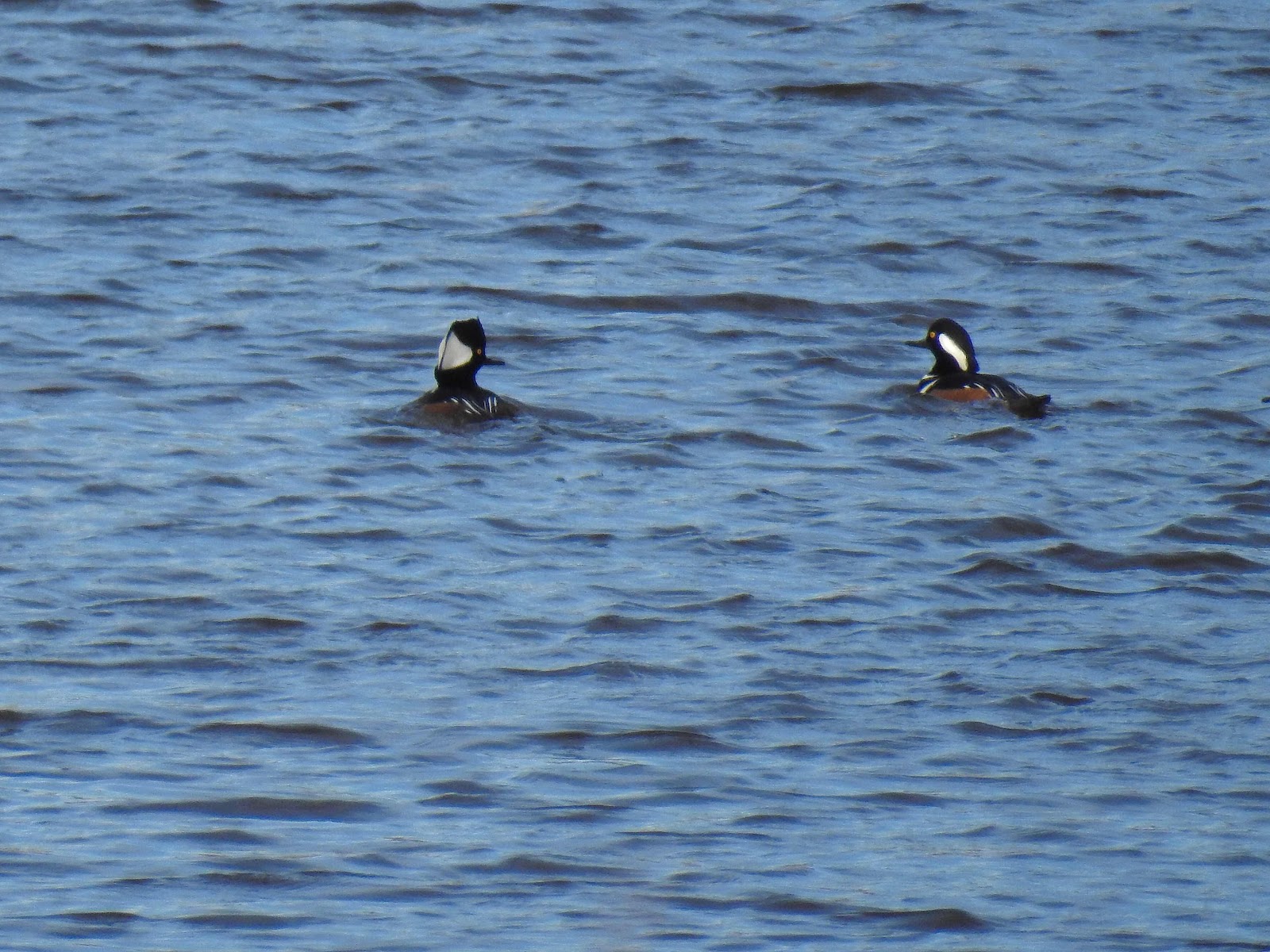 and the American Wigeons in the foreground of this photo, neither of which I had seen before. The American Black Ducks are always an interesting find. 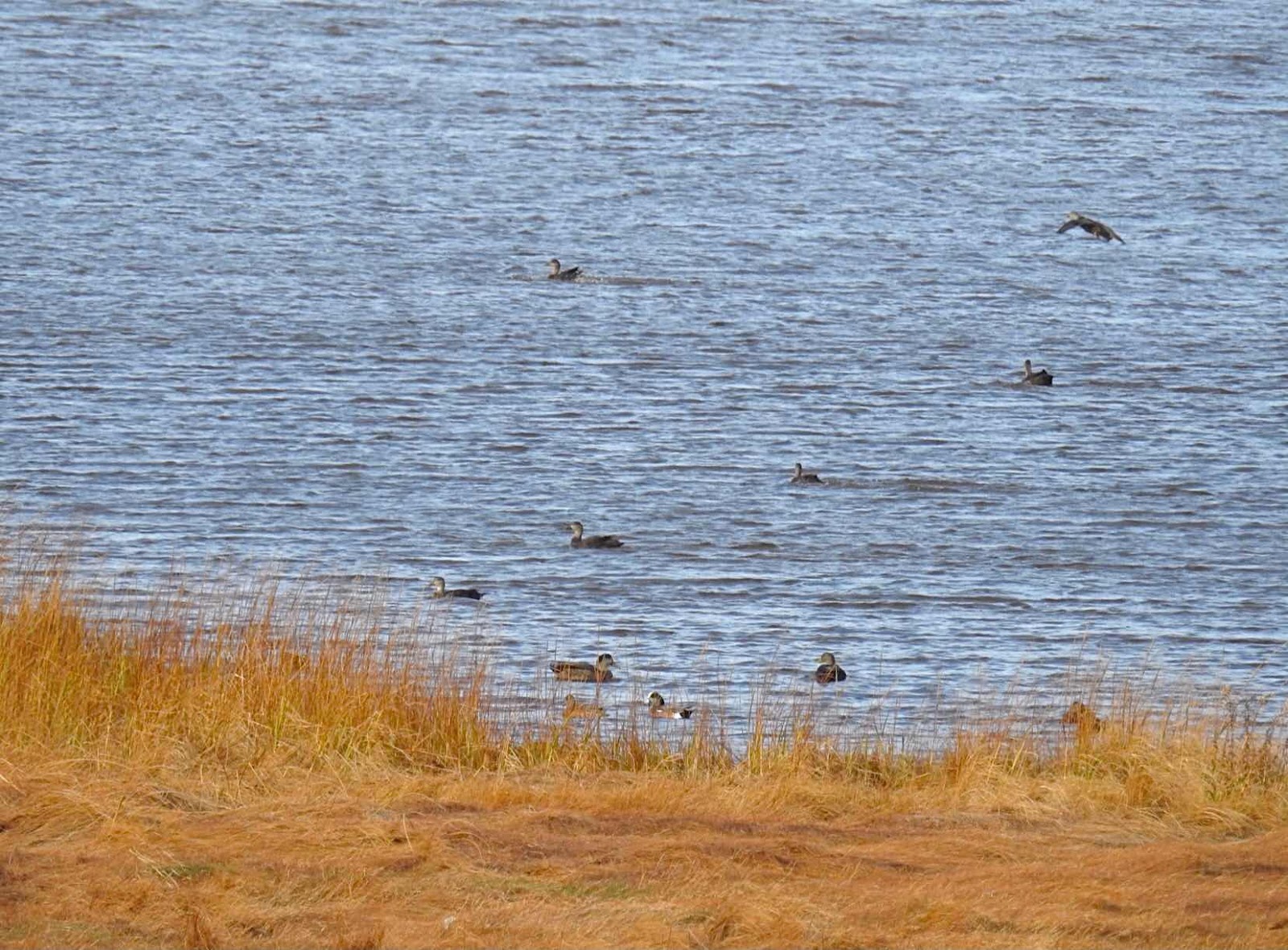 Meanwhile these two beautiful horses across the street came to the barrier to see the strangers looking at the birds. They wanted their photo taken too. Such curious creatures! 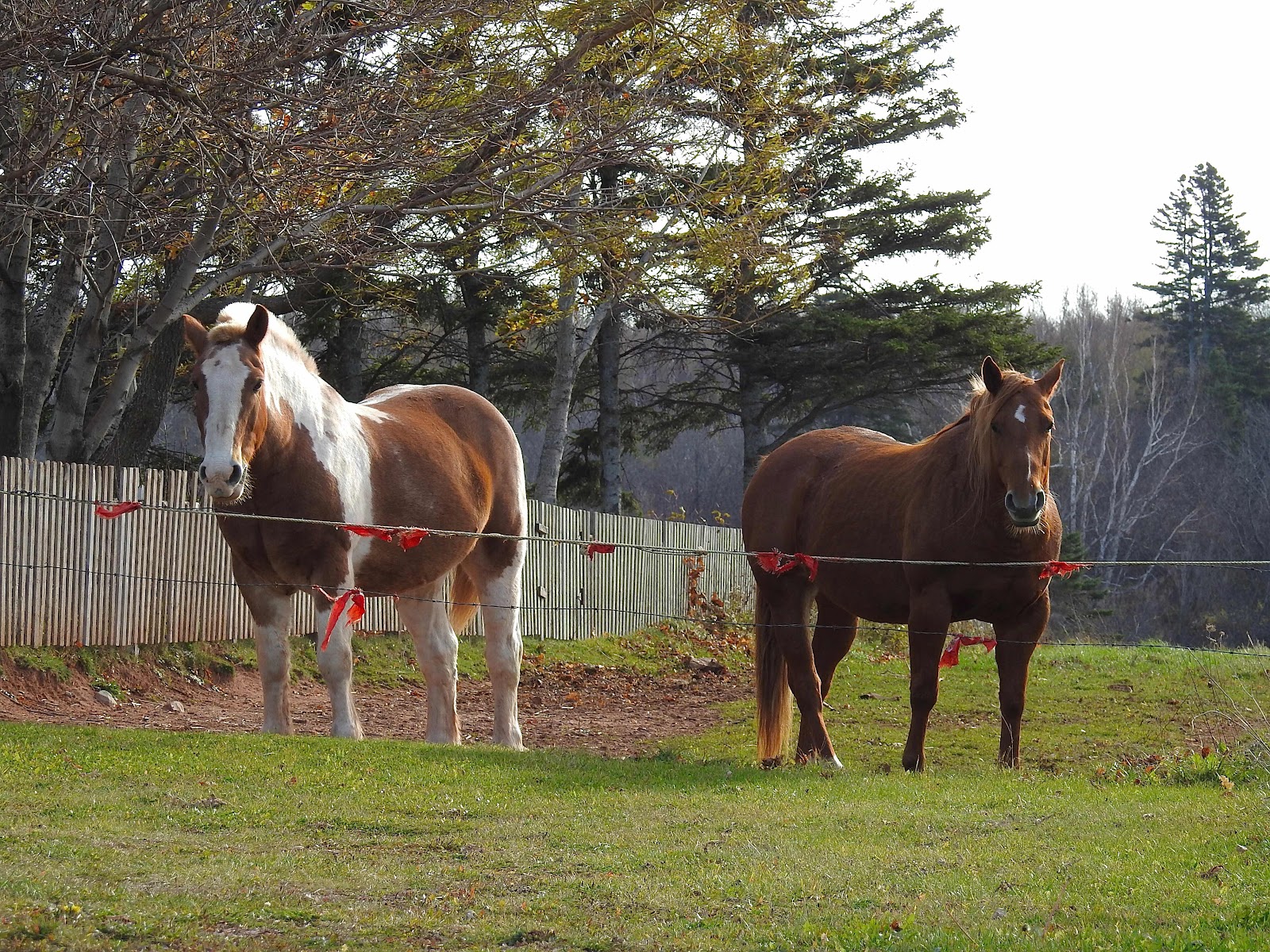 At Skinners Pond we walked the path to the beach, where the damage to the dunes in the distance was obvious. We later drove to Norway, Prince Edward Island, the site of the wind turbine farm hardly visible in the distance on the photo below. 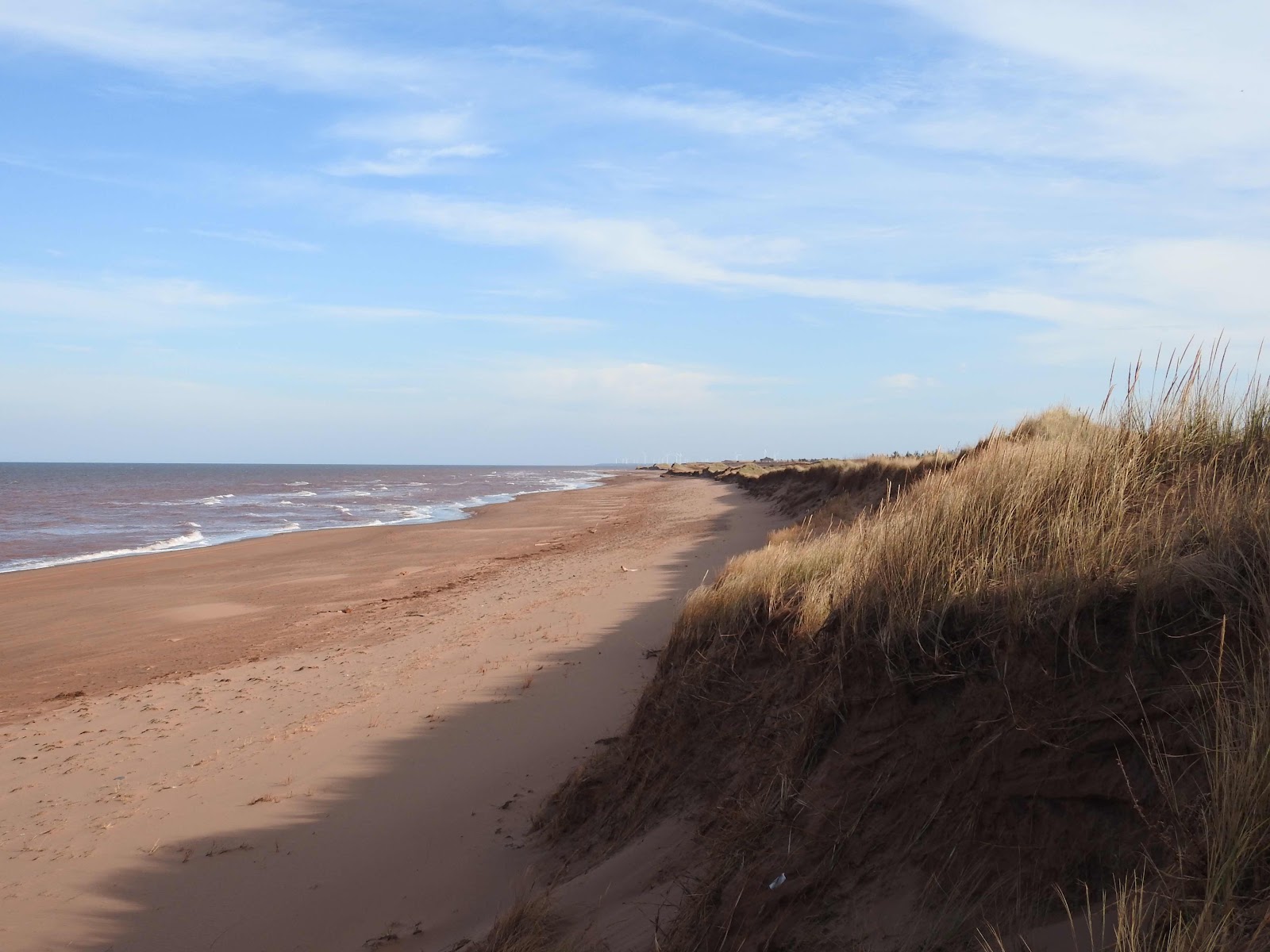 As we left Skinners Pond, we passed the Stompin’ Tom Centre where shows in the summer celebrate the life and music of the Canadian singer/songwriter. Tom spent part of his childhood at Skinners Pond. One of his most famous songs is Bud the Spud. 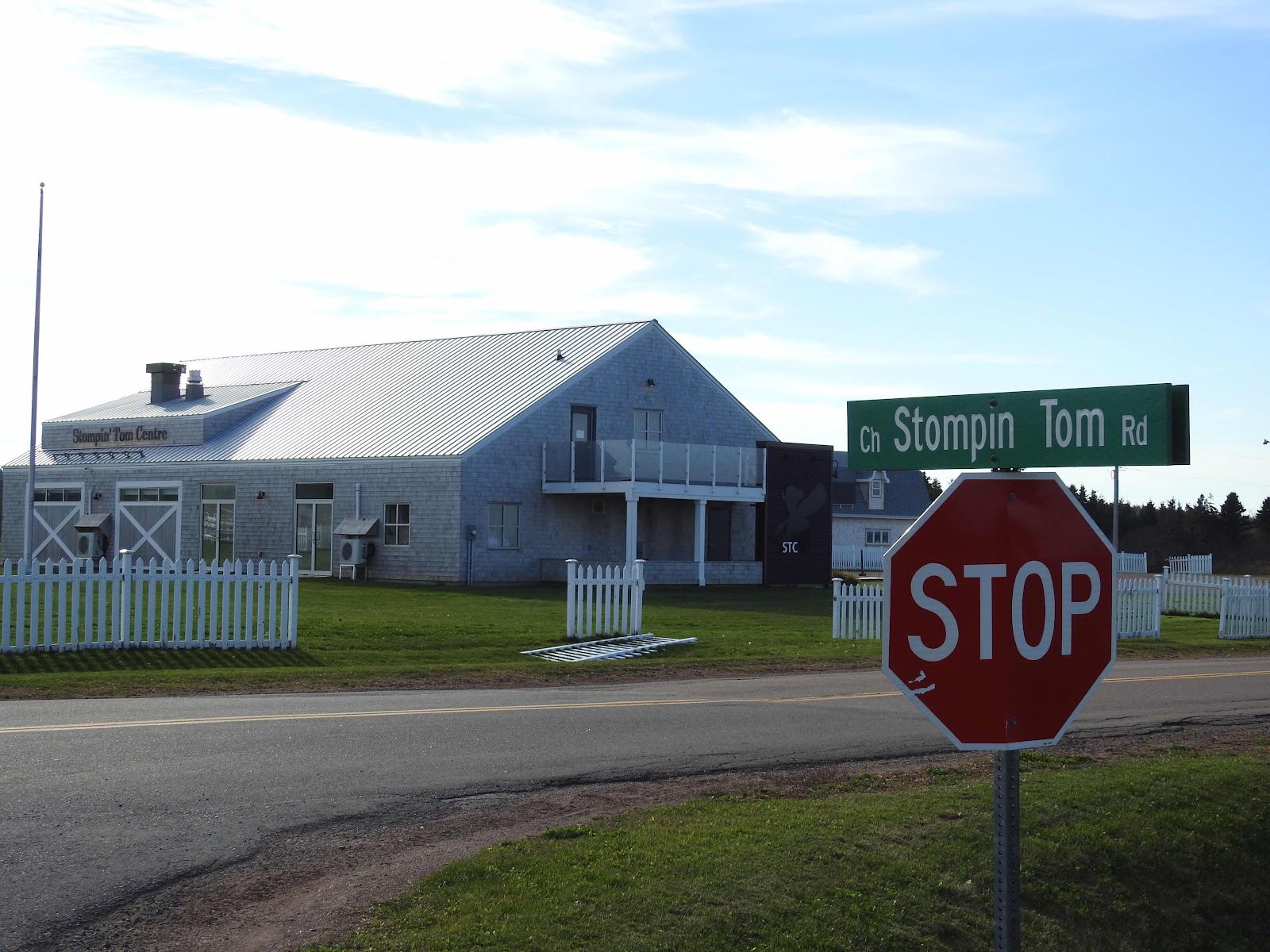 We eventually stopped at North Cape, at the western tip of the island. Here the waters of the Gulf of St. Lawrence meet the Northumberland Strait. That day, you could easily see where the waters meet. The Gulf waters are above the line which extends from the sandbar, water from the Strait is below. 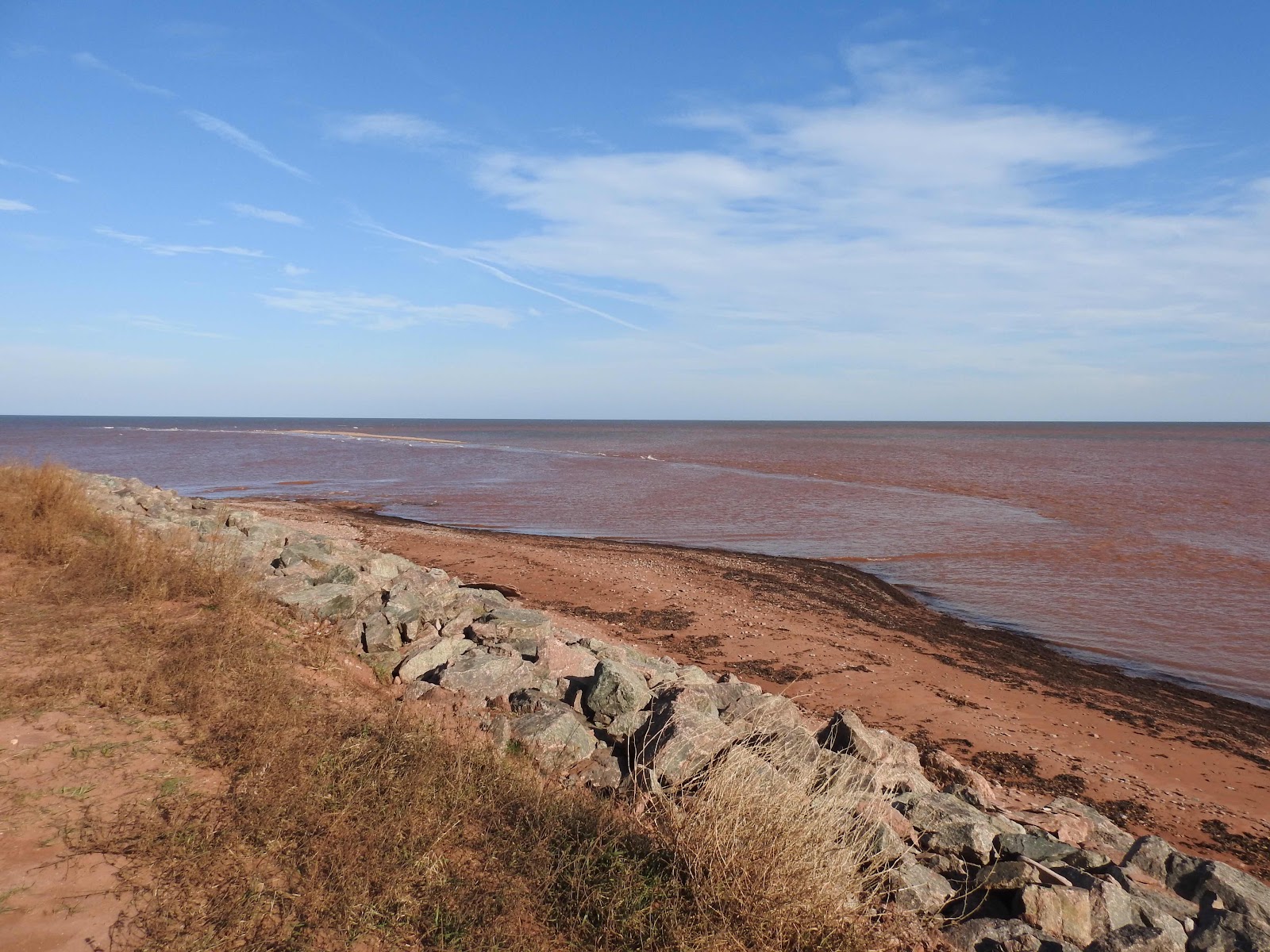 On that sand bar, cormorants and gulls hang out together. It was late in the season for cormorants to be about. Most are gone to warmer climes much earlier.
We had lunch near the start of the nature trail and had a good view of the lighthouse. 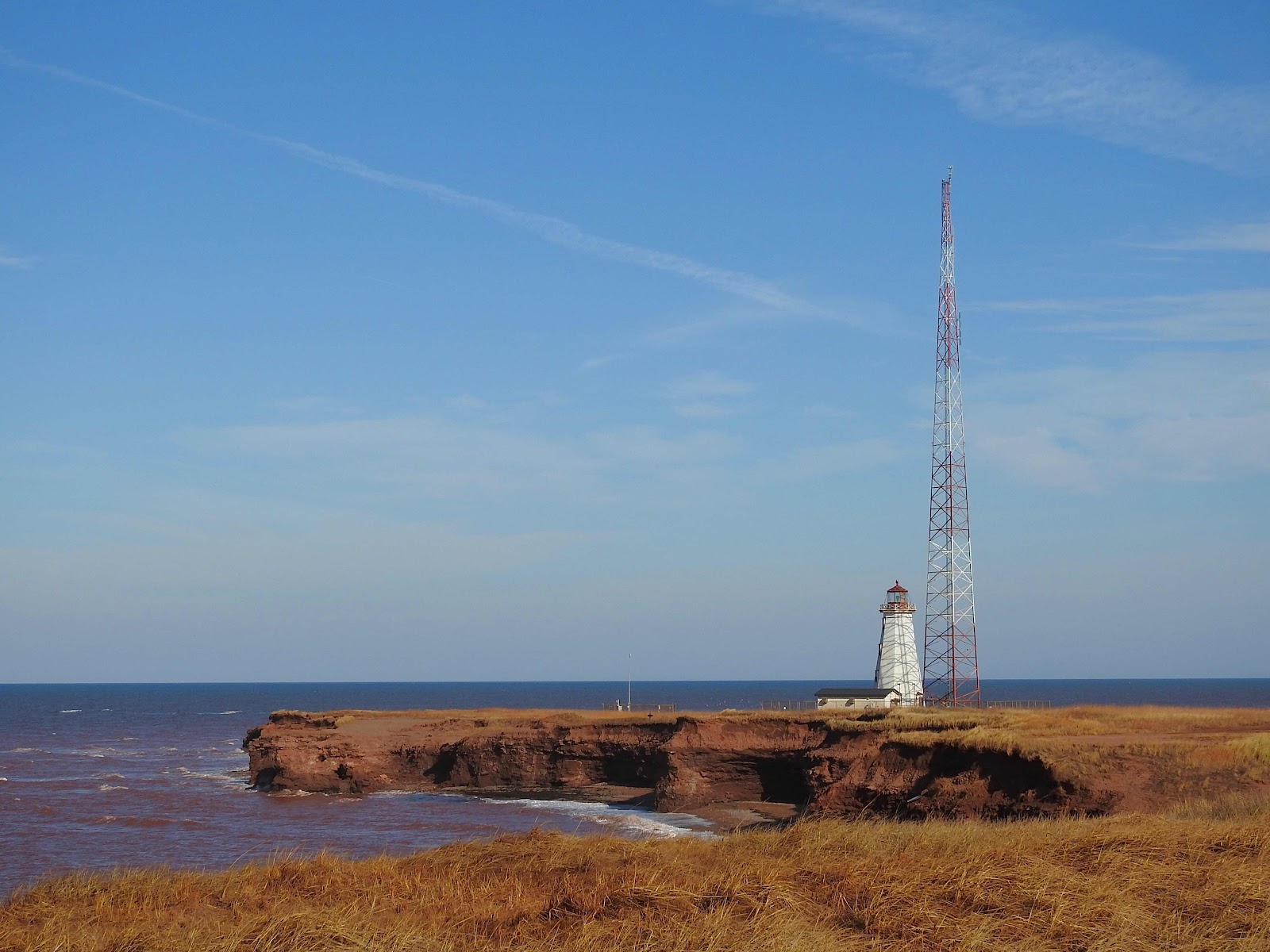 We walked along the coastline above the beach where a gully had eroded a great deal since our last visit, 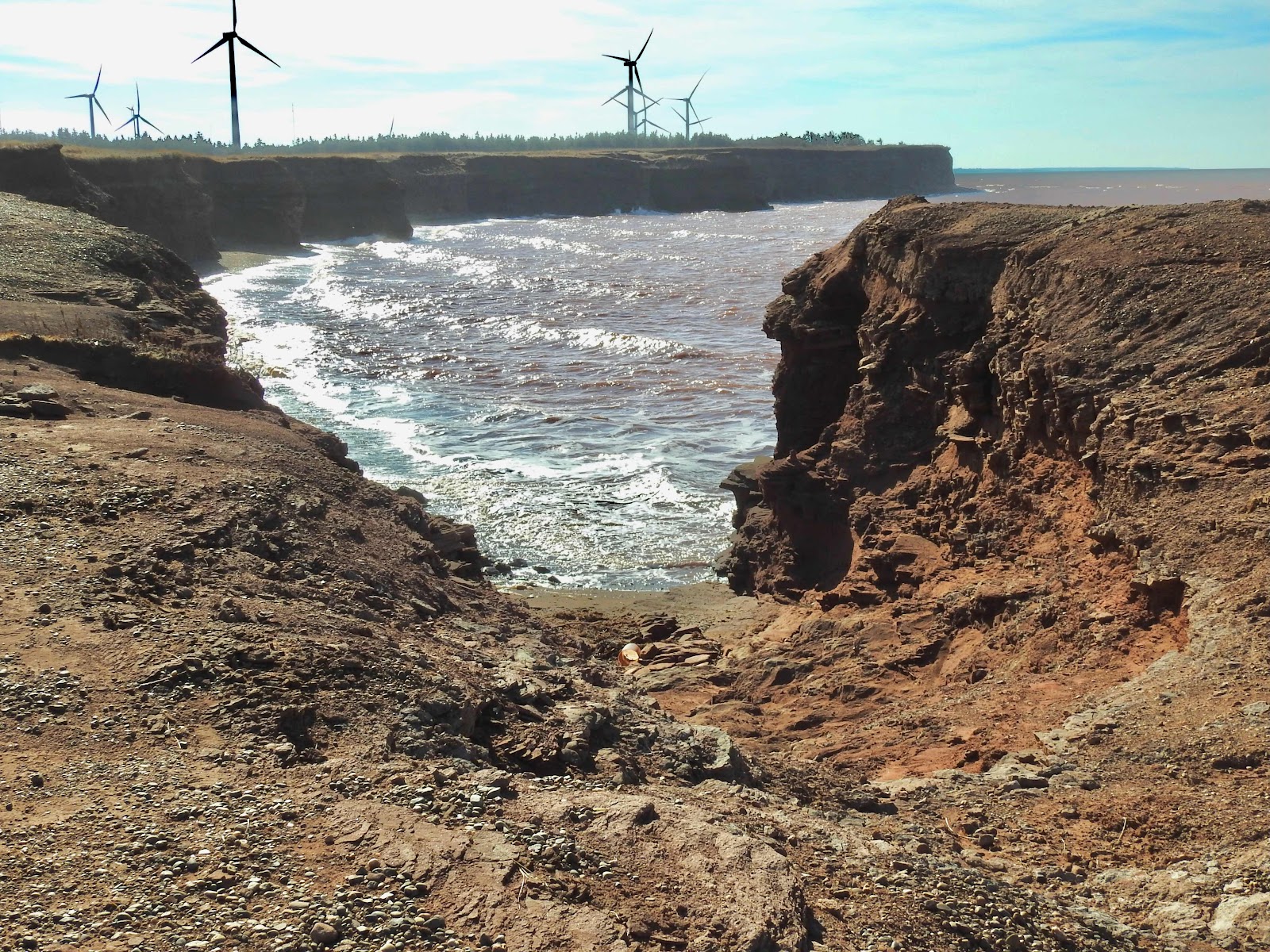 as had the sea arch, which could collapse any time. 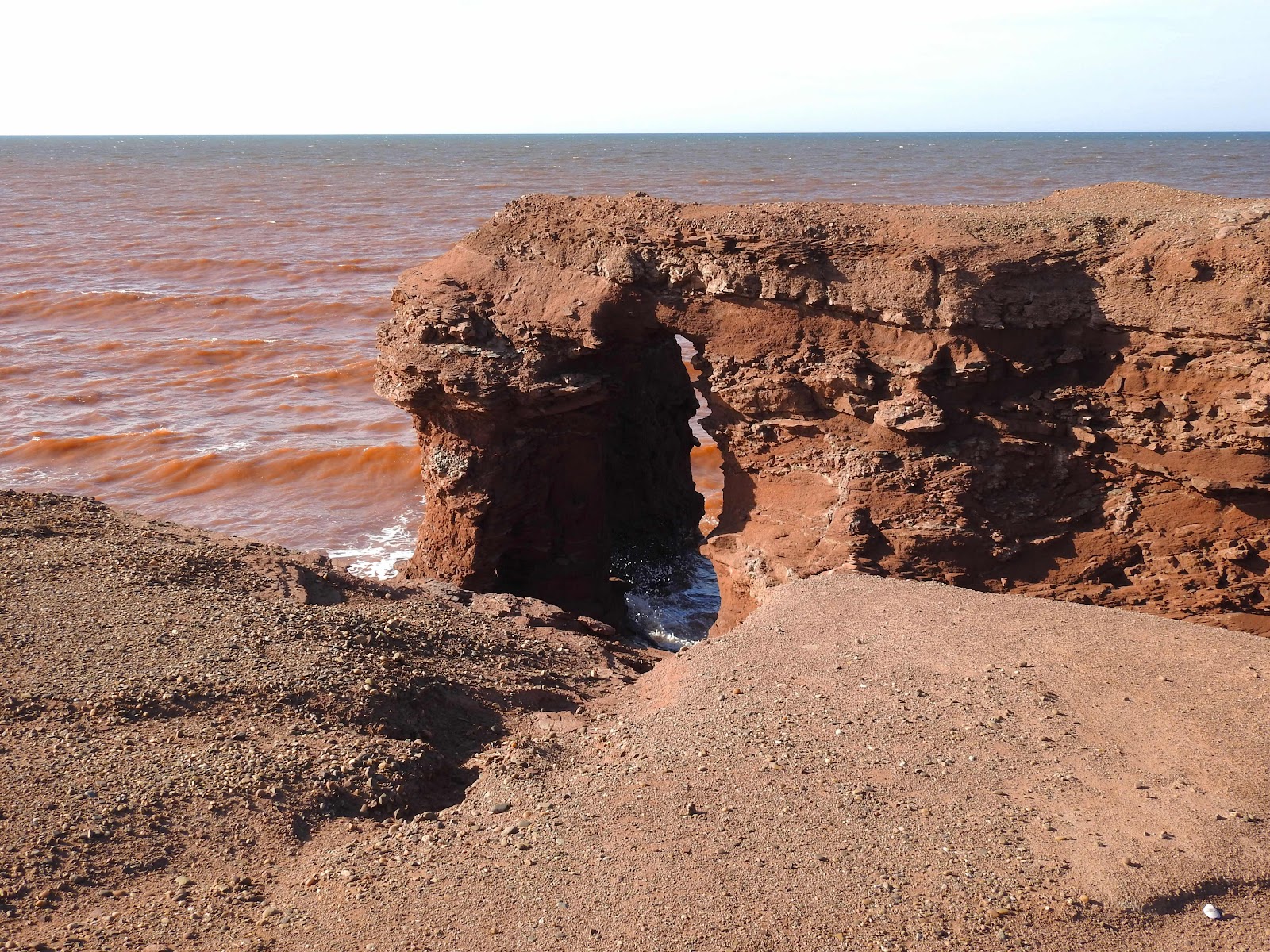 On our next visit to North Cape, we will walk the trail to the sea stack near Norway. Our next excursion will be closer to home however.

Wonderful pictures. The gully erosion is scary, like it could slide into the ocean any minute. Nice to see bare ground and green grass. Lovely horses

Those horses certainly are friendly.

Such beautiful heavy horses! If I make it to PEI again, I'll have to check out the Stompin' Tom Centre in Skinner's Pond. I missed that on my first trip.

A fine day in a beautiful spot.

Your walks are so delightful.
I'm glad you can get out and see the ducks and other birds.
Lunch and that view...what could be better?
Sue

I've never heard of Bud the Spud before - had to go listen to it on Youtube! (made me grin)
Great photo of the confluence of the two waters. I quite enjoy seeing where two different water bodies (seas or even two rivers) join together. Each has its own "personality" and watching them trying to mingle is always interesting.

Yet another delightful outing. That sea arch looks to be in imminent danger. I do hope that people stay well away.

I adore that 1st picture and can picture myself taking a short vacation in one of those houses. Perhaps in the summer though. :)

Hello,
I enjoy your walks at the coast. Beautiful views of the water and lighthouse.
Love the Mergansers, ducks and the horses. Take care, enjoy your day!

You live in a beautiful place and great photos. Glad you added in the horses.
Have a good day. Cheers Diane

How lovely to see these birds one last time before their migration.
The horses are friendly and in fine condition for winter.
I love the 'red' of the island!

A beautiful area and beautiful photos. Nice to see those pretty horses.

The water and the ducks are so pretty. Very peaceful read and visit. I agree with autumn. Same here. We get snow in the fall and also Indian Summer. Our winters come early though. Way before the calendar decides it so.

That's a beautiful afternoon out.

I always love to see your beautiful environment. And those gorgeous horses!

Such beautiful photos! I don't know that I will ever get there in person - so I love these opportunities to visit through pictures:) Thanks for taking us along! I must say my favorite is those "nosy horses".....just wanting to join the fun!!:)

Lovely photos! I do need to return to the island someday. We did a bit of driving and found our way to the beach one day, but mostly spent our time in or near Charlottetown. It was lovely, but I now realize we missed so much. Unfortunately one of our party was ill and we had to hurry back to Moncton to put her on a flight home.

Such beautiful pictures!love the sandy beaches🥰

It is always fun seeing new birds, especially when they are waterfowl which as you know are a passion of mine. Widgeon are quite common where we hunt in North Dakota. It is interesting to see where else they are.

How very, very interesting is your comment on my blog today. Thank you for your view. I'd love to be able to talk about this topic with you. Really would love to be able to. You of course, are so much closer to it, than I am, living where we each do.

what a great excursion, with lots of beautiful areas to explore!! awesome captures of the mergansers, they are my favorite winter ducks!!

gorgeous, well cared for horses. they are curious...they are hoping you have a carrot to share!!

I love critters, esp horses. Not sure you were following me 3 yrs ago but I had one. Love Misfire but she got too much for me to care for. I gave her to a friend.

Are you kidding me … I’ve lived 7 decades without ever hearing Bud the Spud. For anyone who hasn’t heard that the spuds are big on the back of Bud’s rig, check it out …
https://www.youtube.com/watch?v=9FqoiRgMpeM

Hooded Mergansers are among the most attractive of ducks. Miriam and I spent time looking at scores of the on Lake Ontario - Long-tailed Ducks too.

Thanks for taKing along my friend!
Enjoyed each bit of your walk thoroughly. There is story behind every single existence and the way you describe makes my day: )