While we were in Alaska, Prince Edward Island, on a recent excursion, we stopped at a boat launch area on a creek which empties into Percival Bay. The scene was peaceful on a still day, overcast without the glare of the sun. 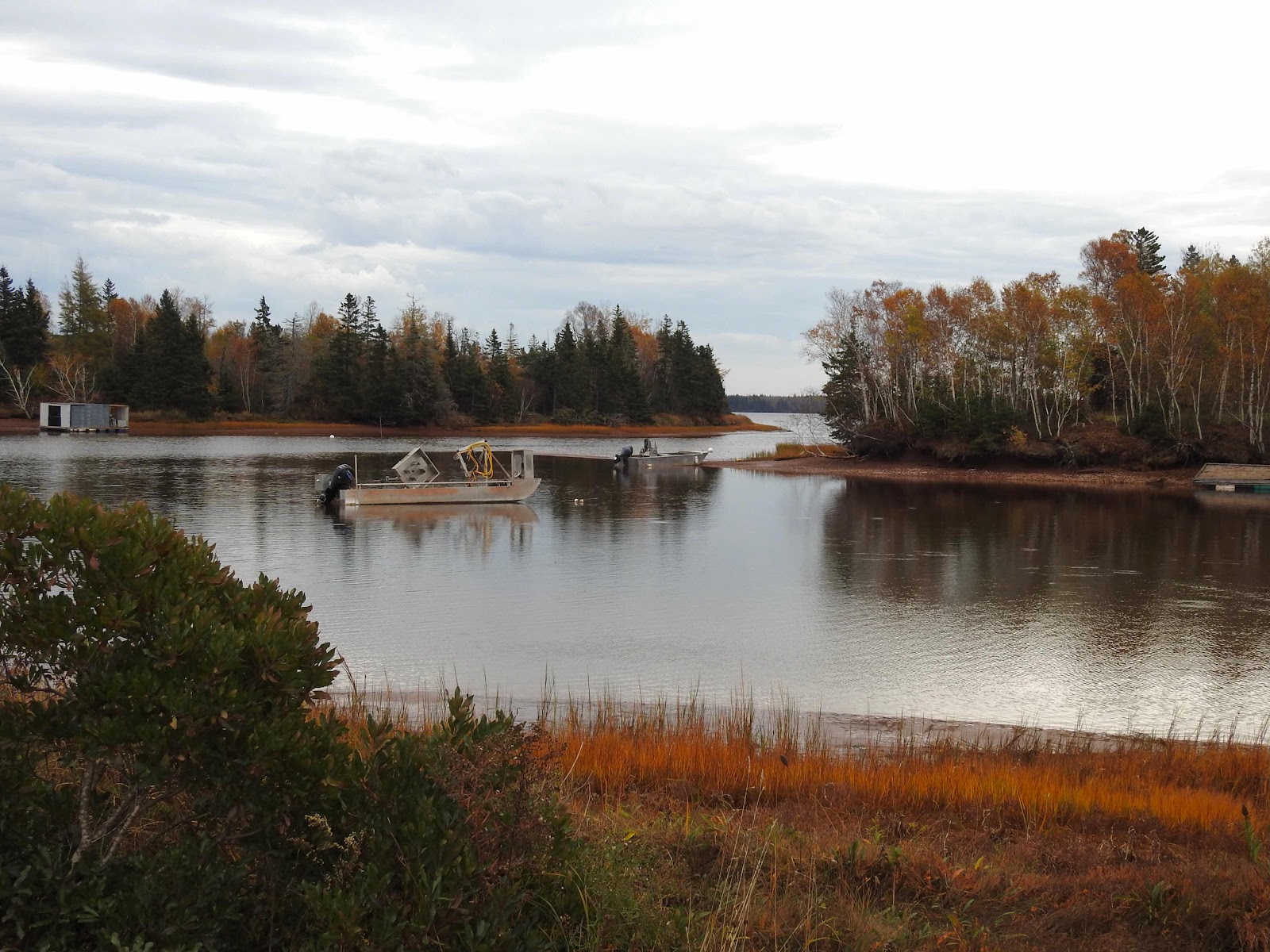 Oyster boats were moored in a protected area in the creek and around a bend, Percival Bay and the oyster beds were visible in the distance. 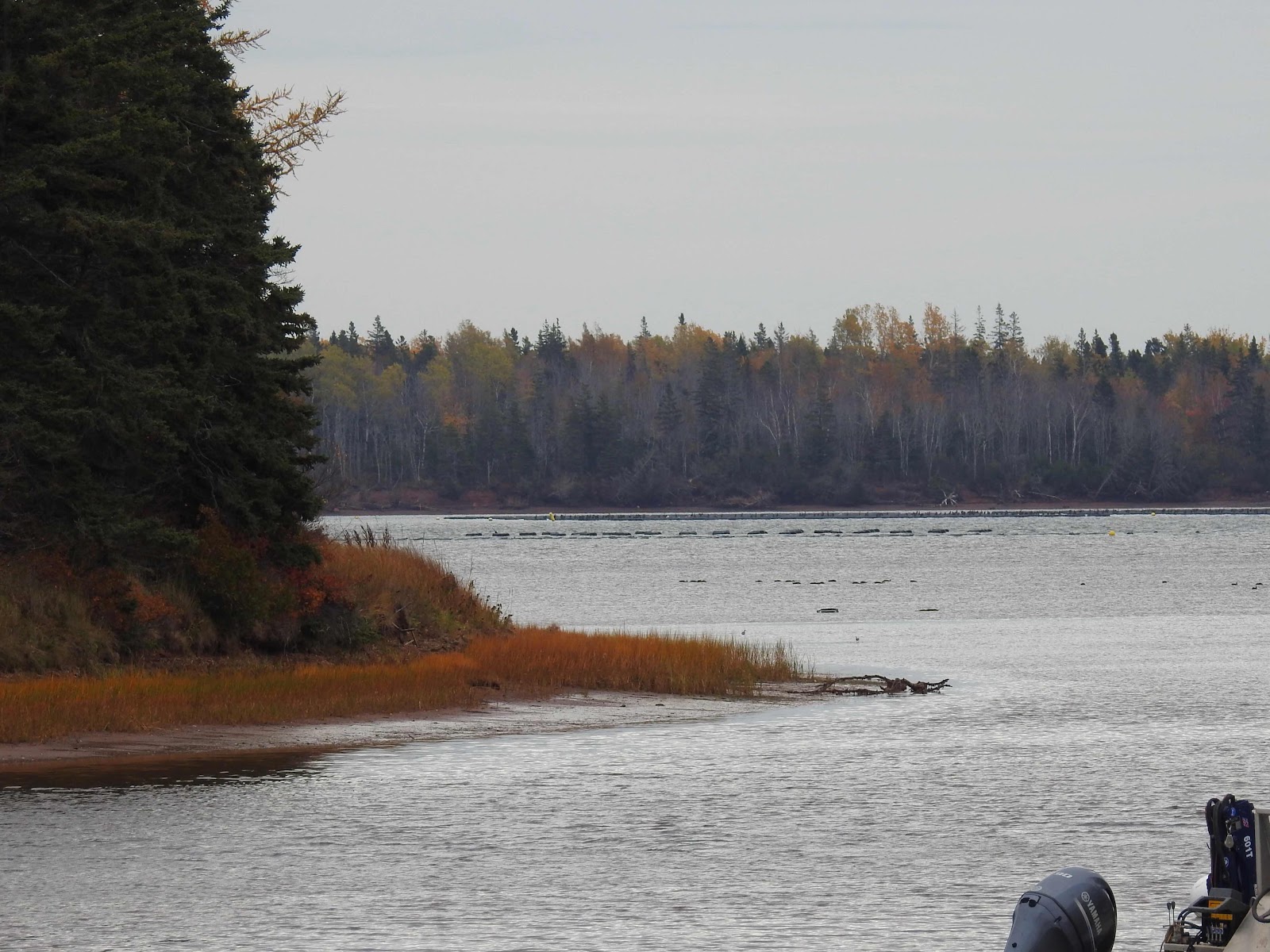 Nearby a muskrat went about his busy day. 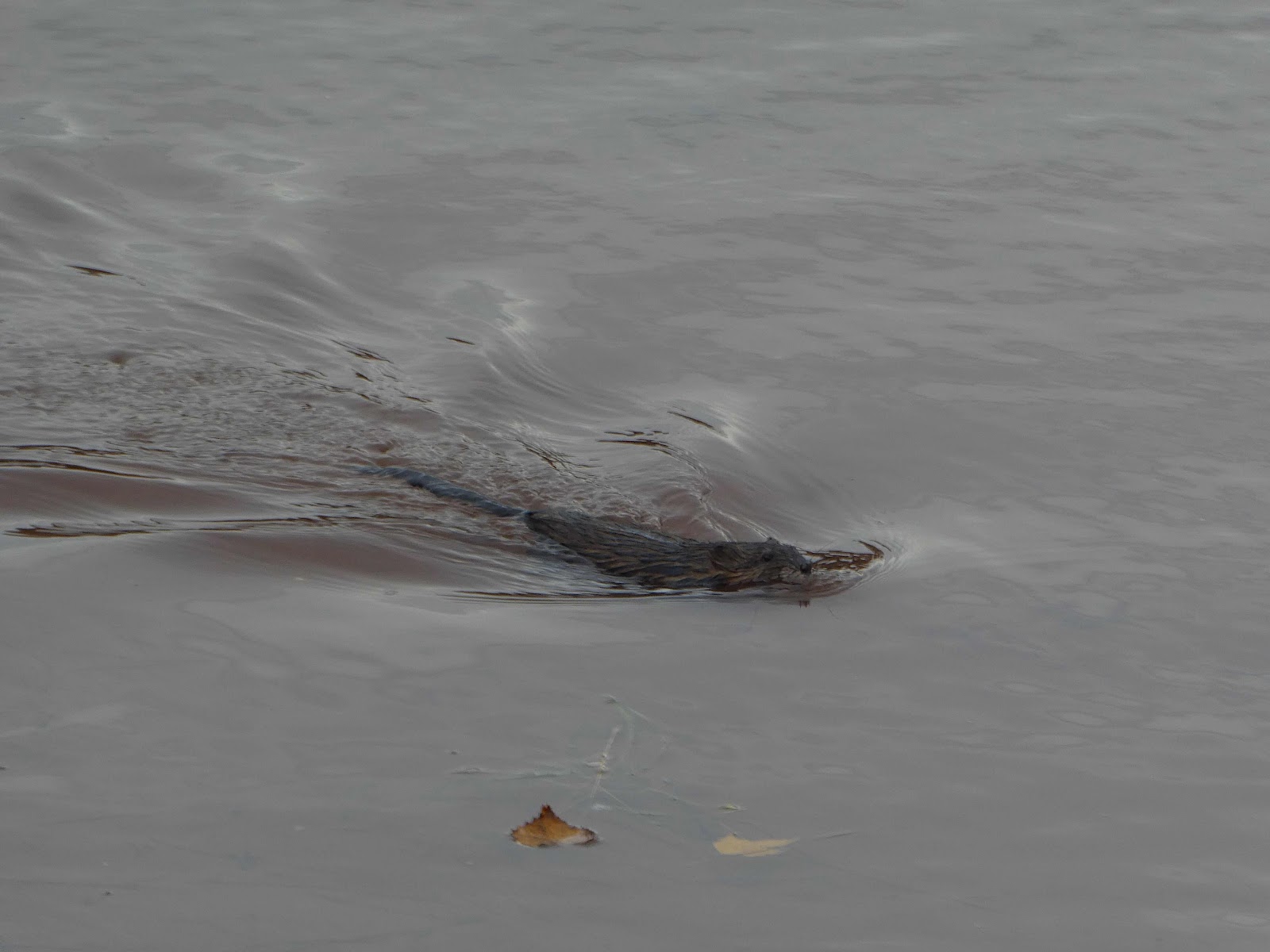 We were just setting up our table and chairs to have a picnic, when a car pulled into the area. It is a common experience in rural PEI when we stop in an area for someone from the area to stop by to check us out. We’ve come to expect it. This man pulled his car in next to ours and greeted us.

“Hello,” I said. May as well cut to the chase, I thought as I continued. “We’re from Summerside and we like to explore parts of the island we haven’t visited. It’s such a nice day and this is a beautiful area, we’re going to have a picnic here.”

My husband, taking the chairs out of the trunk didn’t hear the next comment.

I went  back and told my husband what the man had said and reluctantly he put the table and chairs back into the car and we followed this stranger.

The man drove up the road a few hundred feet and turned left to a path which led to several properties. Then he turned left again onto a field and stopped at the end of the field about a metre above the creek. The field was lined with trees, the white trunks of birches dominated. 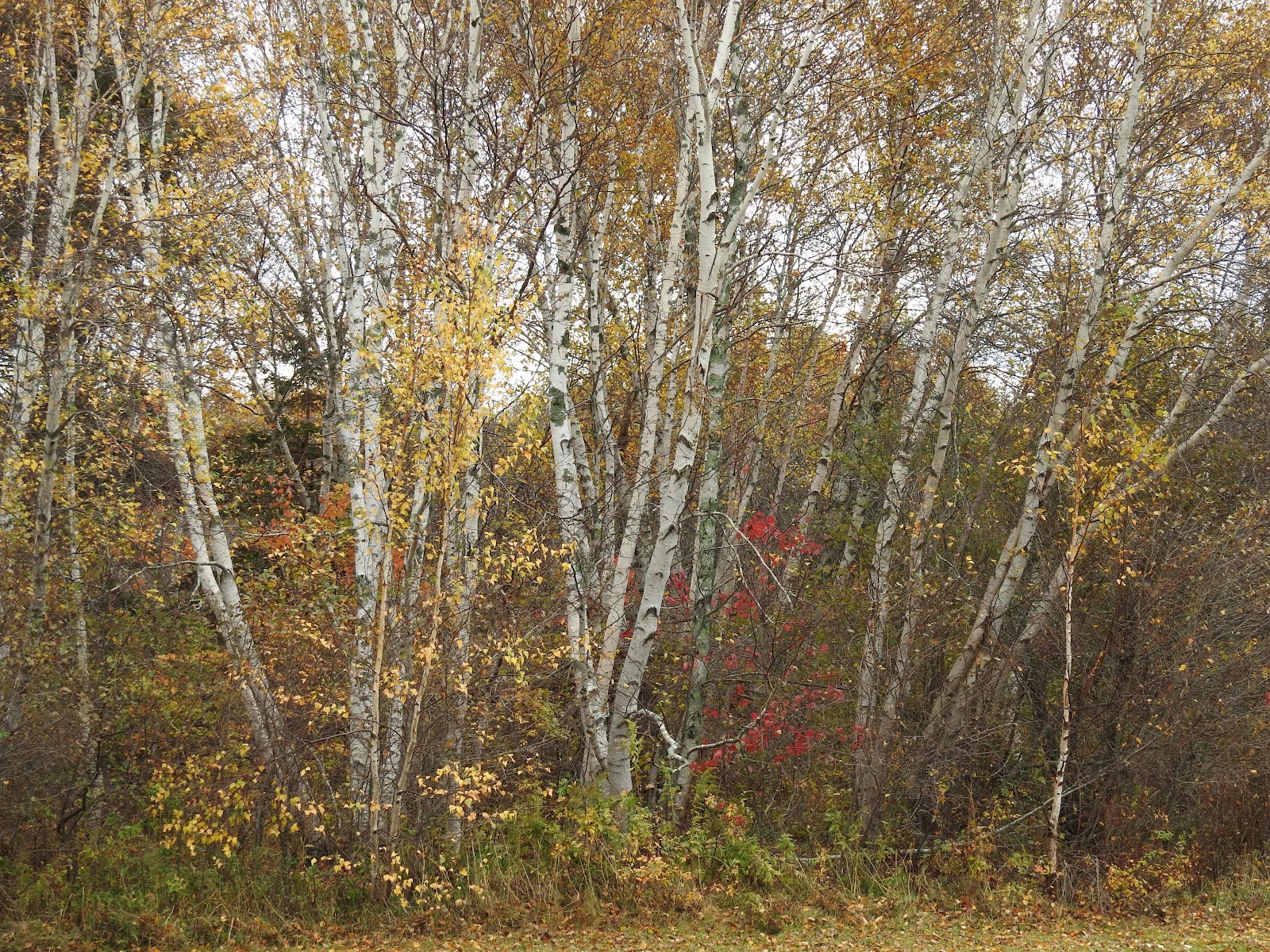 We chatted easily with the man who owned the property on the creek he’d brought us to. There were picnic tables, a swing set, a trailer and shed on the property. The man stays in the trailer in the summer so he can watch his oyster beds since theft can be a problem. He invited us to use the picnic tables, and enjoy our lunch there overlooking the creek. 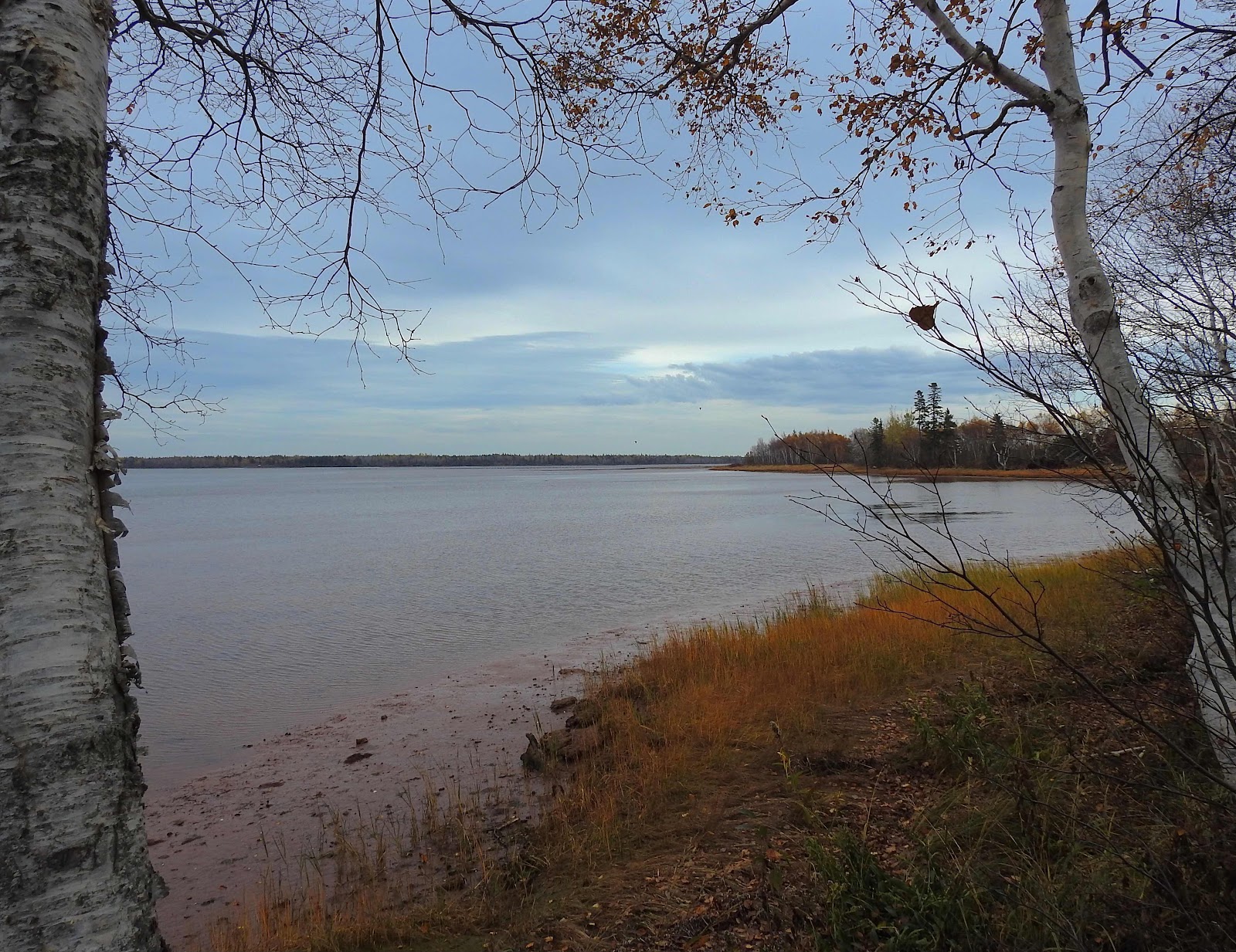 We shared our family history as he told us about his. He was a kind man, who shared his piece of paradise with us as he spoke of the oyster fishery in Percival Bay and the upcoming halibut fishery in which his son participates. We thanked him for allowing us to picnic on his land and he left us to our lunch.

It was humid that day and the mosquitoes were swarming under the trees. Rather than move a heavy table, we used ours in the open where the slight breeze helped fend off the nippers. Who would think to bring along insect repellent so late in the year?

We had creamed butternut squash soup that day, with cinnamon and ginger and the spices had gone through the soup made the evening before. Delicious. It is one of my favourite cream soups. A chicken sandwich went nicely with the soup and hot tea. 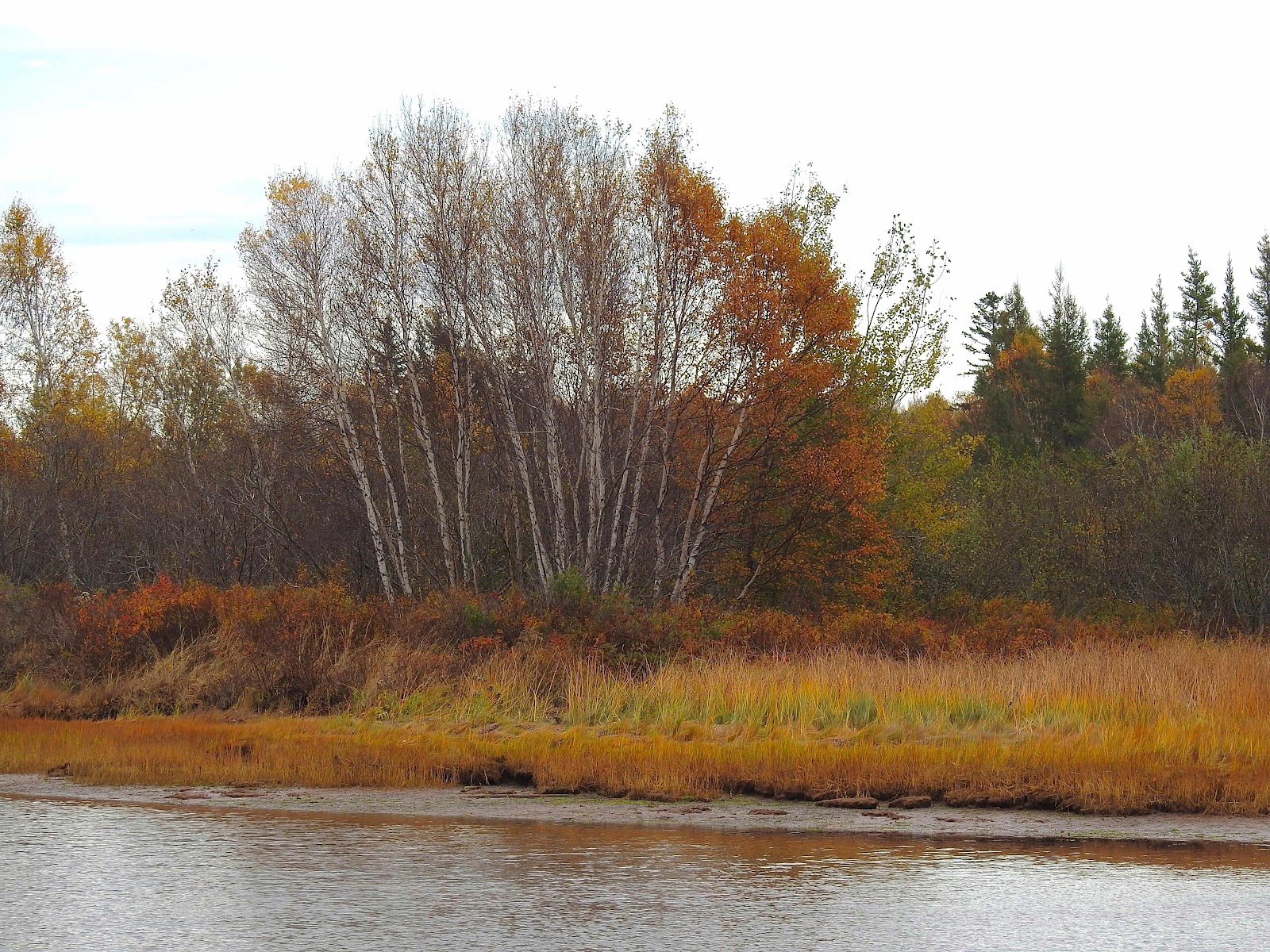 The peaceful setting filled the senses! I smiled as I walked.

Recently I spoke with my husband’s aunt who lives in a large Canadian city and I told her about “Follow me.” She laughed at our trusting nature in following a complete stranger to an unknown place. She related how she uses a walker when she goes to the nearby supermarket. One day a young man asked if she needed help in crossing the street and she turned him down. She is always on the alert for danger and doesn’t trust anyone she meets.

I wouldn't have gone with him either without a much fuller explanation. And perhaps not even then.

Glad it all turned out so well. I would have been suspicious, too. Great pictures! :-)

You are very Down East for sure.

Your lunch is incredible. We may have an egg salad sandwich and timbits. 🥸 Oh, and maybe chips.

There are still wonderful people in this world.

Your relative sounds like my big city sister, who was amazed and horrified when I chatted to strangers in my small town! Returned greetings even, shock, horror!

He sounds like a generous man who recognized nice people when he met them.

I love your picnic lunches.

Which is why we live where we do. Places where one is no afraid to talk to a stranger or even follow him down a secluded path to a previously unknown gem.

It is hard to know these days who to trust and who not to but it seems you did the right thing.

Butternut Soup is our favourite as well, but my South Africa Recipe on my blog has apple and orange flavours with a mild touch of curry, it is amazing.

He could have explained first! But what a nice man.

Your island is truly magical.
What a wonderful time you were given by that gentleman. A perfect spot for your lunch and I might add..you provided a bit or bite of lunch for the mosquitos too..(:0)
Sue

I am very glad that your trust was not misplaced and that you benefited from the kindness of strangers.

What great place you to live. I no longer go walking alone much, things have changed so much here. The beauty around you is amazing. Thanks so much for sharing it.

My first reaction would have been similar to your aunt. Perhaps had he walked the short distance but to follow him in my vehicle is something I would very much have hesitated to do. Glad it worked out and you had a lovely spot to enjoy your lunch.
The first and last photos are both breathtaking!

It was delightful to hear about a stranger sharing his piece of paradise with you. A story you will always remember.

I would have followed. But that's how old I am.

That could happen around here too. Rural is a wonderful feeling, sometimes.
as usual, love your photos.

A perfect day on the friendly isle!
A delicious al fresco lunch and gorgeous autumn colours, spoilt only by the nipping mossies.

What a neat post and I love the pictures. Great story! That last image has got to be a contest winner!

PS Forgot this ... I have to be curious about a town on PEI named Alaska. I wonder if those who named the town had seen Alaska and thought it looked similar in PEI? In some ways, it sure does. :-)

I'm glad that the stranger was nice to you. Maybe we, rural people, are simply more trusting. Autumn is amazing on your island. I love the pictures.

Your trusting nature really paid off. A nicely told story. Here in the city, I wouldn't follow a stranger unless they gave me a very good reason to do so!

WoW...how wonderful!! the locals are always the best, what a great encounter and such a beautiful area. your pictures are so pretty, i enjoyed seeing the little muskrat!!

First of all, I had to read "Alaska, Prince Edward Island" twice...maybe even 3 times. Then you had me staring at those gorgeous birches. Then it was "Follow me." You are a great story teller, Marie, and I love the photos you add to enhance what you write!

I admit the thought of safety also crossed my mind. It can sometimes be hard to tell a genuine friendly person from a conniving one, but instinct (that nebulous gut feeling) usually comes to the rescue. I'm glad your adventure turned out so well - what a beautiful spot for a picnic :)

What a wonderful experience. Truly, most people are kind. The scenery is so beautiful with the calm water and autumn colours. Your soup sounded delicious!

It sounds like Island life is unique. I doubt I would have followed so easily and trustingly. It's a wonderful story and encouraging that there are still nice and safe people. I live in an area that I would be much more suspicious. Beautiful photos Marie.

What a wonderful person to do that. You are certainly blessed with great citizens.

I can imagine Freya Stark nodding knowingly and saying, "Good on you for trusting."

Great scenery, a nice encounter with a stranger, and a delicious picnic!
Life is good on your island.

what a nice fellow he was! it looks so peaceful there. what a nice day you must have had.

The follow me one reminded me many thriller movies I saw about serial killers at once but i also feel that faith rooted so deeply in us turn so muany negative things in good for us miraculously as nature has sharpest sensors.
He proved kindman with good heart! Wold bears good and bad to make balance.
Mesmerising images specially last two.
You had glorious day my friend

Hello,
Wonderful story, it is nice to hear there are nice people in the world.
It is hard to trust strangers, I am glad all turned out so well. Your picnic sounds nice, pretty views. Take care, enjoy your day! Have a great new week!

I confess, I would be reluctant to follow him.
You both met an interesting person after all and had a very pleasant day.